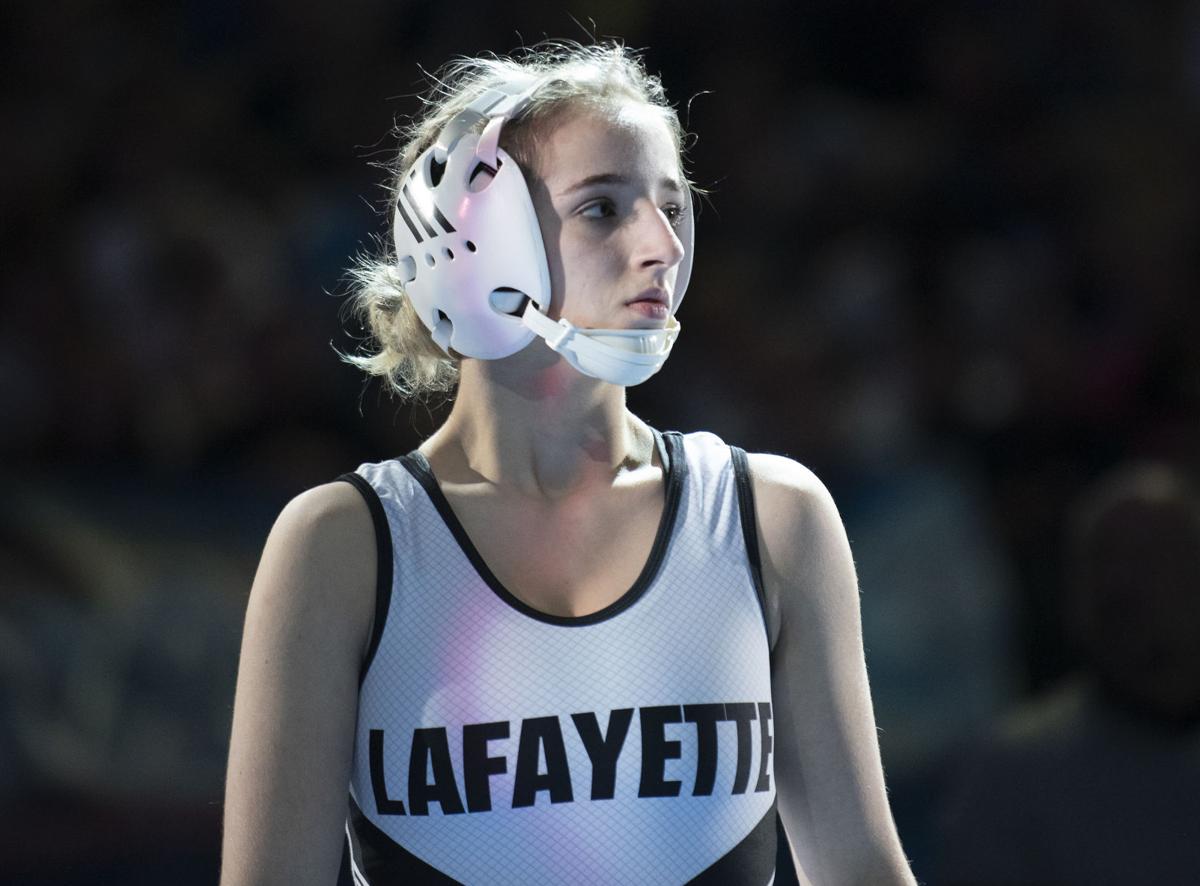 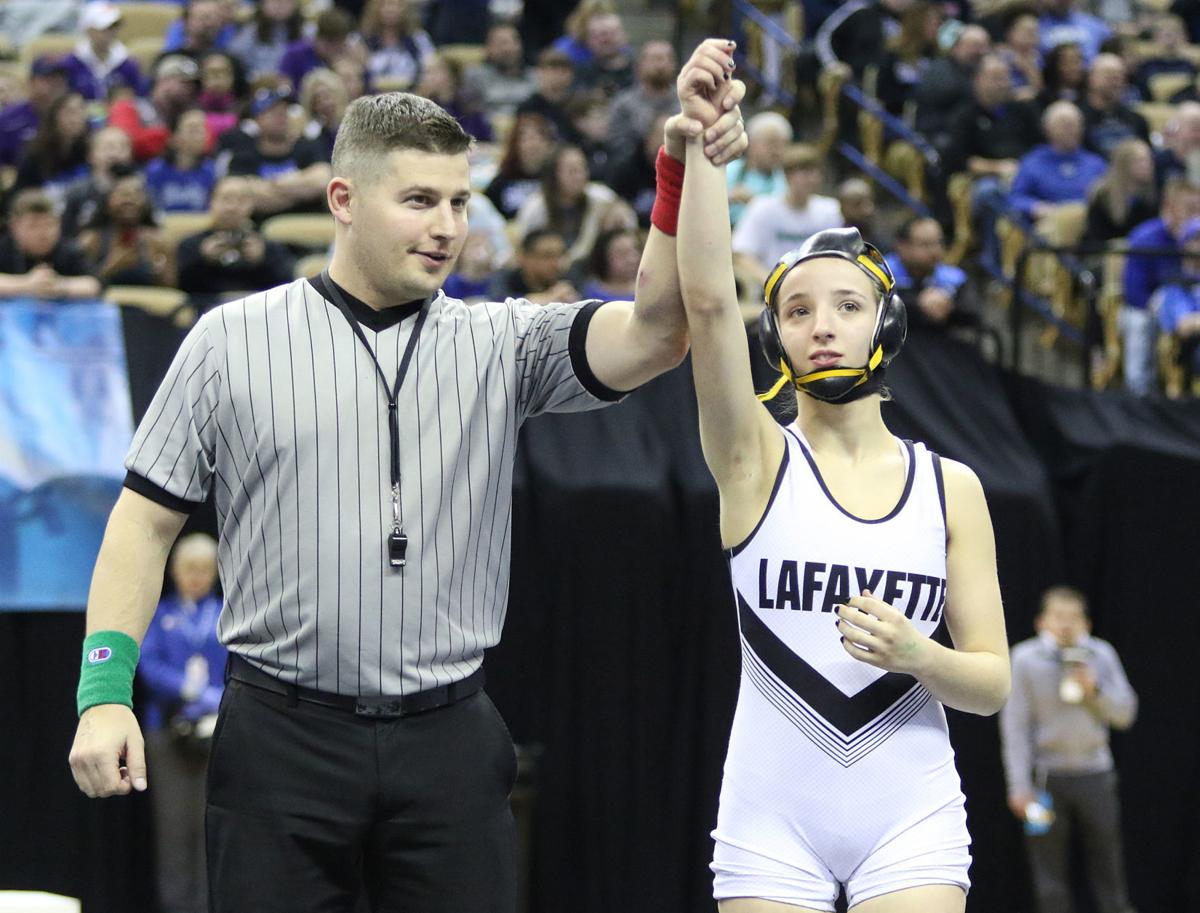 Lafayette sophomore Faith Cole has been the most dominant wrestler in the short history of girls wrestling in Missouri. She has compiled an eye-popping 55-0 mark over the past two seasons. Cole is the Post-Dispatch All-Metro girls wrestler of the year. 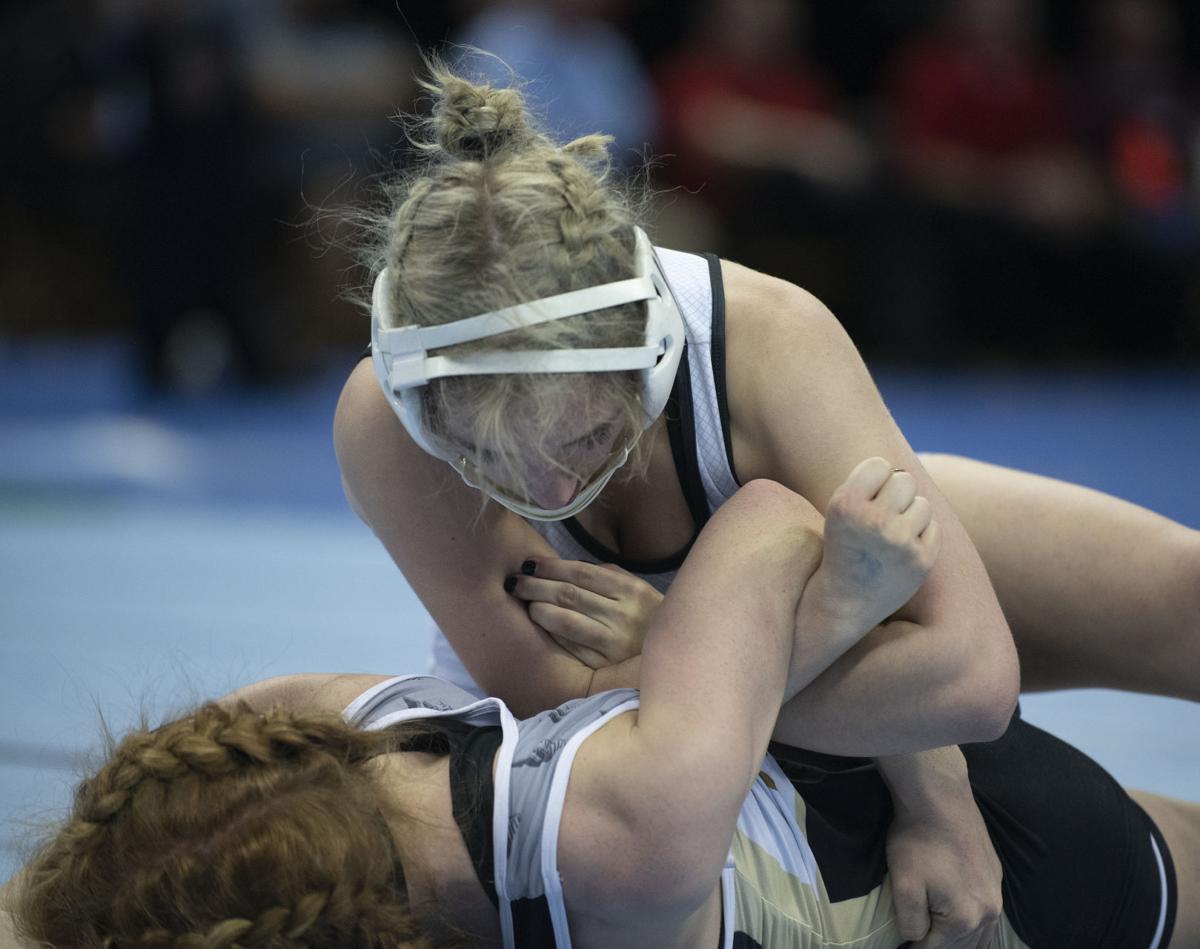 Eventually, in the not too distant future, Faith Cole will run out of colors.

The Lafayette High sophomore wrestler likes to celebrate every landmark win with a change of hair tint.

“You can call that one of my hobbies,” the two-time state champion said. “It’s one of my favorite things to do.”

Changing the hue of her hair, along with dominating matches at an alarming rate, is what makes Cole tick.

She switched to what she calls her current “greyish-blonde” look a month ago after winning the state championship in the 110-pound division at the Missouri state meet in Columbia.

The year before, when she captured the 103-pound crown, Cole went with a red/black style.

“I can’t count how many times she’s changed her hair,” explained her mother, Sara. "It makes her happy, so we just let her do it whenever she wants.”

Cole has gone with purple and even red streaks after regular-season tournament titles.

She celebrated the biggest win of her career — a first-place finish last summer in the prestigious United States Marine Corps Cadet Under-16 championships at Fargo, North Dakota — by cutting her hair and adding pink highlights.

“I can’t keep up with it,” said her dad, Jesse, a former state wrestling qualifier at Oakville High.

The 15-year-old Cole has been dominant in the short history of girls wrestling on the high school level in Missouri. She has compiled an eye-popping 55-0 mark over the past two seasons.

But it's not her unbeaten streak that stands out. It is the dominant way she has racked up win after win. An astounding 53 of her victories have come by either pin or technical fall (a triumph of 15 or more points). No one has even come close to beating her. Cole’s tightest contest this past season came in the championship match at Mizzou Arena, where she overpowered Lilly Brower of Excelsior Springs by a decisive 11-2 count.

Cole is the Post-Dispatch All-Metro girls wrestler of the year.

“There’s that internal drive that she has that very few others have,” Lafayette coach Berenice Blanco said. “Even though she wins, and usually easy, she’s not always satisfied with that. She wants to get better. I can’t count the number of times she’s won a tournament and she’ll come back to me not happy because she didn’t meet the high standards she’s set for herself. That’s what makes her keep getting better and better.”

Cole is well-known on the national level, as well. Her performance in Fargo last summer turned heads. After winning the Under-16 title, she went on to finish second in the Junior division, which included some of the top Under-19 wrestlers in the country. Cole fell to Emily Shilson of Maple Grove, Minnesota, in the title match. Shilson, who is four years older than Cole, just completed her freshman season at Augsburg University by winning the Women’s Collegiate Wrestling Association national title at 109 pounds.

That performance earned Cole a trip to the United States Olympic Training Center in Colorado Springs. Cole worked out for a week with some the nation’s best female wrestlers and under the tutelage of top-level coaches.

The national exposure gave Cole the confidence needed to step her game up to another level. Now, she harbors Olympic dreams and even has the words "2024" Olympics, etched into the mirror in her bedroom.

Cole is not that far off.

“She has the mindset and talent to go a long way in this sport,” said Blanco, who fashioned a successful wrestling career at Missouri Baptist University.

Cole deflects a good majority of the credit for her rise to her father. She also honed her talents at the Purler Wrestling Camp under the direction of Nick Purler, a former NCAA All-American at Oklahoma State University. Lafayette boys coach Joe Wier also has contributed mightily to her growth.

She competed in her first match at age 8 and immediately fell in love with the sport. Cole and her family moved three different times, but she always used wrestling to fit into her new environs.

Cole likes to joke with her father about the two gold medals she owns on the high school level. Jesse qualified for state at Oakville but won just one match.

“I’ll never let him forget about it,” Faith said.

Cole, who sports a 3.6 grade point averages, takes her wrestling very seriously. The family has a group of wrestling mats in the basement of their Pacific home. She spends more time there than in her own bedroom, Sara joked.

“I hear everyone else taking about, 'Oh no, we have to go to practice now,’ ” Faith said. “But I can’t wait. I look forward to it. Every single time.”

Cole’s older sister, Emma, also is an accomplished wrestler. A senior at Lafayette, she finished second in the state at 152 and will continue her career at Lindenwood University.

Over the past 12 months, Faith’s stock has skyrocketed. The success at Fargo has put her name high on the list of college coaches throughout the nation.

Jesse said the key to Faith’s quick rise comes in her increased level of confidence.

“Before, she wasn’t totally sure about how good she was,” Jesse said. “Now, she goes out there thinking she’s going to win. On the biggest stages, she’s been shining the brightest.”

Cole is hoping to compete in national tournaments in Las Vegas and Dallas over the next few months to tune up for a return trip to Fargo later in the summer.

“I’m feeling like I’m the most blessed person I know,” Faith said. “Everybody, a whole number of family, friends and coaches, have helped me get this far. And I’m going to keep working hard so I don’t let them — or myself — down.”

Earned a third-place medal in state tournament at 142 pounds in impressive fashion by winning five consecutive consolation matches after losing opening bout. To top it off, Abdijanovic won the third-place match by pinning the same wrestler who had pinned her in the opening round. Abdijanovic finished 35-6 and won three individual titles, including the District 1 tournament.

State runner-up at 152 pounds to finish an injury-riddled 18-3 season that featured only one match before Jan. 9. Won Lafayette Fred Ross Invitational and District 1 tournament titles. Helped Lafayette to second consecutive runner-up team finish in state tournament. All three of her losses this season came by injury default. Plans to wrestle at Lindenwood. As a junior, Cole won state title at 143 pounds.

The inaugural Post-Dispatch All-Metro girls wrestler of the year enjoyed another stellar season. She posted a 47-0 record, capped by a state championship at 166 pounds, and is 82-0 in her career. Foeller's six titles also included the Affton, Fort Zumwalt East, St. Clair, Seckman and District 1 tournaments. Won 34 matches by fall, which was second-best in Missouri. Ranked No. 4 nationally at 164 pounds.

State championship at 152 pounds was highlight of five tournament titles and capped 29-2 season. Her other tournament victories were at John Burroughs, Union, Fort Zumwalt East and Lafayette's Fred Ross event. Also a standout catcher for the Webster Groves softball team, the state championship medal was her first after falling one victory short during her 20-8 sophomore season.

Finished third in state tournament at 135 pounds to finish season at 43-3 and career at 73-9. The final of her six individual titles came in the District 1 tournament, helping the Lions capture the team championship. Murphey's other titles came at Mehlville, Washington, McCluer, Hillsboro and Francis Howell's Kyle Thrasher. As a junior, Murphey was a state qualifier and fell one win short of a medal.

Earned a state tournament medal for second consecutive season, improving to a third-place finish at 166 pounds after finishing fourth as a sophomore in the 152-pound division. Schreiber went 34-6 as a junior and is 57-10 in her career for the Pioneers. She won three tournament titles (Summit's Sheri Lance, Fort Zumwalt East, Lafayette's Fred Ross) and was third in the District 1 tournament.

Finished third at state tournament at 130 pounds in her debut season. Posted a 39-5 record with four individual titles, which came at Union, Washington, McCluer and the District 1 tournament. She helped the Lions claim the district team title in the process, the first for the girls program. Background in judo helped Shaffrey make smooth transition to wrestling.

Debut season ended with a 29-5 record and a state runner-up finish at 125 pounds. Helped Holt to third-place team state trophy. Slaughter won three tournament titles, the Girls KC Stampede, Francis Howell's Kyle Thrasher and the District 2 crown. Slaughter pinned all five of her opponents while winning the district tournament and then her first three state opponents before falling in the final.

Made the most of her only season, finishing third in state tournament at 235 pounds and with a 25-2 record. Walker's four tournament titles included the District 2 crown in addition to triumphs at Lafayette's Fred Ross, McCluer and Washington. A Central Methodist signee, Walker debuted with a third-place finish at Battle's Wonder Woman tournament, losing only to eventual state champ Lexie Cole of Kearney. At state, Walker won three matches by decision and her semifinal loss was by one point in the tiebreaker phase.

Finished season with a 39-8 record by placing fifth in state tournament at 125 pounds. Clutter also was the District 2 tournament runner-up and won four tournament titles (Liberty, Gateway Athletic Conference, St. Charles, Washington). She had a 75-11 record in two seasons for Pirates.

Earned a medal in her first state tournament appearance, finishing fifth at 152 pounds. Posted a 27-12 record that included a second-place finish in the Gateway Athletic Conference tournament and third-place District 2 showing.

Won first two matches in state tournament before settling for a fourth-place finish at 135 pounds to cap a 30-11 season. District 2 champion also won tournament titles at Liberty and St. Charles.

Earned first state tournament medal by finishing fourth at 110 pounds to cap 38-3 season that included a District 2 championship, one of her seven tournament titles. Also runner-up at Battle Wonder Woman.

Lafayette sophomore Faith Cole has been the most dominant wrestler in the short history of girls wrestling in Missouri. She has compiled an eye-popping 55-0 mark over the past two seasons. Cole is the Post-Dispatch All-Metro girls wrestler of the year.