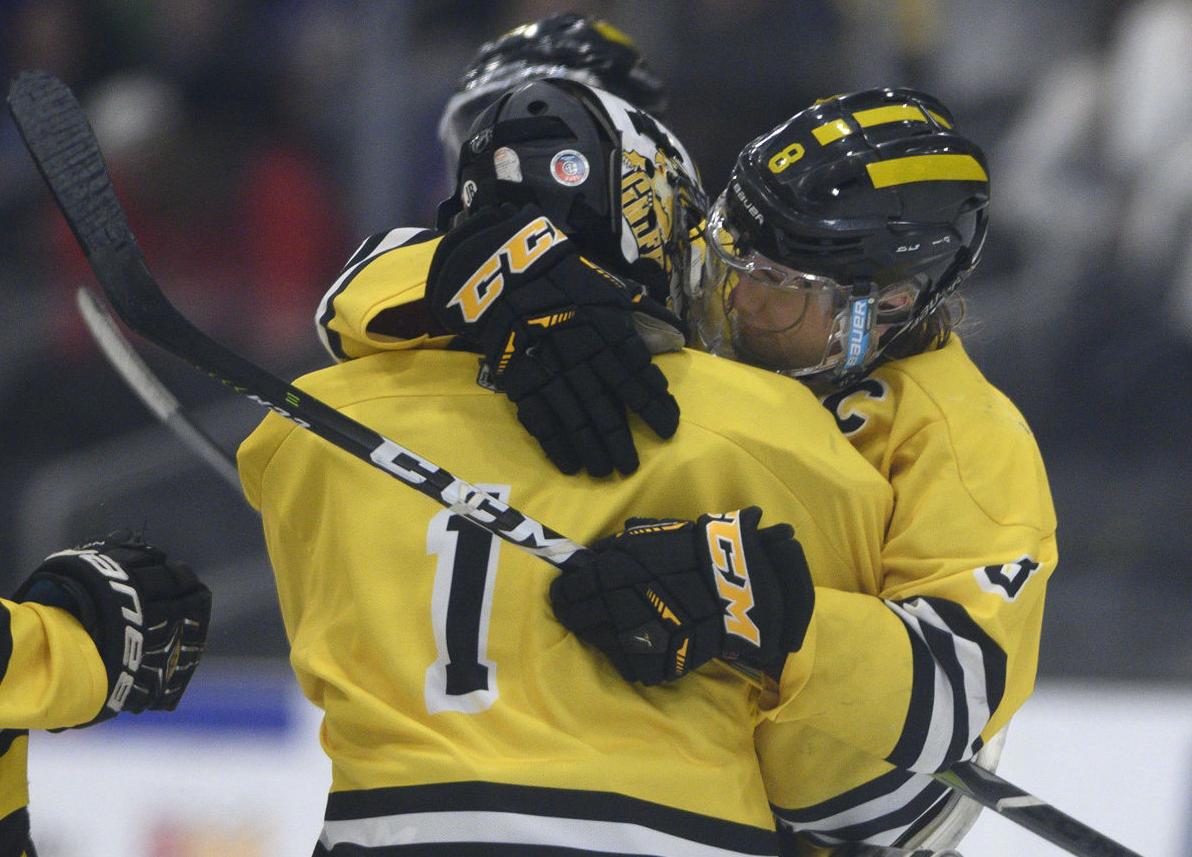 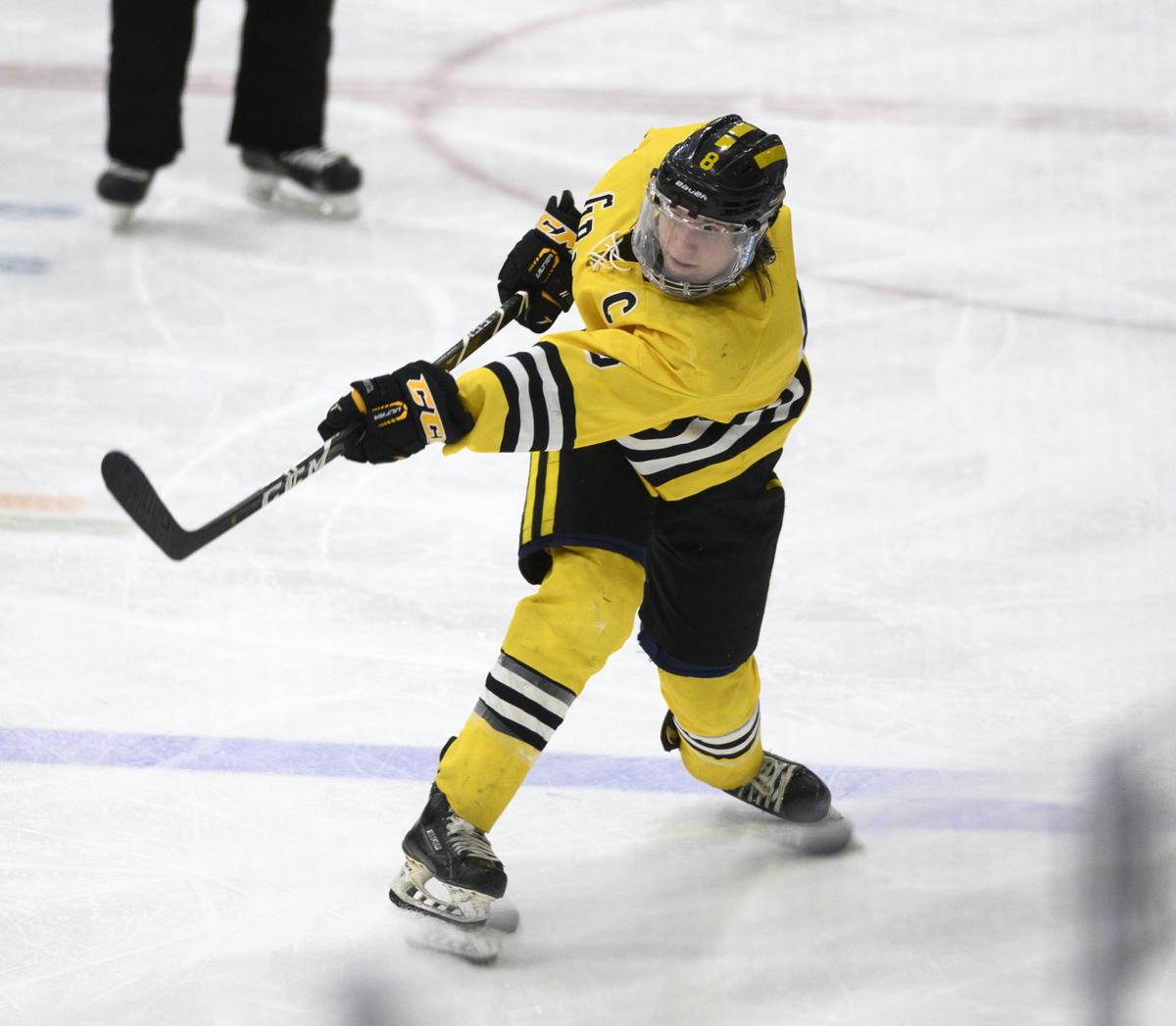 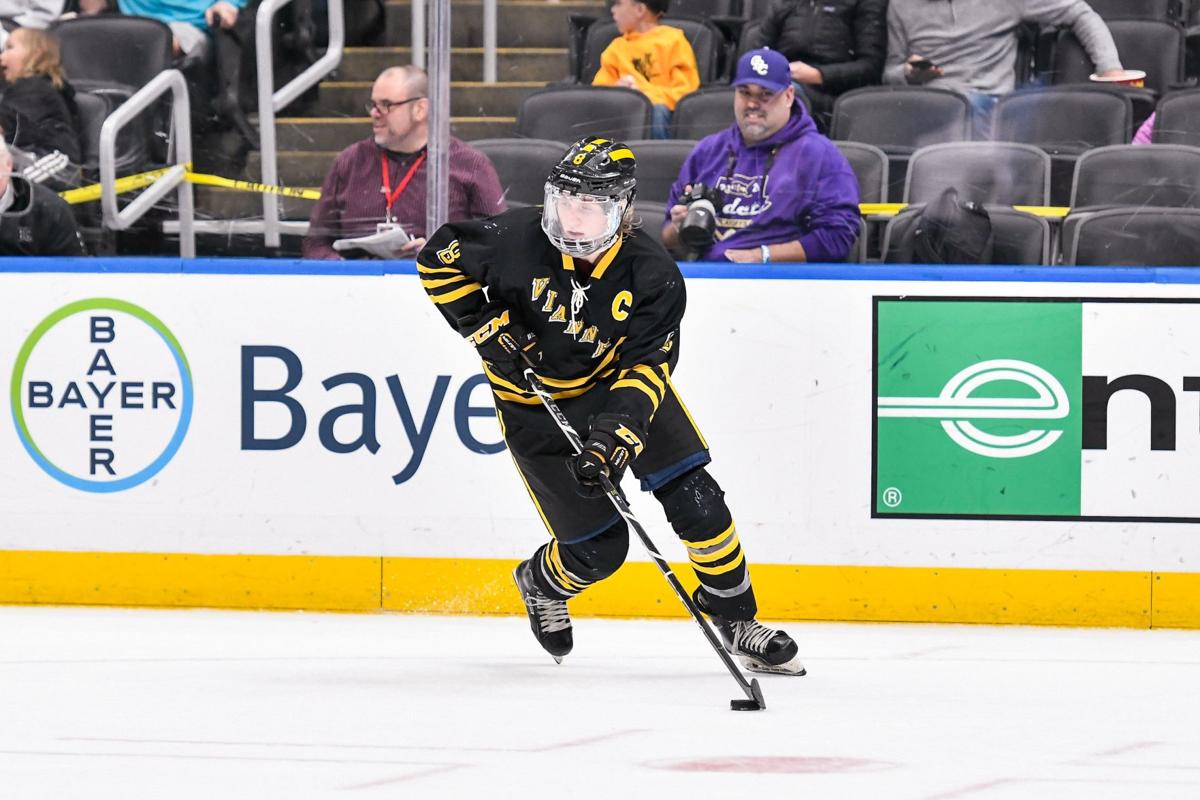 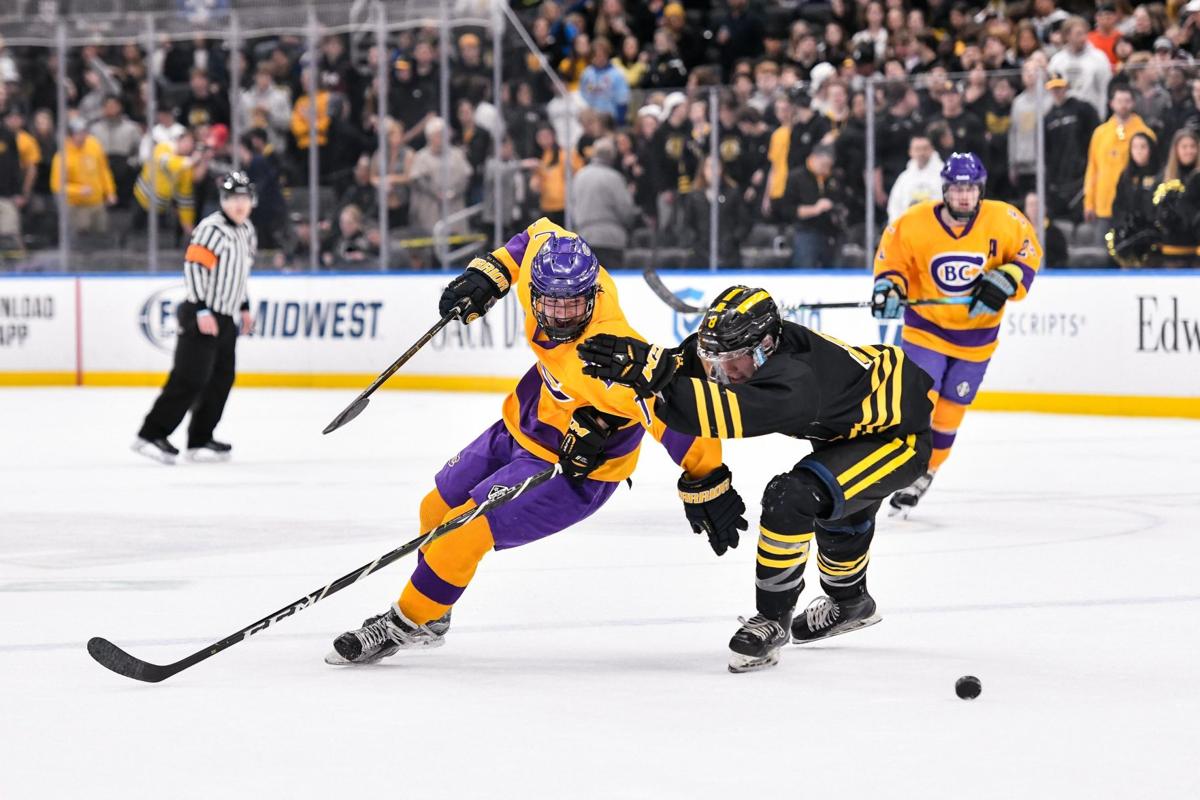 The Boccardis kept it in the family.

As the clock ran out and Vianney was crowned the Mid-States Club Hockey Association Challenge Cup champion, it wasn’t just a fairytale ending to a standout career for senior Joey Boccardi. It marked the Golden Griffins' program coming full circle.

It was Vianney’s first hockey championship since 1996. The goalie on that team was Mario Boccardi, Joey’s uncle.

“We’ve talked about this forever,” Joey Boccardi said. “He always said he was the last one to do it and you will be the next one. We are so fortunate that we did.”

Of course Mario was in the stands, as were 60-70 family members and friends.

Joey wasn’t the only Boccardi on the ice. His brother, Gianluca Boccardi, is a standout sophomore forward and Mario’s son, Vinny Boccardi, saw some time on varsity as a freshman but didn’t dress after a mid-season injury.

“Hockey’s always been our family’s main sport,” Mario said. “We’ve had Blues season tickets at the old Arena since we were kids. It’s just something we’ve always loved.”

Joey got his first skates when he was 4 years old. He played hockey and soccer, but his love for hockey eventually won out.

A natural leader, the 6-foot-2 defenseman was a rock on Vianney’s blue line. Joey also showed a penchant for timely offensive production with a team-leading 12 points in the playoffs after scoring 11 in the regular season.

Joey Boccardi is the Post-Dispatch All-Metro ice hockey player of the year.

“He brings a whole other dynamic to the ice when he’s out there,” Vianney coach Brian McGlynn said. “The kids feed off of him. He’s a natural leader.”

Vianney needed all of that leadership during a roller-coaster postseason run.

The Griffins began round-robin play in the first round with a loss to Kirkwood, leaving them in a virtual must-win situation against two-time defending champion St. Louis U. High in the second game. Thanks to a Timothy Pazdernik goal late in the third period, they pulled out a 1-0 win.

Vianney moved on to the quarterfinal round with an 8-1 win over Francis Howell. Joey scored twice and had three assists. Gianluca added a goal and an assist.

Joey’s performance was another example of him raising his level when the pressure was at its highest.

“He expressed several times to me that he was going to go out there and be the best player on the ice and he backed it up,” McGlynn said. “And it’s not about scoring. He was making good physical contact in crucial parts of the ice, he was assisting on goals, he killed penalties. All those little things add up.”

After sweeping Priory in a quarterfinal series, Vianney lost to Lafayette in Game 1 of the semifinal round, putting the Griffins in another must-win scenario.

“We all just said we’re not losing Saturday night,” Joey said. “I came to the rink with the mindset that this wasn’t going to be my last game and it wasn’t. Losing wasn’t an option.”

Joey led the way in Vianney's Game 2 win, which led to a scoreless mini-game and extra period to send it to a shootout.

Gianluca scored in the sixth round of a shootout to send Vianney to the championship game.

The Boccardi family was in the stands living and dying with every bounce of the puck.

“I was sitting there holding my brother's shoulder and he couldn’t even watch,” Mario said of Gianluca’s shootout winner.

CBC stood in Vianney’s way in the title tilt. After Vianney jumped out to a 3-0 lead, CBC scored two quick goals to cut the deficit to one midway through the second period.

Joey knew he had to take charge.

“On the bench I like to talk a lot,” Joey said. “I told the guys to remain calm and put things on the net because they put a new goalie in. He hadn’t seen a shot since warmups, so keep putting it on net.”

Then Joey backed up his words with his play by erasing a chance for CBC's Tony Andrews with a perfect open-ice body check with four minutes to play.

“I have to shut this down. I can’t let this kid come down with all the momentum,” Joey said of the play. “I thought he was going to try to make a move on me and then I saw he was going for a shot through my legs and I put my stick on his stick and body on body, and then kind of just shut him down and the crowd took over. It was nice.”

Joey was on the ice with 4.4 seconds left when CBC had one last faceoff deep in Vianney's zone. He helped thwart the Cadets' chance to tie it, giving Vianney its third title in program history.

“Those last four seconds felt a lot longer than they usually do, but those four seconds were awesome,” Joey said.

And a proud uncle was leading the cheers.

“I still remember when I went in '96 when we played. It was like the other day,” Mario said. “I remember winning. I tell my nephews all the time and my kid, of all the Triple-A things and everything I did in high school, the high school state championship is the one thing I remember more than anything.”

Joey is happy he's been able to add to Vianney’s championship history. Now he has a story to add when the topic comes up, as it often does, at Boccardi family events.

And he hopes this is just the beginning for Vianney. Gianluca and Vinny are part of a talented group of underclassmen. And Mario has a seventh-grader who plans to play for the Griffins.

“Our coach said at the beginning of the year that Rome wasn’t built in a day,” Joey said. “We stuck with that quote throughout the year, and once we won the championship we said welcome to Rome and Rome didn’t take a fall after one year. That’s the plan. Let’s keep on going with it.”

Day continued to build on his reputation as a solid goaltender by guiding the Pioneers to their second consecutive semifinal appearance. The 5-foot-9 netminder posted a 7-5-2 record with a 1.86 goals against average and a .931 save percentage. He had three solo shutouts in 14 games.

A leader on a team that relied on its defense for success, the 6-foot-2 blue liner combined consistent play in his own zone while also contributing on the offensive end. Hazelton scored three goals and had 11 assists with one game-winning goal. Three of his assists came in three playoff games for the Jr. Billikens.

A 6-foot defenseman, Thomas emerged as a force on the blue line as the Lancers adjusted to play in the hyper-competitive Municipal Division. Thomas logged big minutes in even strength and on special teams as the Lancers advanced to the Challenge Cup semifinals. He finished with five goals and nine assists.

Slowed by a concussion at the start of the season, the 5-foot-7 forward made up for lost time by being a key cog in the Cadets' explosive offense. Bulger scored 26 goals along with 16 assists with five game-winning goals in 18 games. He was clutch in the postseason with six goals and nine assists in eight games.

The area’s scoring leader, this 5-foot-7 forward powered a high-octane Granite City attack to the Mississippi Valley Club Hockey Association championship. Parker finished with 50 goals and 59 assists — 13 more points than the area's second-leading scorer. He had a goal and five assists in the Warriors’ title-clinching 6-2 win over Freeburg/Waterloo.

The 6-foot goaltender was a wall in net during the Golden Griffins championship run. Niemeier posted a 16-5-1 record with a 1.65 goals against average and a .915 save percentage.

The leader on the Cadets’ blue line, the 6-foot defenseman headed a unit that gave up just 32 goals in 29 games. He also chipped in offensively with 10 goals and six assists.

The 5-foot-8 forward was the offensive go-to player for a Rebels team that advanced to the Challenge Cup quarterfinals. Boatright finished with 21 goals and 19 assists.

The 6-foot-2 forward scored 10 goals and had 13 assists as the top offensive threat for the Pioneers. Campbell signed to play Division I hockey for Quinnipiac University.

The main scoring option for a Falcons quad that advanced to the Challenge Cup quarterfinals. A 5-foot-10 forward, Lane scored 16 goals and had 23 assists.

The Tigers’ top offensive option, the 6-foot-4 forward was instrumental during Edwardsville’s march to the Challenge Cup playoffs. Tucker finished with 24 goals and 18 assists.

The 5-foot-9 defenseman helped lead the Mustangs to the Challenge Cup quarterfinal round.

A 6-foot-4 defenseman, McClellan had 12 goals and 13 assists while leading the Patriots to the Founders Cup title.

The 6-foot forward scored 12 goals and had 10 assists for the Wickenheiser Cup runner-up.

A 6-foot-2 forward, he scored 14 goals with 10 assists, including three game-winning goals.

Bud Winter, the Post-Dispatch ice hockey player of the decade, led CBC in scoring as a sophomore, junior and senior and finished his career with 81 goals and 68 assists.