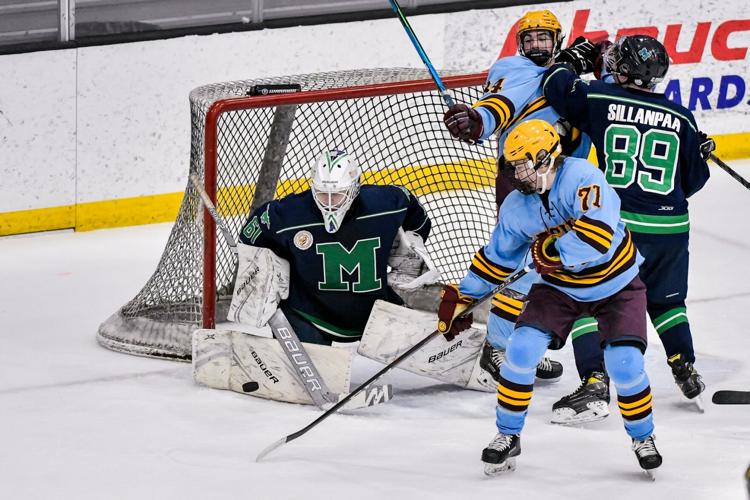 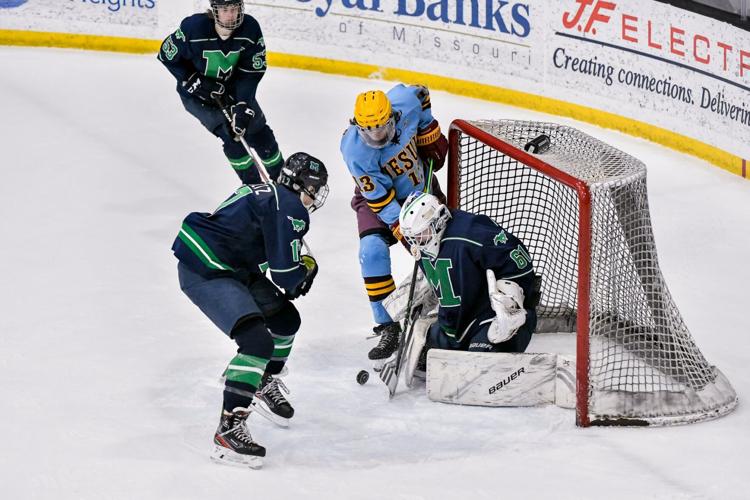 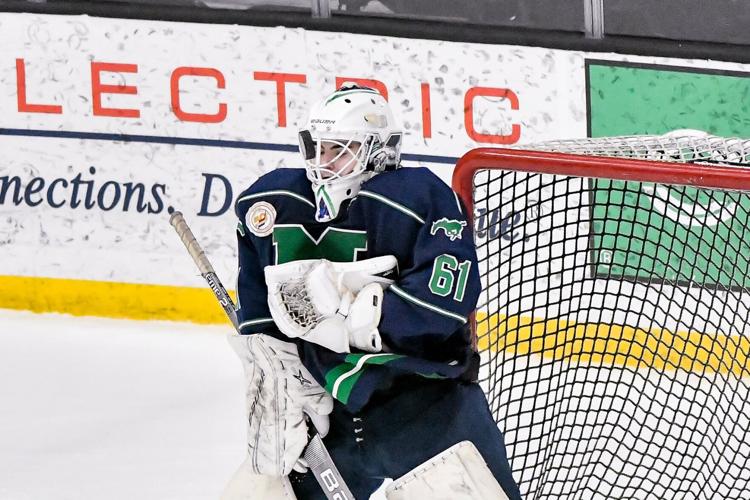 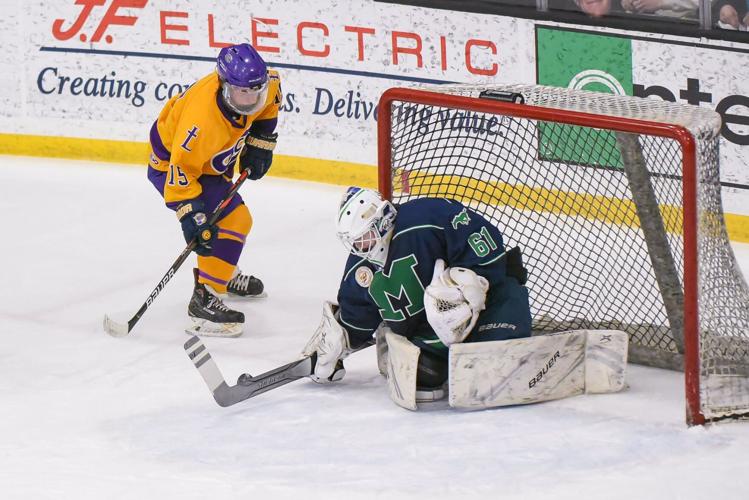 He and the Mustangs are happy his plans changed.

Weatherford, a 5-foot-11 goaltender, was set to play junior hockey in New Hampshire when coronavirus struck. He was living in a dorm, which didn’t sit well with his parents.

“It was a family decision,” Weatherford said. “We thought it would be best if I came back to St. Louis.”

The Mid-States Club Hockey Association season had started by the time Weatherford returned, so the junior had to talk to Marquette coach Gary Tockman about joining the team.

“I said I'm glad to have you back, but I just want to let you know that (Cole) Eckert’s been here and you're just going to have to wait your turn, and get whatever starts you can,” Tockman said. “He said I totally get it. I'm totally fine with that. I just want to be part of the program.”

Starts were hard to come by as Eckert proved himself to be one of the top goalies in Mid-States.

But Weatherford made the most of his opportunities to force a tough decision come playoff time.

“I said, I don't care which one of you plays, I love you both,” Tockman said. “I'm going to play whoever is hot and they both agreed.”

That is when Weatherford transformed into a forest green and navy wall in leading the Mustangs to the Challenge Cup final.

Weatherford went 5-2-1 in the postseason with five shutouts. He allowed just five goals on 212 shots and had a .976 save percentage.

Weatherford is the Post-Dispatch All-Metro ice hockey player of the year.

“During the playoffs, I just kept on doing the same thing,” Weatherford said. “I was little superstitious throughout it, so I just kind of did the same thing, same routine every single day.”

That included a regimen of sleep, shower and getting to the rink two hours before game time. It also included a stop at Red Lobster for a pregame meal of coconut shrimp.

“I don't ever talk to goalies before the game, but I'll sneak a peek now and then in warmups or when he gets a drink of water,” Tockman said. “It looked like it was just another game, like it was just practice almost. It was pretty incredible.”

Weatherford’s dominance started with a 1-0 win over top-seeded De Smet, in what was a must-win game for the Mustangs after dropping their first game of the Challenge Cup preliminary round robin.

The Spartans peppered Weatherford with 33 shots, but he stopped them all, keeping Marquette afloat until Tyler Sillanpaa scored in the third period to break the scoreless tie.

That became the winning formula for Marquette — allow a high volume of shots while keeping most of the chances to the perimeter, knowing Weatherford will stop them; then capitalize when an offensive chance presented itself.

“We have the mentality that all 20 guys would be all in every single game and throughout the season and playoffs we did that,” Weatherford said. “And that's why we had such a great playoff run and the team comes first so we just had that same mentality.”

Weatherford’s run continued in the next round, shutting out St. Louis U. High on 20 shots in Game 2 of their quarterfinal series to force a minigame. Weatherford made 11 more saves in a scoreless minigame and seven more saves in a nine-round shootout before John Bush’s goal sent Marquette into the semifinals.

Weatherford continued to frustrate De Smet in Game 1 of the semifinals, turning away all 39 shots in a 2-0 win. He followed that with 40 saves in Game 2 and 12 more saves in the minigame before Ty Stultz scored 39 seconds into a sudden death period to send Marquette to the championship game.

Though the Mustangs fell short to CBC 2-0 in the Challenge Cup final, Weatherford still made 35 saves and was the talk of the postseason.

“My goalie coach just taught me just keep it one shot at a time and keep things simple, don't do anything too complicated,” Weatherford said.

With the season over, Weatherford has two favorite moments from the Mustangs’ run.

“I was something I will never forget,” Weatherford said. “I know it wasn't at Enterprise Center, but it was still such a great experience and Mid-States did a great job of organizing that whole thing and allowing fans to come in.”

Lost, but certainly not forgotten within the Marquette program, was Eckert’s contribution. Eckert played most of the regular season and had two shutouts with a .883 save percentage.

But Eckert became Weatherford’s biggest cheerleader in the postseason, putting the team first while recognizing the special run his teammate was on.

“I can't say enough about him,” Tockman said. “He just didn't complain, he was excited, he was the first guy on the ice, jumping on Isaac when we won the game. I mean he was on the bench, pumping the kids up. He's just an awesome kid.”

The play of Weatherford and Eckert earned the respect of their teammates.

“It gives us a lot of opportunity to be more open-minded with our play, because we know that we can always count on both of them to make a save when we need them too,” Marquette senior Justin Rapp said before the championship game.

The good news for Marquette is both Weatherford and Eckert are juniors and both plan on returning for their senior season with a talented core coming back as well.

Weatherford knows Eckert will push for playing time. The friendly goalie competition should serve Marquette well next year and beyond.

“Eighth graders and seventh graders who are looking at this program are going to want to play even more for this program,” Weatherford said. “I think we've planted the seed and it's only going up from here.”

An ironman in goal, Bely missed only two games in helping lead the Rams to an 18-1-4 record and their first Wickenheiser Cup title. Bely had seven shutouts and a .929 save percentage. The 5-foot-11 Bely raised his game to another level in the postseason, going 7-0-1 with a .958 save percentage and two shutouts.

The team captain provided leadership as the Jaguars posted a 14-6-2 record and advanced to the Wickenheiser Cup semifinals. A 6-foot-3 defenseman, McNamee was tied for the area’s top spot in scoring with 54 points (33 goals, 21 assists). He had 11 points during the Jaguars’ playoff run, including two game-winning goals.

Considered one of the area’s best defensemen, Rumpf made up for missing the Challenge Cup championship game as a junior due to injury by leading the Cadets to their 17th championship. The 6-foot blue liner excelled in all three phases while helping lead CBC to an 18-2-4 record. The Cadets allowed a stingy 1.17 goals a game with Rumpf leading the defense.

A 6-foot-1 forward, he was the main scoring option for a team the rebounded from a down season in 2020 to post a 17-4-2 record, earning the Spartans the top seed in the Challenge Cup playoffs. Salthouse had 25 points (18 goals, 7 assists). He led the team in scoring during their postseason run with eight points in six games, averaging 1.33 points a game.

The key cog in a high-powered offense, Sprague helped lead the Lancers to a 12-8-4 record and a spot in the Challenge Cup semifinals. A 6-foot-2 forward, he scored 38 points (27 goals, 11 assists) with six game-winning goals and four hat tricks. Sprague had nine points during the postseason run with two game-winning goals.

A two-time first team All-Metro performer, this 6-foot-1 defenseman logged a massive amount of minutes on the Lancers’ blue line. Thomas excelled in all phases — even strength, power play and penalty kill. He finished with 11 points (2 goals, 9 assists) and had four points in the Lancers’ second successive run to the Challenge Cup semifinals.

A 5-foot-11 defenseman, Biondo led a Spartans blue line that allowed just 1.83 goals a game. Biondo had an offensive touch with 11 points (4 goals, 7 assists) and had a penchant for the dramatic, scoring with 24 seconds left to force a mini-game in the Challenge Cup semifinals.

The 5-foot-10 forward attracted attention from opposing defenses whenever he was on the ice. Meers scored 36 points (21 goals, 15 assists) with two game-winning goals and three hat tricks while leading the Pioneers to the Wickenheiser Cup semifinals.

The epitome of an offensive-minded defenseman, the 6-foot Robinson was tied for the area’s scoring title with 54 points (44 goals, 10 assists) with five game-winning goals and nine hat tricks. His shot powered the Spartans to a 15-8-1 record and trip to the Wickenheiser Cup final.

One of the top offensive options for the Wickenheiser Cup champion, Stern was tied for the team lead in scoring with 33 points (21 goals, 12 assists). The 6-foot-2 Stern led the Rams with four game-winning goals and three hat tricks.

A 5-foot-10 goalie, Tiemeyer was a rock for a Vikings team that steamrolled through a perfect regular season before falling in the Challenge Cup quarterfinals. Tiemeyer went 15-0-1 with a .969 save percentage and six shutouts.

This 5-foot-11 forward was one of the area’s scoring leaders as the Ravens posted a 14-4-3 and earned the top seed in the Wickenheiser Cup playoffs. Walker finished with 47 points (28 goals, 19 assists), including five game-winning goals and two hat tricks.

Despite missing a chunk of the season with a broken collarbone, the 5-foot-7 Bulger finished with 22 points (13 goals, 9 assists) as the Cadets rolled to an 18-2-4 record and their 17th Challenge Cup championship. Had one goal and two assists in the Challenge Cup knockout rounds, including an assist in the title game.

A 6-foot-4 defenseman, Chase played beyond his years and left everything he had on the ice while helping lead Marquette to an 11-12-1 record and a trip to the Challenge Cup final. Chase led a defensive unit that allowed just 1.10 goals against in the postseason.

An exchange student from Finland, the 5-foot-10 goaltender used his athleticism to turn away shot after shot for the Red Devils. Myller made 396 saves in 14 games and had a .912 save percentage and one shutout in leading the Red Devils to the Challenge Cup playoffs.

The 5-foot-11 forward was one of the area’s scoring leaders while helping lead the Longhorns to an 8-10-1 record. Waddell finished with 35 points (17 goals, 18 assists) with three game-winning goals and three hat tricks.

A 6-foot forward, he helped lead the Jr. Billikens to the Challenge Cup playoffs. Warnecke finished with 19 points (11 goals, 8 assists) and led the team with three game-winning goals and was tops on SLUH with six points in the postseason.

The 6-foot-1 defenseman covered a ton of ice for a Pioneers team that finished with a 6-9-6 record after going winless in their first nine games. Vitt headed a defense that allowed just 2.14 goals against during the entire season. 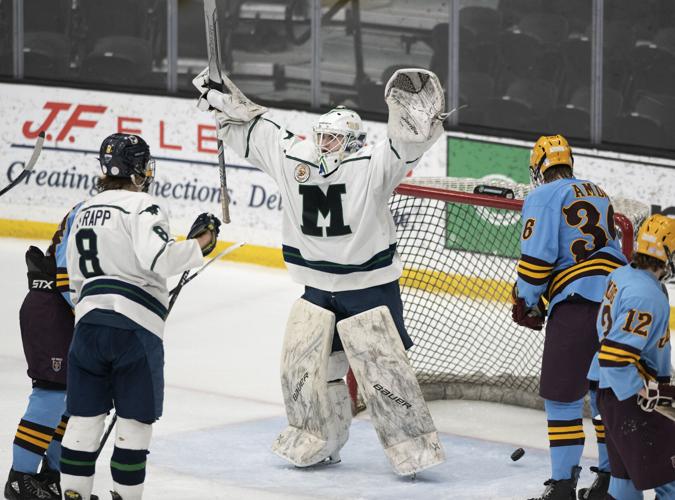 Marquette's Isaac Weatherford (61) celebrates after a shutout in a hockey game in the Challenge Cup semifinals on Saturday, February 20, 2021 at the Centene Community Ice Center in Maryland Heights, Mo. Paul Halfacre, STLhighschoolsports.com 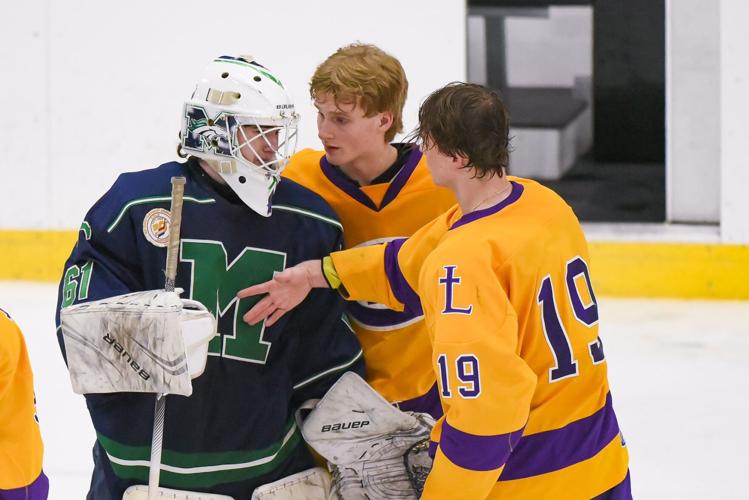