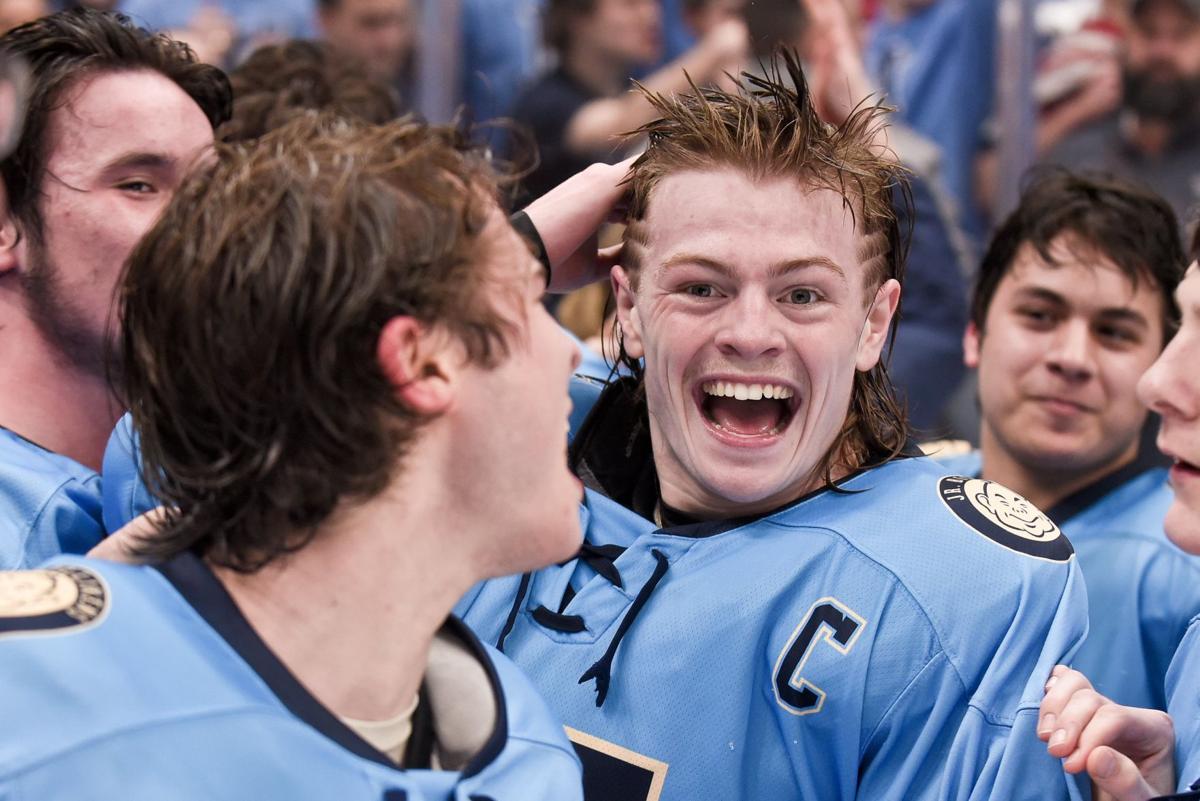 SLUH senior Henry Wagner (10) is all smiles while celebrating the win in the championship game of the Challenge Cup played Wednesday, March 13, 2019 at Enterprise Center. Rick Ulreich, Special to STLhighschoolsports.com 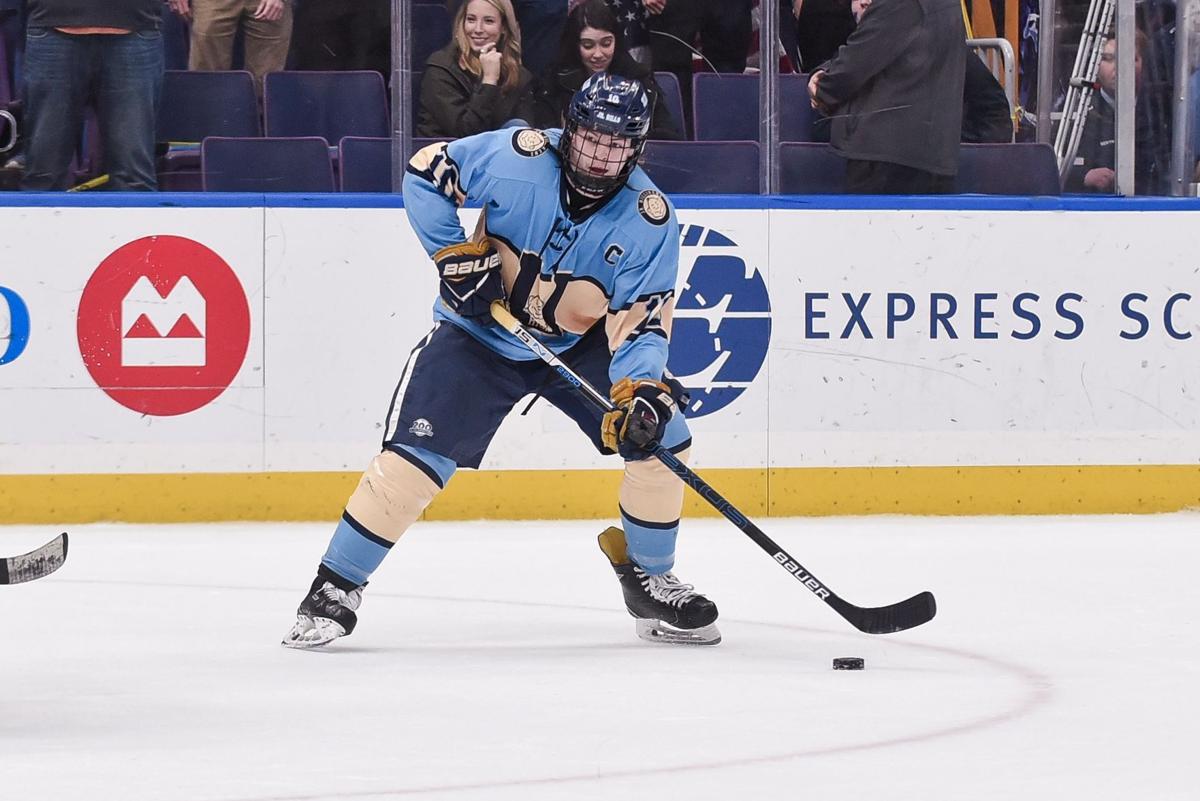 SLUH senior Henry Wagner (10) looks for a lane to take a shot in the championship game of the Challenge Cup played Wednesday, March 13, 2019 at Enterprise Center. Rick Ulreich, Special to STLhighschoolsports.com 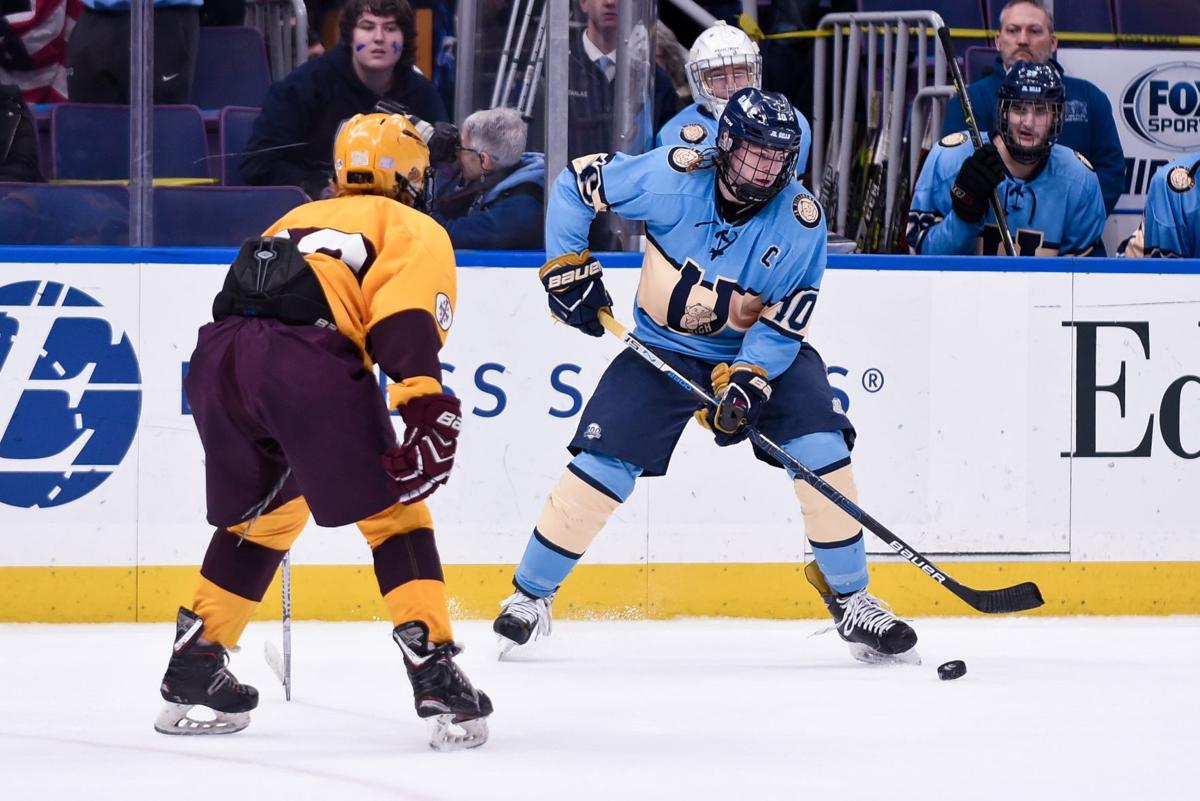 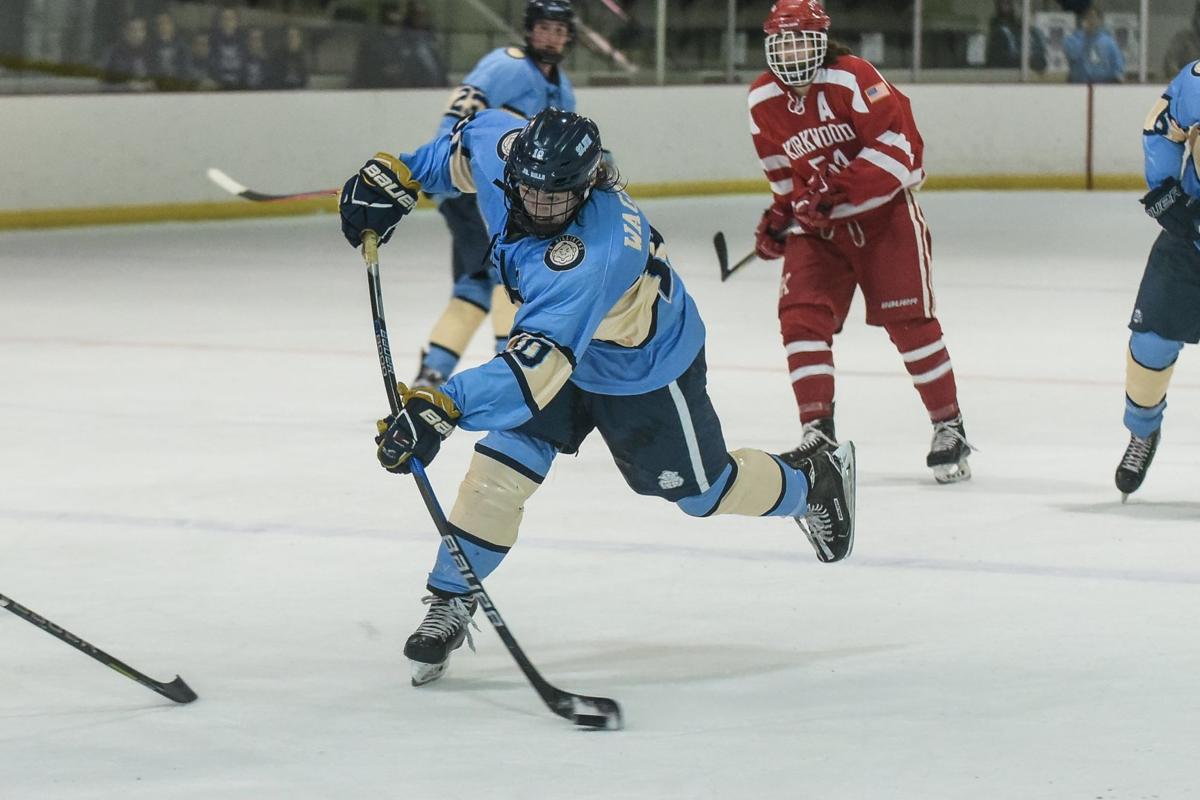 Billy Wagner, a freshman on the St. Louis U. High ice hockey team, came down with the flu. His parents, Joe and Molly, had to scramble to keep the bug from spreading to older brother Henry, who was also SLUH’s top offensive player, and his five other siblings.

“He was quarantined in the TV room,” Henry said.

Unfortunately for Billy, he was still contagious and had to watch the championship game against De Smet from home. But big brother and his teammates had his back, pulling out a 3-2 victory in double overtime.

Henry was able to give his younger brother his championship medal the next day.

“It was a blast playing with him,” Henry said.

It wasn’t the first time Henry Wagner, or the Wagner family, took extraordinary measures in the name of SLUH hockey.

Last year, Joe Wagner drove 24 hours through a blizzard to get Henry to the Jr. Billikens’ semifinal game. This year, Henry Wagner had to undergo extensive rehab to return to the ice after an ACL injury.

That dedication, plus Wagner’s production (35 points, including 21 goals in 21 games), earned him the nod as the Post-Dispatch All-Metro ice hockey player of the year.

“Henry is an extremely explosive player,” SLUH coach Jack Behan said. “Great skater, strong on the puck, aggressive, a really good skill set all the way around. You go to the rink and watch the game, he’s the one who stands out.”

Henry Wagner’s legend started to grow last March. As a junior, he took a tour of Harvard University only to have a nor’easter shut down the Boston airport. His father rented a car on that Friday, drove 24 hours through treacherous conditions that featured three flat tires, a spinout into a snow ditch on Ohio, and a speeding ticket, in order to get Henry to St. Peters Rec-Plex in time for SLUH’s semifinal game against Chaminade.

They arrived less than two hours before puck drop. Henry Wagner rewarded his father’s commitment by scoring four goals in the game.

“That was classic Henry,” Behan said.

But Wagner's senior season was in doubt after fell awkwardly on his knee during a club game in September.

“It felt really weird,” Henry Wagner said. “I started panicking a bit talking to the trainer. I knew it was my knee. The first prognosis it didn’t seem bad, but then I heard ACL and I started freaking out, but it was only a partial tear.”

He didn’t need surgery, just three months of intensive therapy that included 45 minutes of stretching on his own every day.

Henry Wagner returned  to the SLUH lineup just before Christmas.

“His presence back in our lineup changed the dynamics of our team and changed the personality of the team drastically and all in a positive way,” Behan said.

Wagner’s father and uncles went to SLUH, as did several people in his University City neighborhood. He always knew he wanted to attend the school, especially after watching the Jr. Billikens win their first state title in 2013.

“In some of the high school rinks you can just hear the fans chanting and the music blaring,” Henry Wagner said. “It’s a special experience.”

Wagner will spend a year in junior hockey before enrolling at Yale University in the fall of 2020. He plans to major either in architecture or biology, possibly pre-med.

For the next year, hockey will be Wagner’s priority. He hasn’t chosen which junior team he will play for, but he knows it will be a challenge.

“I’m definitely a smaller player than most of the guys out there so just improving strength and just adapting to the quicker pace of play,” said Henry Wagner, who stands 5-foot-9. “Everything can always get better, getting stronger, improving my shot. I want to try to become more of an offensive weapon, stronger, harder to knock off the puck.”

Behan believes Wagner will shine at the next level.

“He’s going to adapt well,” Behan said. “He’s got that desire. He’s got that intelligence. Obviously it will be faster, there will be bigger, stronger, faster players, but he’ll make that adjustment quickly.

A premier playmaker, he helped jump-start a prolific offense that averaged 3.81 goals a game in the Mid-States Club Hockey Association. Bulger led the Cadets with 30 points (10 goals, 20 assists). That output is 19 points more than his freshman season as he stepped up to a more prominent role.

The points leader for the Mid-States Club Hockey Association, he led the Pioneers to their third trip to the Wickenheiser Cup championship game. Conti finished with 74 points (52 goals, 22 assists). A relentless competitor, he also posted a whopping nine hat tricks.

Considered one of the top blue liners in the Mid-States Club Hockey Association, he was a key part of the Jr. Billikens’ run to a second successive Challenge Cup championship. Lockwood provided an even-keeled presence for a defense that allowed seven goals in eight playoff games. He also scored 16 points (7 goals, 9 assists).

The offensive catalyst for a Lancers team that won the Wickenheiser Cup in the Mid-States Club Hockey Association playoffs. Vermeersch had a team-high 35 points (17 goals, 18 assists). He also had three game-winning goals and one hat trick.

Day, along with teammate Tyler Glick, formed arguably the best netminder tandem in the Mid-States Club Hockey Association. Day finished with a 6-5-2 record with a .941 save percentage and three shutouts. He made 41 saves against Vianney to lead the Pioneers to their first Challenge Cup semifinal since 1992.

The captain of a Red Devils team that advanced to its second successive Challenge Cup semifinal, he posted 19 points (2 goals, 17 assists).

Led the Pioneers with 28 points (16 goals, 12 assists), along with two game-winning goals and one hat trick.

A player who prides himself in doing the dirty work that made the Lancers’ top scoring line successful, he finished with 27 points (14 goals, 13 assists) and was named the Wickenheiser Cup championship game MVP.

Had a knack for timely goals. Finished with 19 points (11 goals, 8 assists), including a pair of tallies to lift the Spartans to the Challenge Cup championship game.

A clutch performer who came up with several big saves in the Jr. Billikens’ win in double-overtime in the Challenge Cup championship and finished with a 12-2 record.

A rock on the blue line for the Golden Griffins, he scored 11 points (3 goals, 8 assists).

Also a third team All-Metro performer as a sophomore, he led the Mustangs with 38 points (24 goals, 14 assists).

A leader for a Falcons team that advanced to the Wickenheiser Cup semifinals, he finished with 14 points (4 goals, 10 assists).

His 6-foot-3 frame and perfect positioning presented a challenge for Spartans opponents as he posted a 7-3 record with two shutouts.

SLUH senior Henry Wagner (10) is all smiles while celebrating the win in the championship game of the Challenge Cup played Wednesday, March 13, 2019 at Enterprise Center. Rick Ulreich, Special to STLhighschoolsports.com

SLUH senior Henry Wagner (10) looks for a lane to take a shot in the championship game of the Challenge Cup played Wednesday, March 13, 2019 at Enterprise Center. Rick Ulreich, Special to STLhighschoolsports.com