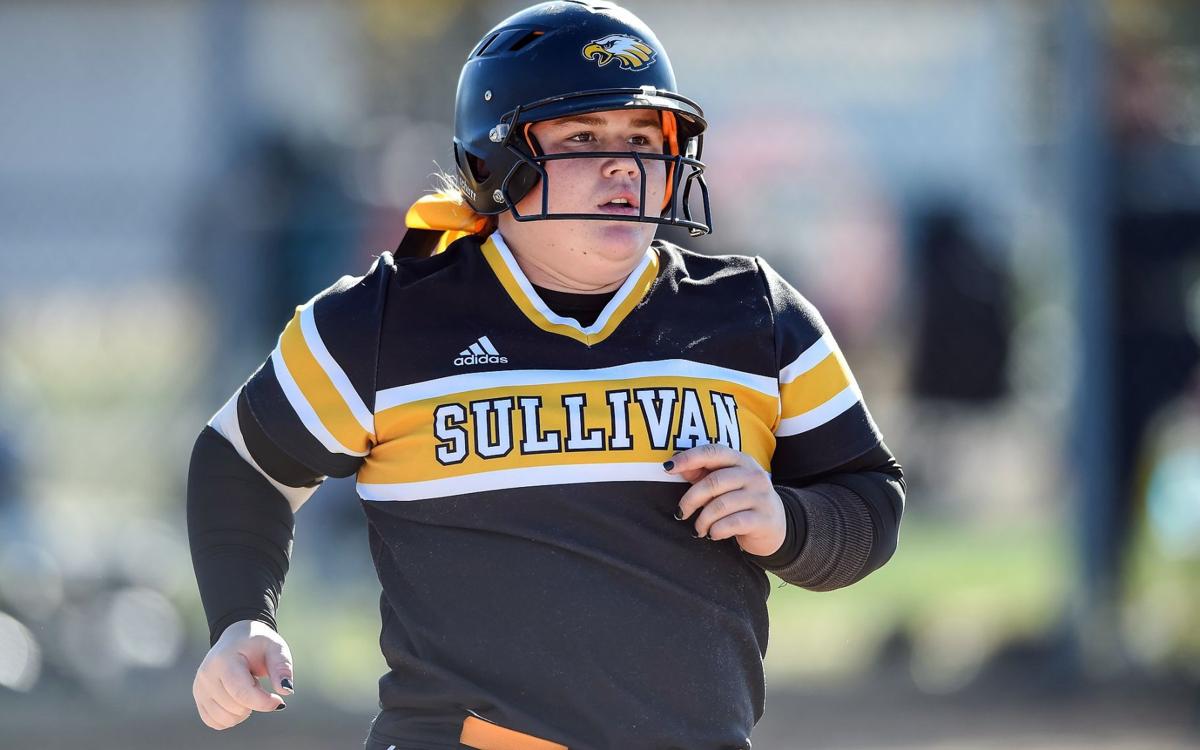 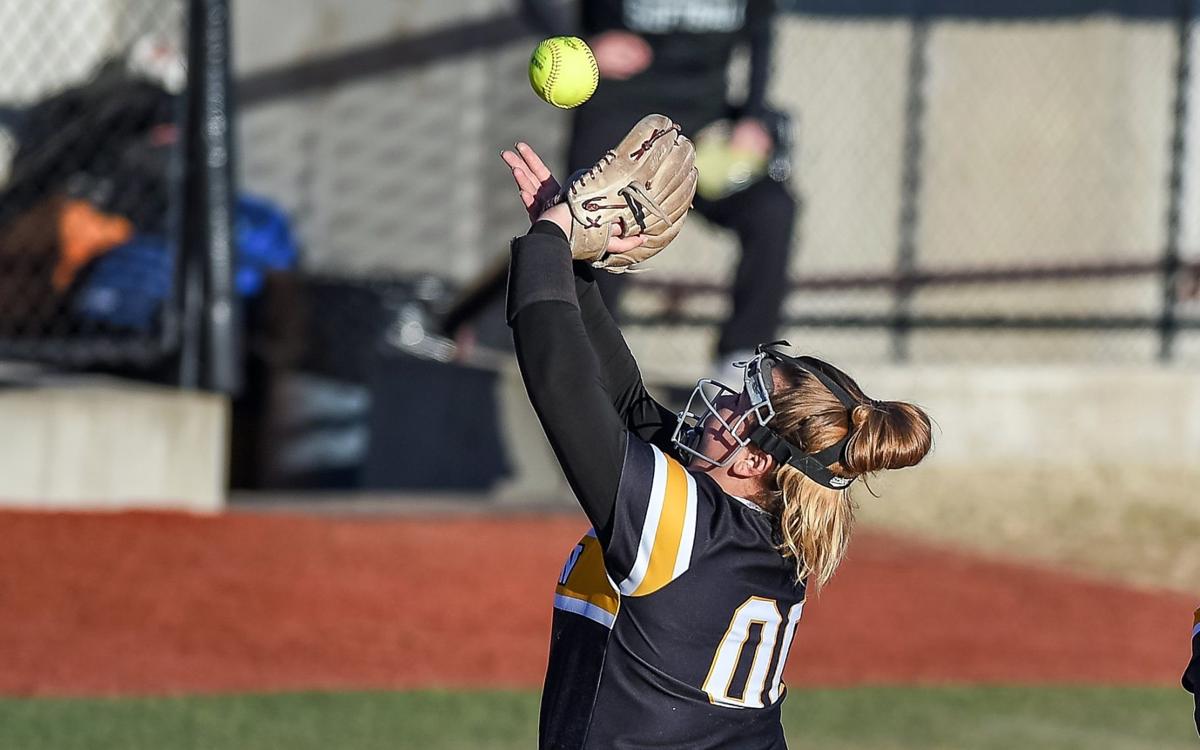 Sullivan's Addison Purvis grabs a popup on the third base line during the Class 3 state championship softball game against Helias on Saturday, Nov. 2, 2019, at Killian Softball Complex in Springfield, Mo. Randy Kemp | Special to STLhighschoolsports.com 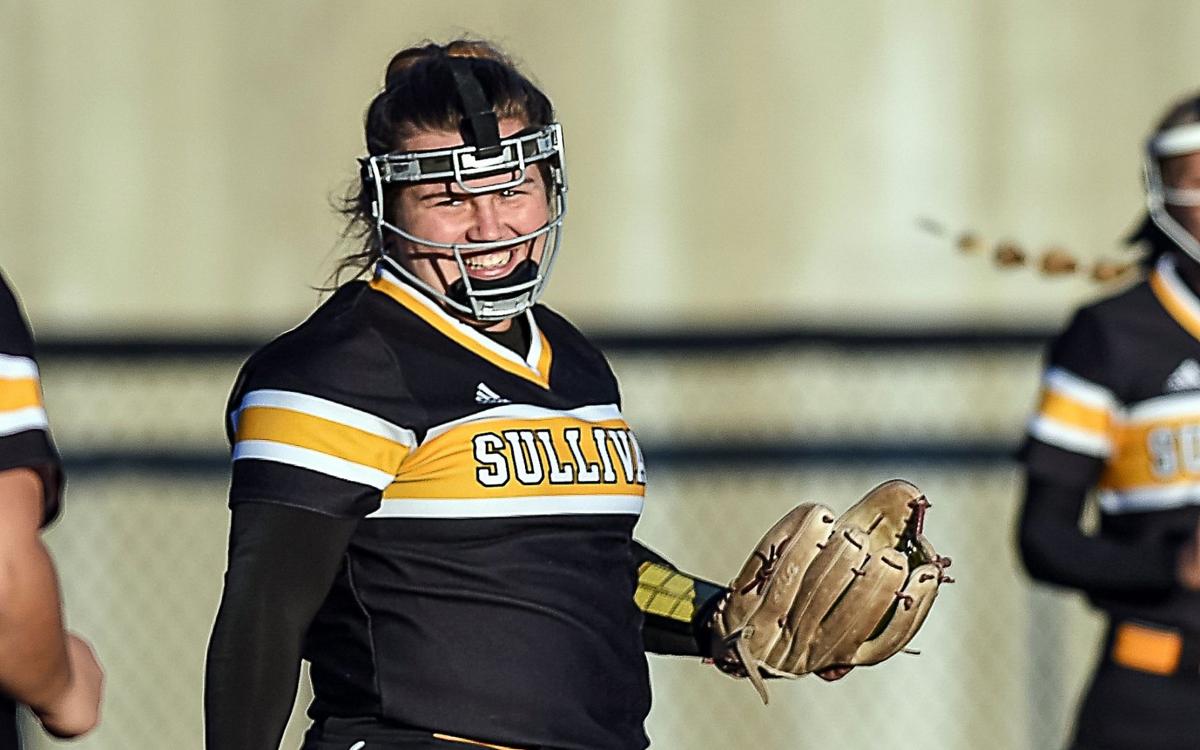 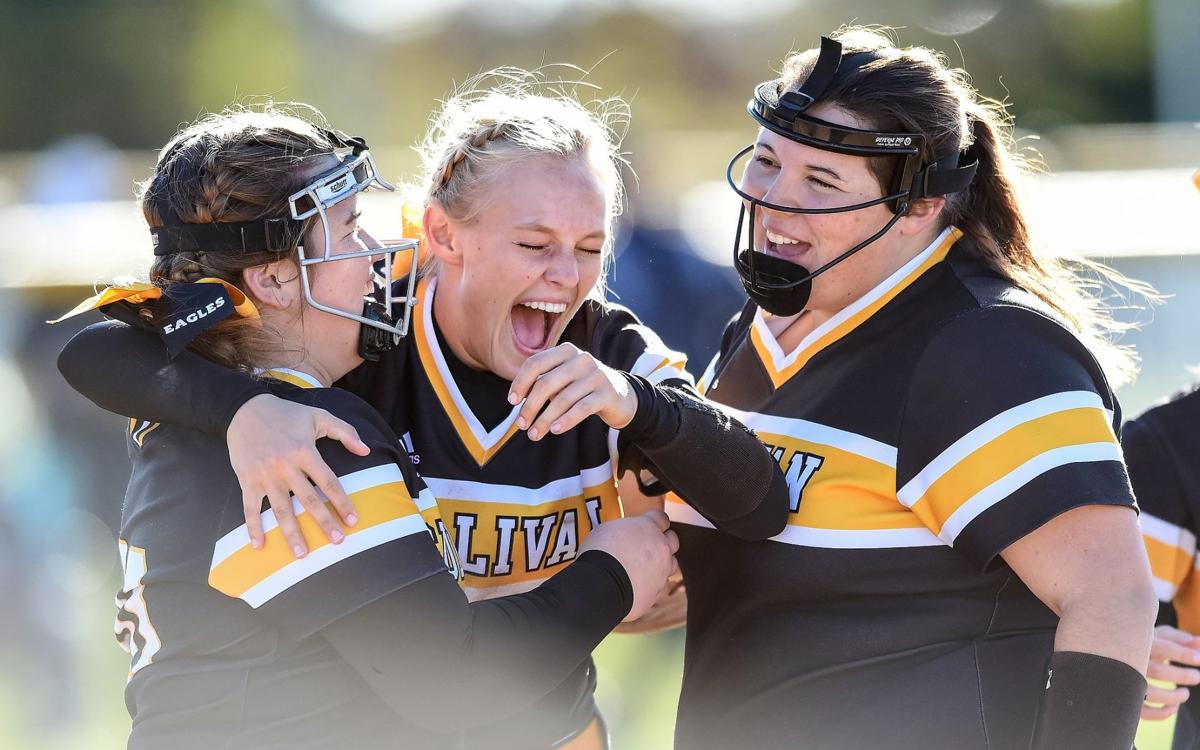 For the final month of her senior season, Addison Purvis played through pain.

Pain few knew about and an injury the standout Sullivan pitcher wasn't even fully aware of until after she threw her final pitch.

After tweaking her left knee — or landing leg when she's pitching — Purvis took some time off. She missed six games from Oct. 3 to Oct. 17. Purvis did not return to the batter's box for the Eagles until Oct. 14 and didn't pitch during that span until returning for Sullivan's postseason run.

Little did anyone know, Purvis helped pitch Sullivan to a second-place finish in Class 3 on a torn ACL.

“It just gave out on me and I went down while I was pitching,” Purvis said of the Oct. 3 incident. “I knew I had to (keep pitching in the postseason) because I needed to be out there for my team. I knew I was hurt but I also knew I could get through it at the same time. It’s been a week since surgery and it’s going good. I’m doing therapy and it’s getting better. I can bend it.”

Through all the pain, Purvis, the Post-Dispatch All-Metro softball player of the year, never wavered before or after the injury.

“Addi is one of the strongest people you will ever meet,” Sullivan junior Hanna Johanning said. “You could never tell that she wasn't feeling 100 percent because she was always strong for the team. She has worked extremely hard and had to face extreme obstacles to continue playing and I am so proud of everything she has accomplished and will accomplish. She has earned her place as our leader.”

Purvis, who has signed with Mississippi State to continue her softball career, was on another level all fall — injured or not.

A left-handed hitter, Purvis boasted a .701 average, the second best number in the area. She added a 1.373 slugging percentage, nine doubles, 12 home runs and 46 RBI.

“She’s one of those kids that’s a once-in-a-lifetime player that you get to coach because of her attitude, her values and her skill level," Sullivan coach Ashley Crump said. "She’s a kid you’ll miss, not just because of her skill, but who she is. She babysits my kids and I feel like she’s a part of my family. She was just so much fun to be on the field with. I just couldn’t wait to watch her bat because I would be in awe of some of those at-bats. I knew every time, she would hit the ball hard.”

Even Crump was unaware what the full extent of Purvis' injury was. The Sullivan coach knew Purvis was hurt, just not how bad.

“They got several different opinions and they were thinking kneecap," Crump said. "It was coming in and out and she did some therapy but it continued to bother her. We sat her until the postseason but she threw (from) the district final all the way to state. The mental toughness it took to do that and the physical ability to navigate that is unbelievable.”

Purvis, who had surgery to repair her knee the day before Thanksgiving, carried the load in the pitcher’s circle for the Eagles, who finished with a 25-7 record.

“I knew on the mound she would get the job done because she would give me everything she had, whether she’s healthy or hurt,” Crump said. “She is one of those kids you are just going to miss watching. Not just coaching, but watching.

“She started her career as a 14-year-old in the state championship game and she got to end it there. I’ll take second place any day with her in the circle. She’s tough. She got through it. If we would have known (about the final diagnosis), she wouldn’t have played and that would have been devastating. I think she deserved and earned the ability to finish.”

As she heads to Mississippi State, Purvis is confident she can pitch well in the Southeastern Conference and is feeling prepared for it.

After all, if she can help get a team to state on one leg, anything is possible.

“It was nerve-wracking knowing there was something wrong with my knee,” Purvis said. “I knew it wasn’t going away, so I just had to work through it. It’s pretty amazing that I got to go (to state) as many times as I did. I loved every minute of it. We wanted to win for the seniors in our last year and losing was devastating, but everybody did great. We earned this.”

In helping the Eagles finish second in Class 3, Cox hit .485 with a .942 slugging percentage, five doubles, an area-high 14 home runs and 54 RBI. Her 97 total bases led the Eagles.

In helping lead Northwest to 26 wins and fourth place in Class 4. Lee had a strong year at the plate. She not only hit .471 but also added seven doubles, five triples and home runs and 43 RBI. The catcher also led the team with 11 stolen bases this season.

Dennis was among team leaders for an offensive unit that got the job done this season. In addition to hitting .500 at the plate, she added she slugged .643 and also added 12 doubles and 22 RBI. Dennis also pitched in a team-high 33 runs scored and 13 stolen bases.

A key part of the veritable murders row that was the Eagles' offense, Johanning put up some serious numbers on the team's run to second in Class 3. She hit .412 with a team-high 21 doubles, six home runs and 41 RBI. She was also among team leaders with 10 stolen bases.

Fong hit .404 with seven doubles, two home runs and 27 RBI as Howell Central advanced to the Class 4 state quarterfinals. She also led the team with 20 stolen bases and was among leaders with 27 runs scored. Fong also owned a .955 fielding percentage.

Of Villarreal's 28 hits, 17 went for extra bases as she owned a .757 slugging percentage in just 74 official at-bats. She smacked 11 doubles, a triple and five home runs for the Falcons. She also pitched in 32 RBI for the team.

Throughout the season, Zareh proved to be an offensive catalyst for the Statesmen. Not only did she lead the team in hitting with a .510 average, she also added a .800 slugging percentage, nine doubles, seven triples, two home runs and 26 RBI.

Chadwick led the state quarterfinalists in hitting this season with an average of .525 and with a .677 slugging percentage. Additionally, she added 13 doubles, a triple and 16 RBI. She led the team with 31 runs scored and her 19 steals were also amongst the best on the team.

In addition to making a dazzling array of plays with consistency in the outfield, Forbeck shined at the plate for the Class 3 quarterfinalist Crusaders. She held a team-high batting average of .442 which included 12 doubles, one home run and 20 RBI.

At the plate this season, Gicante hit .371 with two doubles, five home runs and 26 RBI. Her 50 total bases were also third-most on the team. In the circle, Gicante played a significant role by earning a 9-4 record with 49 strikeouts in 74 and 2/3 innings.

Schmidt led the Knights both in the circle and at the plate this season. She amassed a 16-6 record with a 2.11 earned run average and 189 strikeouts in 142 and 2/3 innings. She also was quite proficient at the plate, hitting .558 with 14 doubles, three triples, five home runs and 36 RBI.

Buske carried the load of the work in the circle for Class 4 state quarterfinalist Webster. Not only did she own an 18-5 record, but she also possessed a 2.14 earned run average and 136 strikeouts in 134 innings pitched for the Statesmen.

A newcomer to the position, Ulrich performed admirably in helping the Eagles to second place in Class 3. She owned a .984 fielding percentage while calling pitches for a Division I signee and, all the while, she hit .398 with 14 doubles, a triple, two home runs and 24 RBI.

Cattoor possessed a rare combination of power and speed for the Blue Jays. In addition to hitting .646 with a 1.154 slugging percentage, 10 doubles, four triples, five home runs and 36 RBI, she also managed to steal 32 bases for the team.

Chipps, once again, used an overabundance of speed to help the Blue Jays. While she did lead the team in hitting at .690, her .720 on-base percentage was a big number because she scored a team-high 49 runs and added a team-best 47 stolen bases.

Robinson was an offensive catalyst for a Holt team that won 27 games and made the Class 4 sectionals. She hit .500 with a double, a triple, six home runs and six RBI. Most importantly, though, she stole 37 bases and scored 47 runs.

As the Wildcats improved the team's record by 14 wins over the previous year, Moore was in the thick of things. She walloped the ball to the tune of a .543 batting and 1.062 slugging percentage. She also added 12 doubles, six triples and home runs and 46 RBI.

Boyd showed plenty of pop when the Red Knights, who finished third in Class 3, needed it most. She hit .556 with a .815 slugging percentage and she also added nine doubles, four home runs and 30 RBI. Two of the home runs came in a state quarterfinal win.

Grisham showed plenty of pop this season for the Wildcats. In addition to hitting .395, she also put up a series of impressive numbers in other offensive categories. She added a .860 slugging percentage, 15 doubles, two triples, seven home runs and 36 RBI.

A major factor in the resurgence of a Pirates squad, which won a district title for the first time in nearly two decades, Bailey was a dynamic at the plate as she was in the field. She led the team with a .482 batting average and added 10 doubles, three triples, three home runs and 27 RBI.

The durability shown by Kraus proved to be a key factor for the Hawks. Not only did she own a 12-7 record with 83 strikeouts in 94 innings pitched, she did so while being the team's primary offensive weapon as she hit .598 with 16 doubles, two triples, four home runs and 43 RBI.

Feiste did a little bit of everything for the 22-win Jaguars. At the plate, she hit .338 with five doubles, eight home runs and 23 RBI. She also contributed in the field and, importantly, in the circle. In seven games, she was 5-0 with a 2.06 earned run average over 34 innings.

All-Metro softball pitcher of the year: Roseberry overcomes obstacles to shine for Holt

Sullivan's Addison Purvis grabs a popup on the third base line during the Class 3 state championship softball game against Helias on Saturday, Nov. 2, 2019, at Killian Softball Complex in Springfield, Mo. Randy Kemp | Special to STLhighschoolsports.com