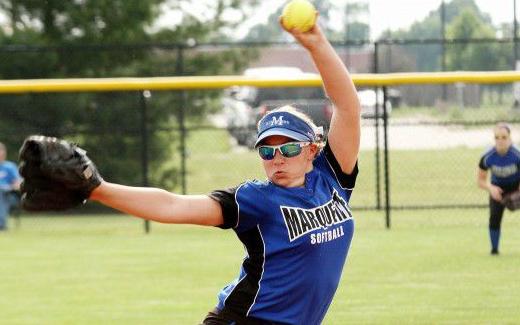 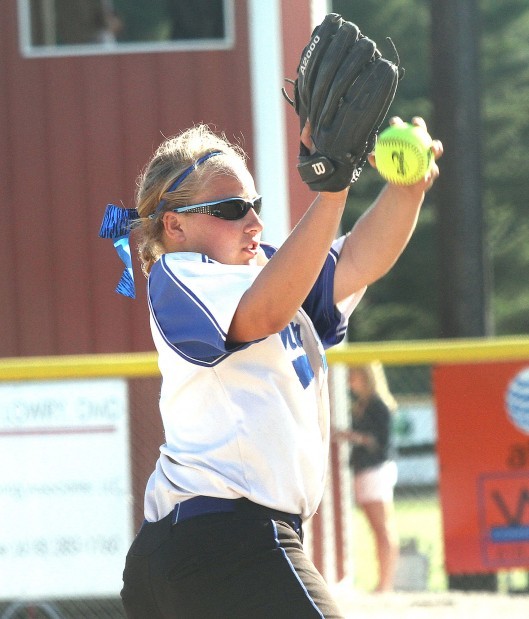 Alton Marquette's Silkwood tossed a two-hitter as the Explorers defeated Gillespie 9-1 in the semifinals of the Illinois Class 2A Vandalia Sectional. (Paul Kopsky | STLhighschoolsports.com)

Whenever pitcher Alexis Silkwood stepped into the circle this spring, there was a very good possibility she would pitch a shutout, hurl a no-hitter or end up with a perfect game.

“I couldn't have all those records without my team,” said Silkwood, who has committed to Kansas. “I know that I'm the pitcher, but I can't make every play by myself. I can't go back there and catch the ball. My teammates are a big factor in that. They had to make plays, and they had to help me, because it's a team sport.”

According to the Illinois High School Association records website, Silkwood was tops in shutouts (28) and no-hitters (19), missed by one strikeout (500) of tying her record of last season (501), was tied for third with perfect games (6) and finished in a three-way tie for third with wins in a season (34).

“She just brings so much (to the team),” Alton Marquette coach Dan Wiedman said. “She's obviously a fantastic pitcher. She has the leadership and work ethic. She just brings a lot of things to the team.

“Once she gets into the game, she's pretty singularly focused. It's one pitch at a time and one batter at a time. She just really works on each individual batter.”

To watch and hear Silkwood is a thing of beauty. At 5-foot-5, she unleashes the lower half of her body with a loud grunt as balls sail in the mid-60s.

Pitching in every game is not unusual for Silkwood, whose team lost to eventual state champion Nashville 2-1 in the Nashville Supersectional on May 28. She started in 37 of the team's 38 games this season and threw in every contest but one, piling up 231 1/3 innings. In the only game she didn't start, freshman Megan Wittich pitched and won a 12-5 decision over Pittsfield on May 5 at Quincy Notre Dame.

But Silkwood did relieve Wittich with a 2-2 count in that game, threw one pitch and earned a strikeout. For the season, Silkwood allowed only 44 hits, 37 walks and eight earned runs (13 overall) with 500 strikeouts. She hit eight batters and averaged 13.5 strikeouts a game. Batters hit .121 against Silkwood, whose team finished 35-3.

Silkwood deflects all accolades the other way, crediting her mom and pitching coach, Staci, for what she has done.

“Without my mom, who's been my coach since I was 6, I wouldn't be the player I am today,” Silkwood admitted. “She pushes me. She's my biggest fan, and she's my biggest critic. She's the one that's always there for me. I would not be the person I am without her today.”

Staci Silkwood, who was a standout pitcher at Piasa Southwestern High in the mid-1980s, said her daughter is a “very humble athlete. We separate coach and mom when it comes to training and pitching. Alexis has a sense of division. She knows that she's accountable for her actions.”

Those actions include everything on the field. While in the circle, Silkwood is constantly talking to everybody, and her teammates listen.

“She's willing to accept her performance, evaluate it and move on,” Staci Silkwood said. “I think by her handling that balance and being able to separate it. When the coach gets on her, it's for a reason. It's not good enough. It's all about not settling. She's right, she can always get better.”

In addition to being the best pitcher in the area, Alexis Silkwood was one of the top hitters. She was the leadoff hitter, batting a team-best .482 with three home runs (tied with Mia Stack) and 43 RBI (second to Stack's 47). She was tops in on-base percentage (.601) and slugging percentage (.868). Twenty-seven of her 55 hits were extra bases — 13 doubles, 11 triples and three homers.

She struck out only five times and had 28 walks in 149 plate appearances and finished with 99 total bases.

Even with Silkwood's gaudy numbers, Wiedman was still in awe.

“She has the entire game,” Wiedman said. “Physically, mentally, skill-wise, leadership-wise. Players like her don't come along very often. She's been a special player for us.”

Schedule for All-Metro publication at STLhighschoolsports.com:

Alton Marquette's Silkwood tossed a two-hitter as the Explorers defeated Gillespie 9-1 in the semifinals of the Illinois Class 2A Vandalia Sectional. (Paul Kopsky | STLhighschoolsports.com)