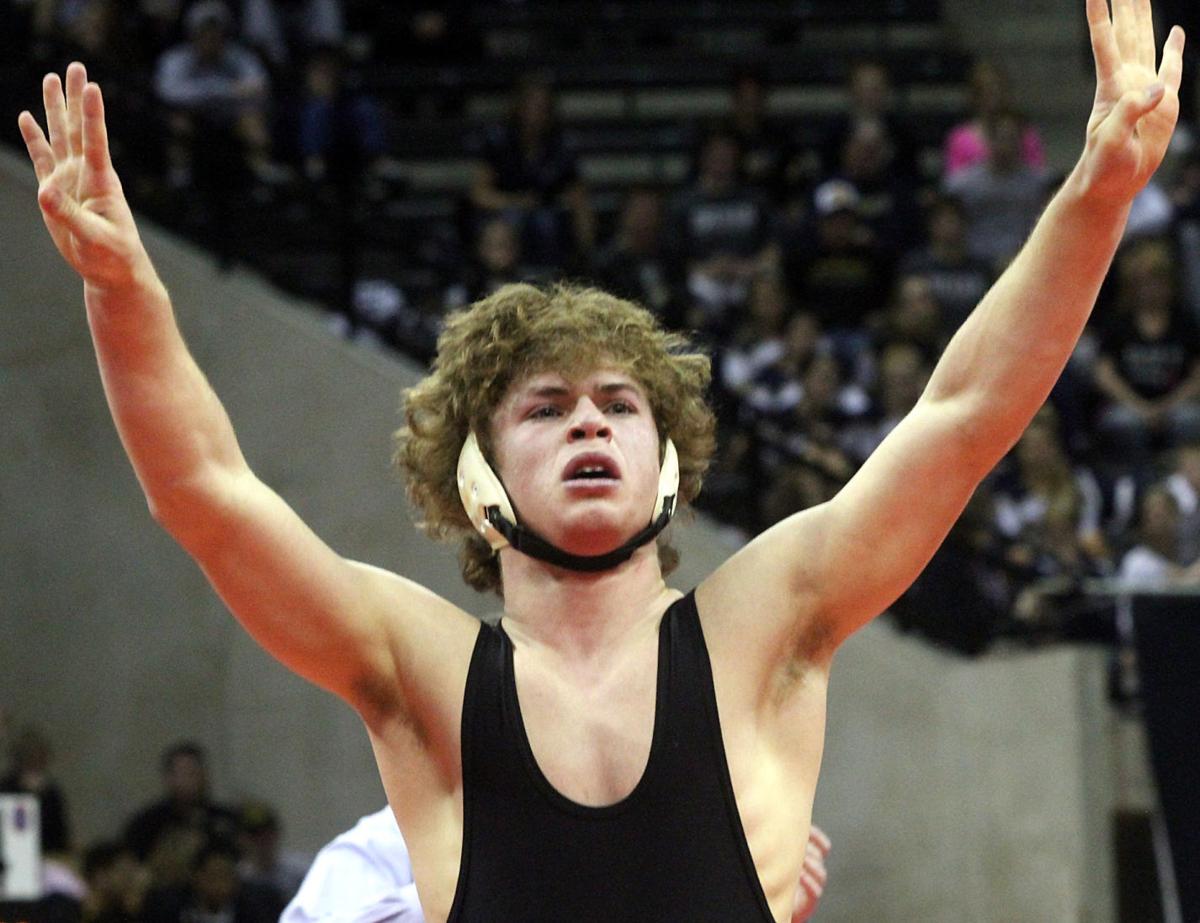 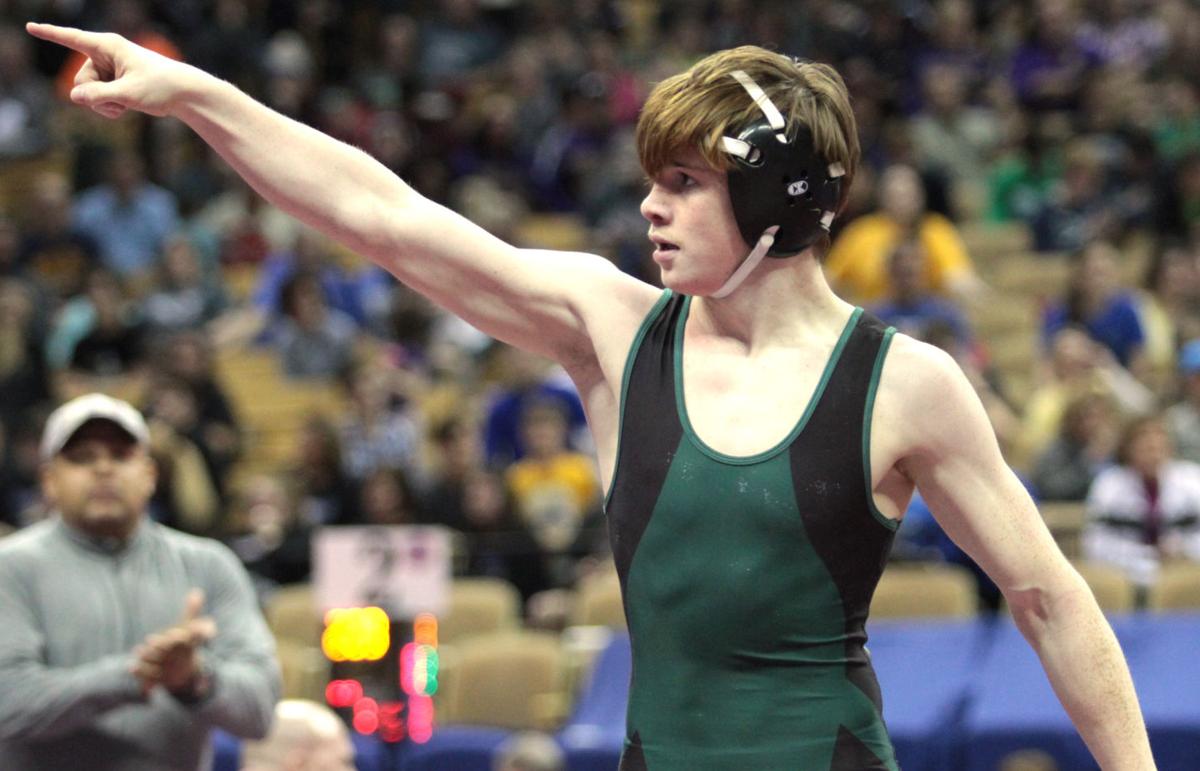 Mike McAteer of Whitfield points to the crowd after winning his Class 1 semifinal match at 120 pounds at the Missouri Wrestling Championships on Friday, February 17, 2017 at Mizzou Arena in Columbia, Mo. Paul Kopsky, STLhighschoolsports.com

The state of Missouri first started holding wrestling championships in 1931. There was one classification, and the tournament was held at Rothwell Gym on the University of Missouri campus in Columbia.

The tournament went to two classes in 1971, with the small/medium competition held at Excelsior Springs High near Kansas City and the large-school meet at Forest Park Community College in St. Louis. In 1984, with the competition at the Hearnes Center in Columbia, the field was divided into three classes — 1A-2A, 3A and 4A.

In 2005, Missouri went to a four-class wrestling tournament. And in 2019, the girls’ competition was added.

According to the Illinois High School Association website, the individual state tournament in Illinois began in 1936 and the dual team competition in Class A and Class AA was added in the 1983-84 school year. In 2009, Illinois went to its current Class 1A, Class 2A and Class 3A format.

In Illinois, there have been 14 four-time champions, with none coming from the St. Louis region. Civic Memorial’s Kip Kristoff became the first freshman to win a Class AA title in 1982 and went on to capture state titles again to finish his sophomore and senior seasons. Kristoff, who placed third as a junior, went 161-3 with 114 pins in his high school career and went on to wrestle for his father, Larry, at SIU Edwardsville.

For the Cougars, Kristoff was a four-time Division II All-American, winning the title at 142 in 1987. He was a national runner-up in 1988 and 1990 and placed seventh nationally as a freshman in 1986, when SIUE won the national championship.

Jaydin Clayton, who now goes by Jaydin Eierman, from Father Tolton Regional Catholic High in Columbia, is the only other Show-Me state wrestler to join Schatzman by going unbeaten in high school. He won 158 consecutive matches from 2012 through 2015.

Eierman, who finished fifth, fourth and third in three NCAA appearances for Mizzou, transferred prior to the 2020 season and will finish out his college career at the University of Iowa.

CBC’s Joshua Saunders won state titles to cap his freshman, sophomore and junior seasons but decided to bypass most of his senior season this winter and spend substantial time at the United States Olympic Training Center in Colorado Springs, Colorado. Saunders, who had a record of 117-10 with the Cadets, has a scholarship to Cornell University.

JOHNSON ON THE MOVE?

Johnson won at 106 as a freshman, at 113 as a sophomore, at 120 as a junior and at 126 as a senior, beating the same competitor, Seckman’s Cameron Fusco, in four consecutive district championship and state championship matches.

“When you look at what he’s accomplished over the last four years — four-time state champion, winning the Ironman, winning at Fargo, winning two Greco-Roman national titles and going to represent the U.S. at the Junior World Championships twice — I think you can make a pretty good argument for Malik being the best high school wrestler Missouri has seen,’’ CBC coach Cornell Robinson said in March of 2018.

Johnson started his college career at Missouri and went 9-2 as a redshirt freshman in 2019. But he’s no longer with the Tigers.

“It looks like he’s going to wrestle for Central Methodist,’’ Robinson said earlier this week. The new NAIA program in Fayette, Mo., is coached by Terrel Wilbourn, a three-time state champ at Francis Howell Central High who went on to win an NJCAA title at Iowa Central Community College before finishing third, second and first, going 25-0 as a 157-pound senior, for Lindenwood University.

“I’ve coached some good ones, but Malik was as good as I’ve seen at the high school level,’’ Robinson said. “He was smart and athletic and always seemed to know exactly what he needed to do to get results. He’s very competitive and blessed with a lot of natural ability.”

Became one of just 32 four-time champions in Missouri wrestling history when he won the Class 4 title at 126 pounds as a senior in 2018. That followed titles at 106, 113 and 120. All-Metro wrestler of the year in 2018 helped lead CBC to its first team state championship that season. He was 30-0 as a senior and 141-11 in four seasons. Signed with Mizzou, now at Central Methodist.

A three-time state champion, Frankowski is serving in the U.S. Navy. As a Falcons junior, he showed tremendous class and sportsmanship when he raised the arm of an injured opponent after being awarded the championship via medical forfeit.

The area wrestler of the year in 2017, Hagan was a four-time finalist with a career record of 182-6. After losing in overtime to finish his first two high school seasons, he went 42-0 as a junior and 48-1 as a senior, winning back-to-back state titles. Earlier this year, he earned his first NCAA Tournament berth for Ohio University.

A four-time state champion, McAteer finished his career with a record of 191-10 and won Class 1 titles at 106, 113, 120 and 126. He recently completed his freshman season wrestling for the Army at West Point.

The 2020 wrestler of the year, Odom capped brilliant career by winning the Class 3A title at 160 pounds to cap 50-1 season and 193-11 career. Became only second state champ in Edwardsville history. Illinois recruit finished third as a freshman and sophomore and had junior season ended by concussion at state tournament.

The Post-Dispatch wrestler of the year in 2019, Orine finished third, first (113), first (120) and first (126) in his prep career, finishing with a 196-11 career record. He recently wrapped up his freshman season at North Carolina State, which has won the last two ACC titles.

A three-time time Class 4 state champion, Saunders elected to bypass his shot at a four-peat to spend time training at the U.S. Olympic Training Center in Colorado Springs, Colorado. The 145-pounder finished with a career record of 117-10 and has signed with Cornell.

A three-time Class 4 state champ who finished third as a freshman, Shannon spent a year at the Olympic Training Center and is now in the program at the University of Illinois. In high school, he started out as a 138-pounder and finished as a 182-pounder.

The 2016 wrestler of the year, Smith (193-11) won three Class 4 state titles and added a third-place finish. He earned an NCAA trip as a true freshman at Appalachian State, spent a season at Missouri and is competing at Lindenwood.

The 2013 wrestler of the year, Spraggins won the Class 3A title at 138 as a senior. He was second as a freshman and sophomore, fourth as a junior. Finished with a career record of 165-11. In college, he wrestled at Arizona State and McKendree.

The first from the Tigers’ powerful program to capture a state title, Surtin won at 113 in Class 3A as a junior in 2018. He placed fifth as a sophomore and was runner-up at 120 as a senior. With a career record of 184-16, he recently completed a redshirt season at the University of Missouri.

Won three consecutive state titles for the Spartans and went on to similar success in college, winning a junior college title in Iowa before becoming Lindenwood University’s first national champion in 2016. He’s the head coach at Central Methodist.

A three-time state champion who finished with a 168-8 record, Wingbermuehle won at 120 as a sophomore, 132 as a junior and 145 as a senior. Started college career at Oklahoma and finished at McKendree.

A four-time finalist went 191-6 and won state titles in sophomore and junior campaigns.

Danny’s twin and another Illini starter, he placed fifth, first and first in high school.

Three-time medalist won successive titles and is a starter at heavyweight for Columbia University.

Wrestler of the year in ’15 won the last 74 matches of his prep career, competed in college at West Virginia, Mizzou.

Wrestler of the year in 2011, four-time medalist and two-time champ won final 65 matches of his career.

Four-year starter at Arizona State, Kraus won a pair of state titles and had a third-place finish with the Jags.

Had 203 wins with 155 pins for the Indians; three-time medalist finished with successive titles.

The 2012 wrestler of the year, Slyman won 80 of his final 81 high school matches, winning consecutive titles.

Third as freshman and sophomore and won Class 1 titles as junior and senior. Went on to North Carolina State.

Two-time state finalist went 34-0 to win at heavyweight in 2019. Started this season at Old Dominion.

Went 47-0 as a senior, winning a title at 195; state runner-up in sophomore and junior seasons.

Four-time medalist won all 47 of his senior-year matches to win at 195, earned scholarship to Mizzou.

Finished as state runner-up in 2019 and went 43-0 to win Class 3A championship at 120 pounds this season as a junior.

A junior, he’s wrestled in three finals, winning the last two. Has given an early commitment to Princeton.

After runner-up finishes as a freshman and junior, Pearce won the Class 2A title in 2012.

Three-time finalist won at 195 as a 37-0 junior; went on to wrestle at Maryville.

A gifted student-athlete, he finished third, fourth, second and first in high school and qualified for four NCAA trips at North Dakota State.

Three-time medalist and two-time finalist won the title at 113 in 2018 and now is at Mizzou.

Four-time medalist finished third, fourth and second before going 36-0 in winning at 220 this season in Class 4. 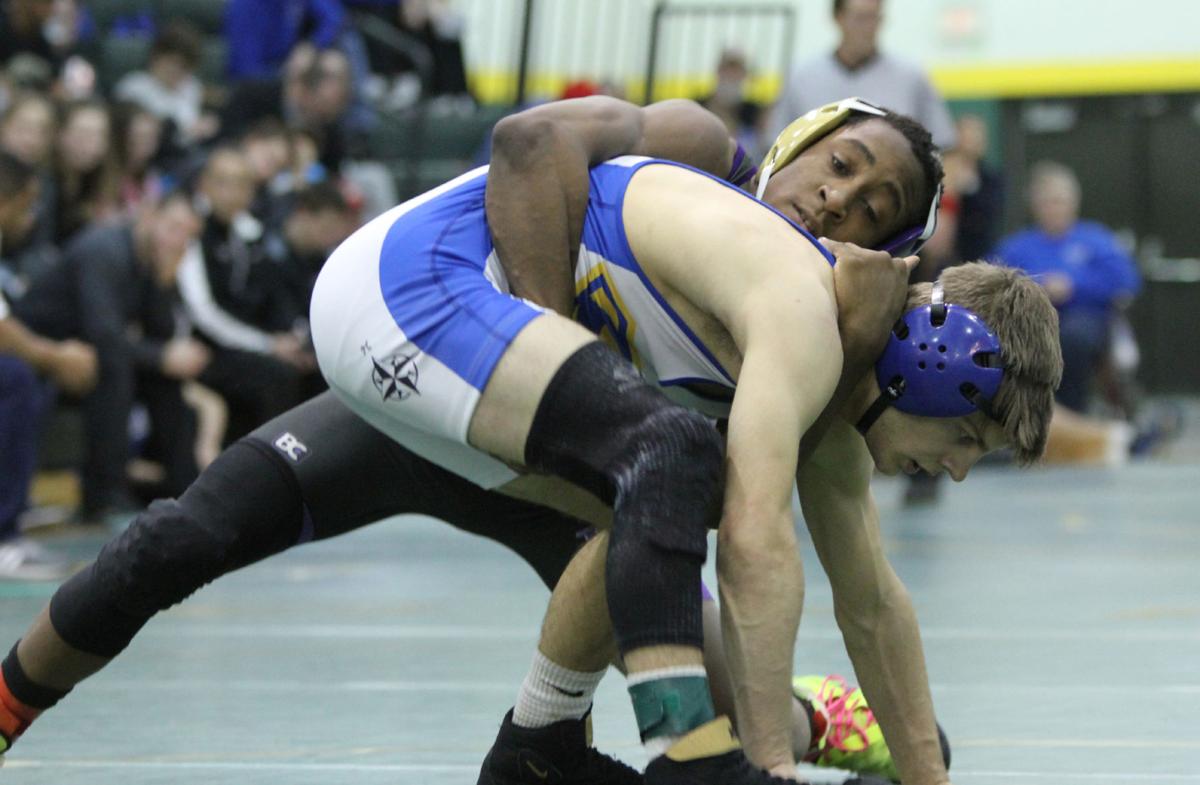 Mike McAteer of Whitfield points to the crowd after winning his Class 1 semifinal match at 120 pounds at the Missouri Wrestling Championships on Friday, February 17, 2017 at Mizzou Arena in Columbia, Mo. Paul Kopsky, STLhighschoolsports.com