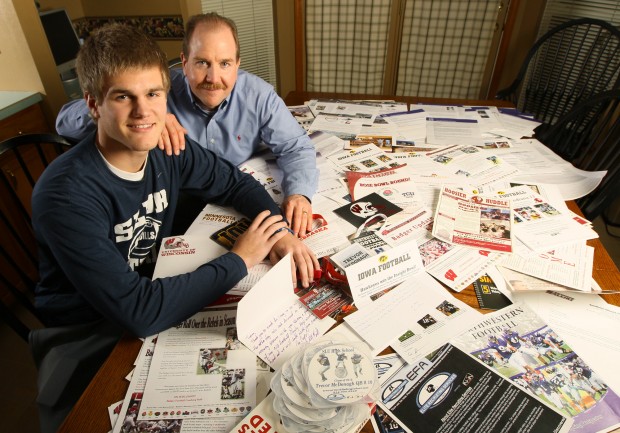 St. Louis University High junior quarterback Trevor McDonagh is being recruited as a potential Division I college quarterback. He poses for a portrait with his father, Michael McDonagh, and a variety of correspondence from colleges and recruiting services in the family's home in Oakville. (Chris Lee / clee@post-dispatch.com) 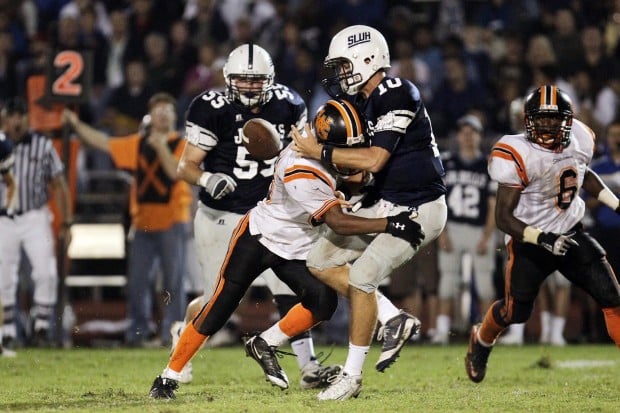 Like many high school athletes, Trevor McDonagh has a dream of playing college football.

As a junior at St. Louis University High, McDonagh finished seventh among area quarterbacks, with 2,465 passing yards; he had 23 touchdown passes and 16 interceptions.

But even with a dream and perhaps the tools to play at the next level, McDonagh faces another hurdle — getting noticed by college programs.

And while some athletes and their parents choose to take on the challenge of sorting through their options, myriad eligibility and scholarship rules, preparing résumés, writing e-mails, phoning coaches, etc., others are calling in the reinforcements.

Enter college recruiting services, a growing industry where high school athletes and parents can turn for help in gaining exposure and making contact with colleges. The Internet has made such services abundant. Most will set up a profile and offer tips and links to the NCAA information for free, but they also offer packages of paid services — at costs of $750 and up — that can include talent evaluation, video preparation and sending an athlete's information to coaches around the country.

And that's the million dollar question: Is it worth it?

Although many college coaches say they don't look at e-mails from the recruiting services, for families that have already spent money for years for summer leagues, camps and the like, it's just another investment in pursuing a college scholarship.

"Free advice isn't always the best advice, not only because of the peace of mind but the expertise we bring," says Joseph Curtis, a vice president of the National Collegiate Scouting Association, one of the oldest and largest recruiting services, which touts an average scholarship award of $18,000 to 90 percent of its users. "You have to ask yourself, 'What's at stake?'"

To help Trevor McDonagh pursue his dream, his family has enlisted the help of Elite Football Academy, where former and current Missouri quarterbacks Blaine and Tyler Gabbert, respectively, trained. McDonagh now has a couple of snazzy videos and has attended national-level camps and combines, most recently last weekend.

The extra work has paid off. McDonagh has generated interest from such schools as Iowa, Northwestern, Wisconsin, Kansas State and Indiana and will attend a day for selected junior recruits to Iowa next month.

"You can't take anything for granted. That handwritten letter from Iowa was nice. It made us feel special," McDonagh's father, Michael, said. "But last week, as we were leaving the combine, a lot of people said, 'We'll see you in Iowa.' So the letter gets watered down a little bit."

Like most parents who hope to see their children play in college, the McDonaghs have learned a few cold, hard facts that led to the conclusion that getting recruited is a business venture:

• Less than 1 percent of high school athletes will play on a scholarship at the Division I level.

• Not all Division I schools provide full athletic scholarships in nonrevenue sports.

• The NCAA's eligibility rules are complicated.

• Scholarship opportunities exist at Division II, III, NAIA and junior colleges, but each has its own set of dizzying requirements.

McDonagh has used NCSA's free services and found them "invaluable" and is considering one of its premium packages. Some services charge a one-time fee, ranging from $75 to $2,500, depending on how much material they prepare and how many coaches they send it to. Others charge from $20 to $50 a month.

"I'm only considering NCSA because they can cast a wider net for us," McDonagh said. "If it wasn't for the price, I'd be all over it. The people are quality."

'the equivalent of spam'

The caveat is that some college coaches don't trust all the services, in part because coaches think they inflate the athlete's reputation. In addition, the recruiting services often inundate coaches with information.

Washington University men's basketball coach Mark Edwards called the unsolicited e-mails he gets from recruiting services "the equivalent of spam. It's pretty easy to figure out our academic requirements. They're listed in all the books. What a recruiting service can't figure out is the type of player we look for."

He estimated that he receives five or six e-mails a day from recruiting services touting a student who isn't a fit, either athletically or academically.

Lindenwood men's basketball coach Brad Soderberg agreed that the services can't pinpoint the right fit the way his own staff can.

"Right now, I probably have 50 e-mails in my trash folder. Ten are from Southern California. Ten are from Texas," Soderberg said. "Why would I go there when I have the same kind of athletes here? We try to focus on kids we can see for ourselves."

The area coaches also said they appreciate the personal touch, which seems best accomplished through the do-it-yourself approach.

"I hate to admit it, but when I get e-mails from scouting or recruiting services, I don't open them," Soderberg said. "And, if the first sentence sounds like a form letter, I don't go any farther. But if a player takes the time to include some information that lets me know he knows something about the program, I'll read it and I'll watch his DVD."

There is another down side to the recruiting services, according to Laurie Richter, author of "Put Me In, Coach" — a do-it-yourself guide for parents to finding athletic scholarships.

"There's no certification or credentialing," Richter said "Anybody can hang a shingle and charge a fee."

On the other hand, Richter acknowledged, "Parents and kids can really lock horns over this. Sometimes it's good to get a third party involved that kids are more apt to listen to."

Parents and athletes can do it themselves. But be warned: Researching to find a good fit takes time. Richter estimated that she spent 50 hours putting together a video and researching schools' websites to find programs that matched the athletic and academic wish list of her son, Dylan, a junior now playing basketball at Washington University.

That time was in addition to the hours devoted to AAU teams, clinics, showcases and summer camps and the time Dylan invested in writing a résumé, contacting coaches and studying to get the GPA and ACT scores to ensure admission to Washington U. Her book lays out their journey, step by step, and provides a blueprint for parents.

"Nobody cares more about your son's or daughter's future than you," she said. "No one has a bigger stake in a child's future than a parent or child."

Parents also can start the process free through a webinar sponsored by the Illinois Coaches Association at www.icacoach.org. Elder said the group posted the webinar "to educate parents and to clear up some of their misconceptions and to answer some of the questions."

Tim Twellman, soccer coach at Villa Duchesne, also offers a free presentation to parents to help them learn the ins and outs of college recruiting and scholarships.

"The horror stories I hear are the ones where the parents don't get involved in recruiting," Twellman said. "They think playing for a club team or AAU team will get them recruited. They have a dream, but they don't pursue it. They have to work to get noticed."

Even when a family puts in the work, though, as the McDonaghs have done, the right path is uncertain.

"I do a lot on my own, sending letters, searching the Internet to find out who the recruiting coordinator from Stanford is," Michael McDonagh said. "Even with a service, Trevor would have to make phone calls. He's a quiet kid, so it's tough for him. You have to wonder if the service would be worth it."

The top 30 high school football recruits in the St. Louis coverage area. Click on the recruit for more information.

University will not pursue further appeals of basketball prospect's eligibility.

No indication from university that Tony Mitchell and Sheldon Richardson have enrolled.

Some sage recruiting advice -- for free

St. Louis University High junior quarterback Trevor McDonagh is being recruited as a potential Division I college quarterback. He poses for a portrait with his father, Michael McDonagh, and a variety of correspondence from colleges and recruiting services in the family's home in Oakville. (Chris Lee / clee@post-dispatch.com)

September 10, 2010 - A fumble by SLUH QB Trevor McDonagh (10) and the tackle by Webster Groves' Demetri Westbrook (53) in the second quarter leads to a recovery by Webster Groves in Friday's match between SLUH and Webster Groves at Moss Field in Webster Groves. Erik M. Lunsford elunsford@post-dispatch.com
© Copyright 2020 STLtoday.com, 901 N. 10th St. St. Louis, MO | Terms of Use | Privacy Policy
Powered by BLOX Content Management System from TownNews.com.
You don't have any notifications.