Breakdown: The records aren’t pretty but neither matter much to either coach. John Burroughs skipper Corey Frazier and Whitfield coach Mike Potsou are among the most accomplished coaches in the area. Frazier guided Maplewood-Richmond Heights to a pair of state titles. Potsou has taken Whitfield to four semifinals since 2009.

Burroughs and Whitfield will be a tough out in their respective district tournaments. It’s always fun to watch Frazier and Potsou match wits on the sidelines.

Tickets: $10 at the door. Presale started at Vashon Monday afternoon.

Breakdown: The best team in the city will be crowned when this one is over. CBC brings North Carolina recruit and All-American senior guard Caleb Love. Vashon counters with senior swingman and Kentucky signee Cam’Ron Fletcher. Both Love and Fletcher are crucial to their teams but they are not the whole reason for their success.

The Cadets rely on sophomore point guard Rob Martin to distribute and handle the ball which will be crucial against Vashon’s sticky defense. Junior forward Chevalier Brenson is a strong defensive player capable of scoring at all three levels. Senior forward Mike West (6-foot-3) is the biggest interior presence and will have to play big to match Vashon’s size in Fletcher (6-foot-6), senior forward Kobe Clark (6-foot-7) and junior forward Nick Kern (6-foot-5).

Vashon’s cast also includes senior guard and Southeast Missouri State signee Phil Russell, who is a knockdown shooter that has put up 20 points in a quarter before. He can catch fire at any time. Kern has become a huge presence rebounding the ball and significantly improved his free-throw shooting this season.

Vashon coach Tony Irons will lean on his bench early and often in search of the right mix.

Breakdown: After taking its lumps following longtime coach Mike Waldo’s departure, Edwardsville has turned this winter with its first 20-win season since 2017. The Tigers play at their pace. They average 49 points per game, fewest in the Southwestern Conference. But they give up 38 points per game, the best in the Southwestern Conference. They’ve won 10 in a row following a forfeit victory awarded to them after East St. Louis self-reported the use of an ineligible player last week.

Collinsville went into a four-game funk where it struggled to score. The Kahoks broke out a bit in their 69-46 win at Alton Friday. It was the first time in four games they scored more than 59 points.

Breakdown: After an ugly 74-44 loss to Vashon, Trinity has bounced back with a pair of wins over O’Fallon Christian and Duchesne. The Titans got a more well-rounded offensive attack with Jordan Fulton and TJ Rush scoring in double figures against O’Fallon Christian. Senior center and Creighton signee Ryan Kalkbrenner (7-foot) had 20 points and 12 rebounds in the win. Senior guard and Central Michigan signee Rashad Weekly suffered a shoulder injury last week but has been playing through it. He scored 14 points against O’Fallon Christian and is critical to the Titans success with his ball handling and ability to create for his teammates.

McCluer has won three in a row and seven of its last eight with its only loss in that stretch coming at Cardinal Ritter. Senior swingman Devon Barshow has led the way averaging nearly 15 points and six rebounds as the Comets eye an extended postseason run in Class 4.

Breakdown: Hazelwood Central has won four in a row after taking back-to-back losses to De Smet and Chicago Simeon. The Hawks have played a brutal schedule that includes CBC, East St. Louis, De Smet, Trinity, Chicago Morgan Park and Chicago Curie. They’ll get a good test on Tuesday when they play at Webster Groves.

Breakdown: The Metro Catholic Conference champion will likely be decided in this contest. De Smet won the first matchup 61-45 at the Palace on Ballas to break a 16-game losing streak to CBC.

CBC coach Justin Tatum had not lost to De Smet since he took over the top job at the start of the 2013-14 season.

The Spartans split with Chaminade to give them a 5-1 league mark entering Friday’s showdown. They end their league schedule at home against St. Louis U. High on Feb. 25.

CBC is 5-1 after sweeping Chaminade and St. Louis U. High. All that remains is a road game at Vianney in the regular-season finale on Feb. 27.

De Smet’s cast of underclassmen have powered it this season as the backcourt of Brian Taylor and Jeremiah Walker have combined to average more than 20 points per game. Junior posts Yaya Keita (6-foot-9) and Sekou Gassama (6-foot-10) are good for nearly 17 combined rebounds and three blocked shots per game.

Lone senior Michael Skoff has given De Smet what it needs depending on the night. A tough on-ball defender, he’s contributed nine points, four rebounds and hit better than 76 percent of his free throws.

Breakdown: O’Fallon kept its Southwestern Conference championship hopes alive by rallying past Belleville East in the final three minutes for a 57-52 win Friday night. The Panthers are 7-2 in the league while Collinsville is 7-1.

O’Fallon has started to adjust to life without 6-foot-7 junior forward Shaun Riley II, who has been out with an illness. He’s expected to be reevaluated this week to determine if and when he can return this season.

East St. Louis will try to bounce back after losing at Belleville West 55-49 on Friday. The Flyers have spread the scoring wealth around with LaShawn Johnson, who is leading the way with 11.6 points per game, and Jashawn Anderson, who averages 10.6 points per game. Heralded freshman guard Macaleab Rich is putting up 9.7 points and 5.5 rebounds per game. 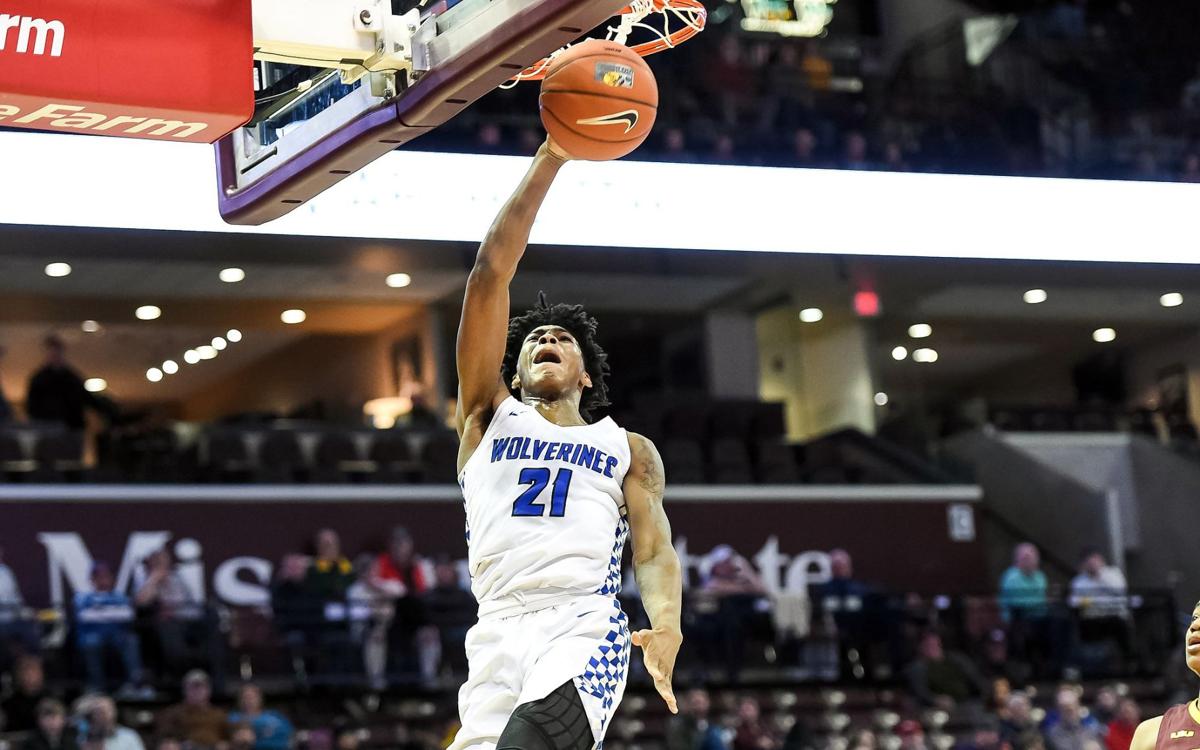 Vashon's Cam'Ron Fletcher dunks on a fast break during a 36th Annual Tournament of Champions first round basketball game against Christ The King on Thursday, Jan. 16, 2020, at Missouri State JQH Arena in Springfield, Mo. Randy Kemp | Special to STLhighschoolsports.com 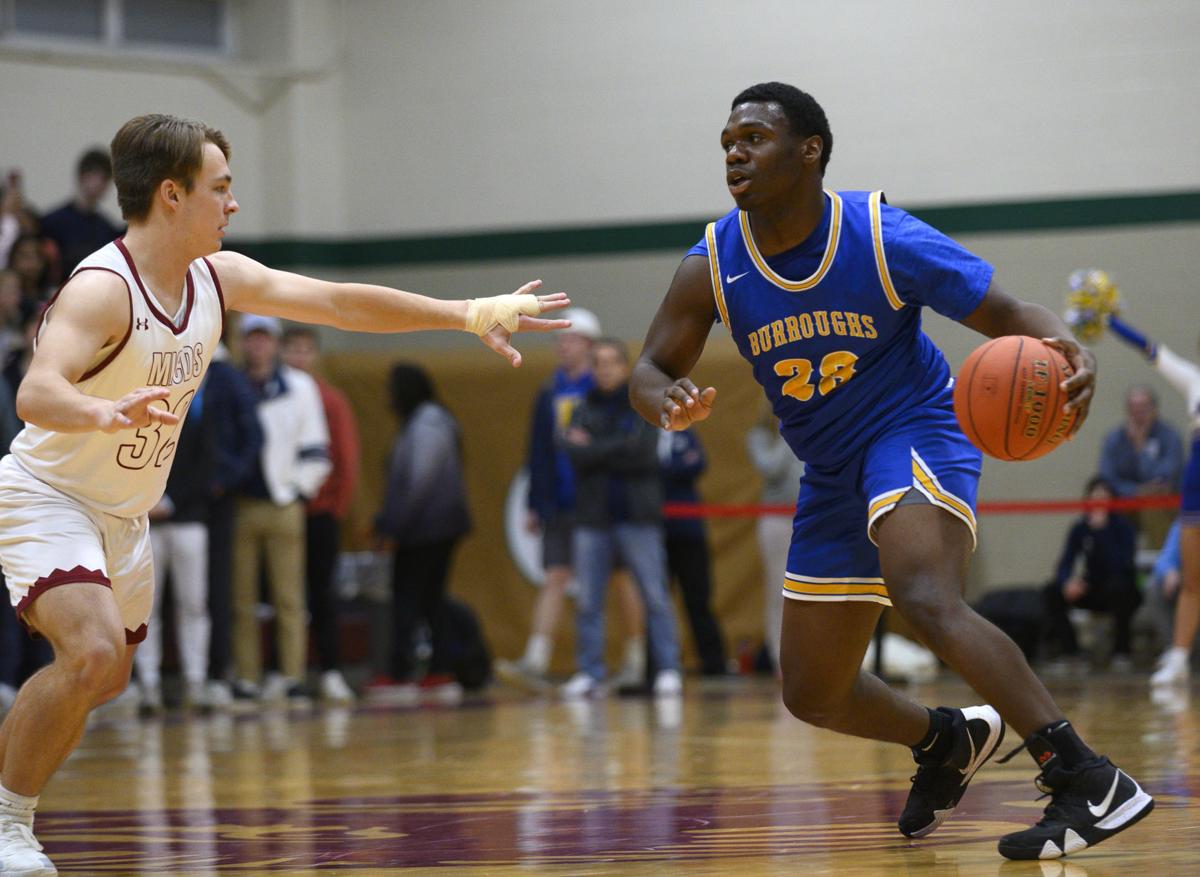 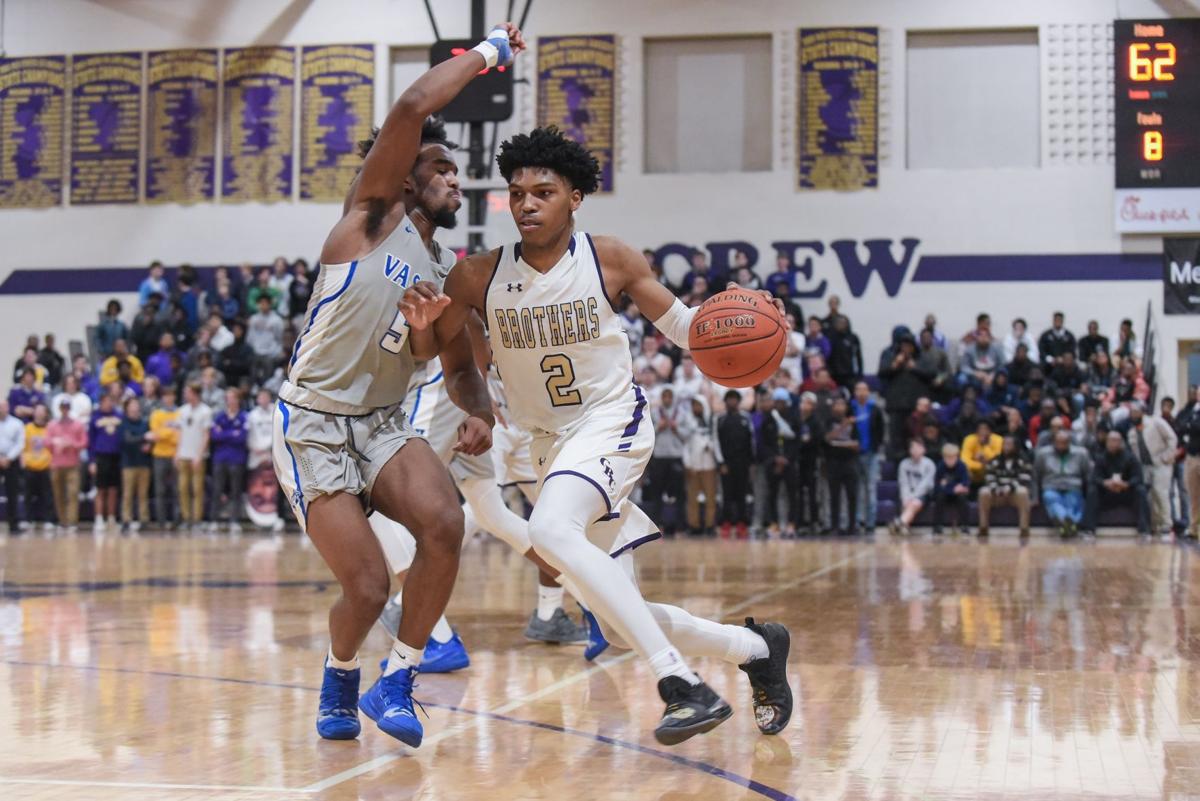 CBC junior Caleb Love (2) goes up against the defense of Vashon senior Donyae McCaskill (5) in a game on Wednesday February 6, 2019 at Christian Brothers High School in Town and Country MO. Rick Ulreich special to STLhighschoolsports.com 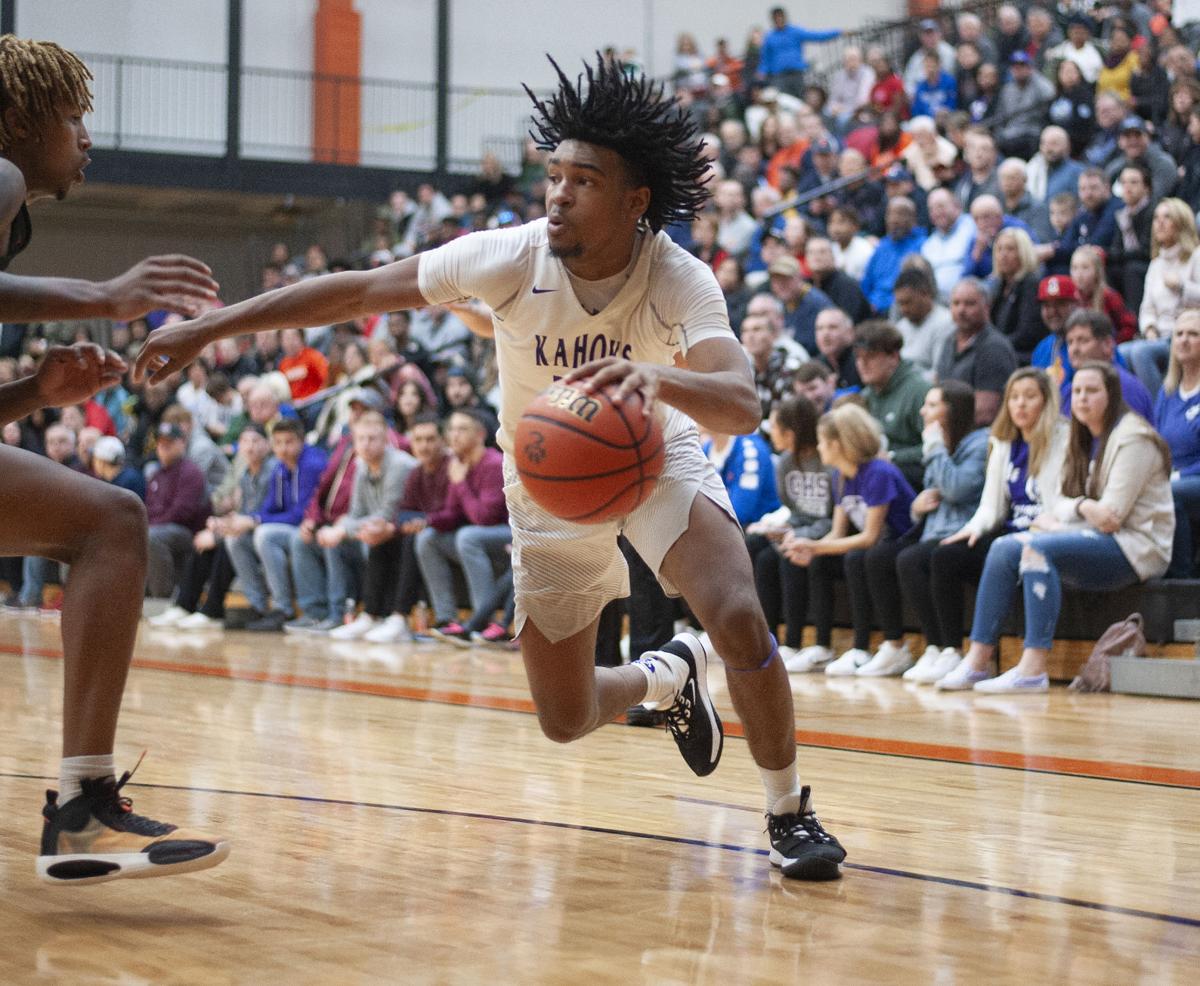 Collinsville's Ray'Sean Taylor (13) drives to the basket during a game in the Edwardsville Shootout on Saturday, December 14, 2019 at Edwardsville High School in Edwardsville, Ill. Paul Halfacre, STLhighschoolsports.com 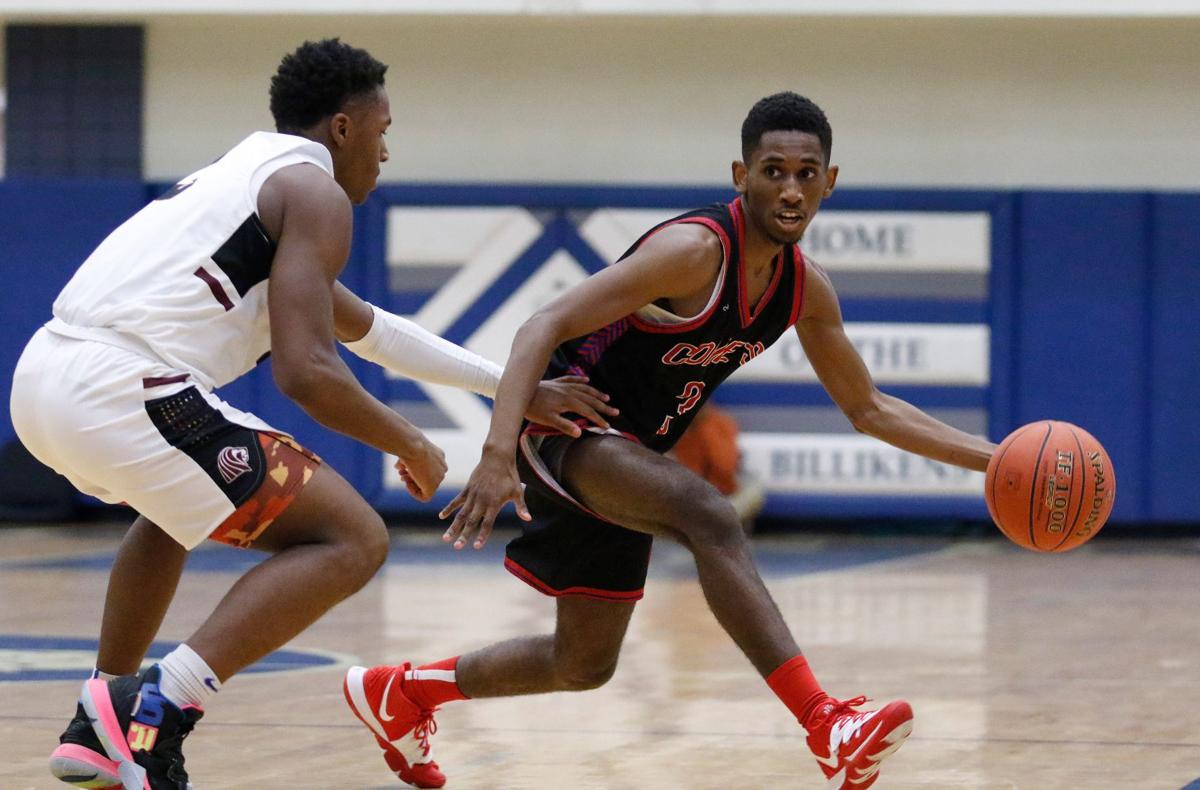 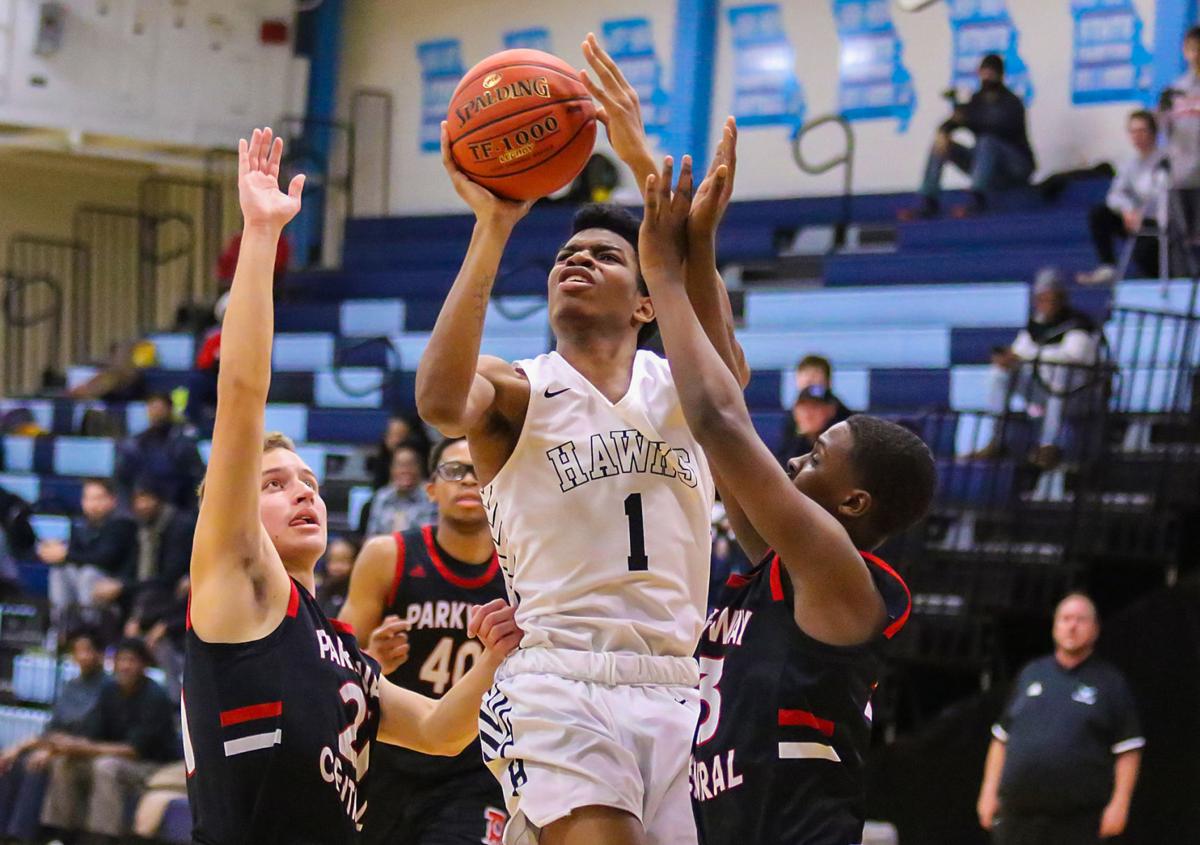 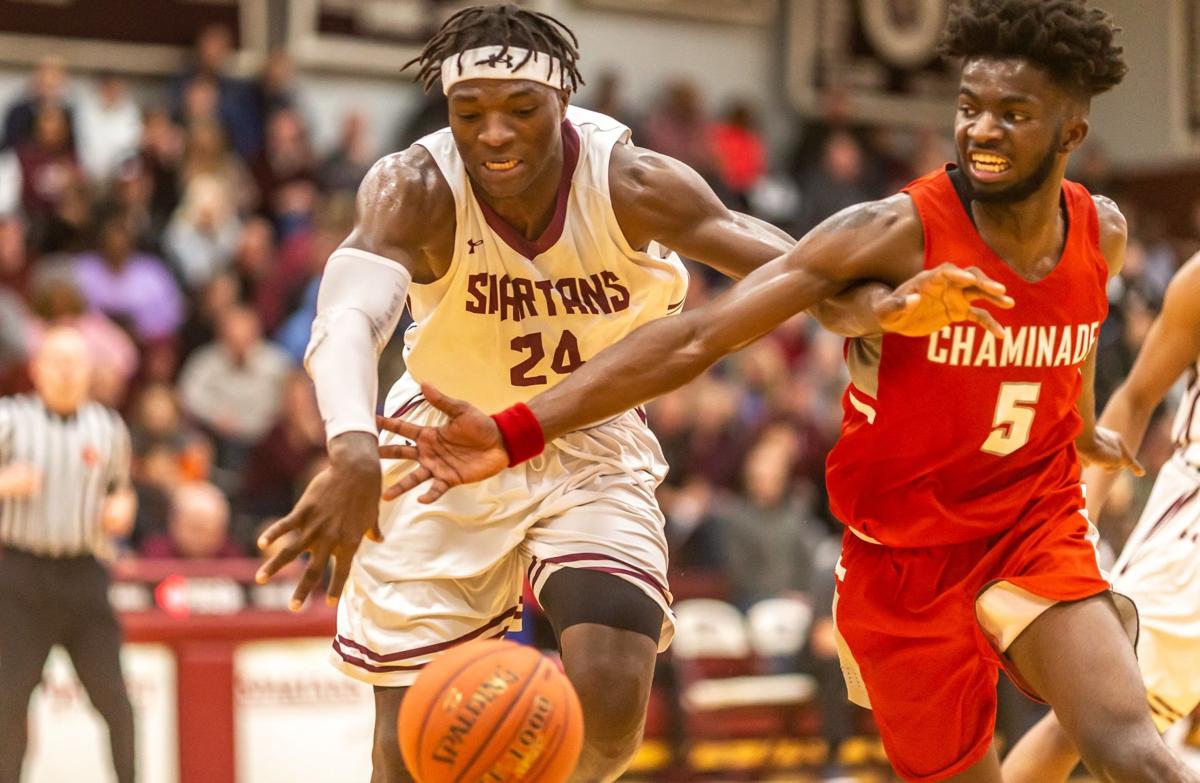 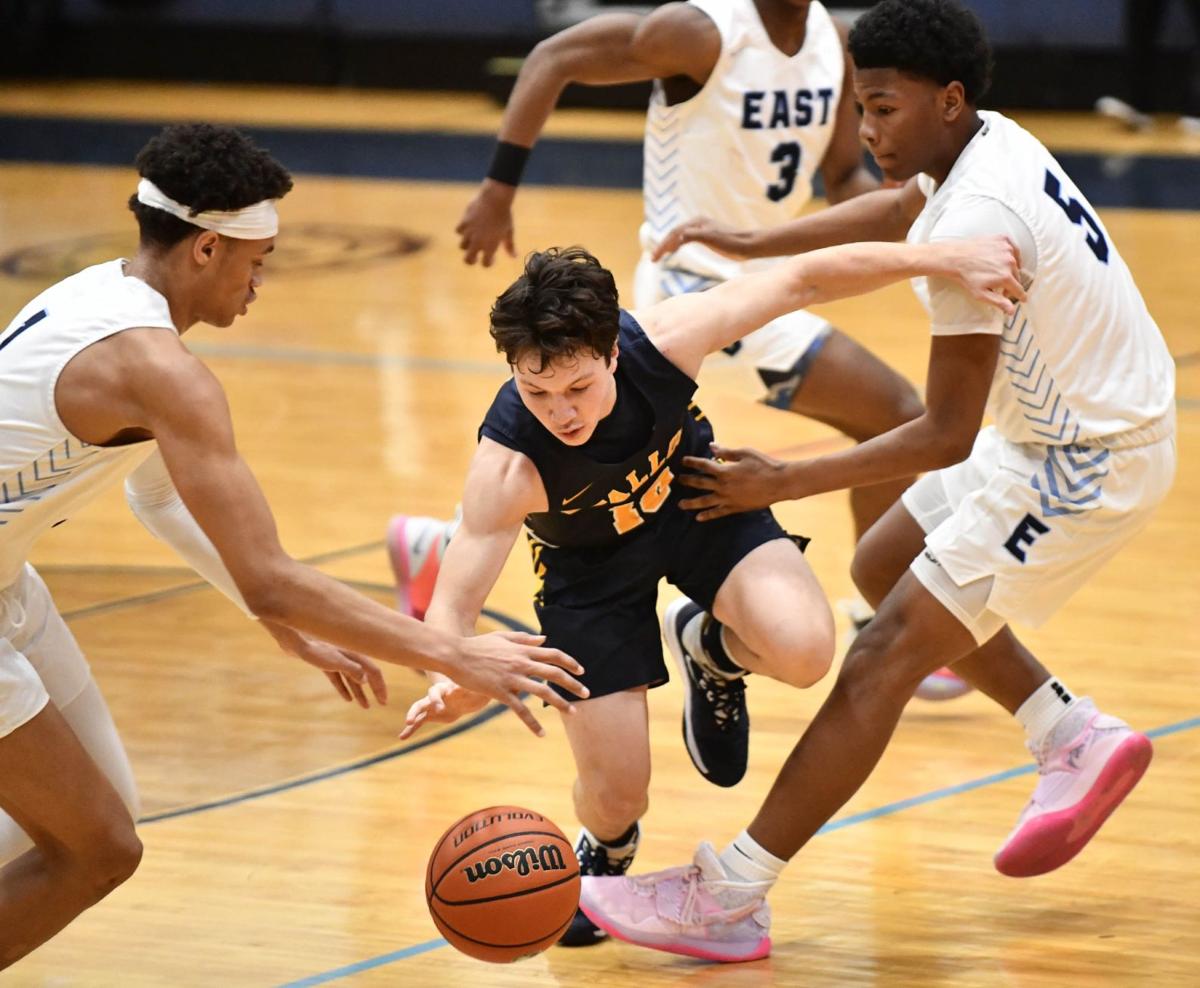