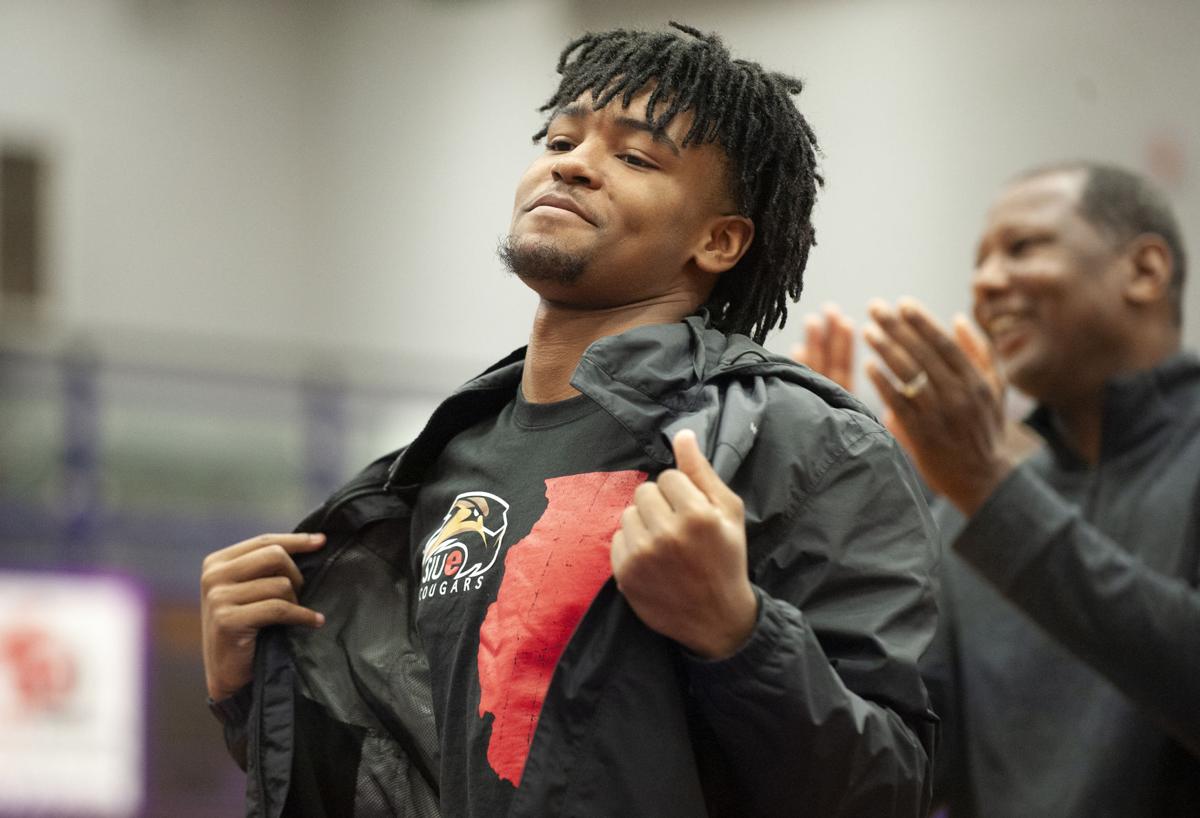 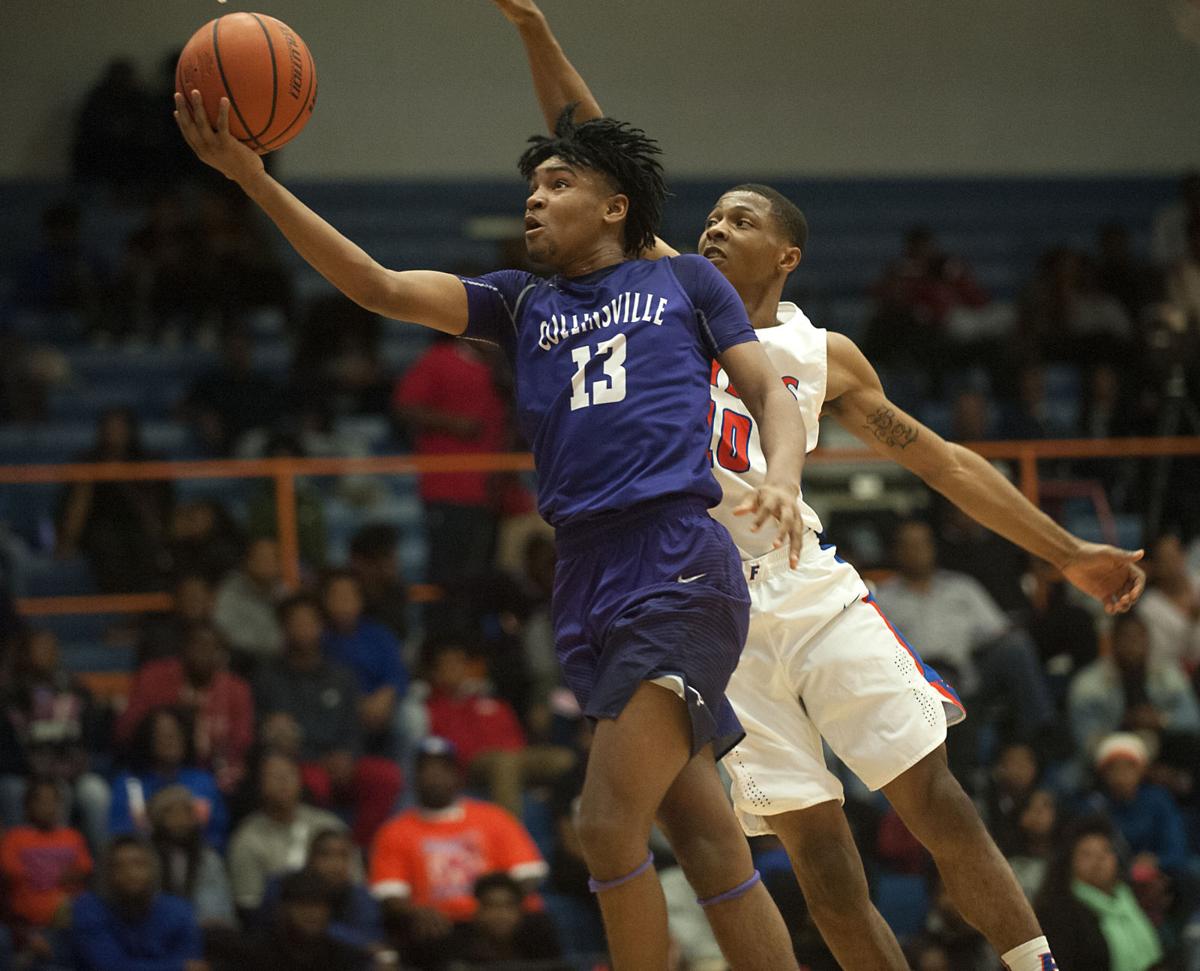 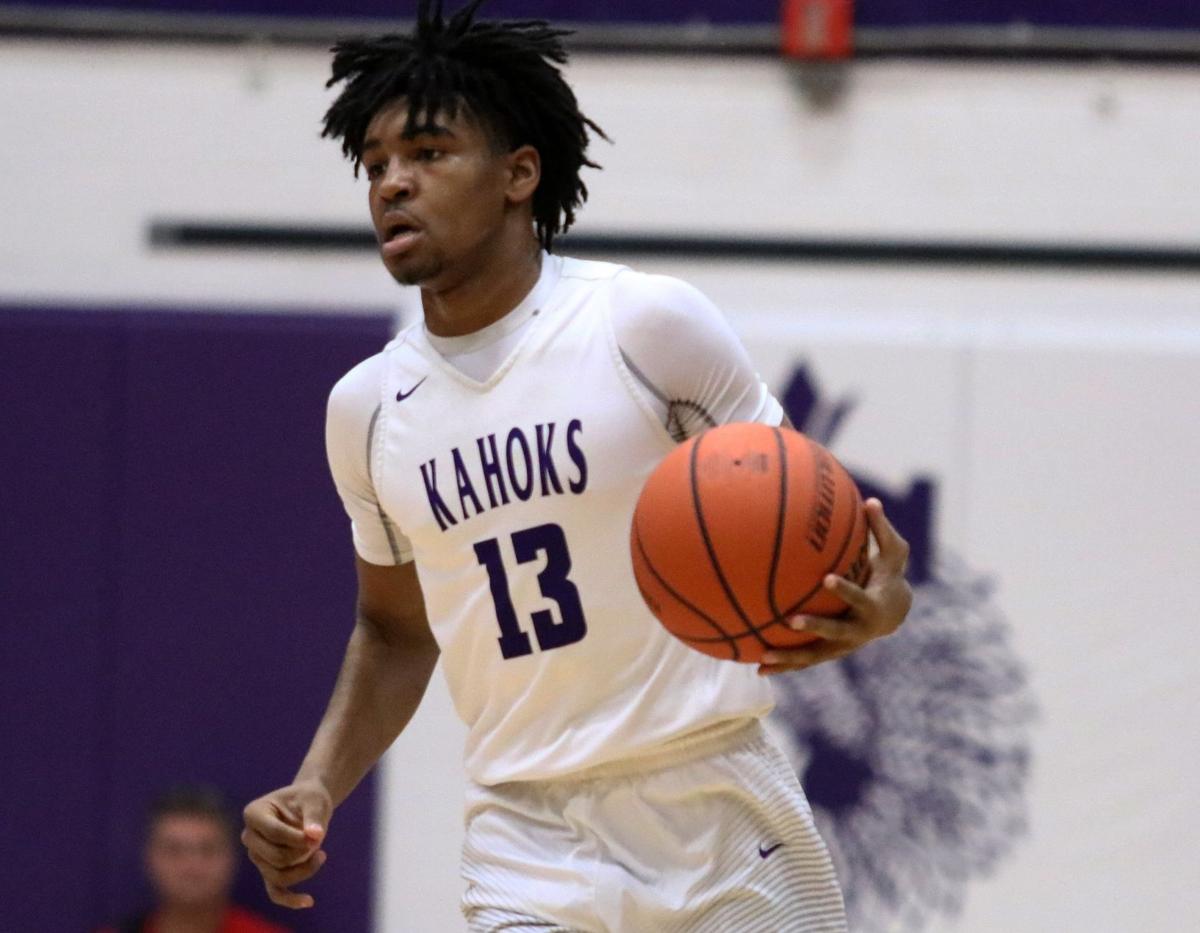 Ray'Sean Taylor of Collinsville brings the ball up court against Alton at the Class 4A Collinsville Regional championship game in Collinsville, Illinois on Friday, March1, 2019. Paul Baillargeon / Special to STLhighschoolsports.com 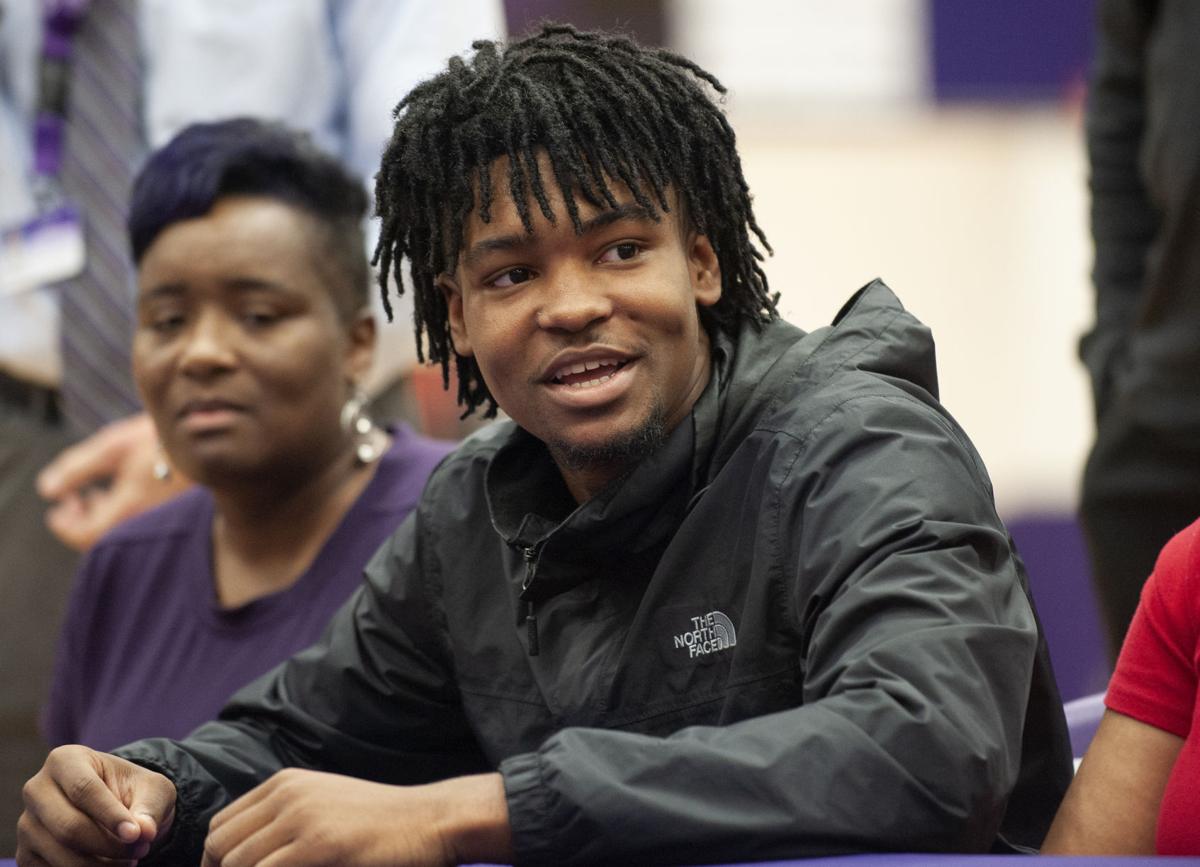 Collinsville's Ray'Sean Taylor thanks the crowd for coming to his commitment ceremony on Tuesday, October 8, 2019 at Collinsville High School in Collinsville, Ill. Paul Halfacre, STLhighschoolsports.com 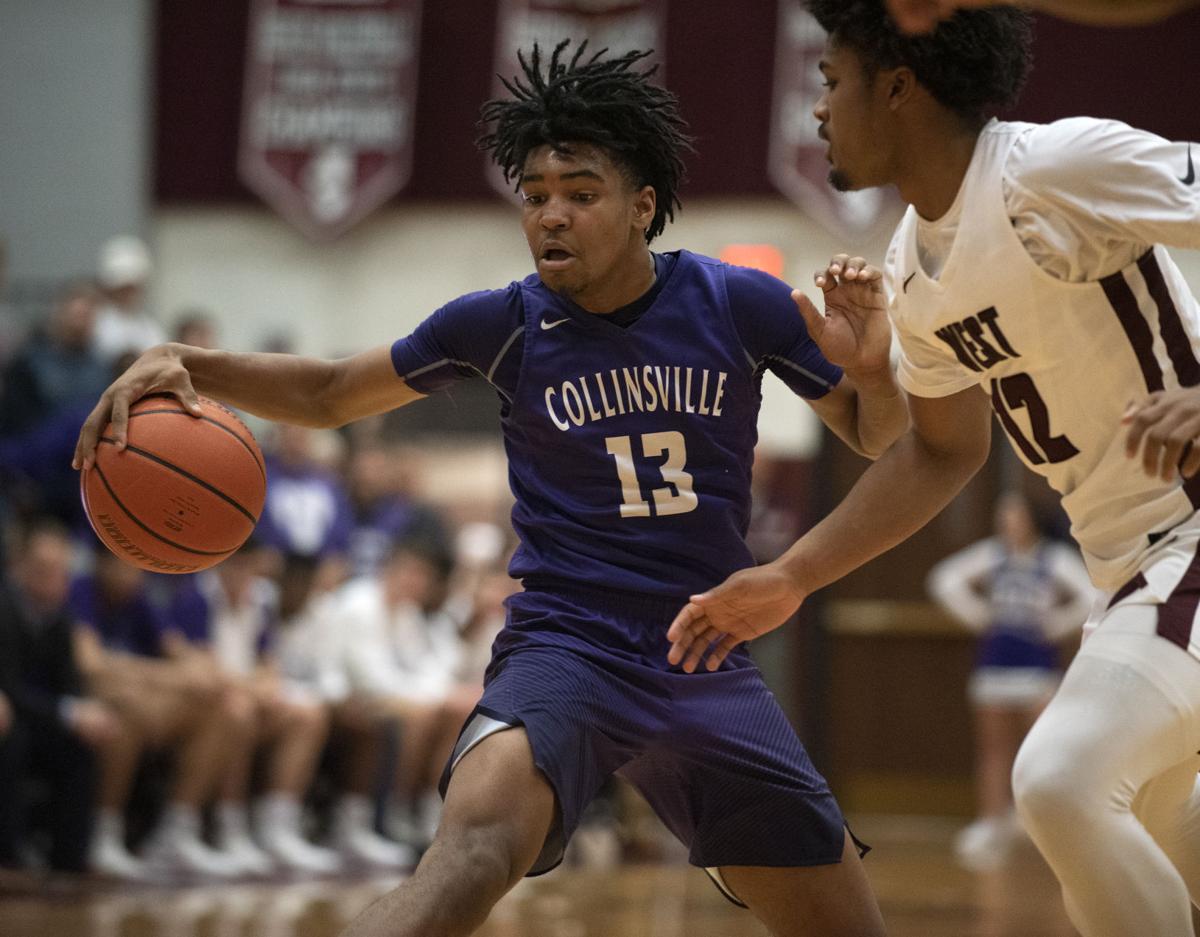 Collinsville's Ray'Sean Taylor (13) attempts to get around Belleville West's Will Shumpert (12) during a game on Tuesday, February 5, 2019 at Belleville West High School in Belleville, Ill. Paul Halfacre | STLhighschoolsports.com 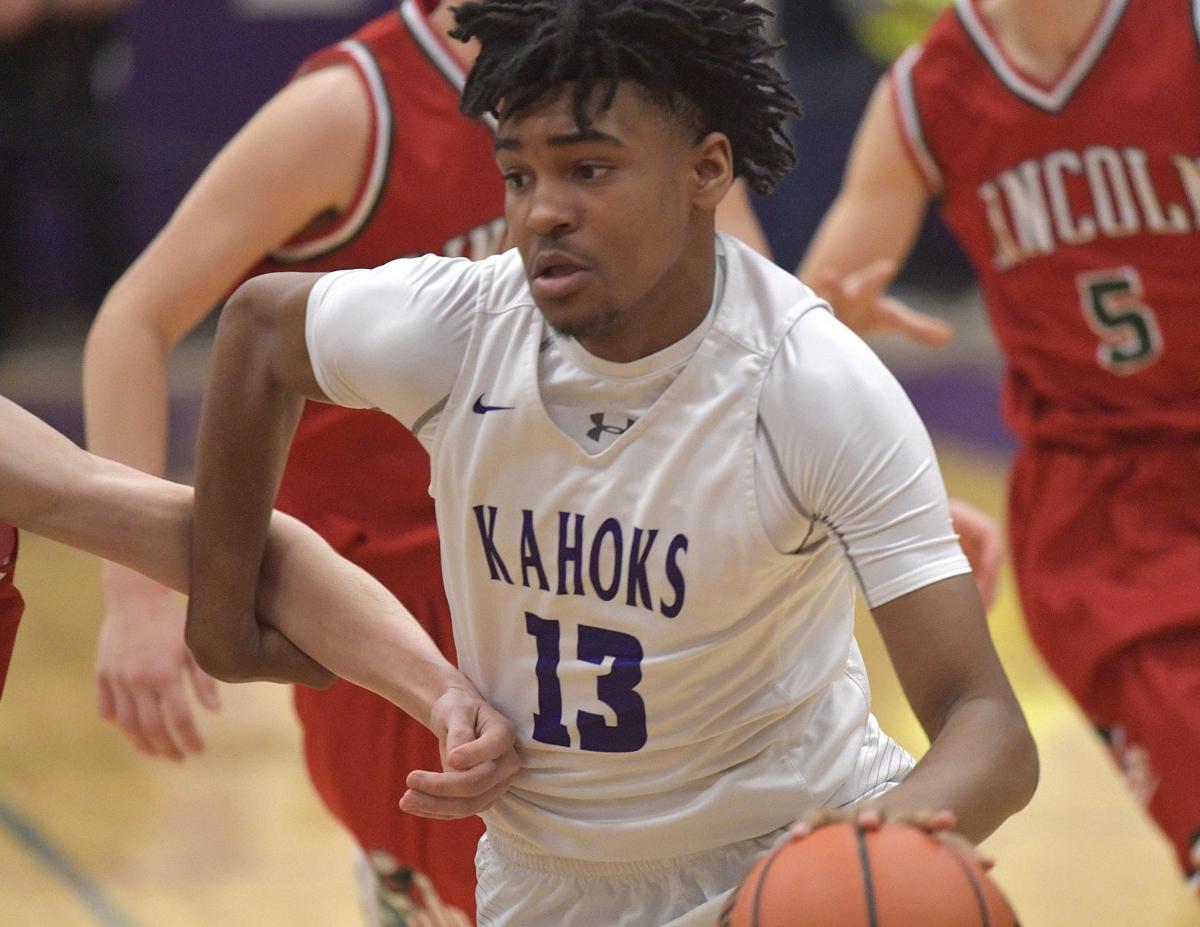 COLLINSVILLE — Ray'Sean Taylor has supreme confidence he can get to the rim whenever he wants to.

It's a mindset the Collinsville senior guard has had since he was in middle school. But a simple message from a coach taught him how to expand his offensive game even further and helped him become the Division I-caliber player he is today.

"I'll never forget that (message)," Taylor said. "It changed my entire game. I used to literally drive every play and I'd fall every play. Once I started pulling up and I got into rhythm, it came natural."

The message, delivered by AAU coach Deryl Cunningham nearly five years ago, helped turn Taylor into one of the most prolific scorers in the area.

His scoring prowess, leadership on the court and ability to distribute the ball garnered the attention of multiple schools. But on Tuesday, Taylor wrapped up his recruiting by committing to Southern Illinois University Edwardsville.

"It was a tough decision for me," Taylor said. "A lot of schools all over the place were trying to get me. After a while, you find out the real love and the fake love. I always knew that coach (Brian) Barone wanted me. I believe in him and trust in him. I trust the whole program and I feel like that we can make some things happen."

The 6-foot-1 guard was one of two players last year to score over 700 points. His 706 points were second only to Belleville West's and Post-Dispatch All-Metro player of the year EJ Liddell (749).

Coach Darin Lee knew he had a special player when Taylor joined the program as a freshman.

"He was fearless as a freshman," Lee said. "He could handle the ball under pressure. As the season went along, he was able to score for us. He's able to finish around the rim in a variety of ways."

His ability to drive was never in question, but working in the offseason with Cunningham helped improve his jump shot and his outside game.

"Ray's ball handling ability as a youngster was exceptional," Cunningham said. "In my opinion, he didn't shoot the ball well (back then), but it's something we concentrated on and he got very good at it. To combine that with his ability to drive and finish, which I think is at a high level, you've got a good basketball player."

The prolific scorer sits at 1,363 career points in his three seasons at Collinsville. Taylor is 678 points away from tying the school record set by Tom Parker in 1968.

Added Lee, "(The scoring record) could happen, but we're looking at first getting a conference title and making a long postseason run," Lee said. "Those are two goals and he can certainly help with that aspect."

Collinsville has not won a conference championship since the 2012 season when it shared the title with Edwardsville. The last time the Kahoks won the conference outright was in 1996. Collinsville's last regional title was in 2015 while its last state tournament appearance came in 1992.

"After last year, we came up short, but we had a good team then and we have nearly everyone returning," Taylor said. "Not saying it's state title or bust, but it's something we're trying to do."

LADUE — It took three full quarters but Brandon Mitchell-Day managed to break through the lid on the basket.

De Smet gets just enough offense to sneak past O'Fallon

CREVE COEUR — After scrapping and clawing for the better part of four quarters, the O’Fallon boys basketball team took its first lead with a m…

Ray'Sean Taylor of Collinsville brings the ball up court against Alton at the Class 4A Collinsville Regional championship game in Collinsville, Illinois on Friday, March1, 2019. Paul Baillargeon / Special to STLhighschoolsports.com

Collinsville's Ray'Sean Taylor thanks the crowd for coming to his commitment ceremony on Tuesday, October 8, 2019 at Collinsville High School in Collinsville, Ill. Paul Halfacre, STLhighschoolsports.com

Collinsville's Ray'Sean Taylor (13) attempts to get around Belleville West's Will Shumpert (12) during a game on Tuesday, February 5, 2019 at Belleville West High School in Belleville, Ill. Paul Halfacre | STLhighschoolsports.com