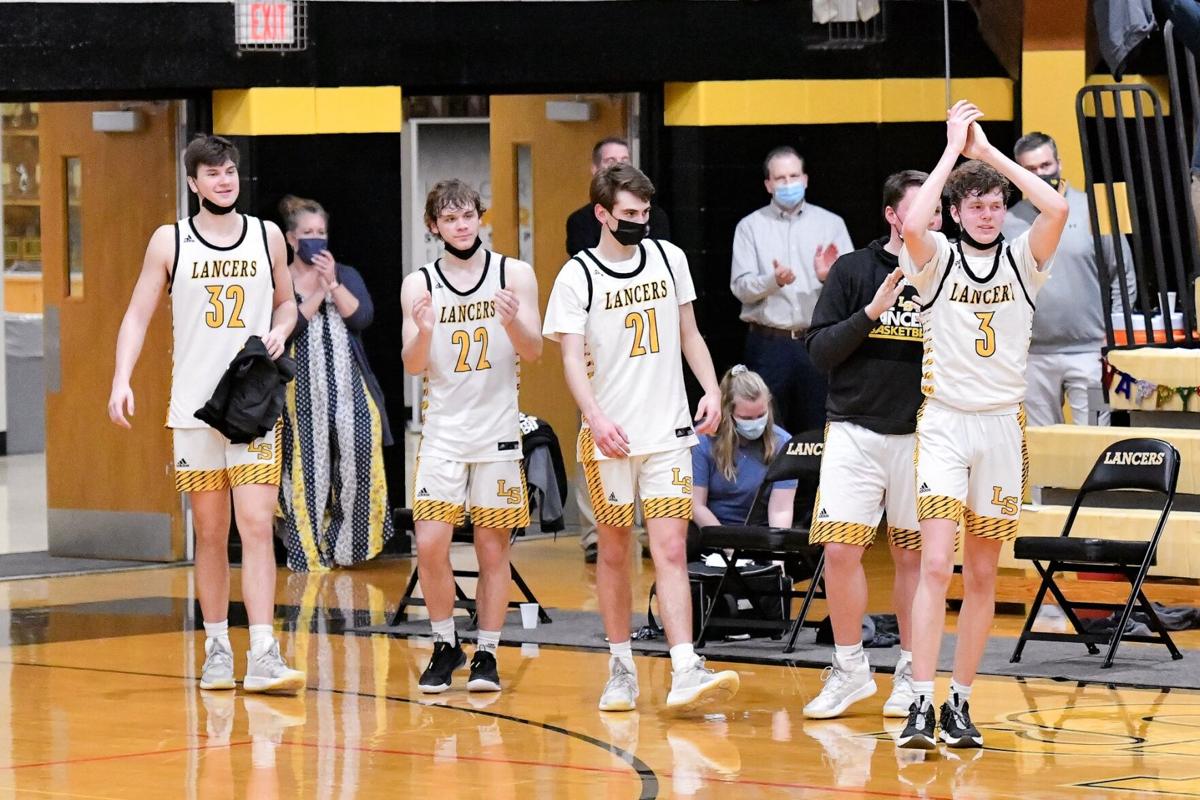 The Lutheran South starters come off the bench celebrating their victory in as the final buzzer sounds in the Class 5 sectional playoff game played on Tuesday March 9, 2021 at Lutheran South High School in St. Louis MO. Rick Ulreich, Special to STLhighschoolsports.com 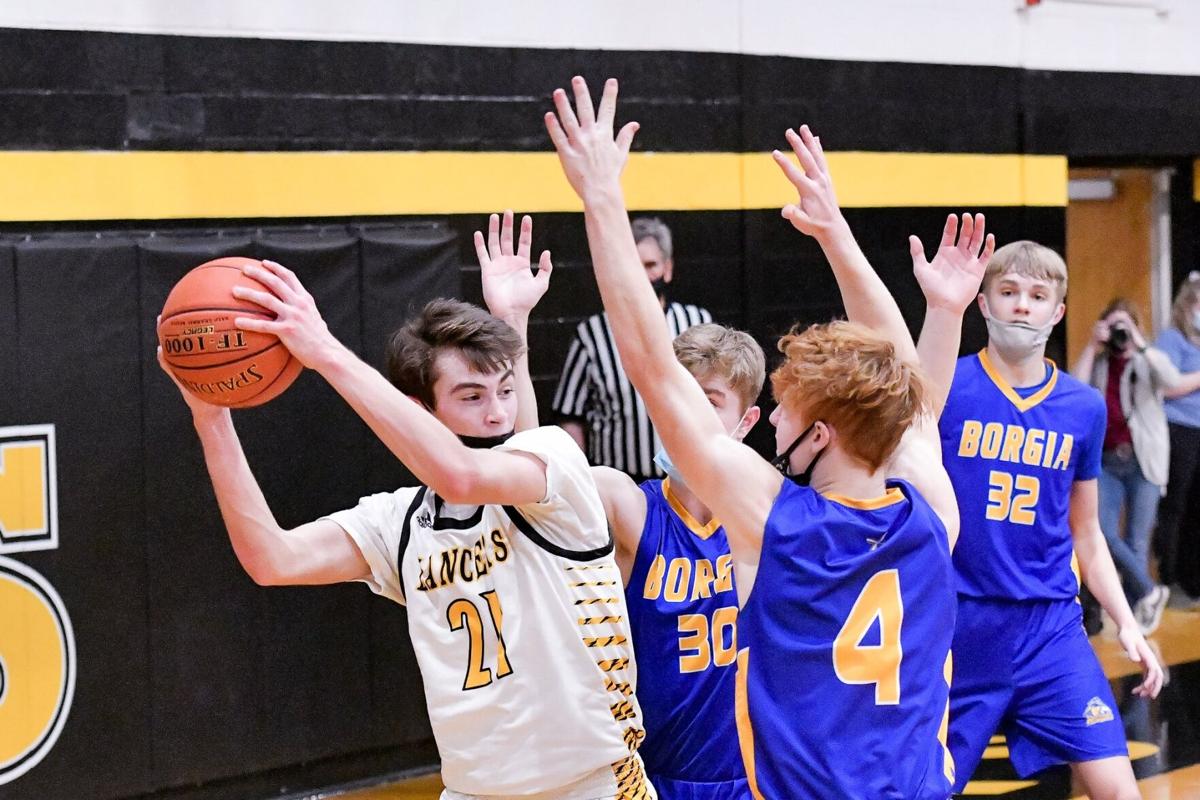 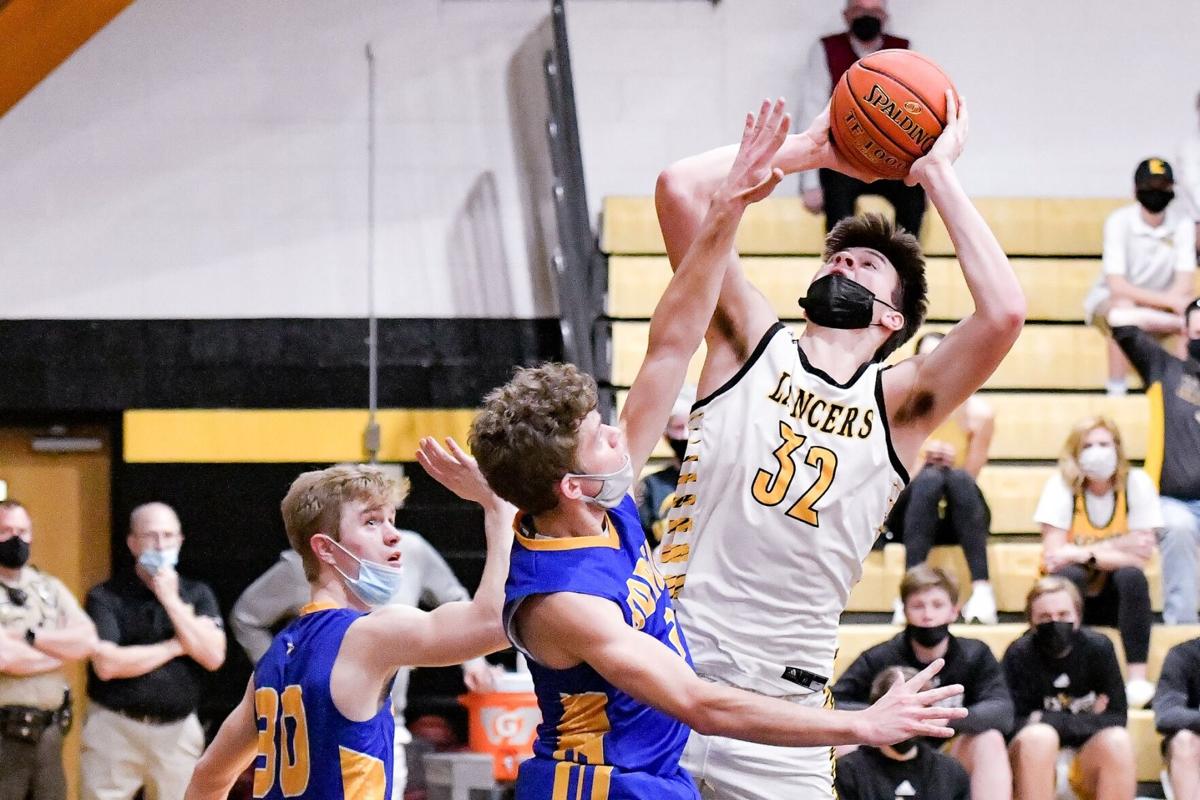 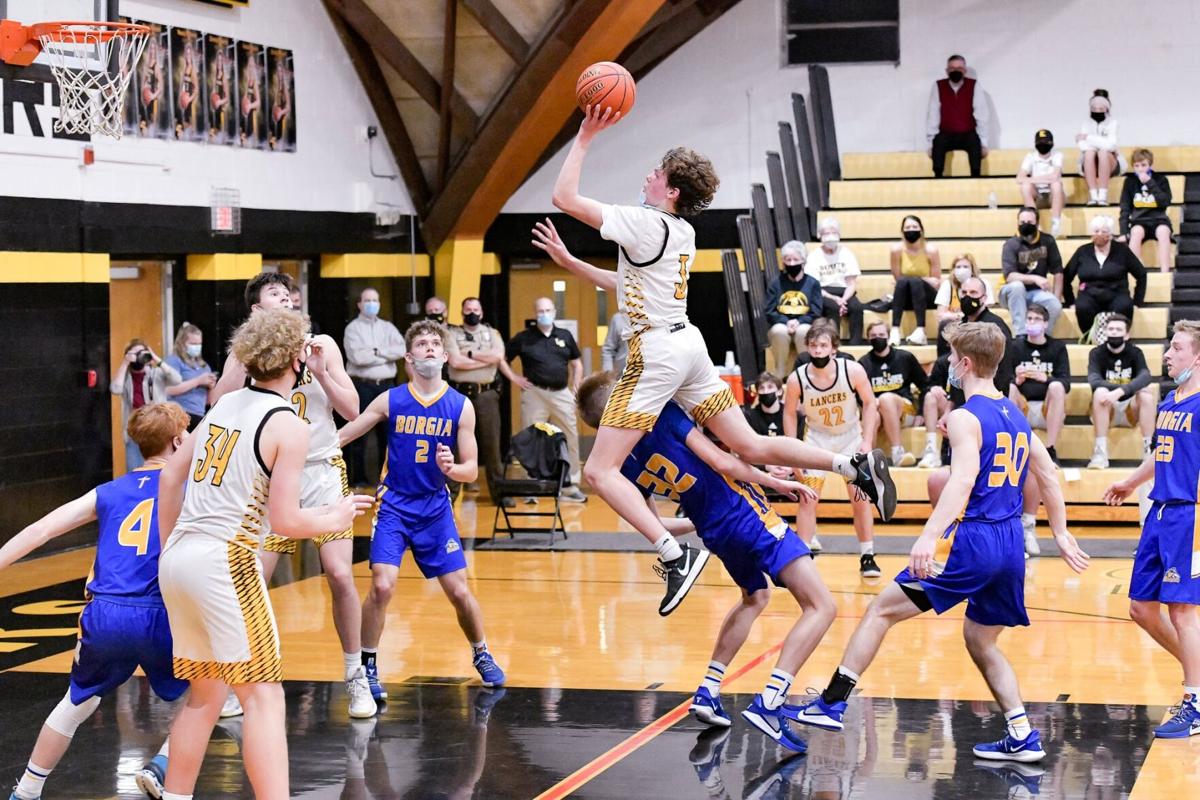 The Lutheran South boys basketball team was fresh off punching its ticket to the state semifinals for the first time in 47 years. When the Lancers boarded the bus to make the more than an hour-long trek from North County High in Bonne Terre to their Affton campus, coach Brian Lind collected their cell phones and dumped them in a bag. He wanted the players to spend this time with one another.

“Just to make sure they enjoyed it,” Lind said.

Lind let the Lancers keep one phone, which they attached to a portable speaker to pump out the tunes. When the boys discovered a microphone attached to the speaker, well that just meant it was time for karaoke.

Lind took his own turn with the microphone to belt out AC/DC’s “Back in Black.”

“It was a great bus ride home,” Lind said.

It was the best quarterfinal for Lutheran South since 1973, when it last advanced to the state semifinals. That year, coached by Herm Meyer, the Lancers went 30-1 and won the Class M championship with a 76-62 victory over Kansas City Manual.

When Lutheran South (16-11) takes the court again it will see Bolivar (15-12) in a Class 5 semifinal at 1 p.m. Thursday at JQH Arena on the campus of Missouri State University. It’s the fourth state semifinal appearance for the Liberators, who boast a large and in charge lineup that dwarfs most of its opponents.

“Coach Lind has a great game plan going in,” senior guard Austin Reis said. “Defense is going to be key. I’m confident in what we can do.”

The baseball team has had its moments and the football team recently had some high points, but at its core, Lutheran South consistently does its best work on the hardwood. Lind, who played at Lutheran South before graduating in 1990, said there’s just something different about how hoops affects the school community.

“Our school is more of a basketball school,” Lind said. “I had 76 text messages after the game at North County. It was a lot of guys who could have (made the semifinals). They identify with this program.”

It’s a program that is nothing if not consistent. Lind is just the third head coach in school history following the aforementioned Meyer and Don Harms, who Lind played for as a junior and senior.

Lind, who took over prior to the 2000-01 season, has every single scorebook in Lutheran South history in his office. Meyer passed his scorebooks to Harms then Harms passed them on to Lind.

“It’s something special about our school,” Lind said.

The semifinal drought was long but there was a 16-year gap between quarterfinal appearances. Dexter beat Lutheran South in the Class 4 quarters in 2004. The seniors on this year’s roster were barely out of diapers back then. They had no idea what they were walking into Friday night on their ride down to North County.

When they arrived an hour before game time they were greeted by a packed house that was not shy about telling the Lancers just how they felt about them.

“They booed us when we walked in,” Reis said. “That was a cool experience for me.”

It was also the first time Lutheran South played in front of a crowd like that this season. The St. Louis County Department of Public Health instituted spectator restrictions this winter in an effort to combat COVID-19. That was not the case at North County, where the Missouri State High School Activities Association listed the paid attendance for the game at 1,186.

It was loud. It was electric. It may have actually played into Lutheran South’s hands. The Lancers opened up a 34-20 halftime lead.

“I really enjoyed playing in front of fans,” Prange said. “Their student section and fans were relentless. The energy in the gym served us well.”

It helped that the Lancers got another strong performance from their three-headed monster of Reis, Prange and Jack Lawson. The senior trio combined for 51 of the team’s 61 points.

A 6-foot-7 and 215-pound swingman, Lawson has been Lutheran South’s best all-around player. A three-year varsity stalwart, he’s averaged 19.8 points, 7.9 rebounds and blocked a team-high 34 shots. Lawson has really stepped up on the glass at the end of the season as he’s hauled in 10 or more rebounds in four of the last five games. After joining the varsity as primarily a shooter his sophomore year, Lawson has been clutch as a low post presence.

“I’m in the paint most of the game now,” he said. “It’s always fun stepping out and shooting a three. It’s nice blocking people.”

Lawson will continue his basketball career at Colby College in Waterville, Maine.

The 6-foot-3 Prange is the Lancers' top threat from behind the arc. He’s connected on 38 of his 114 3-pointers. He’s also been lethal at the free-throw line where he’s hit 78 of his 96 attempts. Prange averages just more than 15 points per game and he said the biggest growth in his game has come from putting the ball on floor and driving.

“I’ve always been able to shoot it,” he said. “The thing that has evolved has been getting to the basket.”

Reis, who’s 6-foot-3, averages 11.8 points, 5.4 rebounds and a team-best 4.6 assists per game. A goalkeeper for Lutheran South’s boys soccer team, he’ll be between the pipes at the University of Missouri–St. Louis in the fall. He said being able to see the entire pitch as a keeper has helped him on the basketball court.

“Goalie vision you see everything,” he said. “Having that on the court helps me find open guys.”

Those leaders were outstanding against North County. They also were exhausted when the night was through. Lind said the Lancers went only about six players deep and the high intensity of the game just sapped their energy.

So much so that Prange worried about falling off a ladder afterwards.

As Lutheran South celebrated on the court after the game, they were given a surprise that every one of them will cherish for the rest of their lives. North County athletics director Chad Mills brought over a ladder, some scissors and offered the Lancers the chance to cut down the nets to commemorate their victory.

“North County was awesome,” Lind said. “It’s a good reminder that there’s a lot of good people in high school and youth sports.”

One by one the Lancers ascended the ladder and snipped a piece of twine to call their own. After seeing college teams partake in the ritual net cutting on television, it was a thrill the Lancers never imagined they’d experience.

“I’ll always have something to remember that moment,” Reis said.

Prange, whose wobbly legs stayed true as he took his piece of net, rocked with his teammates all the way back to Affton with a smile on his face and a song in his heart — or at least blaring in his ears. It wasn’t until he tried to disembark that his legs decided they'd had enough action for one night.

“I got the worst cramp ever when I stood up,” he said with a laugh.

The worst cramp ever after the best bus ride ever? That’s a trade Prange is willing to make every time.

Grant Agbo learned how to play basketball by watching tape.

The Lutheran South starters come off the bench celebrating their victory in as the final buzzer sounds in the Class 5 sectional playoff game played on Tuesday March 9, 2021 at Lutheran South High School in St. Louis MO. Rick Ulreich, Special to STLhighschoolsports.com