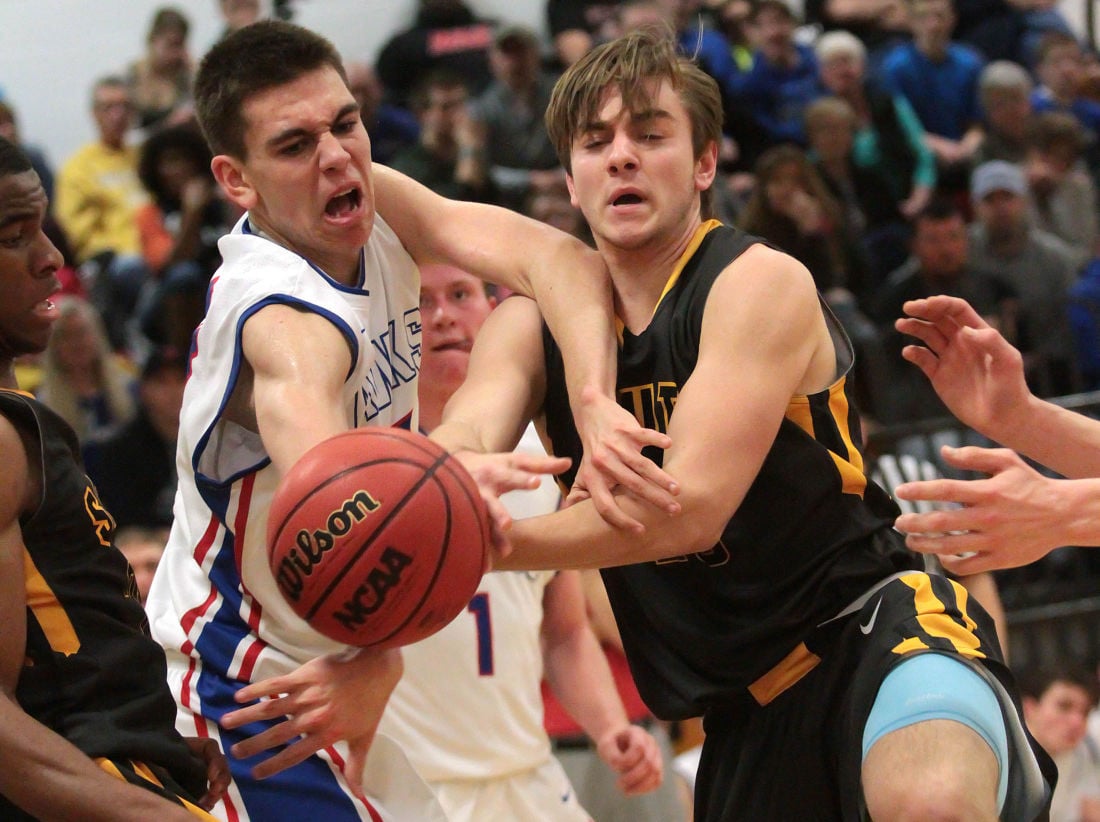 Gavin Pinkley (left) of Hillsboro and Landon Waller of Lutheran South battle for a rebound during the Class 4 District 3 championship on Thursday, March 3, 2016 at Festus High School. Paul Kopsky, STLhighschoolsports.com 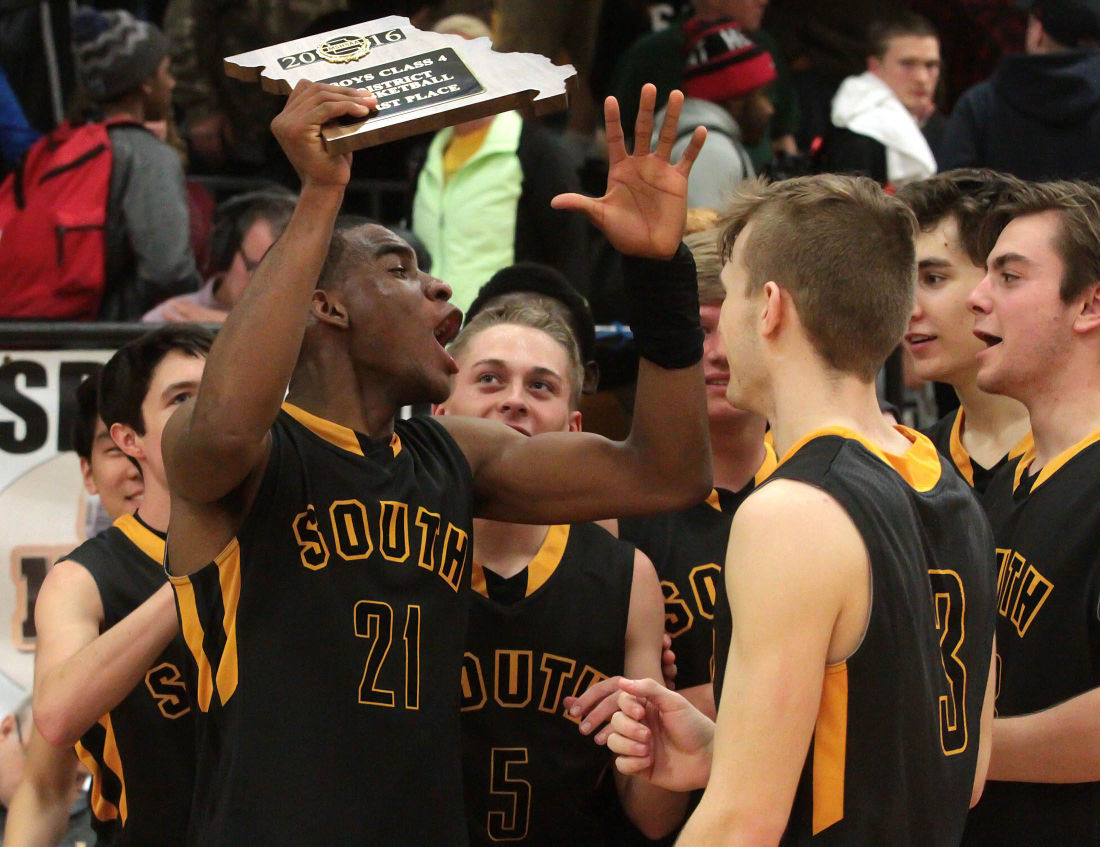 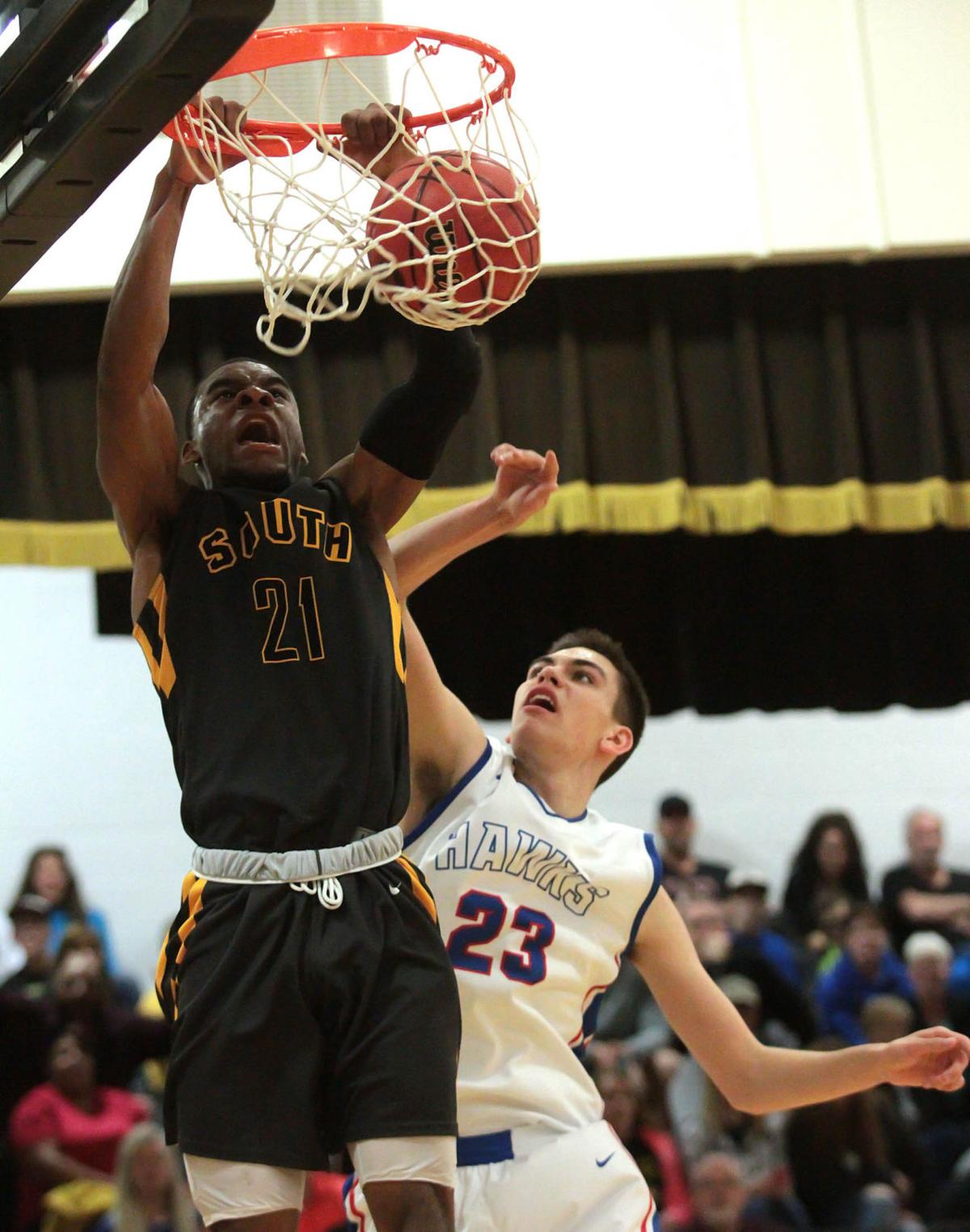 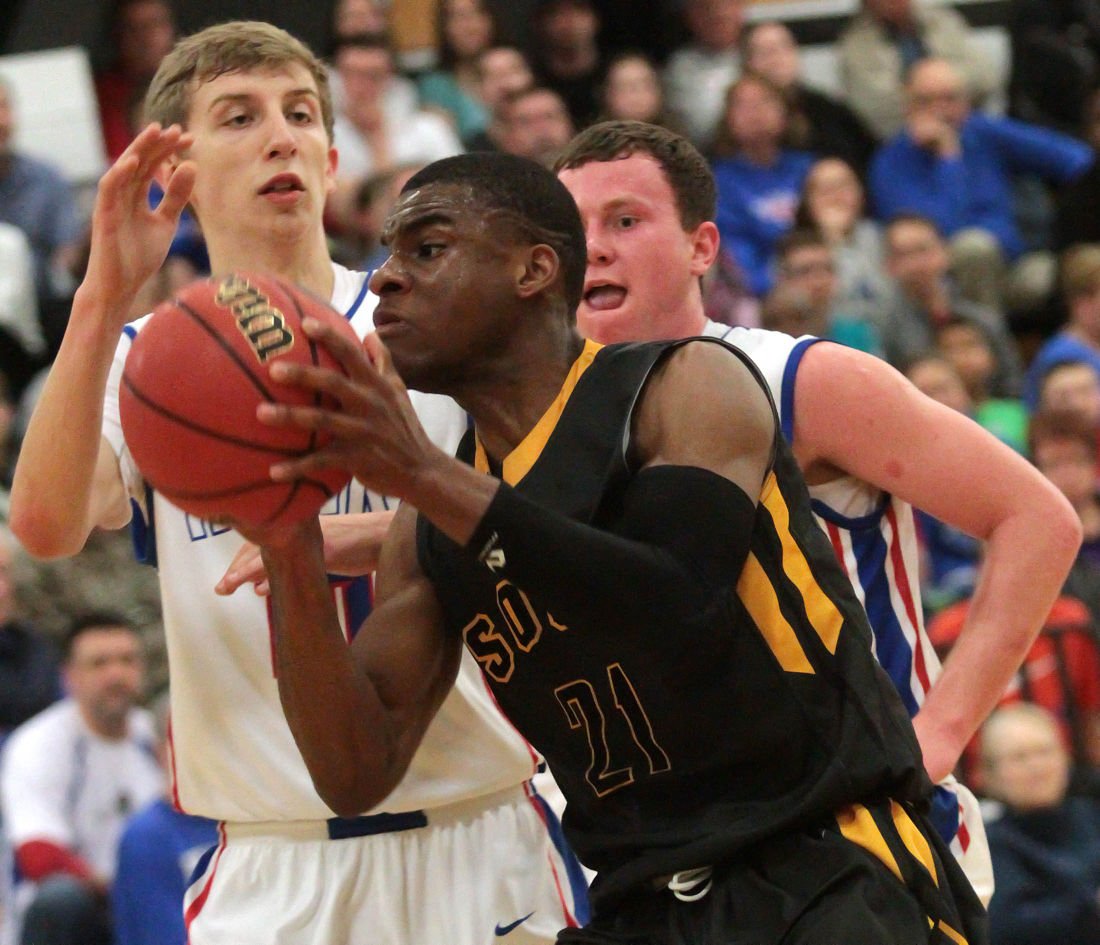 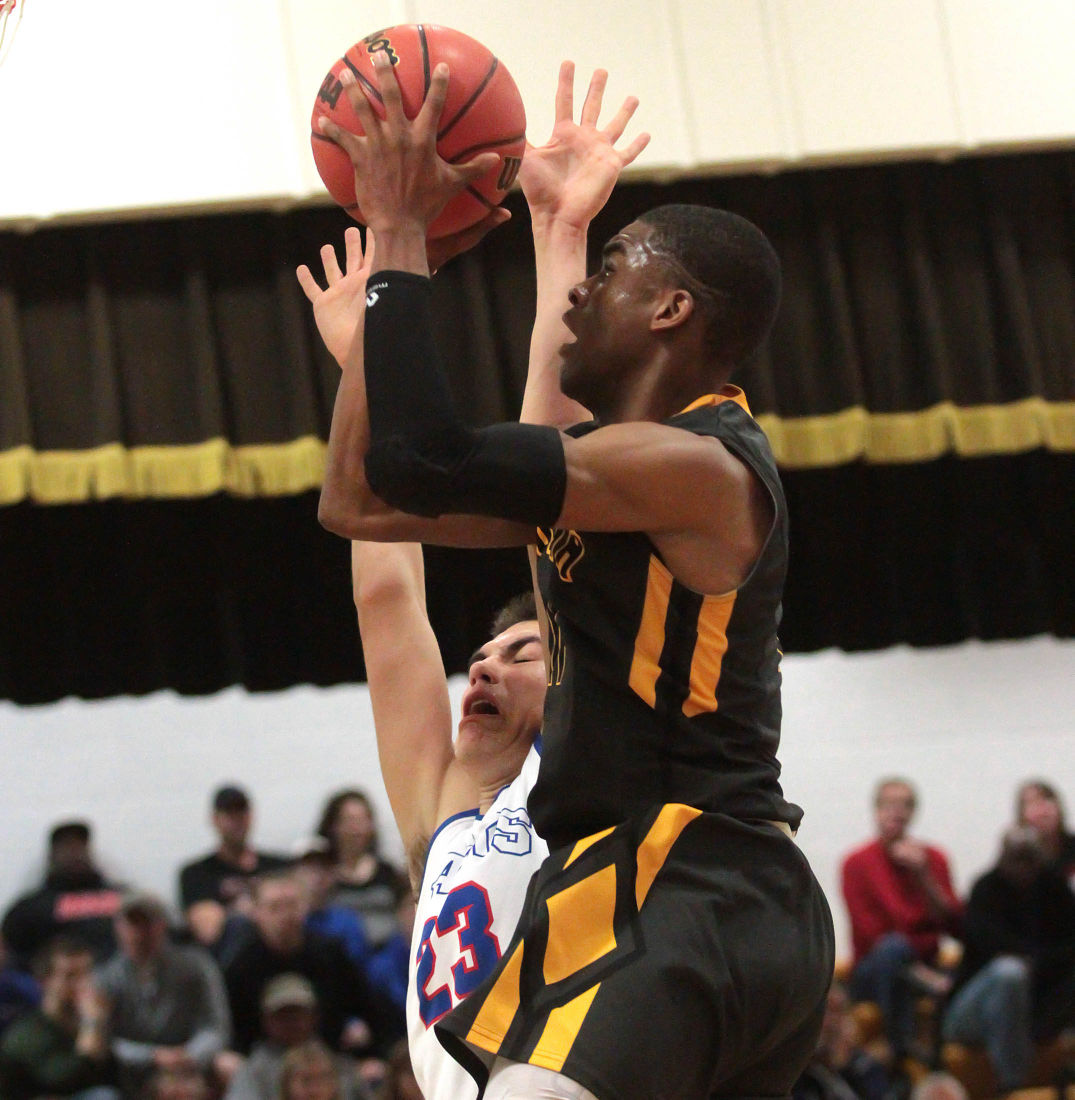 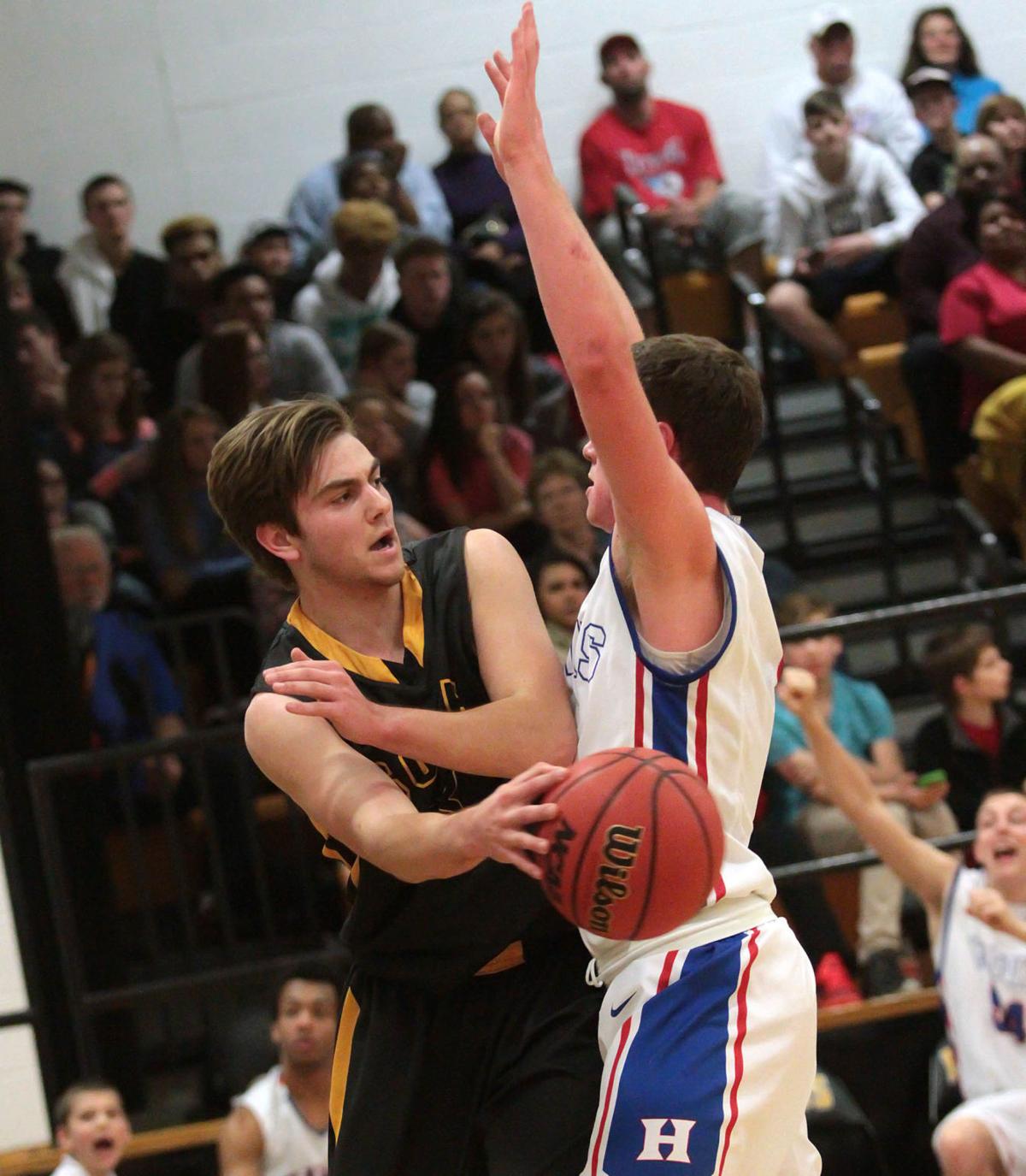 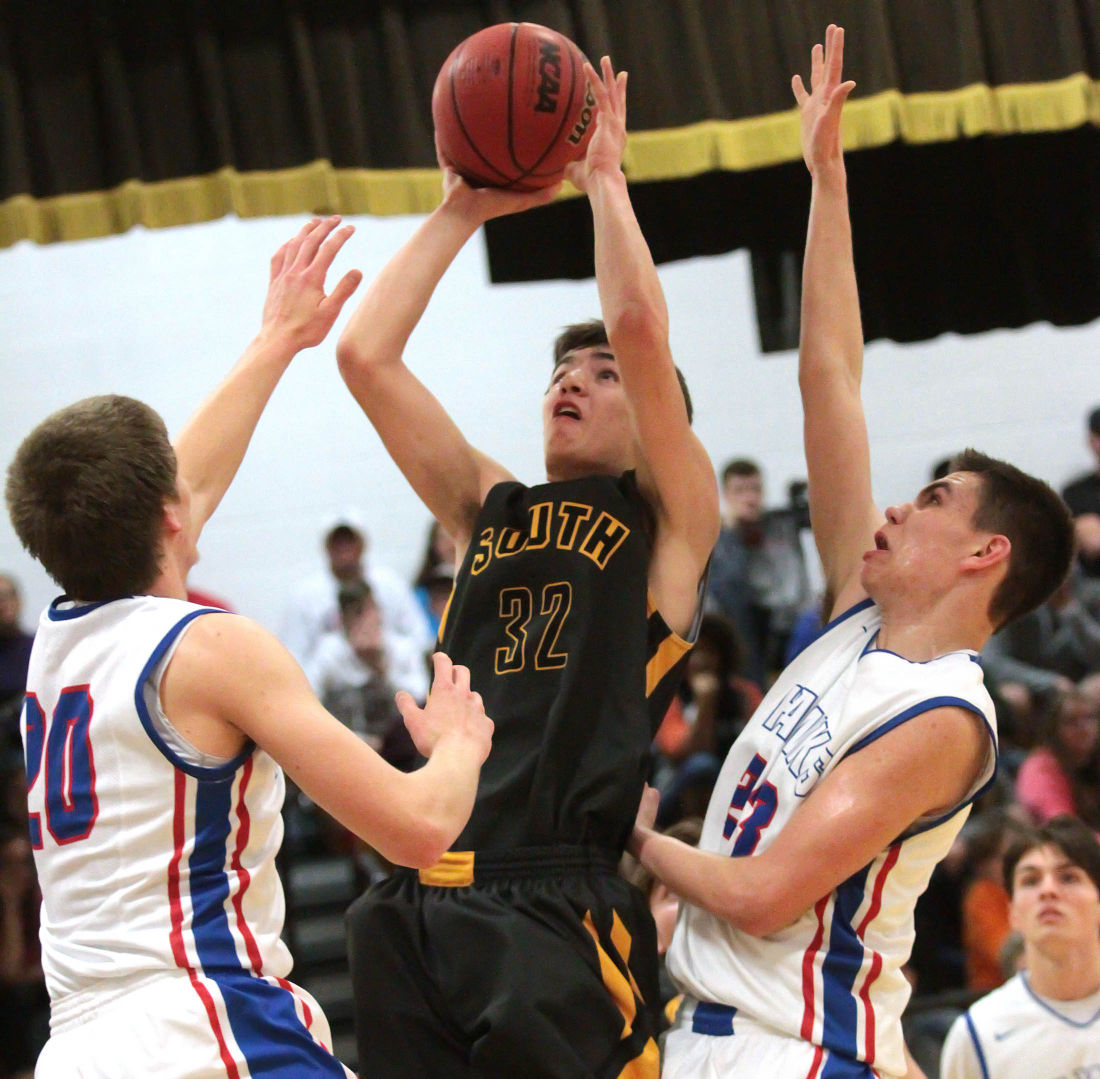 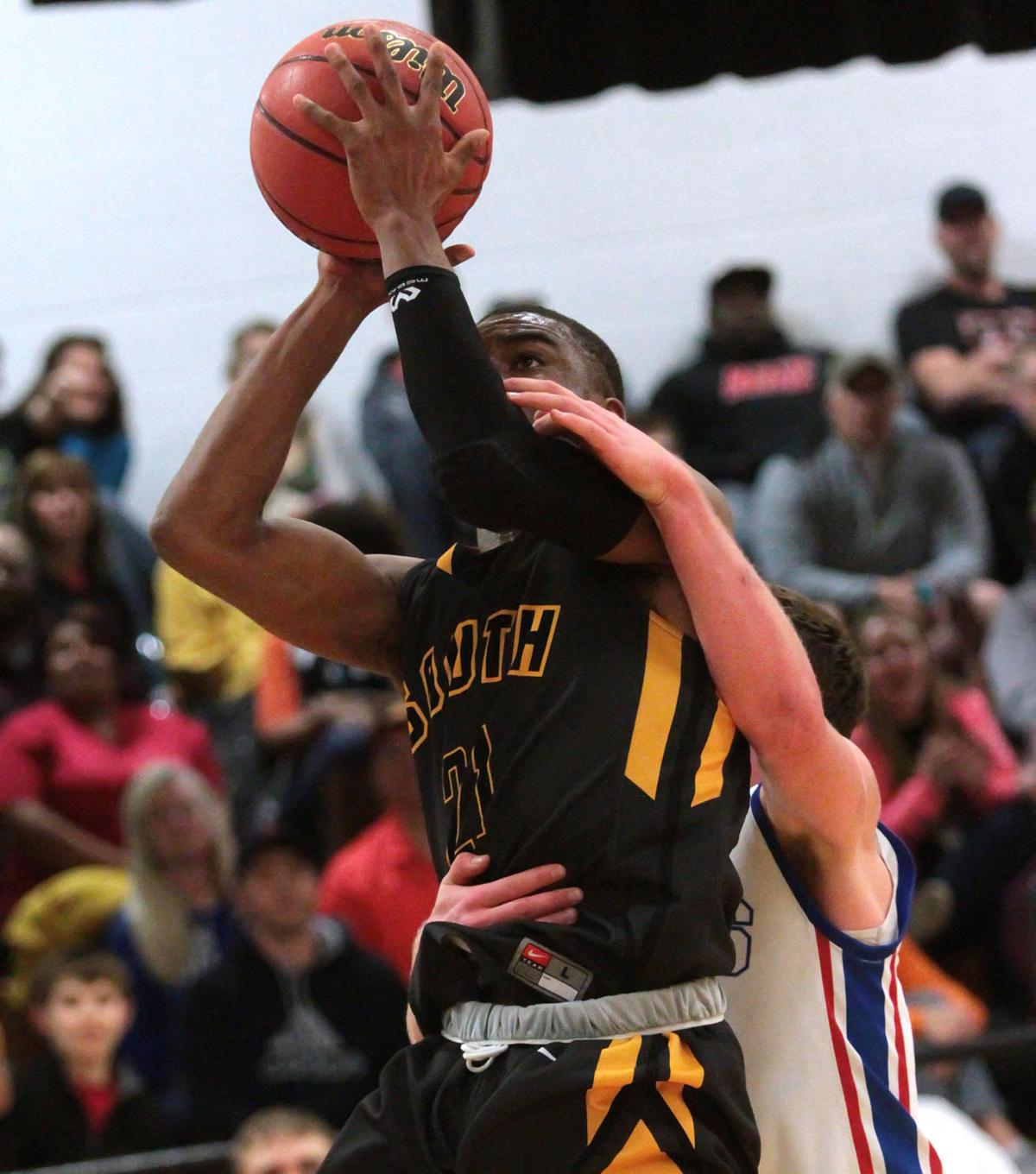 Lezoghia Member-Meneh (left) of Lutheran South is grabbed as he shoots by Sam Mock of Hillsboro during the Class 4 District 3 championship on Thursday, March 3, 2016 at Festus High School. Paul Kopsky, STLhighschoolsports.com 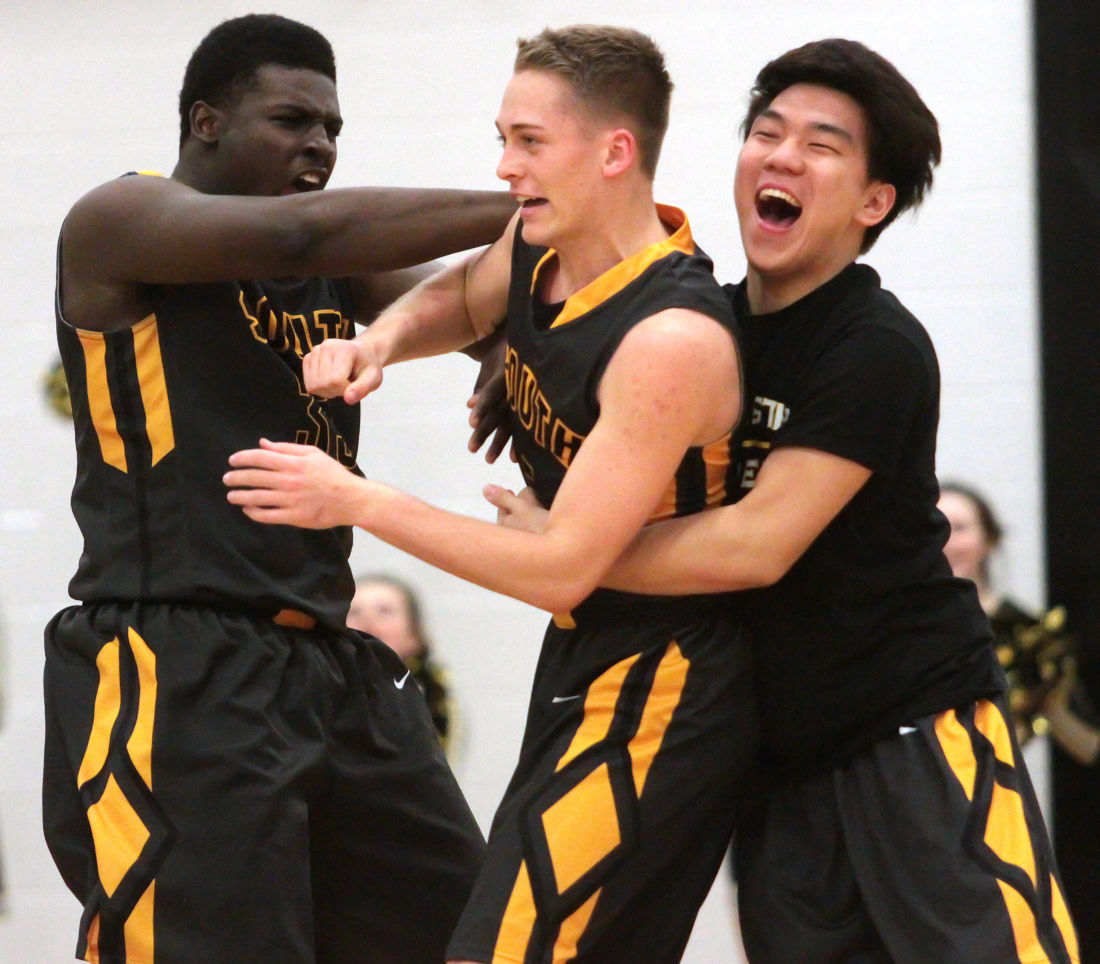 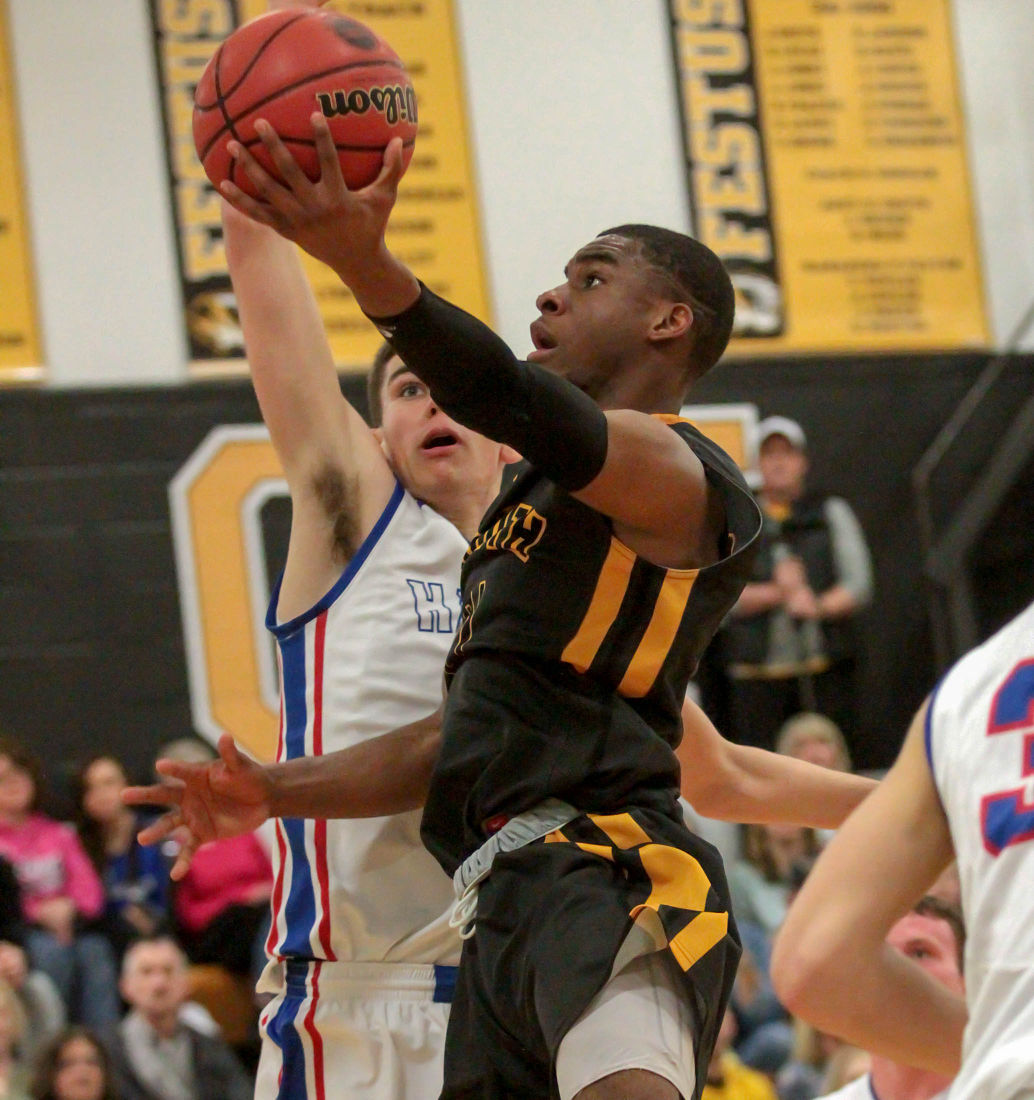 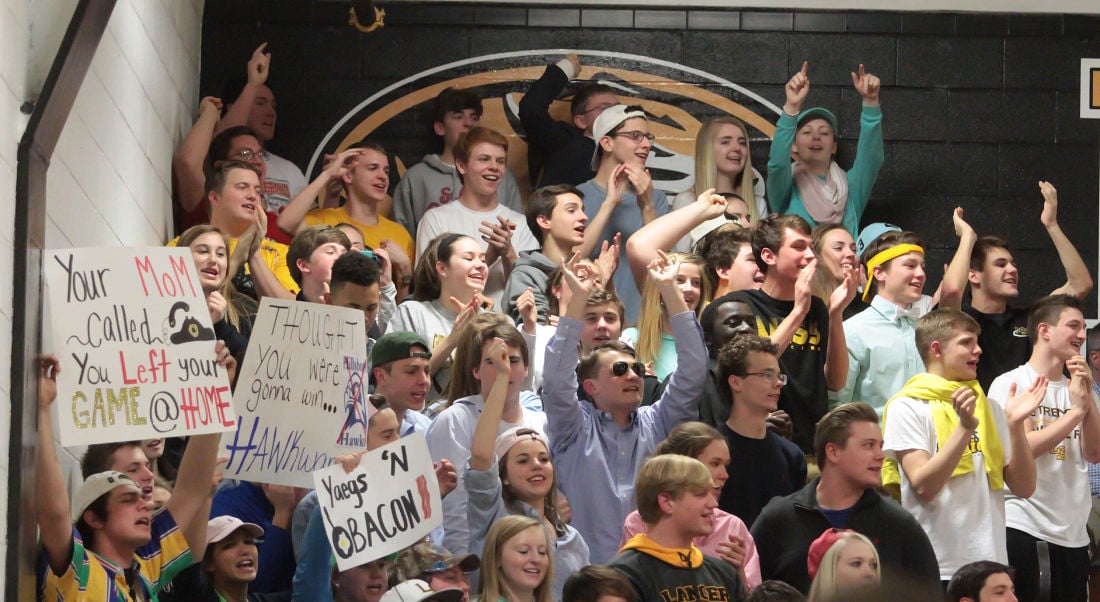 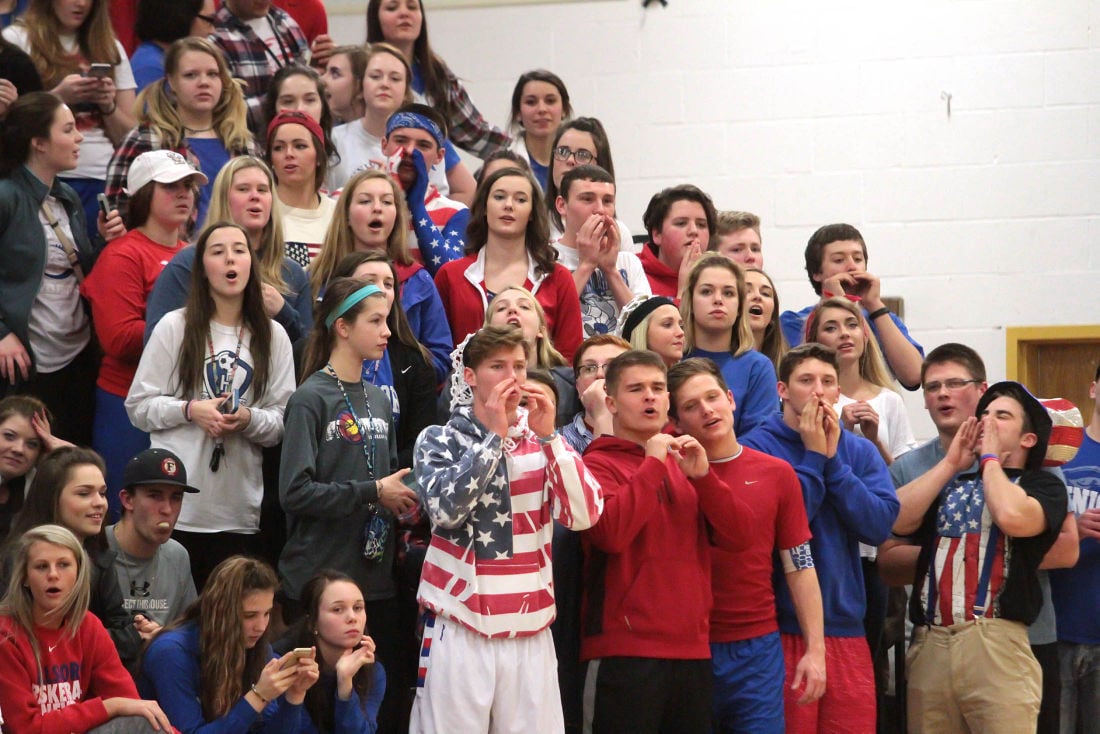 A junior shooting guard for the Lutheran South boys basketball team, Daube had one of those nights where nothing he threw up went in. Good looks or great looks, the ball wouldn't go in the basket.

Thursday was a different story.

Daube knocked down five 3-pointers including a momentum booster at the end of the first half to help No. 2 seed Lutheran South power past top seed Hillsboro 87-75 in the Class 4 District 3 championship game at Festus High.

Lutheran South (21-6) has won back-to-back district titles, four games in a row and six of its last seven. The Lancers advanced to play either Parkway West or University City in a sectional at 7:45 p.m. Wednesday at Kirkwood.

As the Lancers celebrated another district title, Daube was just happy he could help his team when it mattered most.

“I practiced hard and got some shots up (on Wednesday),” he said. “I came into the game with a good attitude and a good mindset.”

Lutheran South went to work from the opening tip. Behind senior guard Lezoghia Member-Meneh and junior forward John Yaeger, the Lancers attacked Hillsboro at the basket and led 20-12 after the first quarter.

Member-Meneh powered home a spectacular alley-oop for the first points of the second quarter that nearly brought the house down.

“It was a game-changer. It was an adrenaline rush,” Member-Meneh said. “Everyone was in the game.”

Hillsboro (21-7) shook it off and battled back. The Hawks put together an 11-0 run that cut the Lancers' lead to 28-25. They closed to within 33-32 with 1 minute and 35 seconds before halftime. But Lutheran South came up with a steal and Member-Meneh was headed in for another dunk when Hillsboro senior guard Sam Mock wrapped him up at the waist and was called for an intentional foul. Member-Meneh hit one free throw and the ball went back to the Lancers.

Daube pump faked, stepped back and buried a 3-pointer at the buzzer to send the Lancers and their fans into a frenzy. Lutheran South took a 41-32 lead into the locker room.

“They were so excited after that one. I had to remind them that wasn't the game winner. We had to get refocused,” Lutheran South coach Brian Lind said. “Anytime you can hit a shot like that it can create a lot of momentum.”

The third quarter opened the same way the second quarter ended as Lutheran South continued to score. The Lancers pushed the lead to 46-32 and never looked back.

“We're down nine at the start of the half and they got the first couple buckets and it felt like we were down 14 the whole time,” Hillsboro coach Dan Johnson said. “That series, that last two minutes of the second quarter was probably the difference.”

Member-Meneh was phenomenal as he finished with 29 points, seven rebounds two steals and a block. Yaeger scored 24 points and grabbed six rebounds. Hillsboro hoped to limit his damage around the basket, but the multi-talented Yaeger found a way to do damage anyway.

“We were talking about not letting him get any post touches," Johnson said. "And while we did well there he stepped out and he's got really good guard skills. He gave us fits getting to the rim. That kid's ability to step out and put it on the floor was a big difference.”

Lutheran South's senior class has now won three district championships in its four years. The only hiccup was a district title game loss to Affton its sophomore season. Even if this seems like old hat, the seniors appreciated what it meant for the school and the program.

Gavin Pinkley (left) of Hillsboro and Landon Waller of Lutheran South battle for a rebound during the Class 4 District 3 championship on Thursday, March 3, 2016 at Festus High School. Paul Kopsky, STLhighschoolsports.com

Lezoghia Member-Meneh (left) of Lutheran South is grabbed as he shoots by Sam Mock of Hillsboro during the Class 4 District 3 championship on Thursday, March 3, 2016 at Festus High School. Paul Kopsky, STLhighschoolsports.com