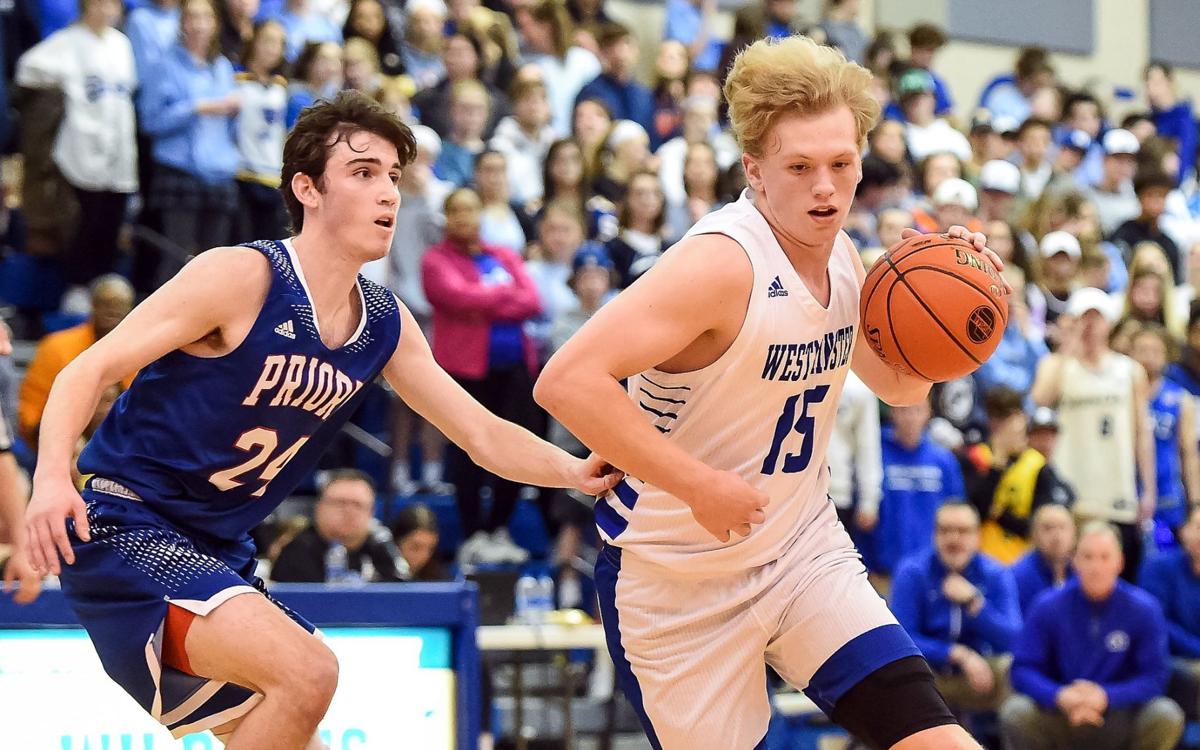 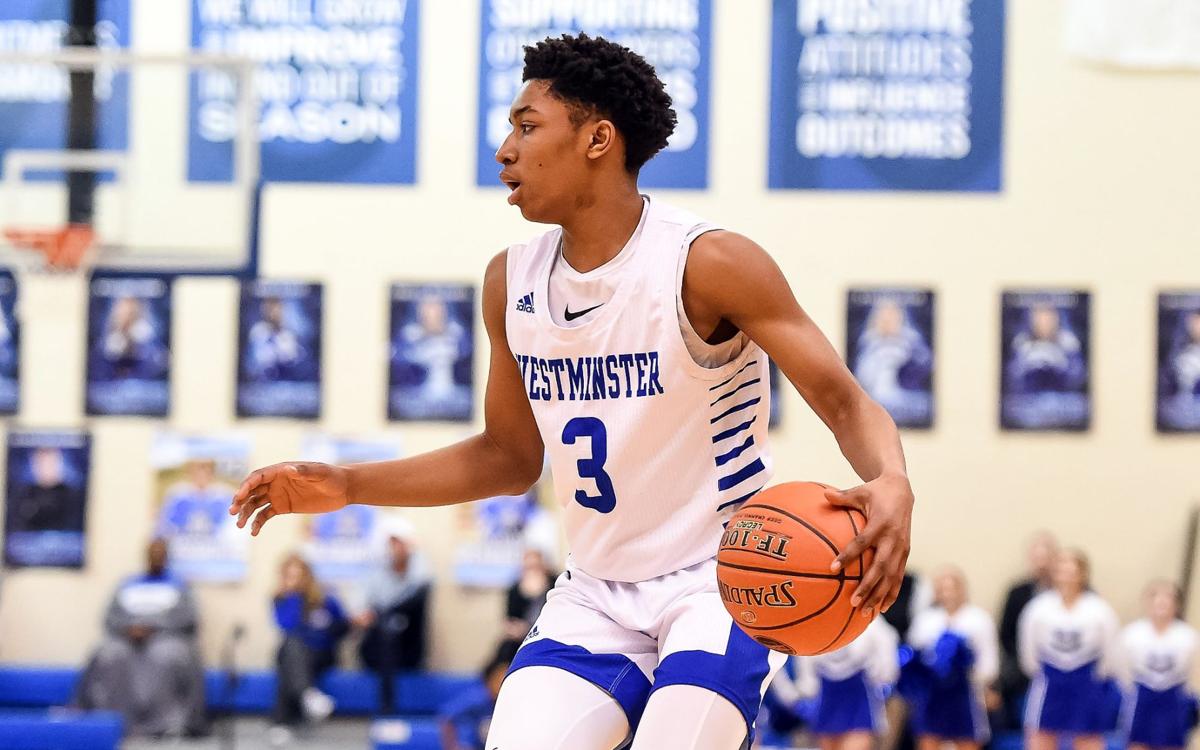 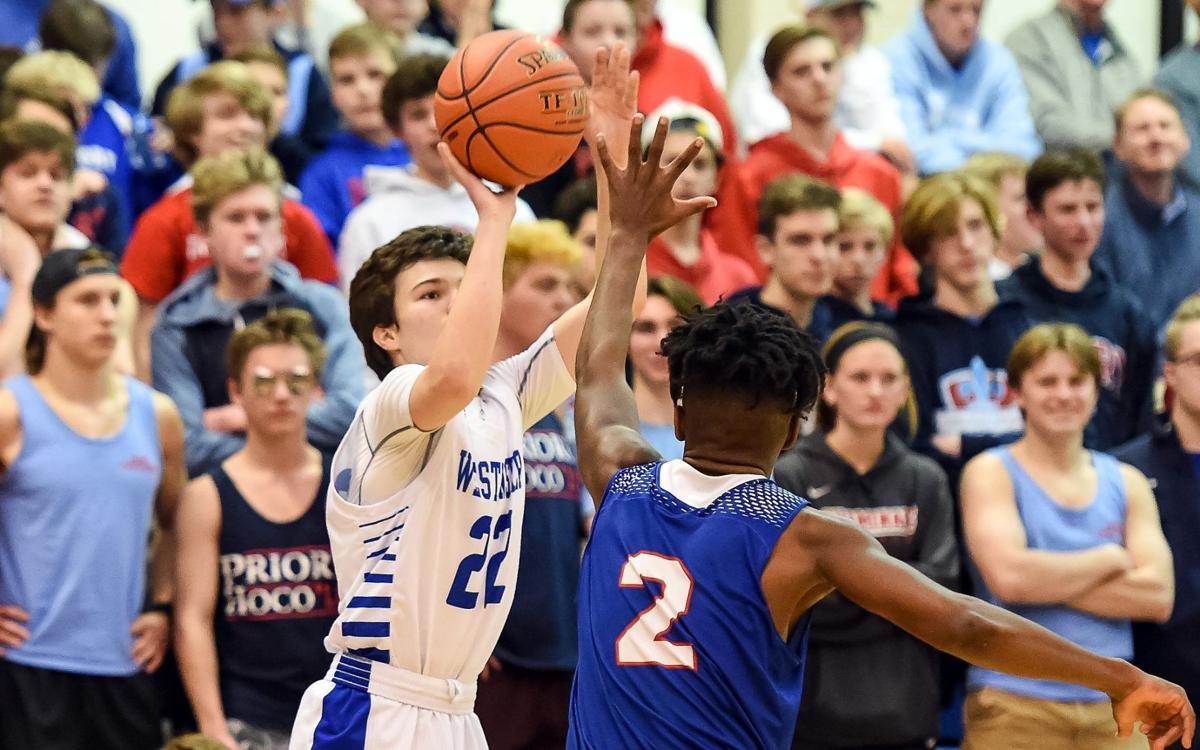 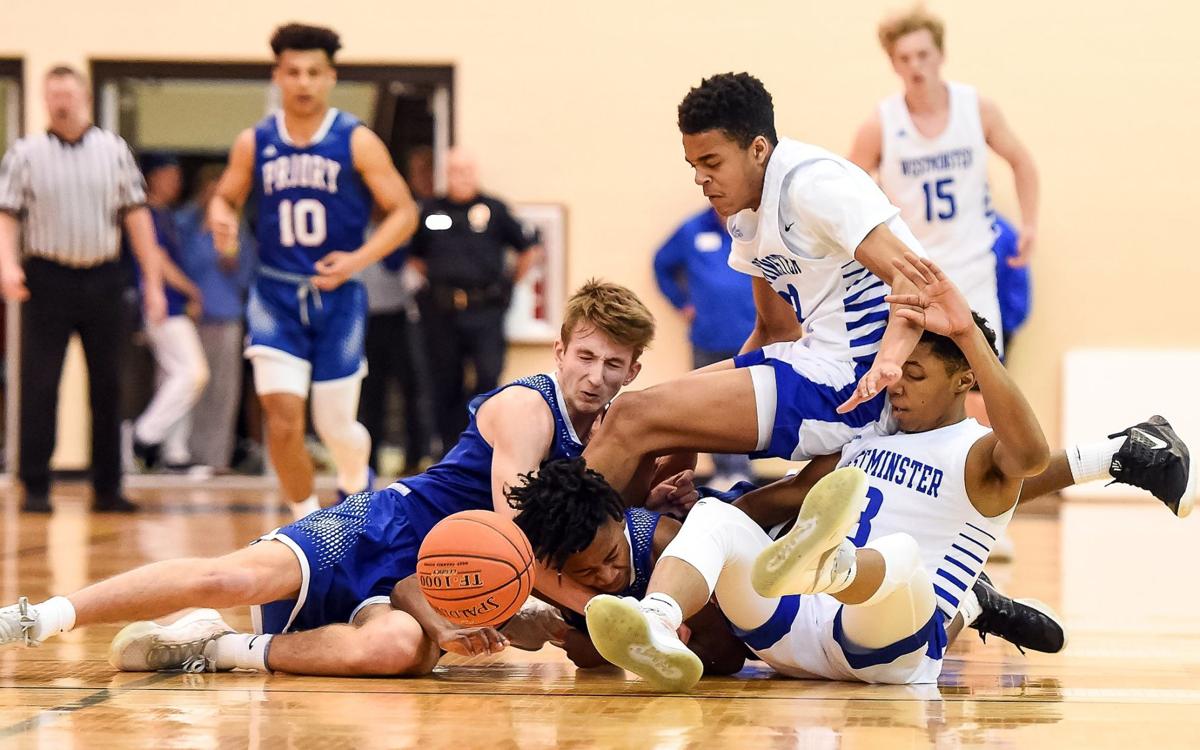 A mound of players battle for a loose ball at mid-court during the Class 4 District 4 final boys basketball game on Thursday, March 5, 2020, at Westminster Christian Academy High School in Town and Country, Mo. Randy Kemp | Special to STLhighschoolsports.com 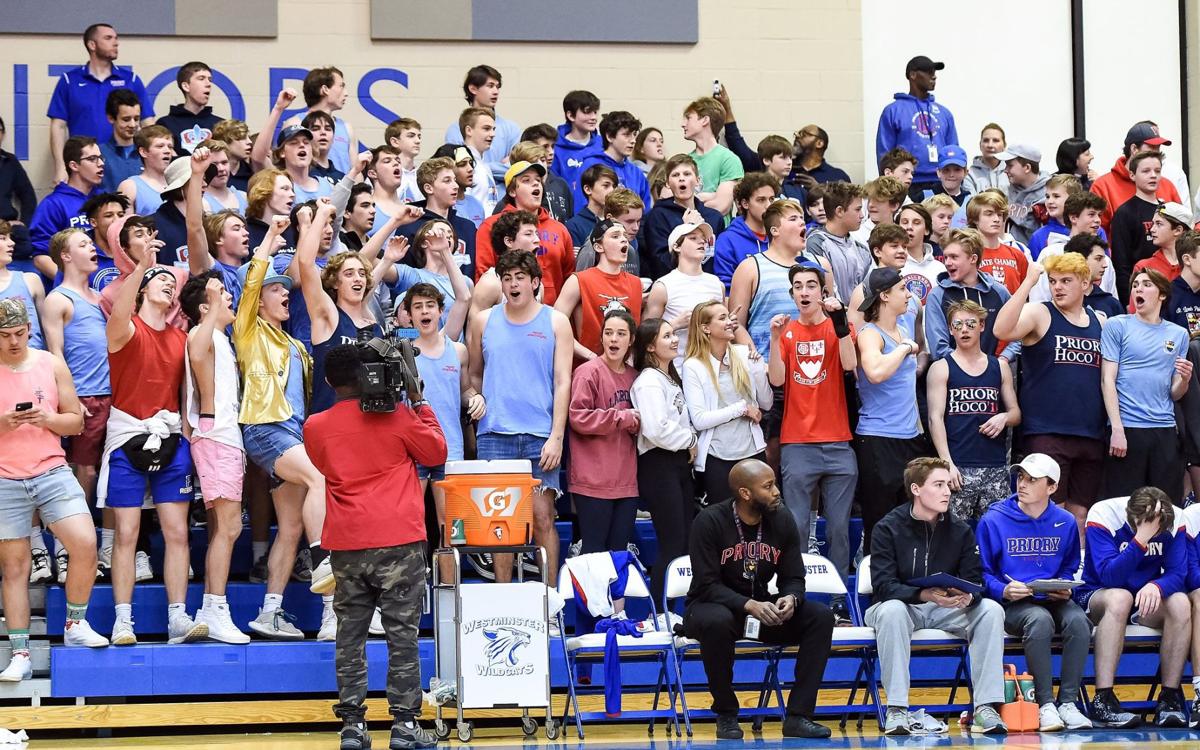 Dale Ribble followed, soaked from head to toe. The Westminster coach, Ribble took the brunt of the Wildcats water party.

And with good reason.

Westminster led wire-to-wire as it beat Metro League rival Priory 58-46 in the Class 4 District 4 championship game at Westminster. It’s the fifth district championship for the Wildcats and their first since 2015.

The No. 3 small school in the STLhighschoolsports.com rankings, Westminster (23-4) advanced to face St. Mary’s (11-16) in a sectional at 7:45 p.m. Tuesday at Northwest-Cedar Hill.

It will be Ribble’s first foray into the state playoffs. His reward is a district championship plaque and an impromptu bath.

“This is new to me,” Ribble said. “We’re excited and our players are excited. We’re thankful for all the people that were here tonight supporting us. I think our community is excited about it, too.”

In front of a raucous home crowd, Westminster set the tone in the first quarter on the defensive end. The No. 7 small school, Priory (18-8) needed more than five minutes to score its first bucket and it was the only bucket the Rebels managed as the Wildcats took a 9-2 lead into the first.

Things tightened up in the second as Priory went into the paint to junior post Harrison Wilmsen. The 6-foot-8 Wilmsen scored on the Rebels first possession and cut the Wildcats lead to 11-8 on a nice turn around shot in the lane.

Westminster put together what could have been a crippling 10-0 run over the next three minutes that was highlighted by sophomore guard Case Lawrence burying a contested 3-pointer. He finished with nine points. Sophomore guard EJ Williams was key during that run, too. He finished with 11 points, five rebounds and a blocked shot.

Priory scored the last six points of the period to cut the deficit to 23-16 at halftime.

“We stayed with it and cut that thing by the half,” Priory coach Bobby McCormack said. “We battled back into it and felt good about what we accomplished in the second quarter.”

Priory employed a 2-3 zone in the first half, but switched to a man-to-man in the second half and Westminster’s Brennan Orf took notice.

A 6-foot-3 senior forward, Orf didn’t score a point in the first half, but controlled things for Westminster. He was the point man for the Wildcats as they ran through their offensive sets. Once he got a taste of the Rebels new defense, he went to work.

“The first half they were running a 2-3 zone so that’s not what’s best for me scoring the ball,” Orf said. “I was trying to get most people involved and get the three-ball down. In the second half, they went to man so I had to drive the ball more and dish when it was open.”

Orf scored 16 points, hauled in 12 rebounds and handed out three assists. He battled Wilmsen on both ends and won more often than not. Wilmsen finished with 11 points and five rebounds.

Priory trailed by six points early in the third quarter, but spent much of the night behind by double digits. Westminster led 35-21 at the end of the third.

Priory had one more run left in it. Senior guard Charlie Ferrick scored a layup and then the Rebels' pressure defense forced a quick turnover. Ferrick grabbed the loose ball and scored a layup-and-one that made it 38-30 with 6 minutes and 29 seconds to play. Ferrick finished with 22 points, three rebounds and five steals.

The Rebels appeared to finally be getting some traction when things fell apart. Junior guard Myles Kee spent much of the third quarter in foul trouble. He returned to the court for the fourth and was whistled for his fifth foul while attempting to strip the Westminster ball handler. After the whistle blew, he reacted to the call demonstrably by storming toward his bench and pulled his jersey up. He was hit with a technical foul. Westminster was awarded two free throws for the common foul, two free throws for the technical foul and then possession of the ball.

Freshman guard Kobi Williams knocked down both of his free throws. Lawrence hit one of two and Orf scored a layup on the ensuing possession for a 5-0 run and a 43-30 lead.

“Defensively (Kee) sets the tone,” McCormack said. “We missed so many easy shots that it really comes back to haunt you. Against a good team like Westminster, it’s like pushing a ball uphill. It’s a tough thing to do.”

McCormack wasn’t happy with the result, but loved that his team gave itself a chance at doing something that hasn’t been done at Priory in a long time.

“As a coaching staff it means so much to us when it hurts this badly,” McCormack said. “We know the expectations are so high. That’s the plateau they’ve put Priory basketball on.”

The postseason honors continue to roll in for Caleb Love.

A mound of players battle for a loose ball at mid-court during the Class 4 District 4 final boys basketball game on Thursday, March 5, 2020, at Westminster Christian Academy High School in Town and Country, Mo. Randy Kemp | Special to STLhighschoolsports.com