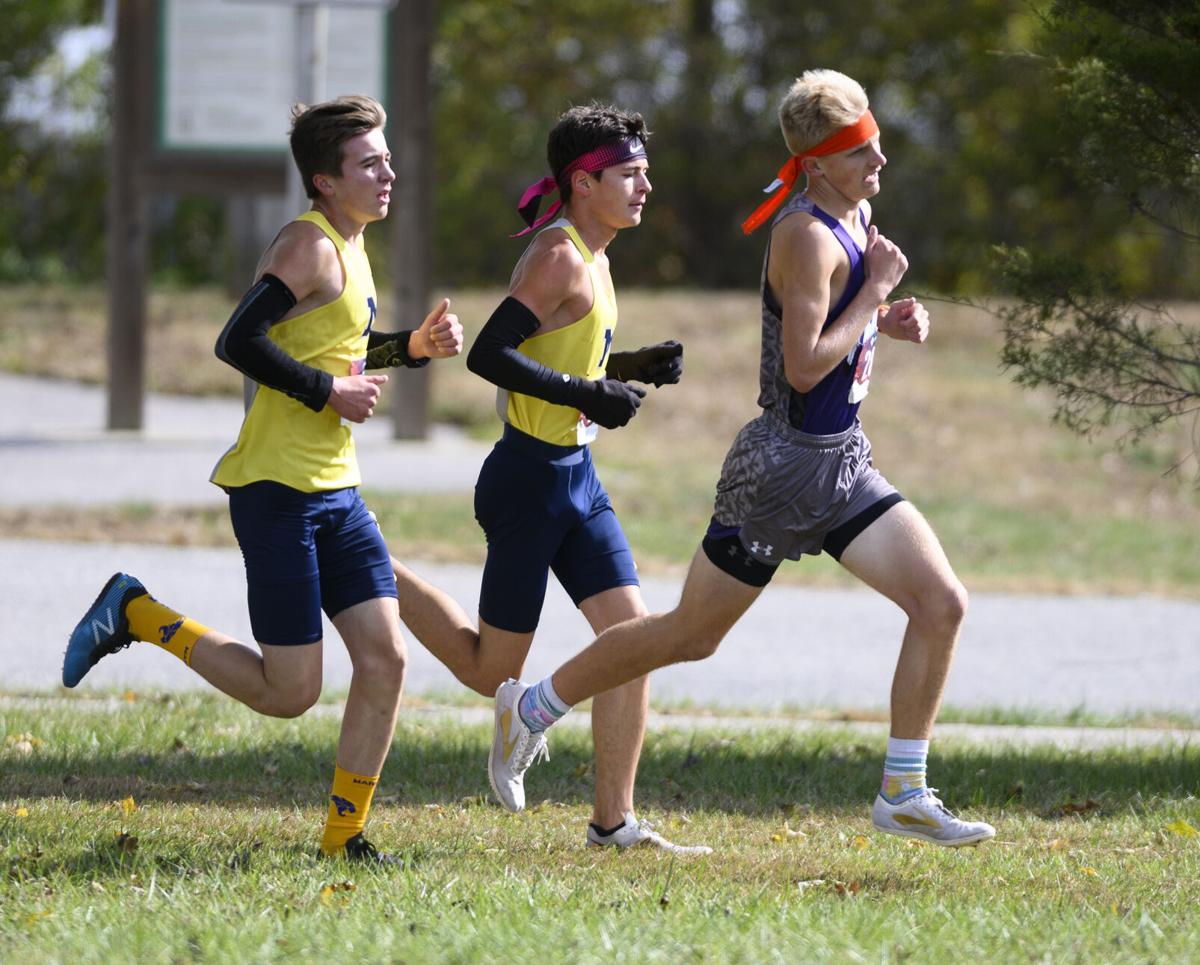 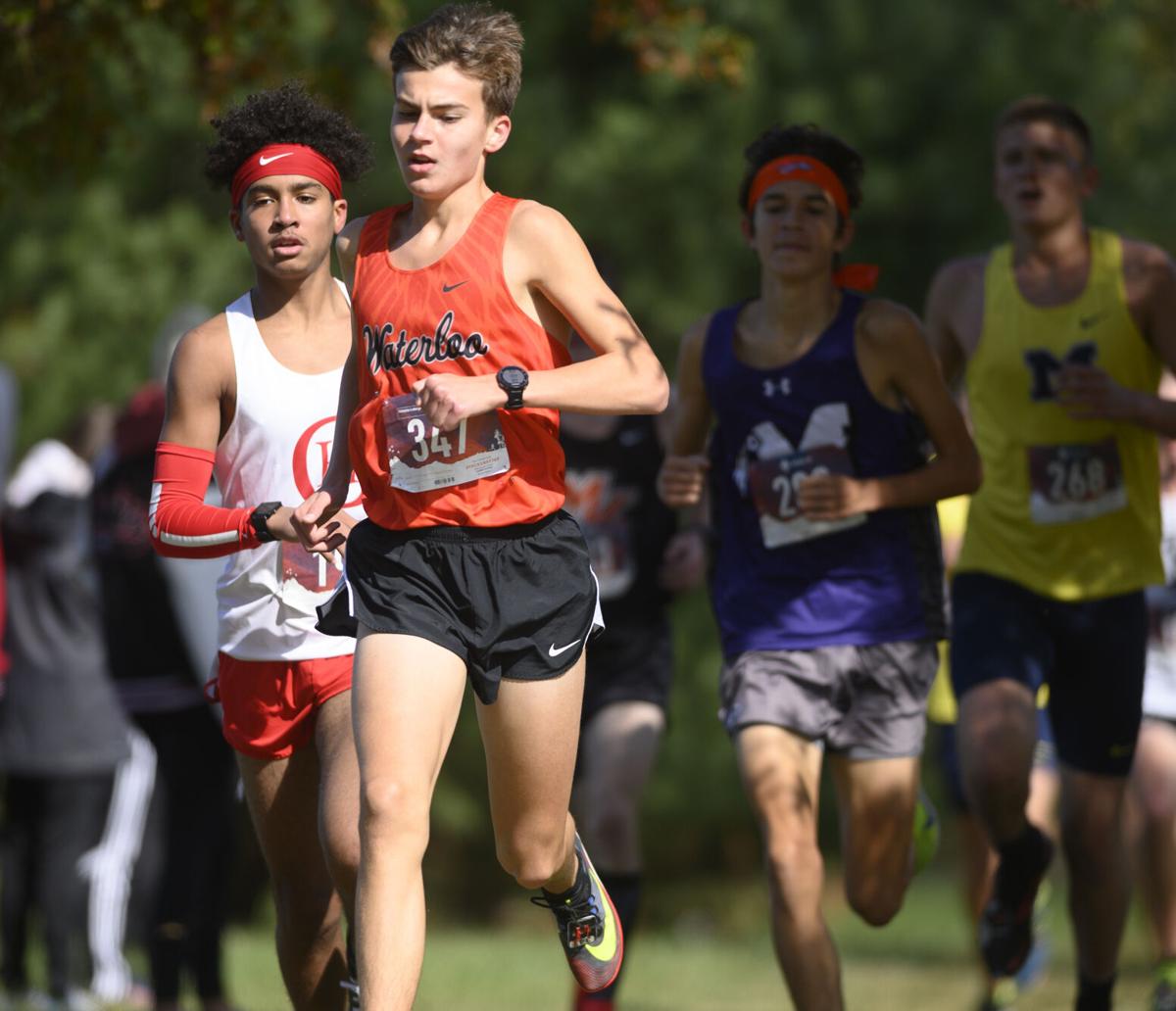 Waterloo's Joe Schwartz leads a pack of runners during the Class 2A Highland Regional meet on Saturday, October 24, 2020 at Alhambra Fireman and Legion Park in Alhambra, Ill. Paul Halfacre, STLhighschoolsports.com 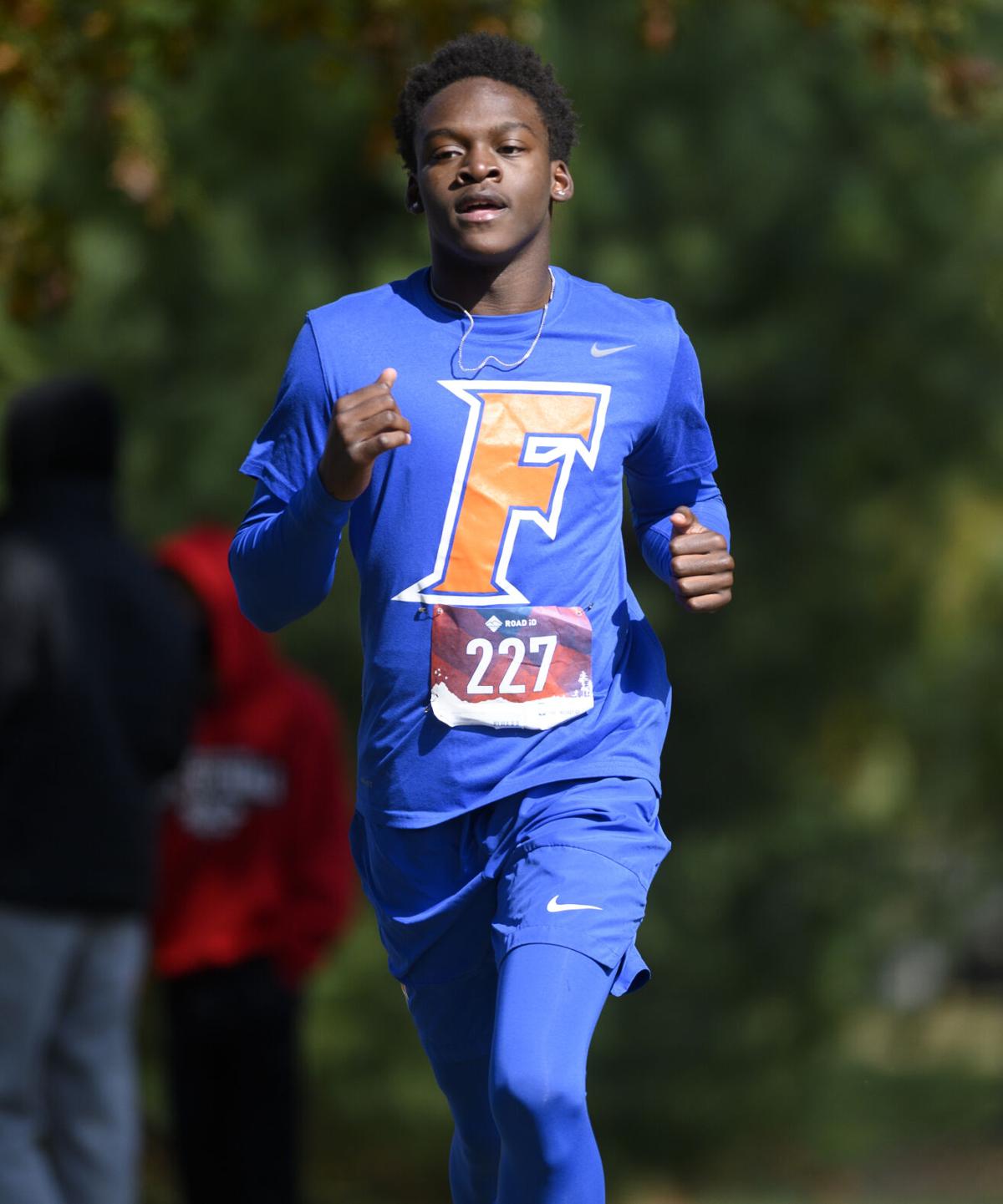 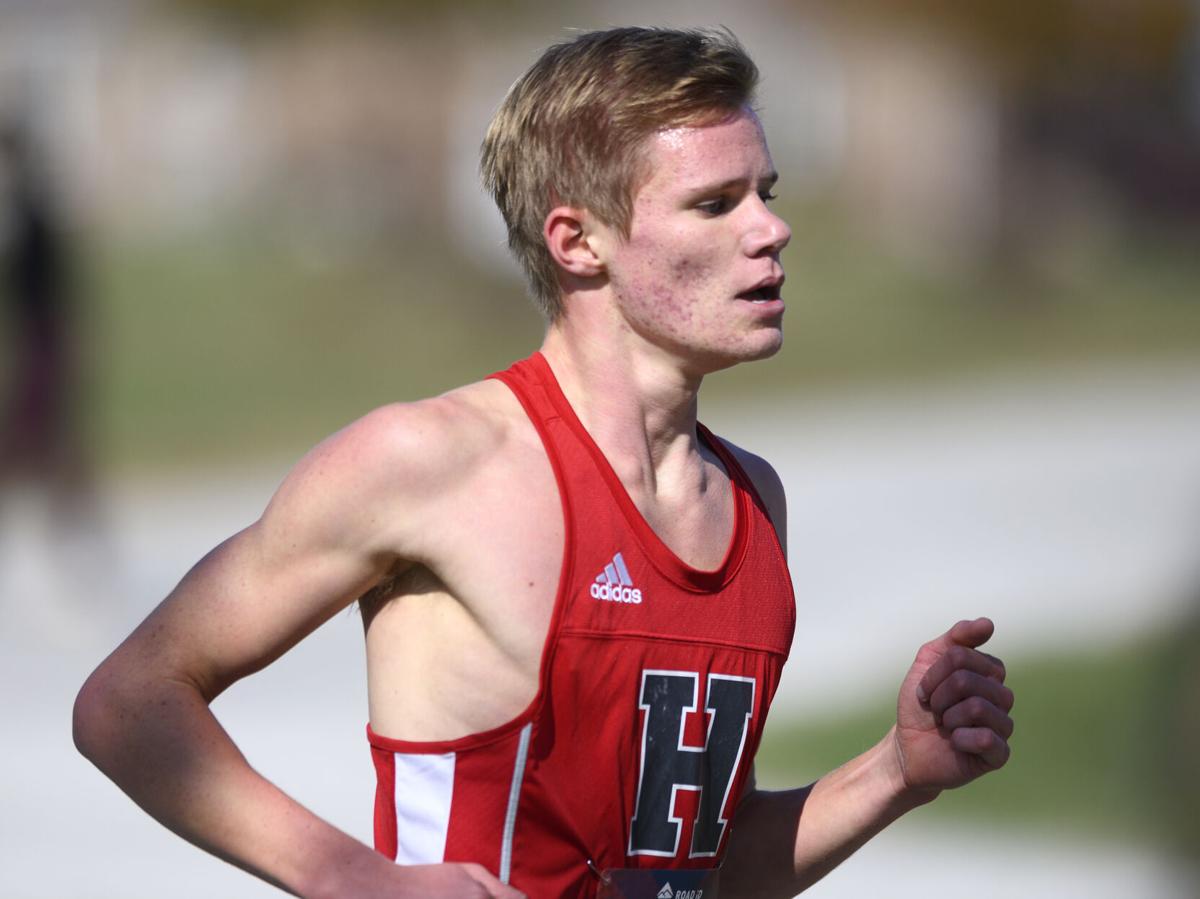 Highland's Easton Rosen runs over a hill during the Class 2A Highland Regional meet on Saturday, October 24, 2020 at Alhambra Fireman and Legion Park in Alhambra, Ill. Paul Halfacre, STLhighschoolsports.com 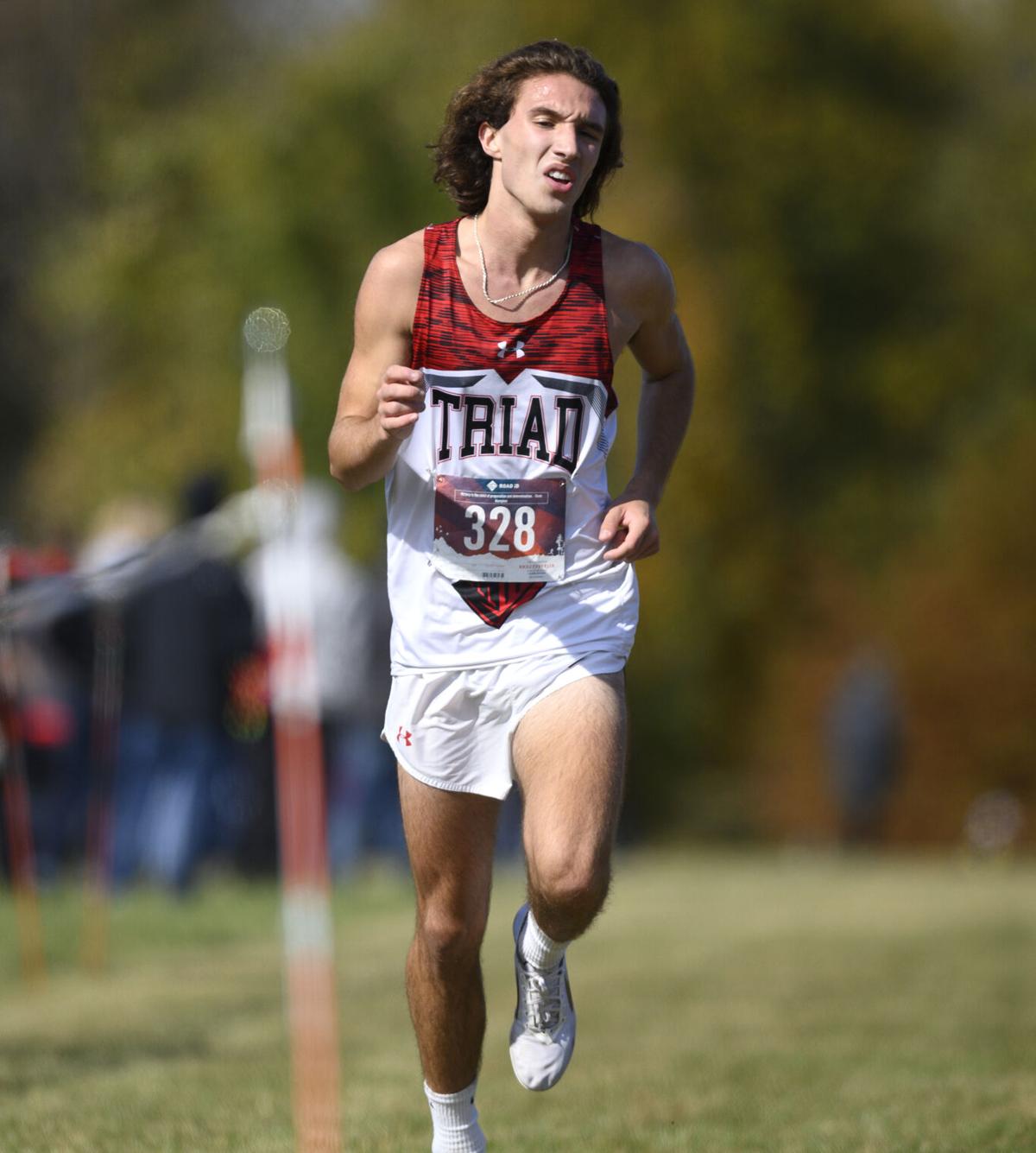 ALHAMBRA, Ill. — Noah Jensen found himself surrounded by a sea of neon yellow.

His deep purple uniform stood in extreme contrast to his surroundings, but the Mascoutah High senior was not out of his element because his teammates - also known as the purple train - swarmed around him as he powered through the course.

"Hearing them cheer was such a huge motivator," Jensen said. "They weren't on the course with me, but running by them and hearing them all cheering helped. They all want the best for you and the team. We all had the same vision."

In a new format where there were three different races, the outcome was still the same as Mascoutah secured its second consecutive regional title with 50 team points to win the Class 2A Highland Regional at Alhambra Fireman and Legion Park on Saturday afternoon.

"I'm so glad we won that plaque right there," Mascoutah senior Josh Sturgill said. "This year it means a lot because we won't be able to go after more medals after sectionals."

Marion, by virtue of a second-place performance with 70 points, also qualified for sectionals at Olney Central College on Oct. 31 as did Carbondale (94), Triad (124) and Highland (134).

Due to coronavirus pandemic restrictions, the sectional meet will be the final meet for the 2020 cross country season. The Illinois High School Association had originally planned to have the season end after the regional meet but extended the season to the sectional level on Sept. 23.

Six of the top seven Mascoutah runners blazed the three-mile course in under 16:45 minutes.

"I'm really excited for the team," Miller said. "I felt that we ran all the way we hoped for. We were all where we needed to be."

The new format, introduced due to the coronavirus pandemic, had three heats for the boys competition. The first race would consist of up to three runners per team. The second and third races would feature up to two runners per team, per race.

"It was a whole different picture," said Cozzi who ran in the first race. "That first race, the No. 1, 2 and 3 set the whole picture for the rest of the race. It's a lot of stress on us, but it makes us run faster."

Mascoutah, which has prided itself in its eight-team victories this season by running in a tight-knit pack of five to six runners, had to switch gears to accommodate the new format.

"The way we divided them up is who runs the best together," Mascoutah coach Darren Latham said. "They were still working together. It wasn't as big, only two or three people, but it was still a pack mentality approach. Just watching them on the sidelines yelling and cheering them on, it was still a team effort."

Even though Jensen would have preferred to have been surrounded by his teammates in purple, the Marion runners surrounding him in the second race served as good replacements.

"Those Marion guys I was running with were a good challenge, they were pushing me really hard," Jensen said. "I enjoyed it because I haven't ever really been at the front of the race. While I enjoy running with my team and everything, it was nice to be in front for once."

SLUH overcome a host of obstacles in its way and capture its third consecutive runner-up finish at the state meet with a second-place showing at the Class 5 state championship meet at Gans Creek Cross Country Course on Saturday.

COLUMBIA, Mo. — George Blanco had a secret weapon while everyone was stuck running on their own.

Helping the other runner, who had collapsed just short of the finish line, cost Nathaniel Doty a top-25 finish.

Waterloo's Joe Schwartz leads a pack of runners during the Class 2A Highland Regional meet on Saturday, October 24, 2020 at Alhambra Fireman and Legion Park in Alhambra, Ill. Paul Halfacre, STLhighschoolsports.com

Highland's Easton Rosen runs over a hill during the Class 2A Highland Regional meet on Saturday, October 24, 2020 at Alhambra Fireman and Legion Park in Alhambra, Ill. Paul Halfacre, STLhighschoolsports.com