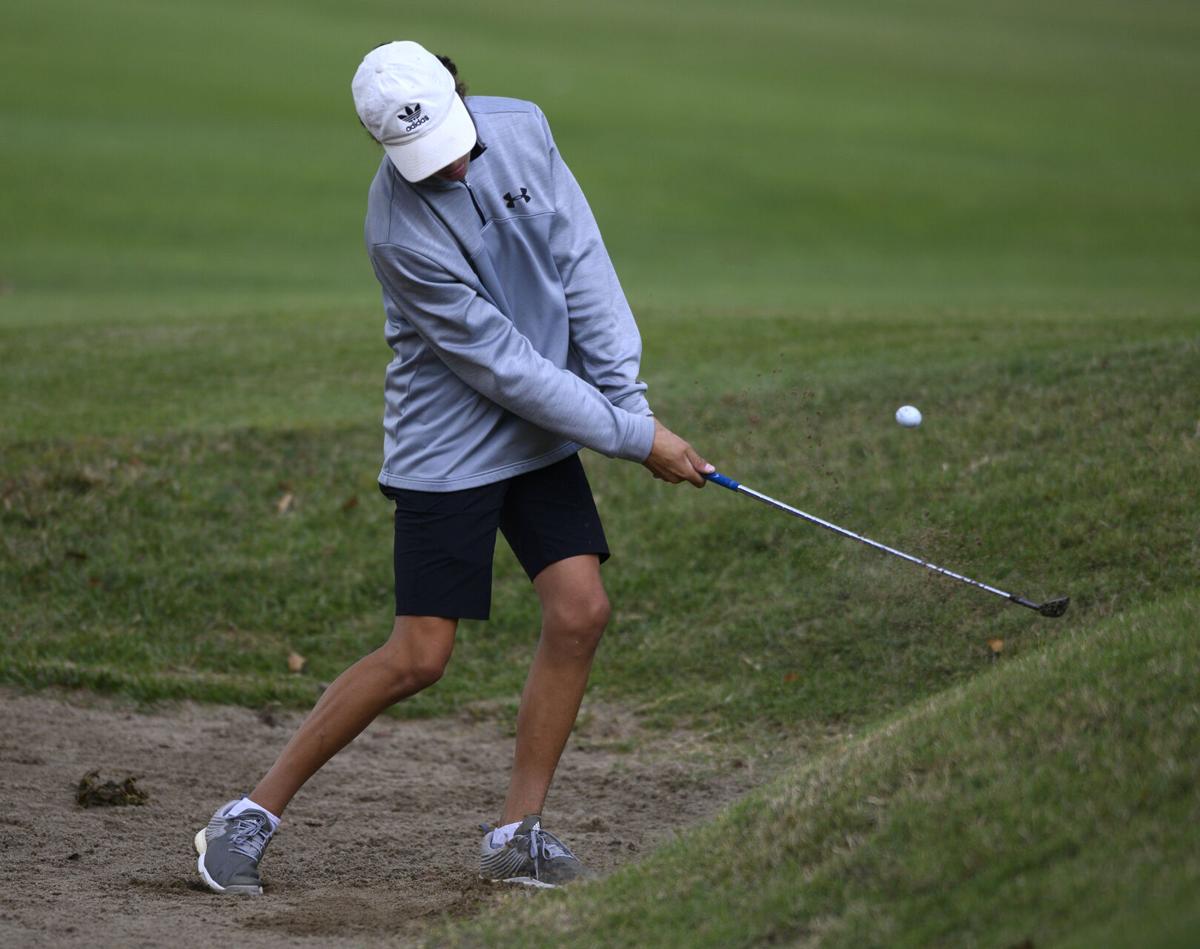 Edwardsville's Carter Crow hits the ball out of the bunker during the Crusaders Invitational on Monday, September 28, 2020 at St. Clair Country Club in Belleville, Ill. Paul Halfacre, STLhighschoolsports.com 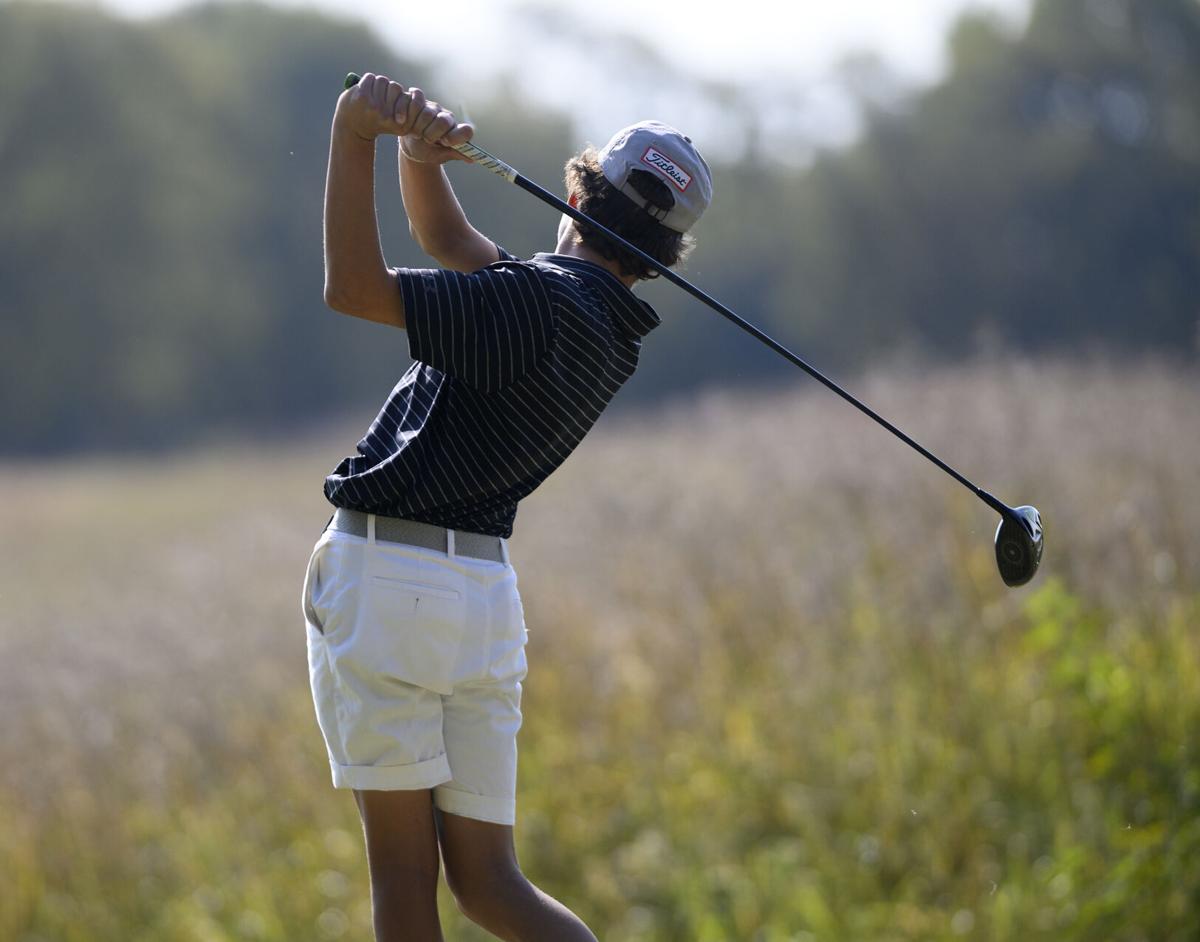 Edwardsville's Carter Crow hits the ball off the tee during the Class 3A Edwardsville regional tournament on Tuesday, October 6, 2020 at Oak Brook Golf Club in Edwardsville, Ill. Paul Halfacre, STLhighschoolsports.com

WOOD RIVER — Carter Crow would like to take his play on the golf course this week and bottle it up for use the rest of the season.

The Edwardsville High sophomore fired his second consecutive 3-under 69 on Thursday at Belk Park Golf Course to win both the overall and large-schools division titles at the Madison County Tournament. That matched the 69 he carded at Tuesday's Alton Tee-Off Classic at Spencer T. Olin Golf Course.

“If you told me I would do it, I probably wouldn't believe you,” Crow said. “I've never had a round like that, so to have two back-to-back is pretty awesome.”

His superb effort led the Tigers to the large-schools team title with a 305, which was 21 shots better than defending tournament champion Highland.

That followed a 307 in a narrow runner-up finish at the Alton Tee-Off Classic.

“They've had a great week so far and I'm really happy with the way they've played,” Edwardsville coach Adam Tyler said. “I try not to focus too much on the number. It's one of things that I feel like if you just play the course and take it one shot at a time, it's all going to play out the way it should play out. But, we are young and we are not experienced, so that 305 can turn into a 325 in a hurry.”

Despite his incredible round in which he beat Highland's Bryce Knackstedt by five strokes, Crow was able to find one thing he didn't like.

After a 3-under 33 on the front nine, he birdied two more holes on the back nine to sit at 5-under with two holes to play. But, matching bogeys on those two holes dropped Crow back to a still-strong 3-under.

That went against how he's played all of his other holes out of the starting gate this season.

“I've just been super relaxed, not worried about anything,” he said. “I'm not trying to press, just trying to get pars and whatever happens happens. I also had a bunch of tournaments in the summer and I learned off those to fix my swing around. Now it's just all comfortable and natural to me.”

Tyler was actually quite OK with Crow posting bogeys on the final two holes.

Edwardsville had four sophomores and two freshmen in its winning lineup Thursday.

Brothers Drew and Ryan Suhre carded matching 78s, while sophomore Bennett Babington's 80 was the other score that counted among the team's top four.

Freshman Mason Lewis, who had a 70 at Spencer T. Olin on Tuesday, finished as an eighth-place individual medalist Thursday, but had his score cut, showing the Tigers' enviable depth.

“I would take an 81 from a freshman every day of the week and twice on Sunday,” Tyler said. “The fact he shot 81 and didn't count for us is really a testament to the rest of the team.”

Alton Marquette junior Aidan O'Keefe shot a 2-over 73 to win the small-schools individual title. He shared that honor last year with Father McGivney sophomore Joey Hyten, who was third this time around with a 76, one shot behind Metro-East Lutheran senior Antonio Ybarra.

“It means a lot. Let's try to make it three years in a row (next year),” O'Keefe said. “I played well. My chipping was a little bit off, but I can't complain. I shot a 73. My driver was amazing today. I didn't miss too many with it. I kept everything around the green. I only made two big mistakes.”

Like Crow, O'Keefe has had a strong week, posting 71s at both Monday's Hickory Stick Invitational and Tuesday's Alton Tee-Off Classic before his 73 on Thursday.

“I really like it (the way the season's started),” he said. “It couldn't be much better. Just got to keep trying to keep it going.”

Father McGivney compiled a team total of 331 to beat Marquette by 12 strokes for the small-schools team title.

“We're happy. We've got a good group of kids and we're very young,” said Griffins assistant coach Greg Mullican, who was filling in for head coach Vic Reznack, who was at home recovering from eye surgery on Tuesday. “It feels good. They're proud of their efforts today and that's what it's about. We're excited to get the trophy and take it back to school.”

WOOD RIVER — Entering the final stretch of play Tuesday morning, Caden Cannon knew exactly what he needed to do.

Edwardsville's Carter Crow hits the ball out of the bunker during the Crusaders Invitational on Monday, September 28, 2020 at St. Clair Country Club in Belleville, Ill. Paul Halfacre, STLhighschoolsports.com

Edwardsville's Carter Crow hits the ball off the tee during the Class 3A Edwardsville regional tournament on Tuesday, October 6, 2020 at Oak Brook Golf Club in Edwardsville, Ill. Paul Halfacre, STLhighschoolsports.com