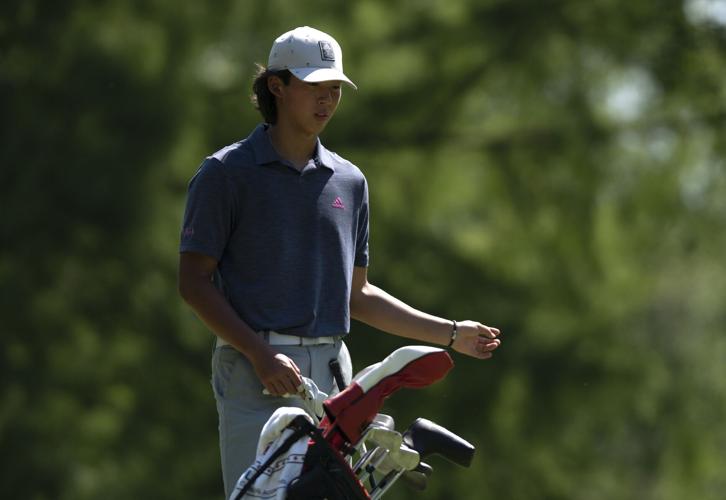 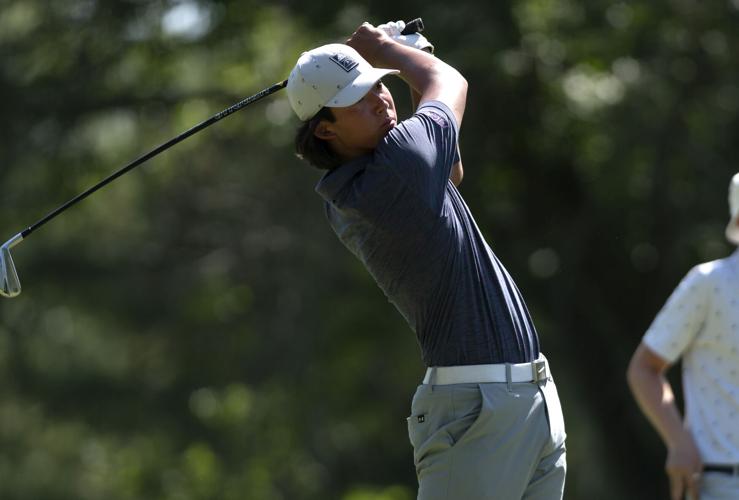 William Park hits the ball off the tee during the final day of the Junior PGA Championship Qualifier on Wednesday, June 29, 2022 at Spencer T. Olin Golf Course in Alton, Ill. Paul Halfacre, STLhighschoolsports.com 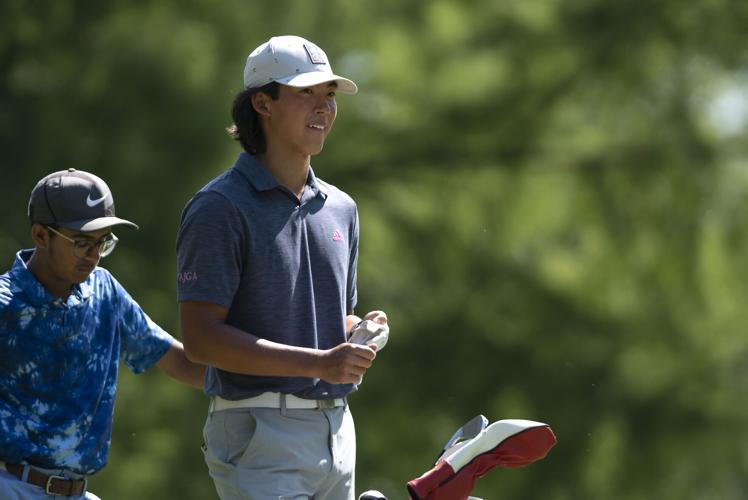 ALTON — William Park will have a busy schedule come this fall, so he plans on enjoying a nice, laid-back summer.

The recent Ladue graduate fired a 1-under-par 71 on Wednesday to finish with a two-day total of even-par 144 to win the overall boys division of the Junior PGA Championship qualifier at Spencer T. Olin Golf Course.

“When my dad and I are scheduling tournaments, we're sort of choosing more important ones and just cutting out everything else,” Park said. “So, there will be a little more time in between each event. There will be a lot of working out, just having fun and relaxing. Not really playing, just practicing. Just enjoying life, I guess.”

The win automatically qualified Park for a spot in the 46th Boys Junior PGA Championship, which will be Aug. 2-5 at Cog Hill Golf & Country Club in Palos Park, Ill., just southwest of Chicago.

“I'm going into college in a few months, so I guess that would be a really cool closer for the summer season,” he said. “I just wanted to play good, that's all. I know that this leads to the next event, but it was just a matter of playing good.”

Park will be attending Ohio State starting this fall, but a rigorous academic schedule will likely lead to precious little time for golf.

“I'm going into pre-med, so it's gonna be a little stacked up,” he said. “I do want to play. I just don't want to go in and have to juggle all those things. I don't want to go and have to drop golf or slip some grades through. I won't be able to practice or play a lot of golf, so I'm gonna miss it, but it will be fine. I'm looking forward to school. I'll do it when I can, but I'll have to make time for it.”

Park came into Wednesday's final round in a tie for first after an opening-day score of 1-over 73, but came through with a strong under-par round to close out the win.

“The bad shots were a little better than yesterday and I was just missing less shots than I did yesterday,” said Park, who tied for 15th at the Class 4 tournament last month. “For the past few years, I've done a lot of two-day events. So, I have learned how to deal with pressure going into the second round, especially if I'm tied for the lead. It wasn't much different than those other times.”

Parkway North senior-to-be Krish Patel was the one tied with Park for the lead coming in to the final round, but he carded a 3-over 75 to finish four shots back.

“I tried to keep my mind off it (the lead after the first round), watching things other than golf just to get my head around it,” Patel said. “It was just miscues on putting. I was making everything yesterday, but not those four or five-footers today on the front.”

Patel tied for 29th at the Class 4 tourney and is hoping a strong summer will lead to an even better showing in his final high school season next spring.

“This summer will just build confidence in what I'm doing,” he said. “I'm just looking forward to playing well, making it to state again and then probably playing in college.”

Parkway West sophomore-to-be Savyasaachi Kandula fired a 1-over 73 in the final round to finish tied with Patel for second at 4-over for the tourney.

“It was definitely an improvement from recent rounds and it was nice to improve today from yesterday. It's good to see things are heading in the right direction,” Kandula said. “This was, at least in my opinion, a fairly challenging course and I was competing against people older than me, so there was plenty of pressure trying to qualify for the Junior PGA. I fell a little short, but it's good to see that the things we've been working on are paying off.”

Kandula finished in between Park and Patel at the Class 4 tourney, tying for 23rd as a freshman and springing hope that a strong offseason will lead to even bigger things as a sophomore.

“It's good to have this as a learning experience and I can build on this just like I have with all the other high school tournaments,” Kandula said. “This is just reaffirming what I've always believed. They're just results, honestly. It doesn't really change my mindset or my outlook.”

The Junior PGA tourney girls qualifying spot went to Tolton junior-to-be Audrey Rischer, who fired a sizzling 5-under 67 in the final round to finish with a two-day total of 7-under 137.

“I'm really excited. It's my first time getting to play in this,” said Rischer, who finished second in Class 3 last fall. “I started the day three back, so I just kind of had the hungry mentality of coming in from behind as the underdog. That's always fun.”

Former Edwardsville standout Riley Lewis had the lead after a stellar 5-under 67 in the first round, but a 2-over 73 left her at 4-under overall, three shots behind Rischer in second place.

Rallo, who will play at Central Missouri, fired a 2-under 70 in the final round to finish in third place at 1-under for the tourney.

“I just kind of woke up and this morning and knew if I was gonna have a run at it, I'd have to shoot under par,” said Rallo, who tied for 10th at the Class 4 tourney. “So, I just went out there and played pretty aggressive. And I usually don't do that. I usually play safe, where par is good. But, I wasn't accepting any pars today. Birdies only.”

Piar, who won the Illinois Class A tourney and was the All-Metro player of the year, shot a 3-under 69 in the final round, but a 4-over on the first day left her at 1-over for the tourney.

“This is my home course, so I knew I had to have a better day today,” said Piar, who will play at California State-Northridge. “I stayed for an hour after yesterday, just practicing on the putting green, and my putting was much better today.”

Players that didn't win the two-day qualifier still have a chance to nab the Gateway PGA's other spot for both boys and girls as part of an overall points system that will play out over the course of several tournaments this summer, the last of which will be next week, July 5-6 at Gateway National Golf Links.

William Park hits the ball off the tee during the final day of the Junior PGA Championship Qualifier on Wednesday, June 29, 2022 at Spencer T. Olin Golf Course in Alton, Ill. Paul Halfacre, STLhighschoolsports.com