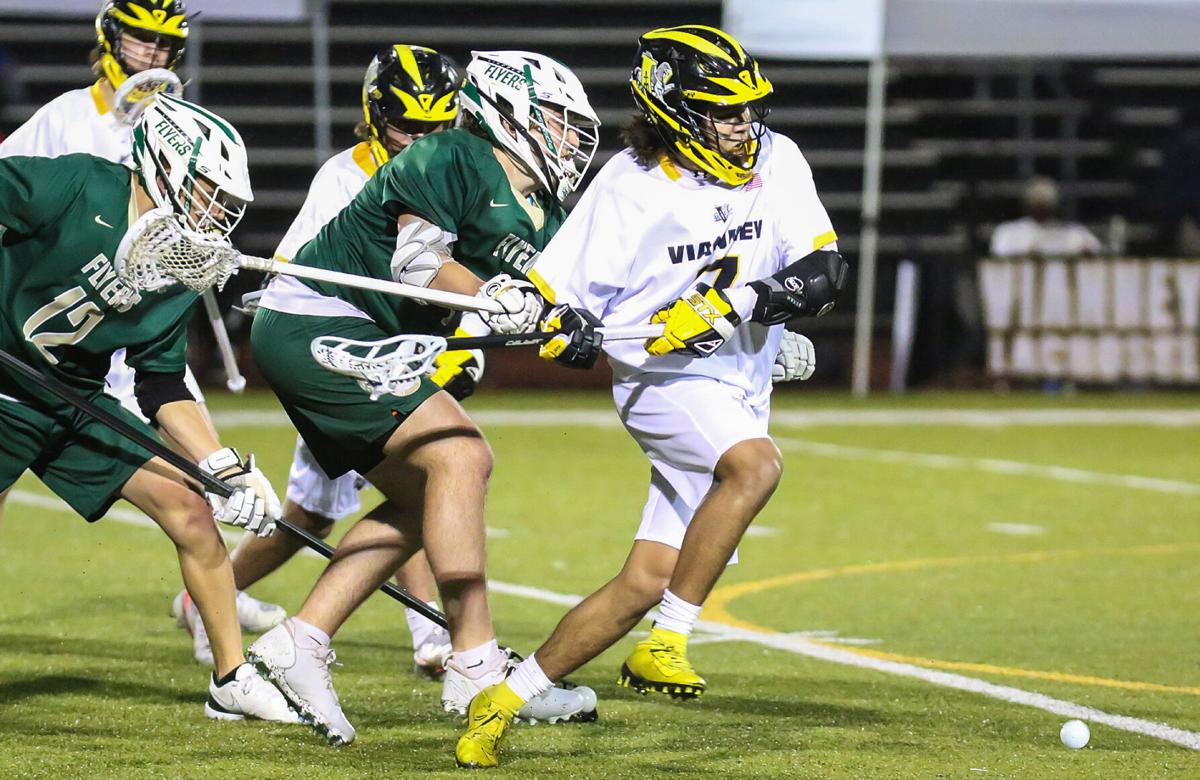 Vianney's Paul Berra (right) tries to get to a loose ball while being pressured from behind by Lindbergh's Austin Wharton during a boys lacrosse game on Thursday, April 8, 2021 at Vianney High School in Kirkwood, Mo. Paul Kopsky | STLhighschoolsports.com 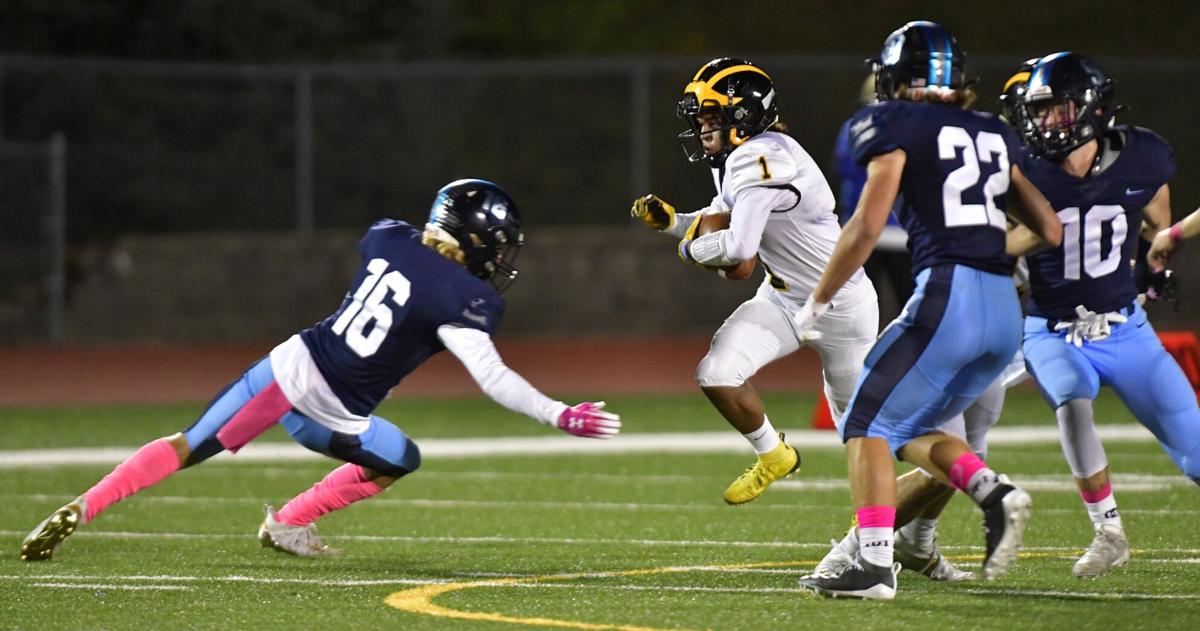 He quickly outraces his teammate, scoops the ball in a single swoop and fires a shot into the net before gingerly returning to the back of the line.

Berra has ingrained the collection of ground balls into his soul, accumulating an amazing 10 in an April 6 win against Kirkwood and leading the Griffins (3-5) in that category.

“I set my goal to refuse to lose ground balls,” Berra said. “I’ll push people around, I’ll run through as many guys as I can and I’ll prove that I’m the hardest worker out there.”

Berra, who also led the Vianney football team in receiving yardage, has used his fingers to accomplish great feats this season.

Fingers he feels fortunate to still have.

His ordeal began on an air-conditioned drive to a friend’s house in the summer of 2019 when he noticed his index finger had turned white and had gone numb.

“I couldn’t feel it and it was really cold to the touch,” Berra said. “I started biting at it to see if I could feel anything and I couldn’t.”

Berra thought the phenomenon was temporary and did not give it further thought. The next day, three more fingers were white and numb.

He was diagnosed with Raynaud’s Syndrome, a rare disorder that causes blood vessels to narrow when a person is cold.

Over the next two weeks, his fingers turned purple and pain shot through them as doctors tried to find a remedy.

“It felt like needles were stabbing my fingers,” Berra said. “I was getting 30 minutes of sleep a night, lying in bed in severe pain and no pain medications were helping.”

He tried to attend school but had to be dismissed within an hour.

“I was in so much pain, I couldn’t even concentrate,” Berra said.

Ulcers began forming on his fingers, and he was admitted to the hospital, where he was further diagnosed with lupus, an autoimmune disease that was causing his body to attack itself and triggering the appearance of Reynaud’s Syndrome.

Then came the conversation that he may lose his fingers.

“Athletics have been my main No. 1 love, so it hit me hard,” Berra said. “Everything I’m good at involves my hands and it made me so much more grateful for them.”

“I could feel the burning sensation of blood kicking in where it hadn’t been in so long,” Berra said. “It was scary. I wondered if (my fingers) were getting worse, but they were glowing bright pink.”

Berra now applies nitroglycerin paste to his fingers prior to practices and games, especially in cold weather. He must keep his body and hands warm, often wearing layers on his arms and legs and at least three pairs of gloves on his hands.

“The first 10 minutes of the game, my fingers are numb and it’s hard to feel the stick in my hand,” Berra said. “It takes a while of warming up, running around and being physical before the heat comes back to my body and my hands go back to normal.”

Berra must be extra cautious to avoid contracting COVID-19 due to its probability of flaring up his lupus and advancing an attack on his compromised immune system.

“As a (high school) kid, I didn’t want to act scared of it, so I was acting all tough, but COVID has really been a scary time for me,” Berra said.

Vianney teachers have accommodated Berra in the classroom, allowing him to dictate to a classmate when unable to type on a keyboard.

“Those tiny circles are not fun,” Berra said.

Berra would like to play a sport in college, and after lost seasons due to hospitalizations and COVID-19 cancellations, he is treating every practice and every game as a gift.

“He plays as if he’s making up for all the lost time he had,” Vianney coach James Spink said. “A lot of the mental side of lacrosse can’t be taught, and in terms of compete level and determination, he has all of those at the highest level.”

On one occasion, Berra had 13 vials of blood drawn and then logged a full practice. When he sprained his ankle, he sat out one practice before returning to the starting lineup.

“I’ve missed out on half of my high school career and having to watch my team play from a hospital bedroom has sparked a fire in me,” Berra said.

And now when a ground ball skids across the turf, there is a good chance it ends up in a lacrosse stick held by layers of gloves protecting much-appreciated fingers.

“This struggle put into view not to take these moments for granted,” Berra said. “I’m determined to prove myself by working harder than anyone on the field.”

Vianney's Paul Berra (right) tries to get to a loose ball while being pressured from behind by Lindbergh's Austin Wharton during a boys lacrosse game on Thursday, April 8, 2021 at Vianney High School in Kirkwood, Mo. Paul Kopsky | STLhighschoolsports.com 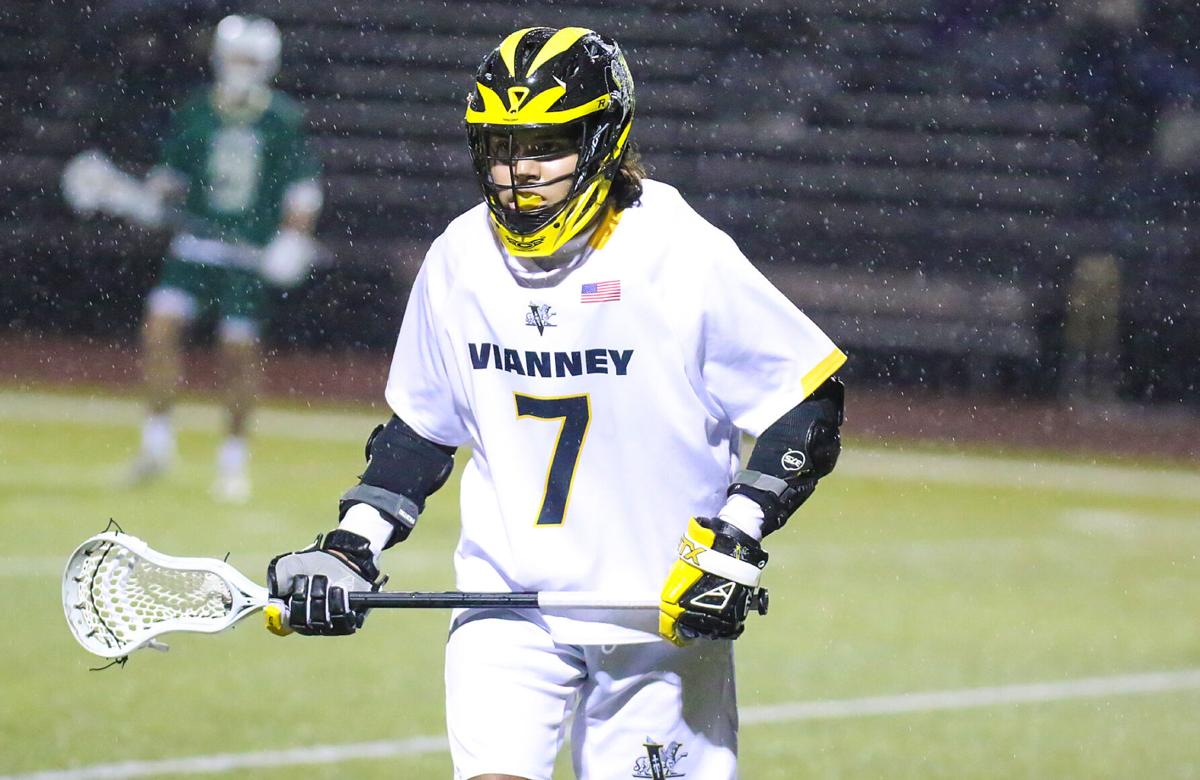