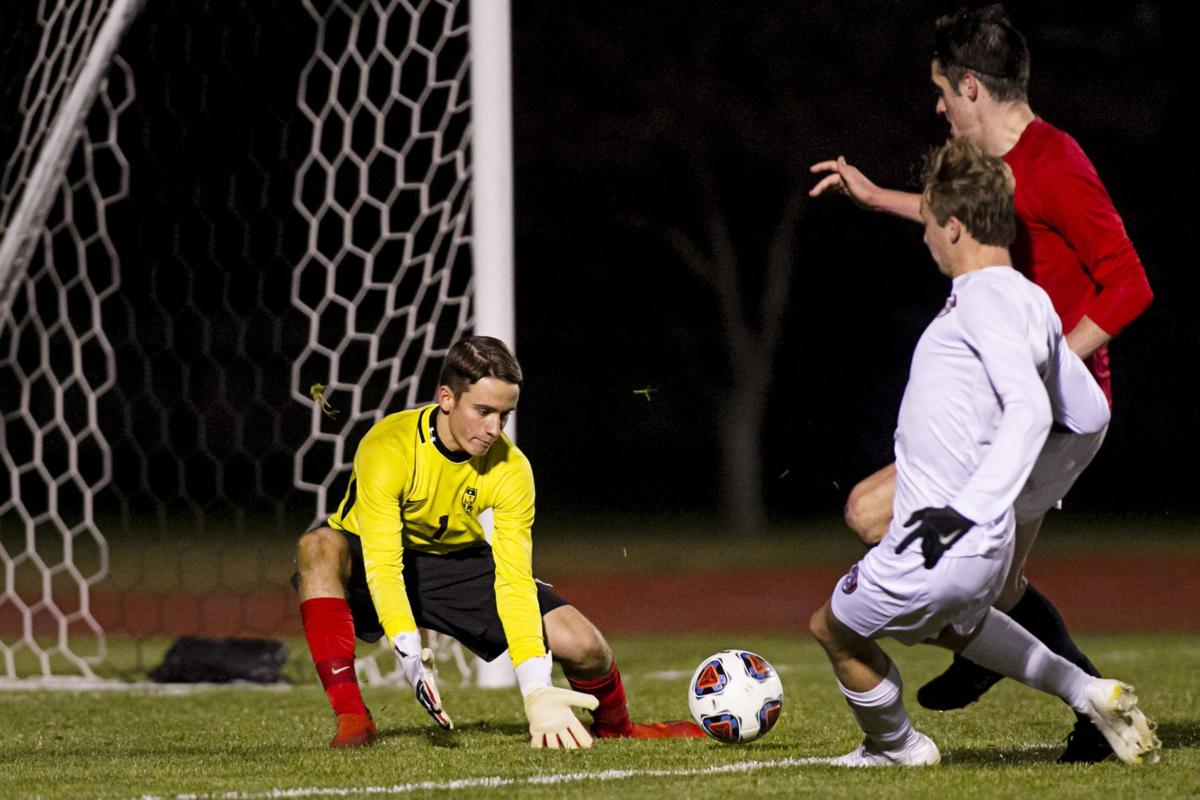 Triad goalkeeper David Dupont (1) steps out in front of shot by Morton's Justin Hart (6) as the Knights battle the Morton Potters during the Class 2A boys soccer Super-Sectional Tuesday Nov. 5, 2019 at Glenwood High School in Chatham, Ill. [Jason Johnson, Special to STLhighschoolsports.com] 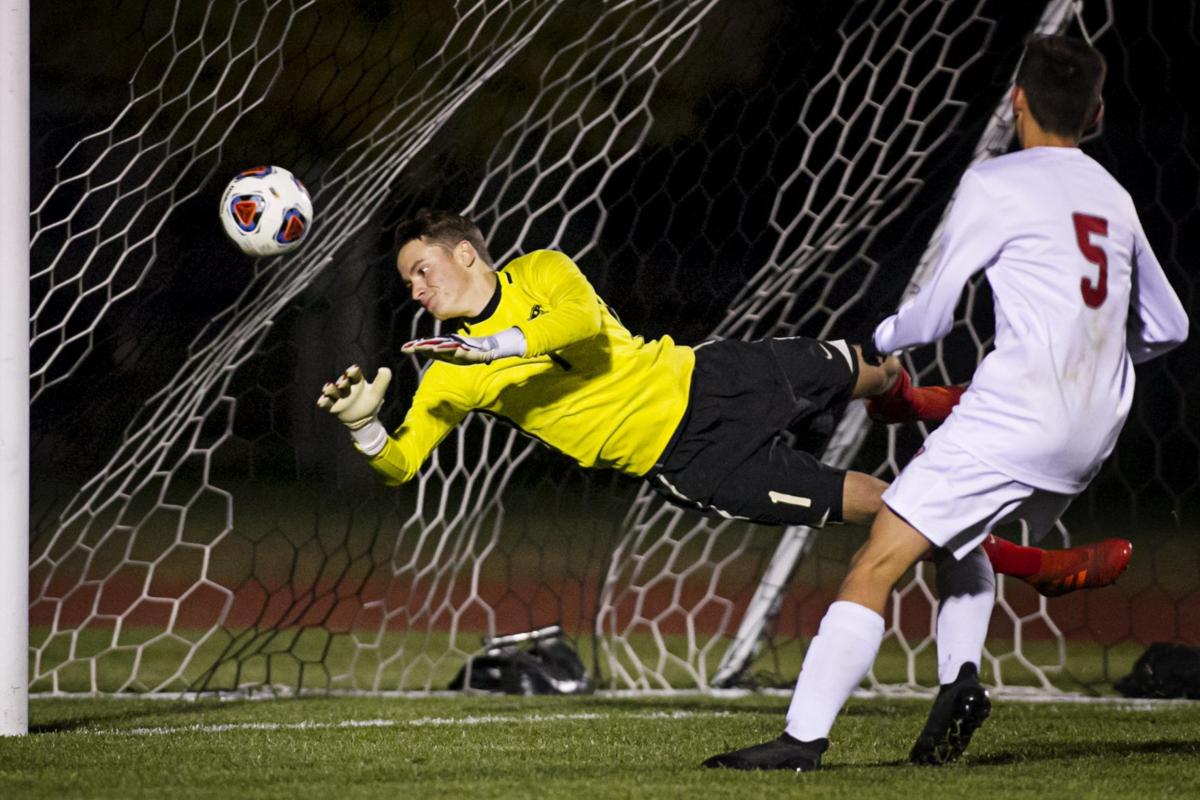 Triad's goalkeeper David Dupont (1) misses a shot from Morton's Blake Gibson (10) during the second half of the Class 2A boys soccer Super-Sectional Tuesday Nov. 5, 2019 at Glenwood High School in Chatham, Ill. Jason Johnson, Special to STLhighschoolsports.com

Throughout his high school soccer career, there has been one constant for Triad goalkeeper David Dupont.

For more than a season, Dupont has had fellow sophomore Brayden Tonn right beside him, with one or the other patrolling the posts. The duo split time in goal last season, separated by a mere 60 minutes.

Tonn battled through an injury during pre-season workouts which the Knights discovered was Osgood-Schlatter disease — an inflammation of the area just below the knee where the patellar tendon from the kneecap attaches to the tibia.

It kept Tonn from being used as regularly as he once was and allowed Dupont to take the reigns as Triad's top net minder.

“It was definitely difficult to see Brayden get hurt, I hate seeing fellow teammates be injured,” Dupont said. “Him being injured made it hard for him to recover and regain his great ability to play goalkeeper. My thoughts were that I would most likely being playing more and that I would have to step up and play my game."

Dupont has been at his best ever since, which has paid dividends for Triad.

The Knights (22-3) will make their first appearance in a Class 2A state semifinal since 2009 against Crystal Lake South (19-4-4) at 1 p.m. Friday at Hoffman Estates High School.

“It's been amazing to the say the least,” Dupont said. “I have been playing well this season and I plan to carry that on into the final four. I do my best back in the goal to help my team out as much as possible.”

The 5-foot-11 brick wall owns a 21-2-2 record with a 0.48 goals against average and 16 shutouts this season. He was solid in a 3-1 win over Morton in a super-sectional, where he and the Knights picked up their fifth consecutive win.

Tonn has logged 448 minutes with a 0.75 goals against average while still splitting time with Dupont. While he's not getting as much action as he did as a freshman, he's been happy to help Dupont hone his craft.

“Brayden had a few health problems and David has stepped forward,” Triad coach Jim Jackson said. “He's been hot. Brayden works just as hard as David. As freshmen, they were both very good keepers, but as sophomores, David has stepped up a little. David is solid back there.”

Dupont and Tonn's work in goal have taken Triad to new heights, along with the back line, which has only allowed 0.56 goals a game.

“The defense has been absolutely stellar,” Dupont said. “Having Michael Tentis and Austin Borri to take control of the back field has been a big help. Michael is a great defensive player and knows what he is doing at all times and with Austin and his speed, its hard for people to get past him. Also Ty Presley and Joseph McCllough have been great wing backs during the whole season. Our defense gets the job done.”

Triad's season will come to a close this weekend, one way or another, which will be bittersweet for Dupont and his teammate.

“This team had been awesome to practice and play games with and every single guy on this team is considered family to me,” Dupont said. “Our goal is to win state and we plan on making that happen.”

Triad goalkeeper David Dupont (1) steps out in front of shot by Morton's Justin Hart (6) as the Knights battle the Morton Potters during the Class 2A boys soccer Super-Sectional Tuesday Nov. 5, 2019 at Glenwood High School in Chatham, Ill. [Jason Johnson, Special to STLhighschoolsports.com]

Triad's goalkeeper David Dupont (1) misses a shot from Morton's Blake Gibson (10) during the second half of the Class 2A boys soccer Super-Sectional Tuesday Nov. 5, 2019 at Glenwood High School in Chatham, Ill. Jason Johnson, Special to STLhighschoolsports.com