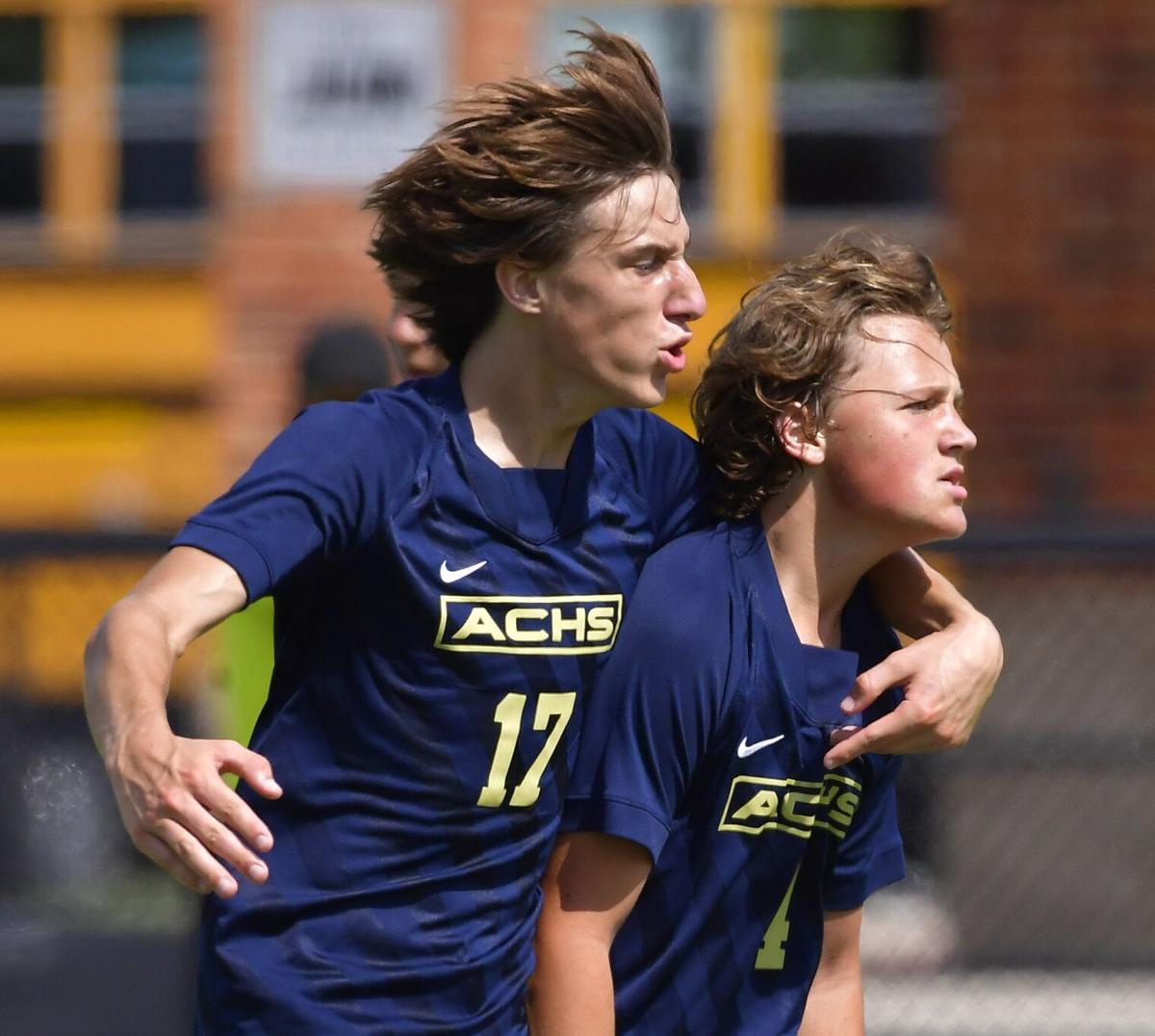 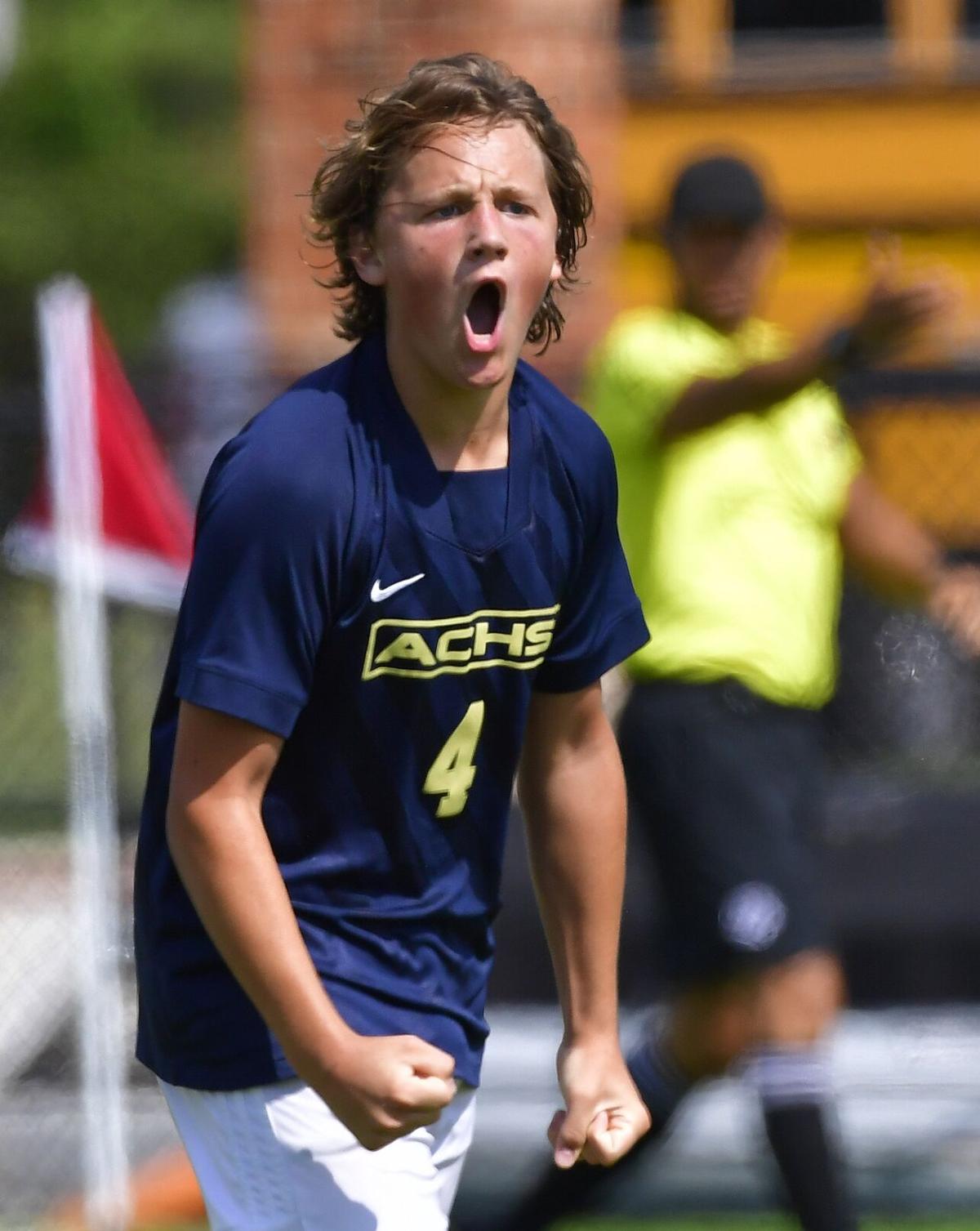 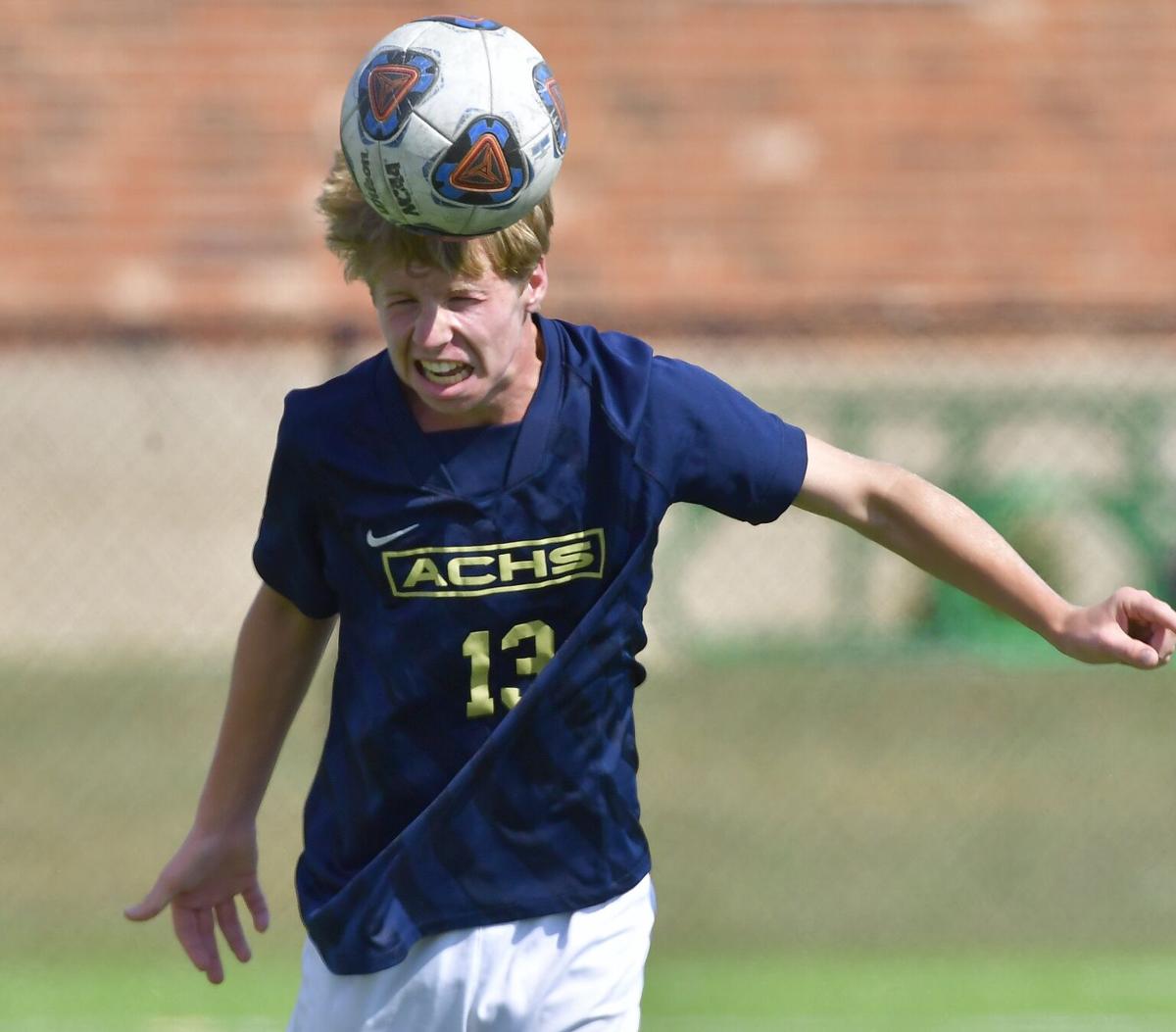 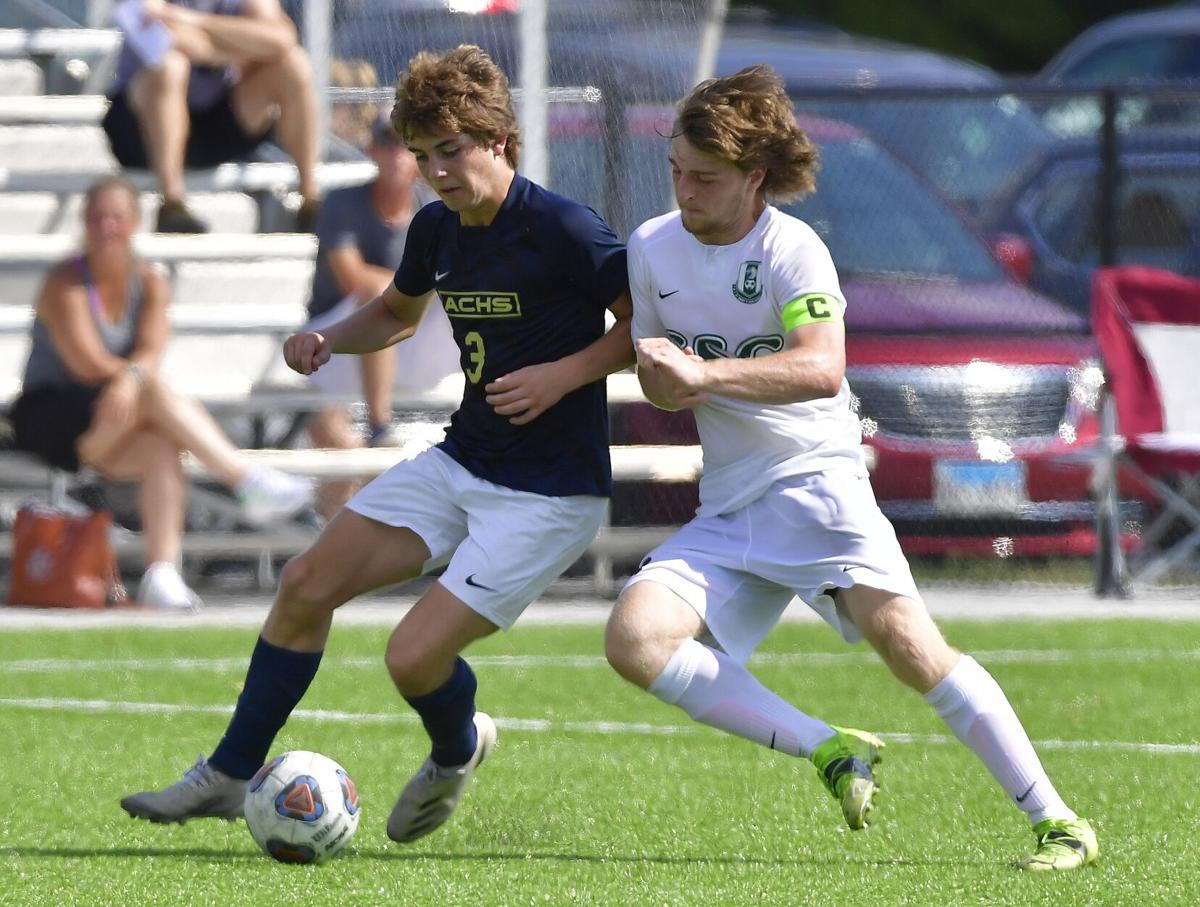 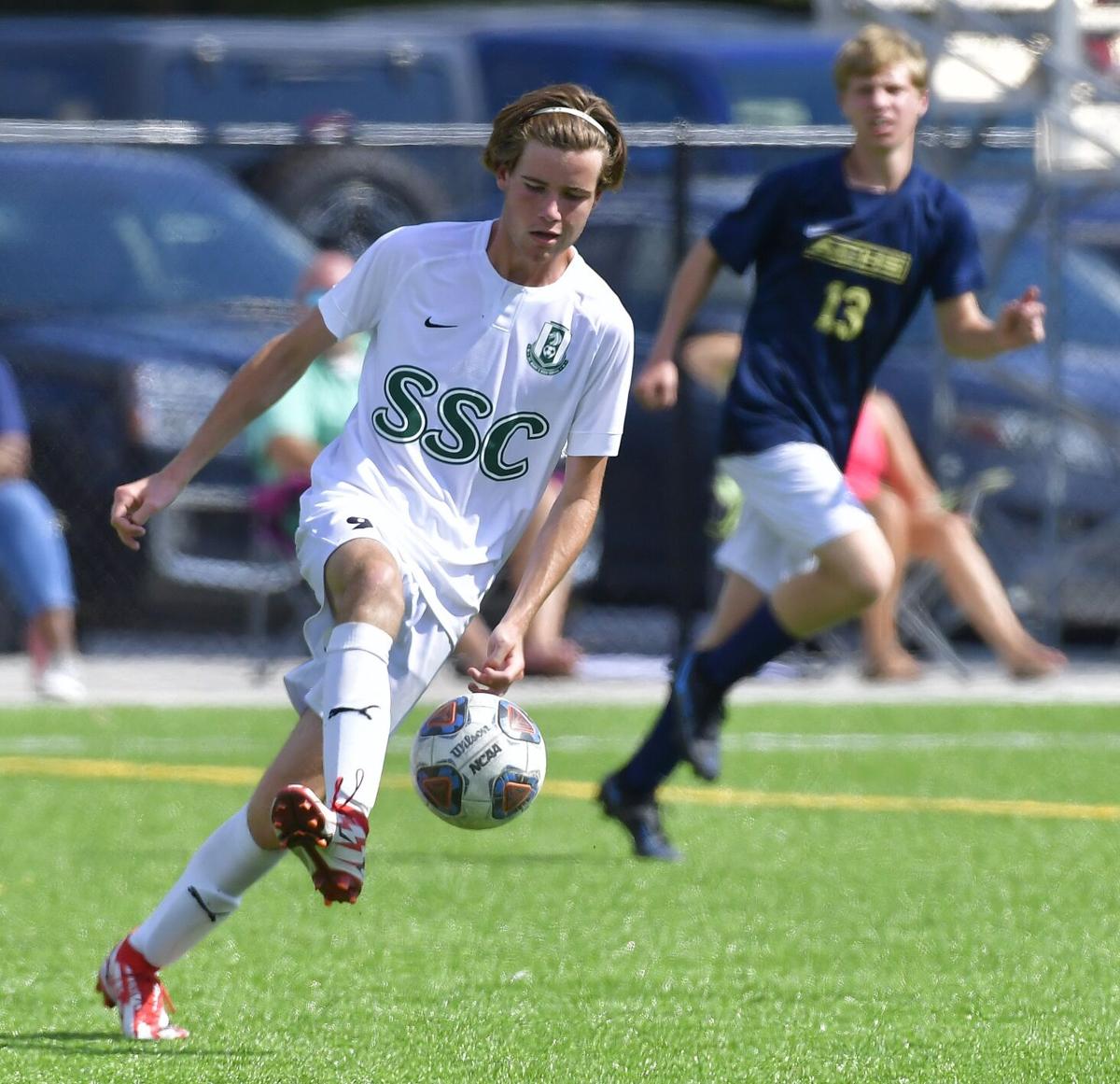 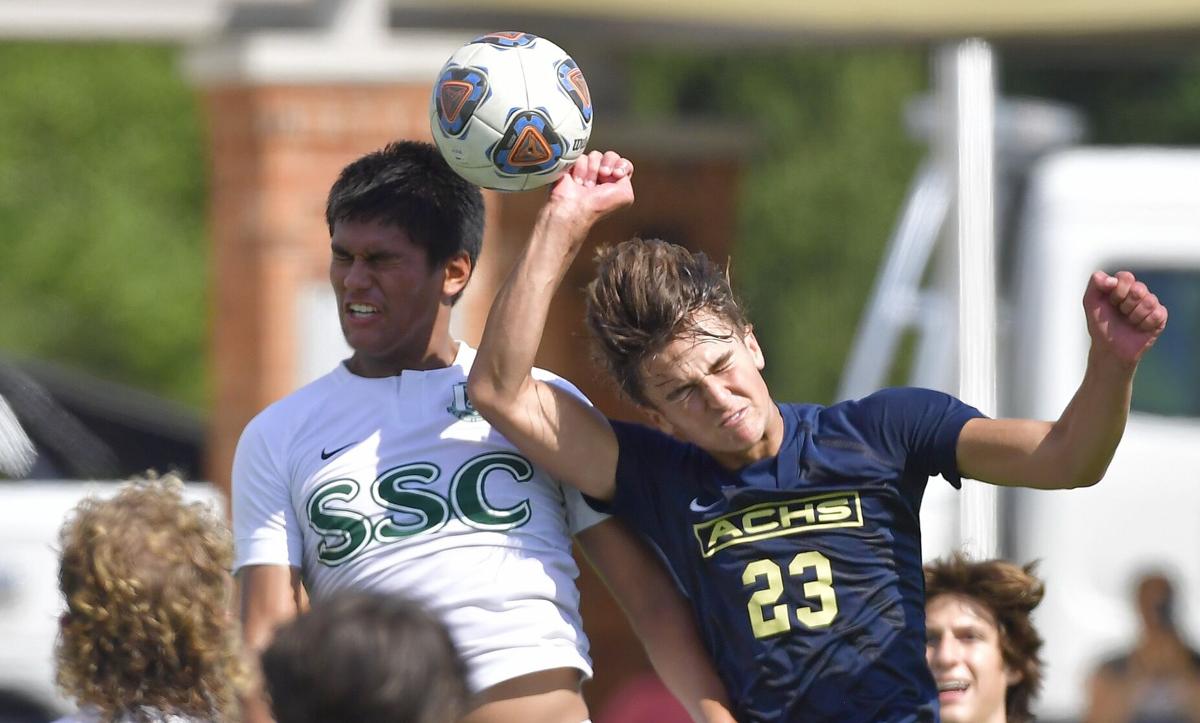 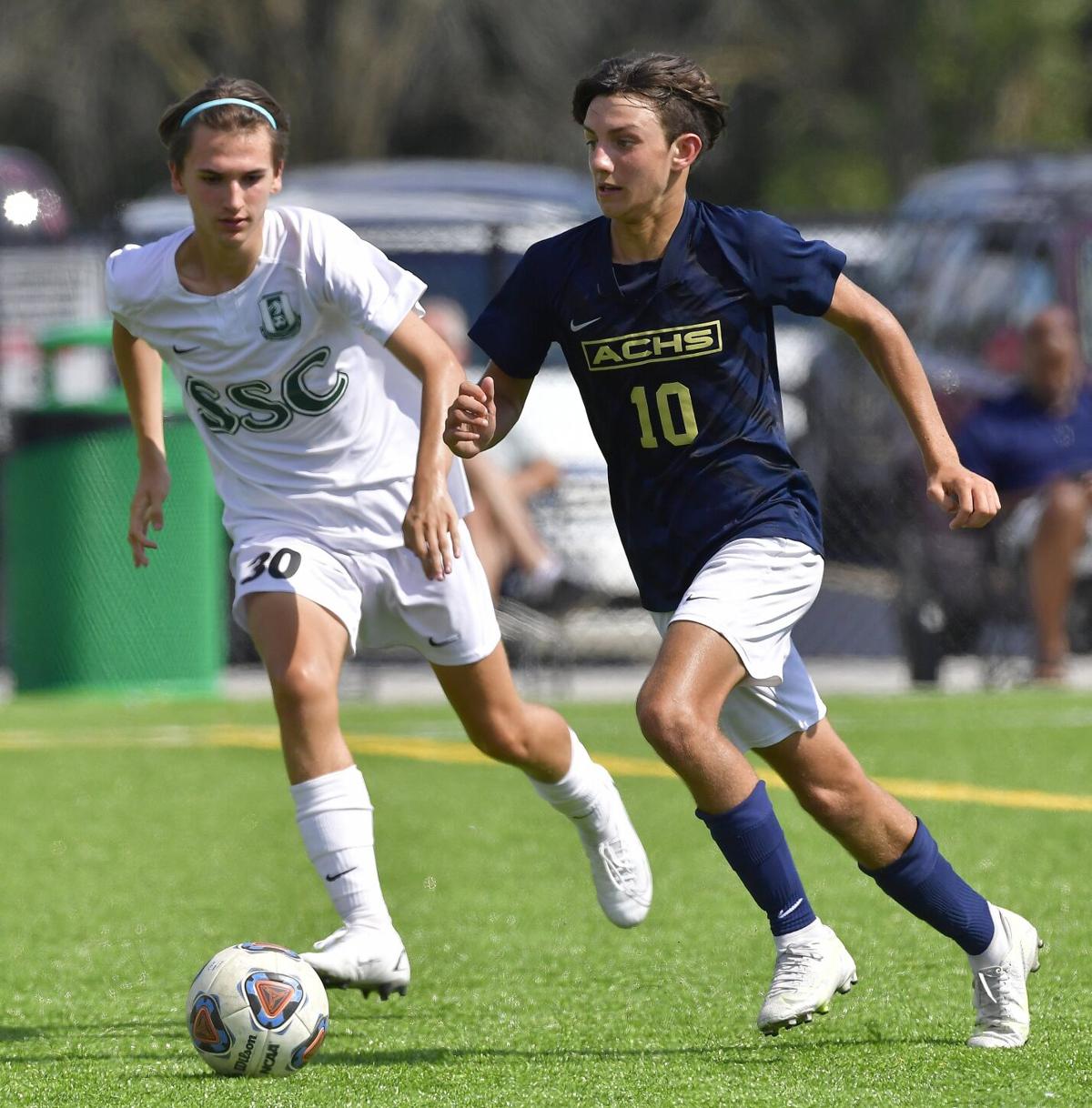 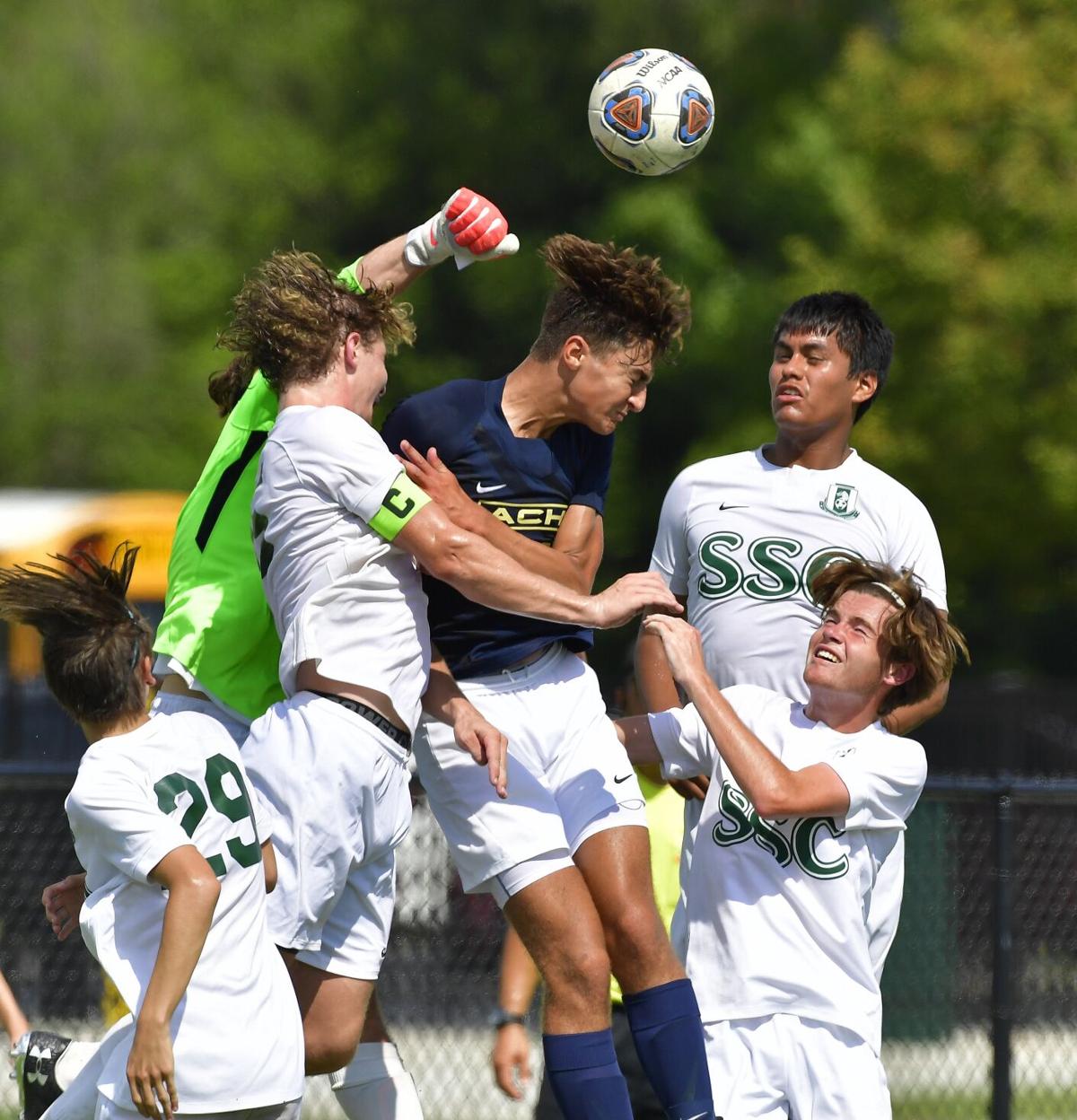 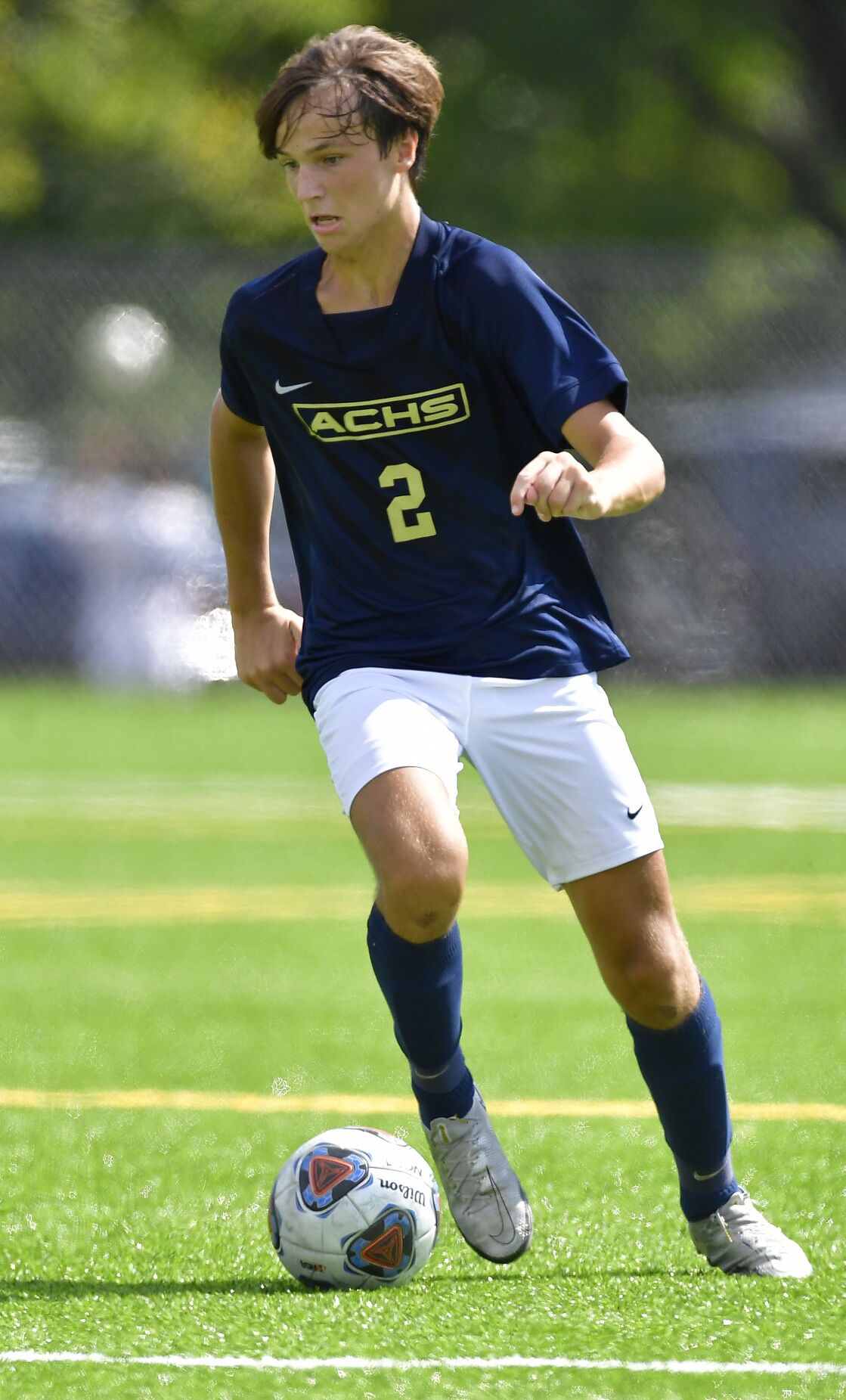 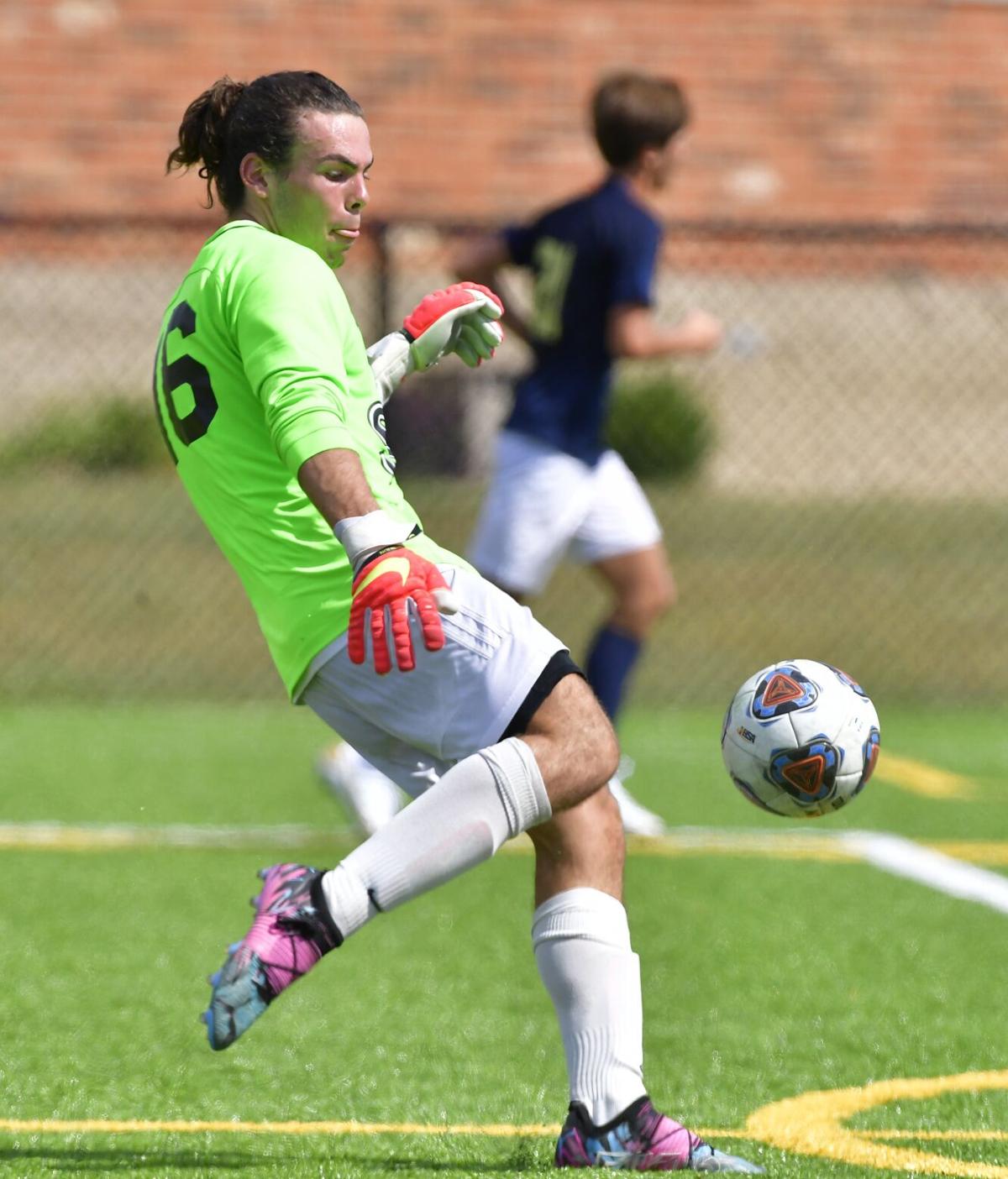 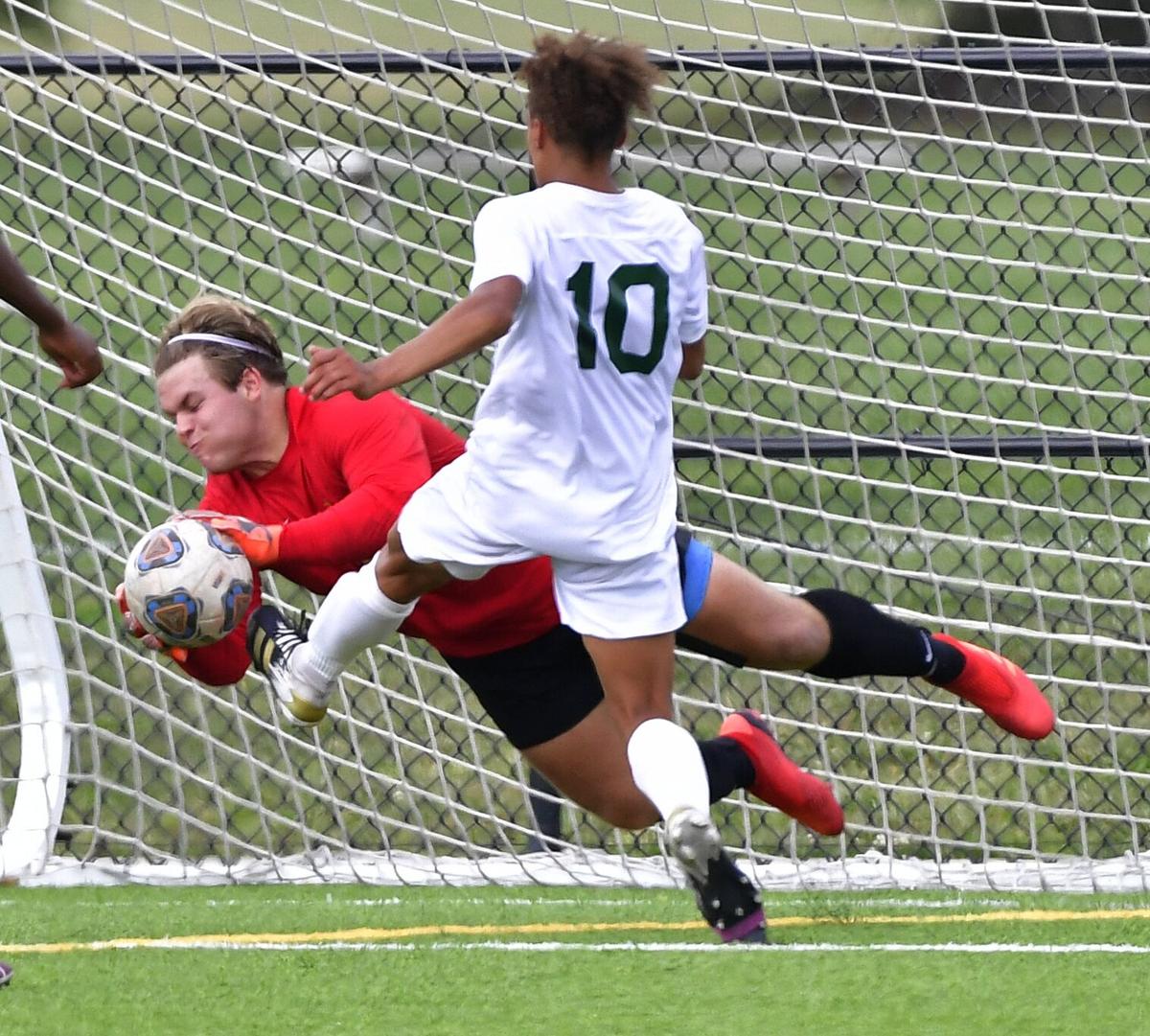 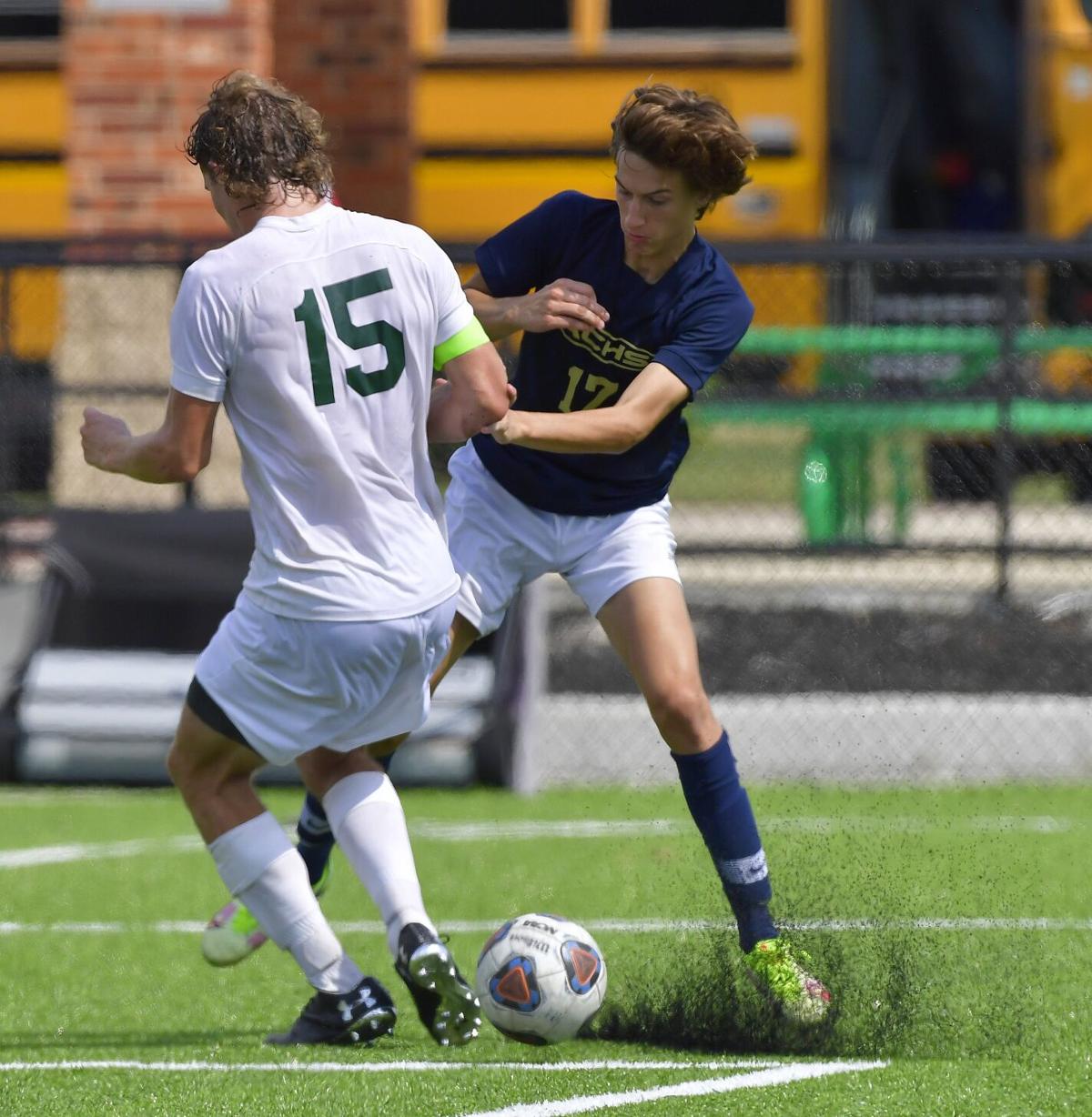 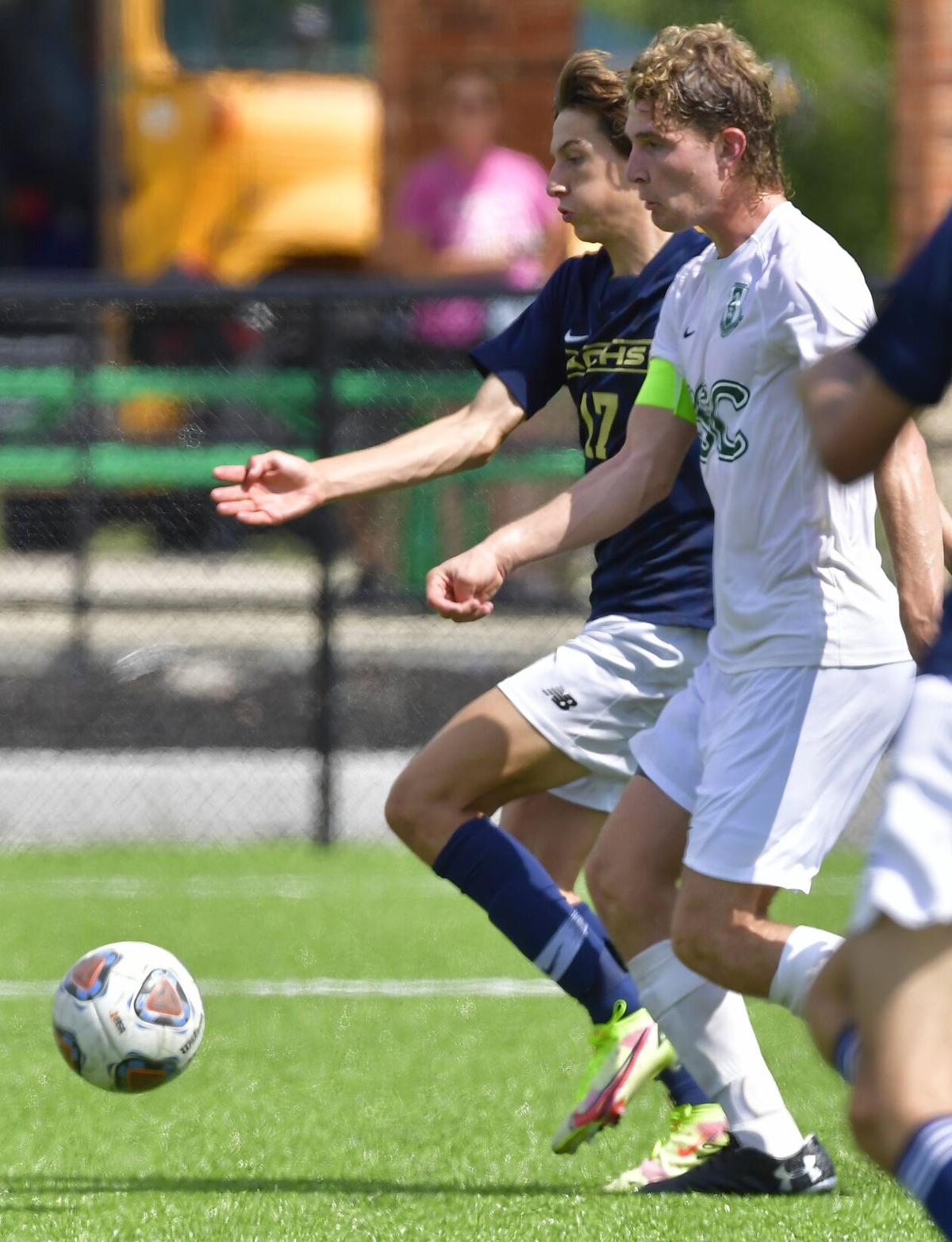 ALTON — With four players sidelined by injury, the Althoff boys soccer team is looking for others to step up.

Sophomore Max Gilliland answered the call on a steamy Saturday, knocking in both goals in the Crusaders' 2-0 victory over St. Mary's in the Alton Marquette Shootout at Gordon Moore Park.

Gilliland, a midfielder, converted both times from deep in the box, first on a left-side cross from junior Brody Bugger in the 35th minute, then on a right-side feed from junior Jake Pollock in the 52nd minute.

Bugger and Pollock, "drove their defenders and I was in the right spot at the right time," Gilliland said. "We've been down (in numbers) for a little bit, but we're starting to build back up. It's been a good team effort."

It was the second straight victory for Althoff (9-3-1) following losses of 1-0 against West Chicago and 7-0 against Naperville Central before a 1-1 tie against Belleville West. The Crusaders are without sophomores Hank Gomric (hamstring) and Makhi Holtman (broken arm) and juniors Connor Lynd (concussion) and Michael Cole (ankle).

Gilliland's goals were his second and third of the season.

"He got to the right spots in front of the goal and put them in when he had an opportunity," Althoff coach Skip Birdsong said. "They were great feeds, but he showed composure and put them in the back corner.

"He's only a sophomore. We always hesitate to put too much on a younger player. But he's certainly capable. He doesn't panic, which is what finishing is. He's very composed. He doesn't get nervous or anxious like a lot of players do sometimes in front of the goal."

Senior Tyler Tieman was sensational in goal for the Crusaders, leaping to make two of his six saves off blistering free kicks by Dragons senior Cameron Laneman. One of Laneman's shots came from about one yard outside of the box after an Althoff foul.

"I'm not the tallest and I'm not the fastest," the 5-foot-8 Tieman said. "But playing a lot of sports helps with my lateral movement. I feel like I read the ball really good off people's feet. I kind of have that instinct of knowing where they're going, so I'm in the right spots at the right time."

Tieman also is a kicker and punter on football team, a guard on the basketball team and an infielder on the baseball team. His big saves kept pesky St. Mary's (4-4) off the board in a game that could have switched. Laneman's second attempt was the one Tieman most remembered.

"He hit a missile," Tieman said. "It was rough, and it dipped at the last moment. It was a good shot."

Tieman, one of many outstanding goalies in the St. Louis area this season, already has eight shutouts, including six solos. He has 73 saves and a 0.59 goals-against average.

"He's had a good junior and senior year, all within six months," Birdsong said. "He's still doing what he does every game. He's been outstanding all year. He's super athletic. He's an athlete. It's very deceiving when you look at him. You don't expect him to do some of those things. He covers the crossbar as well as anyone else does and he's 4 or 5 inches shorter."

St. Mary's couldn't match the Crusaders' depth. The Dragons do not have a junior-varsity team this year and were fatigued by the end of the match.

"They were a better technical team than us," St. Mary's coach Ryan Limb said. "We're good, we work hard, we're organized. We just don't have depth. This is everyone in our program. It's not ideal, but we compete. They work their butts off."

The Dragons' goalkeeper, senior Garrison Gralike, also played well. There was little to nothing he could have done to prevent Gilliland's doorstep goals, but Gralike soared to his right in the 70th minute to turn away a hard, on-target shot by Althoff junior Ryan Myatt.

"Our goalie keeps us in games," Limb said. "He makes saves he shouldn't make, but he couldn't do anything about (Gilliland's shots)."

In other shootout games:

Duchesne 2, Father McGivney 0: Senior Danny Parks converted a penalty kick in the first half and senior Joe Deluvia had a second-half goal as the Pioneers improved to 3-4. Freshman Cole Brockmeyer assisted on Deluvia's goal. Freshman goalkeeper Caden Wolfe made five saves in 40 minutes and earned his first varsity victory, sharing the shutout with sophomore Victor Quinteros. Father McGivney fell to 3-8.

Mater Dei 2, St. Pius X 0: The Knights (8-4) won for the seventh time in eight games behind goals by seniors Cade Kramer and Jan Zakovsky. Kramer also assisted on Zakovsky's score, with senior Quin Rakers picking up the assist on Kramer's goal. The Lancers fell to 5-3.

Whitfield 7, Gibault 1: Junior Tommy Wortham had a hat trick to lead the Warriors to their convincing victory. Since losing to Lindbergh 2-0 in its season opener, Whitfield has won four consecutive games and has outscored its opponents 18-2.

John Burroughs 4, Alton Marquette 1: Matt Christenson hammered in two goals and the Bombers received one goal apiece from senior David Bernal and junior Akil Dickerson as they bounced back from a 2-0 loss to Pembroke Hill on Friday. Burroughs (6-2) led 3-1 at halftime. Junior Tucker Desloge recorded two saves in goal. Marquette slipped to 6-6-1.

SLUH earns title at CBC: St. Louis University High finished 3-0 to win the CBC Tournament. The Junior Billikens (7-0-1) defeated De Smet 3-2 on Saturday to wrap up the championship as sophomore Grant Locker and seniors Stephen Saladin and Tyler Van Bree scored goals. SLUH opened the tournament with victories of 2-0 over Vianney and 3-2 over CBC.

The Althoff boys soccer team moved one victory from its first state tournament appearance since 1999.

COLLINSVILLE — One of the most talented and consistent boys soccer teams in the area also is one of the youngest.

EDWARDSVILLE — Jake Schildknecht glanced up at the clock as he sprinted to take a corner kick.

Coaches often discuss the importance of building a consistent, winning program, rather than one that goes up and down like the stock market.

De Smet continues to bounce back with victory against John Burroughs

LADUE — AJ Grewe has found a knack for scoring goals lately, and it's resulting in victories for De Smet.

COLUMBIA, Ill. — Throw the records out the window.

Jack Olwig scored with an assist from Jackson Allen in the second half to lift Chaminade to a 1-0 win over visiting CBC Saturday.