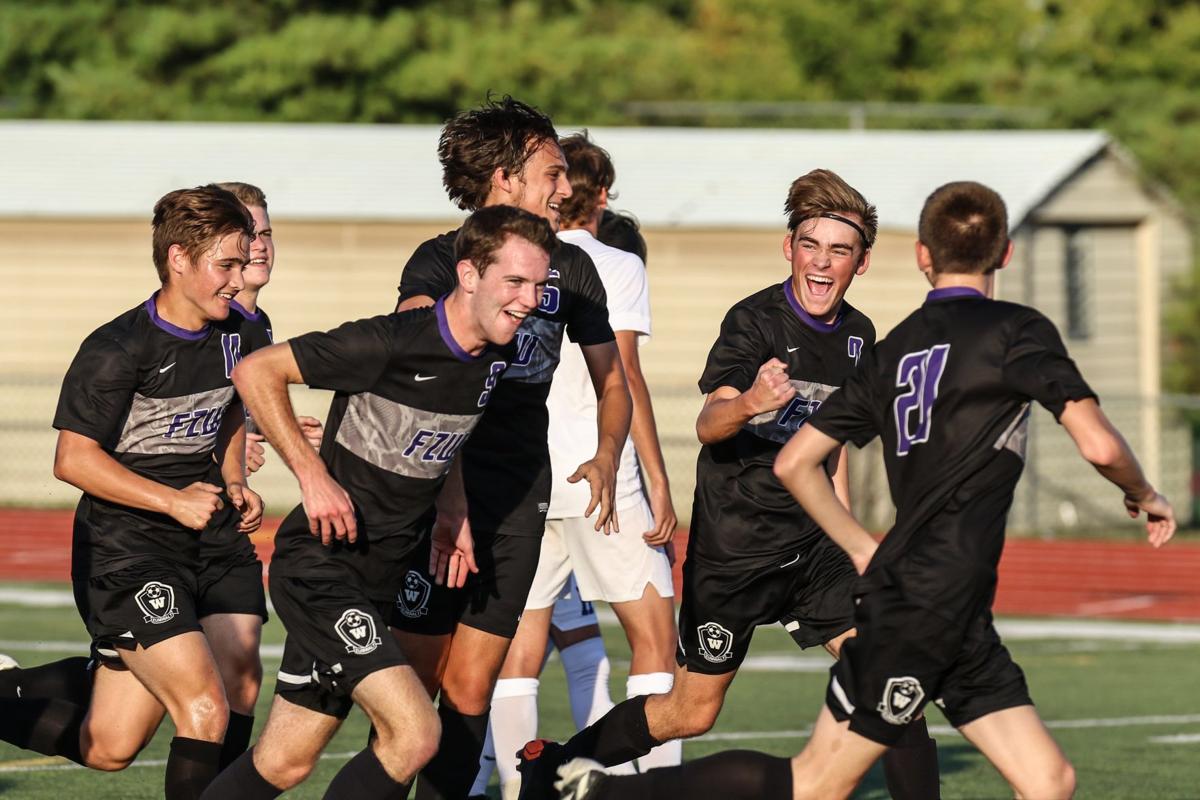 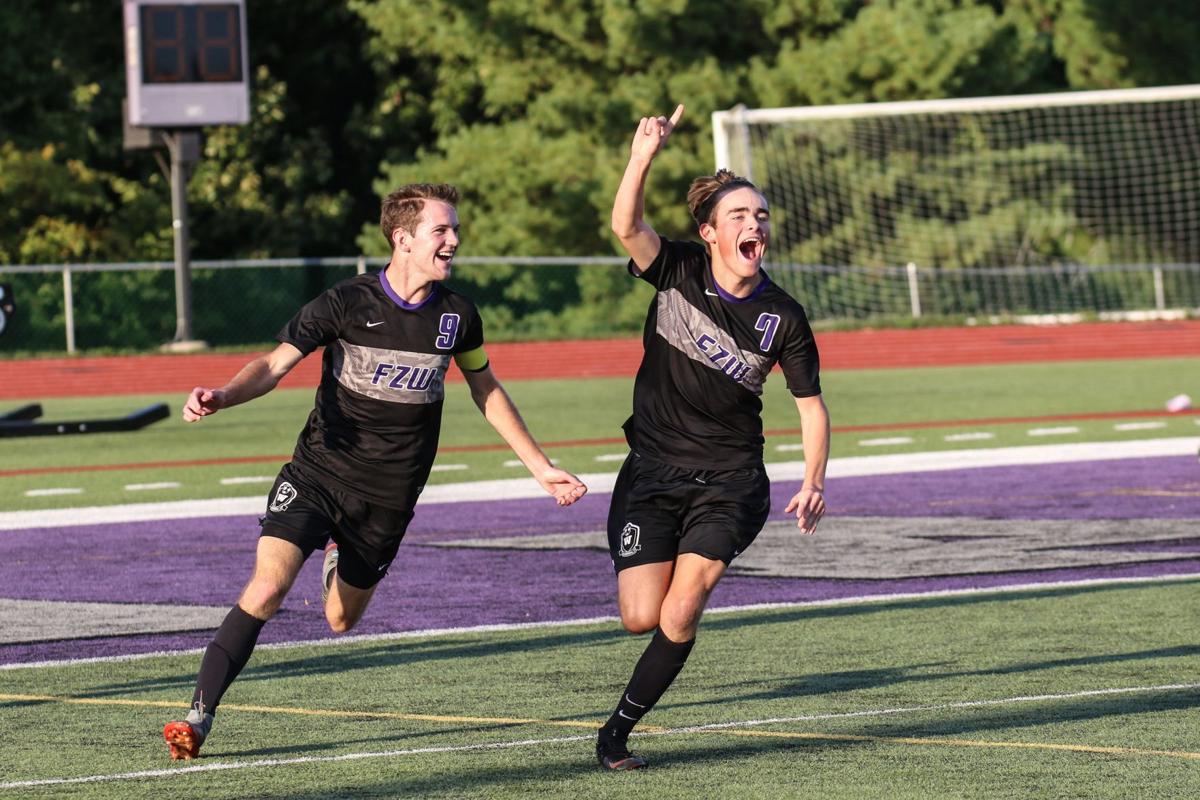 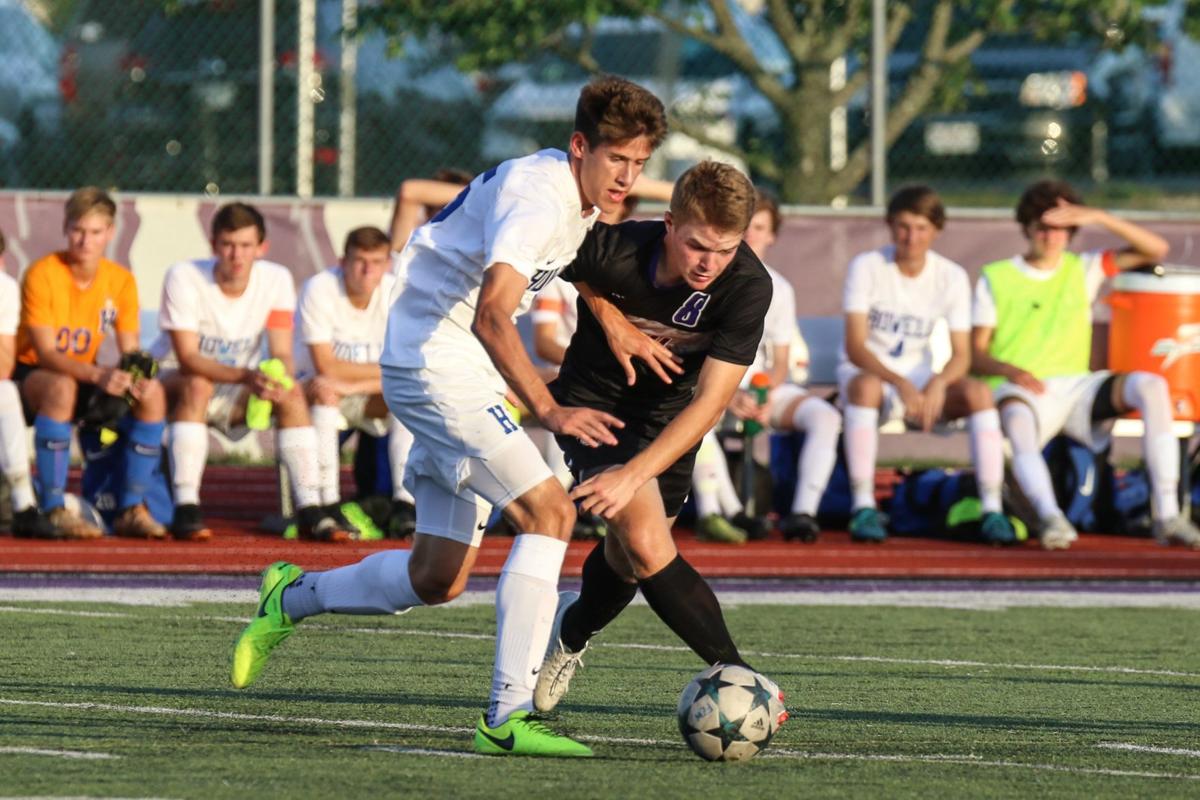 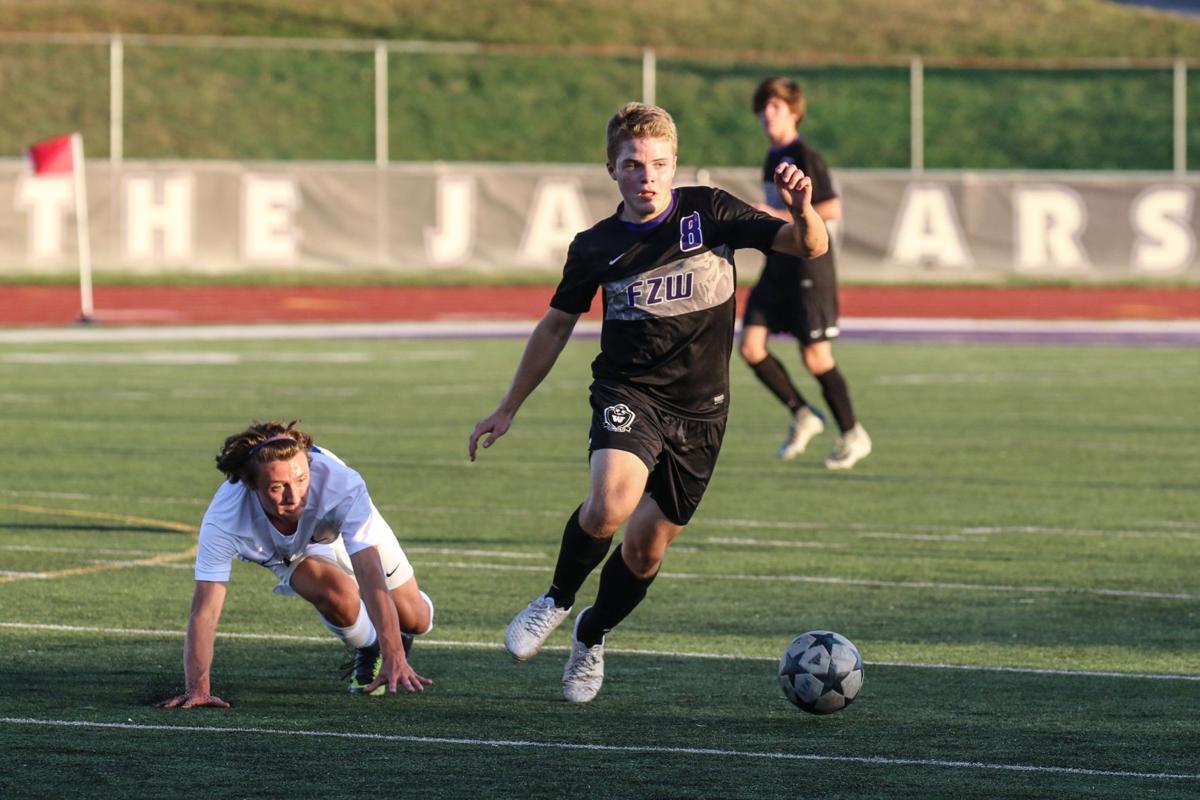 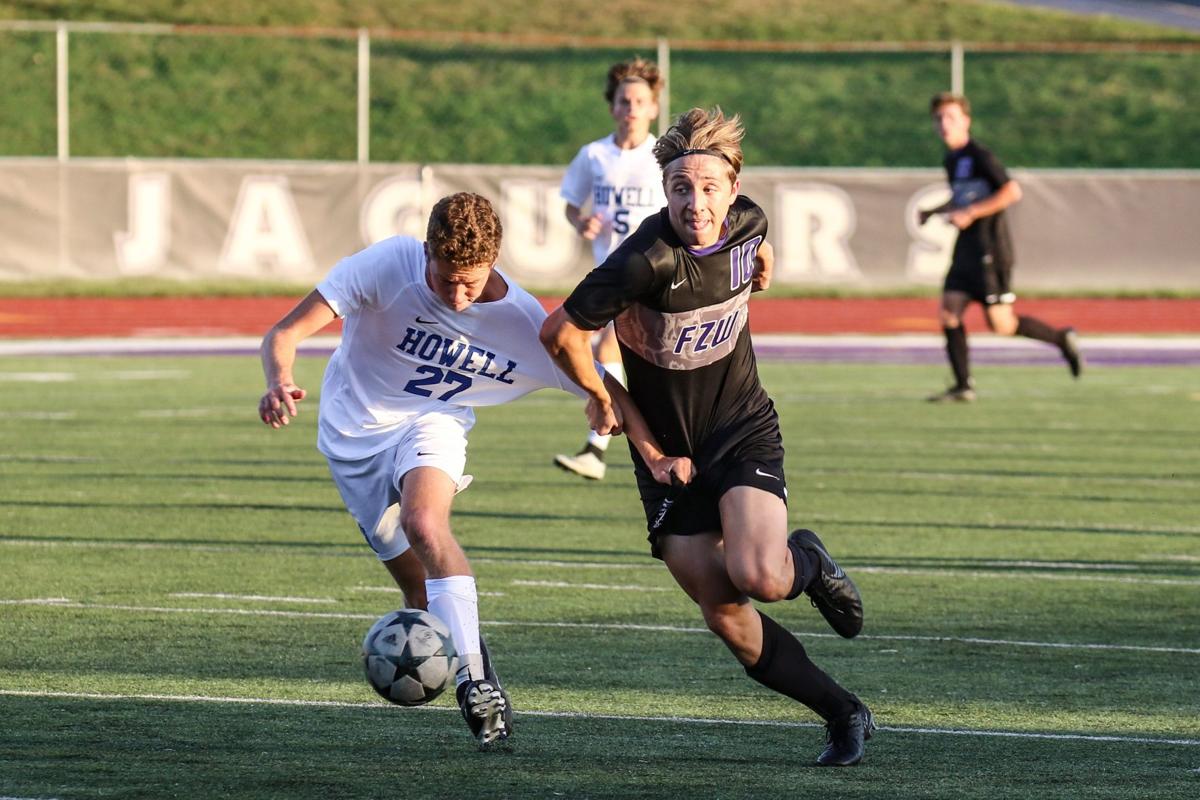 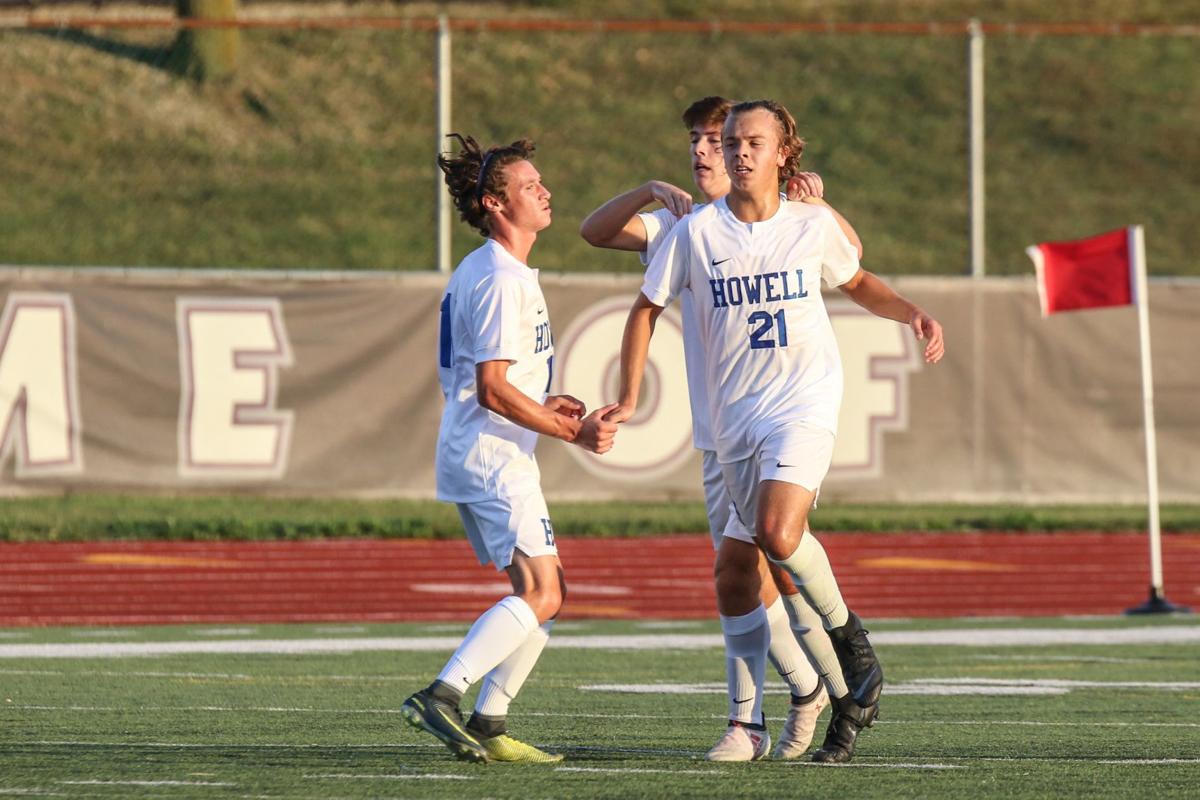 Francis Howell High School junior forward Spencer Ayers (21) is congratulated by teammates for scoring a goal late in the first half during a game Tuesday, October 2, 2018 at Fort Zumwalt West High School in O'Fallon, MO. Darren Dedman, Special to STLhighschoolsports.com 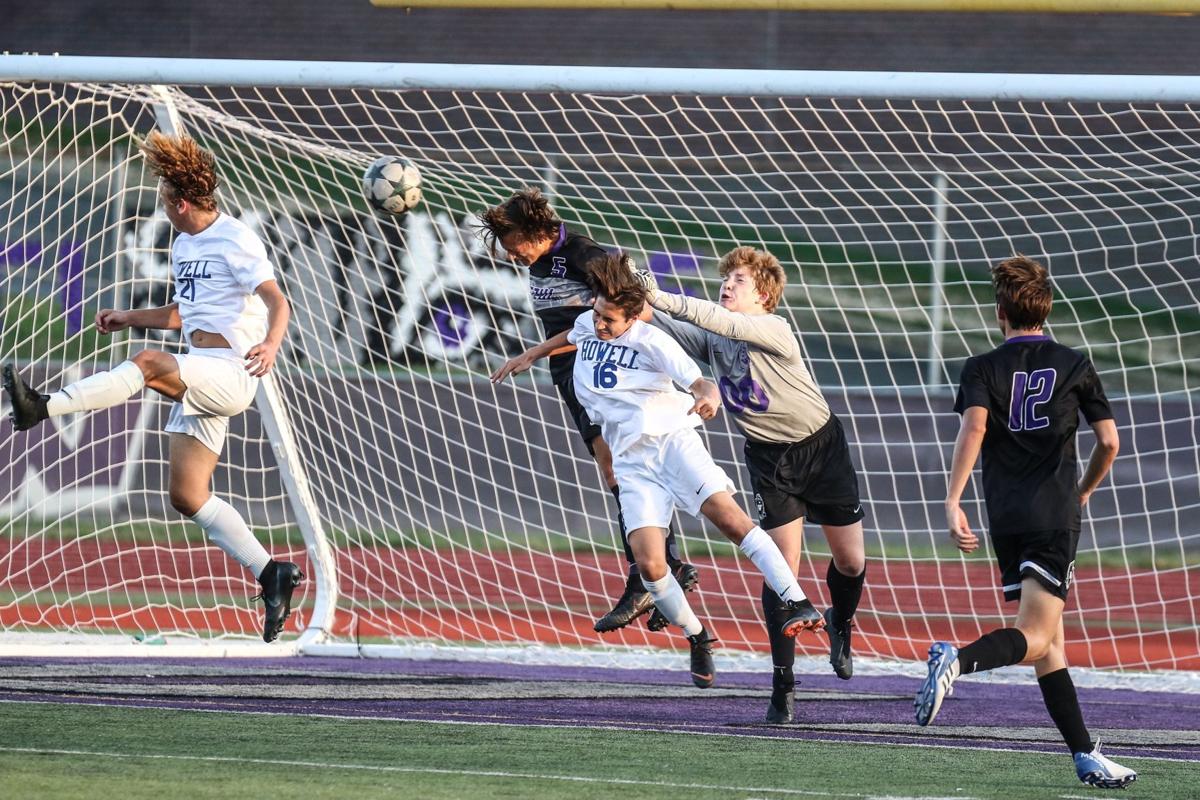 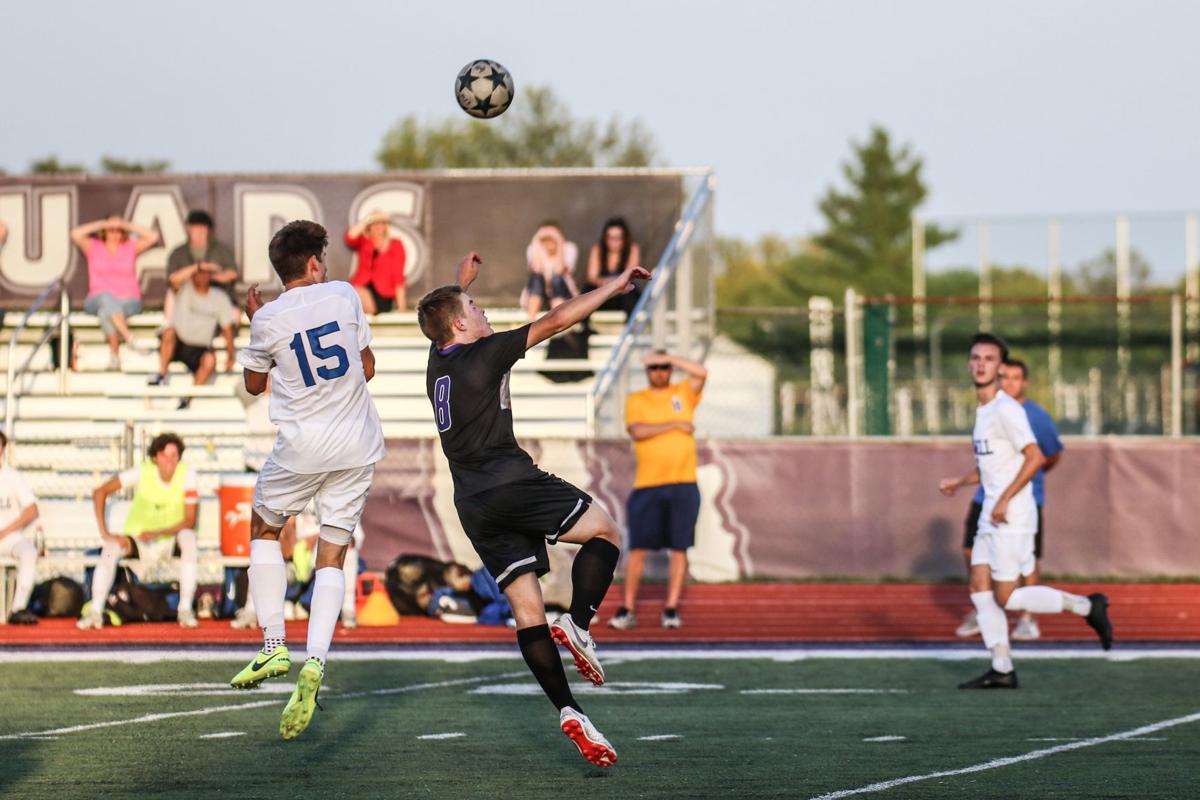 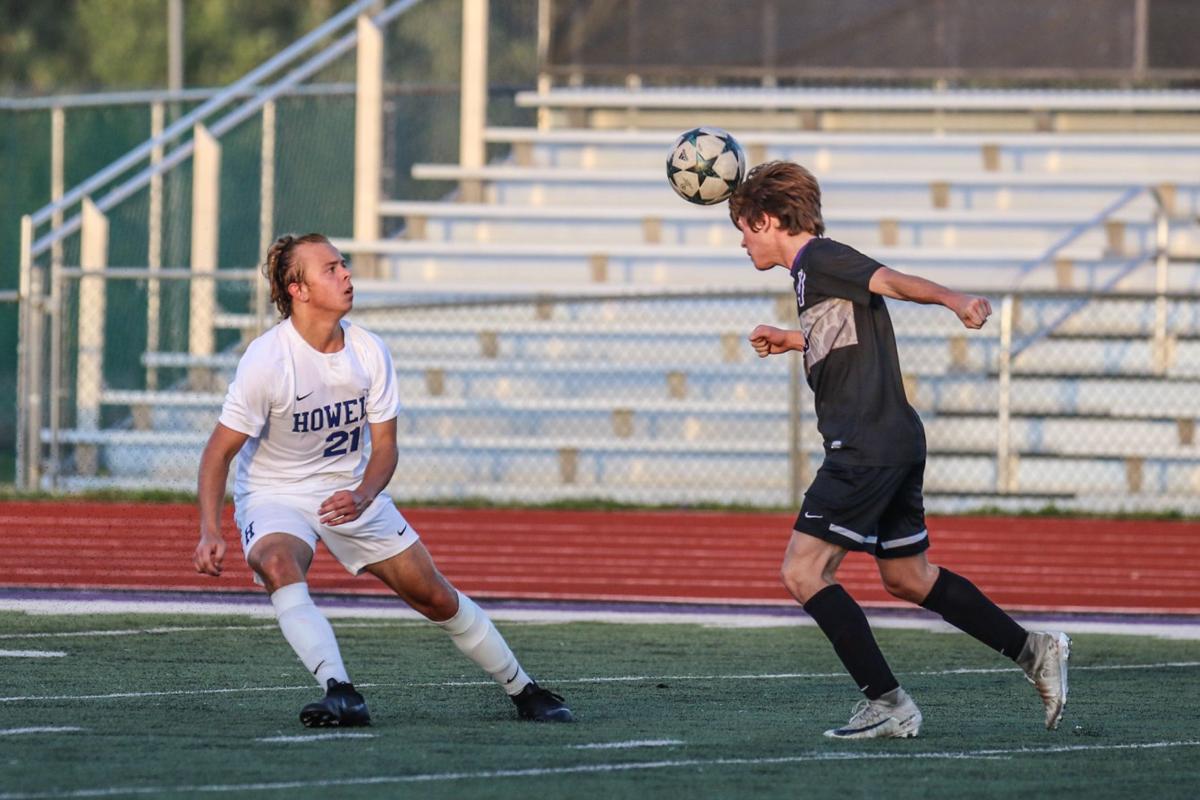 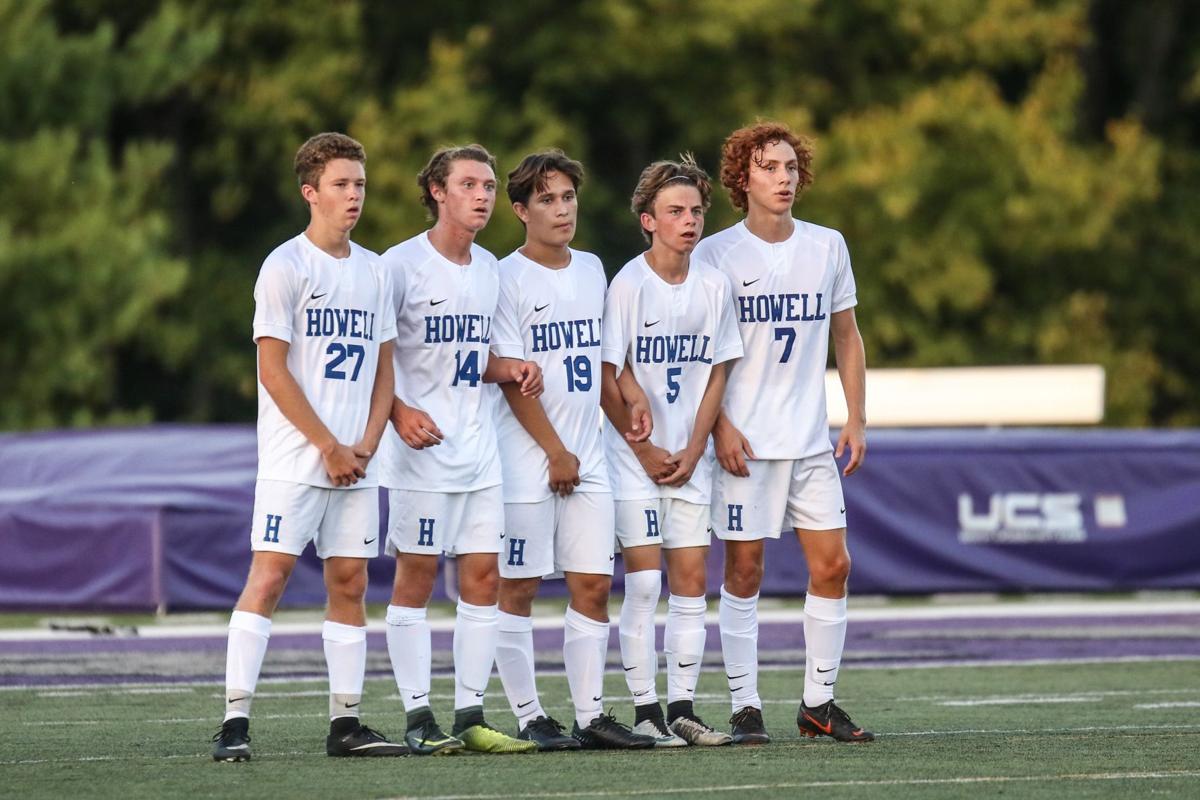 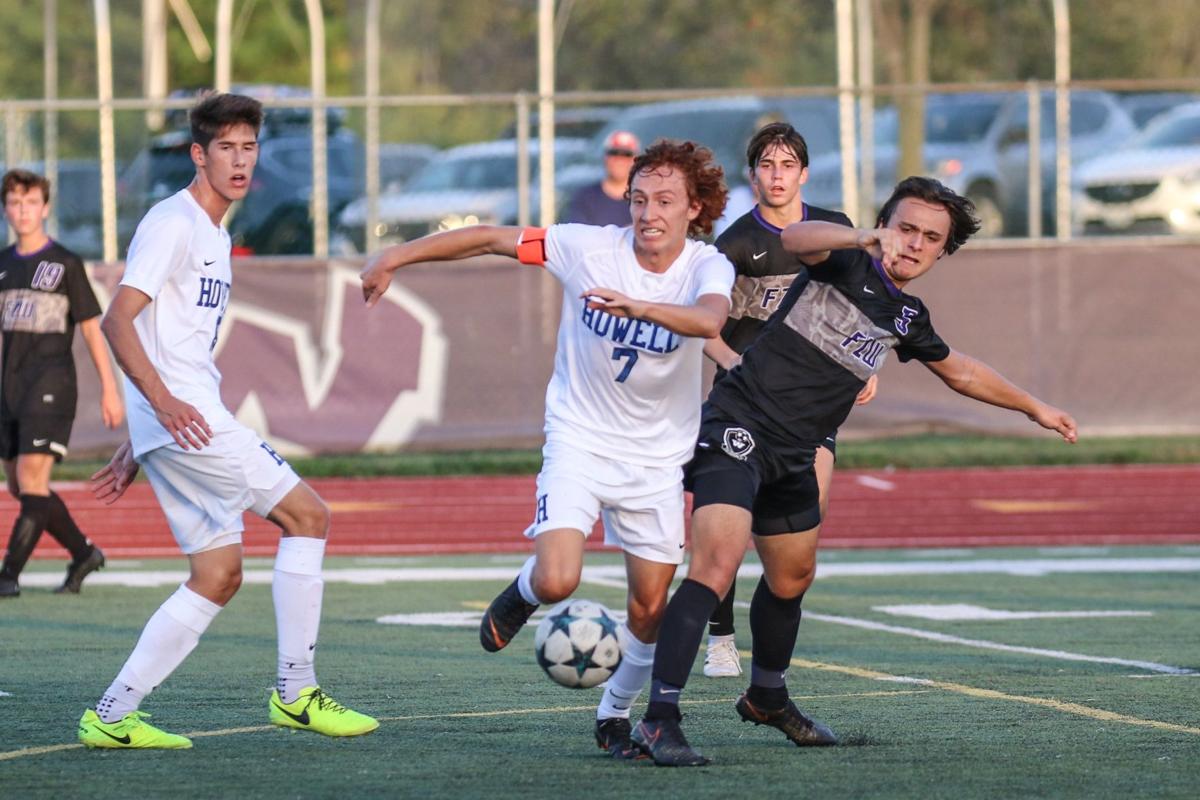 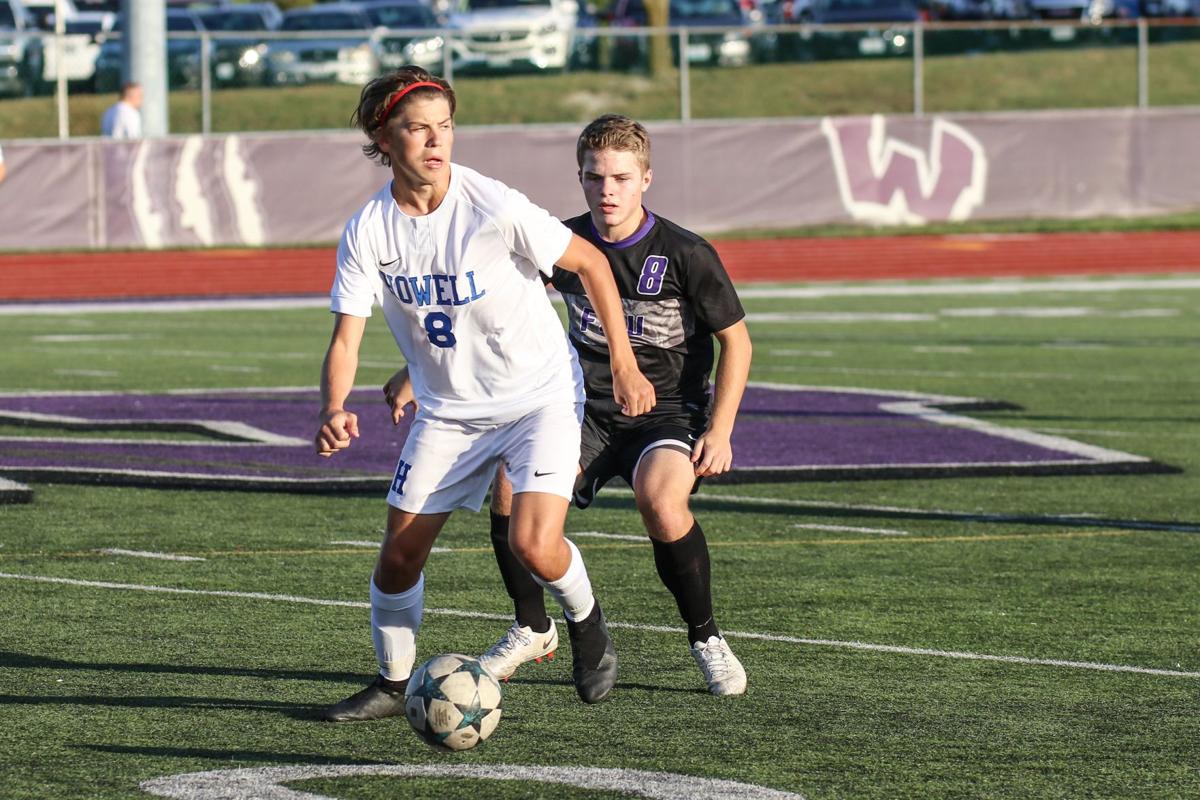 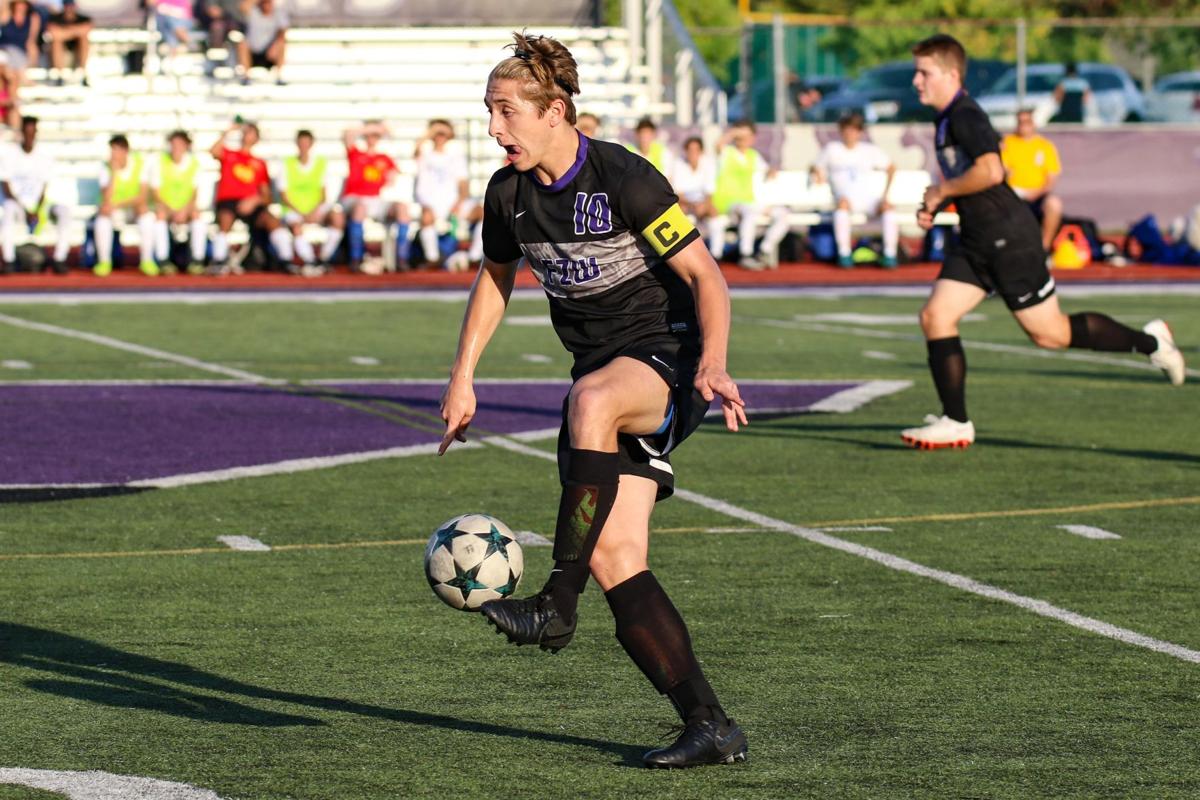 He's not one for guessing, especially on penalties.

It was his keen observation on a penalty by Howell senior forward Tommy Naumann with just over two minutes left which helped preserve the Jaguars' 2-1 victory Tuesday at home.

Rook dove to his left and corralled Naumann's low shot, which was bound for the inside of the post, to put a cap on the win.

“I look at their positioning,” Rook said. “If they're standing there in a position where it's going to be hard to go across their body, I'll go that direction. I know sometimes they'll line up like they're doing it one way and go the other. If I haven't already played against them, I'll go with my gut feeling. He closed (his body) and went with his left, so that's where I went.”

The save made a pair of goals by Fort Zumwalt West (8-8 overall, 3-4 Gateway South) in the game's first 10 minutes stand up.

Fort Zumwalt West started the game as the clear aggressor and nearly had three goals, but one was called back due to an off-sides.

Senior Matt Dubrowski put Fort Zumwalt West up 1-0 and sophomore Alex Hermann followed that up a few minutes later to double the lead as the Jaguars slammed home a pair of headers.

“Howell is a good team and we just came out (with the mindset) that we wanted to beat them,” Hermann said. “We came out with a fire under our butt. We know Howell is a tough team, so we knew we had to play hard from the start.”

With 14 left in the first half, junior Spencer Ayers got one past Rook to cut the lead in half.

Despite constant Howell pressure, that's all the Vikings would get.

Fort Zumwalt West had a golden opportunity to put the game away with 10 minutes left as sophomore Jon Richert fired a shot at the gaping Francis Howell net.

The ball appeared to hit the hand or forearm of a defender, but no call was made much to the chagrin of Francis Howell coach Michael Enright.

“I would say it was a little bit of karma,” Enright said of Rook's save. “I'd say they were unfortunate not to get a PK called down there for them. I guess it was karma and the soccer gods were going to reward that lack of a call down there with (the save). You like your chances when you've got your first team all-conference senior captain up there in the clutch. Things just didn't go our way tonight. It was a microcosm of the game.”

While Rook made the save of the night, Fort Zumwalt West needed each of his six saves to snap Francis Howell's 15-game unbeaten streak dating back to 2016.

“Howell hasn't lost a conference game in over a year and a half,” Fort Zumwalt West coach Brad Fischer said. “They're a fantastic team. They're fast and athletic and skilled at every position. Any time you can get a win over those guys, it's a nice feeling and a nice accomplishment.”

Francis Howell High School junior forward Spencer Ayers (21) is congratulated by teammates for scoring a goal late in the first half during a game Tuesday, October 2, 2018 at Fort Zumwalt West High School in O'Fallon, MO. Darren Dedman, Special to STLhighschoolsports.com