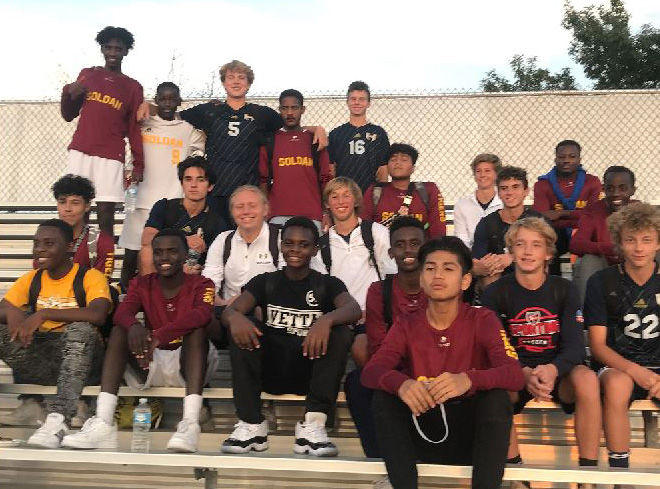 Members of the Holt and Soldan boys soccer teams enjoy a barbecue after Holt's home win over the Tigers on Oct. 4. The programs have developed an interesting history in the past few seasons. Submitted photo 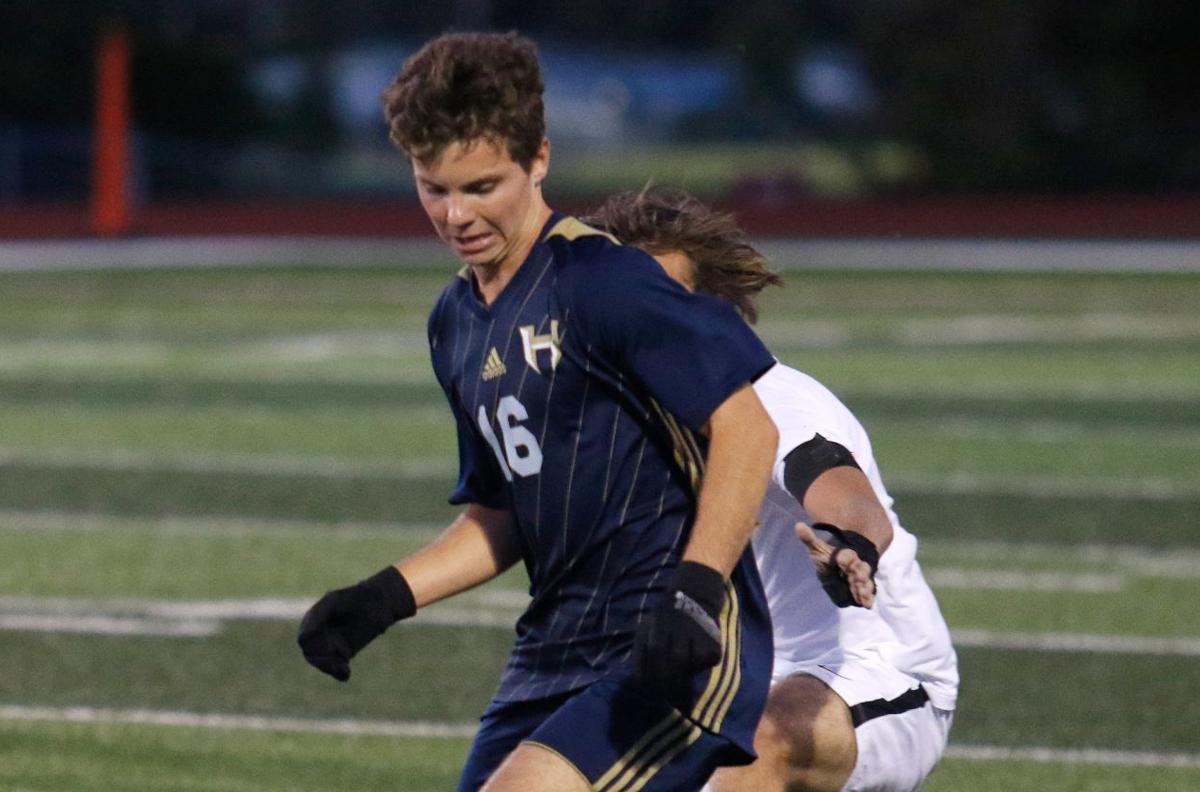 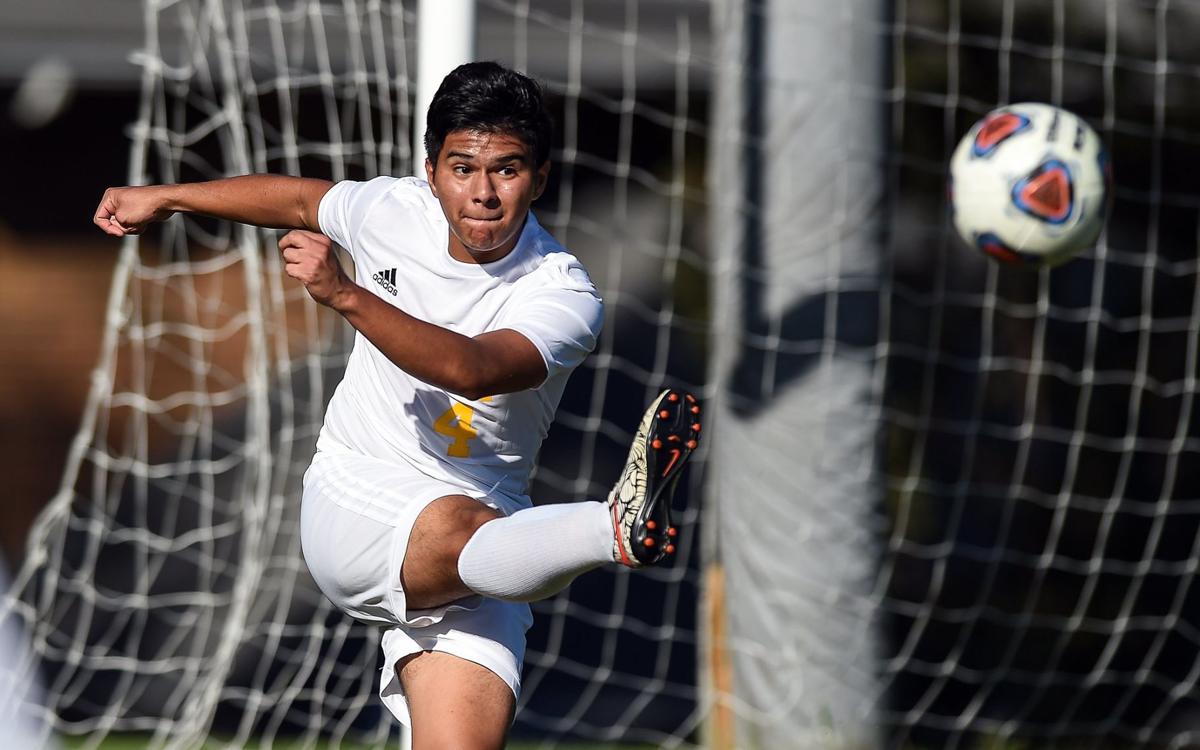 Soldan's Fredy Lopez clears the ball away from the goal during a boys soccer game against Metro on Friday, Sept. 13, 2019, at Soldan High School in St. Louis, Mo. Randy Kemp | Special to STLhighschoolsports.com 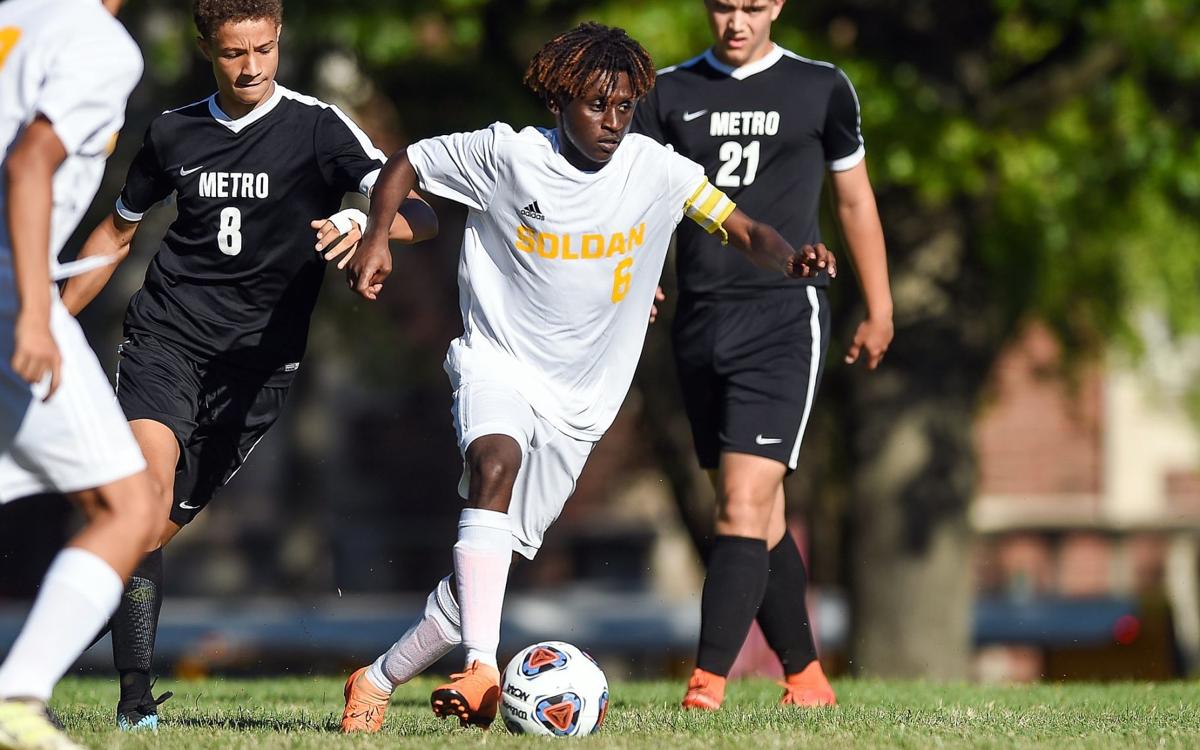 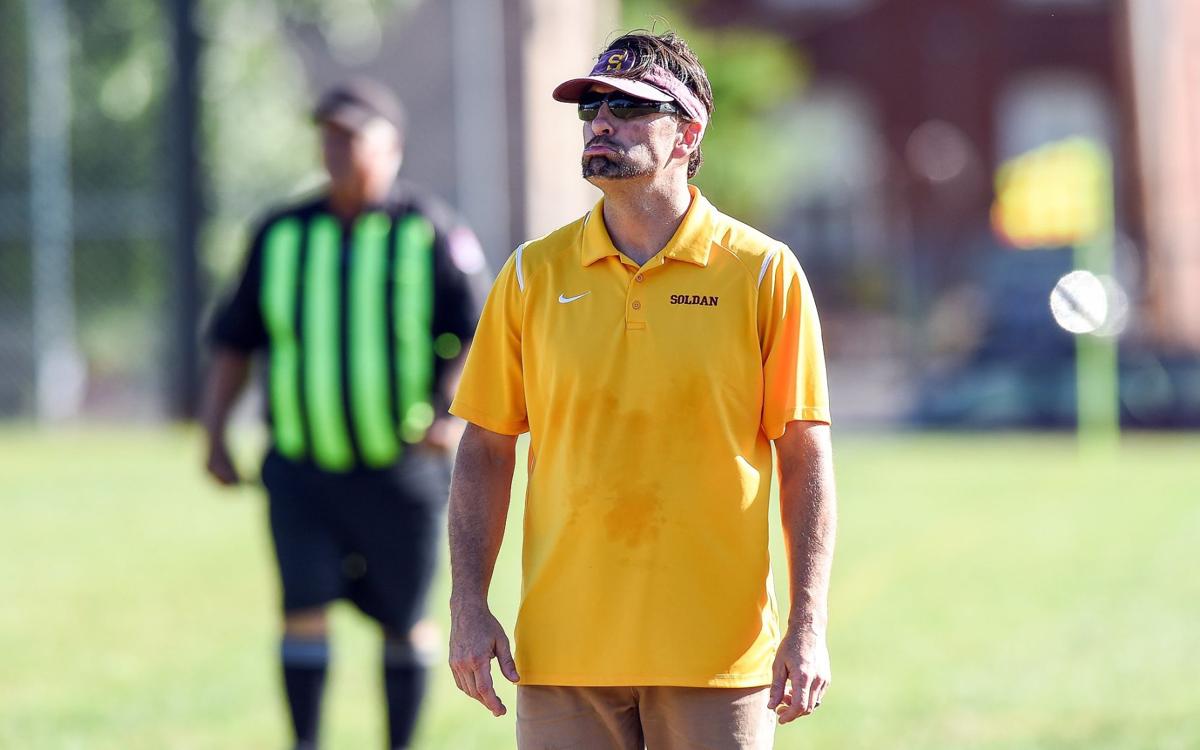 Soldan's coach Jeremy Rensmann on the sideline during a boys soccer game against Metro on Friday, Sept. 13, 2019, at Soldan High School in St. Louis, Mo. Randy Kemp | Special to STLhighschoolsports.com 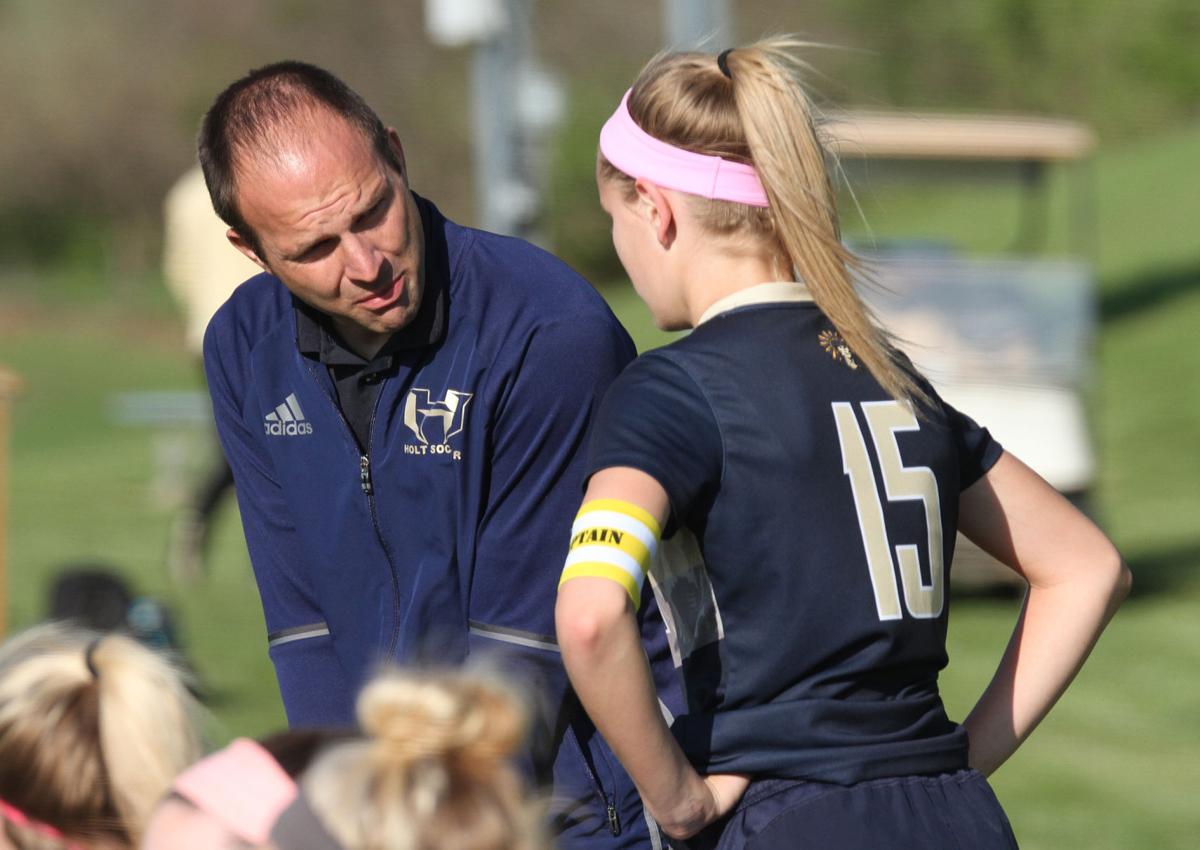 When it comes to soccer — and maybe life in general — there is a huge difference between western St. Charles county and north St. Louis city.

Still, a couple of schools from those areas managed recently to bridge the gap by using soccer as a conduit.

A post-game barbecue in the wake of Holt's 9-1 win over Soldan on Oct. 4 in Wentzville proved to be about much more than just soccer.

Some of Soldan's players said they enjoyed the cross-cultural exchange.

"It was good. We had a lot of fun," said Tigers senior midfielder Adi Seleman, who hails from Eritrea.

"We made new friends," added Soldan senior Fredy Lopez, who is from Honduras.

The event has been a couple of years in the making.

In September 2017, Holt was scheduled to play at Soldan in a nonconference soccer match that coincided with the aftermath of the acquittal of former St. Louis City police officer Jason Stockley and the subsequent civil unrest.

“When the Jason Stockley acquittal had occurred and there were protests occurring in the city of St. Louis, Holt felt a bit uncomfortable about coming into the city," Soldan coach Jeremy Resmann said. "So we arranged transport to go out to Wentzville to play. It was a good game, even though we lost.”

That game fostered a fast friendship between Resmann and Holt coach Greg Schroeder. Eventually, the players within the programs became buddies as well.

Last season, when Holt made the return trek to Soldan, the coaches and players struck a dialogue.

“We played again the next year and they came to us here at Soldan and beat us convincingly,” Resmann said. “However, Greg and I wanted to continue to play each other to increase the exposure of our players to high competition and each others' cultures. Greg and I, and some Holt players, had a long conversation about where my players are from and some of their experiences as refugees in their home country and in the U.S. My players' stories hit a chord with Greg and the Holt players and they took the next step in bringing our players closer together.”

This season, Holt made for gracious hosts.

After the sides played, Holt's booster club hosted a barbecue for both teams. That's when soccer took over and washed away any and all remaining barriers between the sides.

“Greg sent an e-mail early this fall before our match this year about the Holt booster club wanting to sponsor a barbecue for all the players after our match last week on Oct. 4,” Resmann said. “Of course, I agreed that it was a great idea and that we should avoid pork with my Muslim players.

“We lost by a wide margin during our match, which was not helped by having three key players out due to injury,” Resmann continued. “However, the booster club had the barbecue ready for us immediately after the game. After the players were able to get their food, the Holt and Soldan players began to eat separately until we moved everyone toward the bleachers. Then, they began to talk about soccer, their respective countries and music. I was actually a bit surprised how well they connected with each other. I literally had to pull my players from the stands with their new-found friends in order to get them on the bus to get home at a reasonable hour.”

“Hosting the game against Soldan at our school was an honor,” Garofalo said. “We may not all come from the same backgrounds, but the game of soccer brought us together. It was truly a unique experience to get to know some of the kids after the game. When talking to some of them, I realized they have the same dreams of going to college to allow them to do what they love for a living.”

Schroeder said the experience has been eye-opening.

“For me, the best part of the barbecue was how easily the two teams mixed,” Schroeder said. “Once everyone had food, they started talking about the game, season and eventually everything else. It's always good to remind yourself why we coach. Wins are nice, if not for any other reason than to help young people grow in their love of the game and as people. I think we were able to do both with this activity.”

Resmann said the bonds created between the teams will last a lifetime.

“There is a huge gap in distance, culture and life experience between Holt players and Soldan players,” he said. “But soccer and shared experiences help bridge that gap at least a little bit.”

Soldan sophomore Isaac Assante, who originally is from Uganda, said he hopes this is a tradition that will continue between his team and Holt.

"We want to meet up again to play and eat," Assante said.

Members of the Holt and Soldan boys soccer teams enjoy a barbecue after Holt's home win over the Tigers on Oct. 4. The programs have developed an interesting history in the past few seasons. Submitted photo

Soldan's Fredy Lopez clears the ball away from the goal during a boys soccer game against Metro on Friday, Sept. 13, 2019, at Soldan High School in St. Louis, Mo. Randy Kemp | Special to STLhighschoolsports.com

Soldan's coach Jeremy Rensmann on the sideline during a boys soccer game against Metro on Friday, Sept. 13, 2019, at Soldan High School in St. Louis, Mo. Randy Kemp | Special to STLhighschoolsports.com