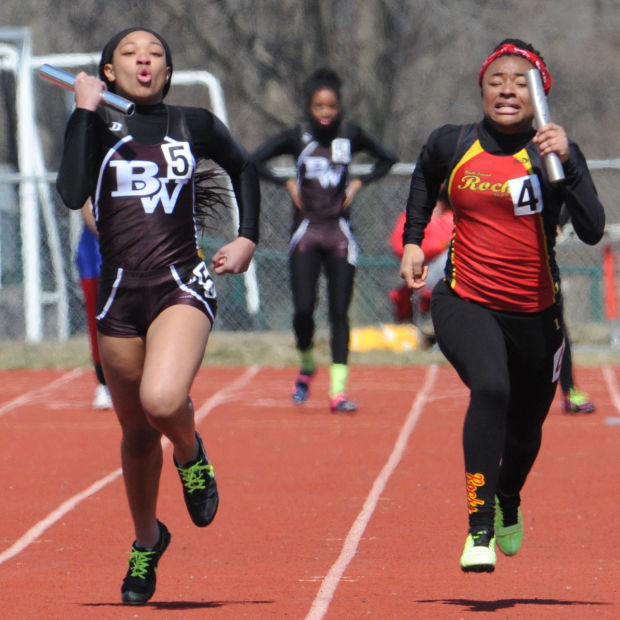 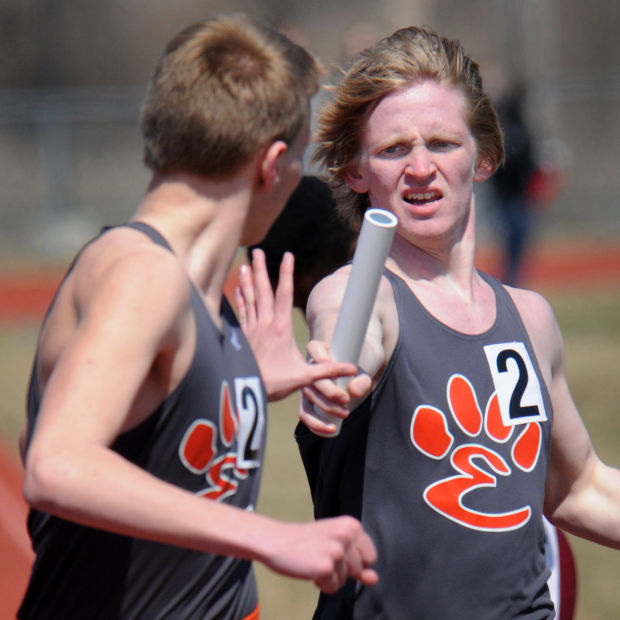 James Mayfield (right) of Edwardsville finishes his leg of the 3,200-meter relay and hands off the baton to the final runner, Brydon Groves-Scott, during the Southwestern Illinois Relays on Saturday, March 23, 2013 at the Winston Brown Track & Field Complex at Edwardsville High School in Edwardsville, Ill. John Swistak Jr., STLhighschoolsports.com

EDWARDSVILLE • Some prominent names were missing, but the Southwestern Illinois Relays provided an early indication there is still plenty of track and field talent in the Metro East.

Belleville West had 116 points to win the girls portion of the meet Saturday at Edwardsville, while Rock Island was second with 103 and Edwardsville was third with 95. Last year, Edwardsville won the Class 3A state meet with West finishing second.

In the boys meet, another Southwestern Conference school, O'Fallon, took first place with 144 points, while Edwardsville had 108. Edwardsville was the Class 3A runner-up at state in 2012.

Several of the top athletes from nearly every school were not at the meet, as they were competing in the unofficial indoor state meet, the Top Times Classic at Illinois Wesleyan University in Bloomington.

O'Fallon senior Chris Wiggins was a double-winner in the boys meet, placing first in the high jump (6 feet, 2 inches) and the 100-meter dash (11.09 seconds). The other individual winner for the Panthers was Damon Boone in the 300-hurdles (40.51).

"We've put together a team that can be a conference and a sectional contender, and we have some events where we can score in the state meet," O'Fallon coah Ron Koch said. "I know (Belleville West coach) Patton Segraves says we're a trophy contender, but we only scored three points at the state meet last year, so I won't go there yet."

The Panthers were without their top distance runners, as Alex Riba is out with an Achilles' tendon injury, while Patrick Perrier ran Friday in the Florida State Relays, a national-caliber invitational meet. Pole vaulters Jack Klopfenstein and Patrick Riley were at the Top Times Classic.

"We lucked out with the weather and the kids competed, so it's nice to get outdoors," Edwardsville coach Chad Lakatos said. "Julian Harvey went to indoor state, so we lost quality points in the high jump and long jump.

"We've got some good young kids and a few kids that trickled over from last year. We've got a lot of work to do, but we can get a good idea of what the other conference schools are doing."

Rounding out the top five in the boys standings were Rock Island (75), Rockwood Summit (69) and Belleville West (64).

The lone winner for Summit was Adrian Sanders in the triple jump (42-10). First-place finishers for West were Pierre Gee-Tucker in the discus (159-11) and Taron Johnson in the shot put (48-9).

"It's the first (major) outdoor meet of the season and a fun day for the kids," West coach Paul James said. "Edwardsville had some kids missing today, so obviously they would have been knocking on the door and possibly could have won it.

"A relay meet is a little different scoring than a regular meet, but I'm proud of the kids. I'm pleased with where we're at, but we want to be running our best at the end of the season when it really counts."

Nobody knows that better than Edwardsville, which won a state title after not winning the conference meet or the sectional. On Saturday, the Tigers were without shot putters/discus throwers Emmonnie Henderson (a combined five-time state champion) and Aaliyah Covington and pole vaulter Kennedy Roderick, who were all at the indoor state meet.

Still, Edwardsville got first-place finishes from Lauren White in the high jump (5-2) and the long jump (17-7 3/4). White also placed second in the 300 hurdles.

"It was a great showing and the weather held up for us and the sun is shining," said Edwardsville coach MiKala Thompkins, who didn't lose a single point producer from last year's state meet. "We had some great things happen today, but we also discovered some areas we definitely need to work on.

"Not having those three girls today, we were looking at about 44 points on the back end. The other girls knew it coming into this week and those three are a huge part of the team, but we wanted to show that we can do our best to score points as well."

Thompkins looks forward to another year of rivalry with West.

"We only make each other stronger and better," Thompkins said. "It definitely makes track fun."

Placing fourth through sixth in the girls standings were O'Fallon (91), Cahokia (63) and Belleville East (60).

The lone winner for East was Anna Gailius in the pole vault (10-9).

James Mayfield (right) of Edwardsville finishes his leg of the 3,200-meter relay and hands off the baton to the final runner, Brydon Groves-Scott, during the Southwestern Illinois Relays on Saturday, March 23, 2013 at the Winston Brown Track & Field Complex at Edwardsville High School in Edwardsville, Ill. John Swistak Jr., STLhighschoolsports.com