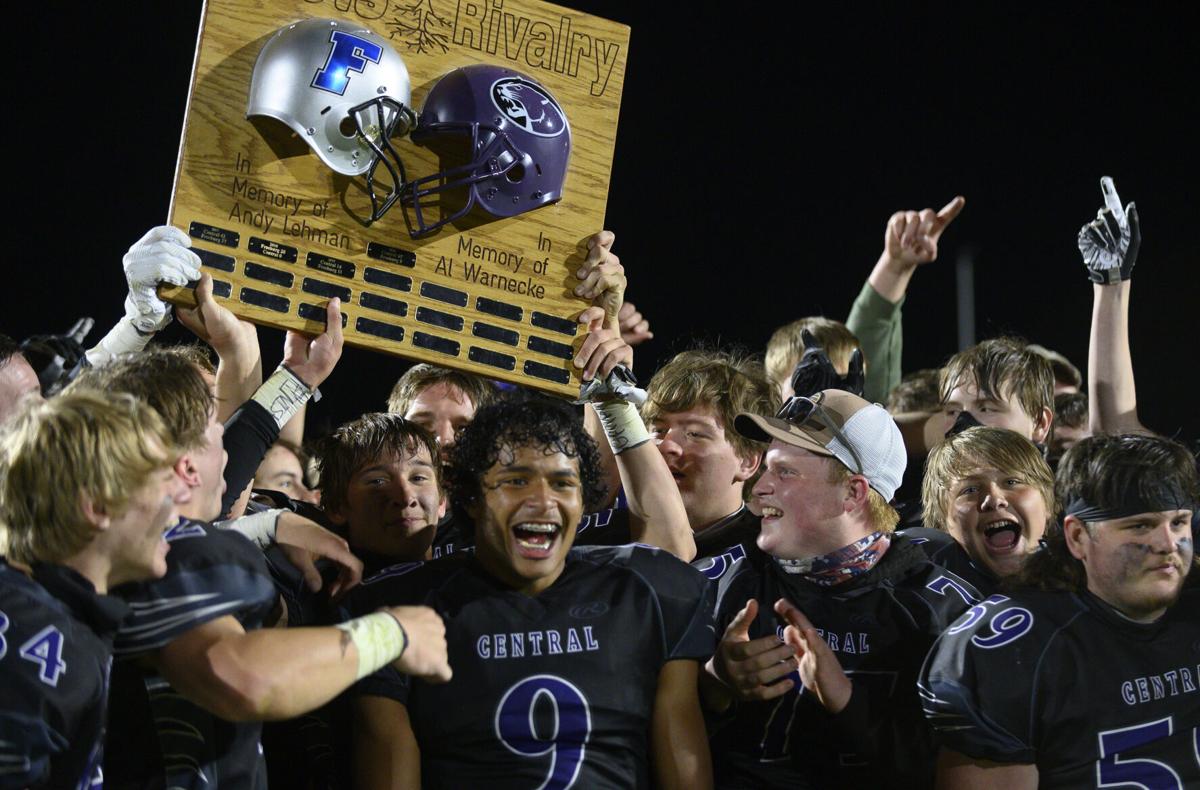 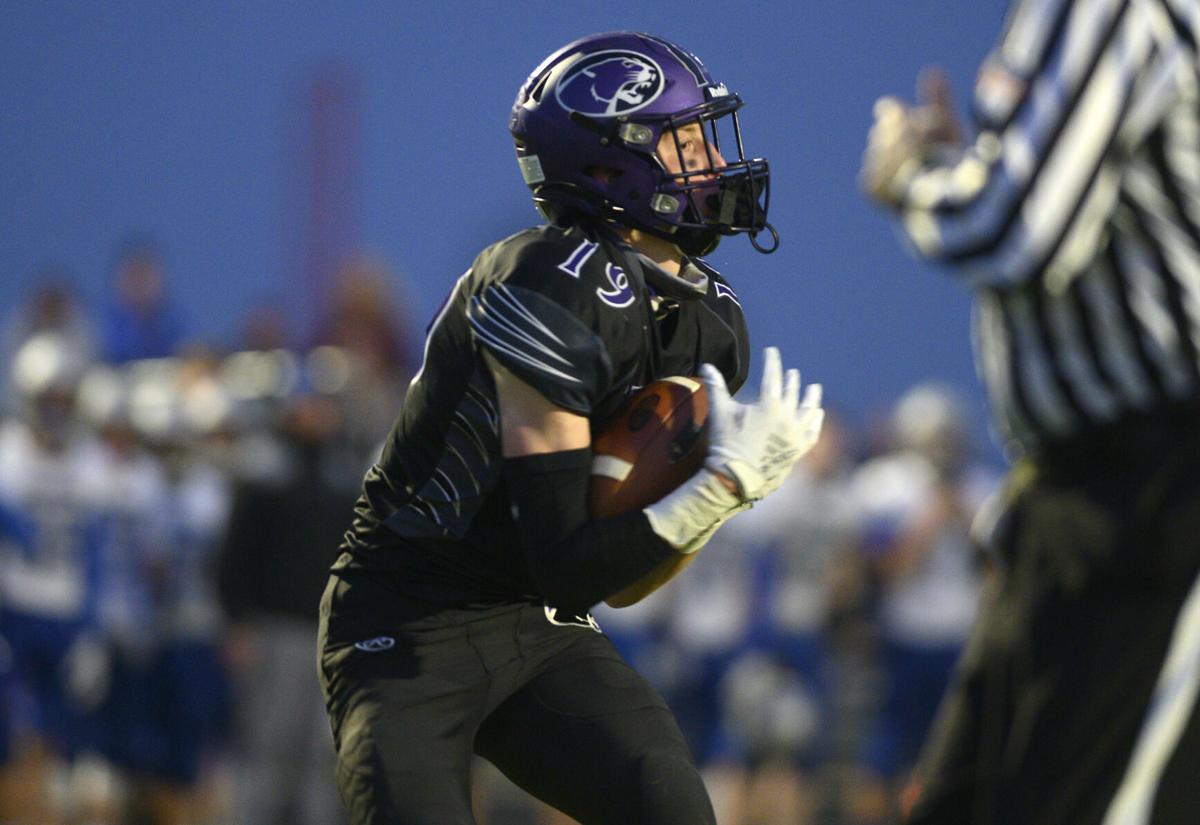 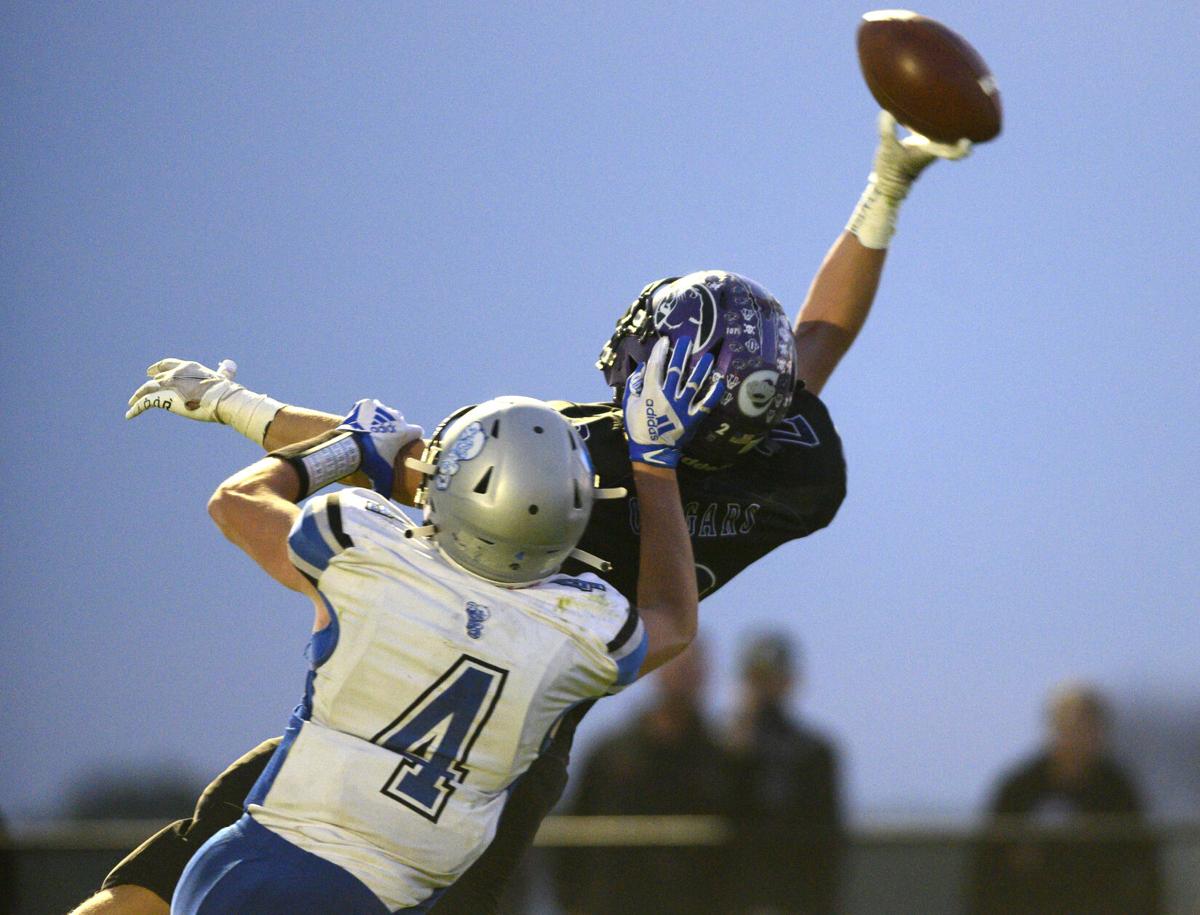 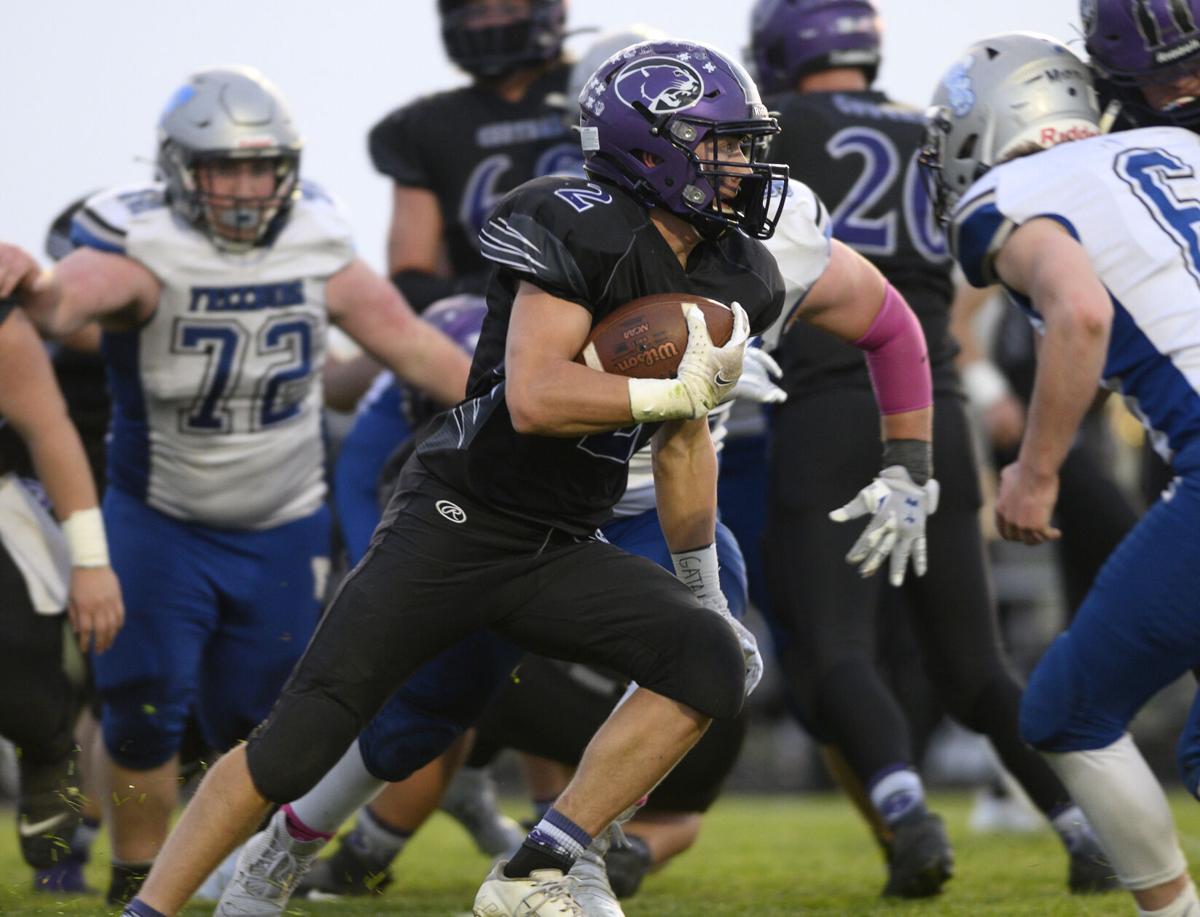 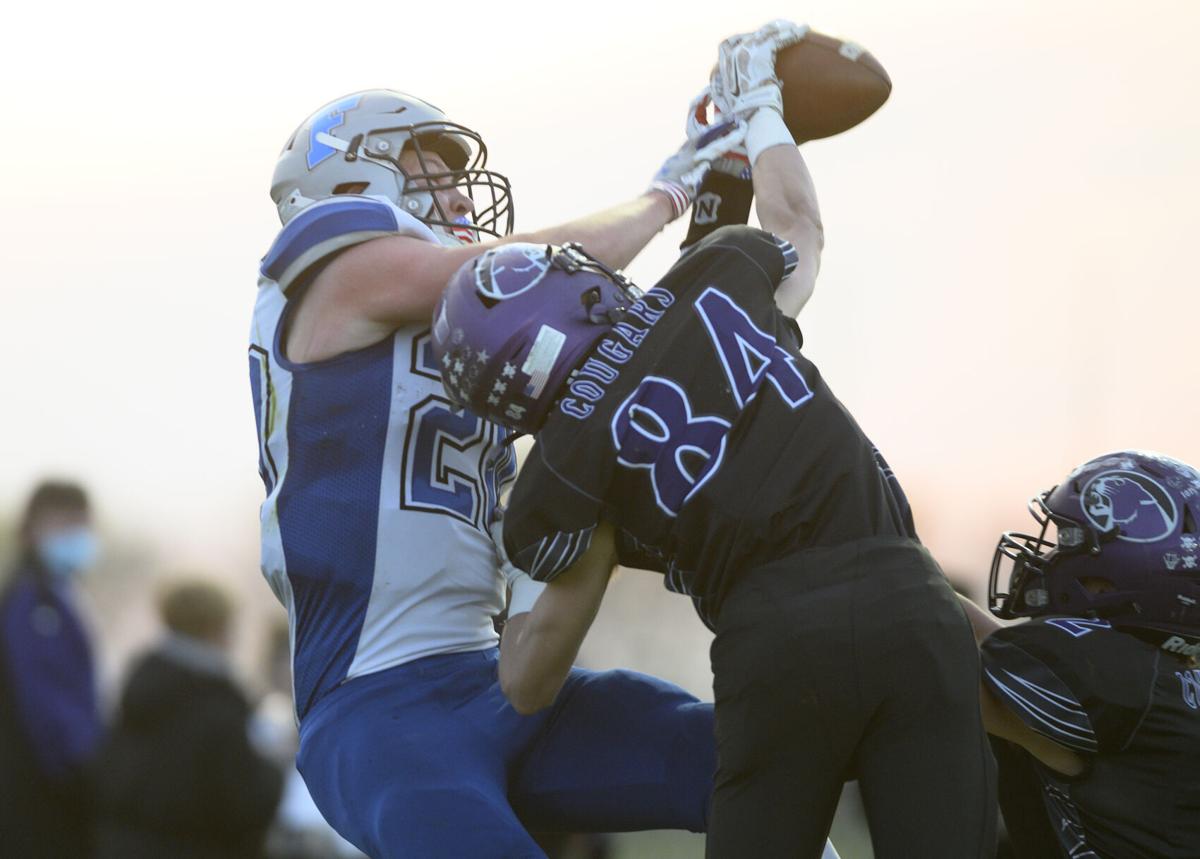 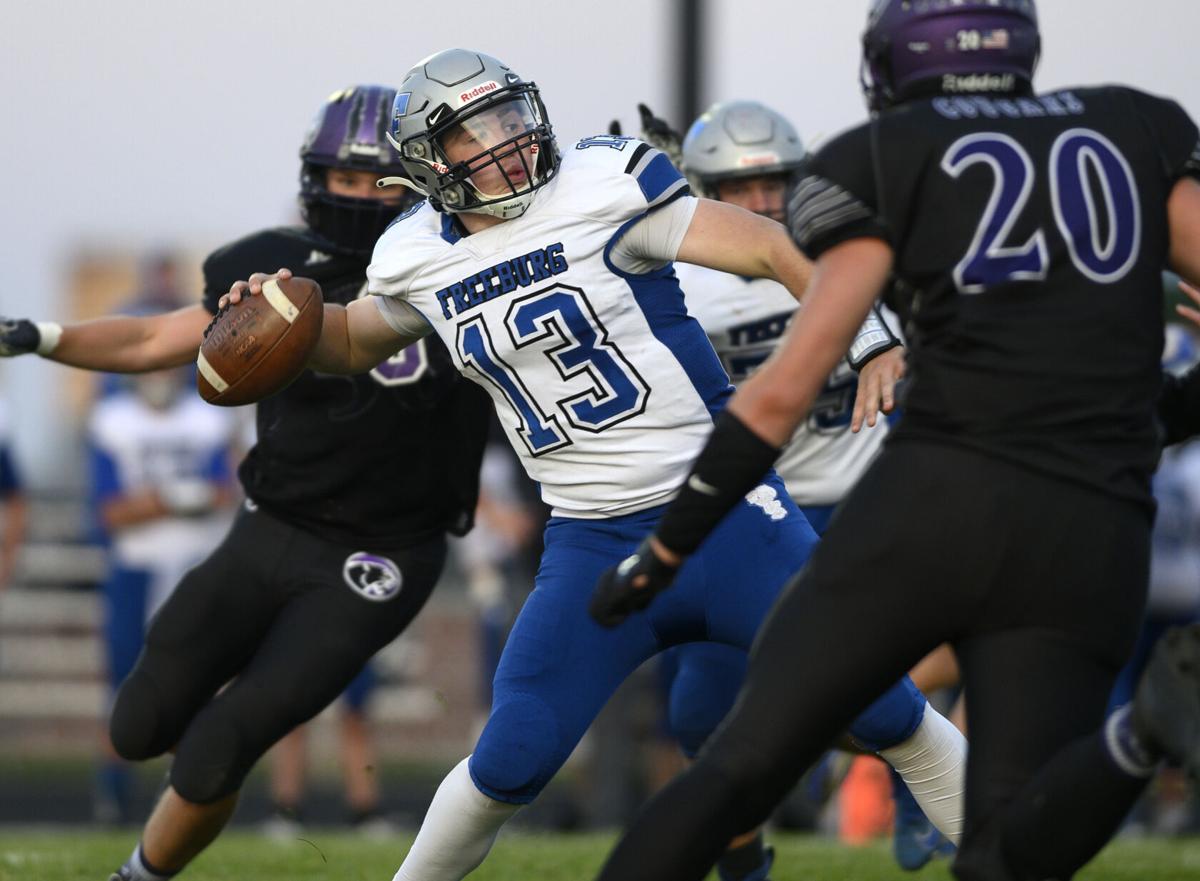 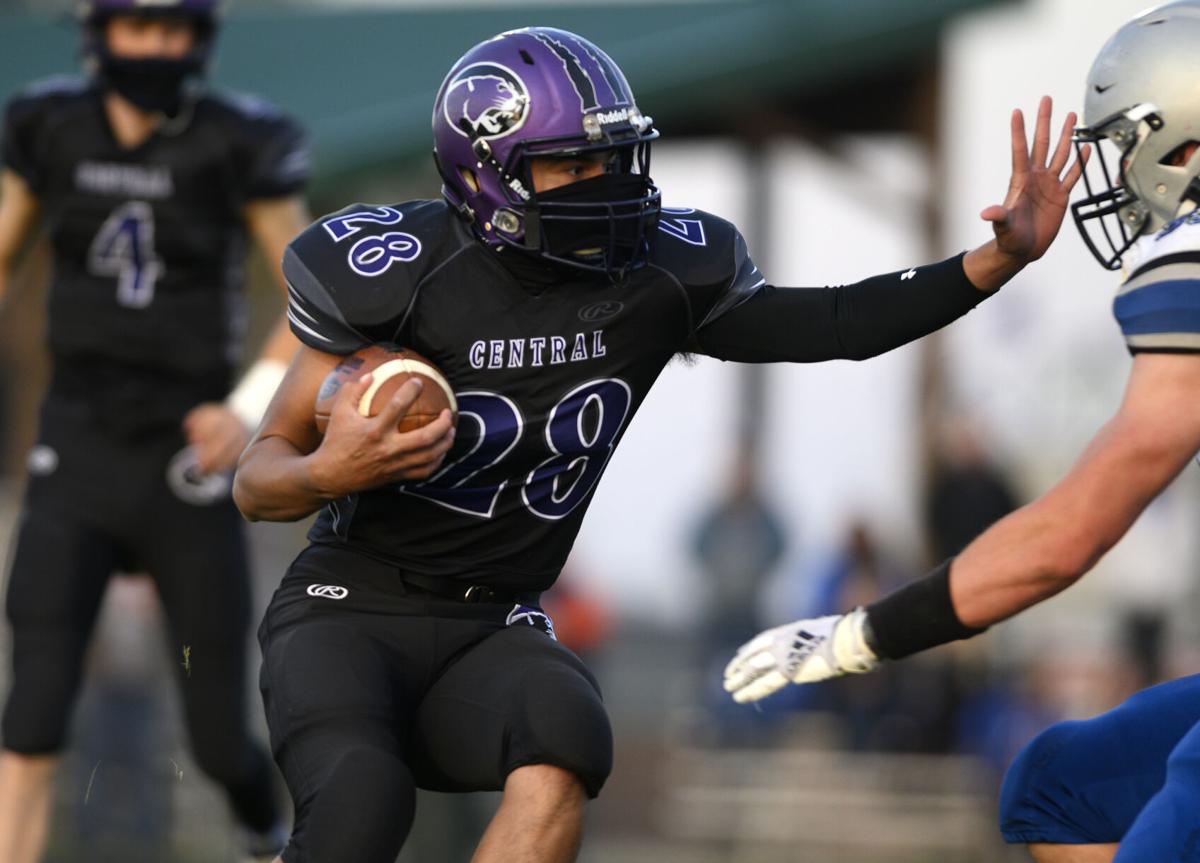 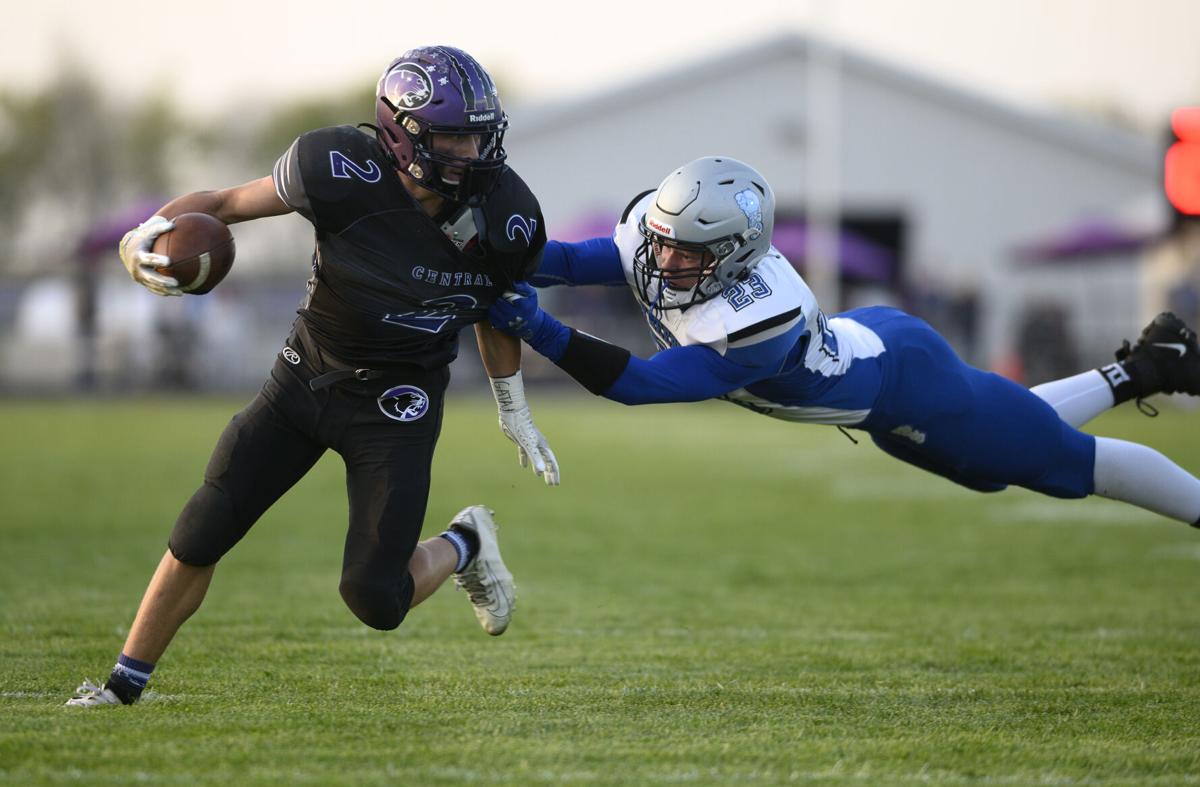 Breese Central's Shane Becker (2) runs with the ball as Freeburg's Jacob Blomenkamp (23) attempts to bring him down during a football game on Thursday, April 22, 2021 at Breese Central High School in Breese, Ill. Paul Halfacre, STLhighschoolsports.com

BREESE — Shane Becker had tears welling up in his eyes as he walked over to the Gatorade container.

The Breese Central senior had waited four years to give his coach a Gatorade shower and he wasn't going to miss his chance.

"He deserves it," Becker said. "He's a great coach and we couldn't ask for anyone better. I love him to death."

It was chilly, wet and a surprise.

But it was the best surprise coach Brian Short could have asked for as Breese Central knocked off Freeburg 35-13 on Thursday night at Breese Central High School to wrap up the shortened spring football season.

"Every ounce of adversity going back to August, we don't know when we're playing or what we're doing," Short said. "You see our guys hang in there and respond and come out these six weeks the way we did. I couldn't ask for anything more from them. I love these guys."

Breese Central (5-1 overall, 3-1 Cahokia) picked up its eighth win over Freeburg in the last 10 meetings.

The Cougars and Freeburg (4-2, 2-2) originally were scheduled to play Friday but moved up the date because of forecasted inclement weather.

Becker led the charge for the Cougars with 144 total yards of offense and a receiving touchdown in the second half, but it was his 83-yard touchdown return in the third quarter on a kickoff all but sealed the deal for Breese Central.

"We love running reverse and just like he did to start the season, he comes out and set s the tone for the rest of the half," Short said.

Freeburg had just cut the lead to 14-7 midway through the third quarter before Becker took the reverse and housed it to push the Cougars lead to 21-7.

But despite that, it was a touchdown scored by senior Quinn Menkhaus late in the fourth quarter that was Becker's favorite moment.

"We've been best friends since Day 1," Becker said. "I wanted to see that happen so badly. He's meant the world to me."

Menkhaus scored his first career touchdown on an eight-yard touchdown sprint late in the fourth quarter to put the Cougars up 35-7.

"It was wide open," Menkhaus said. "I pretty much walked right in there."

Seeing Menkhaus take it to the house on the final offensive play of the season is something that Short won't soon forget.

"That's what it's all about. Quinn is a guy who's hung with these guys forever and he shows up with minimal reward as far as playing time and he comes to battle every day," Short said. "We love him to death. To watch him score at the end, it's pure bliss."

Senior Lucas Stone carried the rock 21 times for 84 yards for the Midgets.

Freeburg scored a touchdown as time expired to put the final touches on a season that was cut short due to the coronavirus.

But coach Ronnie Stuart was grateful for the six games he had with this senior class.

"To be out here and be able to do this tonight, it doesn't matter what the scoreboard says," Stuart said. "To get the opportunity to get six games with this group, it's been a blessing. Great group and I'm going to miss them."

"I try not to think about (what could have been) and think about being blessed that I got six weeks with them," Short said.

Breese Central's Shane Becker (2) runs with the ball as Freeburg's Jacob Blomenkamp (23) attempts to bring him down during a football game on Thursday, April 22, 2021 at Breese Central High School in Breese, Ill. Paul Halfacre, STLhighschoolsports.com