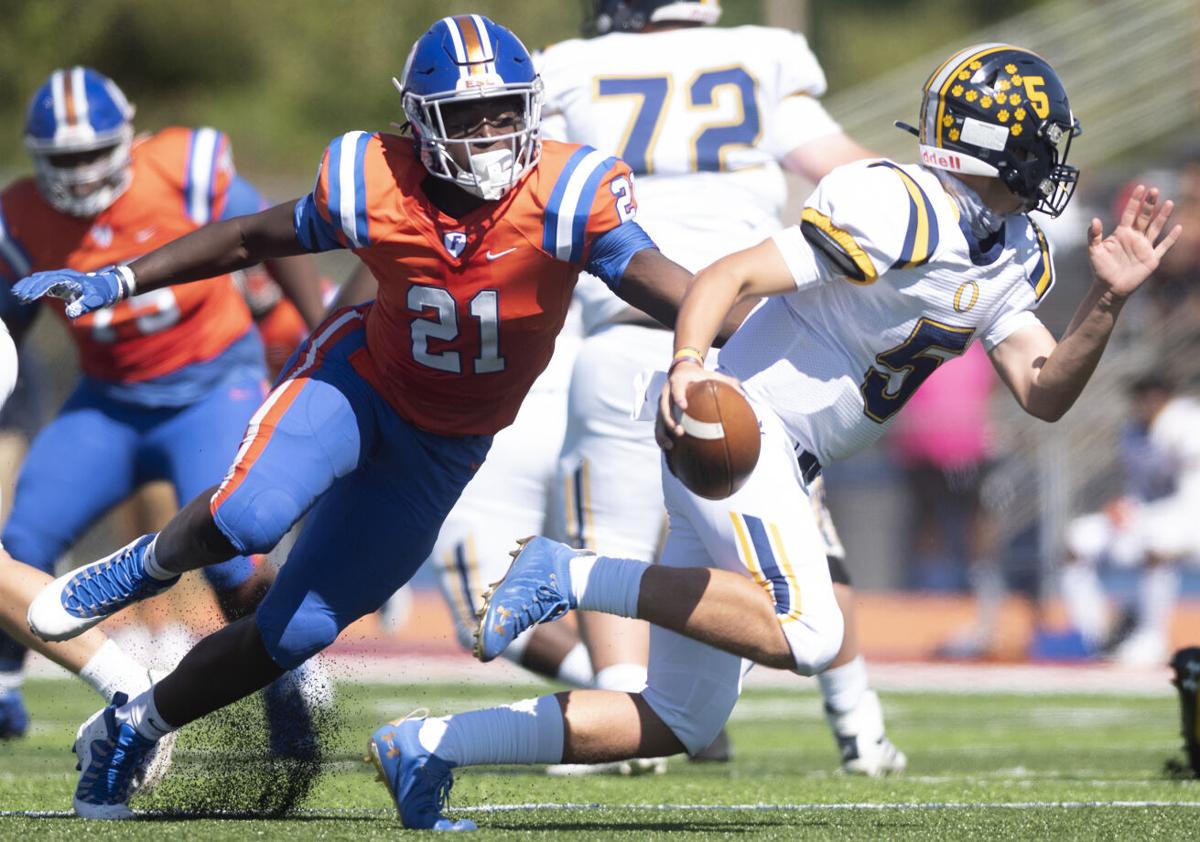 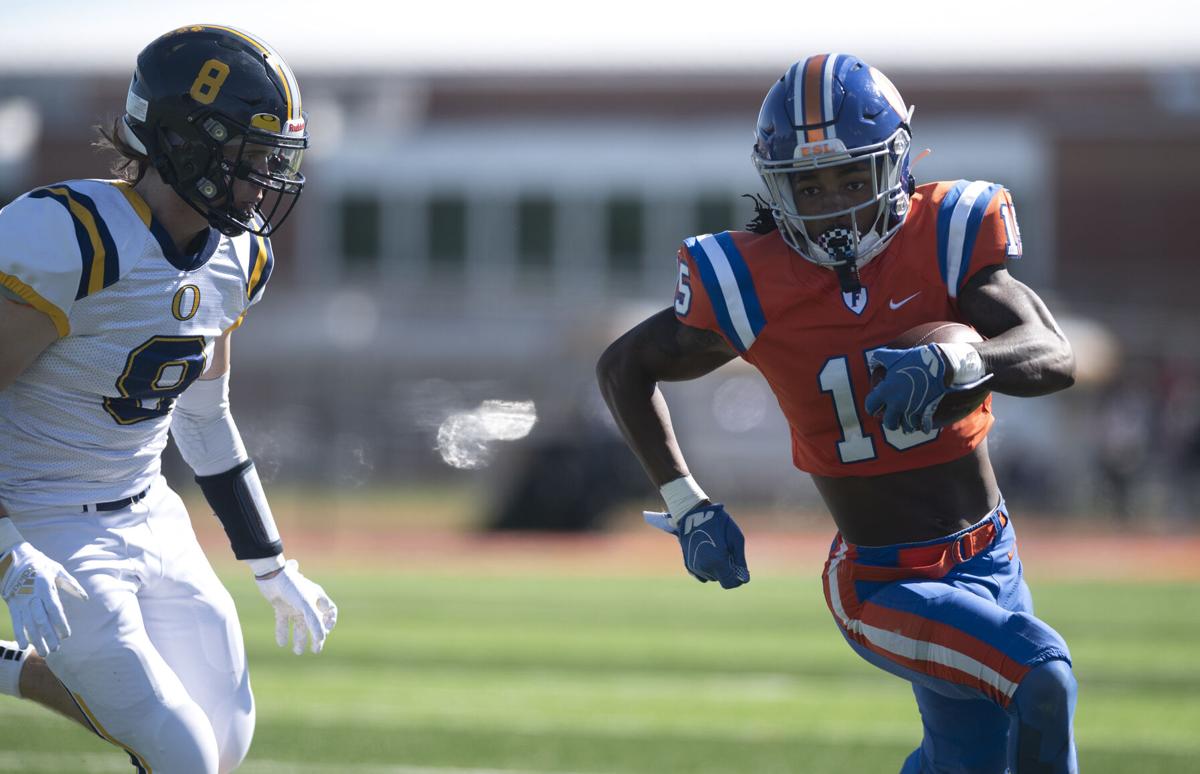 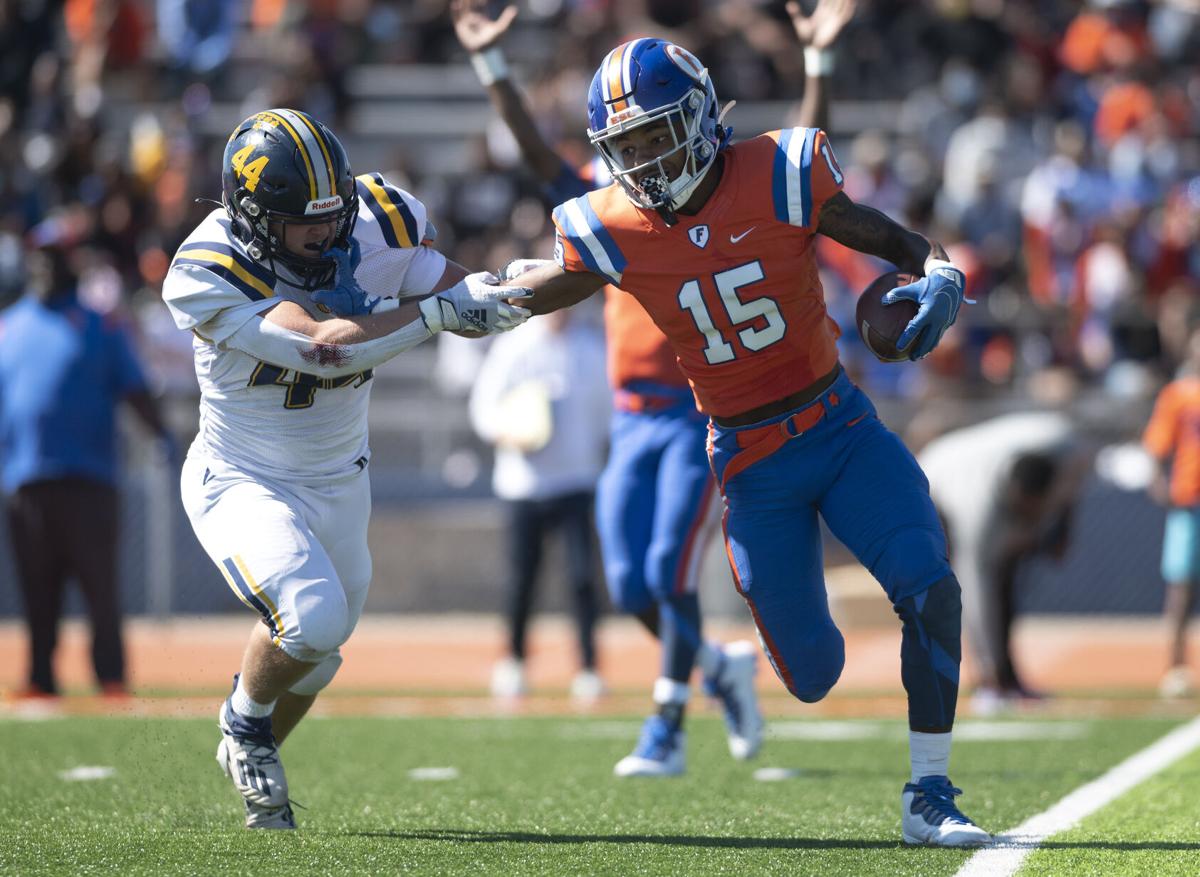 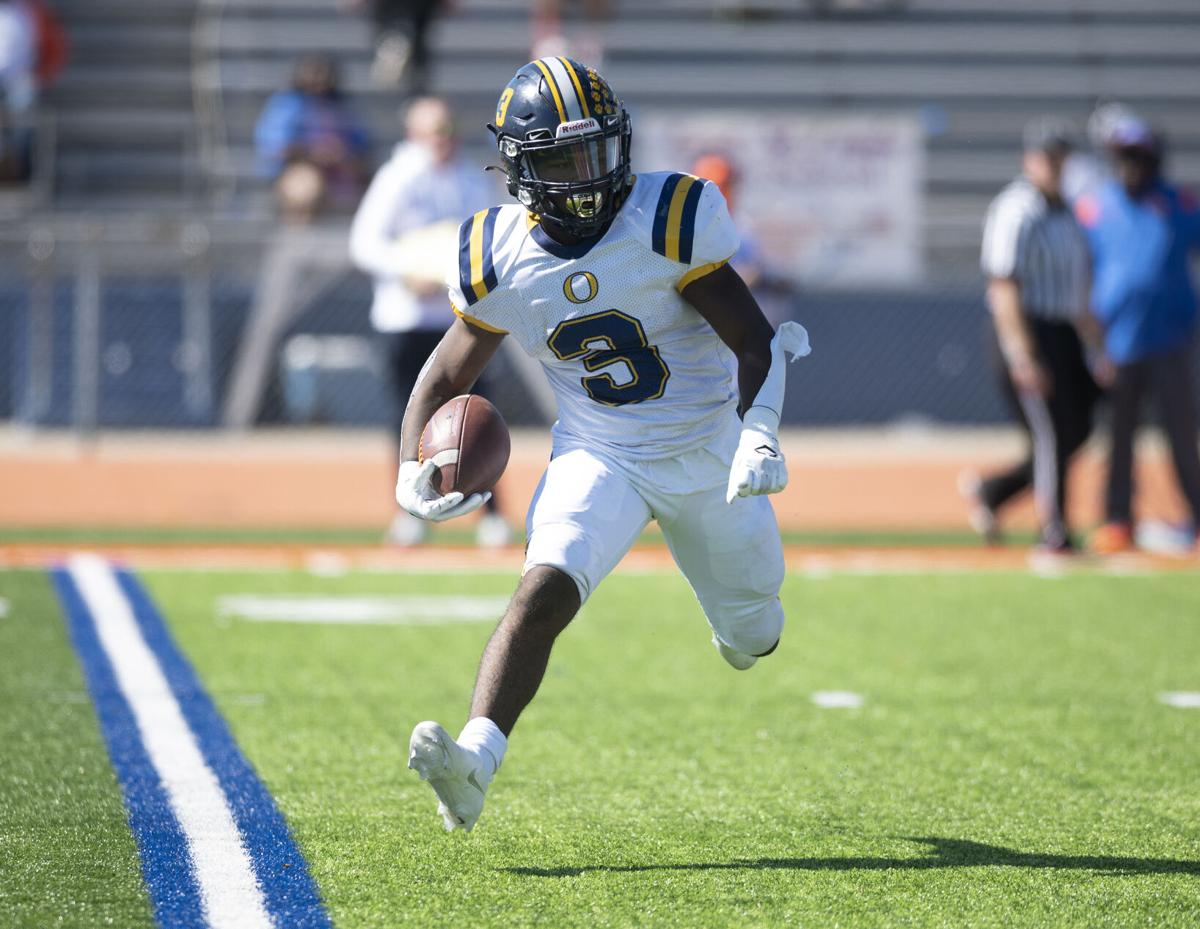 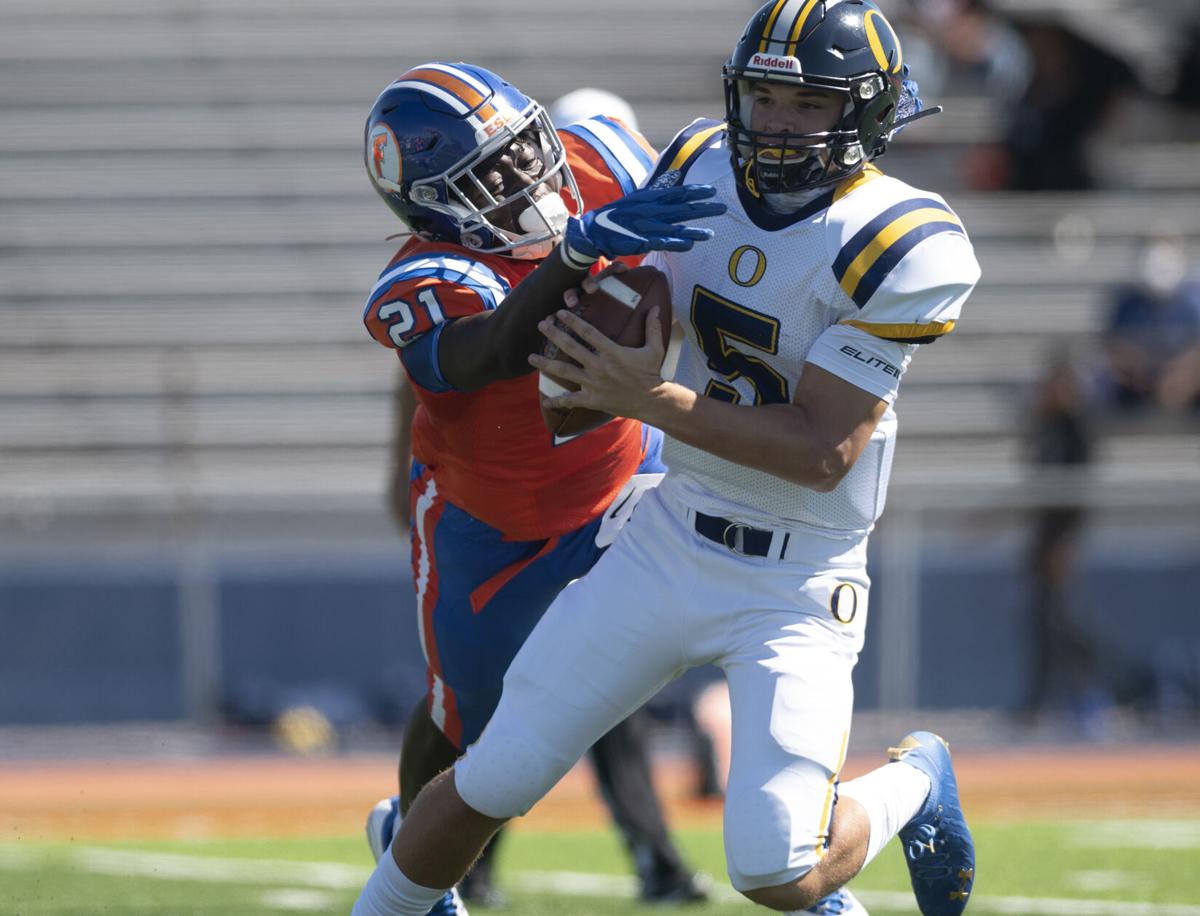 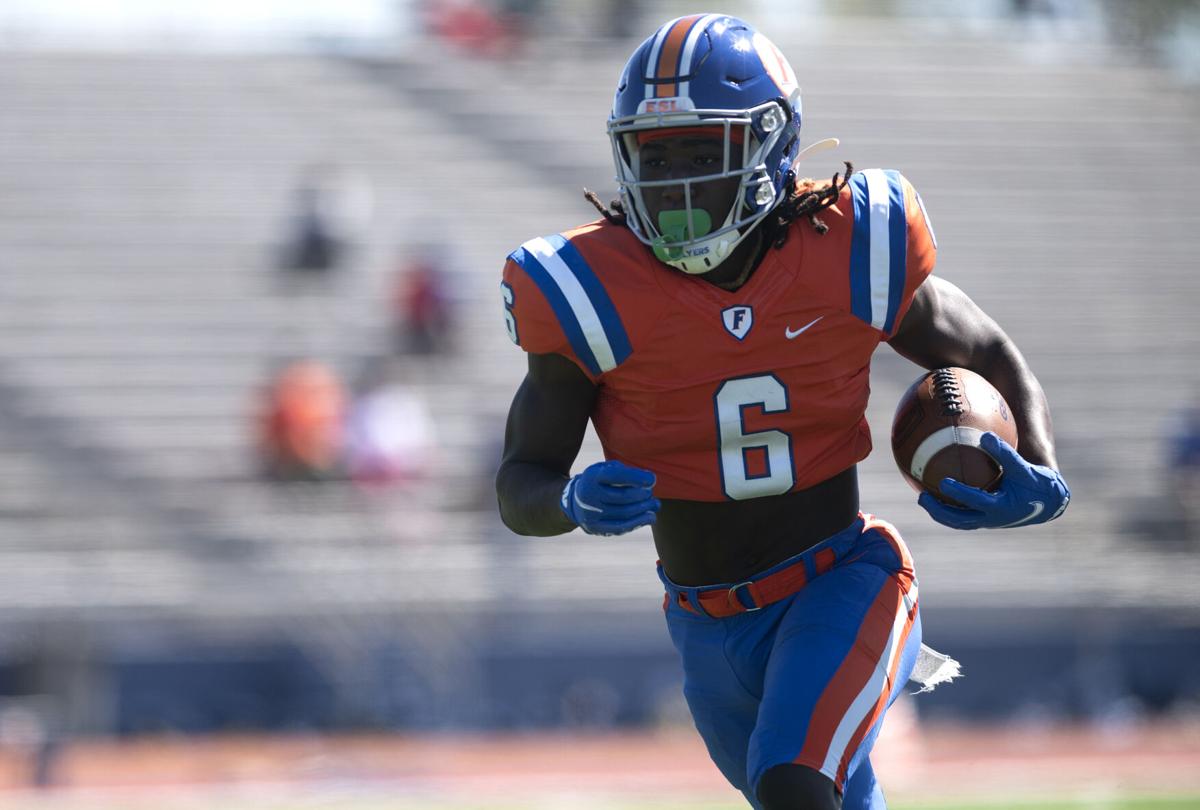 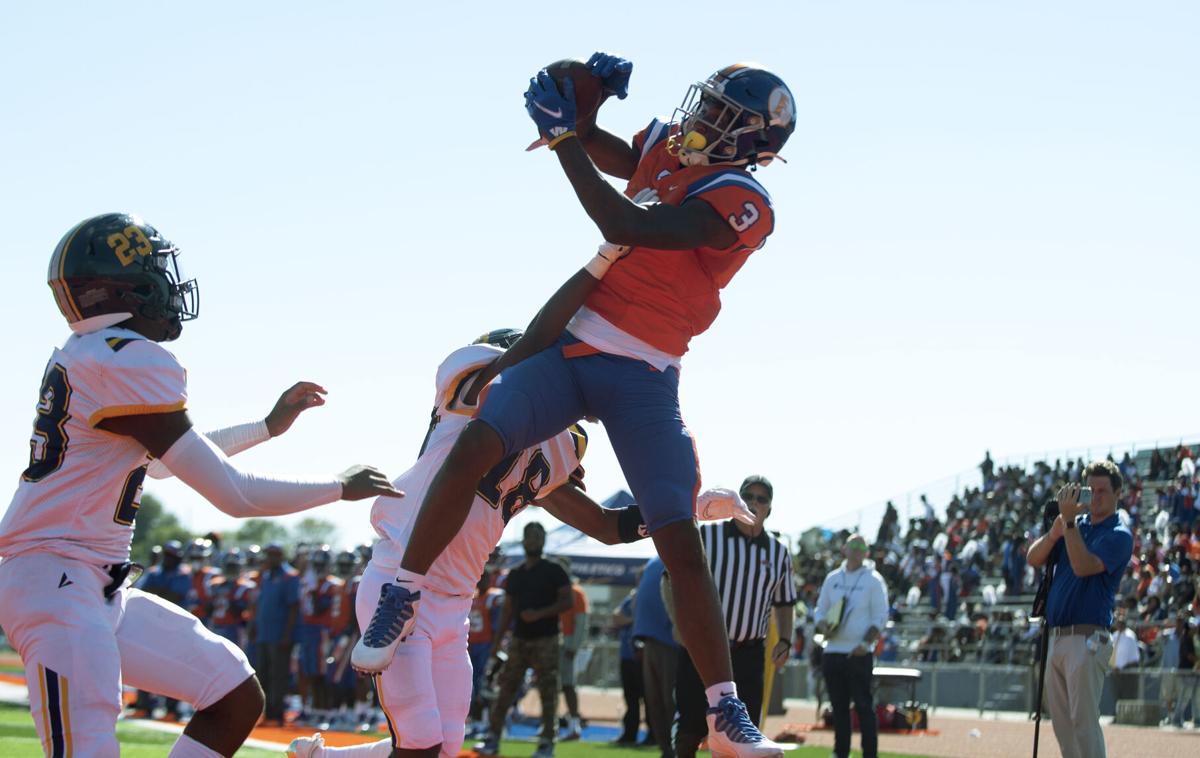 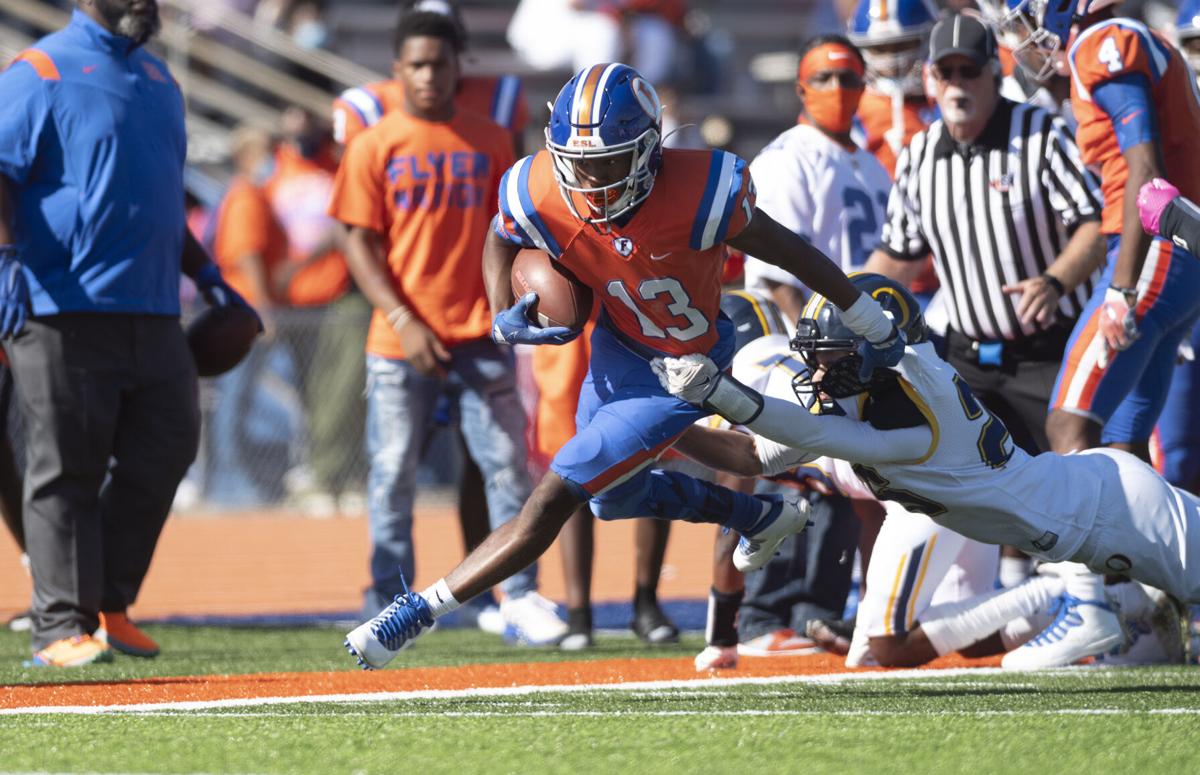 EAST ST. LOUIS — Miles McVay had been waiting on this game for more than five months.

When the O’Fallon football team rose up and beat East St. Louis on April 10 during the Illinois High School Association’s modified spring season, the Panthers enjoyed their win a little too much for McVay’s taste.

“They decided to shoot TikToks on the field,” said McVay, a 6-foot-7 and 345-pound junior offensive lineman for the Flyers. “So we had to show them what a TikTok was.”

There would be no celebratory social media posts out of the Panthers this Saturday. East St. Louis dominated in all phases of the game as it rolled to a 48-2 Southwestern Conference victory at Clyde C. Jordan Stadium.

The No. 1 large school in the STLhighschoolsports.com rankings, East St. Louis (4-1 overall, 2-0 league) let out all of its frustrations from the spring on O’Fallon’s offense. The Flyers defense was relentless as it held the Panthers fewer than 100 total yards and gave up four first downs.

The No. 8 large school, O’Fallon (3-2, 1-1) repeatedly leaned on senior running back DeAndre Lawrence, who rushed 19 times for 53 yards. Junior quarterback Colt Michael completed 6 of 15 passes for 28 yards, was intercepted once and sacked three times. His interception proved costly as it went in the direction of Toriano Pride. A senior cornerback and Clemson recruit, Pride snagged the ball and returned it 45 yards for a touchdown, his first pick-six of the season.

“My eyes got big because they usually don’t throw at me,” Pride said with a smile. “When I caught it, I had to do what I do and score with it. I wasn’t going out of bounds, I had to take it to the crib.”

Pride’s touchdown made it 22-0 with 1 minute and 7 seconds to play in the first quarter. East St. Louis took a 34-2 lead into halftime.

“It was definitely tough sledding,” O’Fallon coach Byron Gettis said. “We all have film. We know East St. Louis is really talented and one of the best teams in the state and in the Midwest. For our program we want to come out and compete against teams like that. You’re going to take your lumps and bruises and stuff like that when you play a team like that. The main thing is we compete.”

Other teams don’t have Luther Burden III. The East St. Louis five-star senior wide receiver was unable to give the homecoming crowd the electrifying punt return for a touchdown it wanted. Instead it was forced to settle for him catching nine passes for 125 yards and scoring three touchdowns. Burden took a short pass from sophomore quarterback Robert “Pops” Battle and turned it into an incredible 61-yard catch and run. He broke several tackles near the line of scrimmage and proceeded to torch the turf on his way down the right sideline for the score.

One of the most coveted uncommitted players in the nation, Burden announced he will make a verbal commitment Oct. 19. He’s trimmed his extensive list of offers down to Missouri, Alabama and Georgia.

Battle had a solid afternoon as he completed 20 of 25 passes for 252 yards and four touchdowns. He was intercepted on the last play of the first half as he tried to thread the needle to Burden in the end zone. He also rushed for 67 yards.

“We were just trying to score,” Battle said. “We shut them down.”

If there was one thing the Flyers wished they could have back from Saturday it’s the two points they gave up to the Panthers. Battle took a sack in the end zone in the second quarter to give O’Fallon its only score. It’s the first points the Flyers have given up in Southwestern Conference play after they shut out Belleville East last week.

McVay was not happy the offensive line couldn’t keep Battle's jersey clean deep in its own territory.

“It’s embarrassing,” McVay said. “It’s just embarrassing. It shows we still have work to do.”

East St. Louis coach Darren Sunkett would agree with his big tackle most days but thought Saturday’s performance was among the most thorough he’s seen out of his team the first half of the season.

“I thought we played well in all aspects of the game,” Sunkett said. “Offense performed, defense performed, special teams, unless you want to add extra points but everybody knows we don’t have a kicker. I thought everyone did well.”

O’Fallon knew it was in for East Side’s best effort after last season's win. And if it didn’t then the musical selection prior to kickoff should have given the Panthers a clue.

James Brown’s “The Payback” blared from the speakers as the team’s lined up for the opening kickoff.

“We kept that game in the back of our mind,” Sunkett said. “We kept that in our memory bank and we knew that once the real season started we’d avenge that loss in the spring.”

It was the Chris Cotton show on Friday night at De Smet.

Football notebook: Summit is 7-0 for first time; Brentwood beats U. City on Monday

Drew Krobath could have used his track spikes.

Lindbergh leans on Hnilo to hold off Hazelwood Central

FLORISSANT — The joy that coursed through Jake Hnilo overtook any pain he was feeling Saturday afternoon.

IMPERIAL — It was the play of a lifetime, and Seckman High senior Matthew Bonebrake made the most of it.