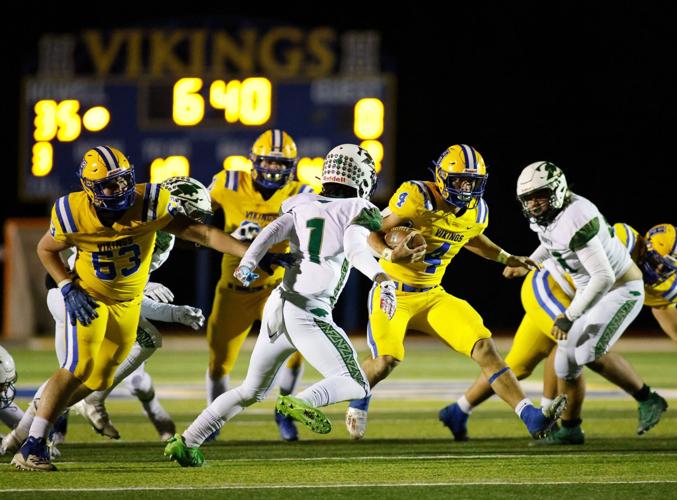 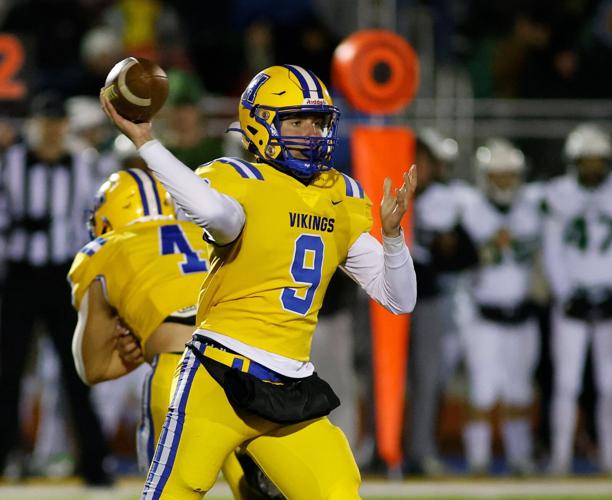 Schedules and scores for the Illinois and Missouri high school football postseason.

The Trojans won 23-21, advanced to a state semifinal and ushered the Vikings into the offseason to ponder what could have been.

“I’ve had that image replaying in my mind every single day since,” Bryles said. “It keeps me going and motivated to win every play.”

It’s not just the 6-foot-3 and 230-pound Bryles. Howell’s returning players were constantly reminded of how close they had come to the team’s first semifinal appearance since 2014. Scribbled on the chalkboard in the weight room was “23-21.” It was etched there winter, spring and summer.

“It’s something we looked at every day,” senior right guard JB Ney said. “It fired us up to lift weights every day. Over the summer it was the same mentality. It’s something that motivated us stronger than anything else and brought us together as a team.”

Howell turned its offseason of frustration into one of the best seasons in school history.

The No. 3 large school in the STLhighschoolsports.com rankings and the No. 2 team in the Class 5 Missouri Media poll, Howell (12-0) travels to Class 5 No. 1 Carthage (11-1) for a Class 5 semifinal at 1 p.m. Saturday. It’s just the third semifinal appearance ever for Howell and third since 2012, when it finished as Class 6 runner-up to Blue Springs.

Expectations were sky high for the Vikings this fall. Over the past three seasons Howell is a combined 29-6. Two of those losses came against De Smet in the district tournament. Both times the Spartans went on to play for the state championship. Troy knocked out the Vikings on the last play of the game last year.

Moving into Class 5 this season, Howell wouldn’t have to see the likes of De Smet or reigning Class 6 champion CBC. It did get a rematch with GAC South rival Troy in the regular season, which it won 35-19, its tightest game so far.

The Vikings returned an abundance of experienced talent all over the field save one place — the offensive line.

Four starters graduated and junior left tackle Logan Scrivner was more of a rotation player than stalwart. The line was the biggest unknown as Howell went through its offseason preparation. The ability of the new starters to step in and do their jobs would determine the Vikings’ fate. If the offensive line doesn’t work, nothing works.

“Coach told us at the beginning of the season we’d be the question mark of this team,” Ney said. “It was something we took personal and it’s a mentality we’ve had. We used that as motivation and to get better every week.”

Turns out they’ve done just fine. Howell’s offense has been a well-oiled machine. Consider that senior kicker Josh Deal has made 81 extra-point kicks this season, by far and away the most in the area. Senior running back Brady Hultman has rushed for 1,059 yards and 20 touchdowns. Junior quarterback Adam Shipley has passed for 1,774 yards, 23 touchdowns and rushed for 602 yards and 10 touchdowns.

None of that happens if Howell’s line doesn’t consistently execute at a high level.

“I just challenged those kids,” Howell coach Brent Chojnacki said. “They rose to the challenge. We knew those kids would be smart kids.”

Chojnacki said the average grade point average on the line is 4.1 with junior center Chase Garbarini leading the way with a 4.5. It’s the 6-foot and 245-pound Garbarini who is tasked with making sure his fellow linemen know their assignments prior to every snap.

“We put a lot of trust in him to get the guys onto the right combo blocks and whatnot,” Chojnacki said.

The quintet didn’t play together last season but have established a good chemistry this fall. They have bonded over meals on Monday nights. After a particularly tough game or even a practice they’re each in a cold tub for an ice bath that none of them want but know is necessary.

They have taken the pressure that was on them entering the season and used it to jell into a powerful force that few opponents have managed to crack. Chojnacki said Shipley has been sacked twice all season. There’s an immense amount of confidence that comes when a quarterback knows he’s not going to spend the game running for his life.

“I feel like we’re such good friends and have such good chemistry we work as one cohesive unit,” Bryles said “It’s not like five guys out there, we’re like one person, one unit doing a common job.”

This unit will be tested Saturday in so many ways. For just the third time this season Howell will travel outside of St. Charles County to play. Its first trip of the season was to Lutheran North. Its second was to Troy. The five-hour bus ride to Carthage will be something new. The Vikings did bus their way to the University of Alabama this summer for a camp, so Chojnacki is hopeful this experience won’t be completely unfamiliar.

“It’s going to feel like a college road trip, staying in a hotel with all the guys, team bonding before the game,” sophomore left guard Mitch Weisenborn said. “I think we’re going to have a great time.”

What will certainly be new is facing a Carthage team that will have a wild and raucous home crowd cheering it on. The Tigers won the Class 5 title in 2019 and have 21 seniors who will be playing for their careers. They didn’t come this far to lay down.

“Carthage wants to win up front. They want to win the box, they want to pound the ball,” Chojnacki said. “They’re a physical football team. We’ve played 12 weeks of physical football, too. We’ll see if we can match their physicality and if we do we’ll be just fine.”

When it comes to being physical the offensive line sets the tone. When it’s your job to crash into someone else on every, single snap, that’s just life as a lineman.

“We’re always overlooked, we’re never in the light, we’re always in the shade,” Gabarini said. “We’re only noticed when we mess up. It’s something we’ve learned to accept and we just take care of it as we go.”

They won’t be overlooked Saturday. Howell historically has traveled well and there should be plenty of blue and yellow clad supporters at Carthage. That support is what the Vikings fall back on when they’re in a tough spot in a game, at practice or even in the weight room. They’re not putting themselves through all of this just for themselves.

“We’re playing for each other but most importantly we’re playing for the community,” Ney said. “The Francis Howell community is a team. They come out here every Friday night, packing the stands. They’re always rowdy and supporting us even in road games. That’s one of things that’s been driving us, playing for something bigger than football itself.”

David Kvidahl is a columnist for STL High School Sports.

The Flyers trailed early and then rolled to their first title since 2019 by scoring the most points ever in a Class 6A title game.

The Cadets blocked a field goal attempt late in regulation and staved off Lee's Summit North in Class 6 title game.

The Dragons rallied from a 16-point deficit in the second half to move one victory from a second successive championship.

CARTHAGE — If there was any fear of a hangover from a 266-mile bus ride, Kendall Gurley put them to rest.

The Lions advanced to their first championship game since 2018 after semifinal losses the last two seasons.

The Crusaders grew through the rigors of a four-game losing streak and are in a state final for the first time.