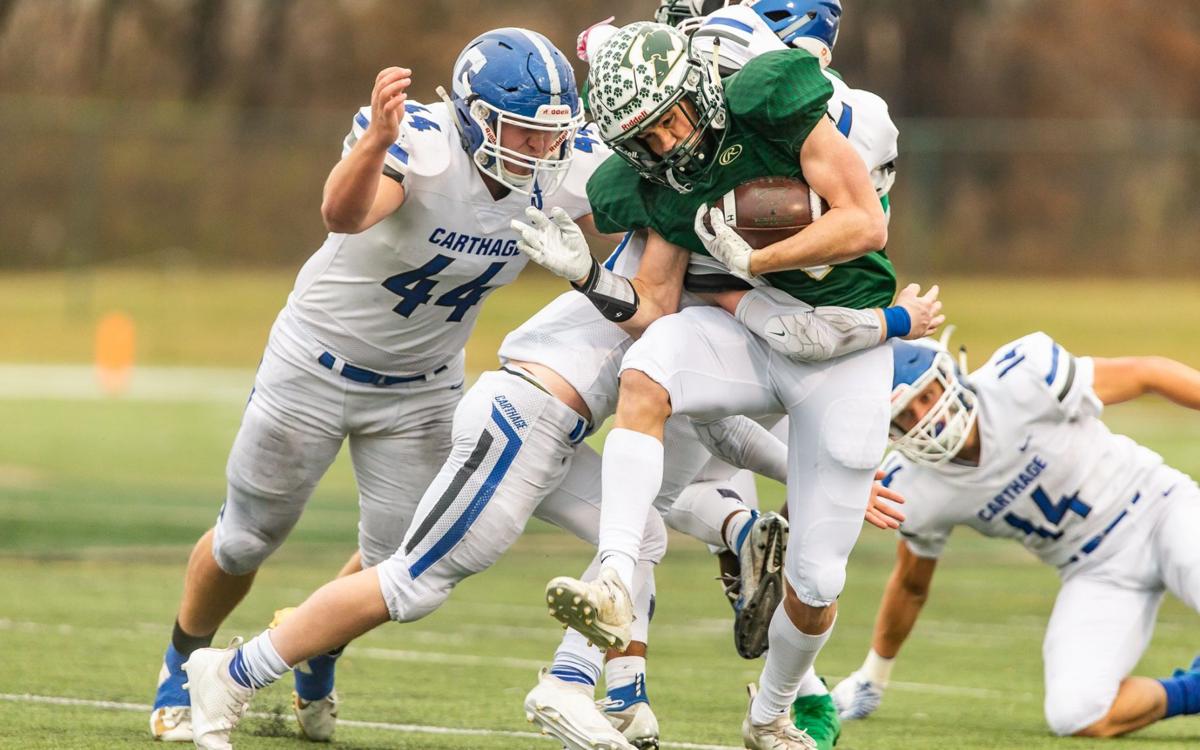 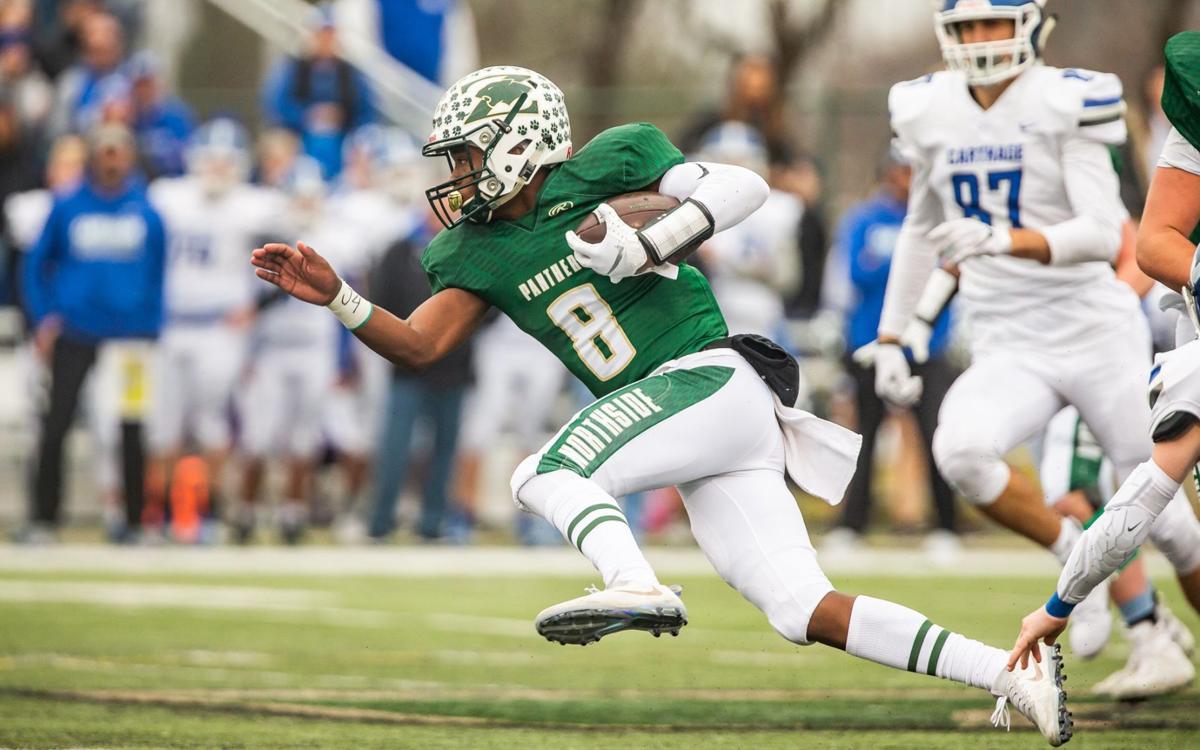 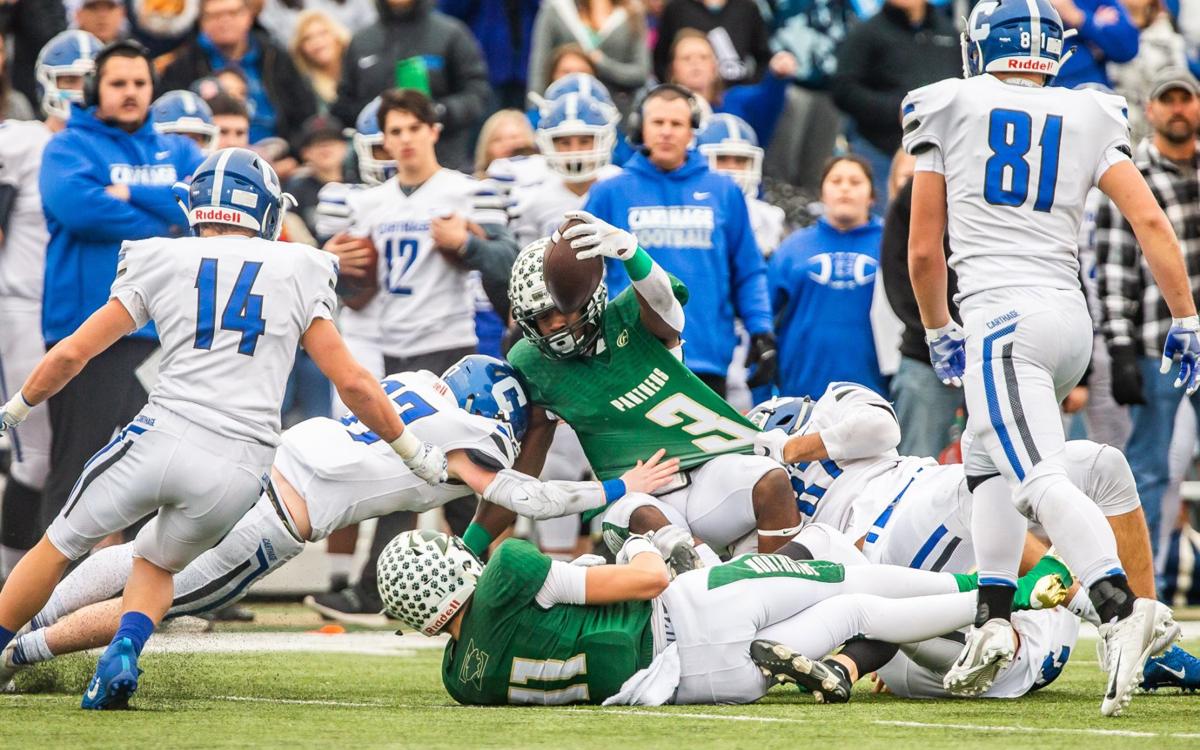 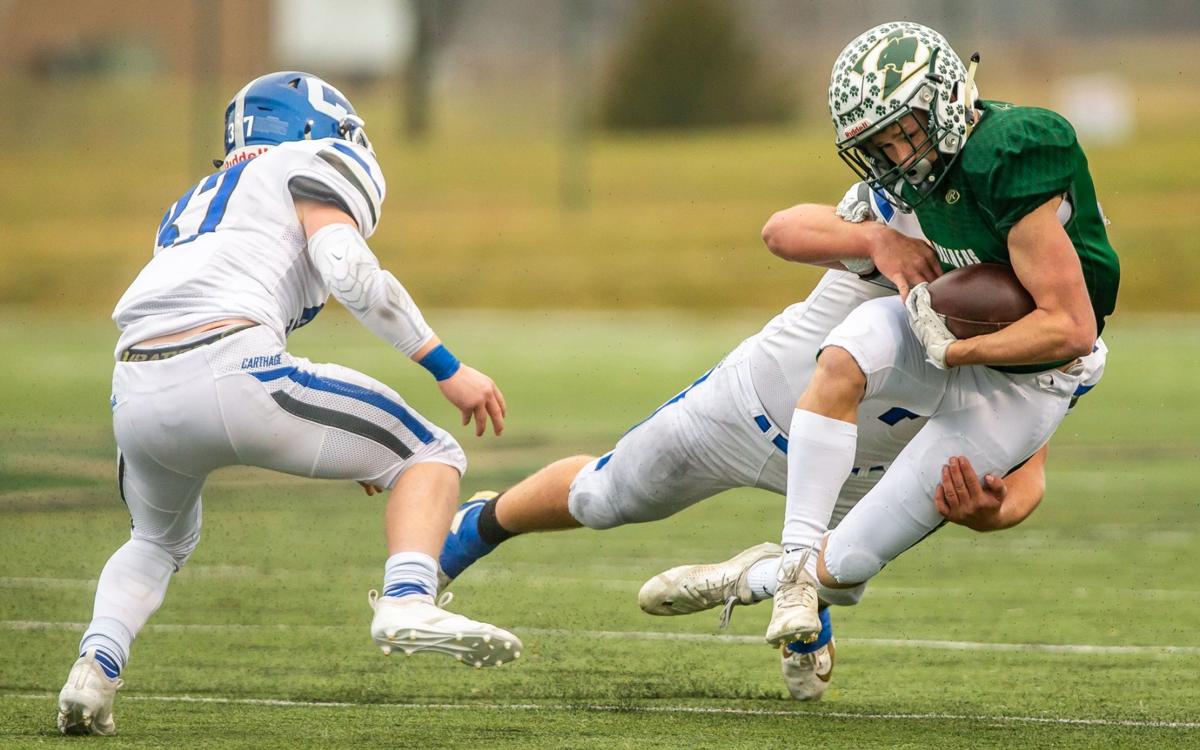 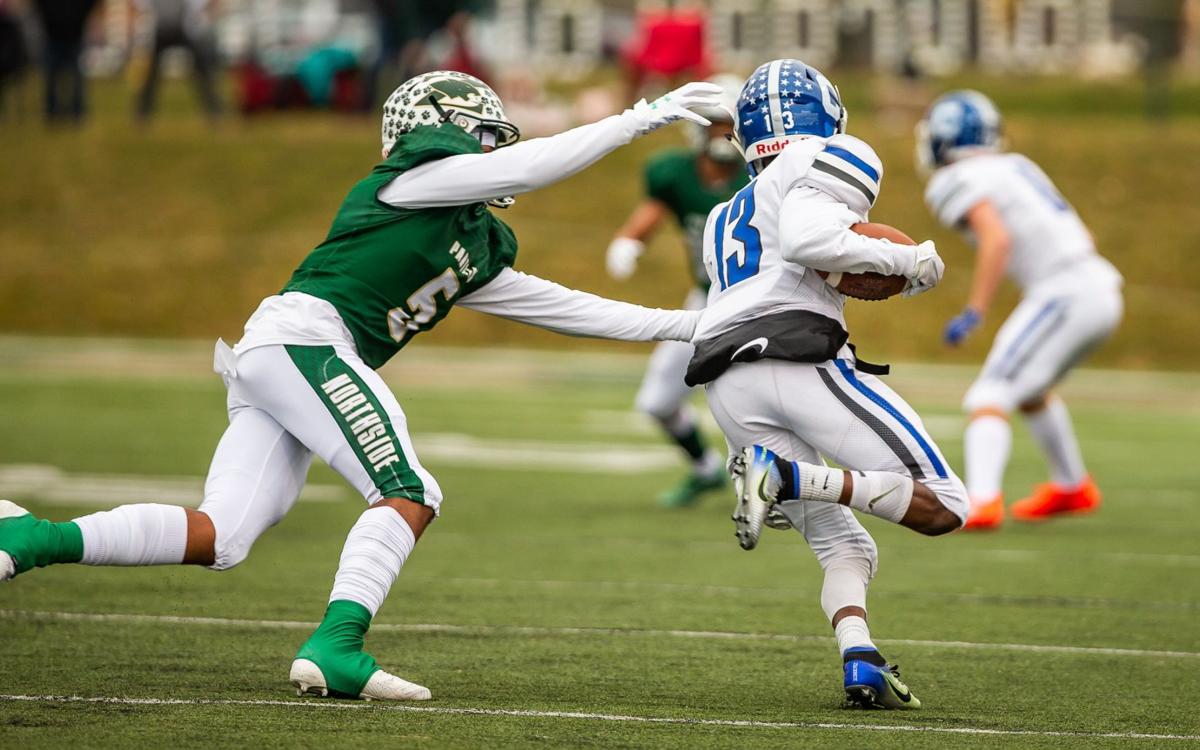 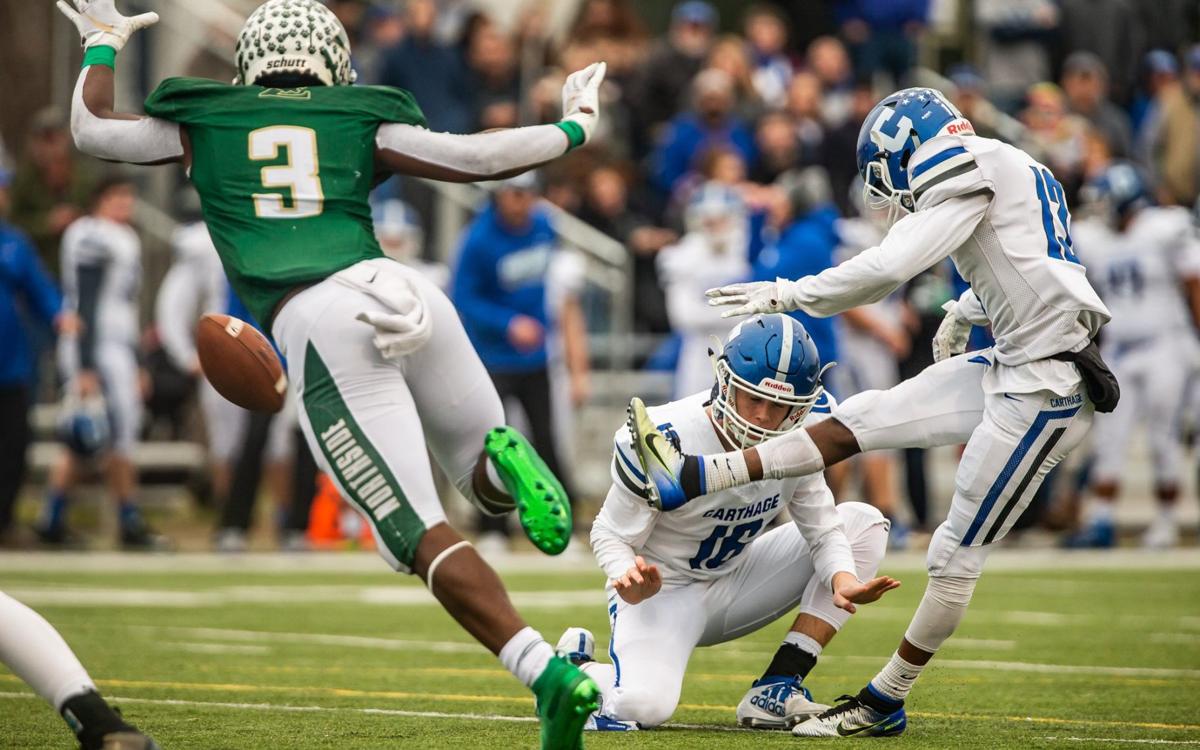 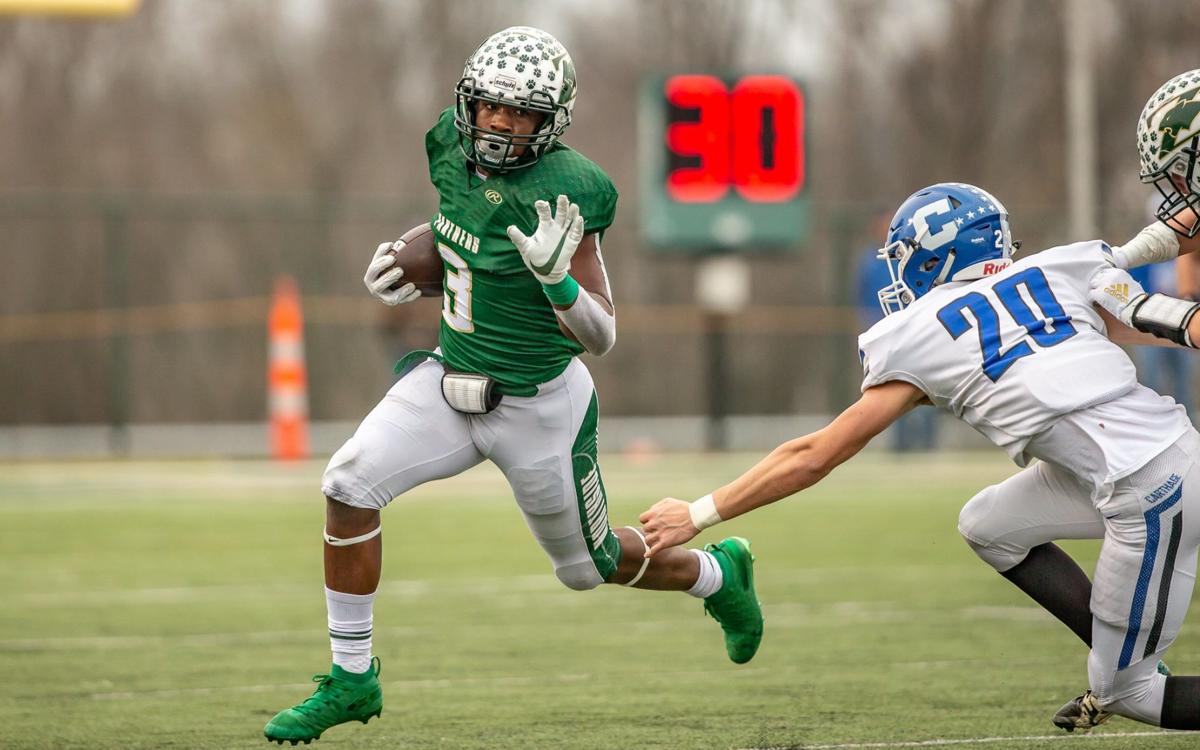 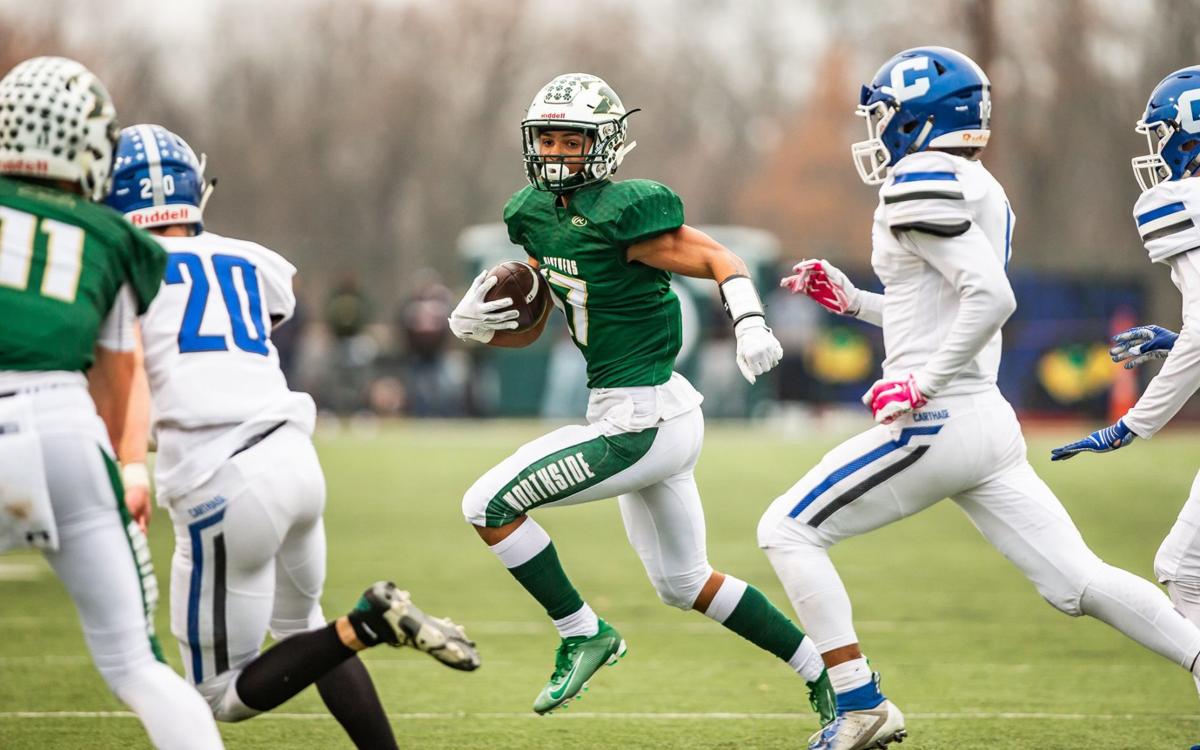 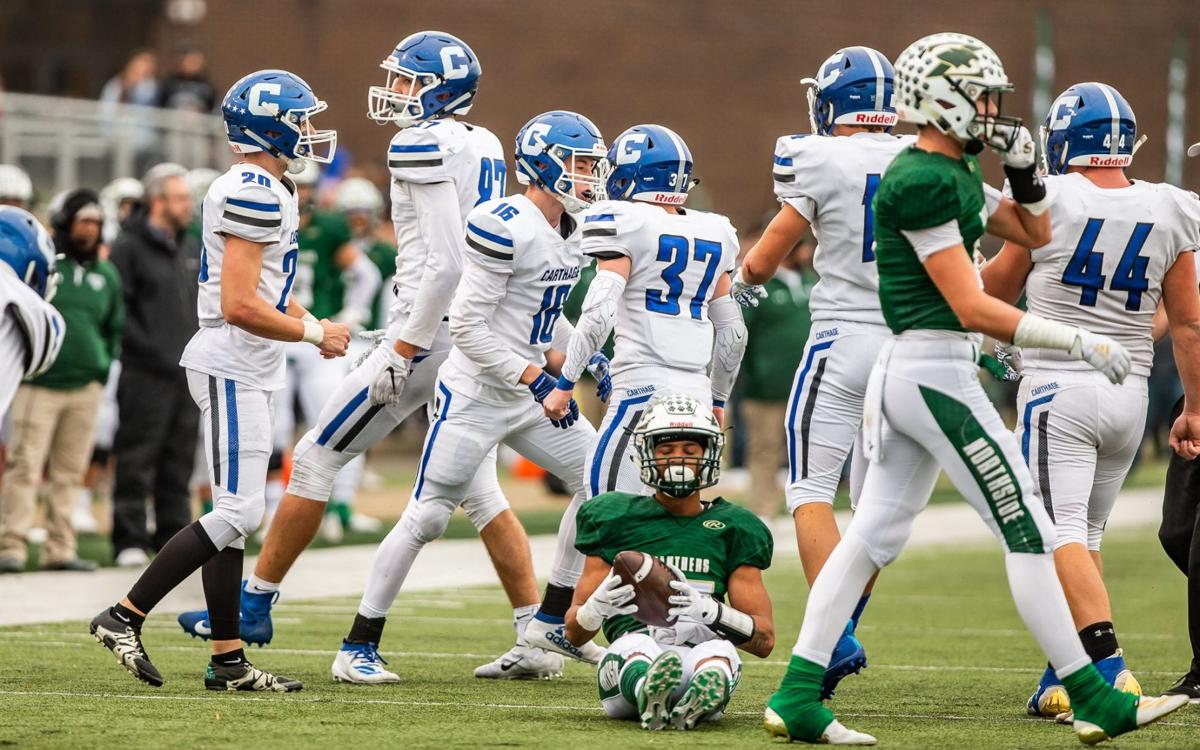 Fort Zumwalt North's Izaiah Hartrup gets up slowly after being tackled for a loss during a Class 5 semifinal football game on Saturday, Nov. 30, 2019, at Fort Zumwalt North High School in O'Fallon, Mo. Gordon Radford | Special to STLhighschoolsports.com 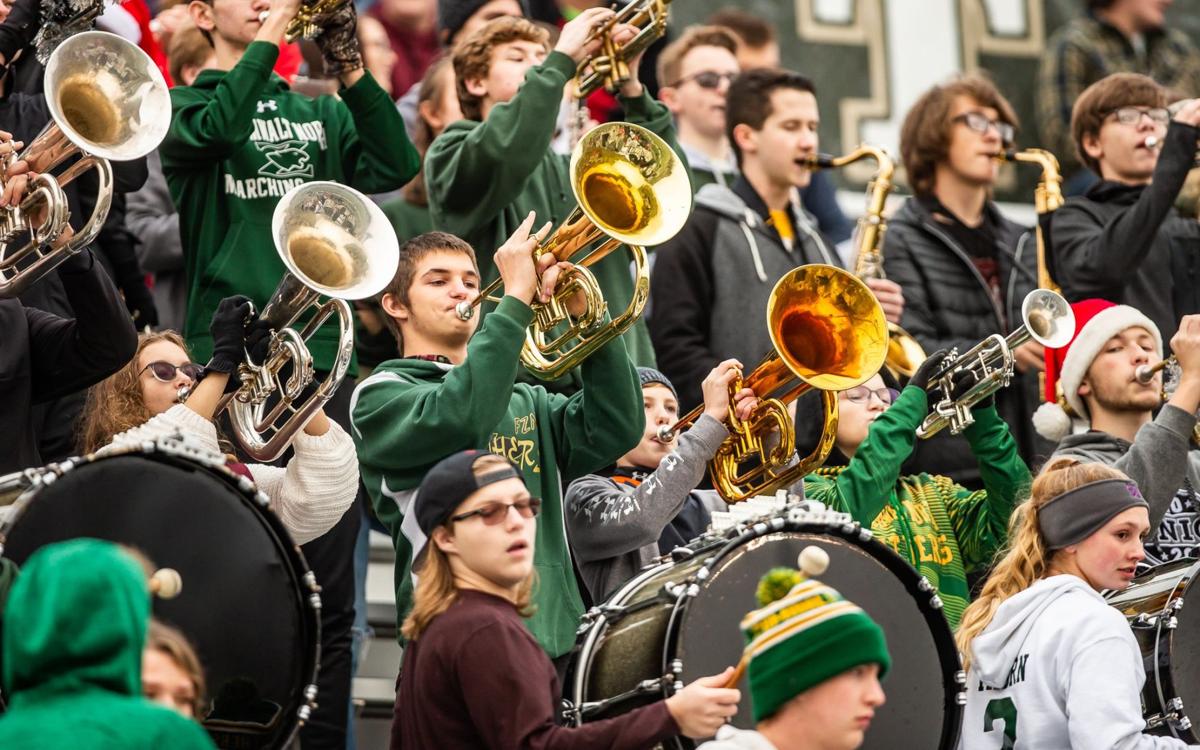 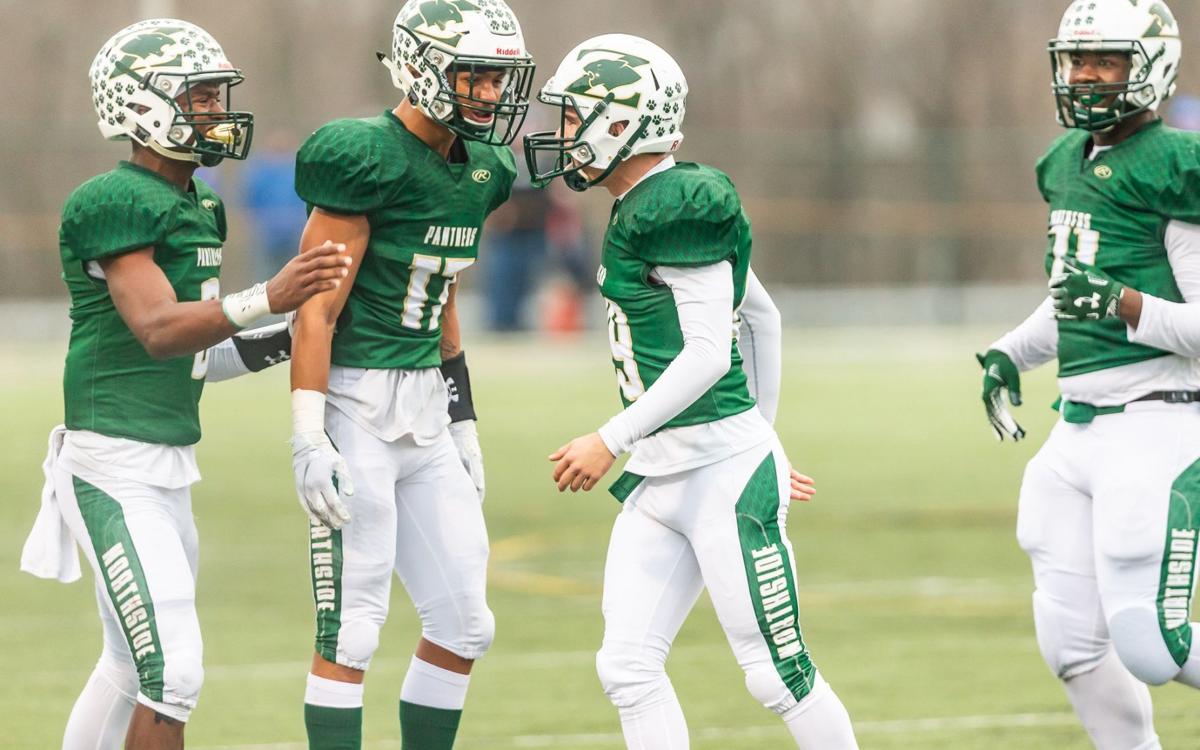 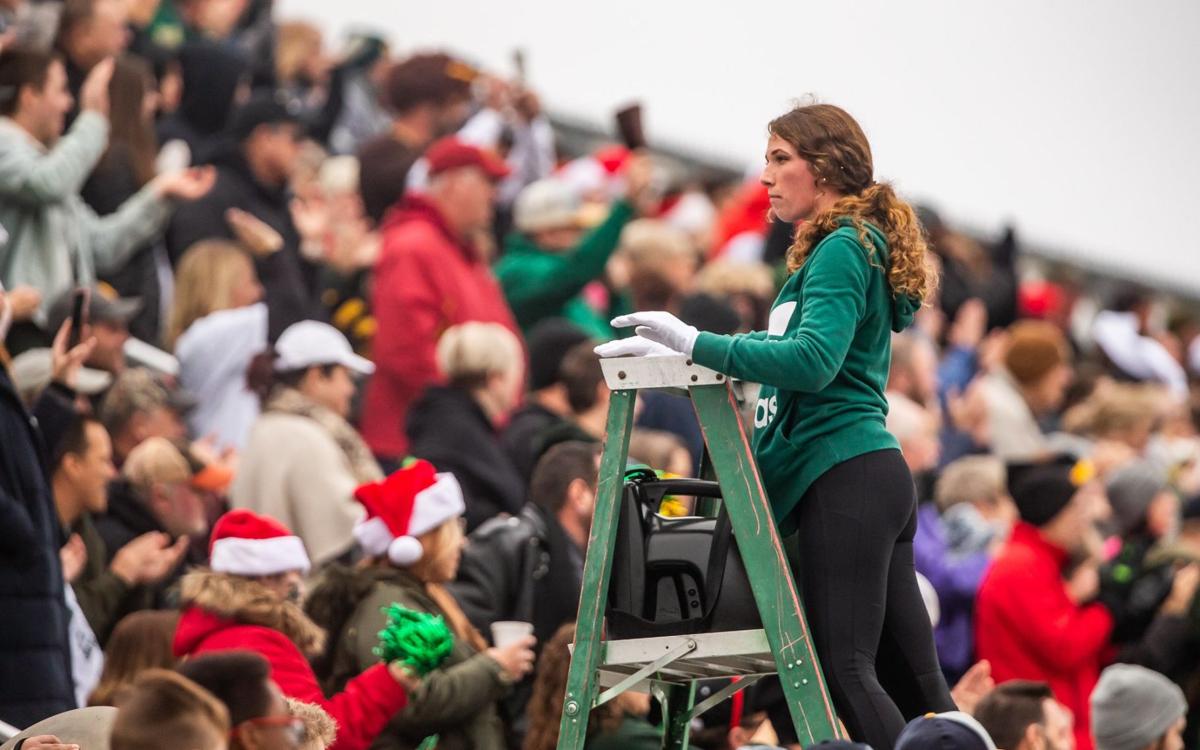 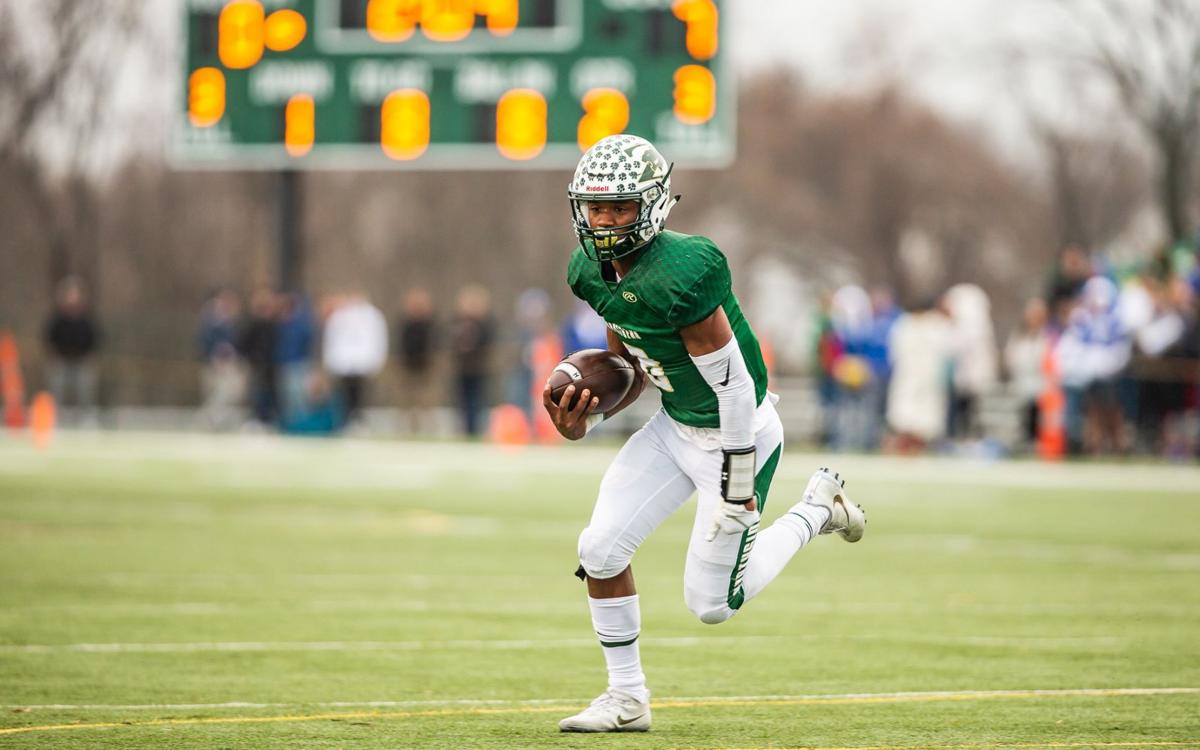 O'FALLON, Mo. — In a game full of long drives, it was a monster drive by its opponent that spelled doom for the Fort Zumwalt North football team.

Carthage amassed a 17-play, 80-yard drive that chewed up the first 9 minutes, 12 seconds of the fourth quarter and capped it with the game-winning 1-yard touchdown run by junior quarterback Patrick Carlton with 2:48 to play to give the Tigers a 20-17 win in a Class 5 semifinal Saturday afternoon at Robert Fisher Stadium.

“I tried to stay as calm as possible,” Carlton said. “We've been waiting for this week for years. It's never been done in school history and we just did it tonight.”

Fort Zumwalt North (12-1), the No. 5 large school in the STLhighschoolsports.com rankings and No. 1 in Class 5, lost in the semifinal round for the second time in three seasons.

“There just weren't many possessions overall,” Panthers coach Joe Bacon said. “Both teams were running the ball, keeping that clock rolling with a lot of first downs. Neither side had all that many opportunities, but they were one better.”

Carthage (11-2), the No. 5 team in Class 5, moved on to its first state final appearance and will take on No. 2 Jackson (13-0) for the Class 5 championship at 7 p.m. Dec. 7, at Faurot Field in Columbia. The Tigers are the third team from the Central Ozark Conference to make it to the state championship this season, joining Joplin (Class 6) and Webb City (Class 4).

“We finally pushed through,” Carthage coach Jon Guidie said. “It couldn't have happened to a better group of kids right here. They stayed with it and believed in each other and won a ballgame.”

The game featured five drives of at least nine plays and a combined 431 yards on the ground — 232 for Zumwalt North and 199 for Carthage, one week after the Tigers rushed for 524 and the Panthers 291 in their respective quarterfinal wins.

“Great offensive teams and great defensive teams as well,” said Carlton, who had 83 yards rushing. “We had some big stops and played with a lot of heart and I think that's what got us this victory.”

After its defense held and took over at its own 28, Carthage marched 72 yards in 12 plays and took a 7-0 lead on a 10-yard keeper by Carlton on the first play of the second quarter.

Zumwalt North had a pair of long drives stall at the Carthage 28- and 19-yard lines, respectively, before finally breaking through on its third drive. Senior quarterback Cairo Payne carried the ball four times for 28 yards on the drive, including the last eight for the tying touchdown with 2:01 left in the first half.

“It was frustrating and that could have led to our kids not playing as hard, but they kept focus and they kept hammering away at it,” Bacon said.

After the defense secured its second consecutive three-and-out, the Panthers took over at the Tigers' 30 with 28.1 seconds remaining before halftime.

An incomplete pass and two runs equaling just one yard made it 4th-and-9 at the 29, but Owen Sears stepped up and booted a 46-yard field goal with 2.1 seconds left to give the Panthers a 10-7 lead at intermission.

“He's been great for us all year and we don't kick a lot of field goals,” Bacon said. “It was a turning point. It just wasn't the last one.”

Carthage took the second half kickoff and drove 63 yards in seven plays to regain the lead, as Carlton's second 10-yard QB keeper made it 14-10.

“That was big. We only had three possessions in the first half, we scored on one and then we were three-and-out on the next two,” Guidie said. “We got away from what we wanted to do, so at halftime we said we need to come back out and establish the mentality that we're gonna run the football.”

Payne answered with his second QB keeper TD on a 15-yard dash with 17.2 seconds left in the third to give the Panthers a 17-14 edge.

“That's a tough offense to defend,” Guidie said. “They have a lot of good playmakers over there, a lot of speed, a lot of talent.”

After a touchback, the Tigers started at their own 20 and went to work on the game-changing drive.

Except for an 11-yard Marcus Hartley catch, the drive was all Carlton and Tyler Mueller. Mueller, a senior running back who had 101 yards rushing on the day, carried the ball six times for 31 yards on the drive, while Carlton handled the other 10 rushes for 43 yards, including the final yard for his third score of the game to make it 20-17 after a bad snap on the PAT with 2:48 to play.

“They scored there right at the end of the third and we said, 'Guys, we're gonna put it on the backs of our offensive linemen, go 80 yards and get a score and go to the state title game,'” Guidie said. “And those kids stepped up and did it.”

Zumwalt North had another chance on offense and appeared to convert a 4th-and-8 with a 43-yard catch by Oakes, but the play was nullified by an illegal motion penalty and the Panthers misfired on a pass on the next play.

Zumwalt North still had two timeouts left when Carthage took over with 1:53 to play, but Mueller gained 11 yards on the first two running plays to give the Tigers the first down they needed to seal the win and finally get over the state semifinal hump after falling in that round in three of the last four seasons.

For the Panthers, it was their third semifinal appearance in four years after winning in that round in their Class 5 runner-up season of 2016 and losing in 2017. Despite falling short of a title, Zumwalt North has established itself as the top team in St. Charles County and one of the top squads in the metro area, compiling a 75-12 record over the past seven seasons.

“It was a great season,” Bacon said. “It was a pretty sour way to end it, but I'm extremely proud of our boys as far as how hard they fought and the way they carried themselves here. That's one of the worst moments maybe for some of them in their lives, but they handled it like men. Who you are is way more important than what you accomplish and they're showing that today.”

Fort Zumwalt North's Izaiah Hartrup gets up slowly after being tackled for a loss during a Class 5 semifinal football game on Saturday, Nov. 30, 2019, at Fort Zumwalt North High School in O'Fallon, Mo. Gordon Radford | Special to STLhighschoolsports.com