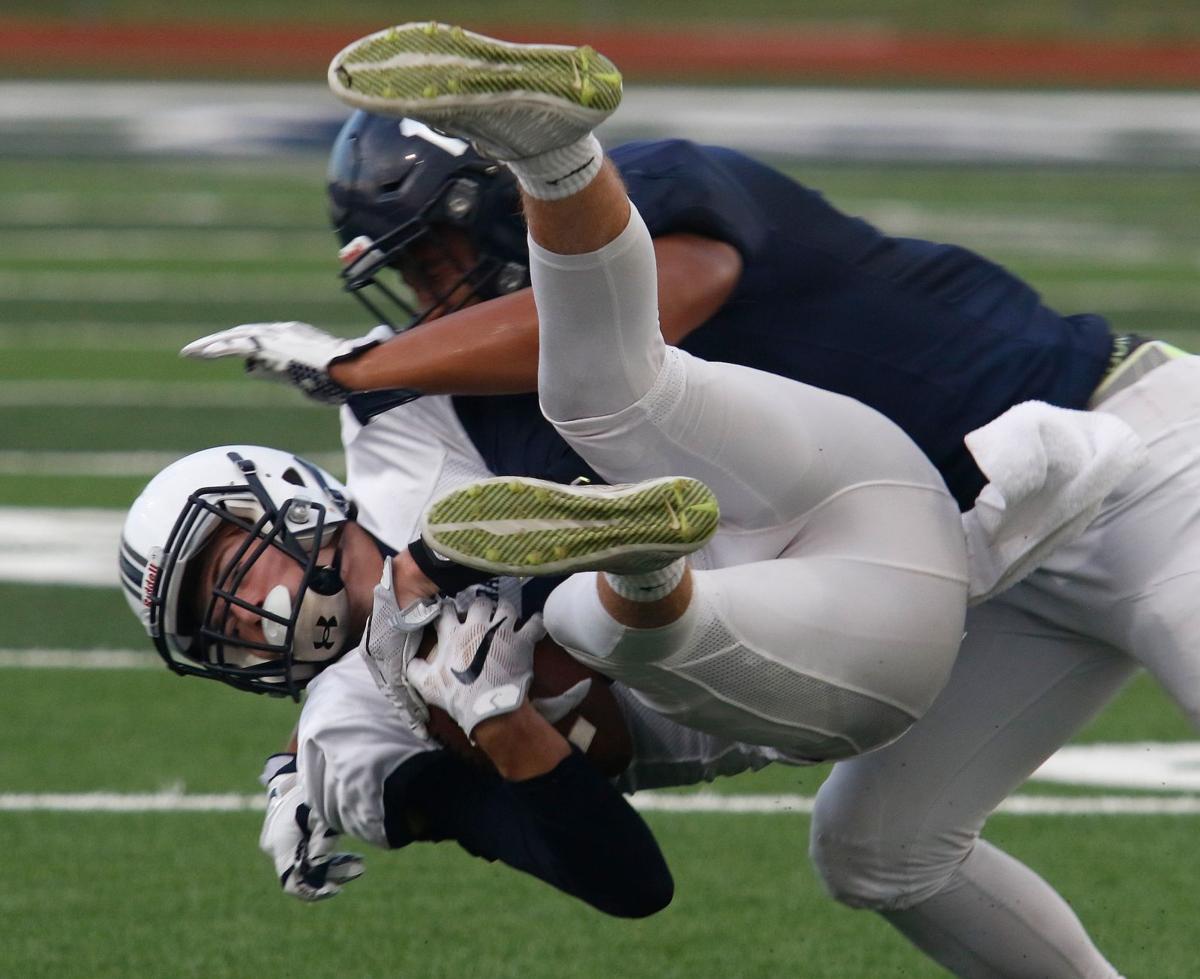 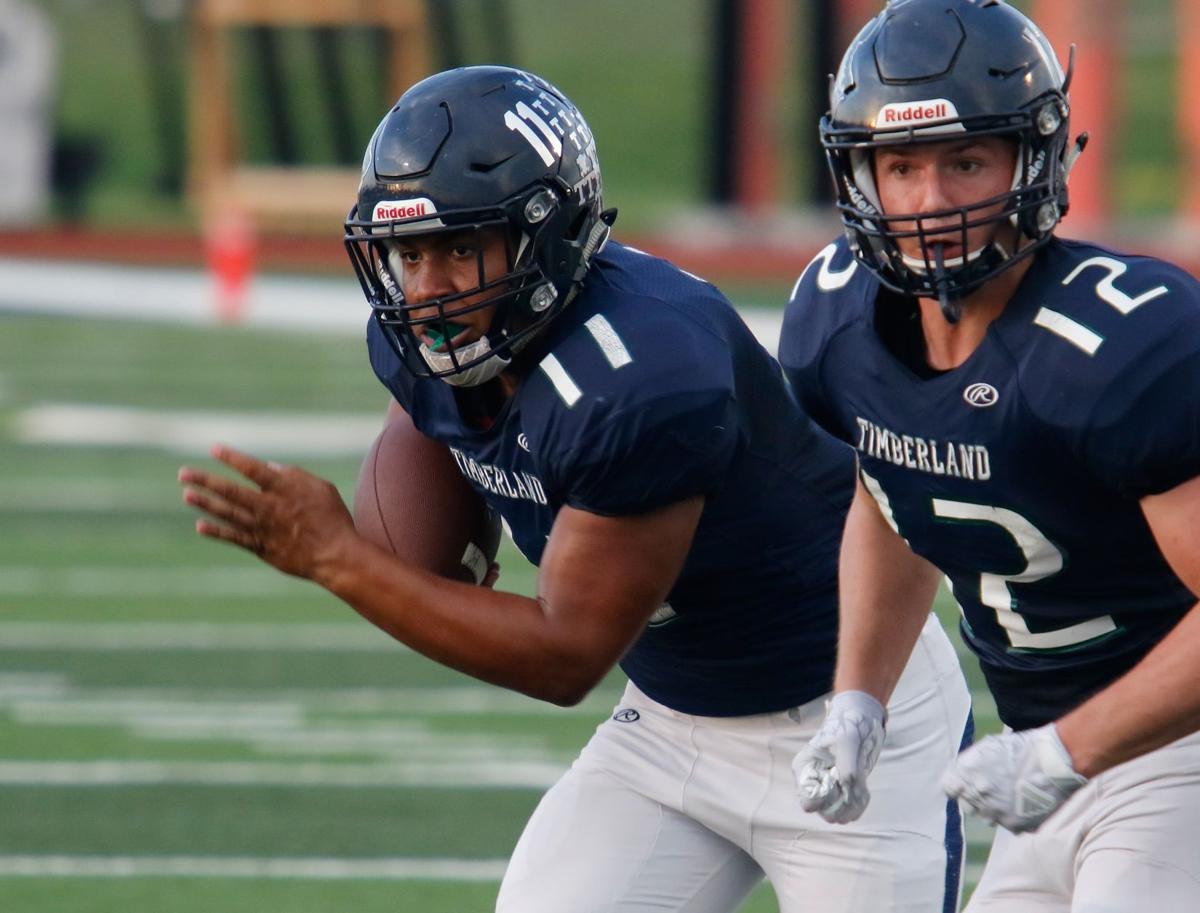 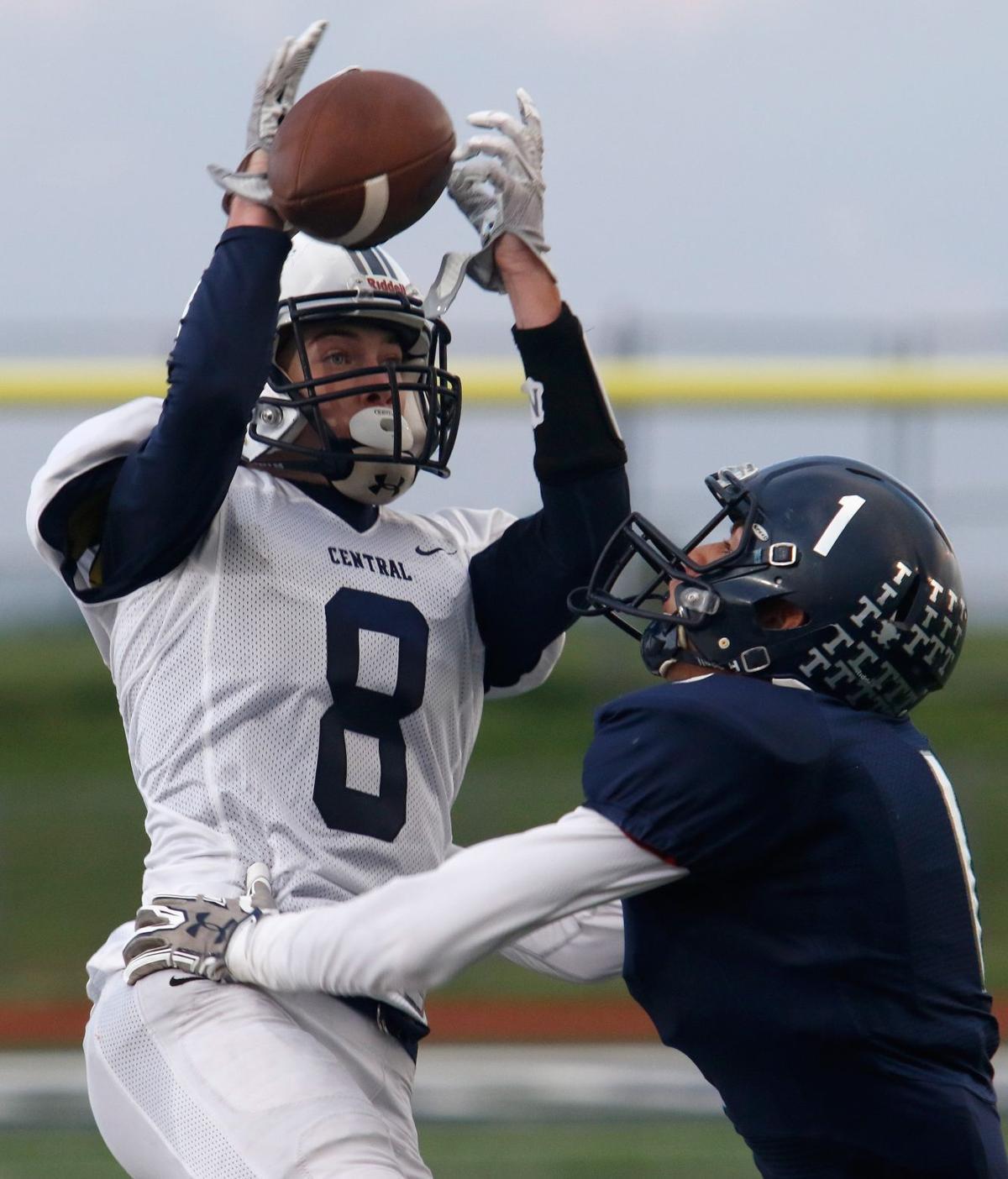 Francis Howell Central's Connor Riebel (8) goes up for a pass under pressure from Timberland at Timberland High School in Wentzville, Mo., on Sept. 9, 2016. Michael Gulledge, Special to STLhighschoolsports.com 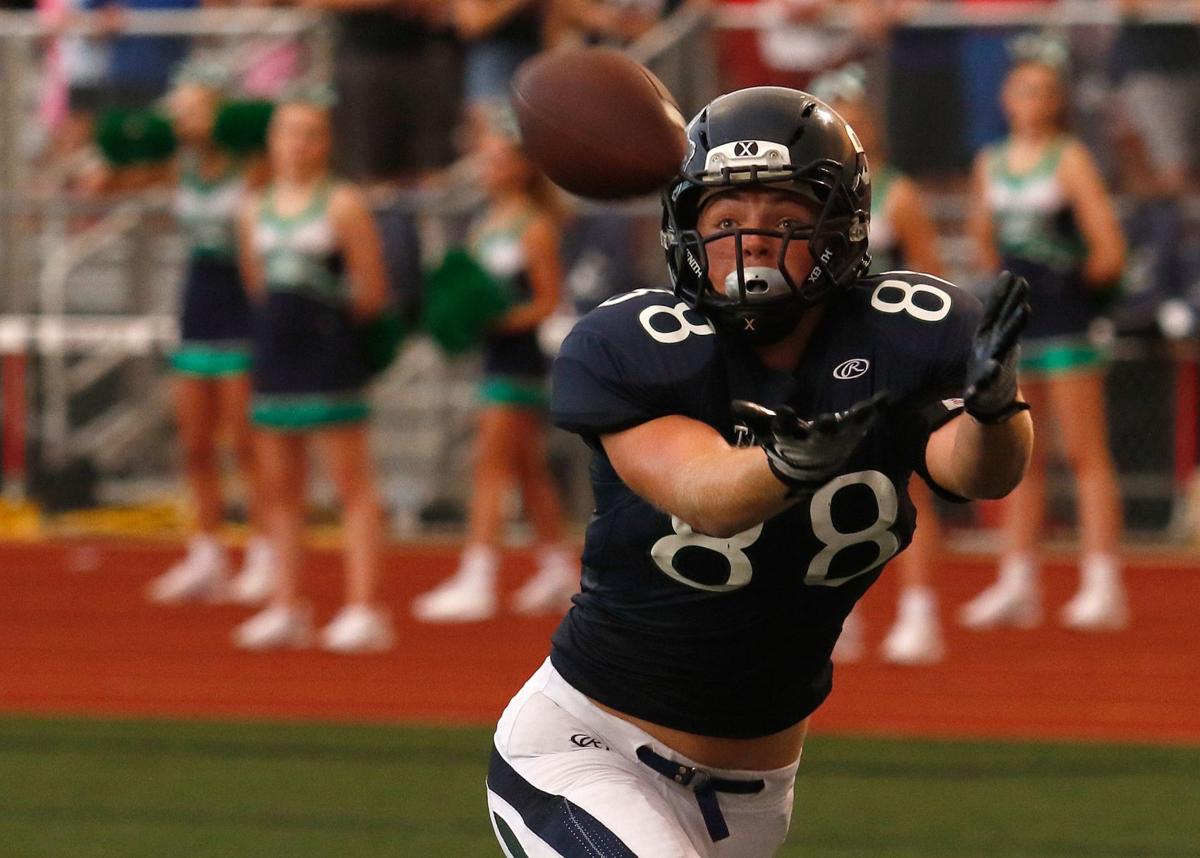 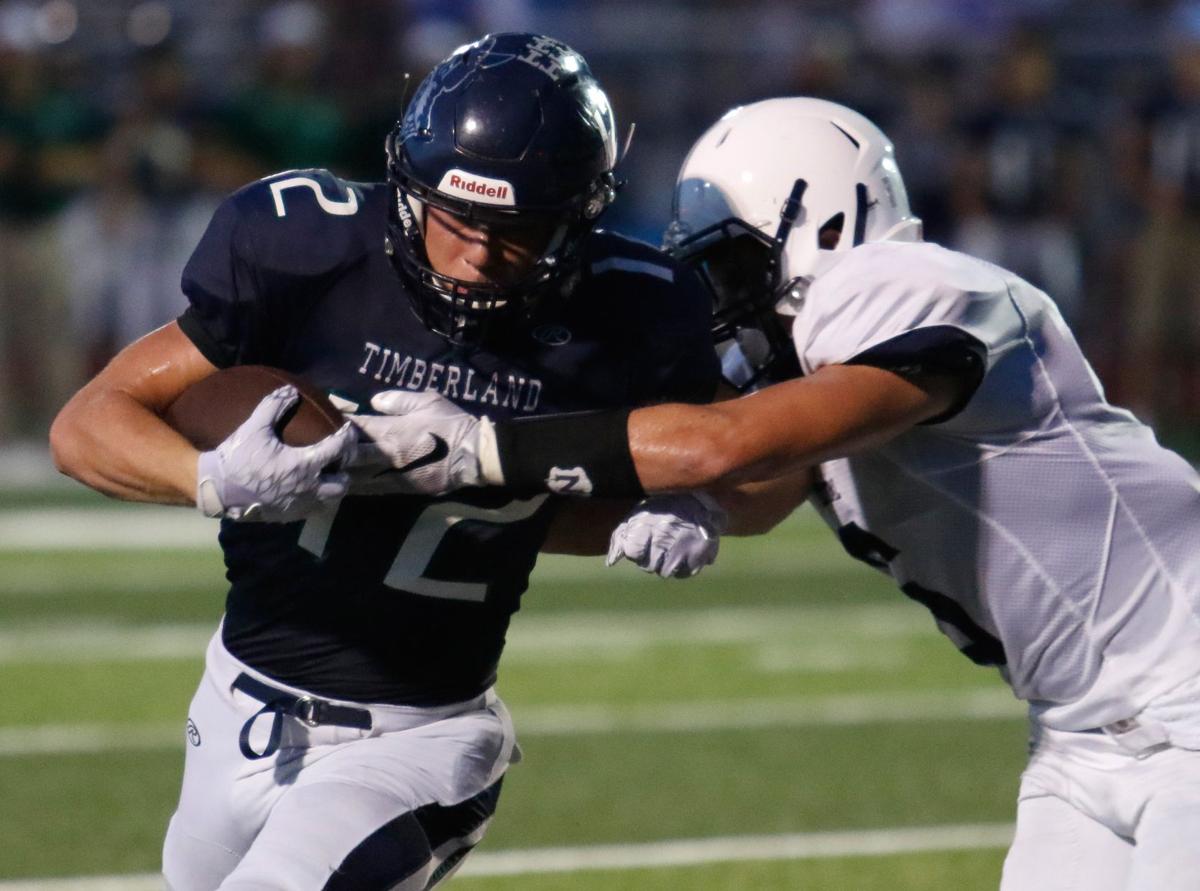 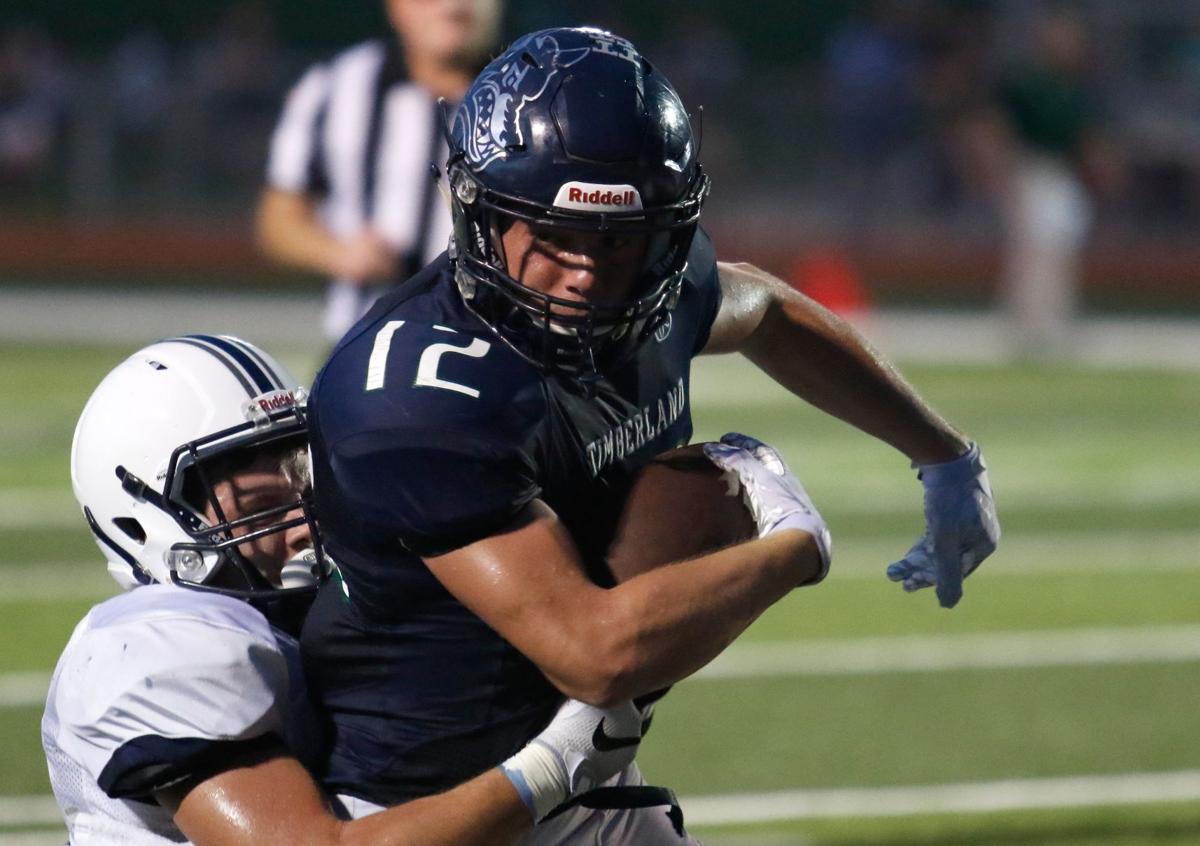 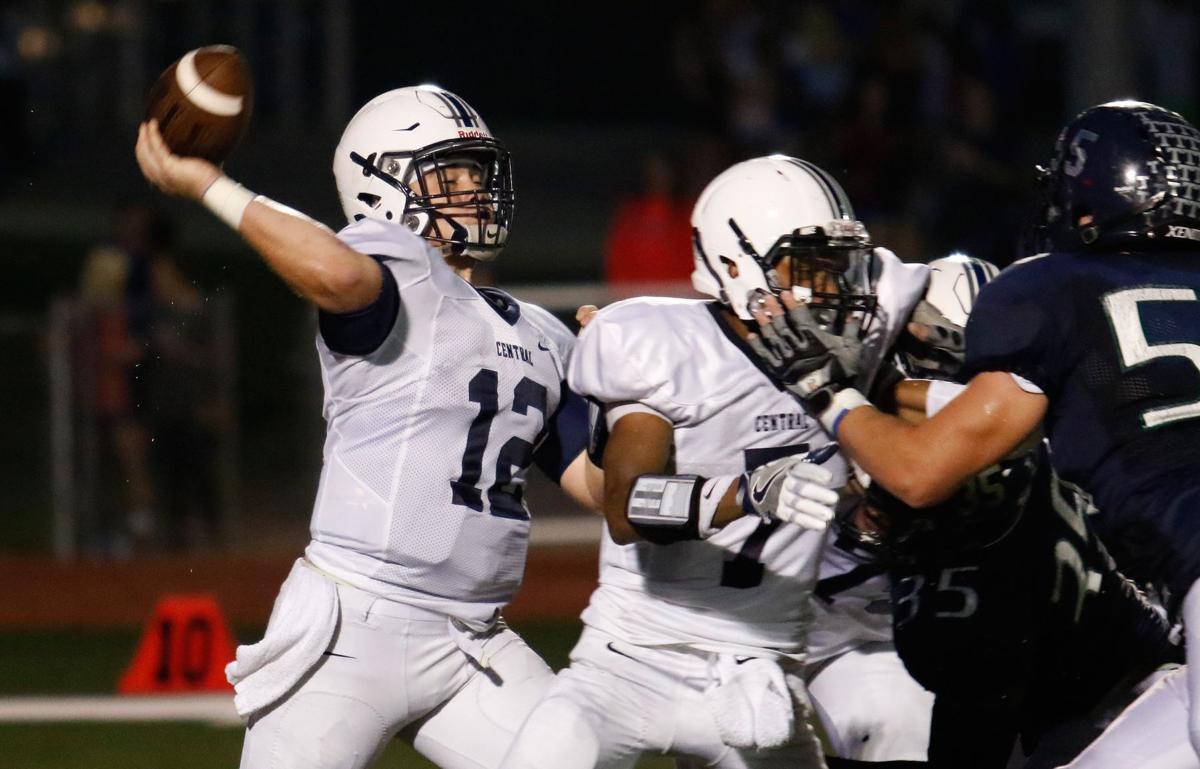 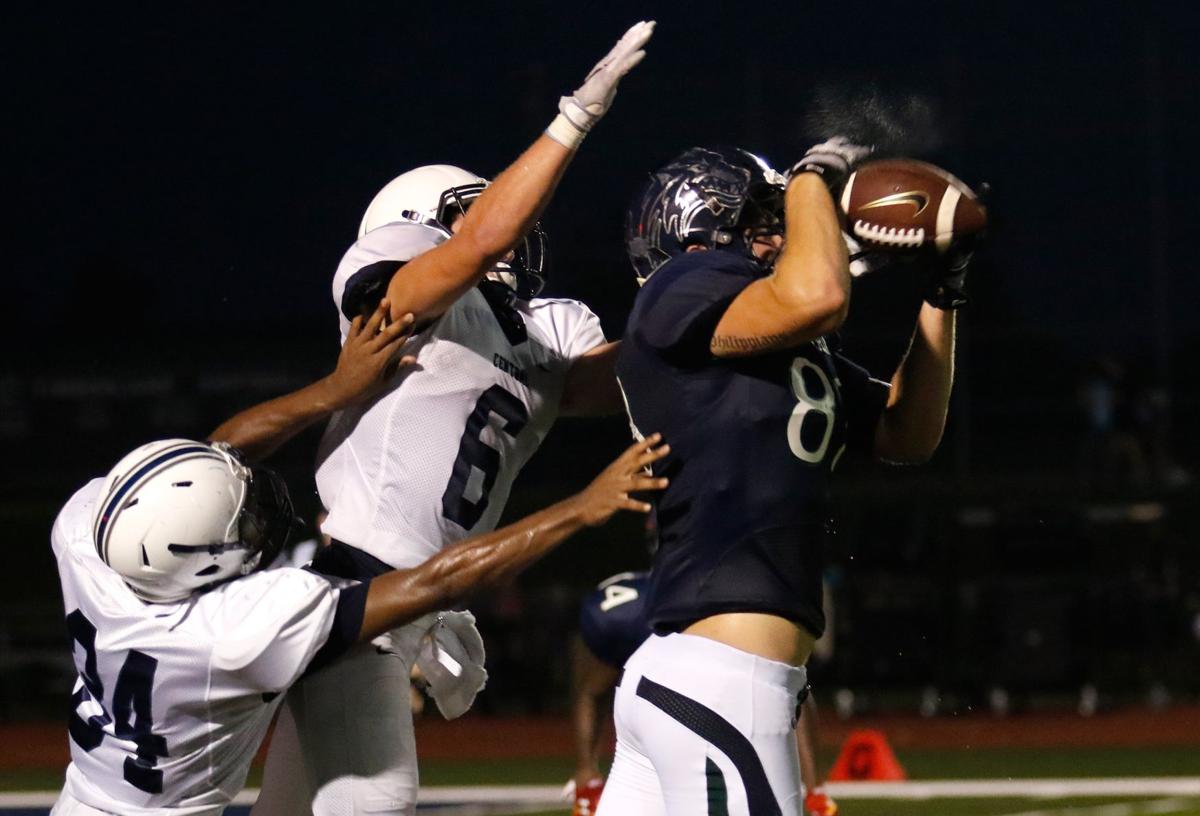 Timberland's Jake Papez (88) goes up for a pass under pressure from Francis Howell Central at Timberland High School in Wentzville, Mo., on Sept. 9, 2016. Michael Gulledge, Special to STLhighschoolsports.com 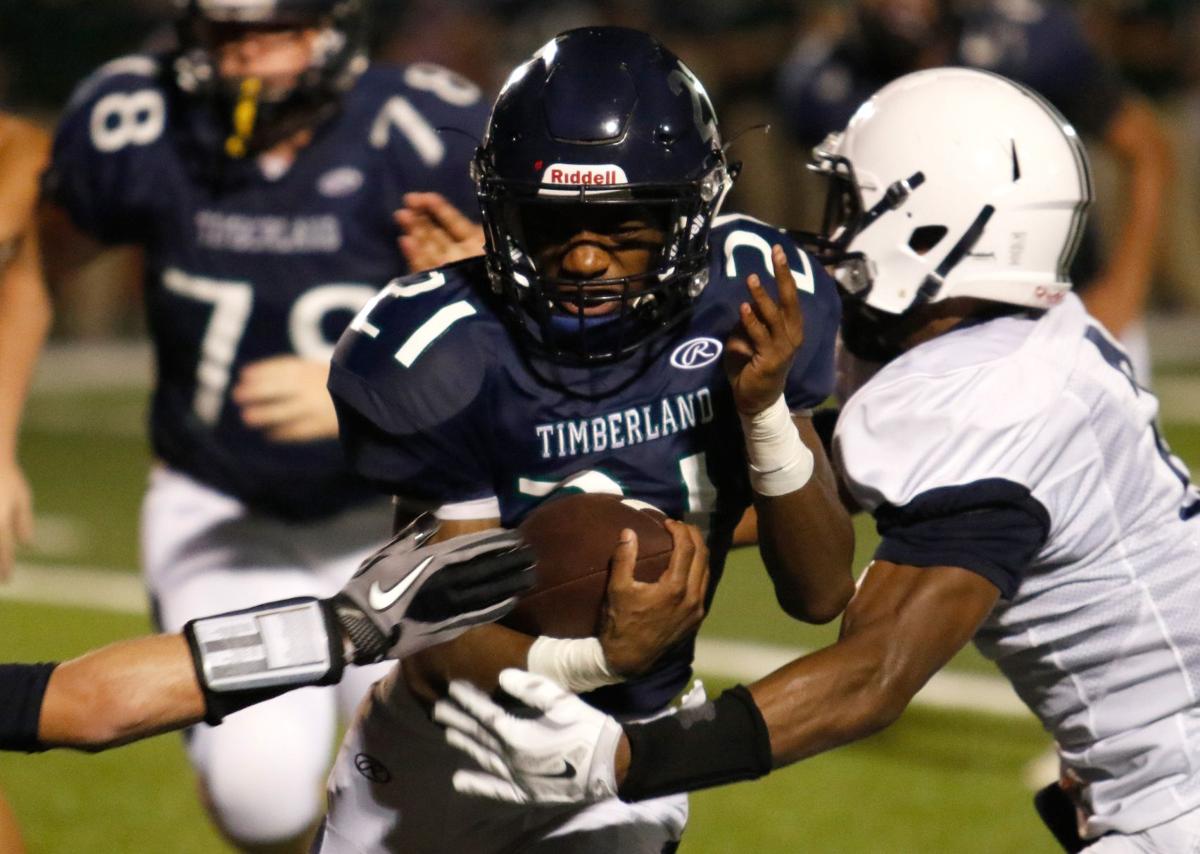 By Josh Hall | Special to STLhighschoolsports.com

WENTZVILLE • Anthony Henderson doesn’t have much experience at the quarterback position.

But after his second career start, the Timberland senior has shown he can get the job done.

Henderson threw for three touchdowns and ran for two as the Wolves improved to 4-0 with a 33-22 win over Francis Howell Central on Friday in a GAC South matchup.

“He’s done a great job stepping in,” Timberland coach Ed Gilreach said. “I couldn’t be happier with him right now.”

Henderson, who threw for 161 yards, took over as the starter in Week 2 after Grady Daniels suffered an injury. Henderson has taken reps under center in practice before, but hasn’t seen game action in his high-school career.

“It felt much better than my first start,” he said. “I felt a lot more comfortable.”

Henderson didn’t panic when his team needed him most. After Howell Central (2-2, 0-1 GAC South) pulled to within five points early in the fourth quarter, Henderson connected with Jonathan Honore for a 24-yard touchdown.

It looked as if Honore wouldn’t gain much yardage after he caught the ball in the backfield. But the 6-foot-2 senior fought his way through to the end zone to give Timberland a 33-22 lead with 7 minutes, 22 seconds left to play in the fourth.

“I just told (Henderson) to get me the ball,” Honore said. “The blocking was great. I just had to make something out of nothing.”

Honore followed with an interception on Howell Central’s ensuing drive and the Wolves were able to hold off the Spartans from there.

Howell Central had gotten the better of Timberland in recent years. Since 2010, the Spartans led the series 4-2, with every game being decided by 14 or fewer points. One of the Spartans' two wins last season was a 34-20 victory against Timberland, which improved to 4-0 for the first time since 2008.

“The kids have worked hard and we’re just trying to go 1-0 every week,” Gilreach said. “4-0 is a nice step for right now, but tomorrow morning when we wake up, we want to go 1-0 next week.”

It didn’t take long for the Wolves, who outscored their previous two opponents 101-15, to get going against their rival.

Henderson capped a 4-play, 59-yard opening drive that took just under two minutes with a 9-yard run to give the Wolves the early lead.

Howell Central punched right back. The Spartans went 73 yards on their first drive after Jackson Berk connected with Connor Riebel for a 25-yard score. Berk went back to Riebel on the two-point conversion to give Howell Central an 8-7 lead.

The momentum swung the other way shortly after.

“It’s a momentum game,” Gilreach said. “We talked to the kids about if something happened, not letting that momentum shift and being able to get it back.”

After the Spartans turned it over on downs from their own 34 late in the opening period, Timberland capitalized on the short field. Henderson found Brayden Hull for an 8-yard touchdown as the Wolves took a 13-8 advantage with no time remaining in the first quarter.

Timberland continued to take advantage of a short field in the first half.

Howell Central turned it over on downs from the Spartans’ own 40 and Henderson capped the drive with a 4-yard run to extend Timberland’s lead to 19-8 with 5:59 left in the second quarter.

“We’re not a big punting team, so we tried to be as aggressive as possible,” said Howell Central coach Pete Eberhardt, who served as an assistant coach at Timberland from 2013 to 2015. “We’re totally confident in our kids. Our kids believe going for it on fourth down, so we roll with it and try to do it as much as possible.”

Howell Central got back on track during the Spartans’ opening drive in the third quarter. Berk threw for 54 yards during the series and Cameron Hatten capped it off with a 9-yard run before punching it in for a successful two-point conversion to bring the Spartans within 3 points with 8:46 to play in the third.

Timberland responded when Henderson connected with Brett Hiatt for a 60-yard score. Henderson ran for the two-point conversion to give the Wolves a 27-16 lead with 2:19 remaining in the third quarter.

The Spartans were far from out of it.

On fourth-and-10 from the Timberland 40-yard line, Berck found Adam Lewis for an 18-yard pickup. After a series of penalties Spartans faced another uphill battle. But on fourth-and-goal from the Timberland 20-yard line, Berk connected with Michah Skebo in the corner of the end zone. The two-point conversion failed, but the Spartans once again pulled within striking distance, trailing 27-22 with 11:46 to play in the fourth.

That’s as close as Howell Central would get.

“They would come back and try to take shots at us and take the lead, but we stayed with it,” Henderson said. “We kept taking shots back. We stayed with them, we didn’t fold.”

Francis Howell Central's Connor Riebel (8) goes up for a pass under pressure from Timberland at Timberland High School in Wentzville, Mo., on Sept. 9, 2016. Michael Gulledge, Special to STLhighschoolsports.com

Timberland's Jake Papez (88) goes up for a pass under pressure from Francis Howell Central at Timberland High School in Wentzville, Mo., on Sept. 9, 2016. Michael Gulledge, Special to STLhighschoolsports.com