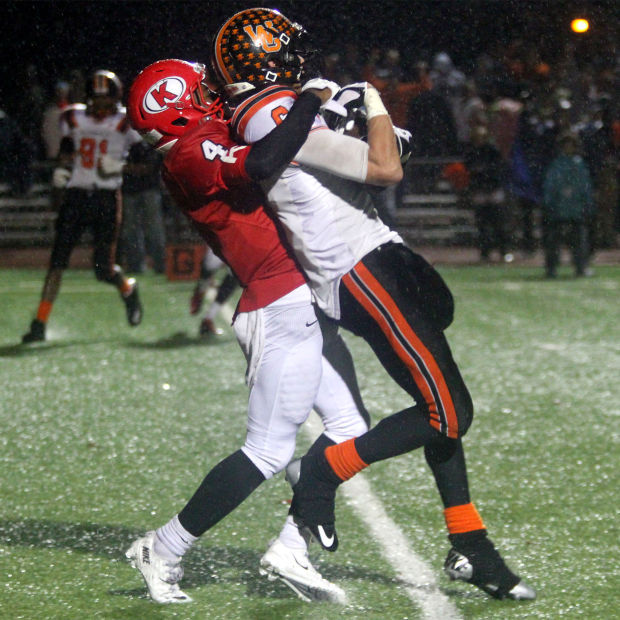 Cameron Hilton (right) of Webster Groves backs into the end zone in the arms of Eric Phillips of Kirkwood to score a touchdown during a Class 5 district championship game on Monday, November 11, 2013 at Kirkwood High School in Kirkwood, Mo. Paul Kopsky, STLhighschoolsports.com 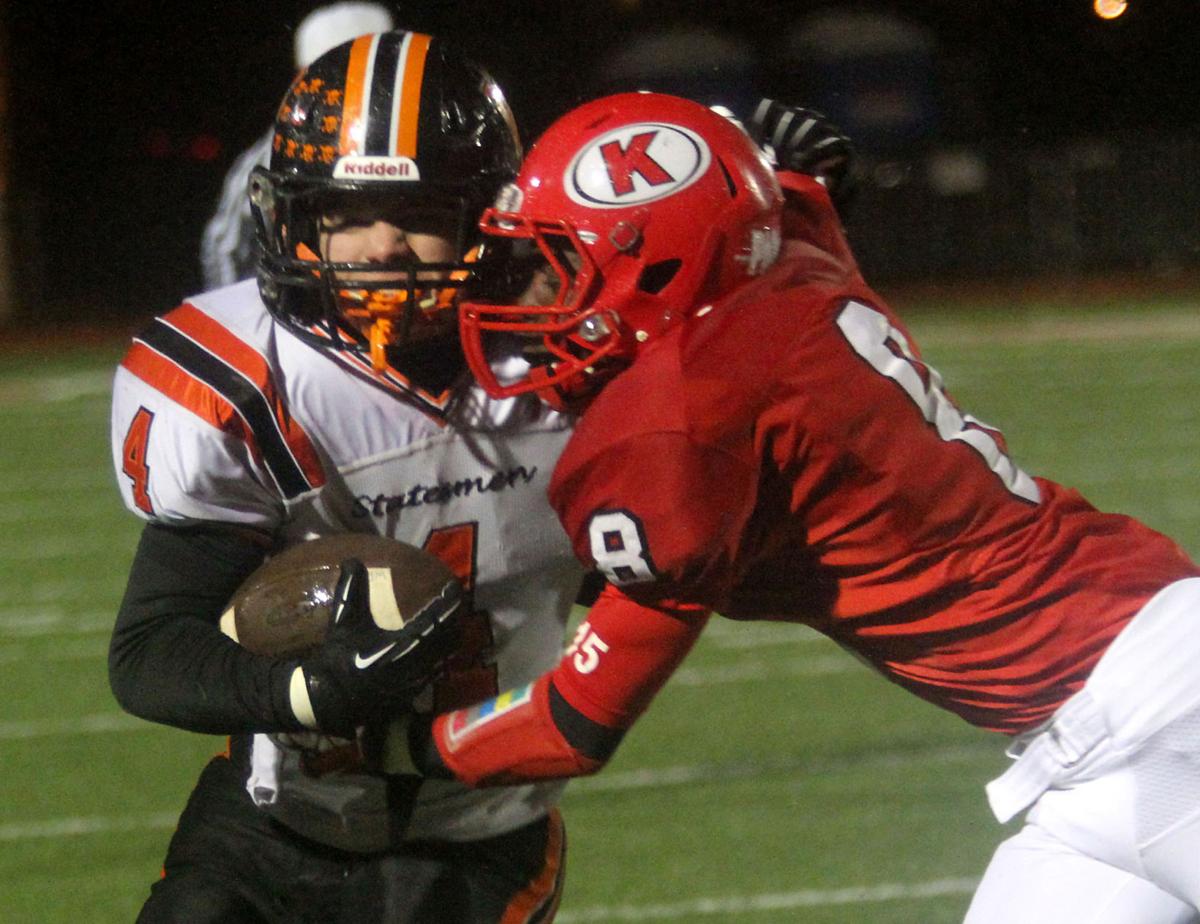 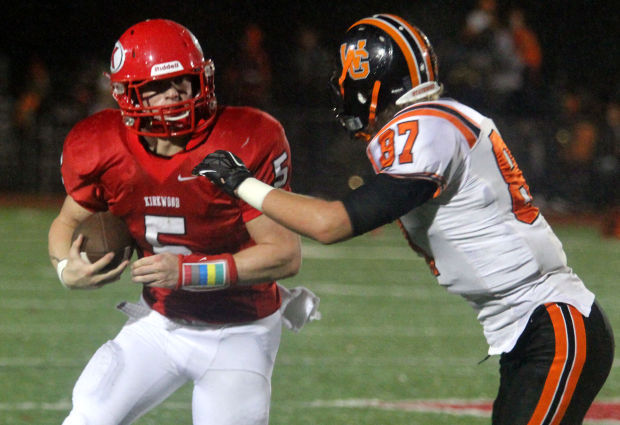 KIRKWOOD • The wind and sleet stung Cameron Hilton’s face. He didn’t care. He was in heaven.

The junior defensive back/quarterback/wide receiver for Webster Groves moshed and mobbed with his teammates and an army of students in the middle of Kirkwood’s field as Webster Groves survived a thrilling Kirkwood rally to escape with a 21-19 victory in the Class 5 District 2 championship game Monday night at Kirkwood.

Webster Groves (8-3) advanced to the quarterfinals, where it will meet Jackson (9-3), which knocked off Vianney on Monday night.

The Statesmen were on this same field a season ago when the Pioneers pulled out a 21-14 win in this same round before going on to win the Class 5 title, their first. That loss stung Webster Groves, which has won four state titles. The Statesmen ruminated on it all year.

But Kirkwood opened the game clicking. The Pioneers scored on their first drive when senior quarterback Blake Goddard connected for his first touchdown of the season on a 5-yard pass to Eric Phillips with 6 minutes 3 seconds remaining in the first quarter.

Webster Groves' offense was stagnant in the first half. It had three offensive possessions, picked up one first down, punted twice and let the clock expire at the half. But it went into the break tied at 7 because Hilton picked off Kirkwood’s Wil Hadler and raced 98 yards with 4:43 left in the second quarter.

“That was huge going in 7-7 at the half,” Webster Groves coach Cliff Ice said. “They played a great first half, we didn’t and it’s 7-7. If we play football, how can the second half go?”

The Pioneers turned the ball over again late in the first half as Goddard bobbled a shotgun snap inside the 10-yard line and Webster was able to jump on it.

“We just thought if we eliminate those two miscues down there in the red zone, if that one doesn’t go for a score and we finish a drive, it’s a different result,” Kirkwood coach Matt Irvin said. “Credit to them, they made the play.”

The second half opened much like the first as Kirkwood once again pounded its way down the field. Jerod Alton was the featured back as he scored from 4 yards out to put the Pioneers up 13-7. The point-after attempt was botched on a bobbled snap. Alton rushed 11 times for 106 yards.

Webster Groves’ offense finally found some life on the ground as Hilton, quarterback Rob Thomspon and DJ Johnson churned out the yards on the Statesmen’s second possession of the second half. Webster Groves went 79 yards in five minutes and took a 14-13 lead when Thompson connected with Hilton on a 16-yard touchdown pass with 11:54 remaining in the fourth quarter.

The Statesmen pushed the lead to 21-13 when Johnson rushed in from 22 yards out with 7:44 to play. He finished with a team-high 76 yards on the ground.

But Kirkwood answered. Goddard converted on a fourth down and shot inside the Webster Groves 2-yard-line, then punched in the touchdown on the next play with 2:39 remaining.

The 2-point conversion failed when the shotgun snap was bobbled by Goddard and the Webster defense swarmed him. Goddard finished with 42 yards rushing.

Kirkwood started its final drive on its own 15 with 54.9 seconds on the clock and was able to get as close as the 44-yard-line. But Hadler’s pass went into the wind and was knocked down by the Statesmen defense moments after the final buzzer sounded.

Webster Groves was able to hang around and win this game because its defense found a way to bend but not break. Linebacker Bri’on Sanders had 21 tackles to lead the way.

“They made plays when they had to,” Ice said of his defense.

Cameron Hilton (right) of Webster Groves backs into the end zone in the arms of Eric Phillips of Kirkwood to score a touchdown during a Class 5 district championship game on Monday, November 11, 2013 at Kirkwood High School in Kirkwood, Mo. Paul Kopsky, STLhighschoolsports.com