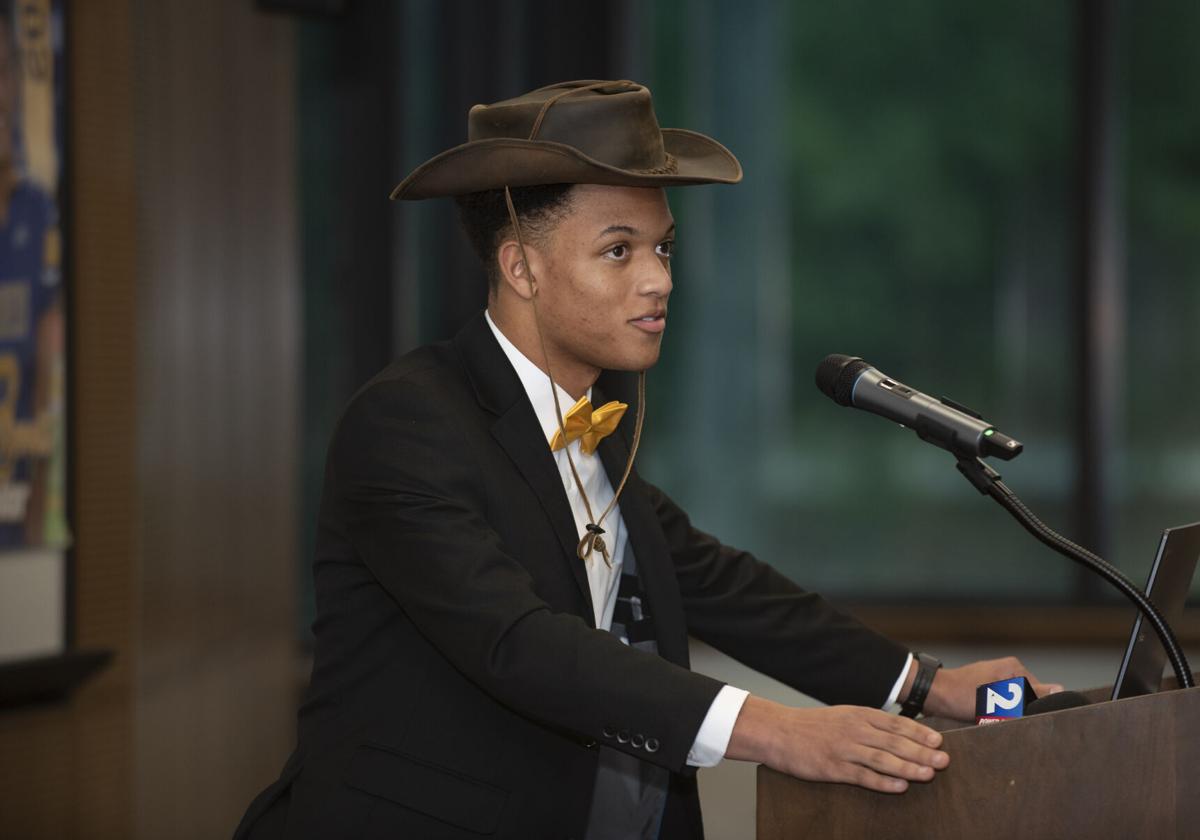 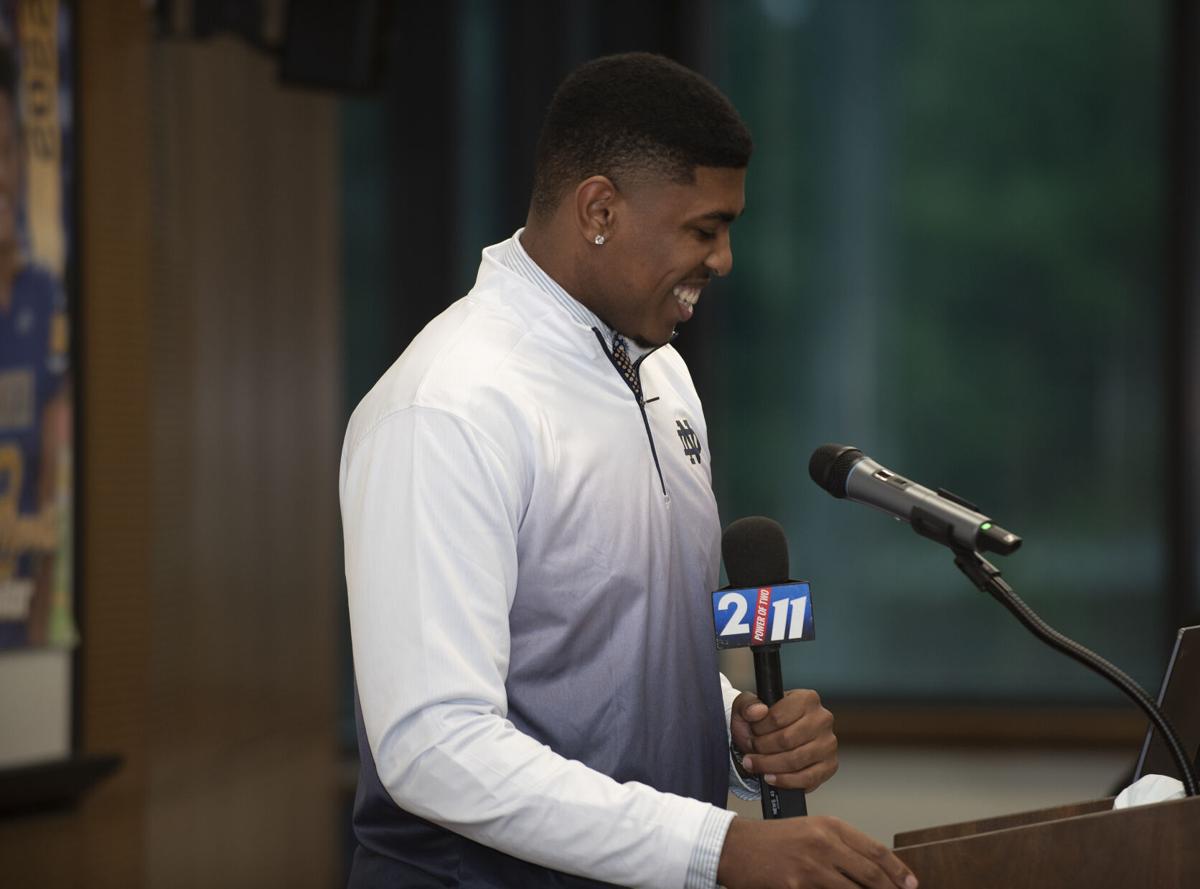 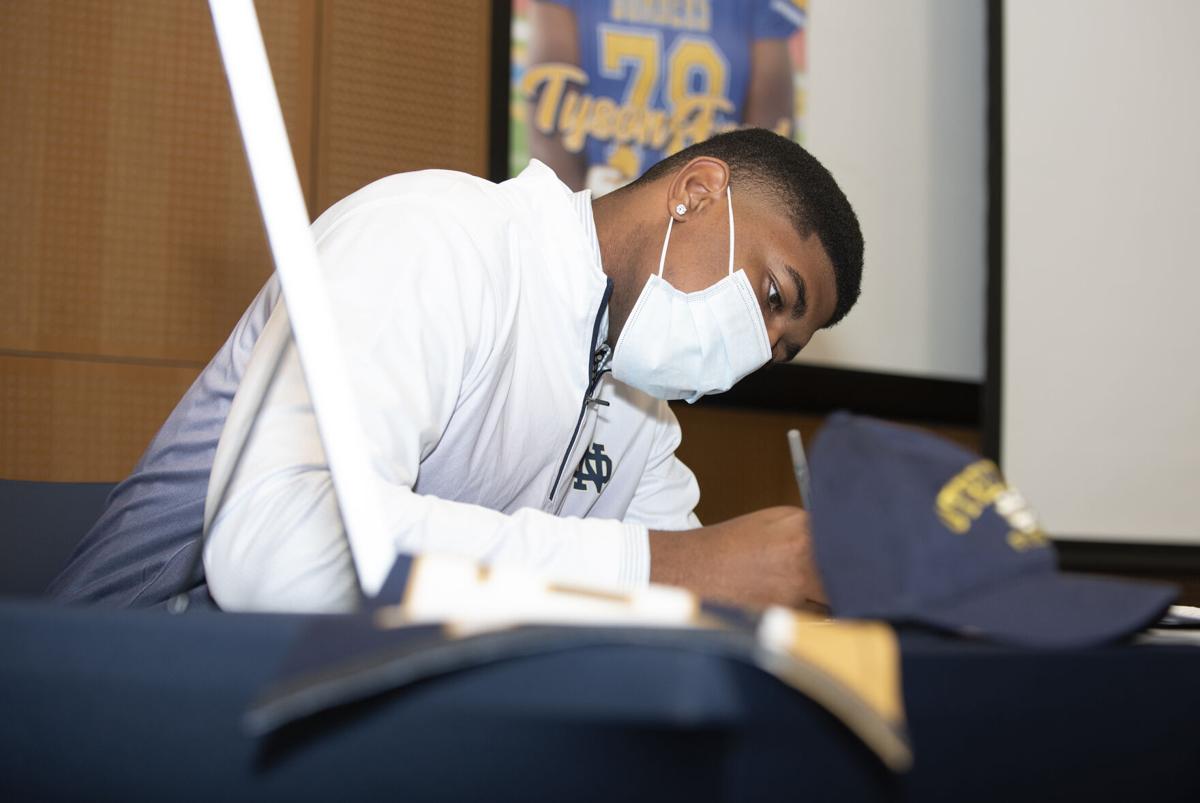 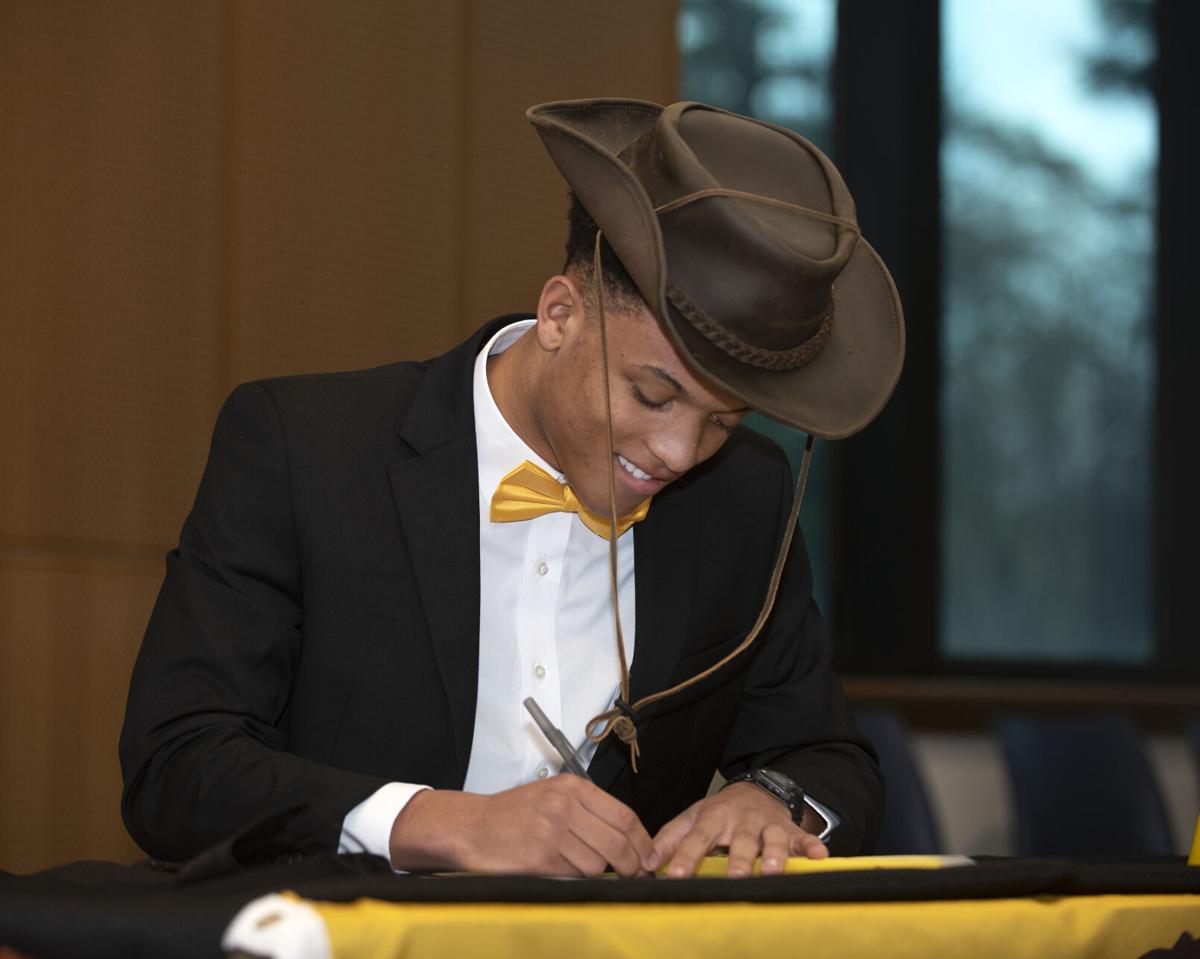 LADUE — John Merritt was glad he was masked.

The tears couldn’t run down his face.

The John Burroughs football coach the last nine years, Merritt has been a part of several signing day ceremonies.

But this was the first that featured his son.

The 6-foot and 180-pound Caleb is a wide receiver by trade but delivered an emotional bomb no opponent could replicate.

Standing before a small assembly of family and friends to celebrate him and teammate Tyson Ford at Burroughs’ Newman Auditorium, Caleb thanked his parents, siblings and coaches for helping him along the way. In thanking John, his father, Caleb uttered words that would turn nearly every parent into a puddle.

“If the only thing I accomplish the rest of my life is being as good a father to my kids as he was to me, I’ll be fine with that,” Caleb said. “That’s been my goal my whole life. I know that so many kids have issues with their family and their fathers. I just really try to never take it for granted how special my dad is to me and how he’s been able to coach me through football and my life.”

The past four years John has had to walk the fine line between father and coach. On Wednesday, he had a Wyoming T-shirt under his blazer. He also asked Burroughs assistant head coach Jud Dieffenbach to be the ringleader for the ceremony so he could take it in as a dad.

“I’ve gone through this process so many times with so many other kids, it’s so exciting to see it get done for him because I know how much it means,” John said.

Caleb decided in sixth grade he was going to play Division I football and that nothing would get in his way. So he would wake John up and the two would trek to the Burroughs weight room every day at 6 a.m. to lift. That’s how it went for years on end.

Wednesday was a culmination of those days and so many others that have been used in pursuit of this dream.

“It’s cool that we finally did it after all the hours we put in,” Caleb said. “It’s really cool to be committed to something for real and to get the opportunity to do what I love the most on the next level.”

John said Caleb and Ford are the 49th and 50th players from his time at Burroughs to sign to play college football.

Few have ever gone as big as Ford. The 6-foot-6 and 245-pound defensive end signed with Notre Dame. He stayed true to his commitment despite former head coach Brian Kelly resigning to take over at LSU in November. Notre Dame wasted little time naming defensive coordinator Marcus Freeman its next coach. When it did, Ford was even more convinced he’d found the right fit.

“Honestly, I feel more comfortable going there with Coach Freeman being there,” Ford said. “I really like Coach Freeman, he’s the one who recruited me. I have a good relationship with him.”

There are certain perks that come with signing with the Irish. The signing celebration began with a video Notre Dame made for Ford that included a string of fans praising his abilities. Notre Dame graduate, college football hall of famer and pro bowl quarterback Joe Theismann made a cameo appearance.

The video referred to Ford as a “Bonecrusher,” to which Theismann said, “I’m familiar with that.”

Theismann famously had his leg broken in a game by Lawrence Taylor in 1985.

The nickname was news to Caleb and John, who had no idea that Ford crushed bones. Ford said it came from a story during his eighth grade year. He was at practice and bull rushed an offensive lineman who then fell backwards awkwardly and broke both wrists.

“They knew about that,” Ford said with a smile.

What they might not have known was John had to convince Ford to pass on the swim team to play football as a freshman. Ford entered Burroughs with every intention of becoming a top-tier basketball player. He was through with football and thought joining the swim team would be beneficial.

“He was sure he was the next great Tim Duncan,” John said. “I said, ‘You might be, but I think you could be pretty good at this football if you just gave it a shot.’ ”

He did, and now Ford is graduating early and enrolling at Notre Dame in January. Caleb and Ford were so giddy for Wednesday that neither of them could sleep.

“I was rolling over and checking the time all night,” Caleb said. “I’m more than excited to be here right now.”

Wednesday was the end of one phase of Caleb and Ford’s journey and the start of the next. Caleb will finish out his senior year and expects to head to Wyoming in early summer. It’ll be the first time in four years that John won’t be his head coach. He’ll just be dad and that will be more than enough.

“He’s always going to be there for me,” Caleb said. “He’s already trying to help me as much as he can. We’re still getting all our work in.”