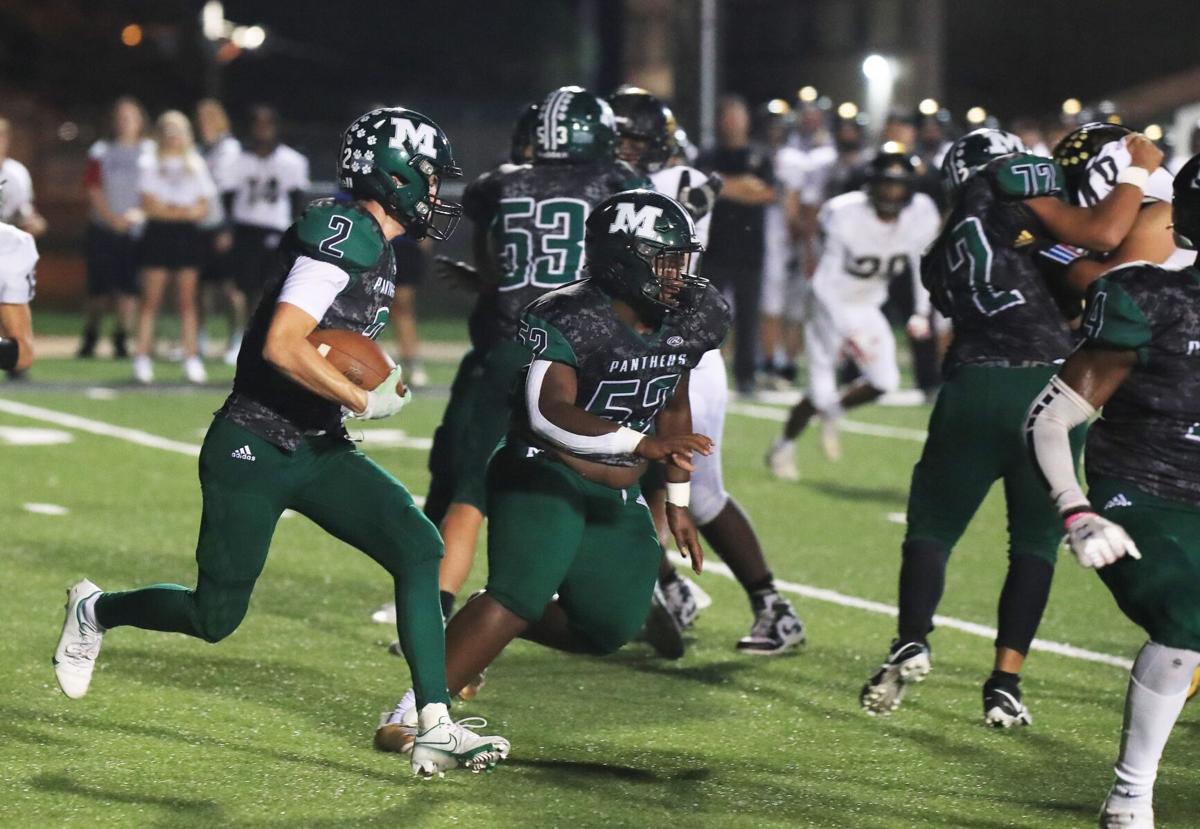 Eric Ohmer (2) of Mehlville follows his offensive line against Oakville in a football game at Mehlville High School in Mehlville, Missouri on Friday, October 8, 2021. Paul Baillargeon, Special to STLhighschoolsports.com 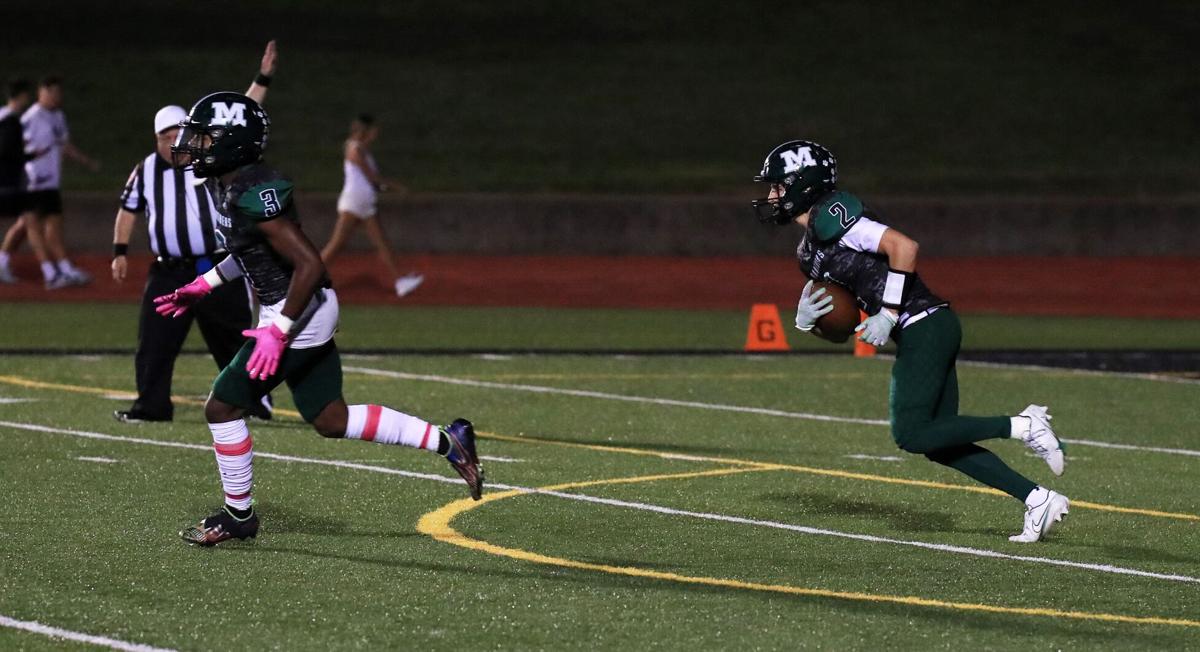 Mark West of Mehlville (3) provied the lead blocking as Eric Ohmer (2) take the ball 91 yards for an opening game kick off return against Oakville in a football game at Mehlville High School in Mehlville, Missouri on Friday, October 8, 2021. Paul Baillargeon, Special to STLhighschoolsports.com

By Warren Mayes | Special to STLhighschoolsports.com

Before the fans could settle in to munch their popcorn, Mehlville senior Eric Ohmer got them back on their feet with a dazzling 91-yard kickoff return for a touchdown to start the game.

The Panthers never looked back.

Mehlville continued to dominate the South County rivalry. The Panthers have won five in a row and six of the last seven against Oakville. Mehlville's current win streak is the longest for either team in the series since 2000.

"I'm a little teary-eyed," said Mehlville coach Kent Heinemann, who is an Oakville graduate. "I'm so proud of my seniors. This was a big game for them. They went out and beat a pretty good Oakville team. I've been on the other side of this rivalry. It is an awesome, healthy rivalry. It's always a good game. I'm really, really happy with the team."

Running back a kick for touchdown is getting to be old hat for Ohmer. It was his third one this season.

"Honestly, I didn't expect them to kick it to me," Ohmer said. "But as soon as I got it, I knew I'd be gone for a touchdown.

The fleet Ohmer took the kickoff at the Mehlville 9-yard line. He went up the middle and then veered right with a cat quick move before racing to the end zone for a heart-stopping 91-yard kickoff return and a 7-0 lead.

"They wedge guys in the middle did a great job of clearing a hole," Ohmer said. "I took it to the right and had one man to beat. I did and I scored. To start off a game like that is great. It's energetic. It helps set the mood for the whole game."

The Tigers went three and out and had to punt. A high snap sailed over sophomore Anel Jakubic and he scrambled back to get the ball. Mehlville recovered at the Tigers' 12.

On the Panthers' first play, senior Mark West scored on a 12-yard run and the Panthers led 14-0 with 9 minutes and 31 seconds left in the first quarter.

"I want to thank Coach Heinemann for that," West said. "He said he was going to give me the ball on the first play of the drive."

Heinemann noted West scored on his own.

"We didn't block anybody on that play. Mark made a move and got in the end zone. Really two big plays was about all for us in the first half," Heinemann said. "We really couldn't get our running game going. That's a pretty good Oakville team."

Turnovers plagued the Tigers, who lost two fumbles and had three passes picked.

"When you give the other team too many opportunities, it's hard to dig yourself out of that hole," Oakville coach Mike Genge said. "You can't keep giving them the ball. That's the name of the game. You have to learn from it. We're young. We're in the growing process. We're still learning how to be good."

Everding intercepted a pass on the second play of the second quarter, giving the Panthers the ball at the Oakville 37. Freshman quarterback Adam Kilburn has thrown six interceptions this season. However, the Tigers defense thwarted the Panthers, who had to punt.

The Tigers had one good drive in the first half. Oakville started on its 19 and moved the ball to the Mehlville 19 in 10 plays. On a fourth-and-1, sophomore Eric Venable fumbled, turning the ball over the Panthers with 3:03 left in the first half.

Oakville took the kickoff to begin the third quarter and marched into Mehlville territory but lost the ball on downs.

Mehlville pounced. A key play on the drive came when West rumbled 34 yards to the Oakville 11. West broke numerous tackles on the run. Ohmer took a handoff and sliced over the right side of the line and in for his second touchdown. The Panthers went up 21-0 with 4:01 left in the quarter.

"That one was easy," Ohmer said. "The line cleared a path for me. I just took it untouched into the end zone. This one was a big one for us. It means a lot. We've been waiting for this all year and to end like this is special."

Another turnover stymied the Tigers. Oakville converted a fourth-and-2 to the put the ball on the Mehlville 14. However, the center snap hit the motion back for a fumble. The Panthers recovered with 11:25 remaining to be played.

Ohmer and West each intercepted a pass in the fourth quarter for Mehlville. West was wearing a big chain with a large capital 'M' after the game.

"You get to wear it after a turnover," said West, who had two interceptions taken away on a trapped ball and a penalty. "I like it."

Genge noted his Tigers just were unable to get it done in the loss.

"They outplayed us," Genge said. "We didn't do enough to win. We made some key mistakes and they capitalized on them. That's been our Achilles heel all season. We'd drive down the field and then not finish."

"The effort of the defense honestly was the best we've had this year," Kaemmerer said. "We all just meshed together really well. We're like a little family. When we work together to stop the offense, it feels amazing. When someone gets a sack, we all feel like we got a sack. It's our first shutout of the season. Honestly, I wasn't expecting it but it happened and I'm so glad we did it."

It was the Chris Cotton show on Friday night at De Smet.

Lindbergh leans on Hnilo to hold off Hazelwood Central

FLORISSANT — The joy that coursed through Jake Hnilo overtook any pain he was feeling Saturday afternoon.

IMPERIAL — It was the play of a lifetime, and Seckman High senior Matthew Bonebrake made the most of it.

Eric Ohmer (2) of Mehlville follows his offensive line against Oakville in a football game at Mehlville High School in Mehlville, Missouri on Friday, October 8, 2021. Paul Baillargeon, Special to STLhighschoolsports.com

Mark West of Mehlville (3) provied the lead blocking as Eric Ohmer (2) take the ball 91 yards for an opening game kick off return against Oakville in a football game at Mehlville High School in Mehlville, Missouri on Friday, October 8, 2021. Paul Baillargeon, Special to STLhighschoolsports.com