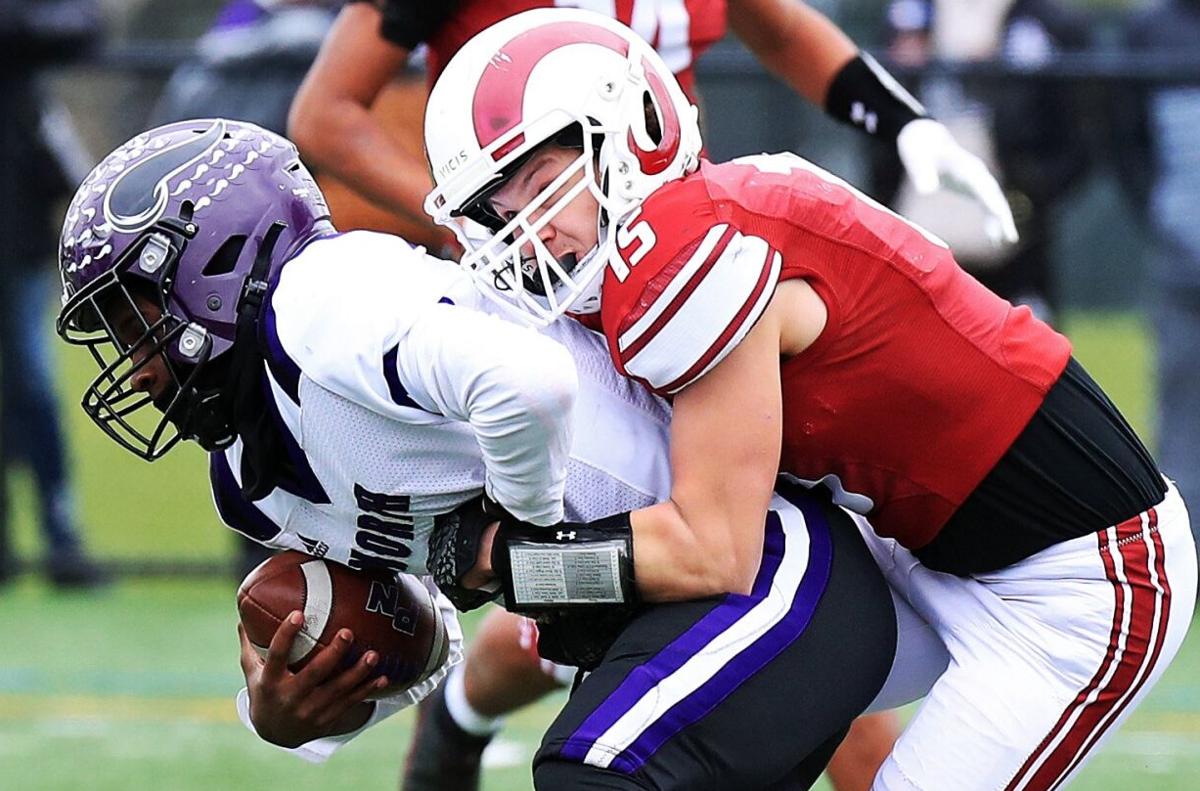 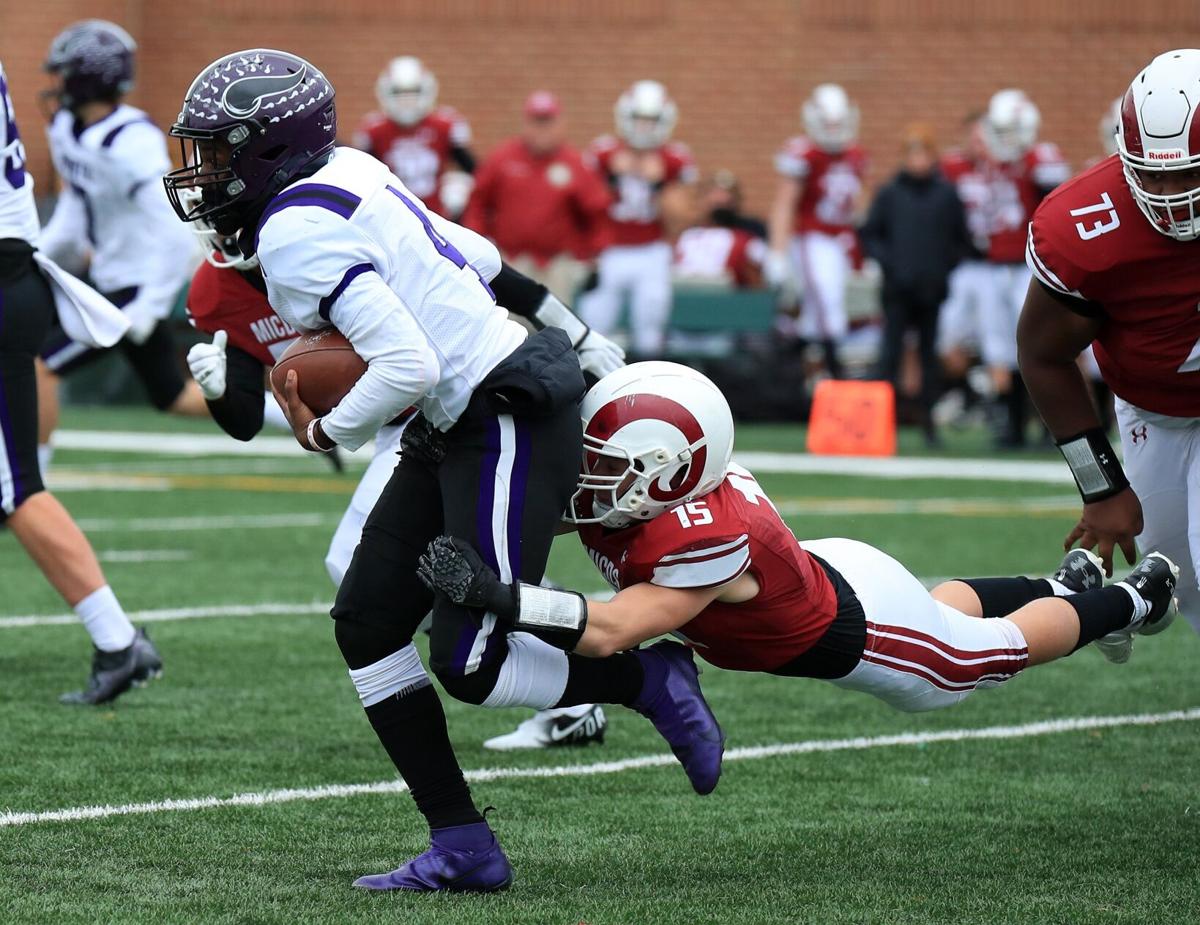 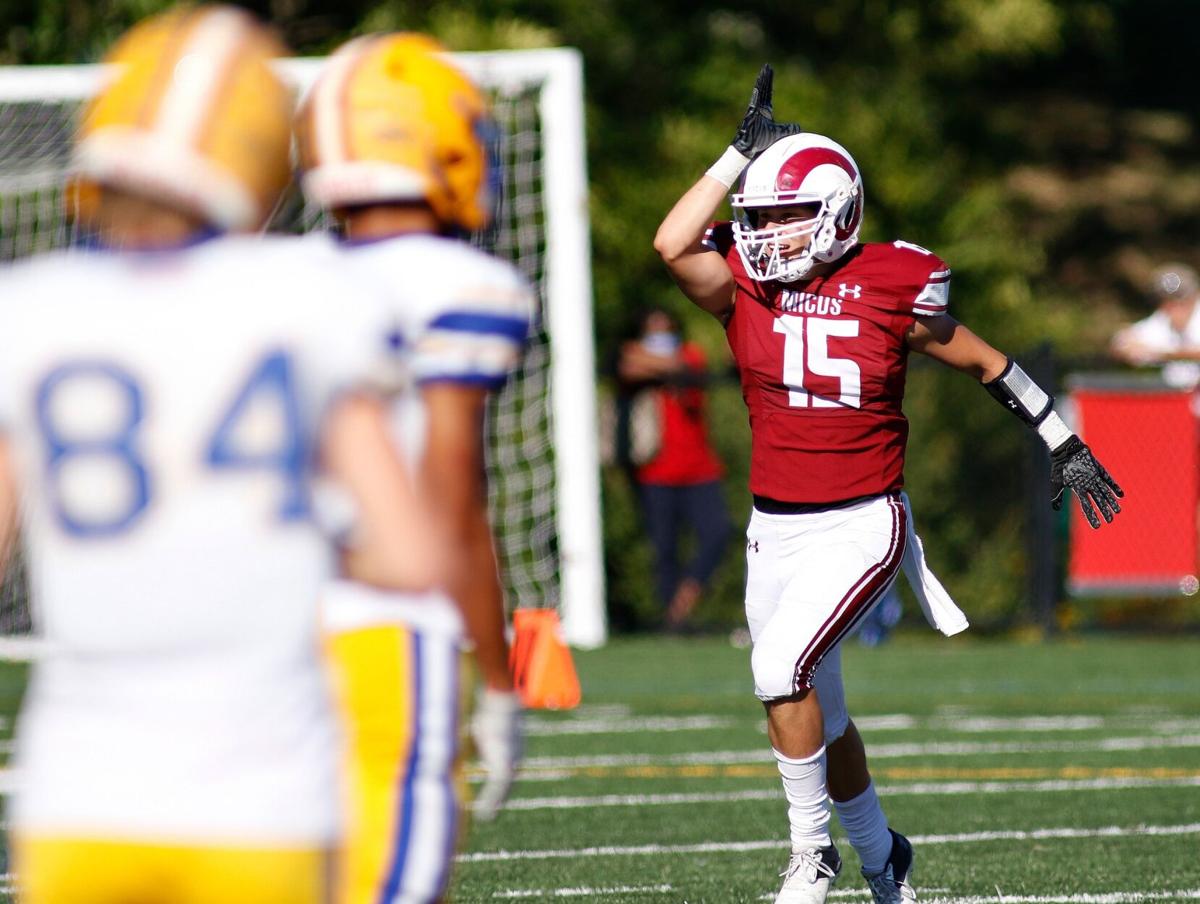 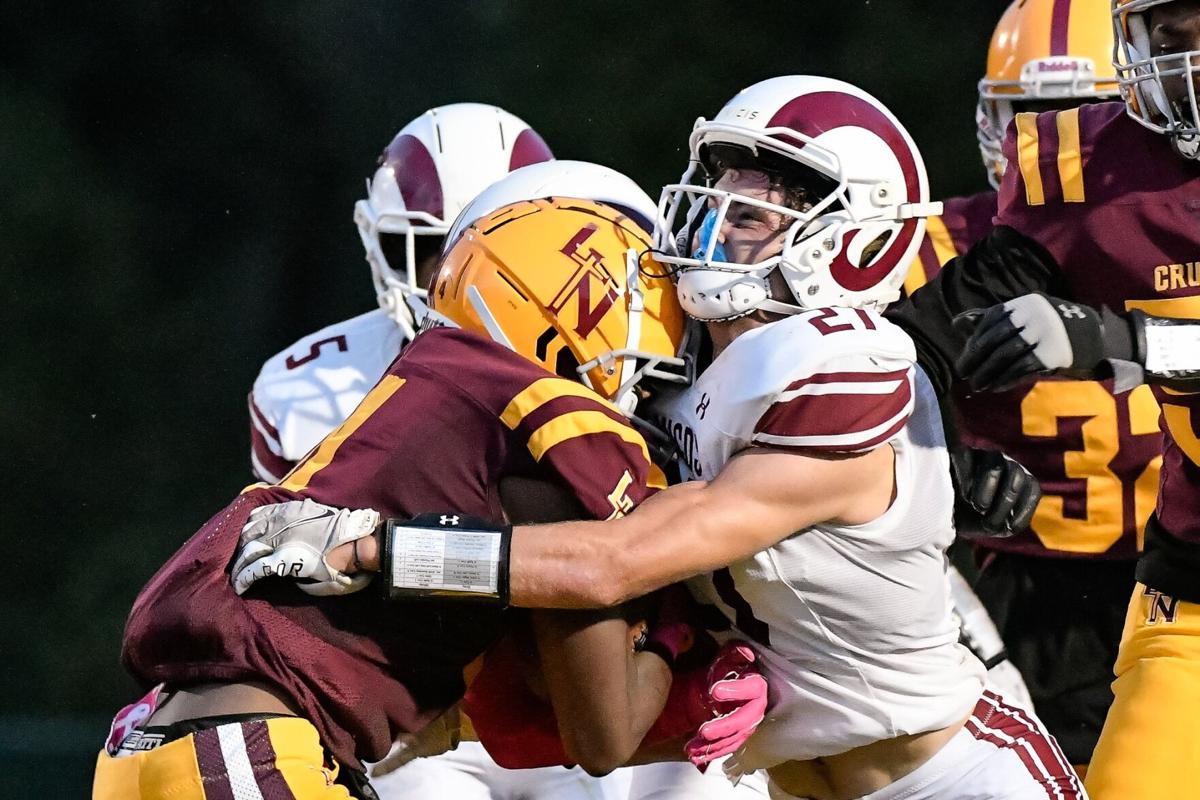 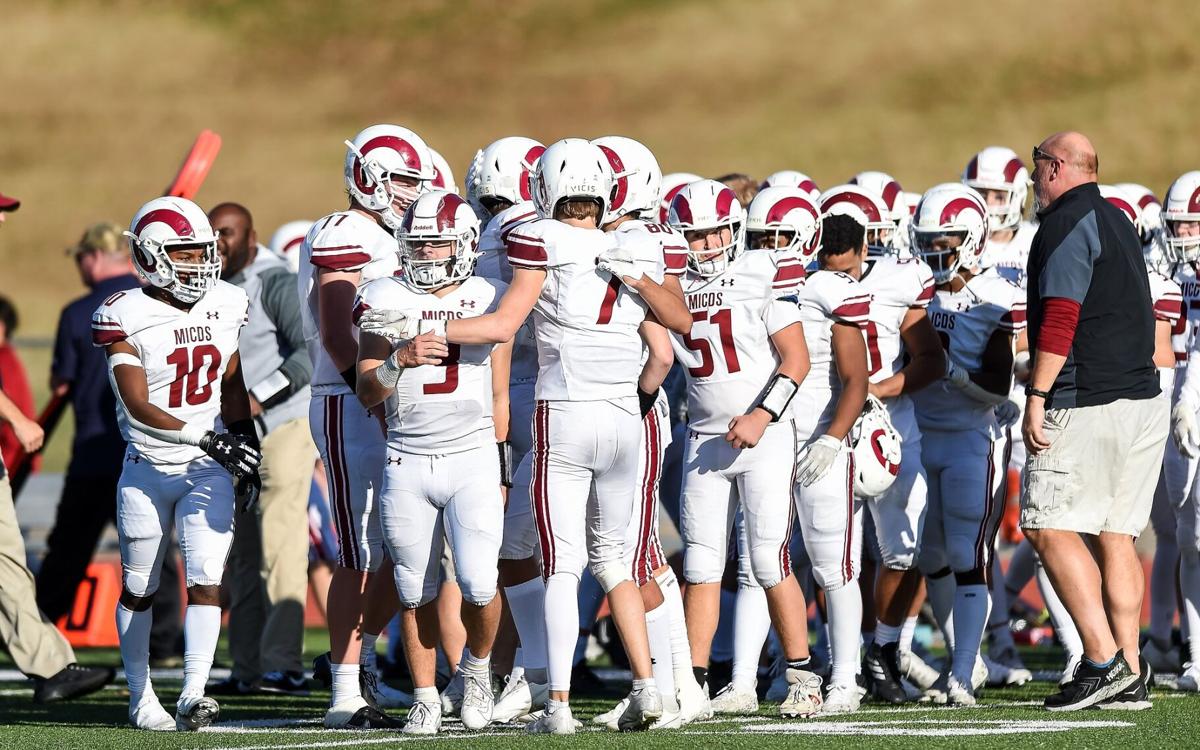 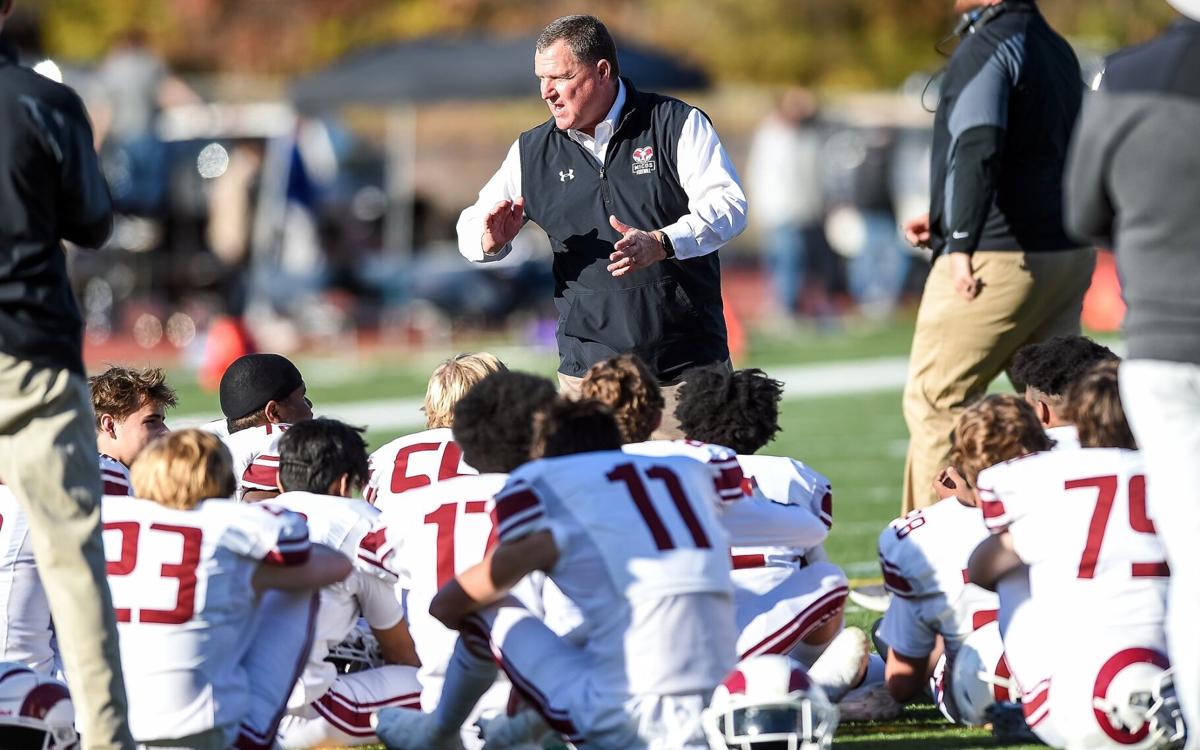 LADUE — Gus Baisch never felt so down after a win.

A playoff win at that.

A senior linebacker for the MICDS football team, Baisch and his teammates had just pulled out a thrilling 22-20 win over St. Dominic to advance to their second Class 4 semifinal in a row and the third in four years. You’d have never known it the way the Rams reacted.

The root of the reaction was the game did not go the way the Rams believed it would.

MICDS had beaten St. Dominic by more than a two-touchdown margin in their three previous matchups the past two seasons. The Rams expected more of the same last week and it was anything but.

“It was a battle. You have to appreciate what St. Dominic brought to the table,” MICDS coach Fred Bouchard said. “It was the third time we’d played them in thirteen months. That familiarity was probably something that gave them confidence.”

The No. 2 small school in the STLhighschoolsports.com rankings and the No. 2 team in the Missouri Media’s Class 4 poll, MICDS (12-0) had not been pushed to the brink since Week 2, when it escaped Park Hills Central with a 59-52 win. That night senior quarterback Reagan Andrew scored the game-winning touchdown on a 2-yard run with 10 seconds to play. Over the next 10 weeks the Rams were simply too dominant for their opponents to hang all the way until the end.

St. Dominic did MICDS a favor by making the Rams sweat until the final whistle.

“I’m looking at it after the game, it was OK to have to grit and battle,” Bouchard said. “At the end of the day I don’t think that ever hurts a football team. The key is to keep advancing. It doesn’t hurt us to have to battle.”

In fact it should only sharpen the Rams focus as this week brings an even bigger test.

The No. 1 team in the Class 4 poll, Smithville (11-0) is on a mission to break through the semifinals and play for a state championship for the second time in school history. The Warriors were nearly there last season when eventual champion Helias pulled out a thrilling win in the final seconds of their semifinal showdown. In 2018, Smithville lost in the semifinals at MICDS as the Rams went on to finish as the Class 4 runner-up to rival Ladue.

“They had like 20 returning starters from a semifinalist,” Bouchard said. “They’ve beat all comers this year.”

As much of a scare St. Dominic threw into MICDS, Smithville got a nose full of smelling salts from Lincoln College Prep in its quarterfinal last week.

The Warriors forced four turnovers inside Lincoln College Prep’s 20-yard line, including two fumble recoveries inside the 10. Smithville won 29-14. It’s the second-tightest margin of victory for the Warriors this season after a 20-10 win over Platte County. If just two of those possessions end with touchdowns and not fumbles, maybe Lincoln College Prep is the one marching toward the championship game.

Bouchard expects Smithville will come out playing like its hair is on fire after last week’s tight finish.

“When you’re in the semifinals you don’t get to play the Little Sisters of the Poor football team,” Bouchard said. “You’re going to play a battle-tested football team that has earned their way here. We have to play our best football, too.”

One of the biggest keys to MICDS surviving St. Dominic was it adjusted to some new things the Crusaders threw at them offensively. Senior defensive back Bjorn Sjogren led the team with 12 tackles, many of which came after the MICDS staff switched some things around.

“We made an adjustment midgame because they kept running this formation,” Sjogren said. “The adjustment to put me on the edge. It was a good position for me to get into the backfield.”

The 6-foot-2 and 175-pound Sjogren had himself a whale of an afternoon. Not only did he have a dozen stops, he had a sack and intercepted what would have been the game-tying two-point conversion.

“Throughout the whole game he was positioning our secondary in the right place,” Bouchard said. “Bjorn was a catalyst for that. Bjorn and (senior defensive back) Jack Hayes did a nice job providing run support on a team that was trying to find that edge on us.”

Those two will be critical Friday afternoon. Smithville has made its hay this season with an outstanding rushing attack that wears its opponents out.

The Warriors want to grind the opposition into bits all game and then drop the hammer in the fourth quarter.

“They have a really disciplined O-line, they’re really well coached,” senior linebacker Kai Tschudy said. “We have to fight that, we have to stay strong and know our assignments.”

After coming so close to turning in their gear, the Rams have embraced this week of practice. They too are in their third semifinal in four seasons and it would be easy to assume that’s just the natural order of things. Last week reminded them it’s not, and they’re making the most of it.

“It’s a complete blessing coming out here,” Tschudy said. “Not every team gets to be out here with their friends this late in November. I feel lucky and really happy to be out with these guys.”

The Flyers are one victory from retaining the Class 6A state championship they won in 2019.

The Cadets scored 31 points off six turnovers and won the fourth state title in program history — all since 2014.

The Rams led 36-20 but couldn't hold off the Warriors in an attempt to make a third title game in four seasons.

A 95-yard touchdown run after a fumble recovery in the fourth quarter helped Holt earn a spot in the Class 5 state final.

The only thing that could slow St. Mary’s senior Kevin Coleman down was a pregame meal.

ST. PETERS — AJ Harris will get to play on a college football field a little sooner than he expected.