That’s when everything blooms.

A 6-foot-7 and 290-pound senior right guard for the Ritenour football team, Duerbeck made his varsity debut on the offensive line this spring when the Huskies took part in the alternate fall season that was offered for schools that did not play in the fall due to the coronavirus pandemic.

“Once I found out we were having a spring season I was ecstatic,” Duerbeck said. “Spring was a great opportunity to get noticed. I feel like I had a great spring season.”

If you watched film of Duerbeck from his first three years of high school football and then compared it to the four games he played this spring you wouldn’t recognize him.

As an underclassmen Duerbeck spent the majority of his time on the defensive line and at tight end. After brief stints playing on the offensive line in middle school and in ninth grade, he had no interest in it.

Or the weight room, for that matter.

But all that changed last March when Duerbeck made a choice that would radically alter the trajectory of his life.

“I decided I wanted to change my lifestyle,” Duerbeck said. “I’d look in the mirror and I didn’t like the way I looked.”

Duerbeck began small. He challenged himself to crank out 100 pushups a day. Every few days he’d hit the school track and knock out some laps. At first it was four, then it became eight. Eventually the pushups weren’t enough, he was ready for more.

Kyle Wagner was ready to lay more on him.

Wagner was hired as Ritenour’s football coach in March of 2020. He has since resigned to take the same position at Sikeston effective this week. But before he left, he had plenty of pandemic free time to watch film and get to know the strengths and weaknesses of players in the program. What Wagner saw was some untapped potential in several of the returning Huskies. One that stood out immediately was Duerbeck.

“I saw something in him,” Wagner said.

He saw something beyond the fact Duerbeck has to duck under the door frames and be mindful of ceiling fans. In his first three years at Ritenour, Duerbeck did not distinguish himself.

But with a new coach and a new attitude, Duerbeck became one. He decided he would give up his spot at tight end and become the right tackle the Huskies needed. It required a lot of work and a lot of learning. He soaked up what Wagner and the coaching staff taught him.

“He took to everything I said,” Wagner said. “He executed on everything.”

After he exhausted his pushup routine, Duerbeck cast aside his reservations about the weight room and embraced it. Now he hits the gym at least three times a week.

As Duerbeck’s strength began to grow, Wagner wanted him to get a better idea of what he was capable of accomplishing. He had Duerbeck take part in a Six Star Football camp in October and a combine in December. These events allowed Duerbeck to test himself against live competition and showcase his physical abilities.

Football opened up a whole new world for Duerbeck. He’d never considered college in his future. He split his time between North Tech and Ritenour. with every intent of becoming a laborer.

“I was going to trade school, learn a trade and jump right into the work force,” Duerbeck said. “I realized college was an option.”

Everything was headed in the right direction as Ritenour prepared to open the spring season in March. With no postseason and only a handful of games, Duerbeck’s biggest task was to put together enough quality work on film to persuade a college program he was worth taking a chance on.

Wagner wanted Duerbeck to unleash the beast that was hiding within.

“He would block a guy for a little bit then let him go,” Wagner said. “I said, ‘Why not push that guy through the back of the end zone?’ ”

Duerbeck listened and discovered he could be ferocious. He has only started to tap into that side of himself.

“He just plays nasty,” Wagner said. “He’s so raw. Once he’s been in a program and lifting weights, I firmly believe it’ll be scary.”

Duerbeck received scholarship offers from the University of St. Mary, Bethany College and Roosevelt University. On Friday he gave a verbal commitment to Lincoln University. Duerbeck considered going to junior college with the hopes of moving on after two years to a Division I or Division II school. Duerbeck will graduate from Ritenour in the spring, but his NCAA eligibility was hampered by his early struggles in high school.

“I wasn’t in the best head space freshman and sophomore year,” Duerbeck said. “If I’d have focused then it’d be easier now.”

Maybe, but everyone’s journey is different. Duerbeck is only at this point because he decided he was going to work hard for what he wanted and see what happened. Now he has options he never imagined and he’s only scratching the surface of what’s ahead.

“He’s had one year of someone pouring into him,” Wagner said. “In two or three years, that kid is going to be special.”

Kyle Wagner served as Ritenour's head coach during the spring 2021 season and had resigned that post to become Sikeston's coach. 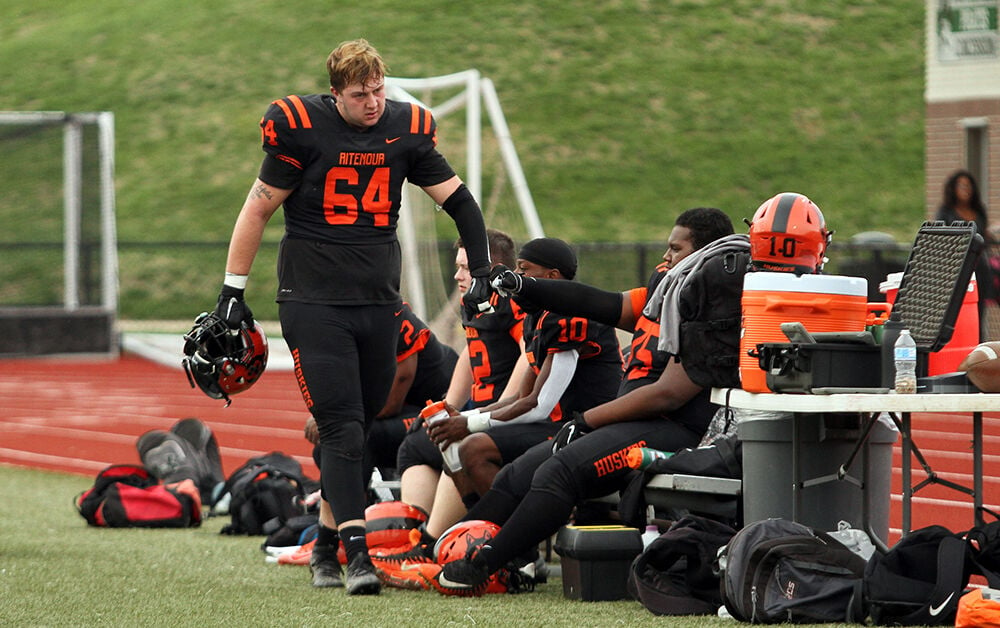 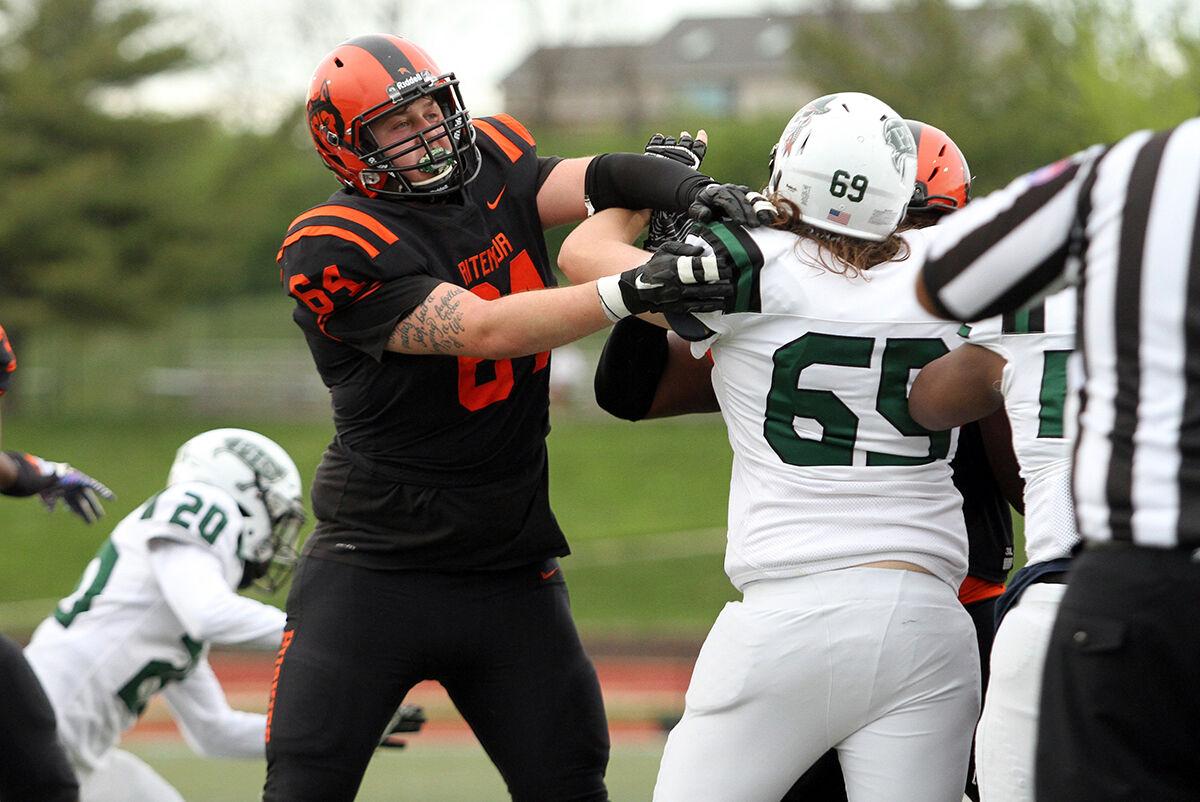 Ritenour's Tyler Duerbeck (64) blocks on an extra point Friday, April 9, 2021, during a football game against Pattonville in Maryland Heights, Mo. At 6-foot-7 and 290 pounds, Duerbeck made huge strides during the spring football season and now expects to play college football. Benjamen Loewnau, Special to STLhighschoolsports.com