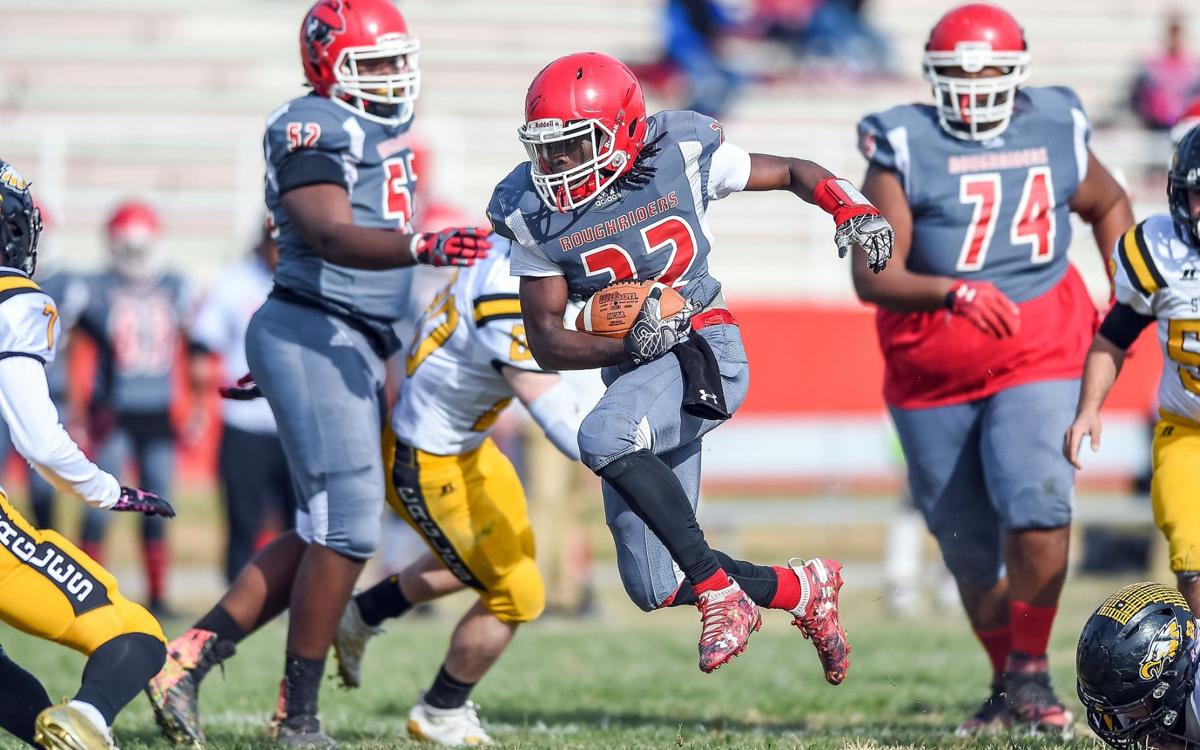 Roosevelt's Dajavion Mitchel cuts and jumps through the hole at the line of scrimmage during a Class 3 District 2 semi-final football game against Sullivan on Saturday, Nov. 9, 2019, at Roosevelt High School in St. Louis, Mo. Randy Kemp | Special to STLhighschoolsports.com 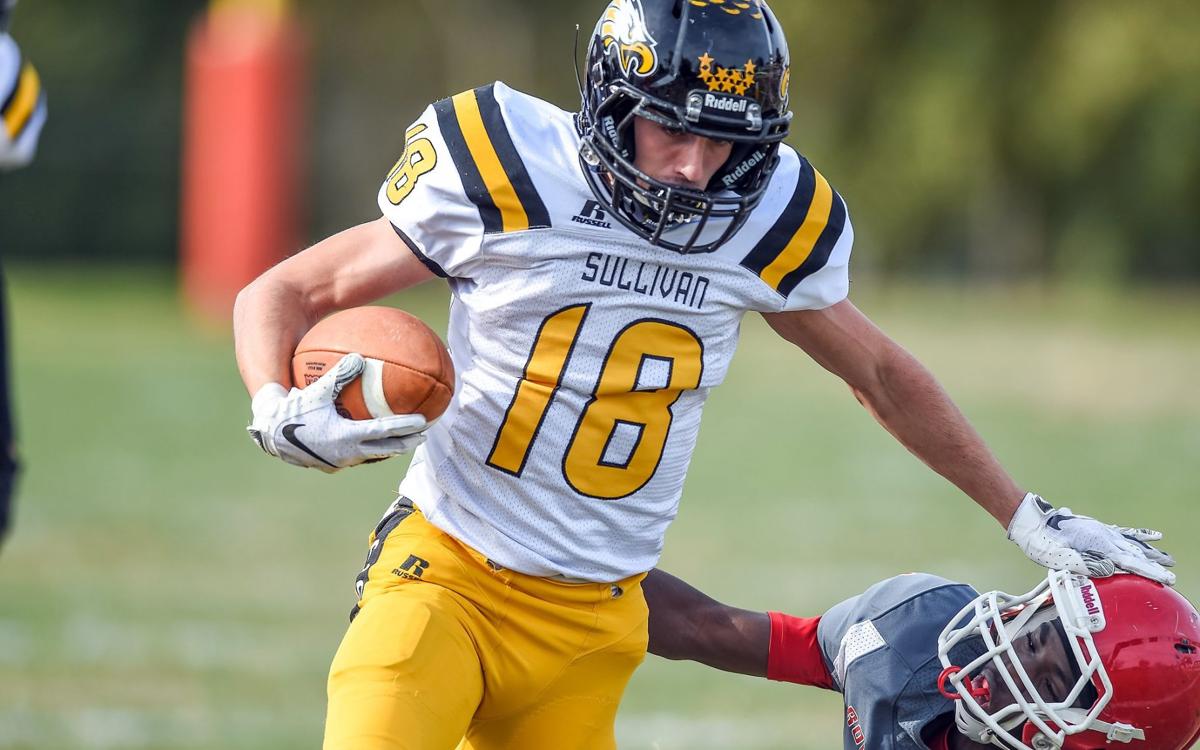 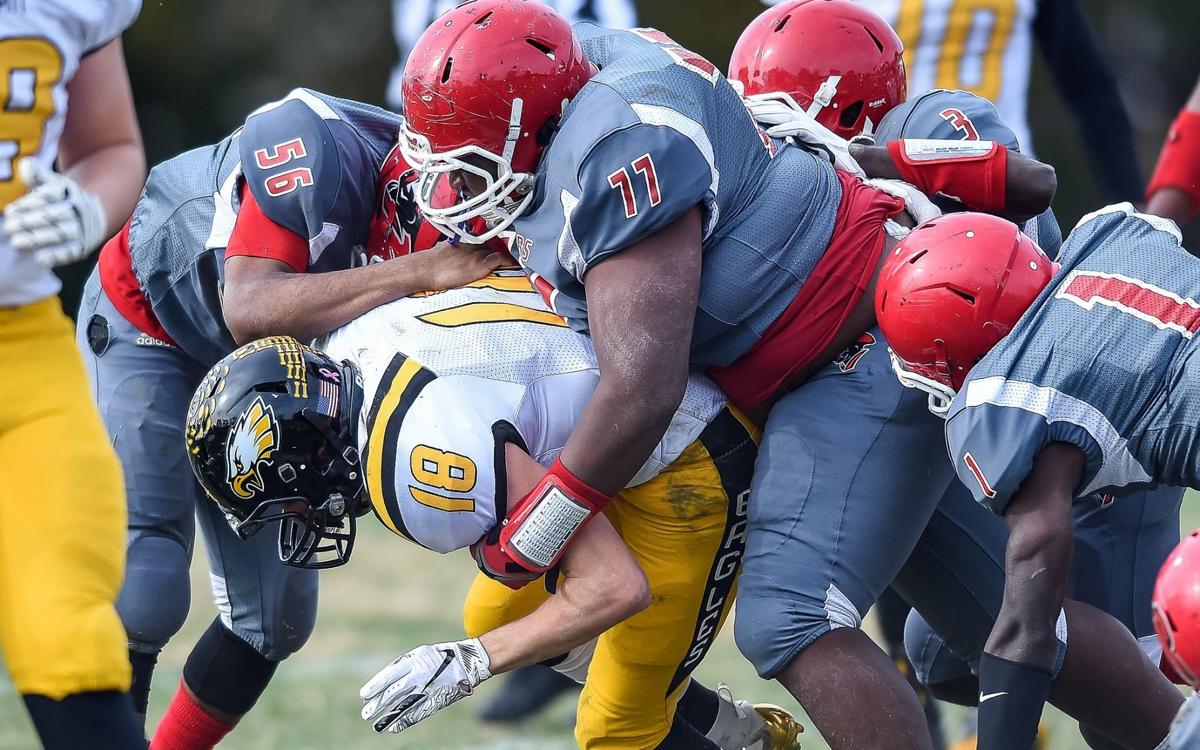 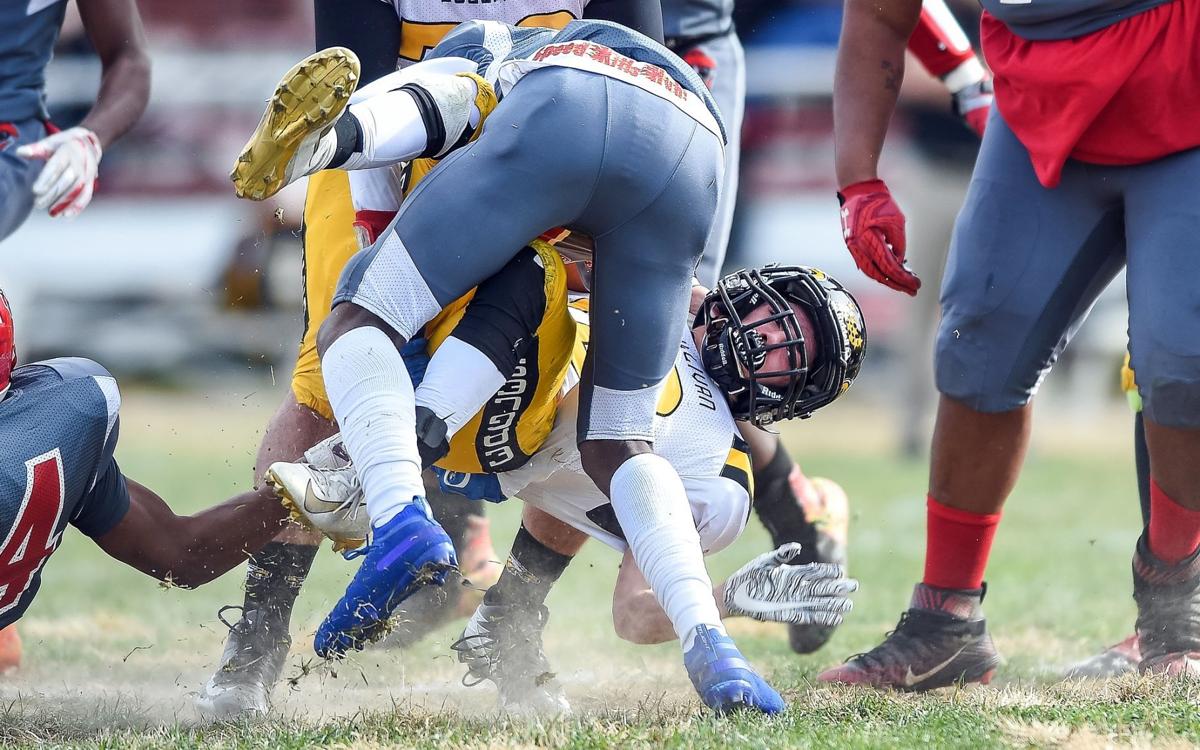 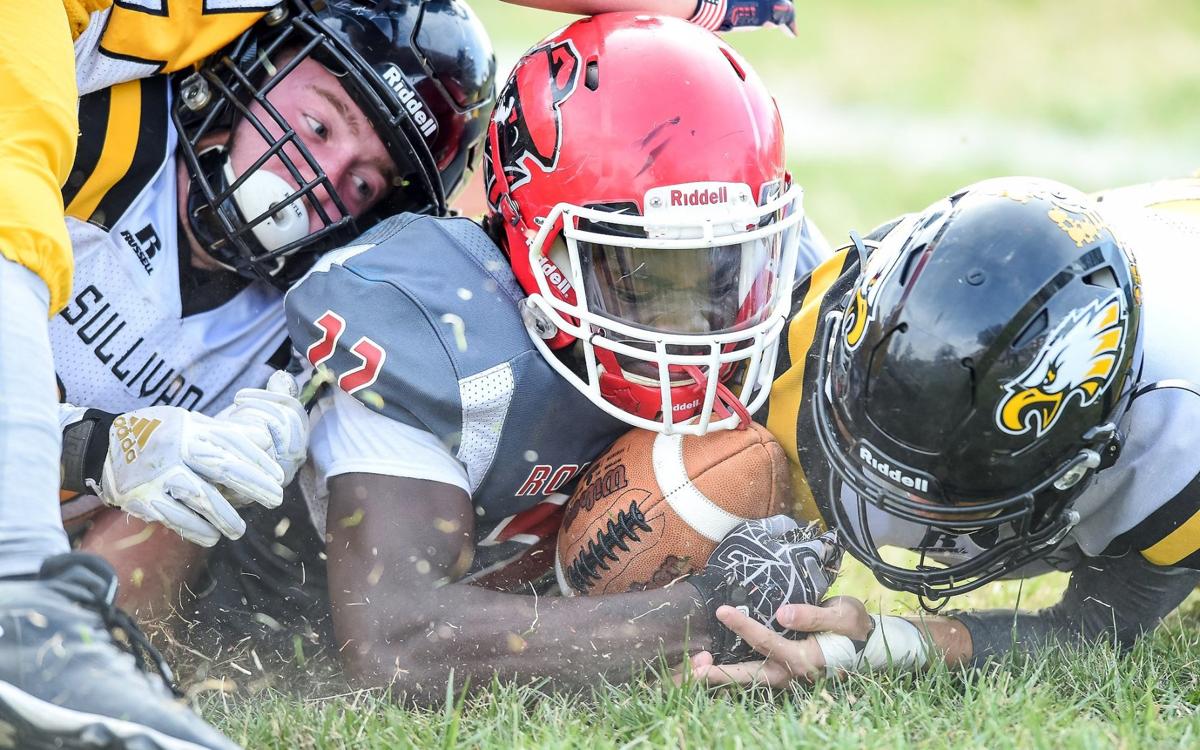 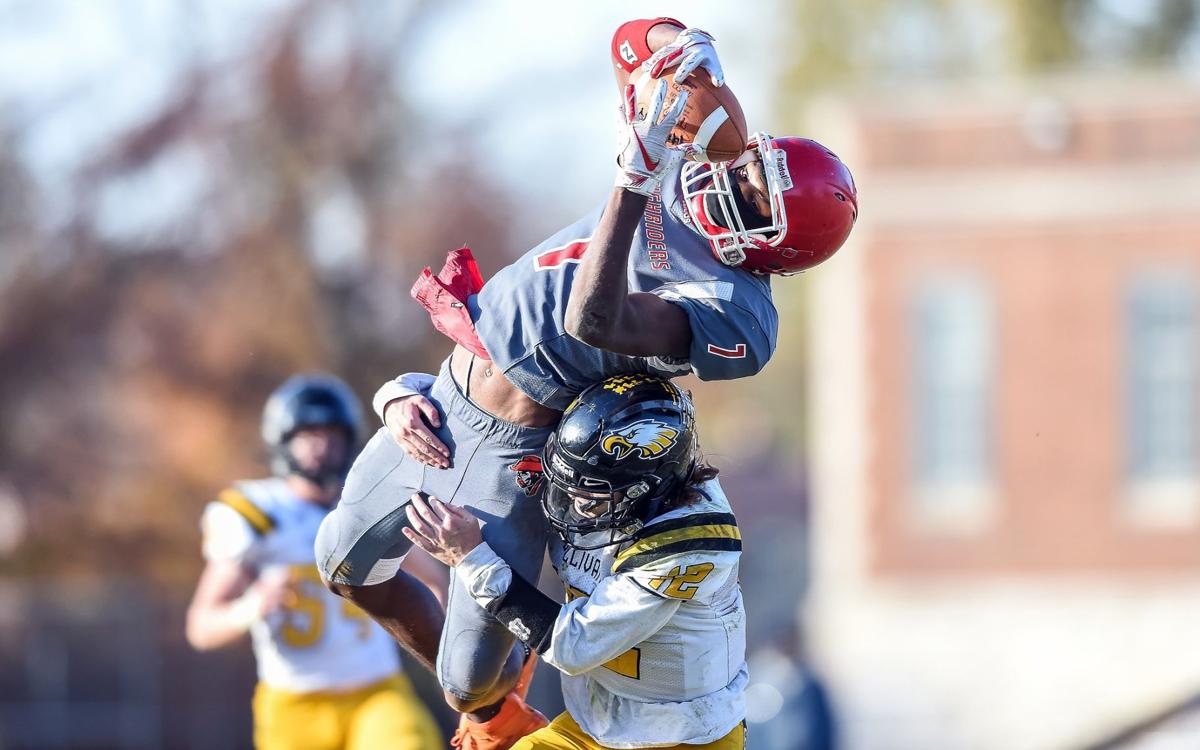 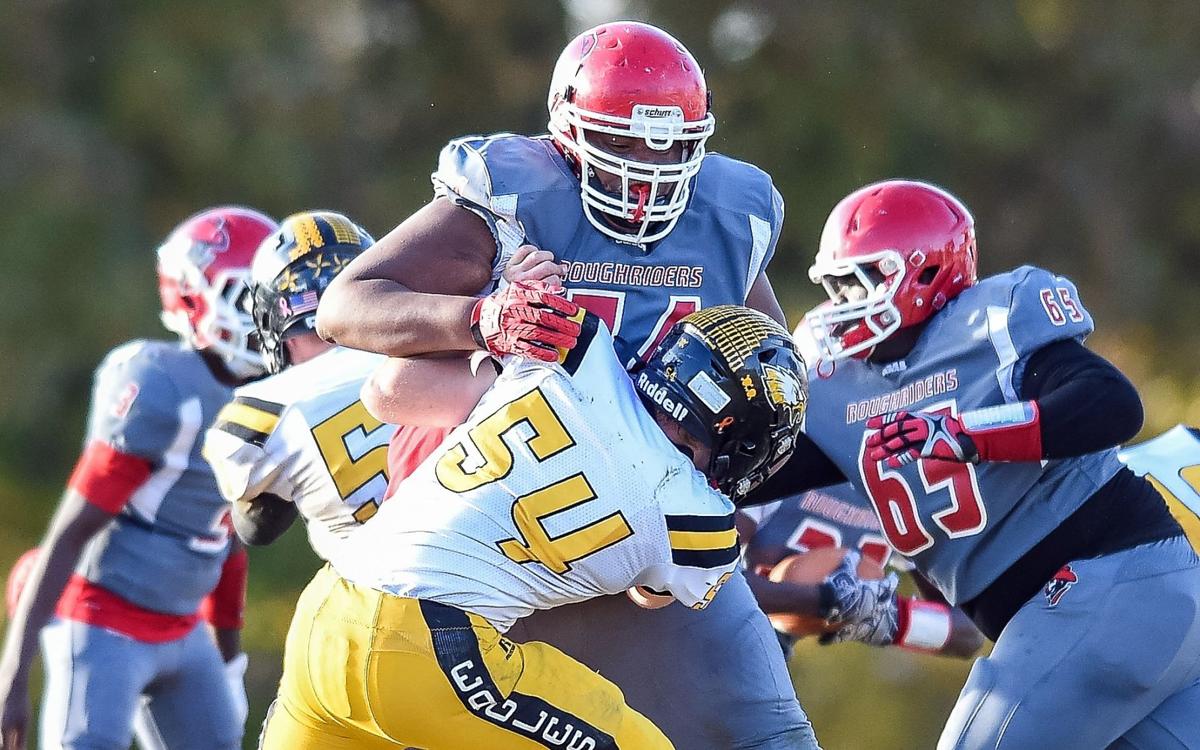 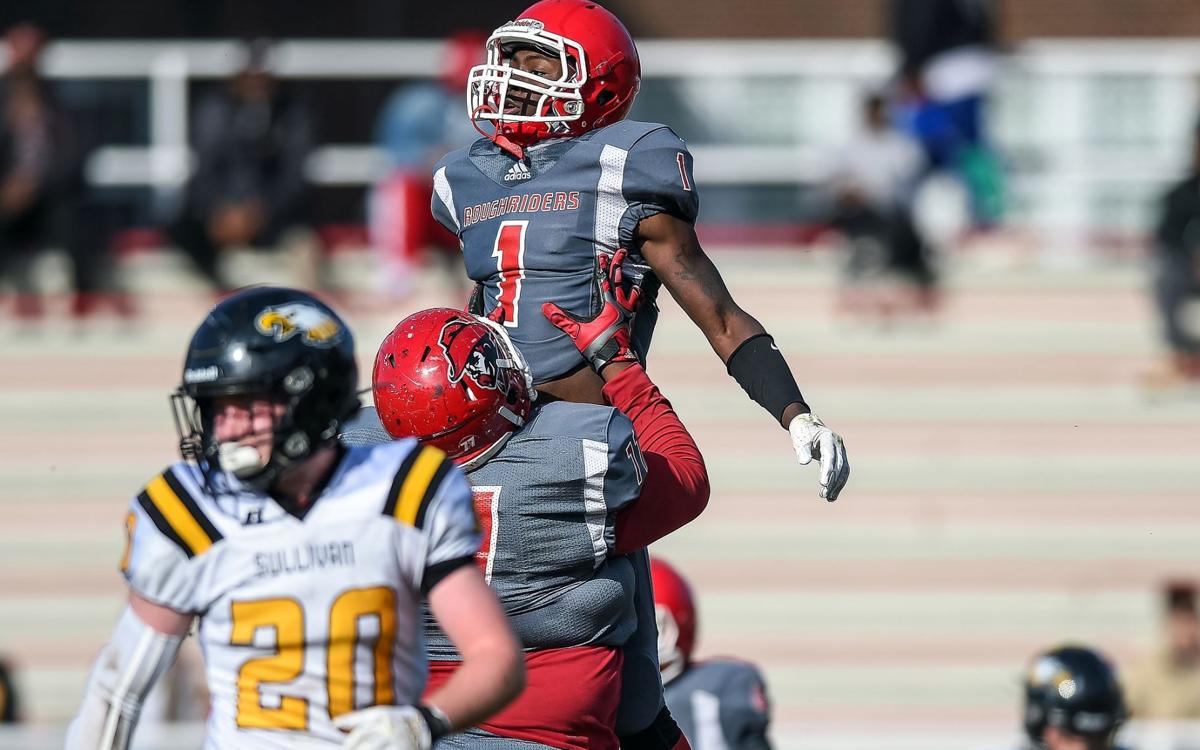 Roosevelt's Ali Hall (1) is hoisted into the air by Alex Mugisha to celebrate his touchdown during a Class 3 District 2 semi-final football game against Sullivan on Saturday, Nov. 9, 2019, at Roosevelt High School in St. Louis, Mo. Randy Kemp | Special to STLhighschoolsports.com 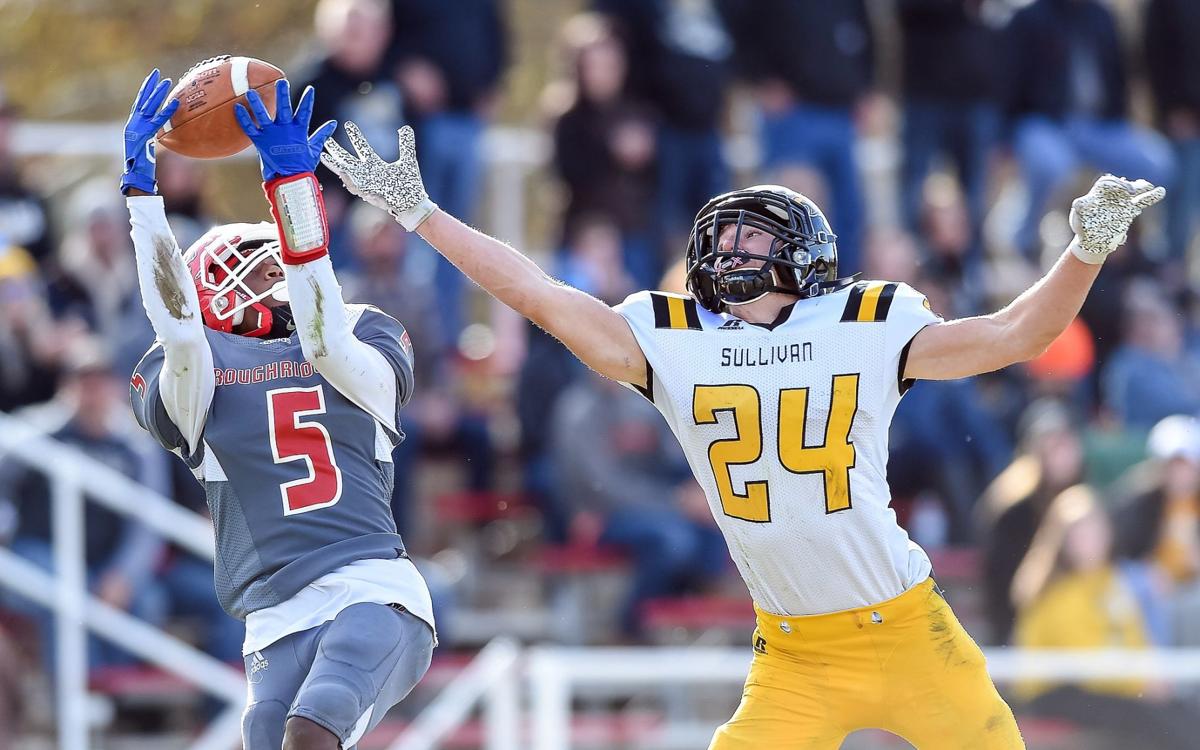 When faced with a Sullivan football team that employs a Wing-T offense that lives and dies with its power rushing attack, Roosevelt had one solution.

That beef did just enough as Roosevelt rallied past Sullivan for a 40-33 win in a Class 3 District 2 semifinal Saturday at Roosevelt.

A year after making a district semifinal and two years after finishing 1-9, the Roughriders set out to earn the top seed and then play for a championship on their home field this season. They have given themselves just that opportunity.

“All the seniors, we wanted to build something for this school,” senior running back Dajavion Mitchell said. “We didn't want to lose and go home early.”

Standing in its way was No. 4 seed Sullivan (6-5). The Eagles deploy a power rushing attack that relies on multiple ball carriers, misdirection and confusion. Finding the ball in the mess of bodies is no simple feet and at times it worked to perfection.

“Everybody is blocking to the same side, you can't see anything,” Roosevelt senior offensive and defensive lineman Alex Mugisha said. “It was hard but we played through.”

All told, seven players attempted a rush for Sullivan. But none of them did the damage of senior running back Ethan Krygiel, who rushed 23 times for 226 yards and scored five touchdowns.

Roosevelt doesn't see any Wing-T offense against its Public High League competition. However, the Roughriders opened the season at Troy and then faced Jefferson in Week 2. Both programs run something similar so the coaching staff and team had experience to draw on when reintroducing their schemes this week at practice.

“We prepared all summer for that but we haven't seen it since,” Roosevelt interim coach Lorenzo Jackson said. “It's hard to prepare for, we don't have the numbers on our scout team to get a decent look. They strapped it up and played hard today.”

Krygiel was the engine that drove Sullivan. Roosevelt got plays from all over the field. Senior running back and slot receiver Ali Hall caught four passes for 83 yards and scored a 35-yard touchdown. He rushed for 40 yards on three carries and scored from 18 yards out, too.

Senior receiver Deablo McGee caught two passes for 40 yards and rushed for 47 yards on three carries including an 18-yard touchdown.

Sophomore quarterback Alonzo Smith completed 9 of 17 passes for 167 yards, one touchdown and was intercepted twice. He rushed seven times for 50 yards and scored a 5-yard touchdown.

The Roughriders got two assists from the Eagles. Twice Sullivan lined up to punt deep in its own territory and twice the ball sailed over senior Kristian Harm's head out of the end zone for safeties.

The first one proved huge. Sullivan took a 33-30 lead with 5 minutes and 58 seconds to play in the third when Krygiel punched in his last touchdown of the afternoon.

After forcing Roosevelt to turn the ball over on downs at its 27, Sullivan was hit with a dead-ball unsportsmanlike conduct penalty that pushed it back to the 11. Four plays later, the Eagles lined up to punt only to give up two points to make it 33-32 in the last minute of the third. After Sullivan free kicked the ball back to Roosevelt, it took the lead for good. On the fourth play of the fourth quarter, Mitchell broke off a 46-yard run with 10:40 remaining. All afternoon the Roughriders used their speed to try and get to the edge and cut up field. This time the coaches saw the Sullivan defense was lined up to have some give in the middle. Mitchell attacked the soft spot in the heart of the defense.

“I know when their defense is in that, it's easy,” Mitchell said.

Sullivan, in search of a touchdown, forced another turnover on downs deep in their own territory.

A holding penalty loomed large as it took a first down off the board and pushed Sullivan back to its 13. Three plays later, the snap was once again sent over Harm's head for a safety and gave Roosevelt a 40-33 lead with 5:26 to play.

“It's a huge momentum shift,” Sullivan coach Cody Davis said. “Your snapper is the starting tight end and the starting defensive end and he goes out and he's tired. The kids were leaving it all on the field.”

Sullivan gave itself one last gasp when it held Roosevelt on its ensuing possession and began its own at the Roughriders 43 with 1:42 to play and no timeouts remaining. On fourth-and-19 at the 35, their desperation pass fell incomplete with 19 seconds to go.

Roosevelt survived for another week to play another game on its home field.

“That's what we worked hard for all year, to get the district championship right here on the south side,” Jackson said. “We wanted them to come here and we'll see what happens.”

Roosevelt's Dajavion Mitchel cuts and jumps through the hole at the line of scrimmage during a Class 3 District 2 semi-final football game against Sullivan on Saturday, Nov. 9, 2019, at Roosevelt High School in St. Louis, Mo. Randy Kemp | Special to STLhighschoolsports.com

Roosevelt's Ali Hall (1) is hoisted into the air by Alex Mugisha to celebrate his touchdown during a Class 3 District 2 semi-final football game against Sullivan on Saturday, Nov. 9, 2019, at Roosevelt High School in St. Louis, Mo. Randy Kemp | Special to STLhighschoolsports.com