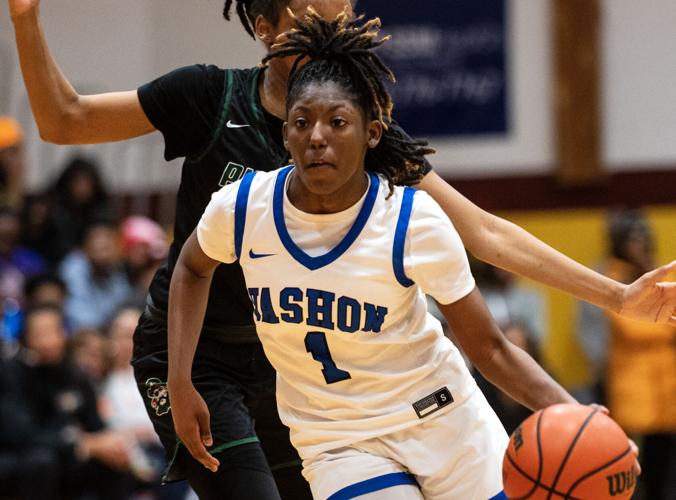 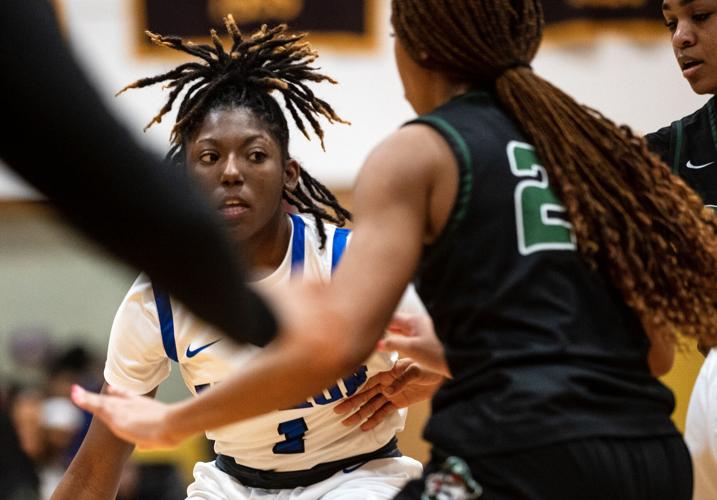 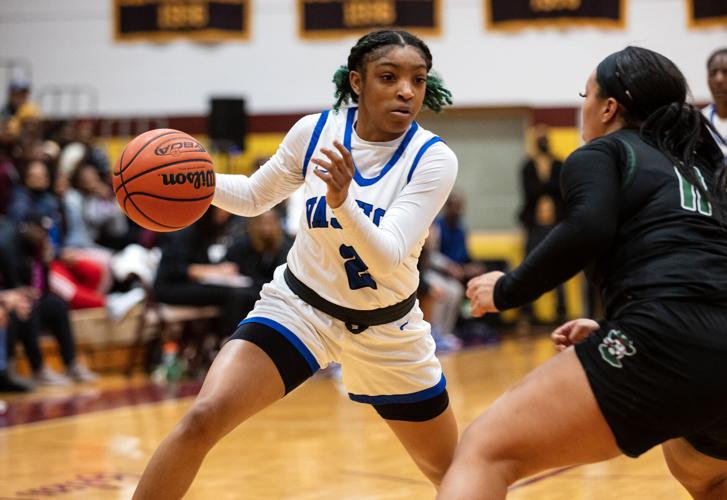 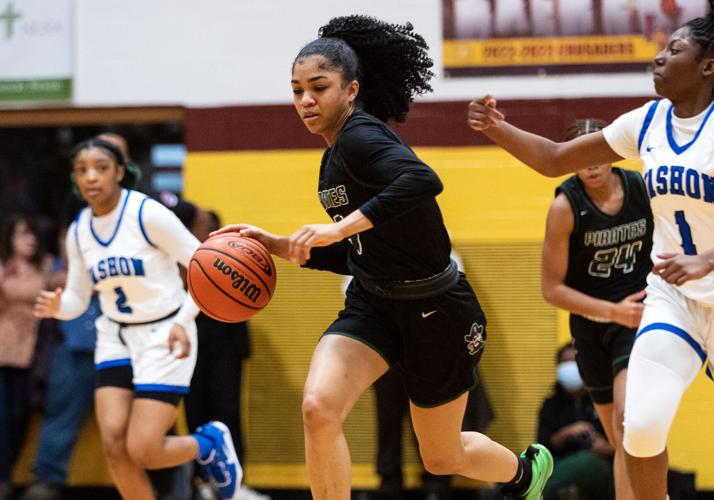 Patotnville’s Jasmine Gray (5) brings the ball down the court during a girls basketball game in the All-Girls Showcase on Saturday, Jan. 21, 2023, at Lutheran North High School in St. Louis, Mo. Paul Halfacre, STLhighschoolsports.com 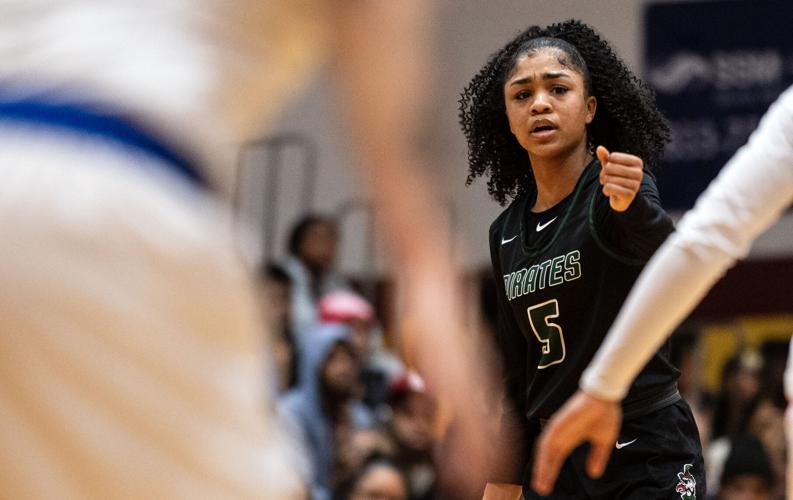 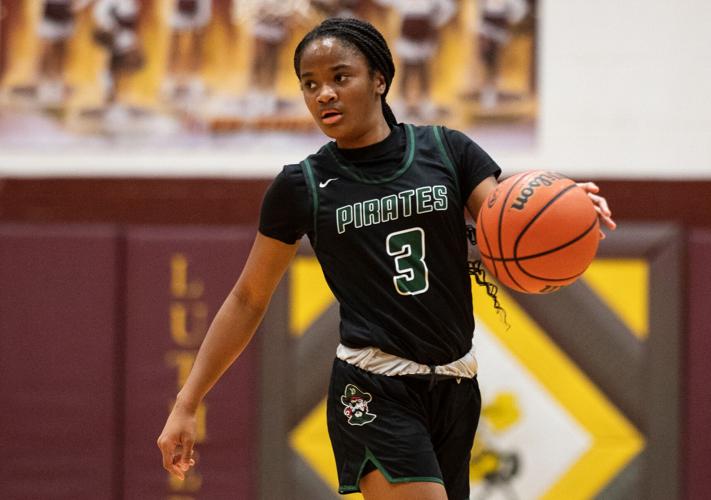 Pattonville’s Hannah Fenton brings the ball down the court during a girls basketball game in the All-Girls Showcase on Saturday, Jan. 21, 2023, at Lutheran North High School in St. Louis, Mo. Paul Halfacre, STLhighschoolsports.com

Ja'Nyla Bush knew it would be a chilly ride home.

It's a good bet the Vashon High junior loved every minute of it.

Bush pumped in a game-high 24 points Saturday to lead the Wolverines to a 76-61 win over Pattonville in the final game of the All Girls Shootout basketball event at Lutheran North.

The slick 5-foot-6 guard put on a shooting clinic in beating the Pirates, where her dad John serves as an assistant coach.

The two left the game together for the long ride home.

"He kept texting me with trash (talk) all day long," Ja'Nyla said.

Bush planned on giving it back to her father on the journey home.

"He deserves it," Ja'Nyla said.

John Bush rolled his eyes and said his daughter's performance "was great." Although he wanted to sound sarcastic, it was easy to see there was pride in his words.

Bush did just that.

She hit a pair of 3-pointers in the opening 3 minutes and 36 seconds to stake her team to a 9-0 lead.

Then, after Pattonville trimmed a once 14-point deficit to 33-31, she closed the second quarter by converting on an old-fashioned 3-point play for five-point cushion.

Bush, a transfer from Whitfield, caught fire at the outset of the third period with five points over the first 59 seconds. Her nifty basket off a drive along the baseline pushed the Vashon lead to 49-35 with 2:06 left in the third quarter.

"You could tell she wanted to ball out in front of her father," explained Vashon senior Raychel Jones, who added 16 points to the winning attack.

Vashon junior Chantrel Clayton had 20 points for the winners. Another transfer, this one from Cardinal Ritter, teamed with Bush to form a deadly one-two punch.

Christmas came early for Vashon coach John Albert, like back in August, when he found out that two of the area's better players would be coming to his school.

Bush has given a verbal commitment to attend Missouri State University in Springfield.

The Wolverines have faced a rugged schedule and have quietly become a team to watch in the Class 4 state tournament. Three of their four losses have come against tradition-rich schools from Tennessee and the Chicago area.

"We're trying to buckle down," Albert said. "We know what's in front of us."

Vashon, No. 3 in the STLhighschoolsports.com small-school rankings, used an aggressive defense and some eagle eyed outside marksmanship to build up leads of 12 points in the first half and 14 in the second half.

"We've been shooting the ball well all year," Albert said. "That's part of our game. We live and die by the three.

The Wolverines (11-4) made 11 triples Saturday including seven in the opening half.

Senior Brianna Hoffmann added a pair of big 3-pointers in the contest.

Pattonville (10-3) made a pair of runs behind Jasmine Gray, who finished with 16 points. Taylor Montgomery pulled her team to within 58-55 with a conventional 3-point play midway through the final stanza.

But Jones hit five foul shots in a 7-second span to regain command.

"Turnovers and bad decisions with the basketball at the wrong times," Pattonville coach Don Boyce said. "But we're learning. I was happy that we continued to fight. We didn't fold."

Vashon snapped a two-game losing streak on a Tennessee road trip and appears to be set for a lengthy post-season run.

"We think we can go pretty far," Bush said.

The five-game showcase was played before a standing room only crowd. More than 800 filled the small gymnasium, giving the games a postseason feel.

Timberland basketball player Leah Wilmsmeyer's battle and recovery from breast cancer has been an inspiration to her team and opponents alike.

Sacred Heart (16-3) is the two-time defending Kentucky state champion and is ranked No. 12 in the country according to latest ESPN poll.

Panthers capture battle between state-ranked squads before a standing-room-only crowd.

COLUMBIA, Ill. — Sam Lindhorst looked to the floor and shook her head.

Undefeated Redbirds set program record for victories in a season with 23.

MANCHESTER — Alivia McCulla was not a happy camper.

Mascoutah's Sophia Loden and Waterloo's Norah Gum are two of the top girls basketball players in the area.

Patotnville’s Jasmine Gray (5) brings the ball down the court during a girls basketball game in the All-Girls Showcase on Saturday, Jan. 21, 2023, at Lutheran North High School in St. Louis, Mo. Paul Halfacre, STLhighschoolsports.com

Pattonville’s Hannah Fenton brings the ball down the court during a girls basketball game in the All-Girls Showcase on Saturday, Jan. 21, 2023, at Lutheran North High School in St. Louis, Mo. Paul Halfacre, STLhighschoolsports.com