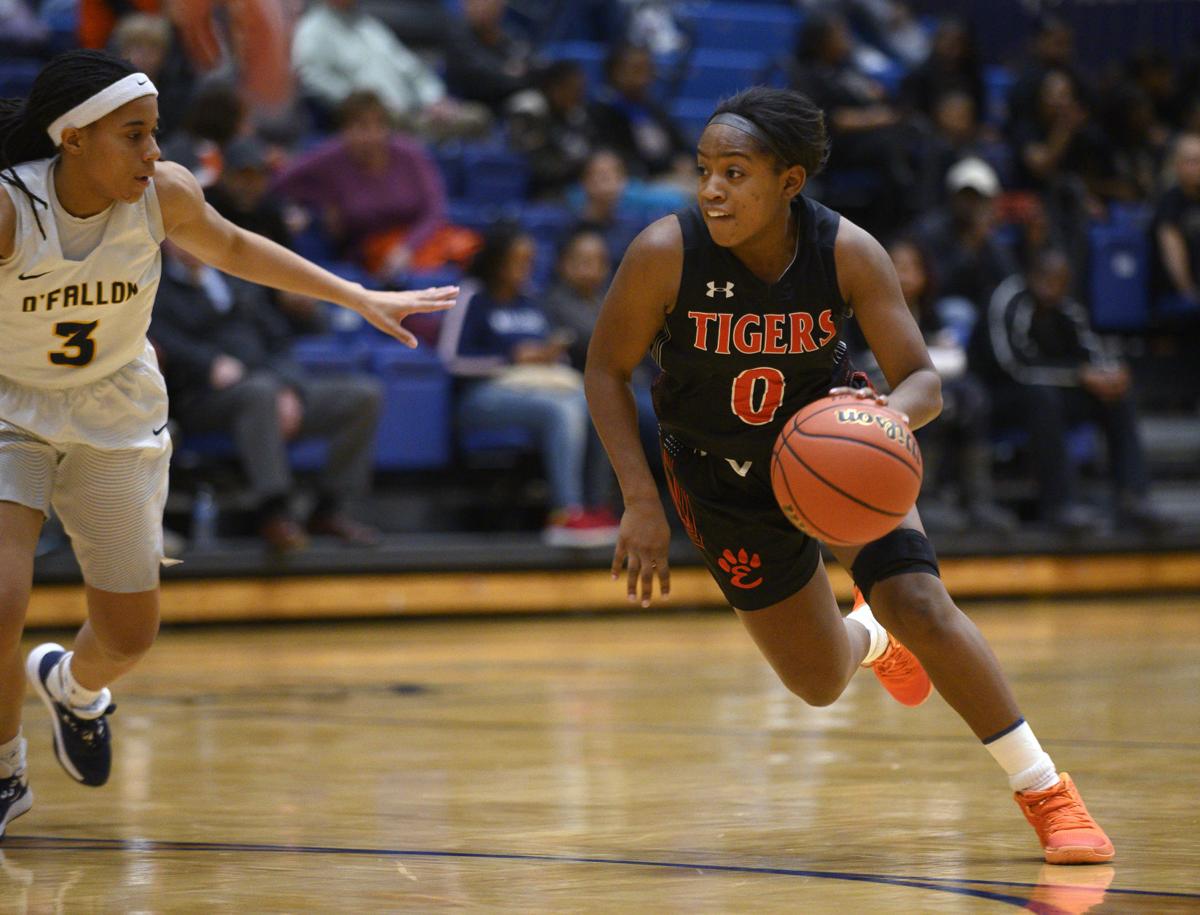 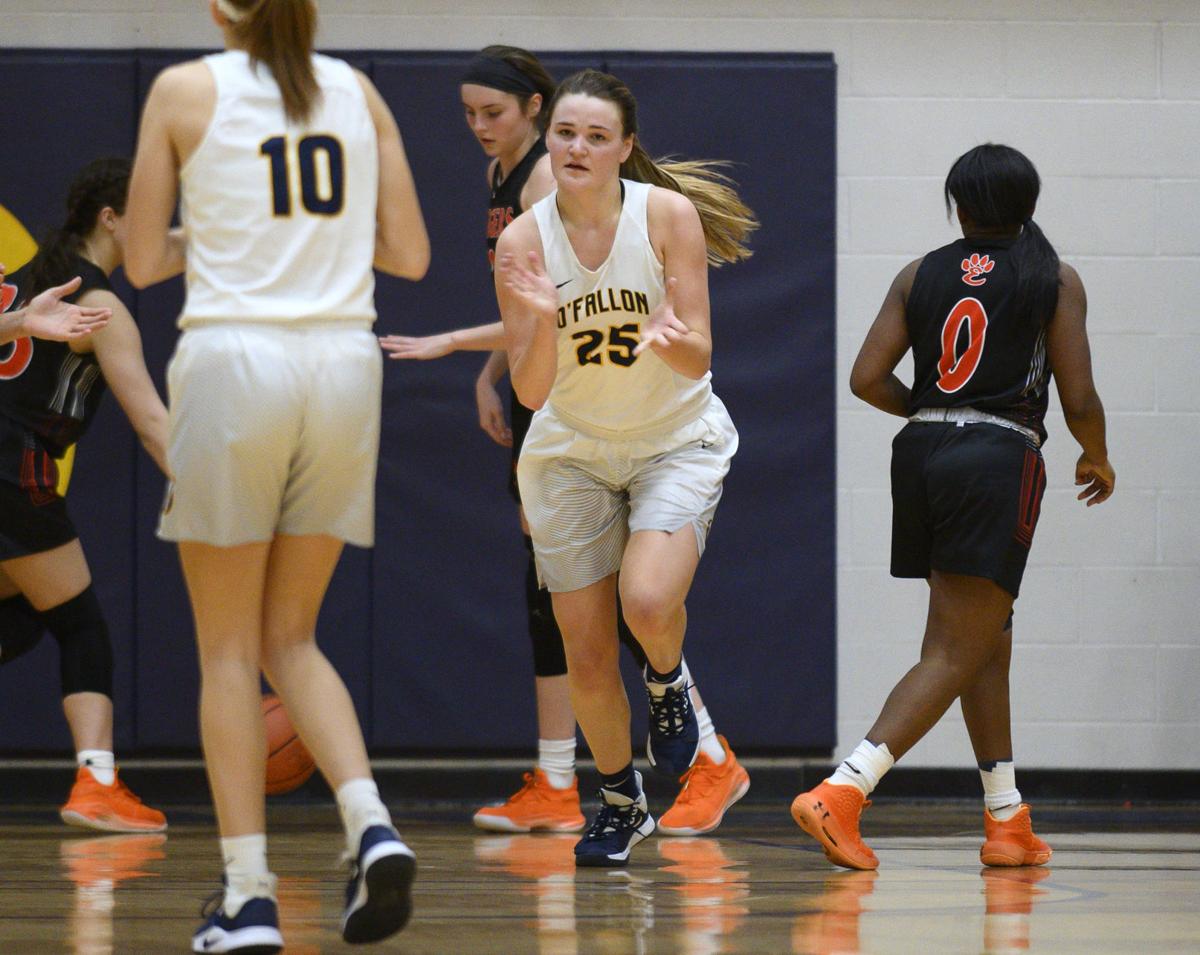 O'Fallon's Amelia Bell (25) runs back on defense after a putback bucket during a girls basketball game on Tuesday, February 11, 2020 at O'Fallon Township High School in O'Fallon, Ill. Paul Halfacre, STLhighschoolsports.com 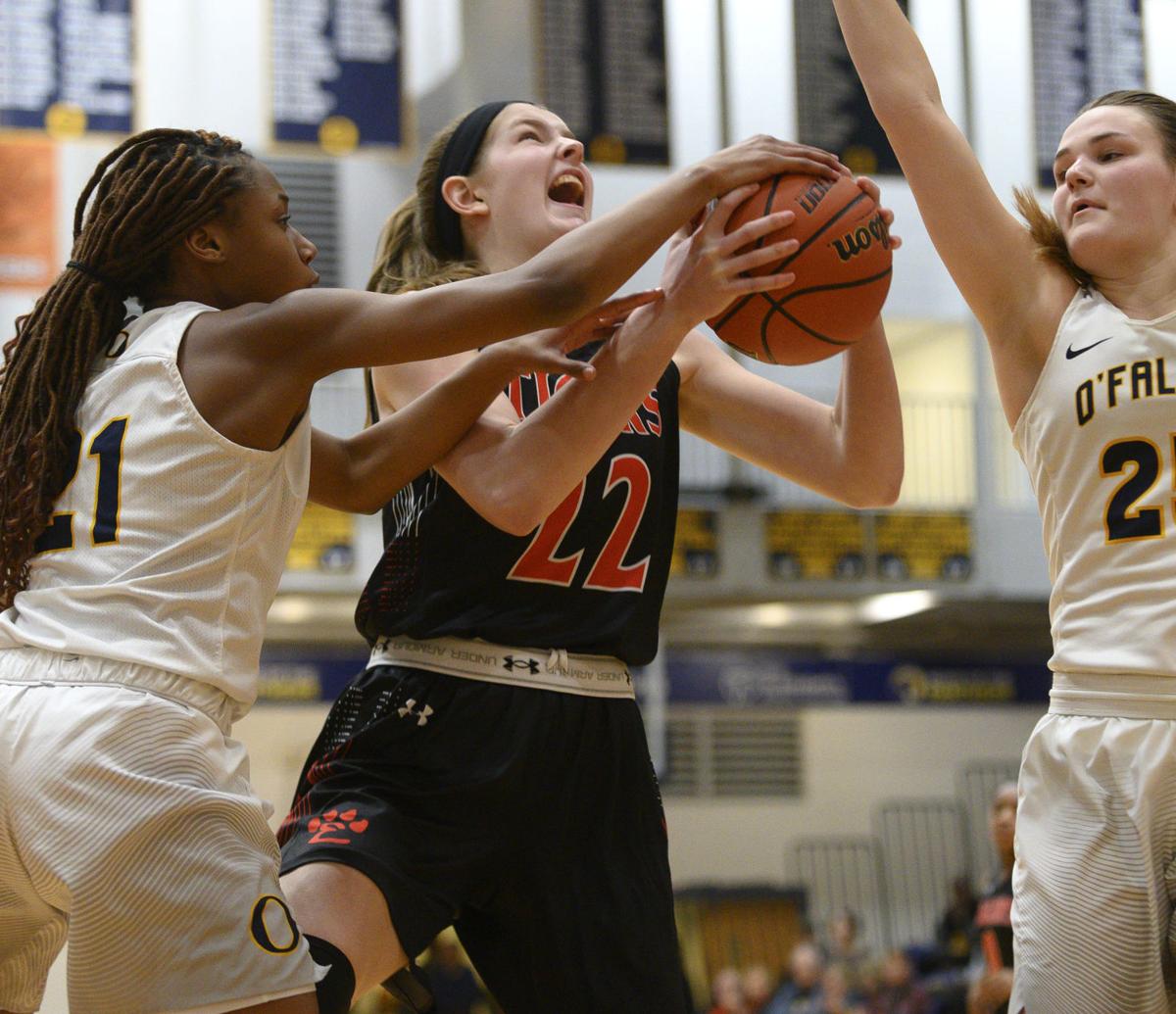 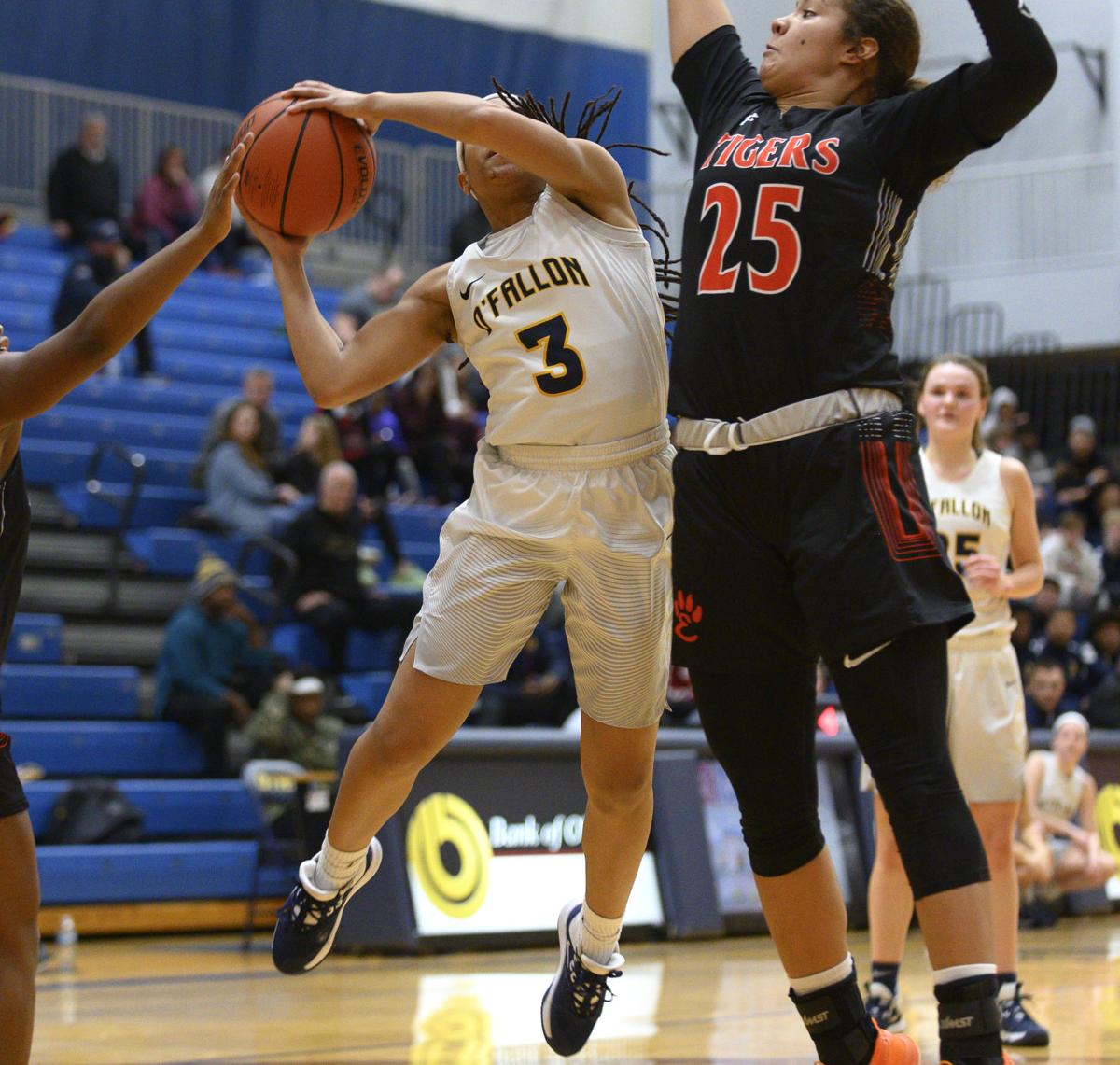 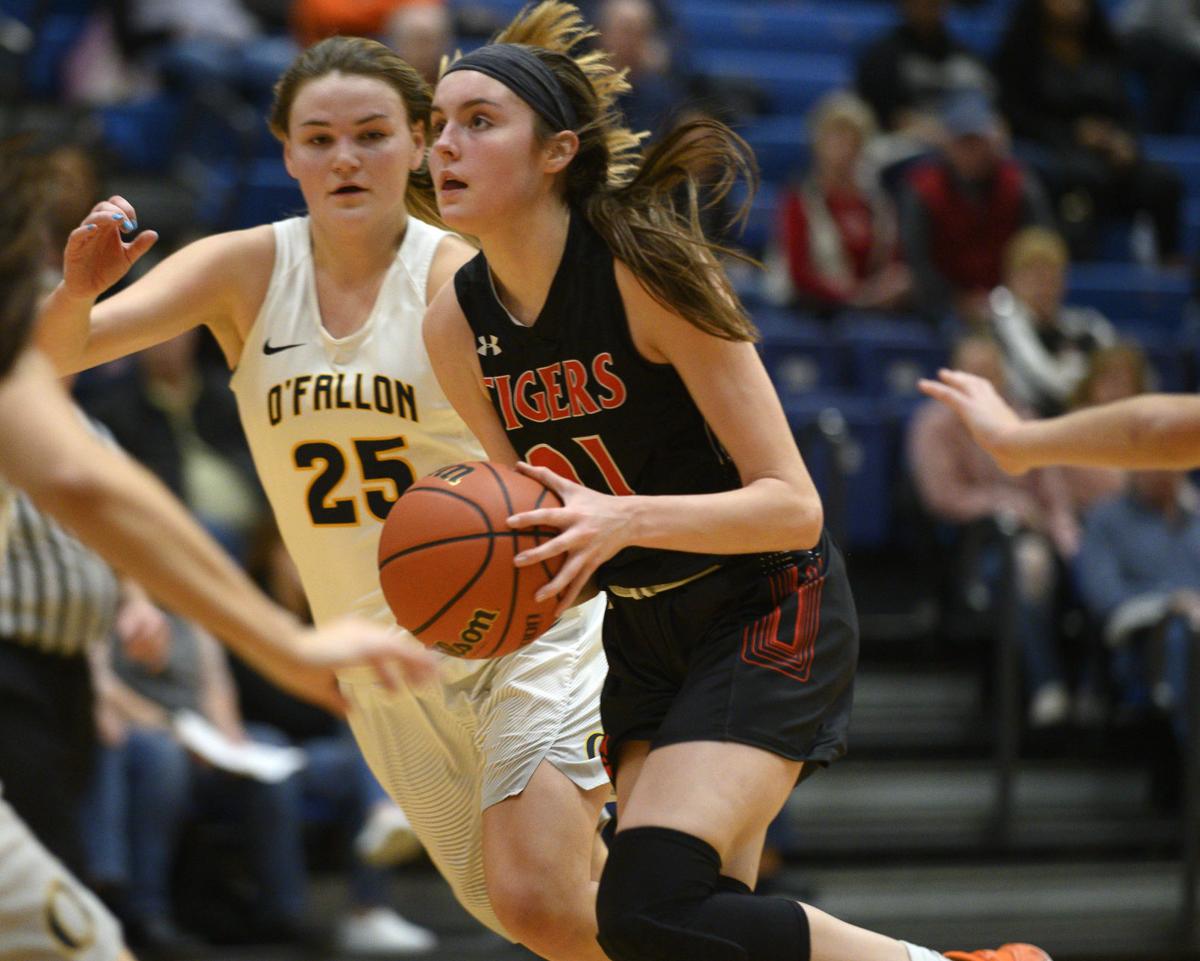 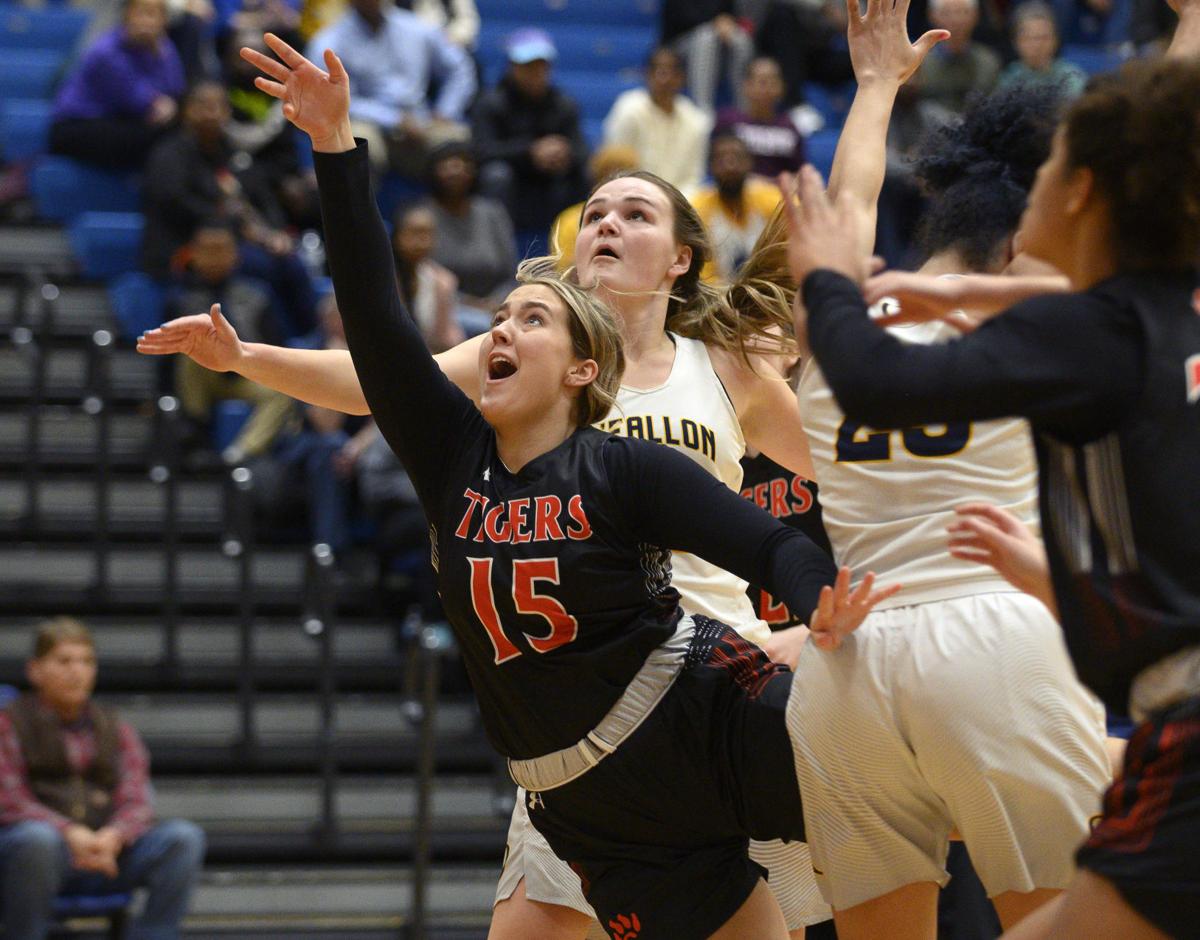 Her final 3-pointer meant even more for the Edwardsville High girls basketball game.

"I just did it for my teammates," Love said. "I'm glad they passed it to me and allowed me to take the shot."

The senior point guard's 3-pointer in overtime gave Edwardsville the lead for good as it defeated O'Fallon 68-65 in a Southwestern Conference game at O'Fallon High School.

"What a hard-fought game — well-played for both teams," Edwardsville coach Lori Blade said. "We just made a few more plays down the stretch."

But four of the last five meetings have been determined by less than 10 points after the previous 30 were by double-figure margins.

"Crazy," Blade said. "This has been one of the tougher ones. As tough as this conference has been since I've come to Edwardsville, it's really crazy that we've won 13 in general and 11 in a row."

Love eclipsed the 1,000 career point barrier when she nailed her first 3-pointer early in the first quarter.

But her fourth 3-pointer proved to be go-ahead shot.

In a 63-63 tie with 1:46 left in the overtime period, Love got free from the O'Fallon defense and lined up her shot off the left wing.

When she got the ball, she didn't hesitate.

"I feel so supported by this team that I felt comfortable enough to just shoot it and I know they'd have my back," Love said.

She missed the front end of a one-and-one that could have salted the game away in overtime, but Blade's faith never wavered in her senior leader.

"I wanted the ball in her hands," Blade said. "It was an unusual miss that first time, but I'll put her right back there."

Love hit her final two free throws to put Edwardsville ahead 68-65 with less than 10 seconds left in overtime.

After a timeout, O'Fallon freshman Shannon Dowell lined up a deep 3-pointer that nearly bounced in but rimmed out at the buzzer to seal Edwardsville's 11th consecutive victory.

"It's like a cat-and-mouse game that she'll play," Knolhoff said of Edwardsville's Blade. "I thought she was going to foul and we could set up a set, but I still feel like we still got a good look there."

O'Fallon junior Amelia Bell had a game-high 28 points, including 10 points in the third quarter as the Panthers surged ahead.

"For her to step up like she did, it was really impressive," Knolhoff said.

After seeing the 6-foot Panthers junior nail her fifth 3-pointer of the game in the third quarter, Blade made an adjustment. Bell was held without a shot attempt in the fourth quarter and overtime.

O'Fallon took a 49-47 lead with two minutes left in the third quarter, but Blade never called a timeout in panic.

"I thought our kids responded as well as I could have expected them to when we got down," Blade said. "It was interesting to see, to sit back and see how they'd respond and they did a great job."

O'FALLON, Mo. — Claudia Hoff is not one for the limelight, even if it found her Tuesday.

HERMANN — The Union High girls basketball team stumbled to four losses out of its last five games in January, including a key conference game.

GILLESPIE — Lainey Kramer knows she doesn't deserve a whole lot of attention at the offensive end of the basketball court.

Natalie Bruns lifted the Pioneers to a 51-50 comeback victory at Parkway North by sinking a pair of free throws with 12 seconds left in the Suburban Conference Yellow Pool girls basketball game.

Veteran coach Dave Kohnen has been fighting off a flu bug all week but made sure he could be on the sideline Thursday to guide Mater Dei's girls basketball team to its fifth consecutive regional title.

WAYNE CITY, Ill. — Michelle Hasheider-Burianek had a wry smile on her face when she saw her sophomore center dribbling the ball down the court…

O'Fallon's Amelia Bell (25) runs back on defense after a putback bucket during a girls basketball game on Tuesday, February 11, 2020 at O'Fallon Township High School in O'Fallon, Ill. Paul Halfacre, STLhighschoolsports.com