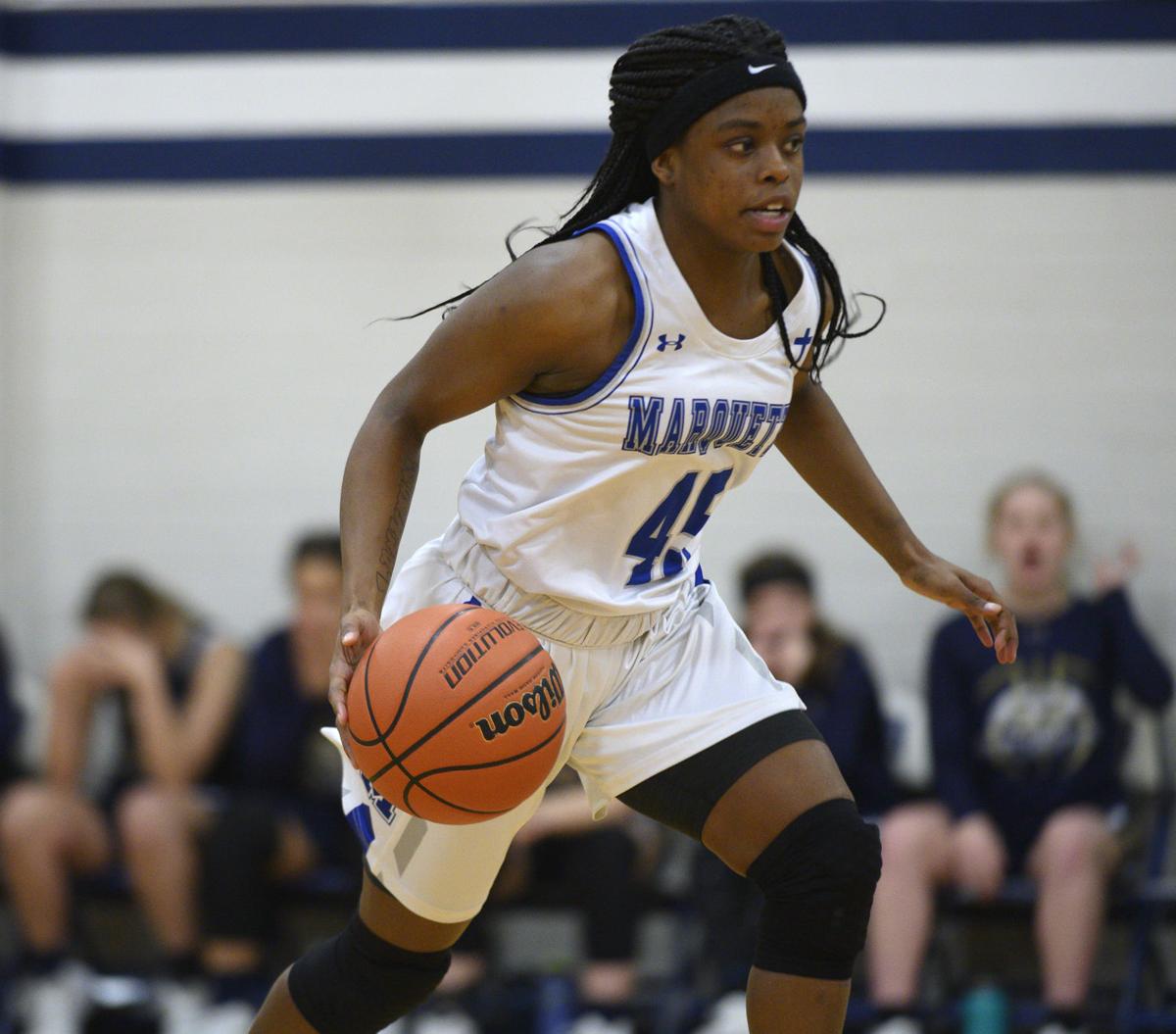 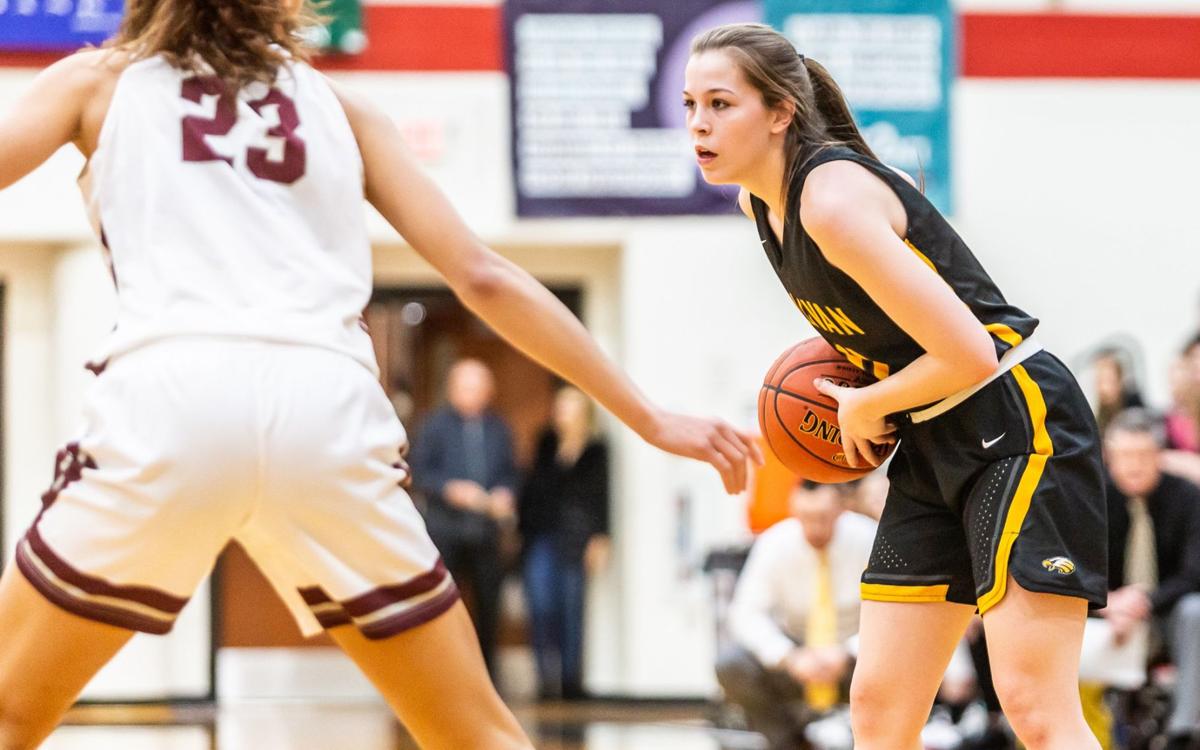 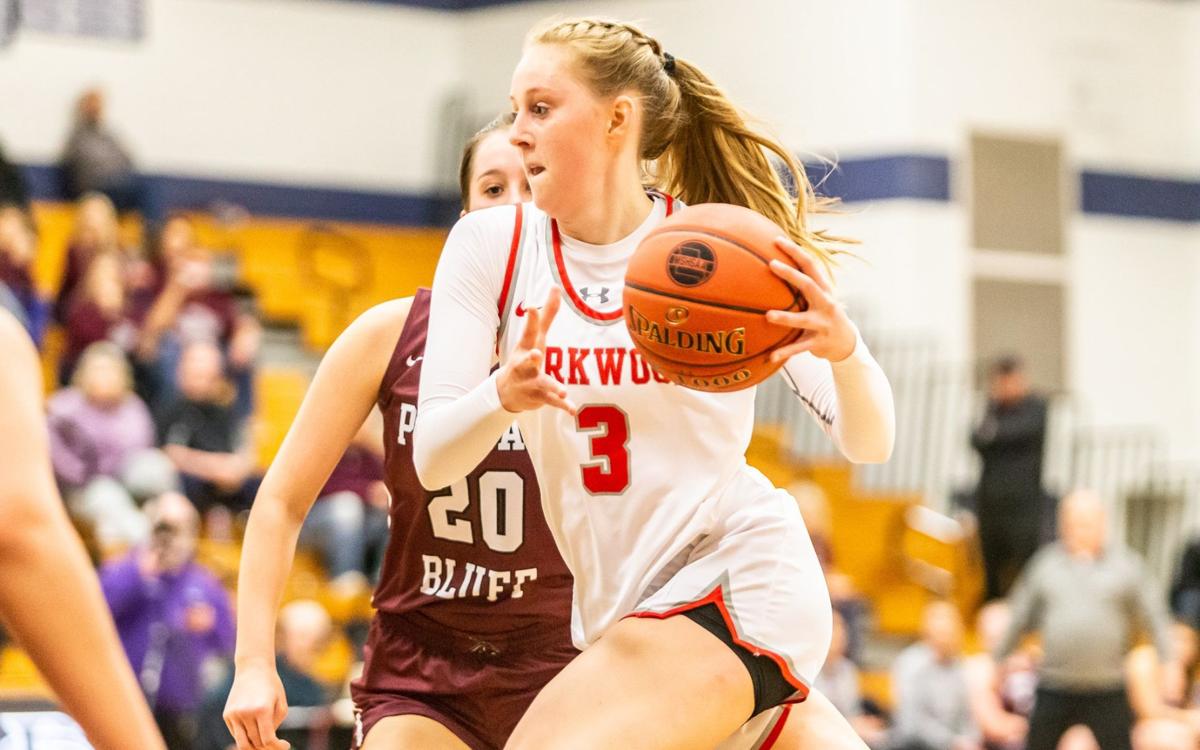 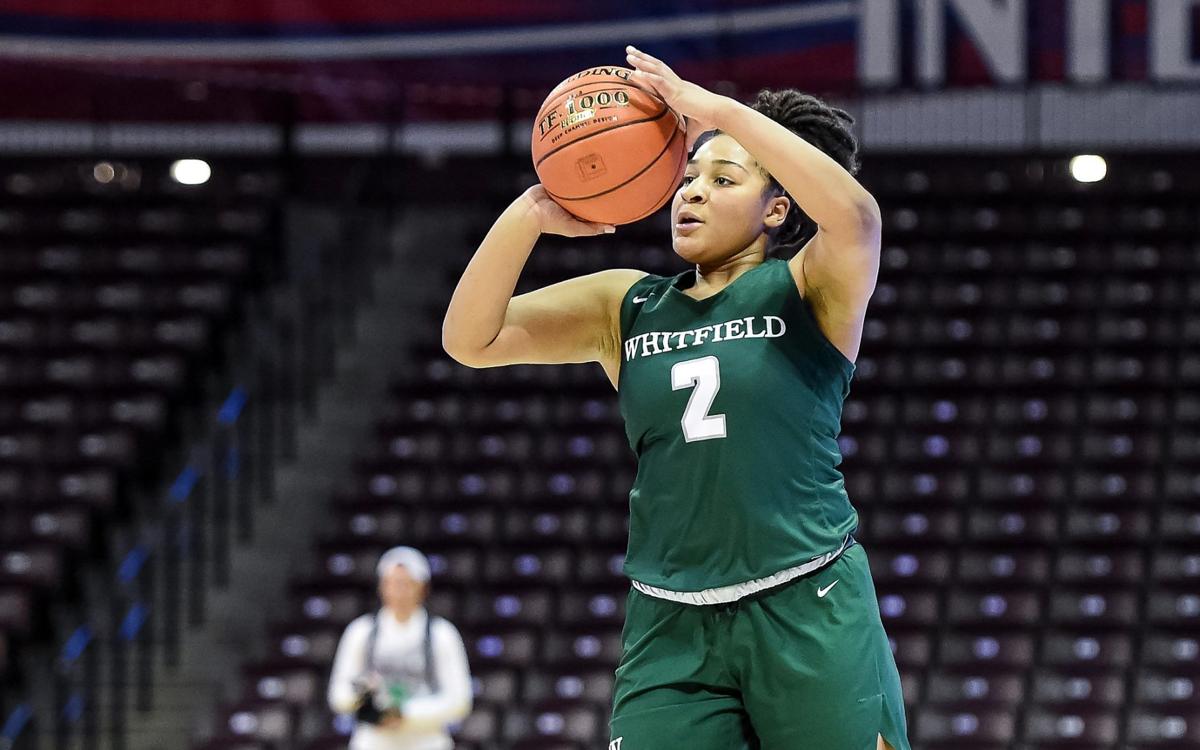 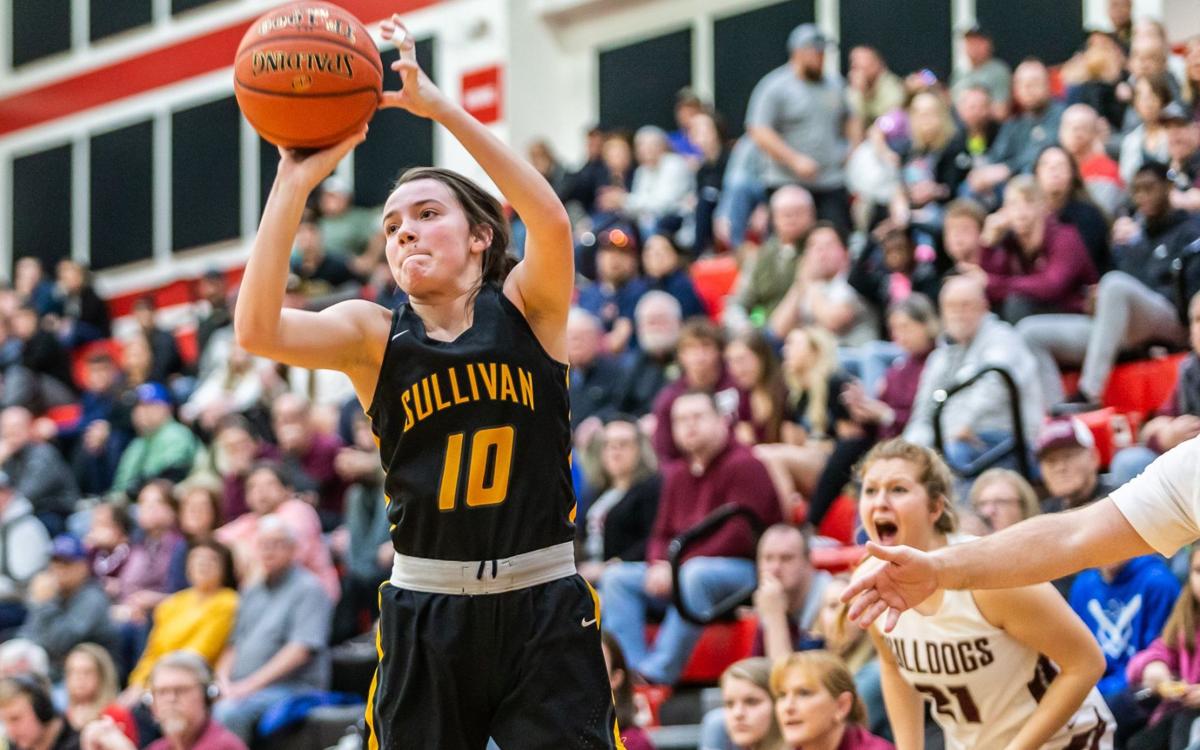 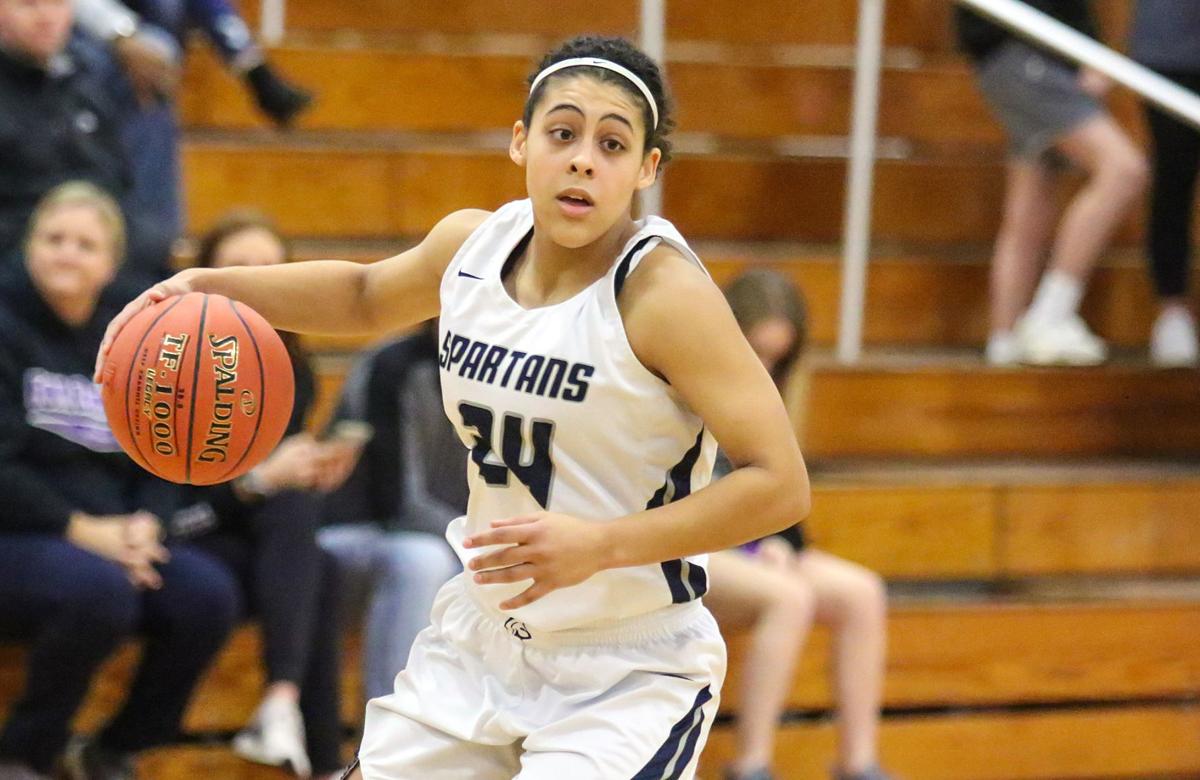 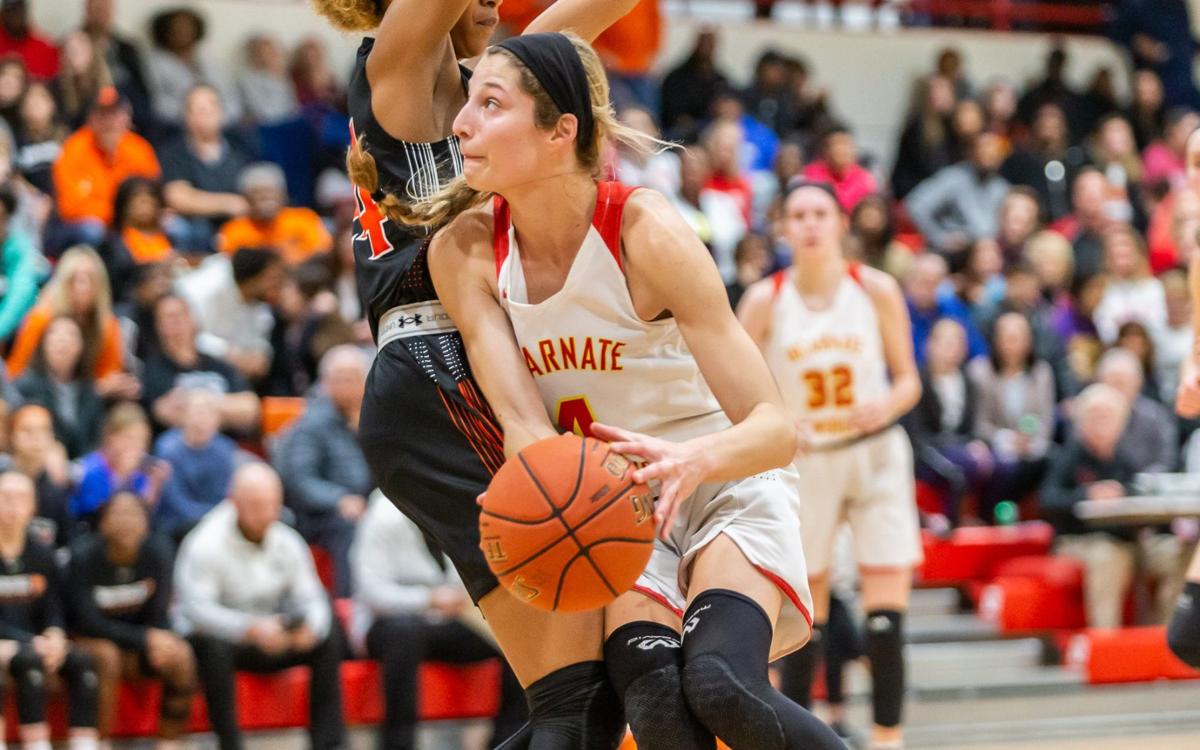 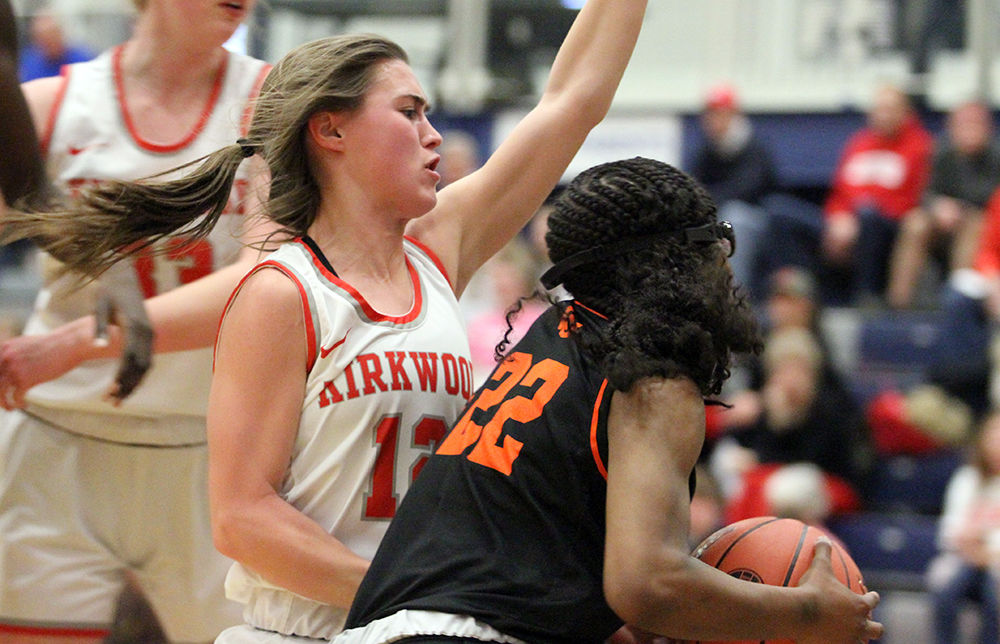 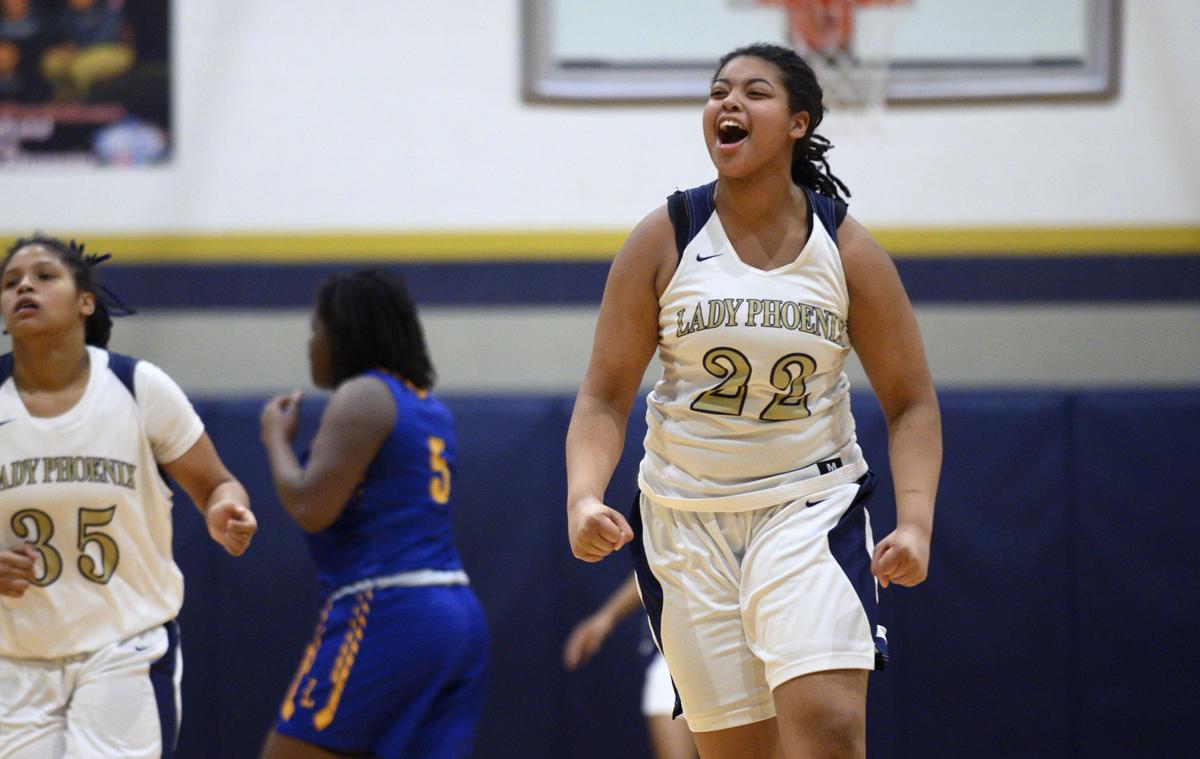 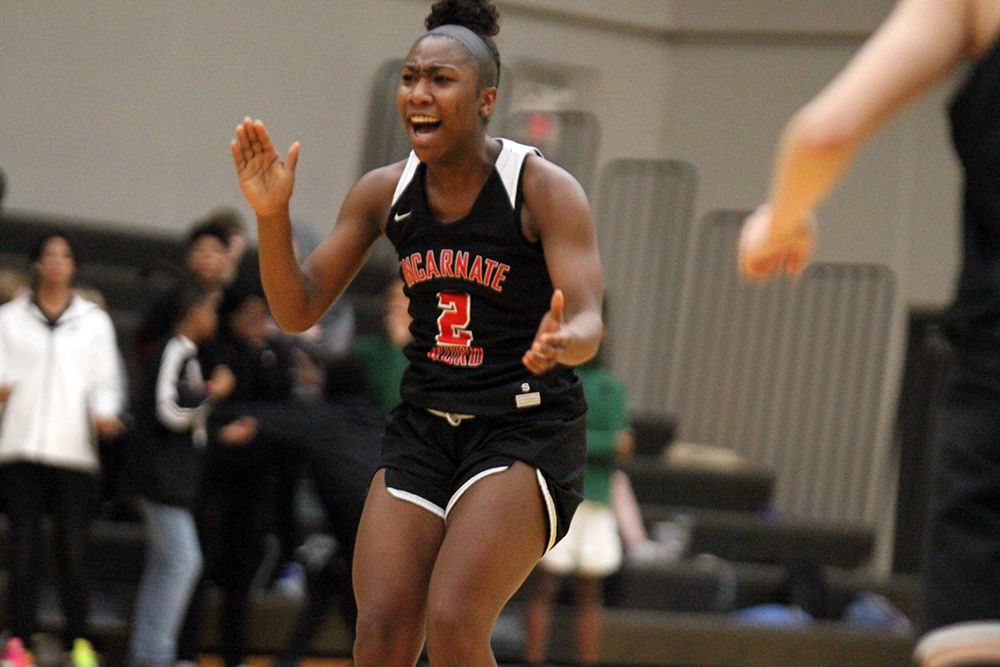 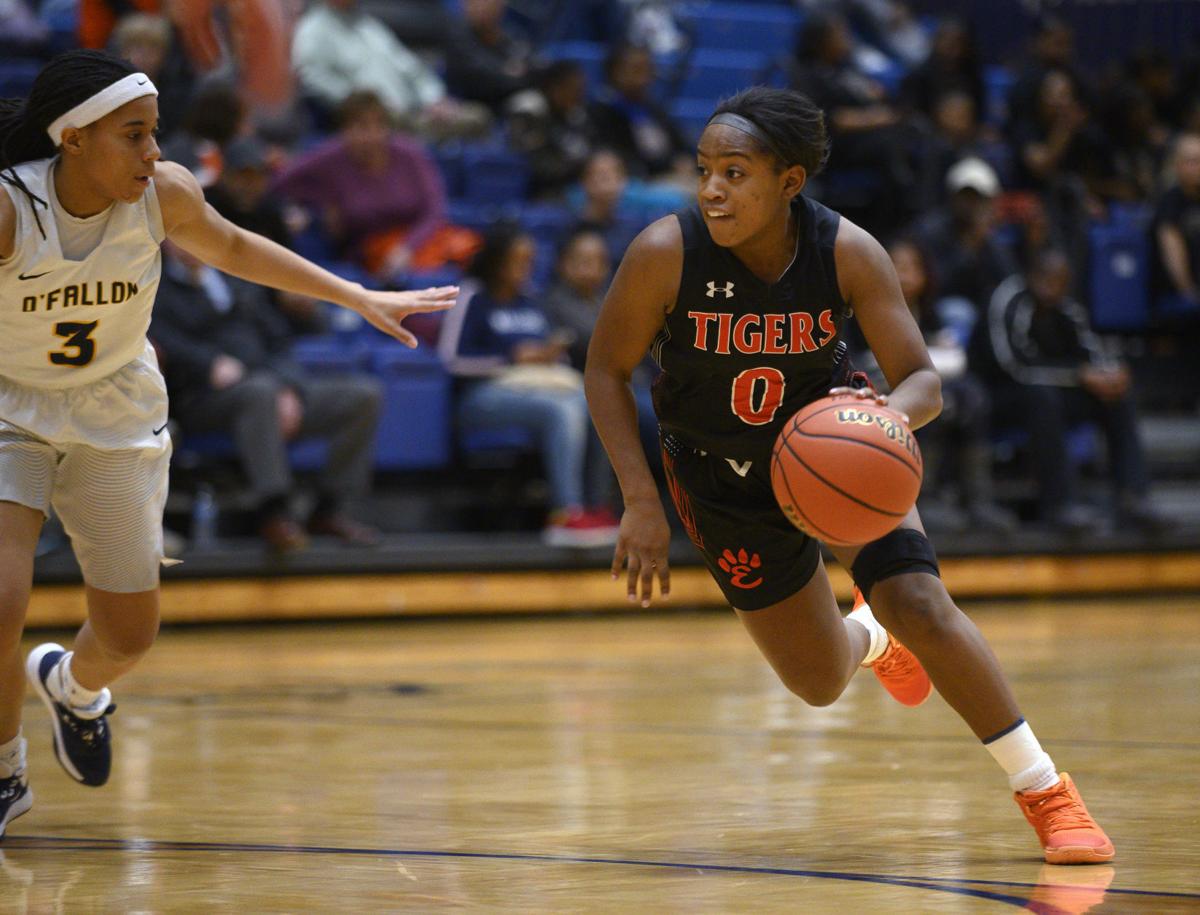 Edwardsville's Quierra Love (right) drives to the basket against O'Fallon's Kayla Gordon during the visiting Tigers' 68-65 overtime win on Feb. 11. 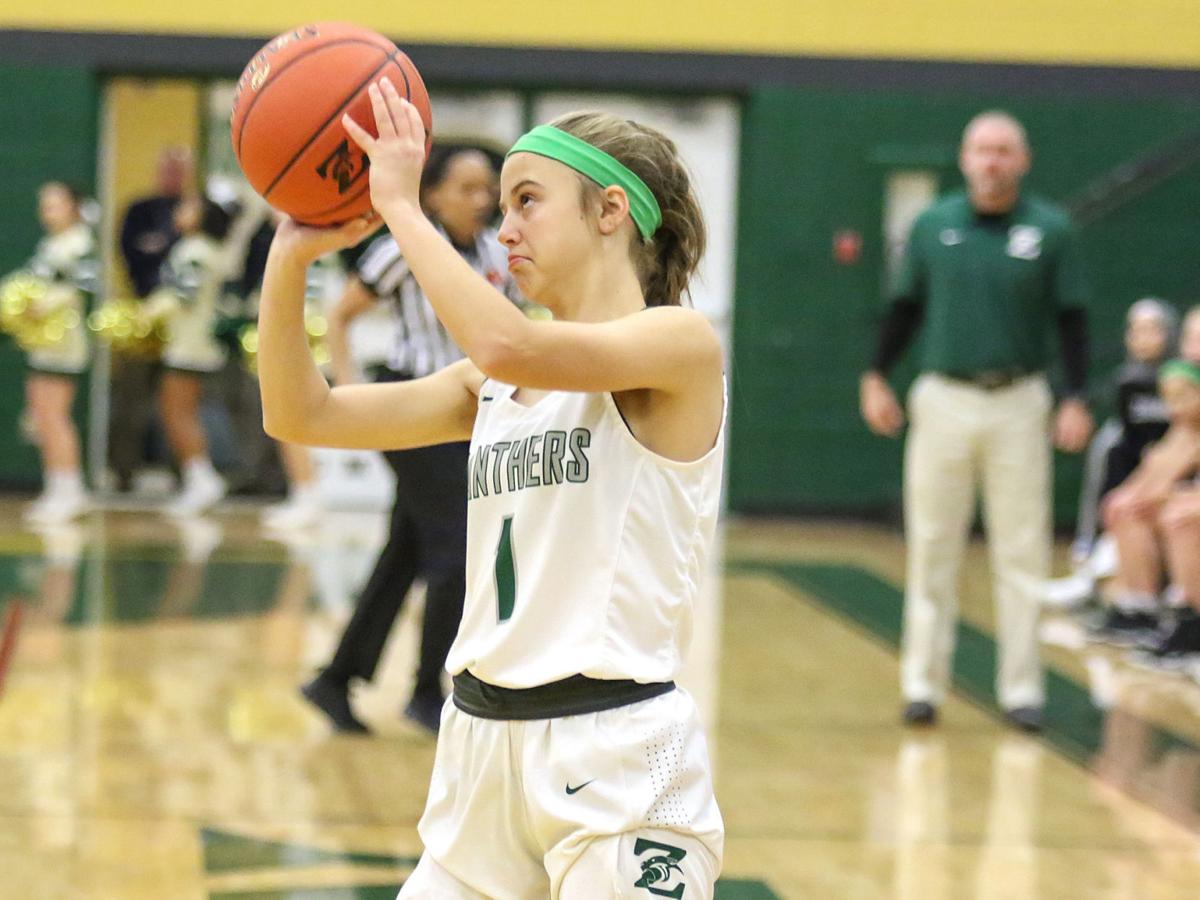 Fort Zumwalt North's Claudia Hoff shoots from the wing during a game earlier this season. 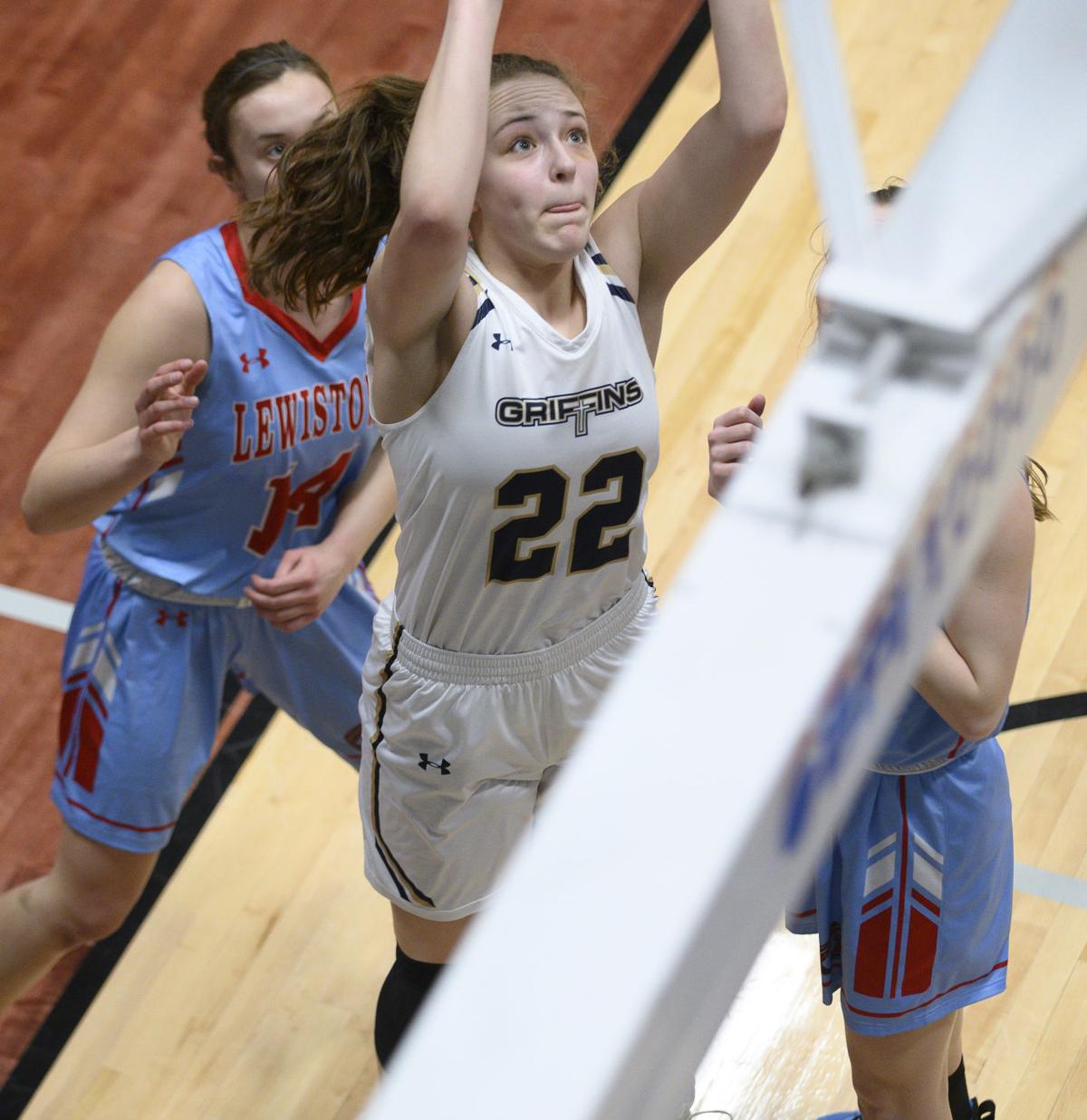 Father McGivney's Charlize Luehmann (22) goes up for a layup during the Class 1A Illinois College Super-Sectional on Monday, February 24, 2020 at Illinois College in Jacksonville, Ill. Paul Halfacre, STLhighschoolsports.com 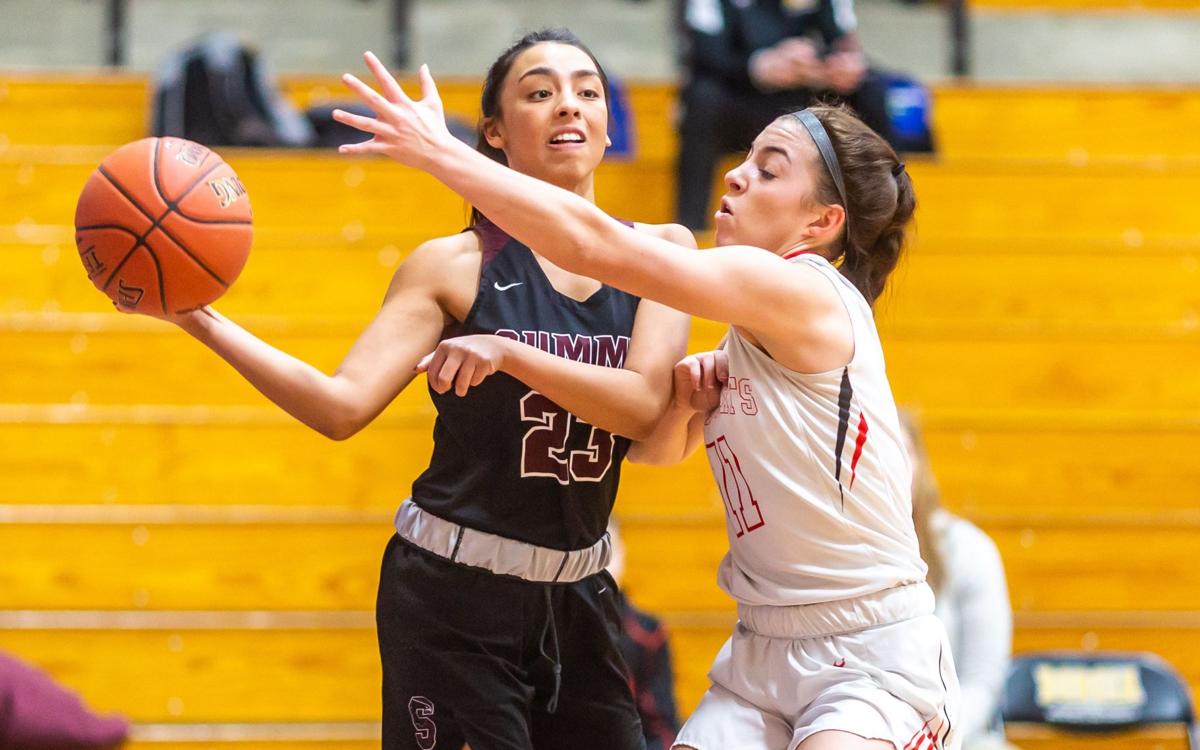 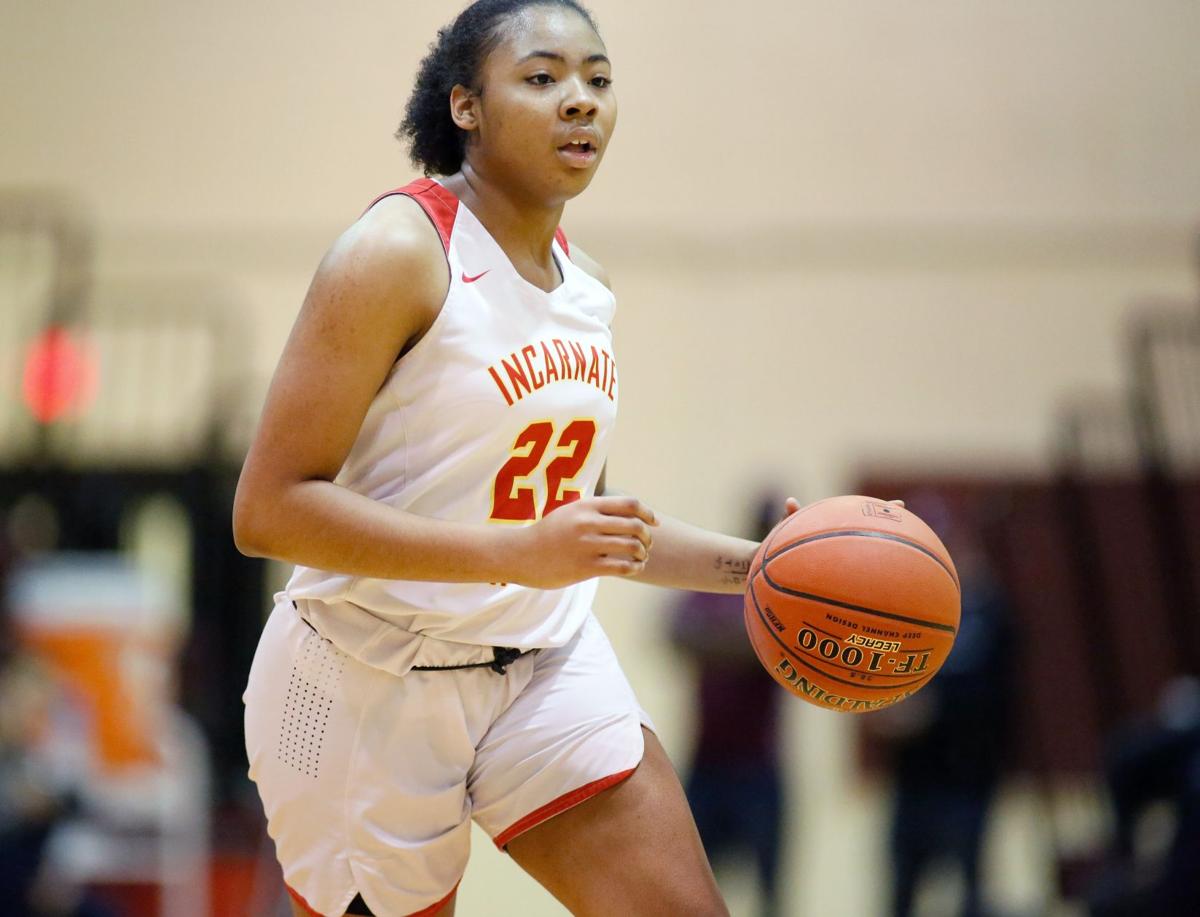 (In chronological order, as decided by STLhighschoolsports.com staff)

Sophomore guard Adrenna Snipes helps the Explorers earn a shot in the team's first tournament of the season as she drained a short jumper at the buzzer. Marquette would go on to win the Columbia Tip-off Classic. Marquette, which lost a seven-point halftime lead, was led by 28 points from Snipes.

"I knew we were down by one, so I had to get to the basket," said Snipes to Paul Halfacre. "When I got the ball, I know what to do. I'm fast and strong, so I just took it to the rim."

For the second time in six days, the Eagles managed to get the best of the Markers. After winning the title at the Marquette Tournament, Sullivan came back and improved its record to 5-1 with the victory. Senior forward Riley Lock led three Eagles in double figures with 14 points in the win.

A feverish fourth quarter comeback resulted in victory for the Pioneers. Down 29-18 with eight minutes left, Kirkwood climbed back. It was senior guard Natalie Bruns that led the way back as she wound up with 22 points for the Pioneers. She also added 15 rebounds to complete the double-double.

In a game that was tied at 68 at the end of regulation, Whitfield continued its scoring onslaught in overtime, outscoring the Jaguars 21-14 in four minutes. Whitfield, which went on to take third place in Class 3, was led by Jade Moore's 35 points. Marshaun Bostic's 33 points and 14 rebounds weren't too shabby, either.

In a battle that came down to the final seconds, Sullivan was able to bring home the championship of its own tournament. Kya Harbour and Mallory Shetley each came up with big baskets in the final 90 seconds. In the end, Shetley finished with 12 points and Harbour 10. Shetley also added a key steal and drew a charge.

"Winning a tight-game like this, against a real good team, is only going to help us down the road," said Harbour to Steve Overbey. "Just being able to handle the pressure is what we need."

For the second time in 15 days and what would be the second of three overall tournament championship games this season, Howell Central got the best of Lutheran St. Charles. After winning the Lutheran St. Charles Tournament by a point, Central won this one as Makayla Best led three Spartans in double figures. Jenna Grzeskowiak led Lutheran with 21 points.

The championship game of the Visitation Christmas Tournament came down to the final seconds as junior Ellie Vazzana provided the winner. She scored off a drive with four seconds left to score the winner. Vazzana's 19 points led three Red Knights in double figures in the win.

"I knew we could do it," said Vazzana to Steve Overbey about her confidence in taking the final shot. "Even if I messed up, I knew my team was going to have my back."

A solid effort from the Statesmen helped hand the Jays the team's first loss in 15 games and first since the Class 5 state title game the season before. Eliza Maupin led Webster with 14 points while Ja'Mise Bailey added 13 in the Union Tournament semifinal.

“This feels awesome because we worked so hard to get to this spot and we actually did it,” said Bailey to Jim Faasen. “We knew that we could beat them.”

Kelsey Harris hit her first 3-pointer of the game in the final minute to lift Miller past Lincoln to fend off a comeback and win a game at the MLK Showcase. She'd missed her first seven. Harris and Antuane Garrett both scored 13 points to lead the Phoenix.

“It was real risky, but we needed it,” said Harris to Ben Vessa of the shot. “I was wide open so I had to take it.”

Saniah Tyler scored six points in the final 30 seconds as Incarnate Word turned a 3-point deficit into a 3-point margin of victory on the road. She score nine of her game-high 25 points in the fourth quarter as the Red Knights earned victory in a key Metro Women's game.

“I'm the point guard and I am supposed to lead the team, so something like this shows I can lead the team,” said Tyler to Jim Faasen. “It's a huge win. It shows us that we can win every game, no matter the circumstances. That's what we've come to expect of ourselves, It's what we've got to expect.”

In a harbinger of things to come, O'Fallon gave Edwardsville all it could handle. While the Panthers would go on to beat the Tigers in a sectional semifinal game, here it was Que Love who would lead the way for Edwardsville with 18 points in the win. Sydney Harris backed that up with 15 of her own. It was Love's 3-pointer in overtime that gave the Tigers the lead for good.

"I just did it for my teammates," said Love to Paul Halfacre of the shot. "I'm glad they passed it to me and allowed me to take the shot."

In, perhaps, the longest game of the season in the metro area, the Panthers outlasted the Lions at home. In a game which featured 18 lead changes and 15 ties, it was Claudia Hoff who came through in the clutch as she drilled the game-winning free throw. Hoff scored 13 while Jaden Stahl and Jessica Clausner both scored 15 to lead North.

“I'm not used to that, but it is nice to have someone recognize you after you put in a lot of hard work,” said Hoff to Jim Faasen of her offensive success. “It's nice to finally show who I am as a player and it's great to have my teammates help me show it. My team has worked so hard, I just wanted to get this done for them.”

The Griffins made history in winning the first sectional championship in school history. Madison Webb led Father McGivney with 25 points while Charlize Luehmann added 10 points of her own in the win, which came just days after McGivney had won its first regional title in program history.

“Those last few seconds, that memory will always be in my mind. Our fan section just went crazy,” Luehmann said to Jim Faasen about the finish to the sectional. “I feel like I will remember that more than the score.”

In a game that was delayed from its originally planned date of completion, Union took home the title of the Borgia tournament by holding off the Falcons. Reagan Rapert led the way for Union with the game-winning 3-pointer with less than two minutes left as she led the team with 23 points to cap a comeback. Jasmine Manuel led Summit with 18 points.

“We got down eight but we were acting like we were down 40,” Union coach Pat Rapert said to Jim Faasen about a second half deficit. “I told them to chip away at this and I am probably more proud of this win than any other because we had to come back and do that.”

In a game that could stake a claim for game of the year, Jaiden Bryant sealed the victory on a 3-pointer with 2.3 seconds left to play as the Red Knights won a Class 4 quarterfinal at St. Charles West. Ladue fought back from a 9-point deficit and even took the brief lead before what would end with Bryant's heroism. Bryant led three Incarnate players in double figures with 18 points.

“I knew I had to make this shot if we were going to win and go to state,” said Bryant to Ben Vessa. “I was in the right spot at the right time and I just knocked it down.”

Edwardsville's Quierra Love (right) drives to the basket against O'Fallon's Kayla Gordon during the visiting Tigers' 68-65 overtime win on Feb. 11.

Fort Zumwalt North's Claudia Hoff shoots from the wing during a game earlier this season.

Father McGivney's Charlize Luehmann (22) goes up for a layup during the Class 1A Illinois College Super-Sectional on Monday, February 24, 2020 at Illinois College in Jacksonville, Ill. Paul Halfacre, STLhighschoolsports.com