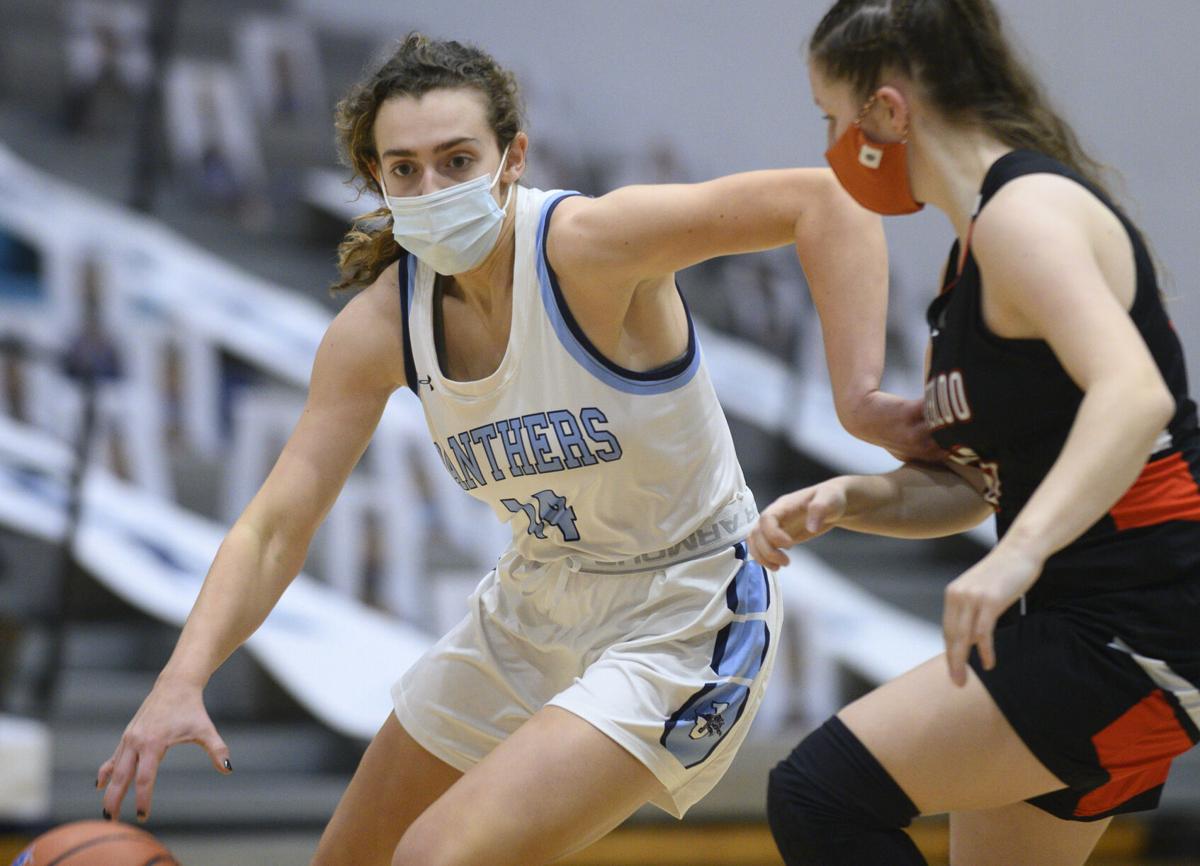 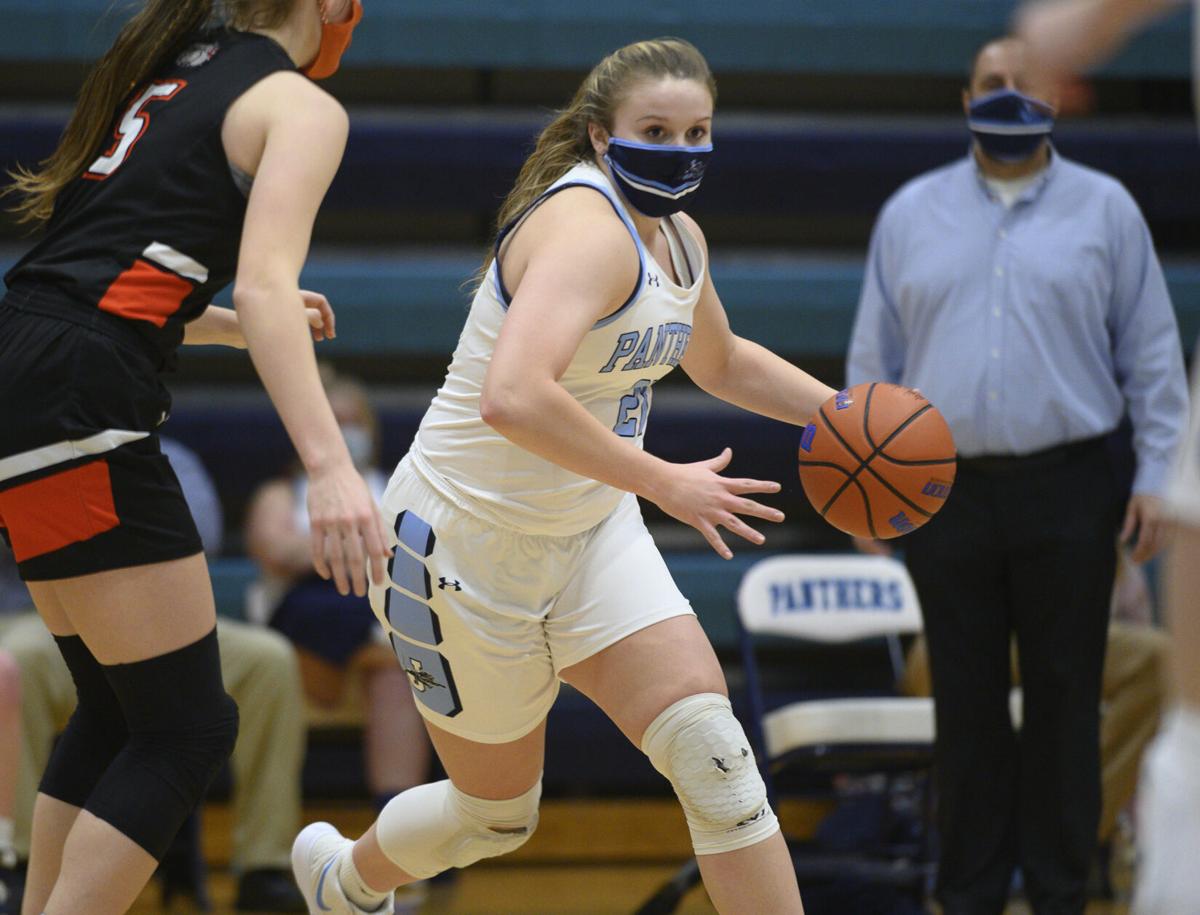 Jerseyville's Boston Talley (21) looks to get past the defense during a girls basketball game on Thursday, February 18, 2021 at Jerseyville High School in Jerseyville, Ill. Paul Halfacre, STLhighschoolsports.com 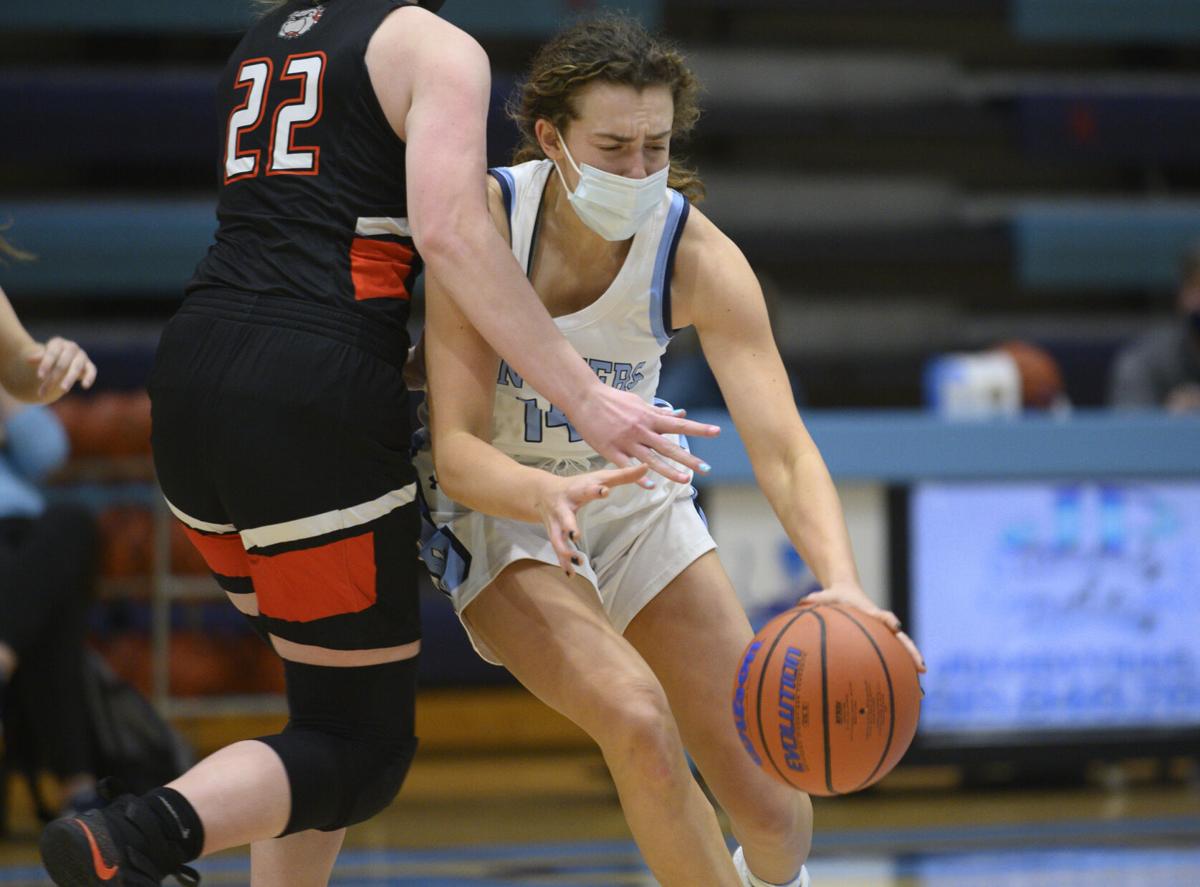 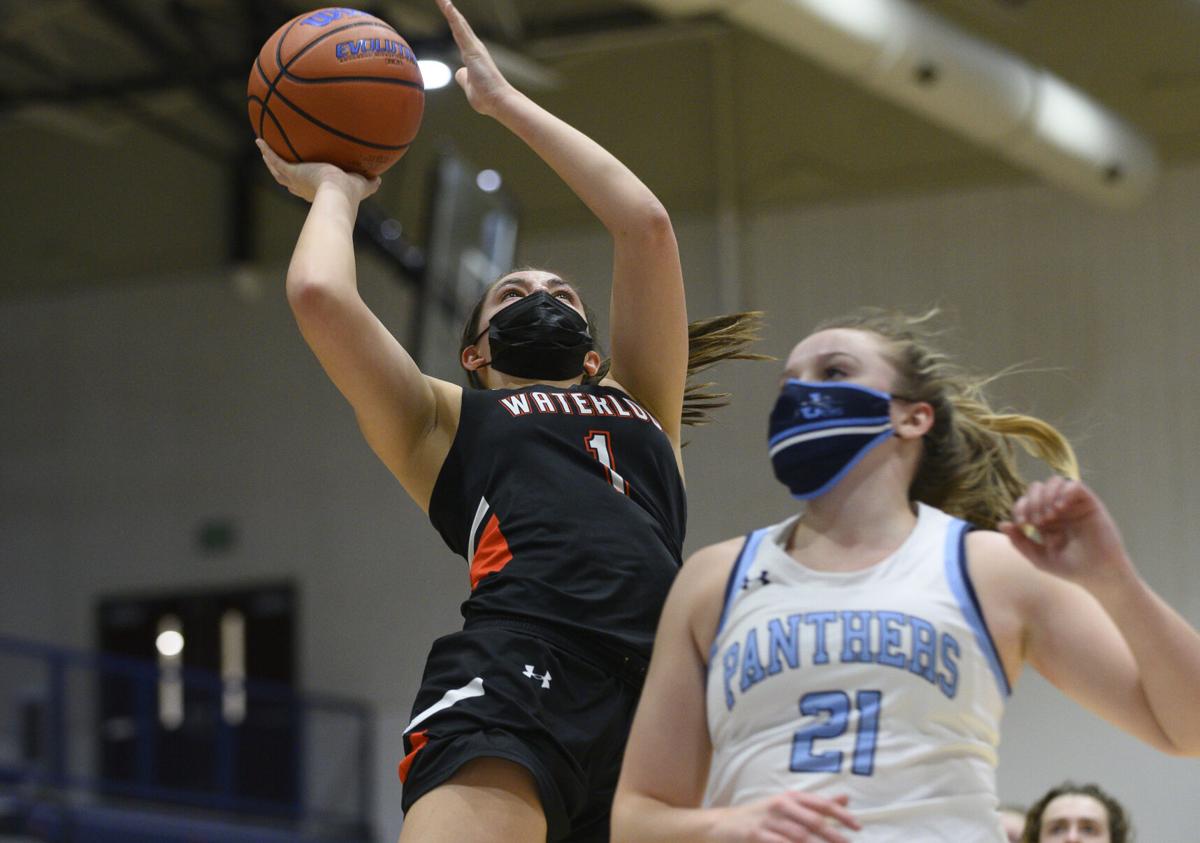 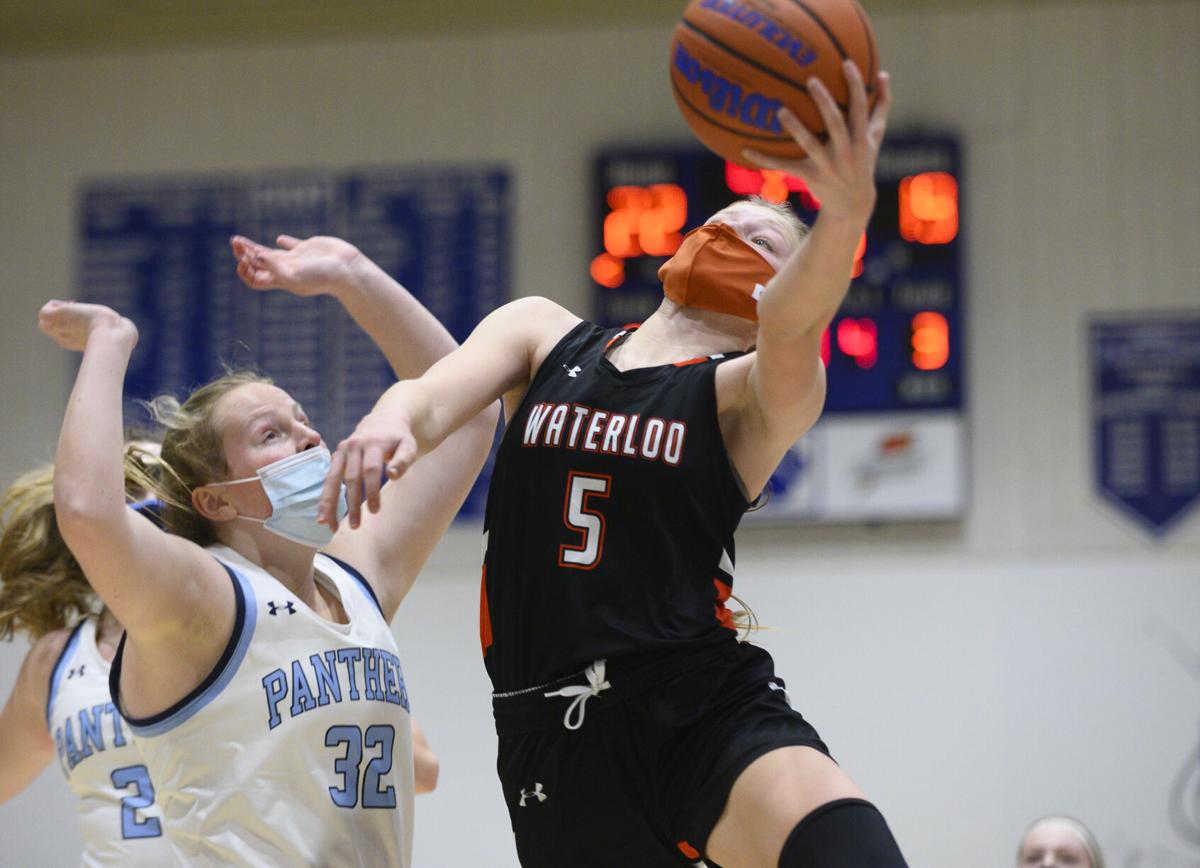 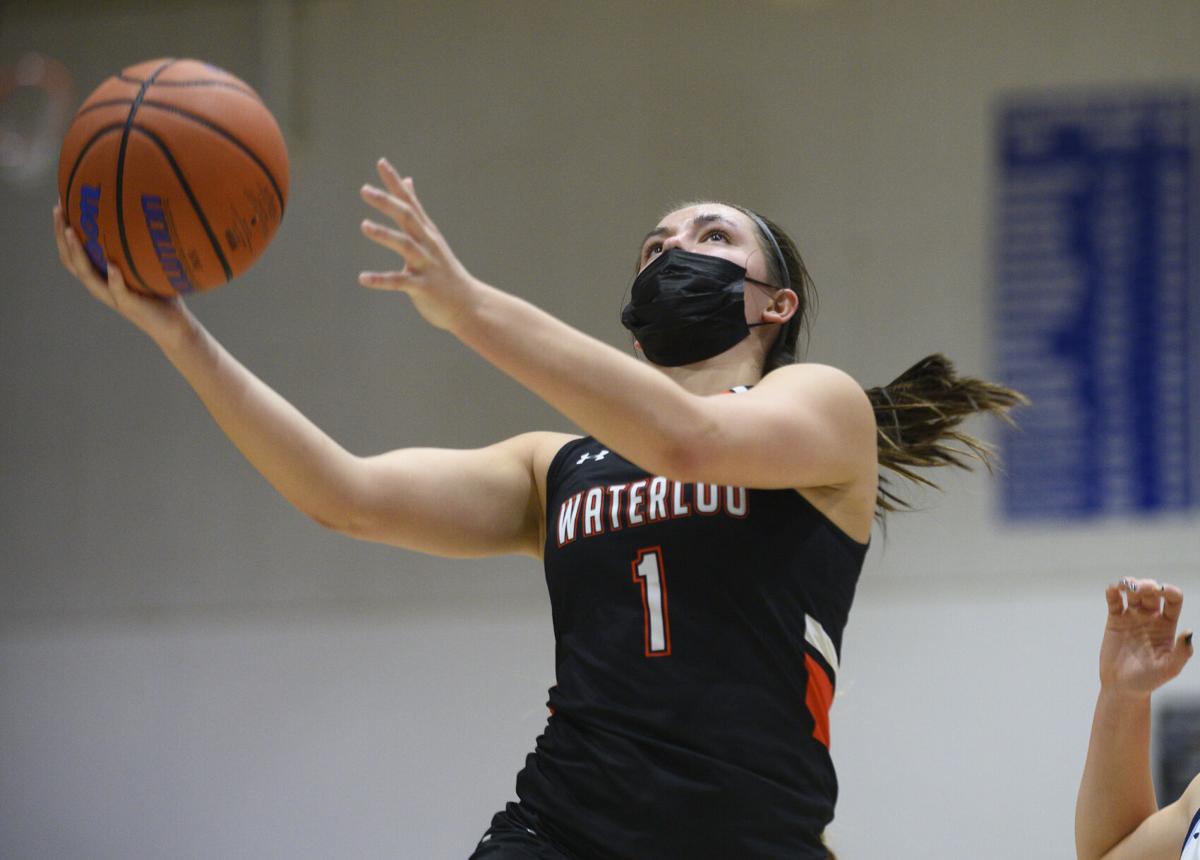 Waterloo's Sam Lindhorst (1) goes up for a layup during a girls basketball game on Thursday, February 18, 2021 at Jerseyville High School in Jerseyville, Ill. Paul Halfacre, STLhighschoolsports.com 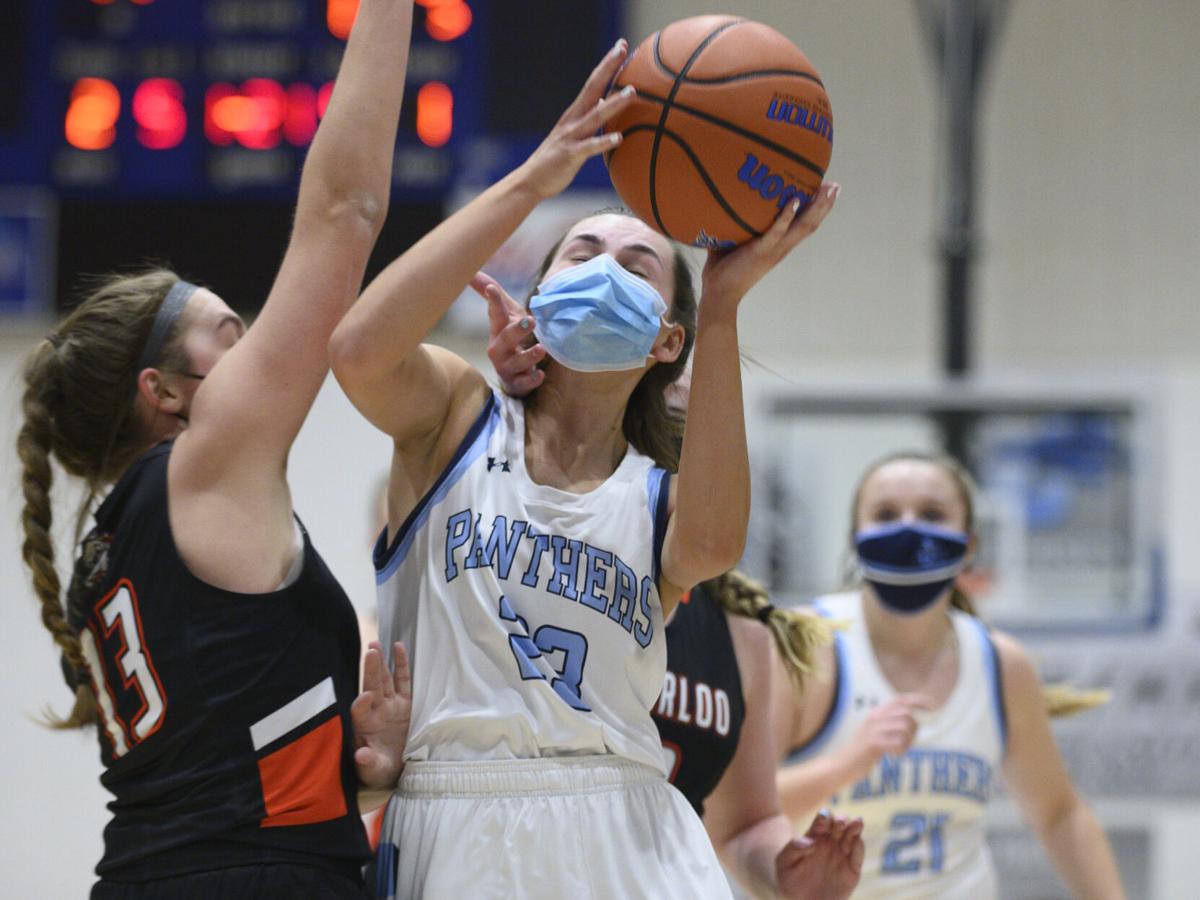 JERSEYVILLE — Grace Myers' first step wasn't backward when the shot went up from her teammates.

The Jerseyville senior did that earlier in the game and got tired of it. Instead of getting ready for defense, she pounced on the opportunities for more offense.

"I decided that I wanted the ball more," Myers said.

Myers and the rest of her teammates cranked up the intensity Thursday on the offensive glass in the second half and powered their way to a 68-46 victory over Waterloo in a Mississippi Valley Conference girls basketball game at Jerseyville High School.

"First half we didn't really go for those rebounds, nor were we boxing out, but we definitely emphasized that at the half," Myers said.

Jerseyville (5-0 overall, 1-0 MVC) defeated its conference foe for the 10th consecutive time and notched its best start to a season in the past 20 seasons.

"We've got really veteran players that have been through the wars and tonight was one of that situation where they turned it on," Jerseyville coach Kevin Strebel said. "They realize what they needed to do and really turned it on in the second half."

"Rebounding really killed us in the second half," Waterloo coach Tim Augustine said. "I think our depth really came into play and that took its toll tonight."

Seniors Sally Hudson and Boston Talley poured in 13 points each for the Panthers.

"We got into our rhythm just by five players running the floor and not let them stand and wait on us to start our offense," Strebel said. "We started that offense in transition and we did a much better job of that."

Jerseyville has been a house of horrors for Waterloo, dropping its 23rd consecutive game on the road to its conference foe.

Waterloo (1-1, 0-1 MVC) sophomore guard Sam Lindhorst powered her way to a game-high 19 points but was limited to just four points in the second half.

"Every time (Lindhorst) and (Norah Gum) drove to the basket, we had to make sure they were running into traffic," Strebel said. "Especially (Lindhorst) because if she doesn't, she's really good at getting to the rim with those big strides and her explosiveness."

Laura Werner calls it a chuck and a prayer.

The Lift For Life girls basketball team couldn’t let the boys have all the fun.

Jerseyville's Boston Talley (21) looks to get past the defense during a girls basketball game on Thursday, February 18, 2021 at Jerseyville High School in Jerseyville, Ill. Paul Halfacre, STLhighschoolsports.com

Waterloo's Sam Lindhorst (1) goes up for a layup during a girls basketball game on Thursday, February 18, 2021 at Jerseyville High School in Jerseyville, Ill. Paul Halfacre, STLhighschoolsports.com