Become a Member
Read Today's E-edition
Share This
Lutheran St. Charles holds off upset bid from tournament's No. 7 seed
0 comments
Share this
1 of 2 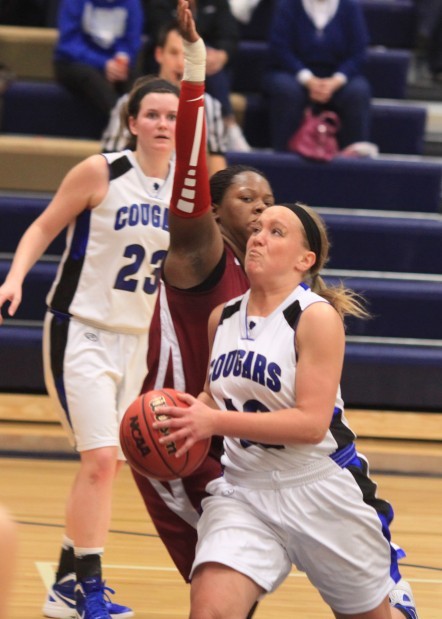 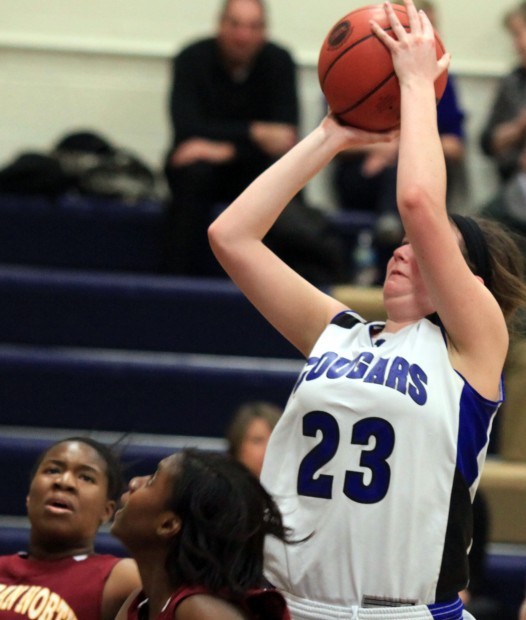 What looked like it was going to be a cakewalk against a three-win team probably wasn’t going to be that way because, in the postseason, everyone’s fighting for their basketball lives.

The second-seeded Cougars got all they could handle and more from the Crusaders – the No. 7 seed – in a hard-fought 48-40 win in the teams' Class 3 District 7 tournament first-round game at Principia.

“This is district basketball,” Pauk said. “Are you always going to have your best game? No. Things are going to happen that are out of your control. The bottom line is that you have got to come out, make plays and win.”

The key stretch of play came at the onset of the second half.

After the game went to intermission tied at 21, the Cougars (18-8) opened the half by scoring the first eight points.

Claire Schoedel and Jamie Skerston each scored three points in the run.

“We talked at halftime about how we had to do everything it takes to win,” Skerston said. “No one wanted it to be their last game, so we had to fight hard to win.”

Skerston did her share, indeed. She scored 12 of her game-high 16 points in the second half.

Five of the points came in the third quarter as Lutheran St. Charles opened up a 37-28 lead with eight minutes left.

The first half featured a scoring battle between Lutheran St. Charles’ Lauren Orr, who had 10 points, and Lutheran North’s Khalia Miller, who had eight.

North coach Katie Baumann said she was pleased with the effort from the young Crusaders (3-22).

“We believed in ourselves (in the first half),” Baumann said. “We’ve had trouble putting four quarters together. Our problem has been the second quarter usually, but tonight it was the third quarter.”

Orr added 12 points for the Cougars, while Miller had 15 to pace the Crusaders.

The win means Lutheran St. Charles will next play in a 7 p.m. district semifinal Wednesday against Whitfield.

“I’ve kind of been keeping my eye on (them) throughout the season,” Pauk said.

Follow all of the playoff brackets here. In other district basketball action:

NORTH TECH 44, ORCHARD FARM 38 • In a mild upset at Principia, the fifth-seeded Golden Eagles held off a late charge from the tourney's No. 4 seed.

North Tech (12-12) led by double digits in the third quarter and by nine at quarter’s end before Orchard Farm came charging back.

“I told them even though we didn’t win, they played like champions,” Orchard Farm coach Kyle Elmendorf said. “I couldn’t be any more proud of the way they battled back.”

A 3-pointer by Casey Mann tied the game at 38 with 1:03 left before North Tech scored the final six points.

“We had momentum on our side and we were doing a good job getting shots,” Elmendorf said. “We had a little breakdown, but down the stretch, it was still a one-possession game. We had a few costly turnovers that put them at the line.”

A main reason for North Tech jumping to a 17-12 halftime lead and widening it in the second half was the 47-18 rebounding margin for the Golden Eagles.

“I was really happy that we held them to 17 points in the first half,” Elmendorf said of the Eagles’ defense. “In the second half, it was the second chance opportunities they got. You have to give them credit.”

PRINCIPIA 63, NORTHWEST ACADEMY 13 • The top-seeded Panthers got off to a rip-roaring start in its district opener.

Principia (23-3, No. 5 in the STLhighschoolsports.com small-schools rankings) outscored Northwest Academy 23-0 in the first quarter on its way to coasting to the victory.

Whitfield (16-9) led by five points after the first quarter, but it wasn’t until a 17-5 fourth quarter advantage the Warriors truly put the game out of reach.

The semifinal round is set for Wednesday as Principia and North Tech will square off, while Whitfield and Lutheran St. Charles will also vie for a spot in the championship final, which is 6 p.m. Friday.