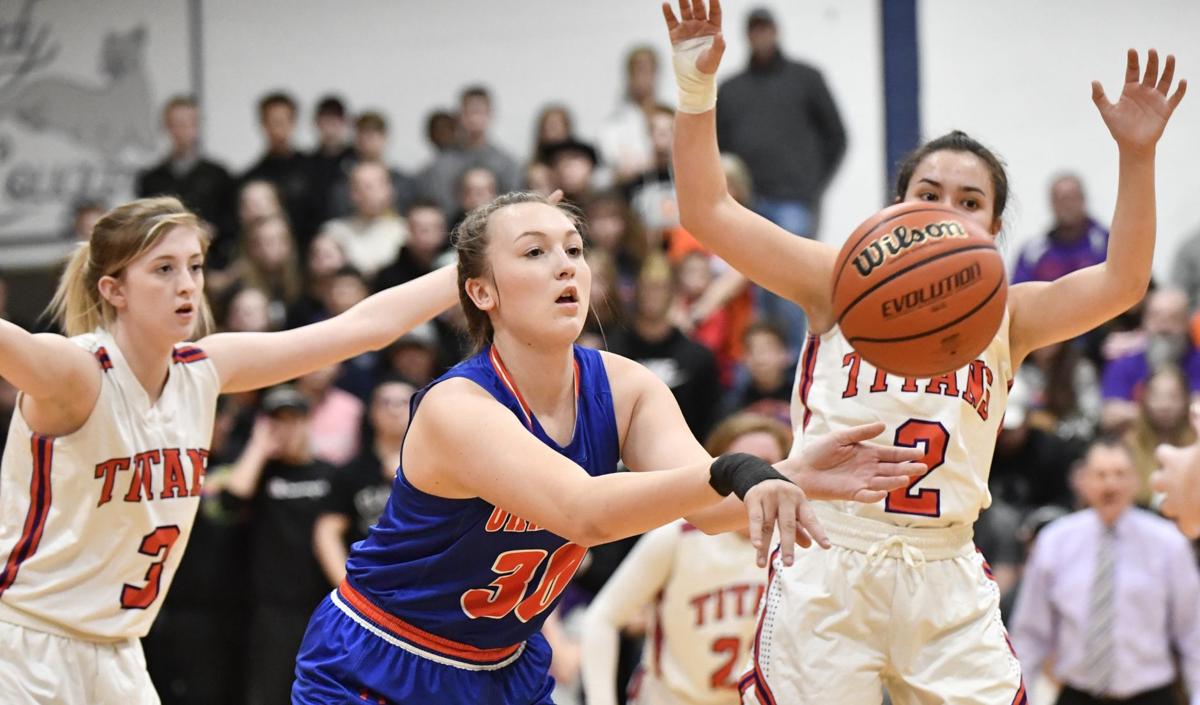 Okawville center Delaney Toensing (center) passes as she is double-teamed by Hume Shiloh's Cailynne Phillips (left) and Melia Eskew during the Class 1A South Central Super-Sectional on Monday, Feb. 24, 2020 in Farina, Ill. Tim Vizer/Special to STLhighschoolsports.com 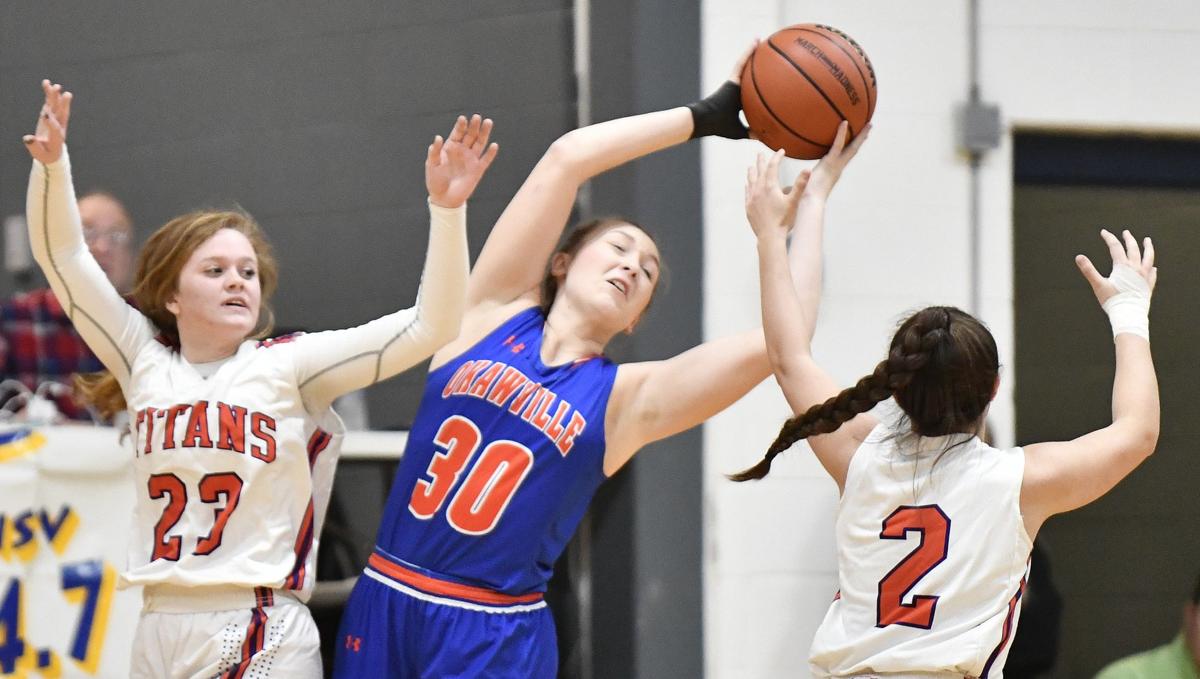 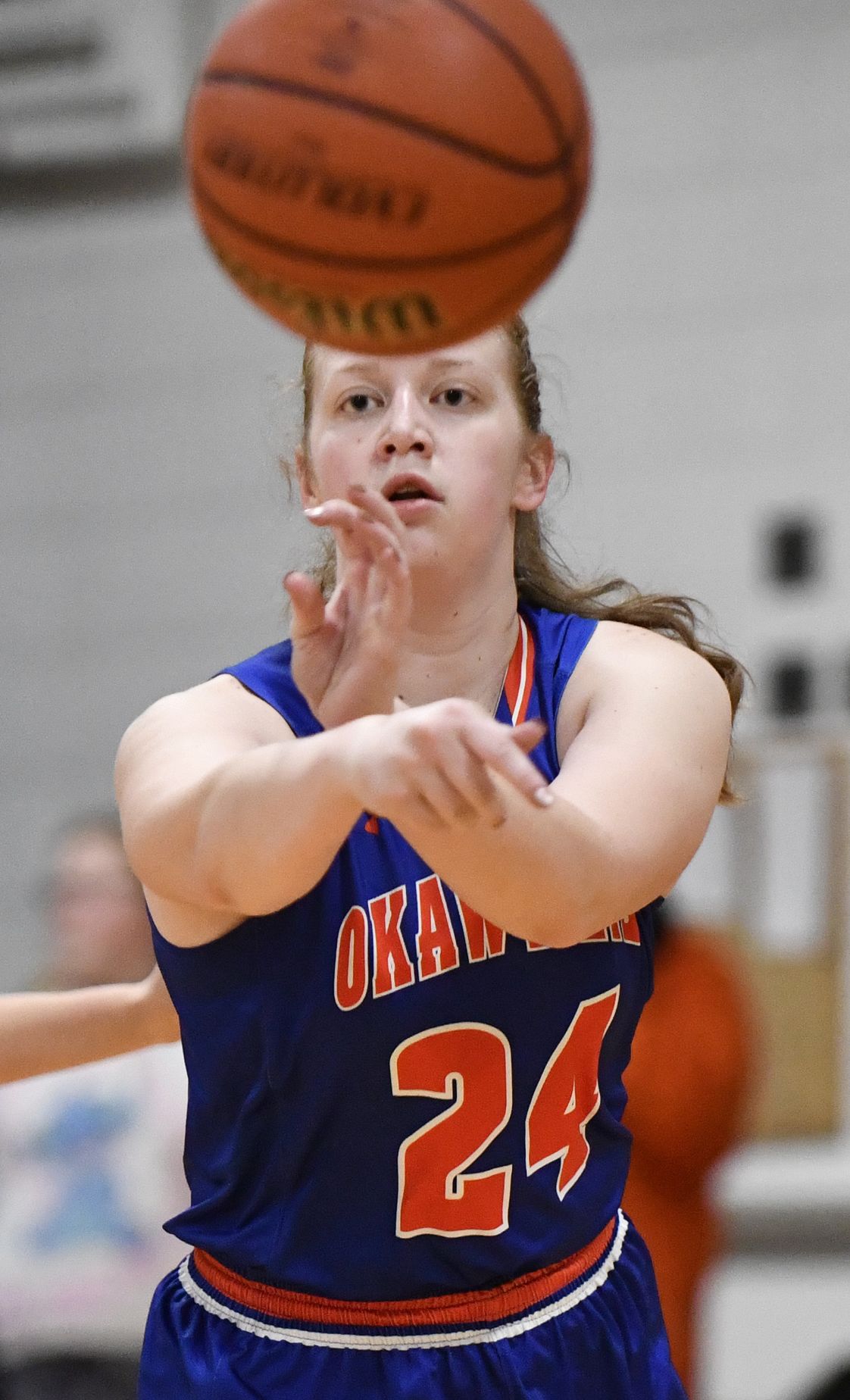 The Okawville High girls basketball coach was able to reflect on an emotional year after the Rockets dropped a 57-50 decision to Hume-Shiloh in the Class 1A South Central Super-Sectional.

A former standout guard at Okawville and the University of Colorado, Hasheider-Burianek was diagnosed with breast cancer in May.

She managed to guide her team into the elite eight despite suffering through a long series of grueling treatments.

Her illness galvanized the tiny Washington County town and that was evident by the large Okawville contingent that made the trip for the contest.

"This has been a magical year (with) a great group of kids," Hasheider-Burianek said. "They got me through my battle and helped take care of things on the court.

The Rockets (18-14) were never able to overcome a slow start on Monday. They fell behind 10-2 and 28-18 in the first half before rallying from 15 down in the third quarter to get within four late in the contest.

"Too big of a hole," explained Okawville freshman guard Briley Rhodes, who led her team with 14 points. "Just too big."

Freshman Megan Rennegarbe added 10 points for the Rockets, who were looking for their eighth trip to the state tournament. Senior Delaney Toensing chipped in with nine.

Okawville trailed 40-25 with 4 minutes, 36 seconds left in the third quarter before charging back to within 50-46 on a 3-pointer from Rhodes with 1:32 remaining.

But the Titans (29-5), who finished fourth in the state last season, hit nine of 10 fouls shots down the stretch.

Hume Shiloh will face Lanark Eastland (32-3) in a state semifinal at 11:15 a.m. on Friday at Redbird Arena in Peoria.

Tayler Berry led the Titans with a game-high 25 points. The only starter back from last year's team, she knew the Rockets would make a late run.

"We held them off with our defense," Berry said. "Us, as a team, we win games more with defense than offense."

Berry received a huge cut above her eye seconds into the contest. She returned two minutes later and turned in her strongest effort of the season.

"I didn't like sitting out, even for a few minutes," she said.

The Rockets struggled finding the range over the first 20 minutes. They missed seven of eight shots to begin both the first and second quarters.

"It just wasn't going our way to start the game," Hasheider-Burianek said. "We've got to make adjustments."

Senior Megan Schleifer and sophomore Raegan Luechtefeld made key shots to trigger the comeback. Schleifer's triple at the outset of the final period trimmed the deficit to 46-39. Rennegarbe followed with a pair of foul shots to get her team to within five.

The Rockets, who had a five-game winning streak snapped, simply came up short down the stretch. Rhodes believes it would have been a different game without the sluggish start.

"We're young and we needed to relax a bit and get settled into it," Rhodes said. "Once we got going, we felt good. It was just too late."

Hasheider-Burianek lamented the difficult first half.

"Things just went against us right from the start," she said. "I'm ready for a rematch."

Added Rhodes, "If we played them again we could beat them."

Rhodes and the rest of the players were happy to help Hasheider-Burianek though her difficult stretch. The veteran bench boss never missed a practice or game despite regular cancer treatments in St. Louis.

"She's always been there for us so we know we have to give it back to her during these times," Rhodes said. "I hope we've made her happy."

Okawville center Delaney Toensing (center) passes as she is double-teamed by Hume Shiloh's Cailynne Phillips (left) and Melia Eskew during the Class 1A South Central Super-Sectional on Monday, Feb. 24, 2020 in Farina, Ill. Tim Vizer/Special to STLhighschoolsports.com