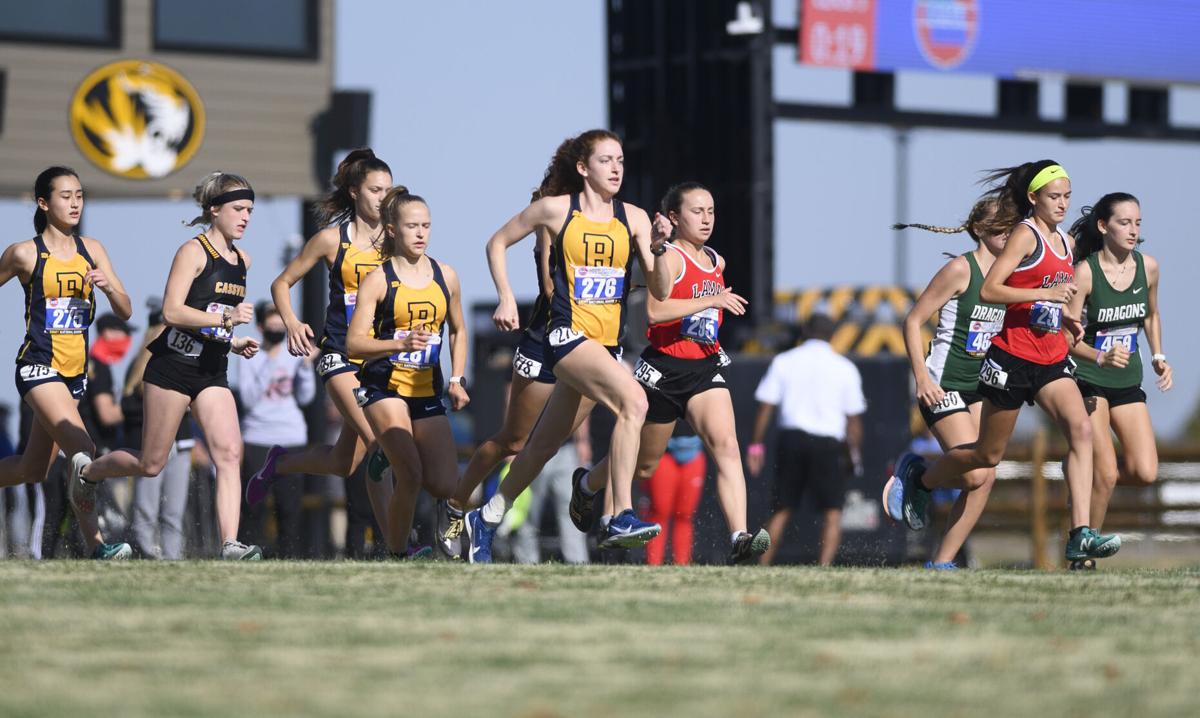 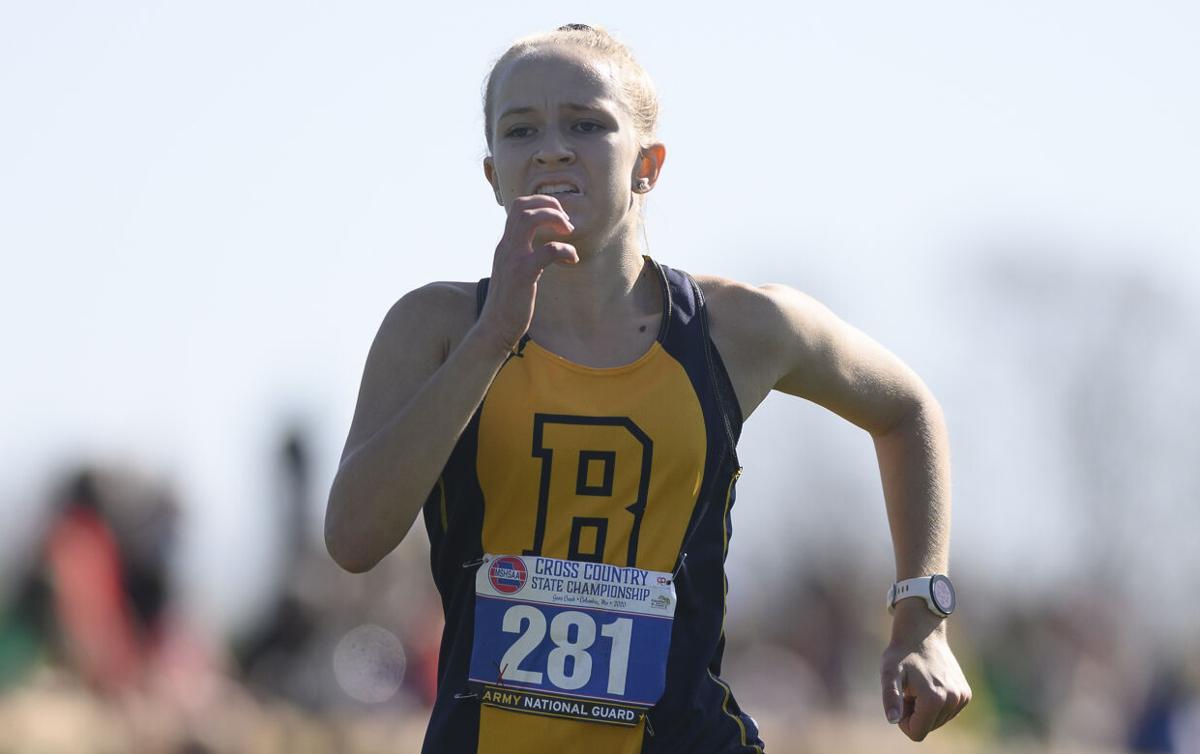 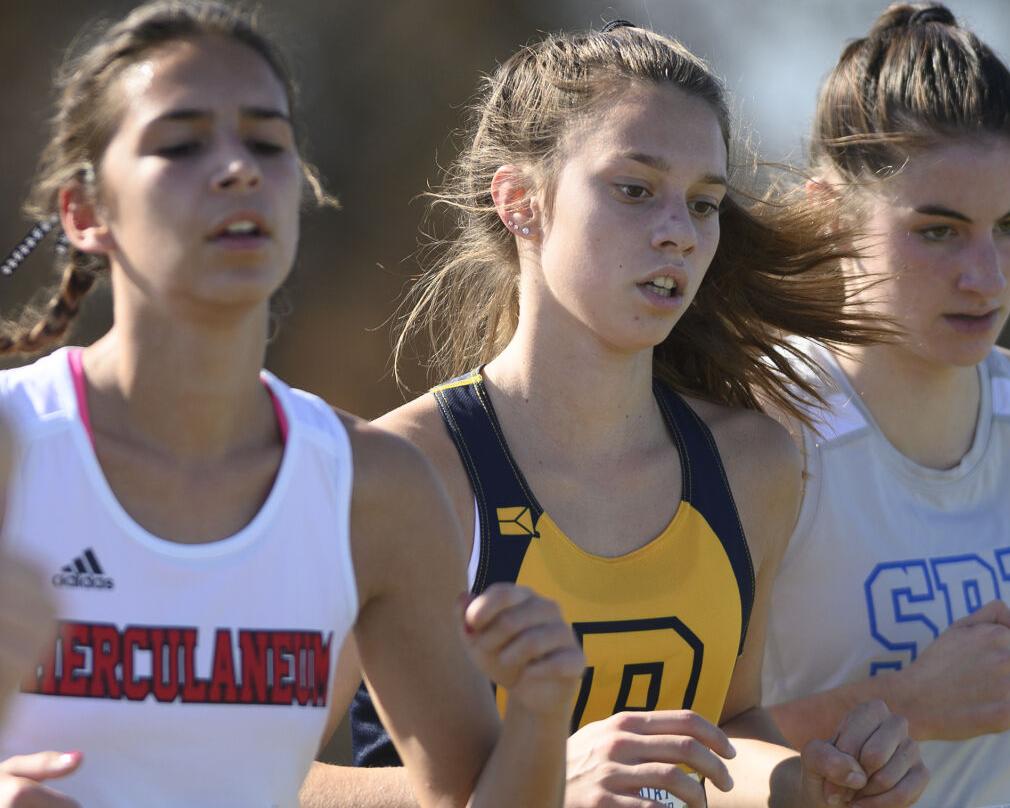 COLUMBIA, Mo. — It didn’t sink in when the final runner crossed the finish line. Even when all the points had been totaled, John Burroughs cross country Christine Bugnitz still was skeptical.

And she still couldn't believe it.

"They've worked so hard and for everyone here, it's been a strange season but we kept working," Bugnitz said. "It all came together at the right time and I really believe that team leadership is really what did it."

The accomplishment sank in Thursday afternoon when the Class 3 girls cross country state championship trophy was presented to the Bombers for the first time in program history.

"I'm proud of my teammates for all the hard work they put in and how they showed out," John Burroughs senior Kylie Goldfarb said.

It was the fourth top-four finish in program history but first since finishing third in the Class 2A-1A division 1997, which was the last season the Missouri State High School Activities Association had only three classifications for girls cross country. This is the first season MSHSAA expanded to five classes for cross country, and the Class 3 girls race was the first of an expanded three-day state format because of the COVID-19 pandemic.

The Bombers had never finished higher than third in the team standings and hadn't qualified as a team for state since 2017.

They were led by Goldfarb, a Yale commit who was the individual runner-up with a time of 18 minutes and 54.4 seconds. She was edged out by Lutheran South senior Macy Schelp, who won the title with a time of 18:54.3.

"I'm proud of my performance," Goldfarb said. "Of course I wanted to win, but Macy and I are good friends and I'm so proud of her."

The Bombers had three runners earn individual all-state honors for top-25 finishes. Goldfarb’s second-place showing was followed by junior Corinne Spetnagel in ninth in 20:17.1 and sophomore Gabriella Nichols in 18th in 20:37.7.

Allie Turner, a freshman, was just behind in 26th with her time of 21:01.5 and sophomore Madeline Buchowski closed out John Burroughs’ scoring effort by crossing 53rd in 22:00.9.

"I told them that this was the team I've waited 26 years for," Bugnitz said. "Not just for their running ability, but who they are and the leadership."

Goldfarb, Spetnagel and Nichols were the only Bombers runners with state meet experience. Goldfarb won an individual title as a freshman in 2017, was runner-up as a sophomore and senior and finished fourth last season.

The all-state finish was the first for both Spetnagel and Nichols, who will be program leaders going forward.

"We were just trying to build upon ourselves and get through anything,” Spetnagel said.