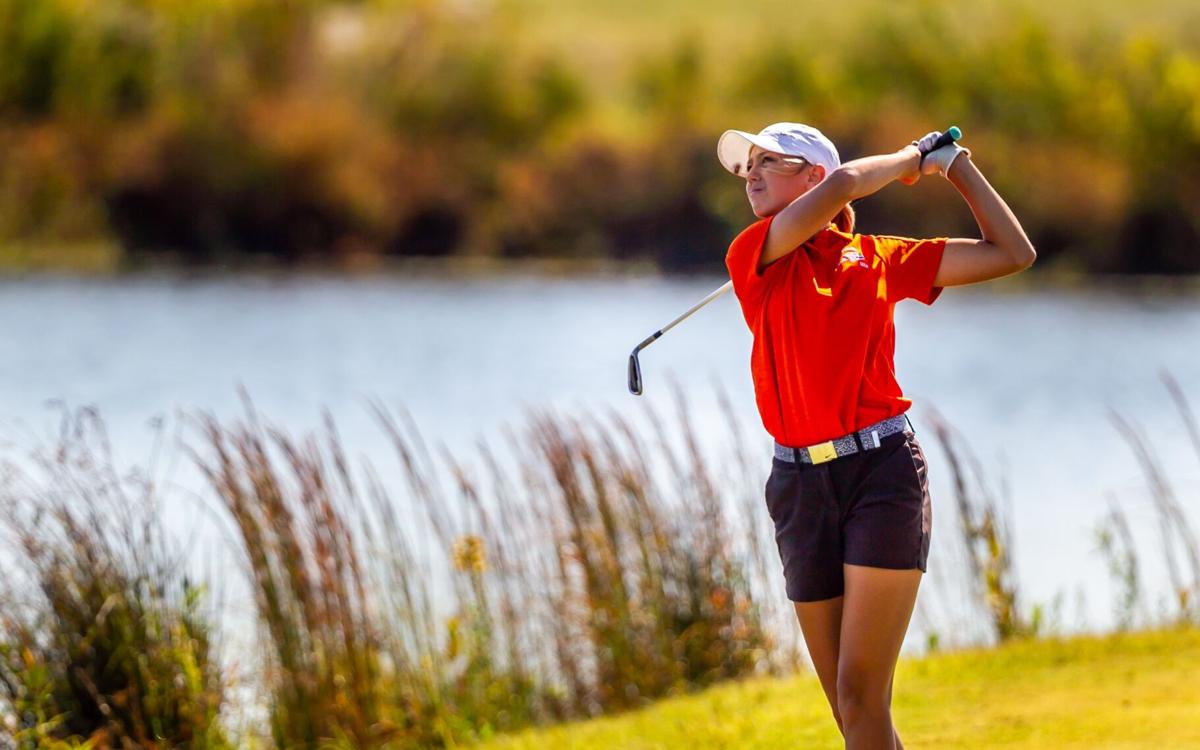 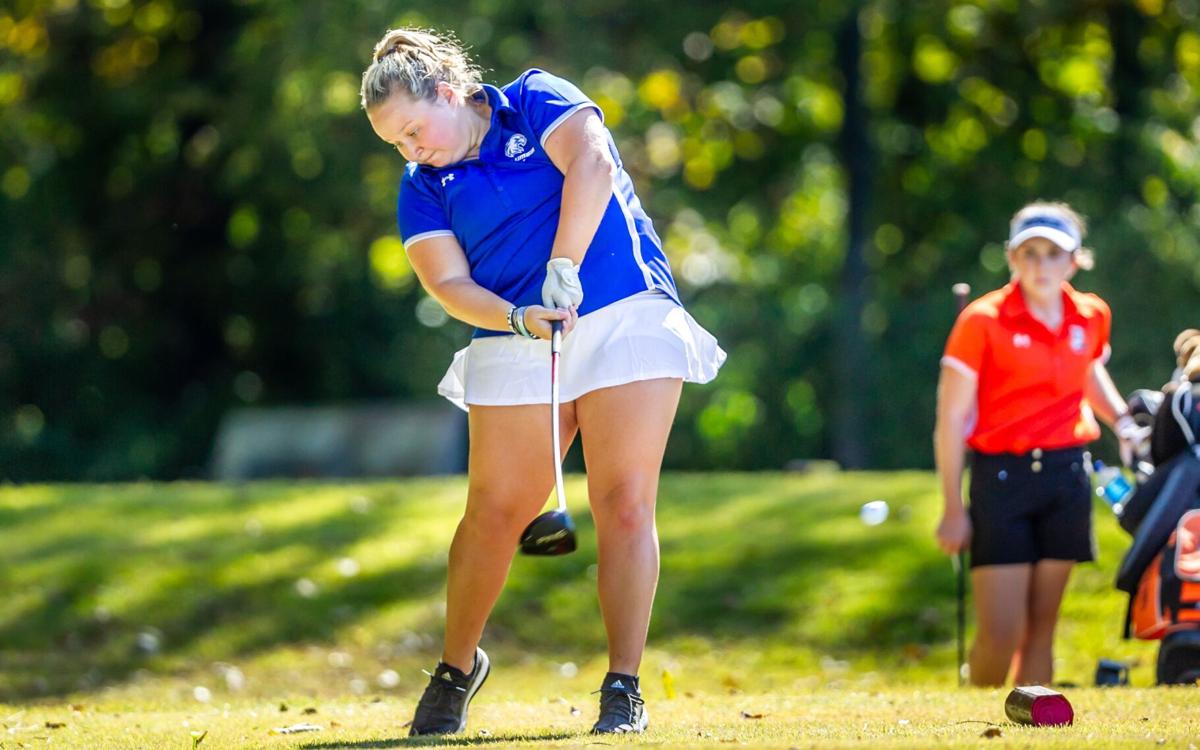 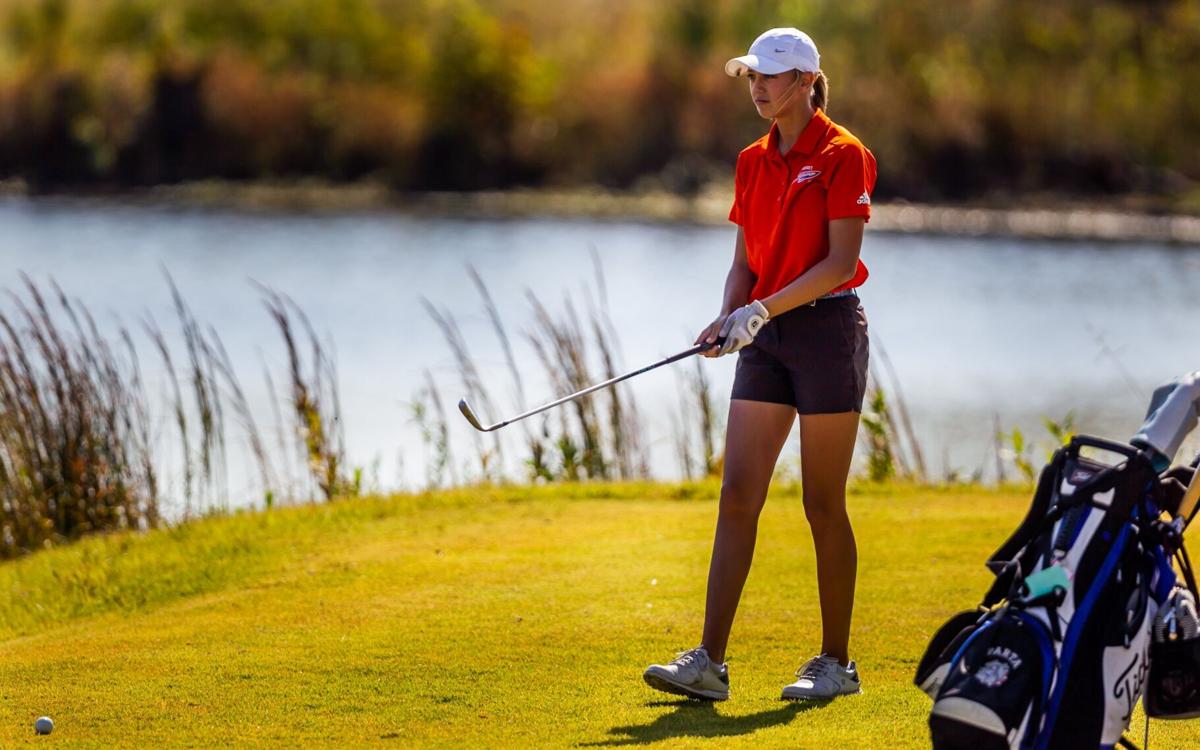 Okawville senior Chloe Kraus steps up to her ball during the Class 1A Waterloo Regional girls golf tournament on Wednesday, Oct. 7, 2020, at Acorns Golf Course in Wartburg, Ill. Gordon Radford | Special to STLhighschoolsports.com 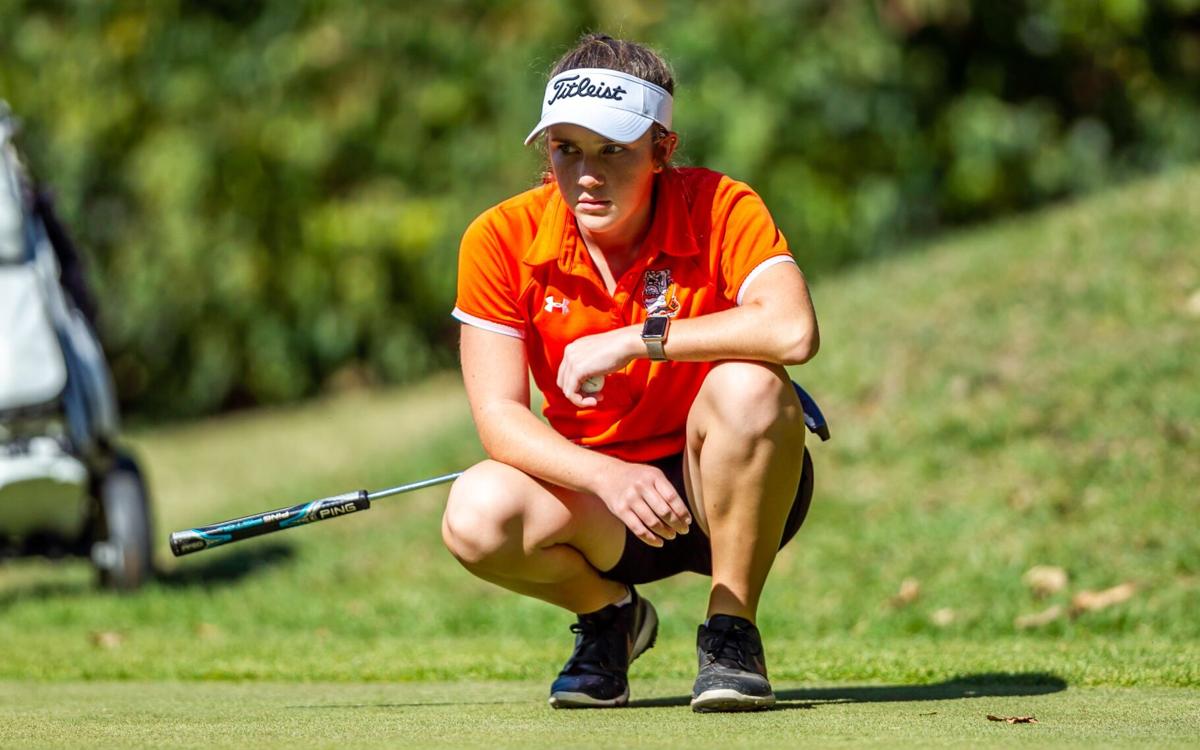 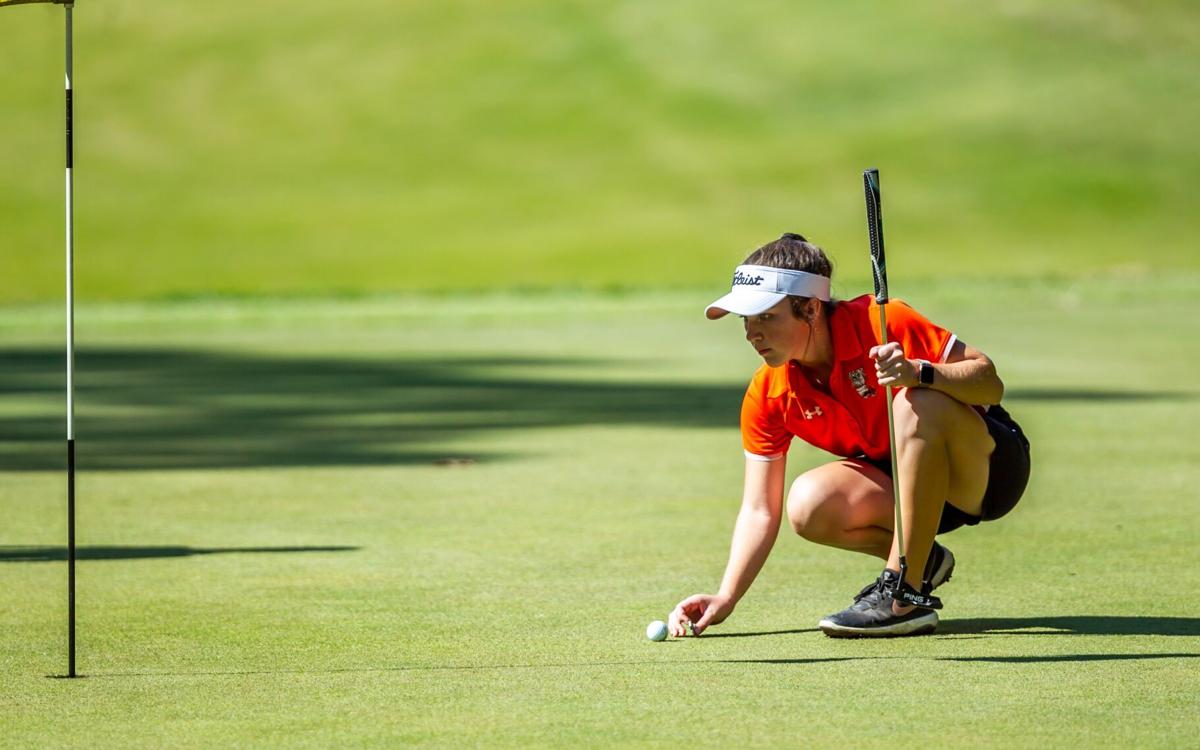 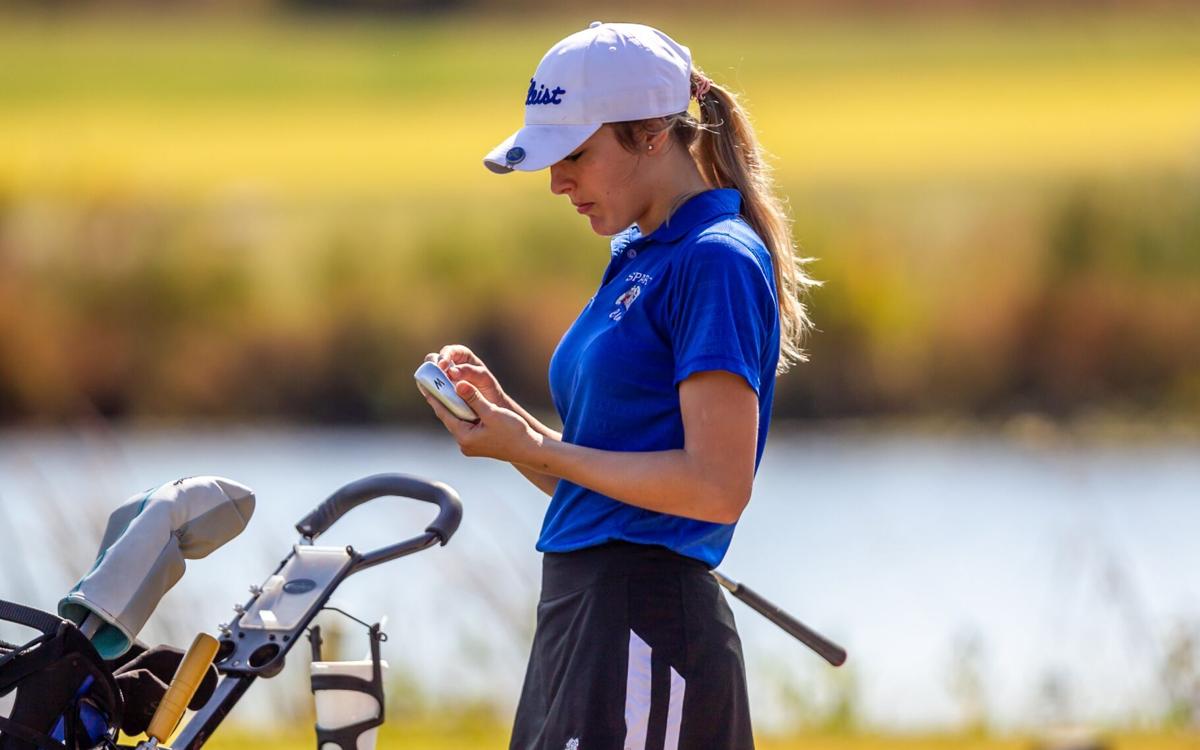 WARTBURG — Columbia High senior Marissa Maldonado was playing the round of her life when disaster struck on the 17th hole — or rather struck a golf cart.

With Columbia leading by one shot with only two groups left on the course, Maldonado’s approach shot drifted right, deflected off a spectator’s golf cart and landed in a hazard, producing one of the few double bogeys on her scorecard.

“I was a little upset because my first thought was, "‘Why is the cart there?’ But I couldn’t let it affect my mood or my mental game,” said Maldonado, who fired a career-best 88.

Maldonado shook off the bad break with a birdie on the 18th hole, a microcosm of the resiliency of the Columbia golf team as the Eagles captured their first regional championship in school history with a team score of 364 at the Class 1A Waterloo Regional at the Acorns Golf Links on Wednesday.

“It’s fantastic. I’m super-proud of them,” Columbia coach Matthew Duguay said. “I liked how, if they hit a bad shot or had a bad hole, it didn’t really affect them. They forgot about it and went to the next shot.”

The top two teams and the top four individuals from non-qualifying teams advanced to the Salem 1A sectional tournament scheduled on Monday.

Waterloo also advanced as a team, placing second with score of 374 edging out Okawville by one stroke (375).

Columbia was led by senior Malia Kossina, who shot a blistering, 4-over-par, 76, one shot short of earning medalist honors. Kossina, whose sister Mikaela was the regional medalist for Columbia in 2018, cruised through the first 16 holes at 2-over-par despite long waits due to backups on tee boxes and the need for official rulings within her own group.

“That was definitely hard. A problem for me is staying focused, so I had to try to keep my mind off things while at the same time being laser-focused,” Kossina said.

Kossina carded her only double bogey on the dreaded 17th hole when her ball found the creek that dissects the fairway. But like Maldonado, she rebounded to play the finishing hole to perfection, earning her eighth par on the back nine.

“I was here to play. It was just me against the course,” Kossina said.

Kossina finished one shot behind Okawville senior Chloe Kraus, who earned medalist honors by shooting a career-best 75. She will make her fourth sectional appearance as an individual.

“I just woke up and said, "It’s my senior year, and I don’t want to put this on for the last time,” Kraus said while clutching her orange Okawville polo shirt. “I just wanted to see if I could shoot my lowest and get the team (to sectionals).”

And it all came down to the last group on the last hole.

Looking at the IHSA golf app that recorded scores in real time, Waterloo sophomore Calli Smith deduced that she needed to make bogey or better as she approached the 18th tee to send the Bulldogs to sectionals.

“I was just trying to take it one shot at a time instead of thinking about an ending (number) of what I needed to get on the hole,” said Smith, who centered her drive in the fairway, lagged a par putt within inches and tapped in for bogey to finish with a team-best 88 and give Waterloo another week of competition.

“It was a nail-biter, but when (Smith) knocked her first putt within six inches, we could breathe a little bit,” Waterloo coach Jacob Flick said. “It was a grind. Some of them didn’t have their best stuff today, but on the back nine they settled down a little bit and I think that’s what helped us move on.”

Joining Smith and Kossina in the final group was Quigley, who was the lone representative for Marissa. She battled through trouble all day, including on the 13th hole when her ball twice ended up in odd predicaments that caused rules officials to intervene, but she persevered to finish with an 88 and advance to sectionals.

“I’m definitely relieved. It mentally was really challenging with the ups and downs, but I tried to stay positive throughout the whole day,” Quigley said. “Staying positive wins a lot of things for you.”

Okawville senior Chloe Kraus steps up to her ball during the Class 1A Waterloo Regional girls golf tournament on Wednesday, Oct. 7, 2020, at Acorns Golf Course in Wartburg, Ill. Gordon Radford | Special to STLhighschoolsports.com