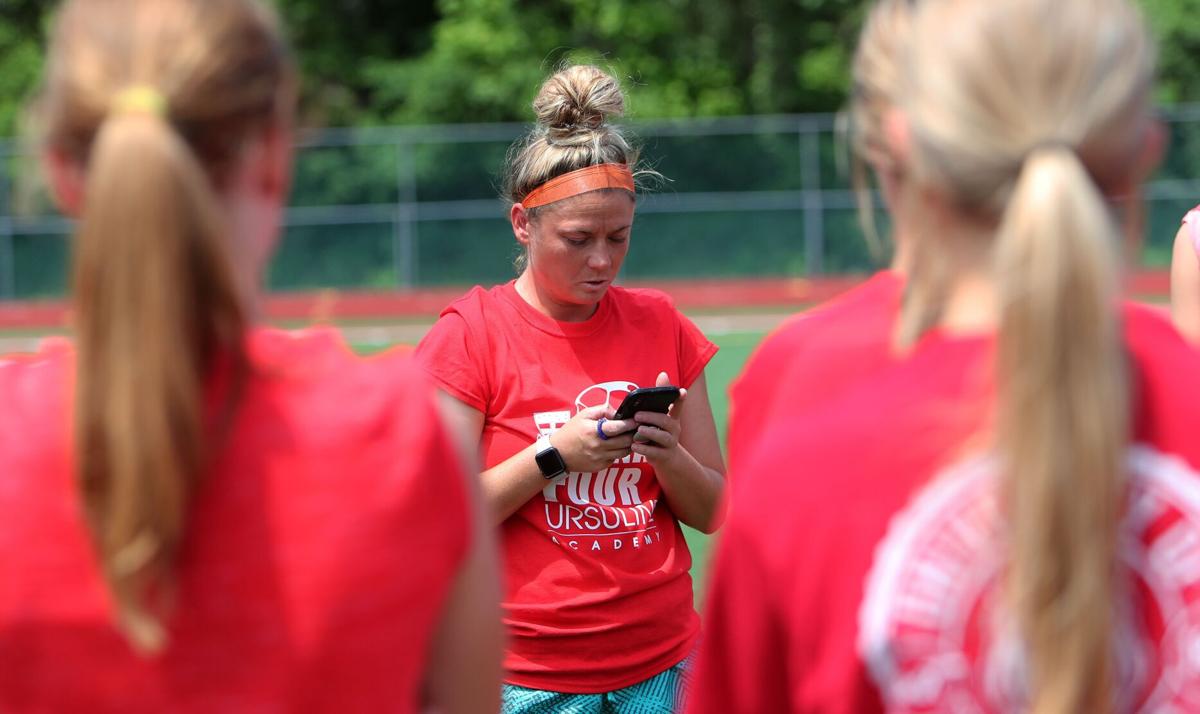 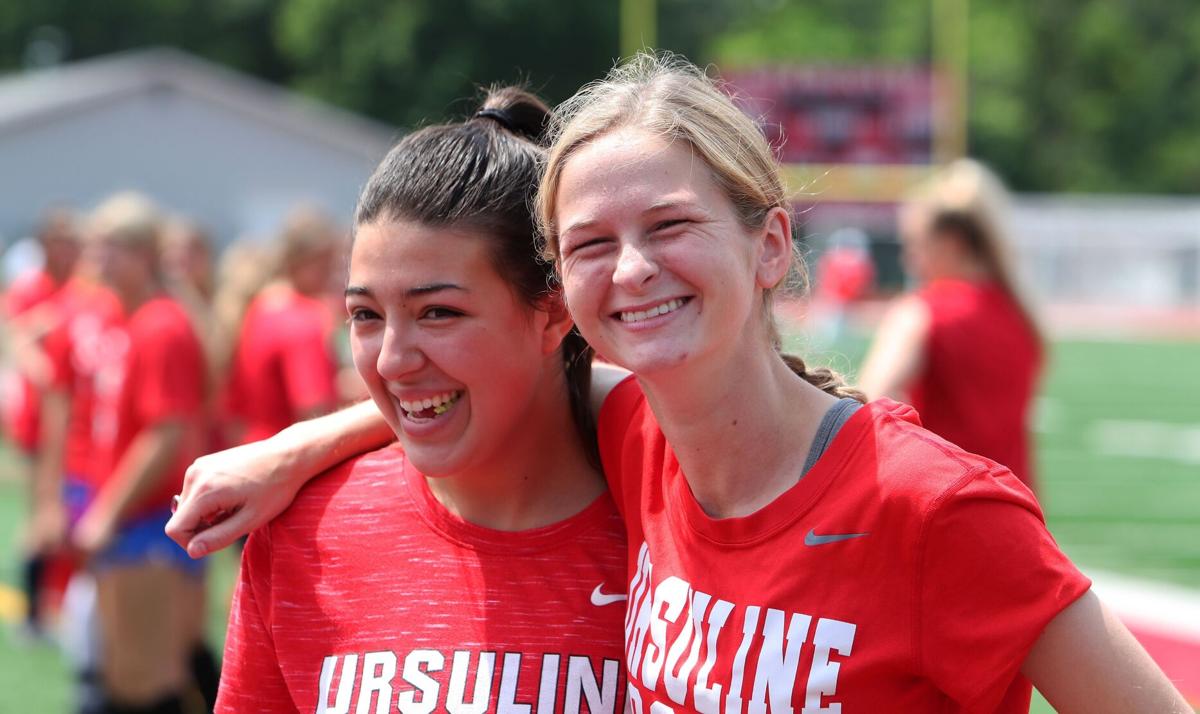 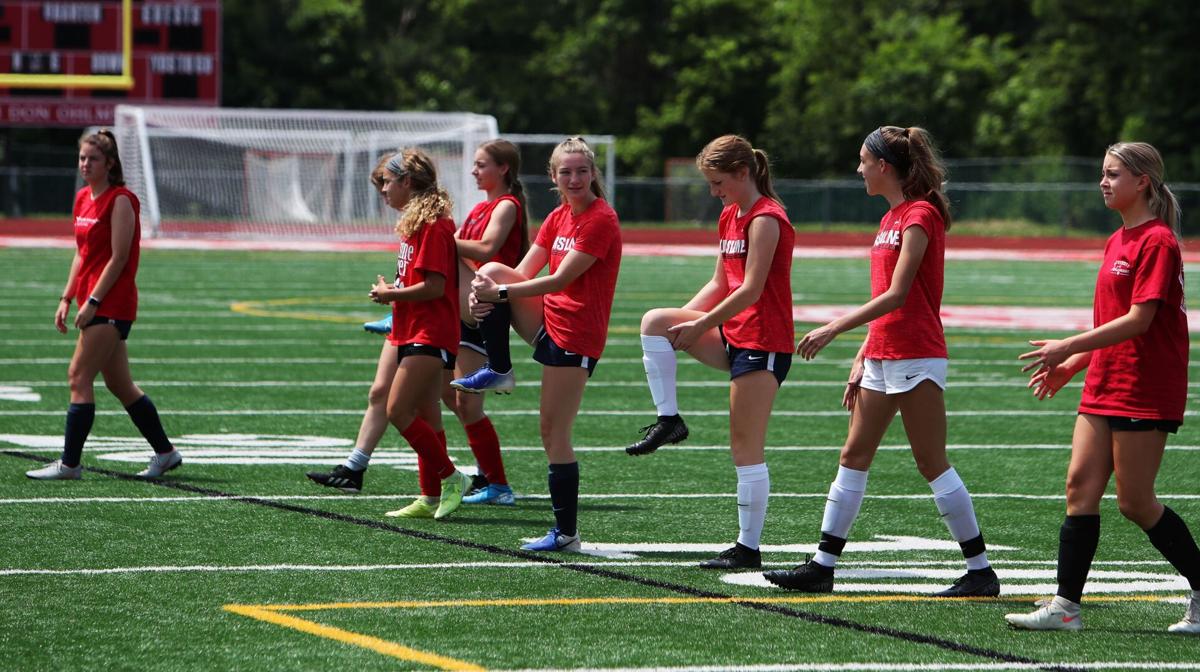 The Ursuline soccer team goes through morning stretching before practice at Chaminade on Thursday, June 3, 2021. Paul Baillargeon, Special to STLhighschoolsports.com 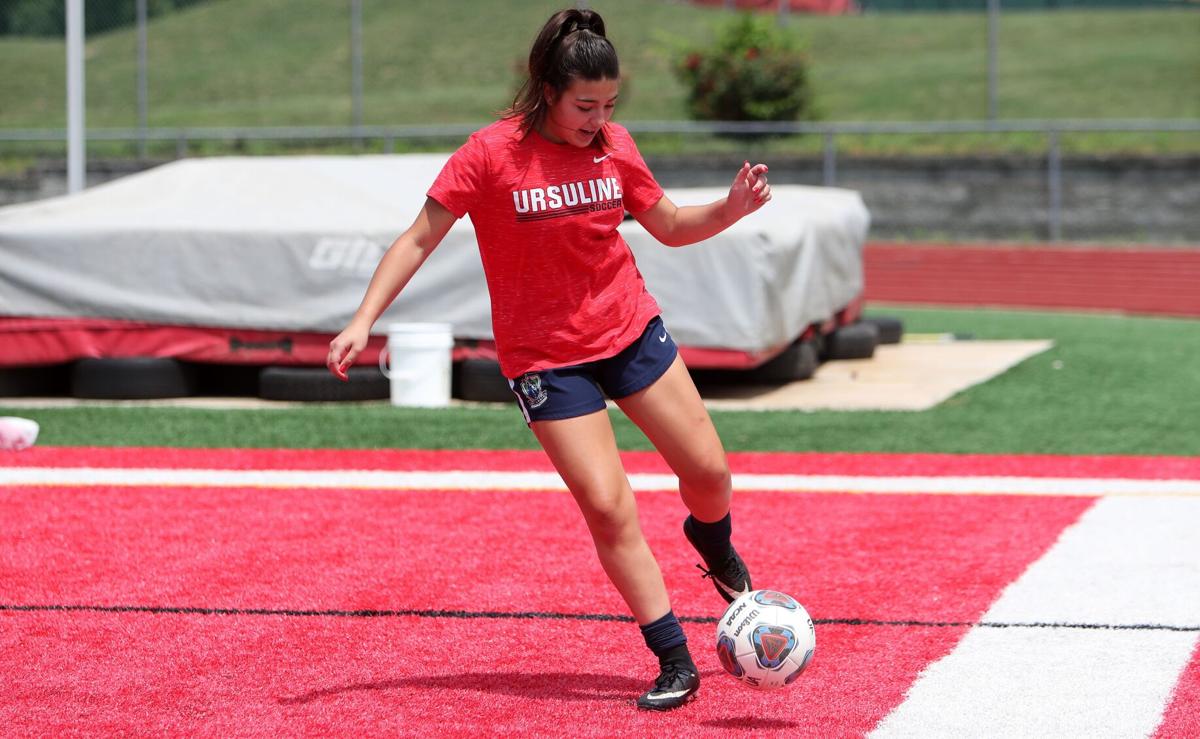 Lia DiPiazza of Ursuline Academy settles the ball during practice at Chaminade on Thursday, June 3, 2021. Paul Baillargeon, Special to STLhighschoolsports.com 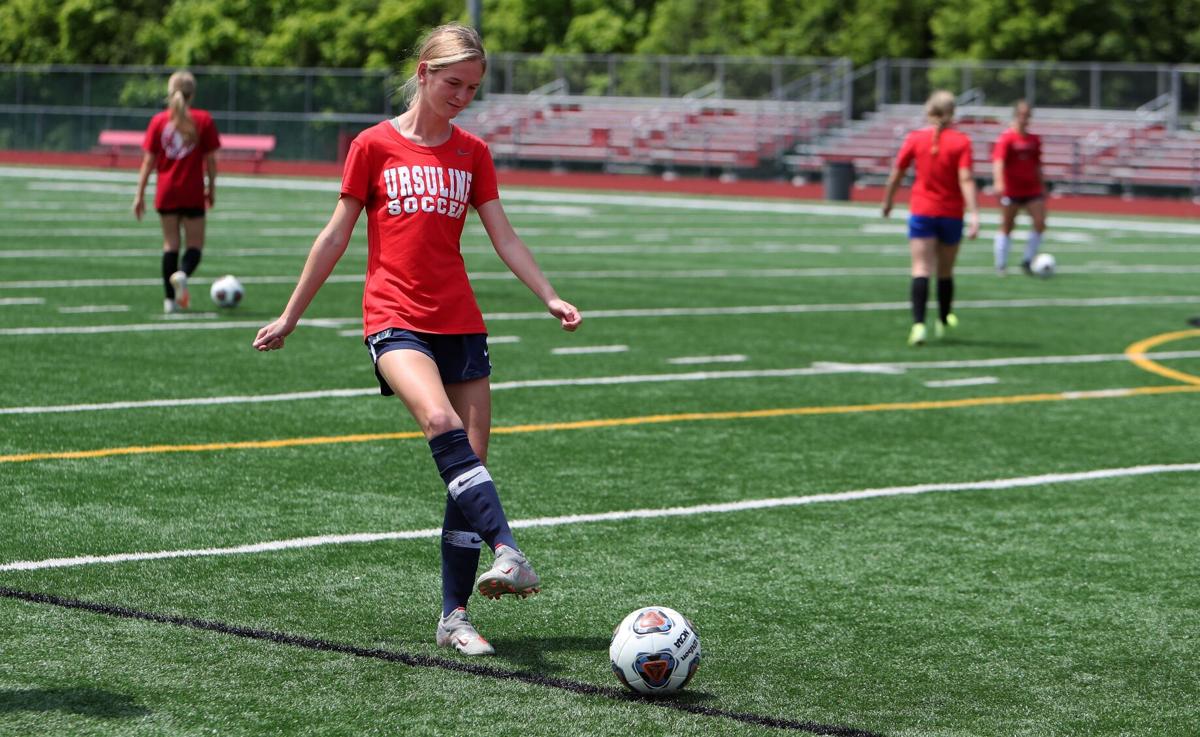 Kiera Dunne of Ursuline Academy goes through drills during practice at Chaminade on Thursday, June 3, 2021. Paul Baillargeon, Special to STLhighschoolsports.com

The joy that coursed through Kierra Dunne might as well have been novocaine.

She couldn’t feel any pain.

A senior center midfielder for the Ursuline soccer team, Dunne had every right to collapse from exhaustion. The Bears had just survived a double overtime thriller with a 1-0 victory over MICDS to win a Class 2 district championship on May 20.

Dunne’s legs ached. Her lungs burned. Her nose was stuffed with gauze to soak up blood from a bump earlier in the match.

None of that mattered when junior winger Maddie Schneiderhahn’s free kick from just inside midfield found the back of the net and gave the Bears their first district title in a decade.

The Ursuline players rushed each other to celebrate. Then their fans joined the dogpile, too.

“We were all in a big hug,” Dunne said. “It’s one of the greatest feelings I’ve ever felt in my entire life.”

It took a bit, but Dunne realized that not only did Ursuline keep its season alive but it added a new piece of hardware to the trophy collection. She went to collect the district championship plaque and proceeded to pose with it for a litany of pictures.

It wasn’t until later when she and her teammates crowded around one another for a group photo that someone asked if she was going to ditch the gauze that was poking out of her nose.

Dunne completely forgot about it.

“It’s there in every single picture I’m holding the plaque,” Dunne said with a laugh.

The plaque might be the newest addition to the trophy collection, but it won’t be the last this season. Ursuline (11-6-1) will make its third girls soccer state semifinal appearance when it faces Pleasant Hill (14-8) at 12:30 p.m. Friday at Soccer Park. The winner will advance to the Class 2 championship game at 12:30 p.m. Saturday at Soccer Park.

That the Bears have put themselves in a position to compete for a state championship is completely unexpected. Ursuline went 4-14-3 in 2019, which was a bit better than its 2-13-2 record in 2018. There was no season in 2020 due to the coronavirus pandemic.

When preseason practices began in March, the Bears were dealing with a roster that was long on youth and short on experience. Because of the lost spring of 2020, the sophomores had played as many varsity games as the freshmen. It was a new team that, more than ever, needed its seniors to step into leadership positions.

Dunne and fellow center midfielder Lia DiPiazza, both 18, have filled that role and then some.

Dunne and DiPiazza were the only freshmen on the varsity in 2018. They remember vividly how it felt.

“It’s scary,” said Ursuline coach Theresa Kaiser, a 2007 graduate who was one of a handful of freshmen on the varsity in 2004.

Dunne and DiPiazza made a concerted effort at the first practice to make everyone feel welcomed and comfortable. They made sure to try to learn everyone’s name. They invited teammates they hadn’t interacted with much during the school year to join their small practice groups.

“Our team meshed on the first day of practice,” DiPiazza said. “We clicked right away. I knew something special was going to happen.”

After some initial anxiety before the season opener at Westminster, which Ursuline won 5-0, the underclassmen proved themselves ready for the challenge.

“I drove some of them to the (Westminster) game,” DiPiazza said. “They’d never played a high school soccer game. They were all so nervous.”

The nerves melted and the talent came out. Freshman striker MaryClaire Imig leads the Bears with 10 goals. Freshman Bella Daus is a stellar defender whose man-marking abilities have been critical as Ursuline has posted consecutive shutouts during the playoffs.

“When they’re on the field you wouldn’t know they’re freshmen,” Kaiser said. “They just do their jobs with their heads held high.”

DiPiazza and Dunne shifted their roles on the field this season to maximize everyone’s talents. The 5-foot-4 DiPiazza has relished her time as a center mid this spring as she’s scored four goals and served up four assists.

“I like that distribution position,” DiPiazza said. “When (Imig) scores, I feel her excitement.”

After leading the team with six goals and four assists as a sophomore, the 5-foot-7 Dunne moved to a defensive midfield position this spring, where she’s contributed three goals, two assists and couldn’t be happier.

“I like assists, they’re good,” Dunne said. “Like my dad says, ‘You’re scoring off someone else’s foot.’ ”

After being part of six combined wins during their freshmen and sophomore seasons, DiPiazza and Dunne were instrumental as Ursuline won seven of its first nine games. But then the Bears hit their roughest stretch of the season. They were winless in five matches and lost four of them — the last a week before the postseason began.

Kaiser focused her team on its process. Every match was an opportunity to learn something and get better. During the winless streak it became apparent the Bears needed to improve their man marking. One of the reasons they weren’t having success was simply because they lost their marks.

So Kaiser and her coaching staff had the team drill it time and again.

It appears to have done the trick as the Bears have allowed just the one goal to Affton in three postseason matches.

Kaiser also wanted to drill home just how much support the team will have when it takes the field Friday afternoon. After each practice this week Kaiser read messages from Ursuline alums. The players were blown away.

“We’re not alone in this,” DiPiazza said. “It’s a great way to end practice. I feel like a professional soccer player with the amount of love and support we’re getting.”

It has inspired the Bears and their two senior leaders. Neither DiPiazza nor Dunne have any plans to play collegiately. DiPiazza will attend Marquette University and Dunne is headed to St. Louis U. This is their last hurrah and they’re going to leave everything they’ve got on the Soccer Park turf.

They have no doubt the underclassmen will, too.

“We’re all there for each other,” DiPiazza said. “We want this for one another.”

The Ursuline soccer team goes through morning stretching before practice at Chaminade on Thursday, June 3, 2021. Paul Baillargeon, Special to STLhighschoolsports.com

Lia DiPiazza of Ursuline Academy settles the ball during practice at Chaminade on Thursday, June 3, 2021. Paul Baillargeon, Special to STLhighschoolsports.com

Kiera Dunne of Ursuline Academy goes through drills during practice at Chaminade on Thursday, June 3, 2021. Paul Baillargeon, Special to STLhighschoolsports.com