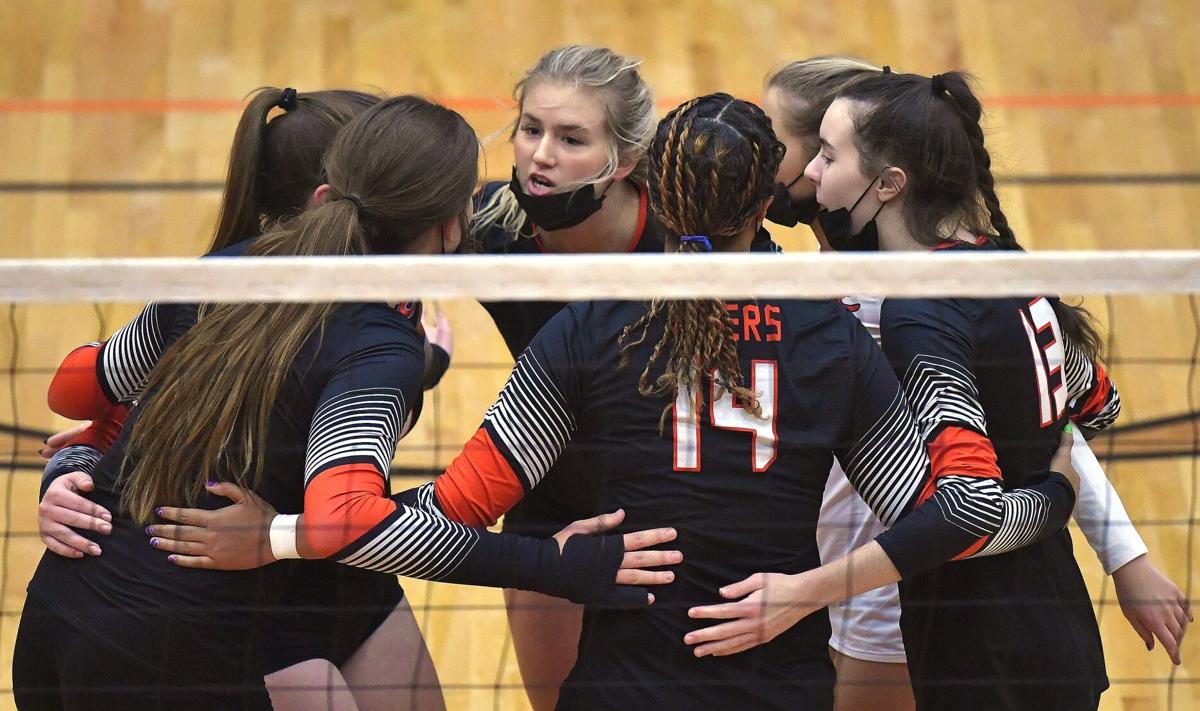 Edwardsville players huddle after O'Fallon scored on them early in the match. Edwardsville defeated OFallon in a semifinal volleyball game of the Pekin Sectional on Monday November 1, 2021 at Edwardsville High School in Edwardsville, IL. Tim Vizer/Special to STLhighschoolsports.com 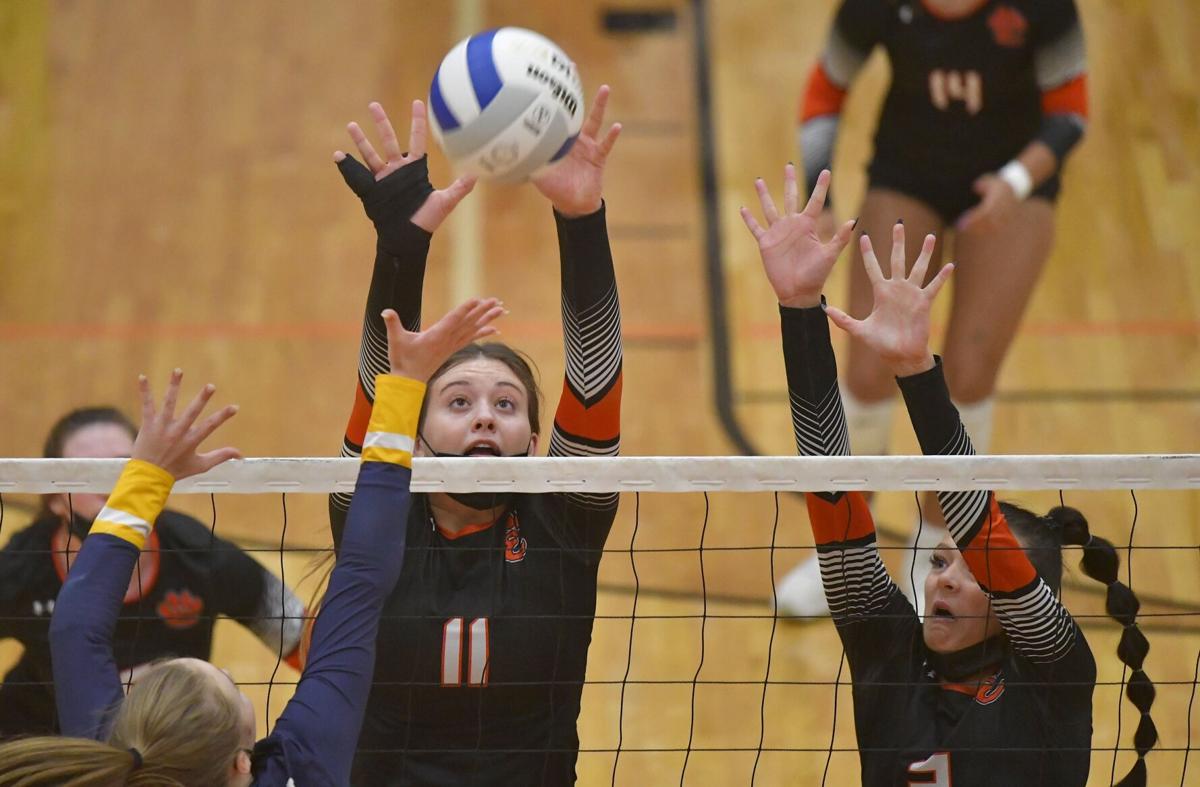 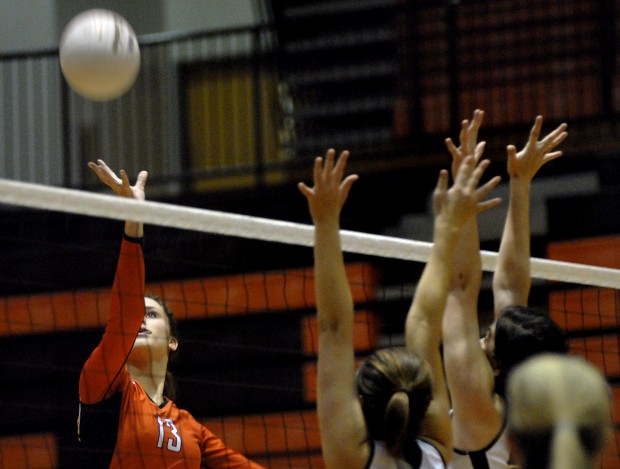 Senior Gabby Saye had a special guest as she and her Edwardsville High girls volleyball teammates took the floor against Huntley last Friday.

Saye’s sister, Camrey, was able to attend. Camrey doesn’t get to many of Gabby’s matches because of her schedule as a nurse, but the Class 4A super-sectional with a trip to state on the line was a big one.

“I think it for her it was definitely like an emotional experience to kind of like relive that moment and she was just really excited for us,” Gabby said.

Gabby Saye is the youngest of three Saye sisters to wear the Edwardsville orange and black on a volleyball court. Camrey was the first.

The siblings were born with volleyball in their blood. Their mother played in college and their parents served as their coaches as they developed.

And after Edwardsville’s 25-12, 25-21 sweep of Huntley, the siblings have one other thing in common as Camrey was a freshman on the 2010 Tigers team, the only other Edwardsville volleyball squad to advance to the state tournament.

Edwardsville (33-7) will take on Chicago McAuley in the Class 4A semifinals at Redbird Arena on the campus of Illinois State University at 7 p.m. Friday. McAuley has won 15 state championships, though its last title and state tournament appearance was in 2016.

Big sister had some advice after the win.

“She just told me to just really enjoy it and just play hard,” Gabby Saye said. “Really just take it all in and have fun.”

This group of Tigers has had plenty of fun this season.

“We're in a unique situation where at any given time on the front row we have three attackers that can put a ball away, which you don't usually see,” Edwardsville coach Heather Ohlau said.

Ohlau said the Tigers took advantage of an eight-match spring season played in April because of COVID-19 pandemic.

Aside from hosting its annual tournament that features area powers from both sides of the river, Edwardsville played twice in the Chicago area.

The second trip was to Plainfield Central and resulted in a third-place finish for Edwardsville.

“We saw that if we can put up a solid block and we can keep balls off the floor, we can hang with these teams up north,” Conway said. “That game was a big turning point for us as a team to just show us that we can do it, we can go far.”

That belief and confidence will be crucial against Mother McAuley.

“They've got some pretty good hitters,” Ohlau said. “We have some footage on them that the girls watch, but the other thing I do know is that they're beatable. They've lost six matches, so it's not outside the realm of possibilities, but it's going to come down to our girls playing a fairly clean game and just taking control of every opportunity.”

The Tigers are at their best when they are enjoying themselves. That includes singing songs together during warmups and picking each other up through the highs and lows of a match.

The Chargers claimed their fifth girls volleyball state championship but first since 2002. They hadn't been past the quarterfinal since 2007.

WILDWOOD — Madilyn Sell was just a year old. Her teammates were either still in diapers or not even born.

Winning girls volleyball titles in Missouri is a family affair in Hermann.

The Chargers made the most of their first state semifinal match since 2007 with an impressive sweep.

Waterloo returns to 3A sectional title match by knocking off Mattoon

BETHALTO — Josie Briggs went up for a block before coming down hard on her left ankle.

Conway lifts Edwardsville past O'Fallon and into 4A sectional final

EDWARDSVILLE — Kaitlyn Conway long ago realized the life of a libero is lonely.

Edwardsville players huddle after O'Fallon scored on them early in the match. Edwardsville defeated OFallon in a semifinal volleyball game of the Pekin Sectional on Monday November 1, 2021 at Edwardsville High School in Edwardsville, IL. Tim Vizer/Special to STLhighschoolsports.com