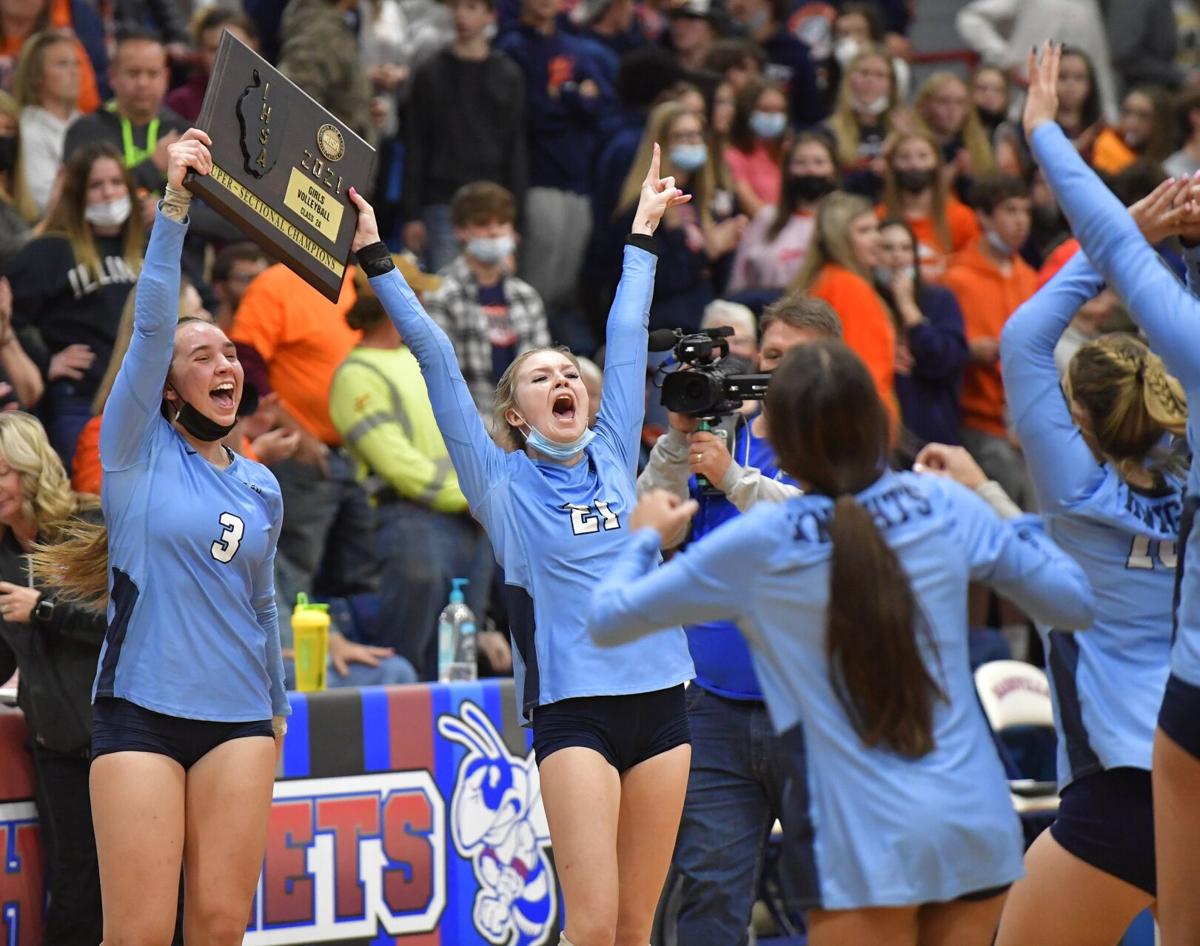 Mater Dei players Tori Mohesky (left) and Riley Kleber hold up the plaque they won after defeating Carterville in the Class 2A volleyball Super-Sectional on Friday November 5, 2021 at Nashville High School in Nashville, IL. Tim Vizer/Special to STLhighschoolsports.com 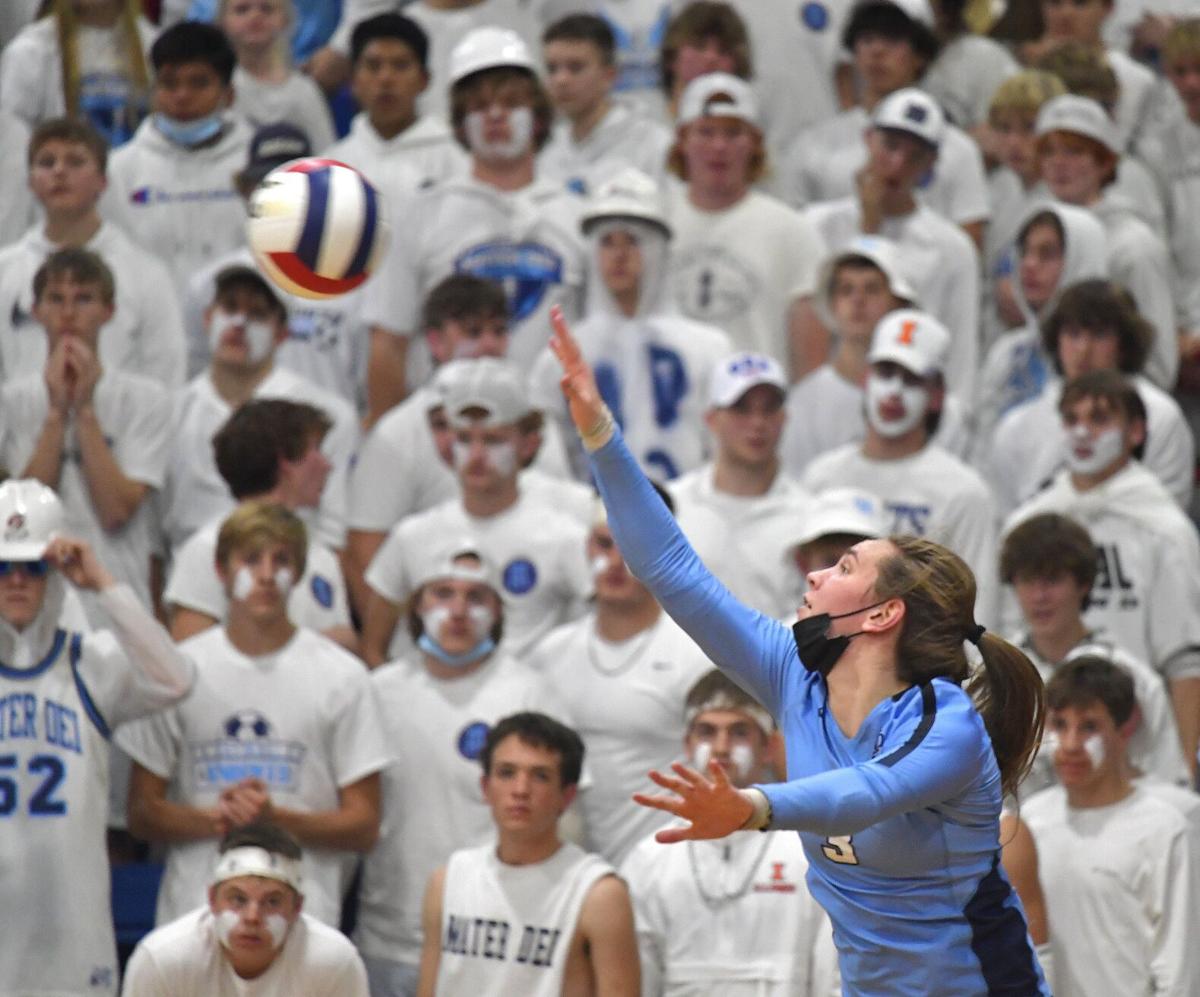 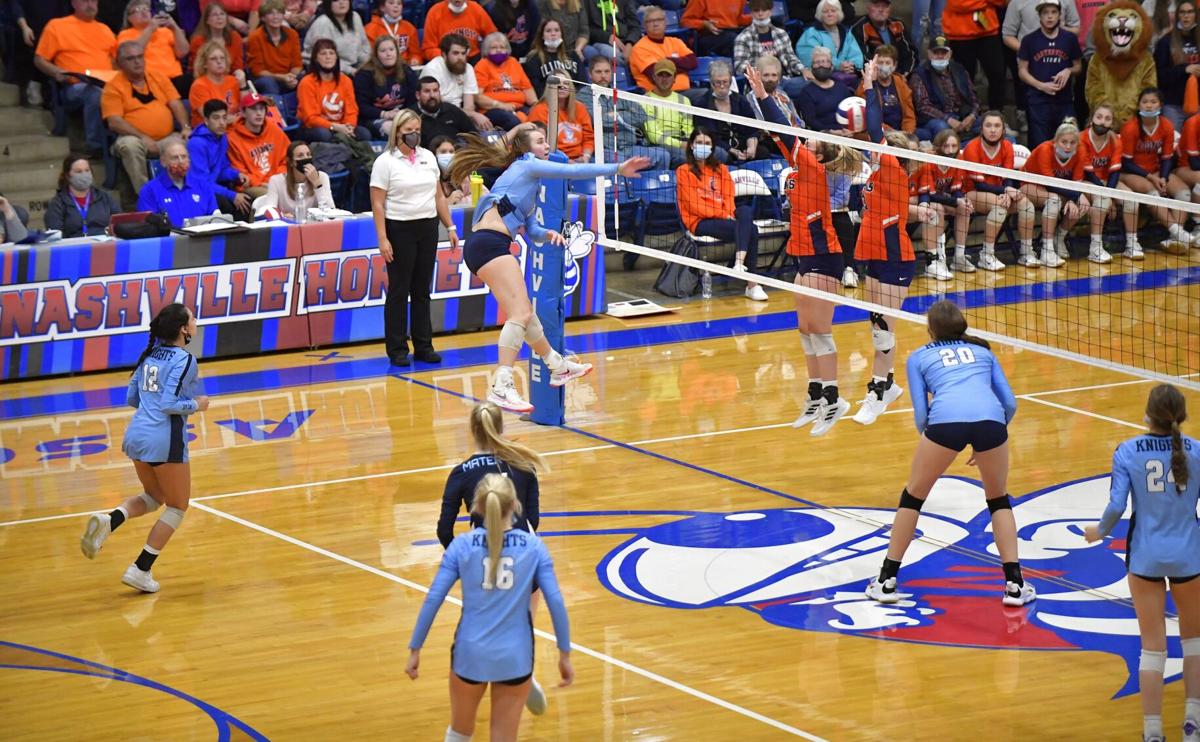 Mater Dei player Tori Mohesky slams the ball over in the final minutes of the game. Mater Dei defeated Carterville in the Class 2A volleyball Super-Sectional on Friday November 5, 2021 at Nashville High School in Nashville, IL. Tim Vizer/Special to STLhighschoolsports.com

BREESE — Tori Mohesky picked up the bug during a club volleyball tournament three years ago in Nashville, Tennessee.

While sightseeing along Music Row, the Mater Dei senior decided she wanted to learn how to play the guitar.

So when Mohesky returned home, she immediately went to work.

“First, I learned how to tune it,” she recalled. “Then, I just taught myself how to play.”

Through internet instruction and an uncanny ability to master new things, Mohesky became quite proficient in a short amount of time.

These days, she can pick and sing a variety of songs, including her favorite, “Head Over Boots,” a country dance hall anthem by Jon Pardi.

“My grandma loves that one,” Mohesky said.

The self-motivated outside hitter adores challenges, both on and off the volleyball court.

And she has tackled more than few.

The career leader in kills at the Breese-based school, Mohesky also can play the piano, although she admits to taking lessons to reach a certain level of efficiency.

Explained senior hitter Riley Kleber, “She’s just all-around talented in everything. It’s crazy, but there aren’t too many things she can’t do.

Driving a volleyball to the court with deadly force tops the list.

The 5-foot-11 jumping jack has helped the Knights reach the state tournament for the 24th time in its storied history.

Mater Dei (34-5) will be searching for its eighth state championship and first since 2011 when it faces Montini (38-1) in a semifinal match at noon Friday at Redbird Arena in Normal. Pleasant Plains (33-5) and Chicago Christian (34-6) meet in the other 2A semifinal at 1:55 p.m.

The winners are scheduled to face off for the state title at 1:55 p.m. Saturday.

Most impressively, Mohesky set the mark in just more than three seasons since the Knights played just 11 matches during the spring of 2021 due to COVID-19 restraints.

Taking over the all-time hitting spot at a school with one of the most storied volleyball histories in the state is not lost on Mohesky.

Mohesky drew the attention of Rakers while she was competing on the sixth grade team at All Saints Academy.

“They had just won the first (set) of a match and the girls were happy as clams running from one side of the court to the other and Tori gets them together and says, 'All right girls, let’s do it again,' ” Rakers recalled. “From that moment, I knew that she loved (winning), she loved the sport. She gets it.”

Mohesky and four of her current Mater Dei teammates went on to win the state championship in eighth grade. That group, which includes Kleber, has been dominating area volleyball circles for the last six-plus years.

“Tori and I have been best friends since the fourth grade,” Kleber said. “She still impresses me with some of the things she can do out there.”

Mohesky broke into the starting lineup as a freshman and recorded 203 kills to help the Knights to a 25-13 mark. They lost to Althoff in a 3A sectional final.

The next season, Mater Dei finished second in the state, dropping a decision to Decatur St. Teresa in the Class 2A final. Mohesky recorded 22 kills over the two state matches, including 14 in a semifinal win over St. Joseph Ogden.

A straight-A student, Mohesky has kicked her game into an even higher gear this time around with 25 matches of 10-plus kills, including a career-best 24 in a thrilling five-set win Sept. 25 at Borgia.

“Her power is what does it for her, she’s so strong,” said Mater Dei senior Annalyse Richter, who has been setting Mohesky since sixth grade. “Watching her all these years, it’s been insane.”

Mohesky, who will continue her volleyball career at Eastern Illinois University, is a terror on the court, but possesses a laid-back demeanor off of it. She is one of the more outgoing players on a vibrant team. Yet she is just as happy in her own basement where she regularly wiles away the hours working on jigsaw puzzles in addition to honing her musical talents.

“She’s just comfortable being by herself,” said her father, Glenn, a Mater Dei graduate. “Being isolated doesn’t bother her. She always has something to keep herself busy.”

Mohesky picked up volleyball while following around her older sister, Carter, who also played at Mater Dei.

Tori played other sports, including softball and basketball, before deciding to focus on just volleyball during that magical eighth grade season.

The Knights, who are 101-28 in Mohesky’s tenure, have won nine of their last 10 matches and head to the final four with plenty of momentum on their side. Mohesky said the second-place experience of two seasons ago will help this time around.

“We know what to expect, playing in a big building, and things like that,” she said.

“We’re playing well, but we have a few more levels that we can still get to,” Mohesky said. “We’ll have to if we want to come back with that championship.”

The Chargers claimed their fifth girls volleyball state championship but first since 2002. They hadn't been past the quarterfinal since 2007.

WILDWOOD — Madilyn Sell was just a year old. Her teammates were either still in diapers or not even born.

Winning girls volleyball titles in Missouri is a family affair in Hermann.

The Chargers made the most of their first state semifinal match since 2007 with an impressive sweep.

The Tigers are in the Illinois girls volleyball state semifinals for the first time since 2010.

Waterloo returns to 3A sectional title match by knocking off Mattoon

BETHALTO — Josie Briggs went up for a block before coming down hard on her left ankle.

Conway lifts Edwardsville past O'Fallon and into 4A sectional final

EDWARDSVILLE — Kaitlyn Conway long ago realized the life of a libero is lonely.

Mater Dei players Tori Mohesky (left) and Riley Kleber hold up the plaque they won after defeating Carterville in the Class 2A volleyball Super-Sectional on Friday November 5, 2021 at Nashville High School in Nashville, IL. Tim Vizer/Special to STLhighschoolsports.com

Mater Dei player Tori Mohesky slams the ball over in the final minutes of the game. Mater Dei defeated Carterville in the Class 2A volleyball Super-Sectional on Friday November 5, 2021 at Nashville High School in Nashville, IL. Tim Vizer/Special to STLhighschoolsports.com