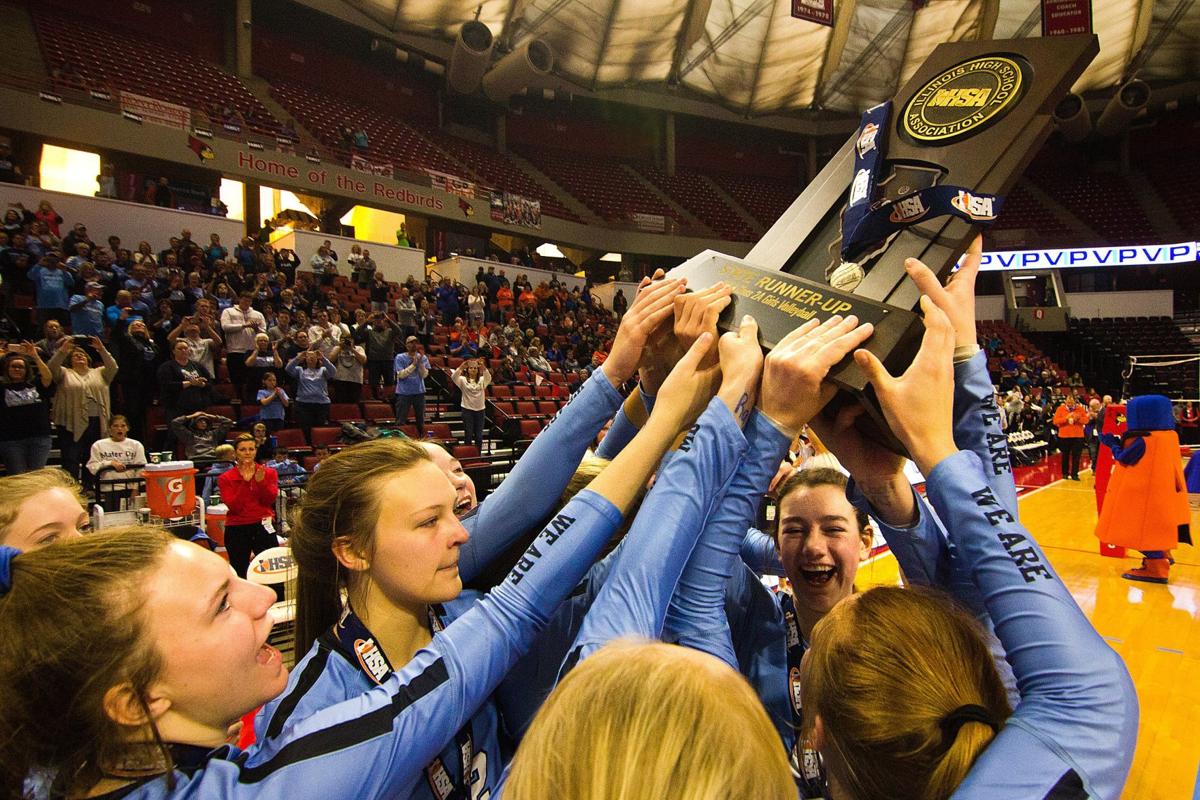 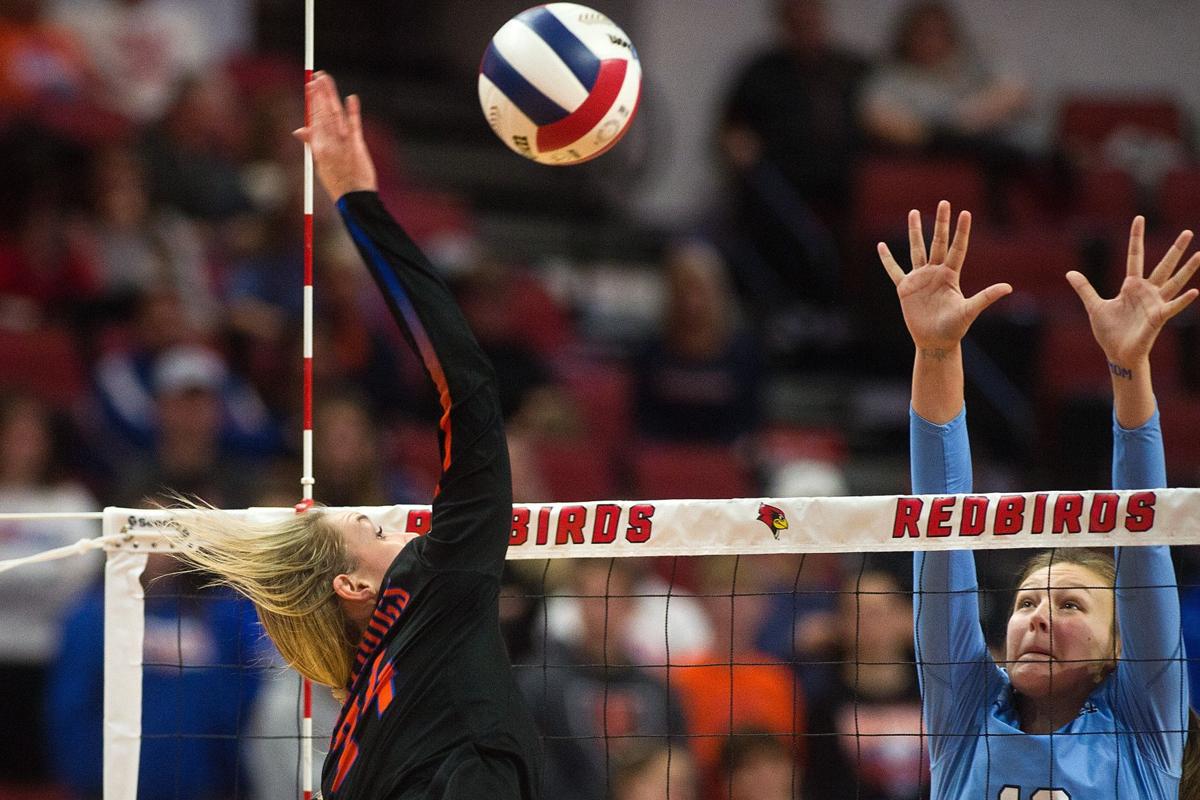 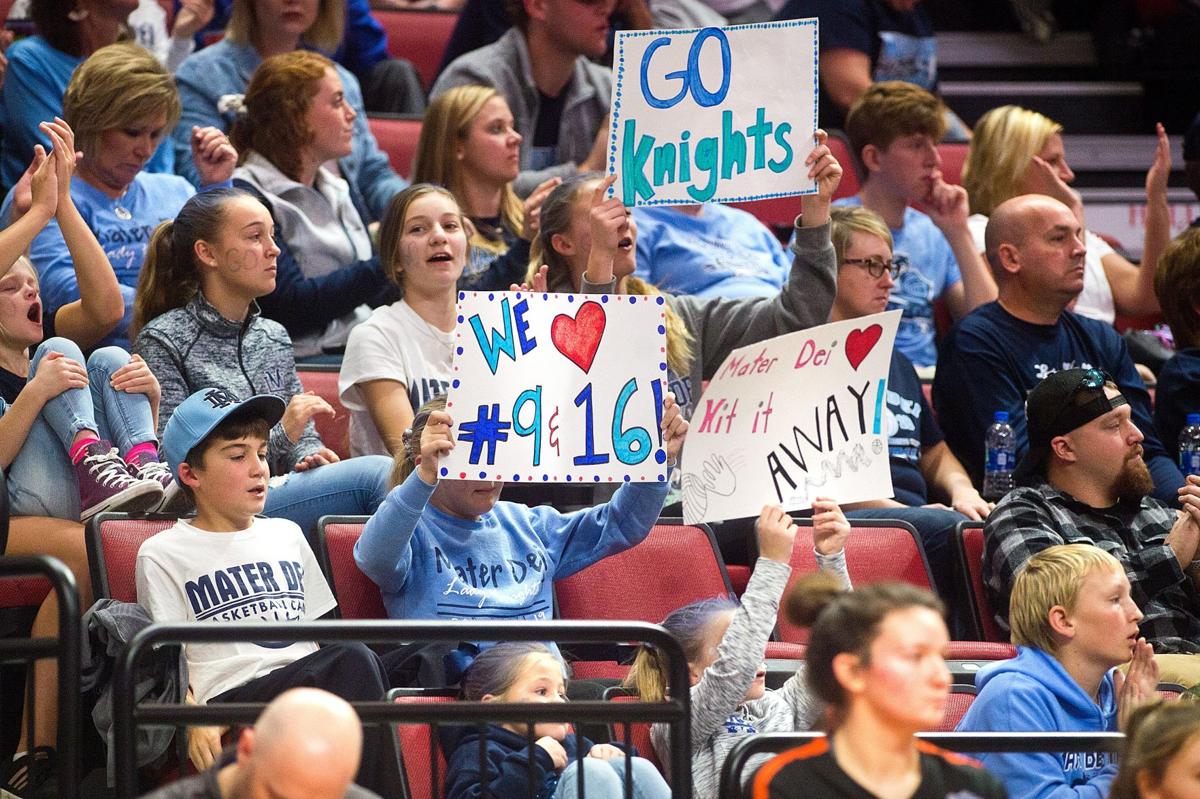 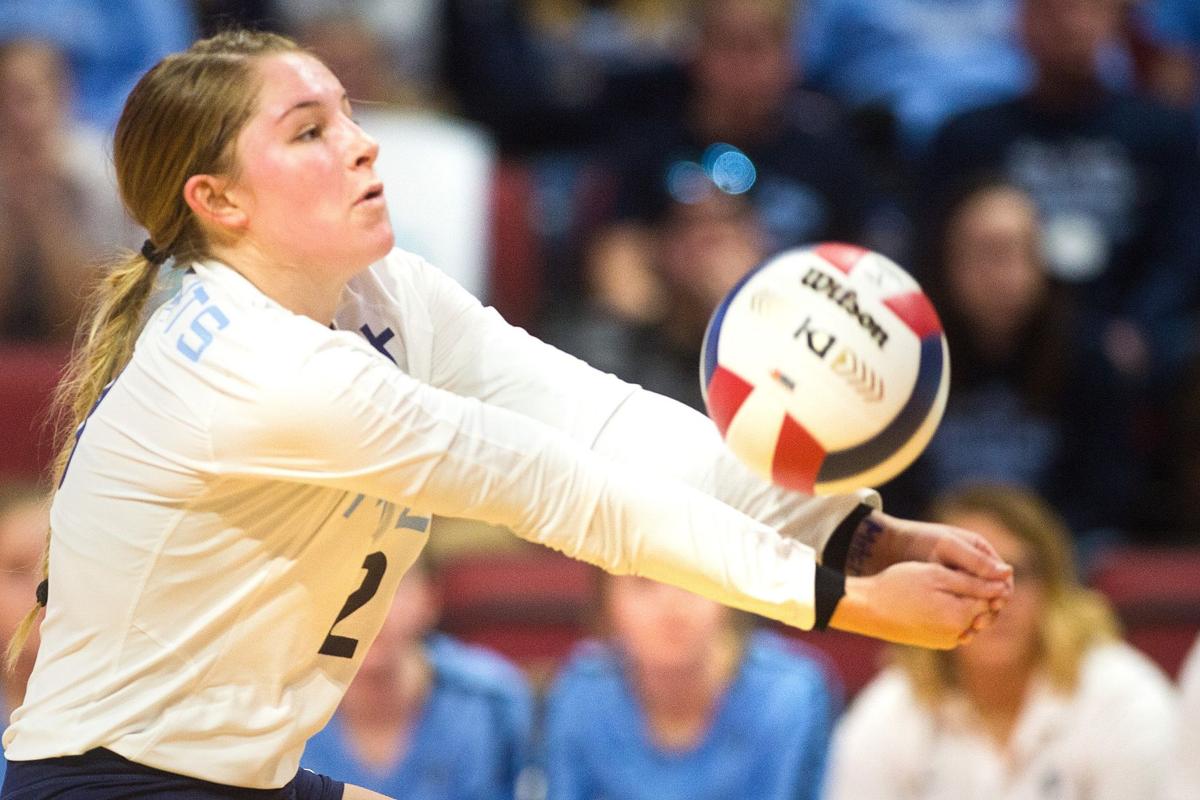 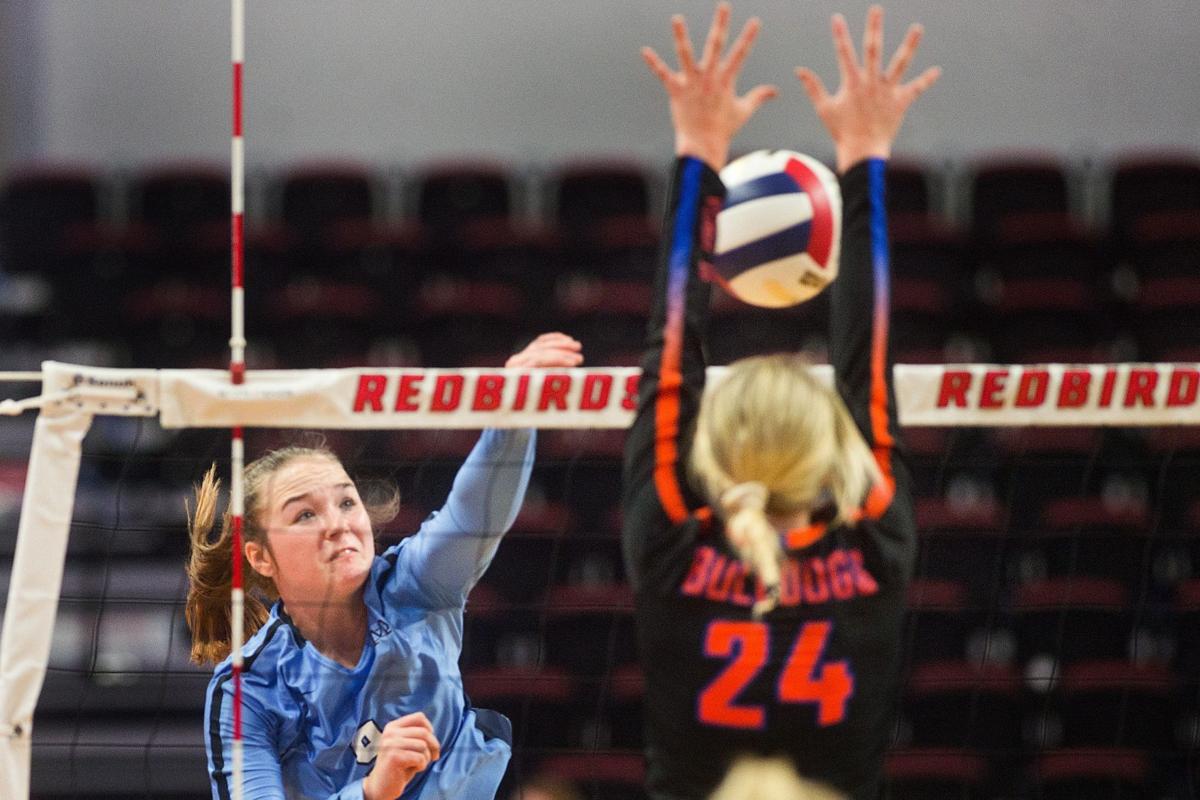 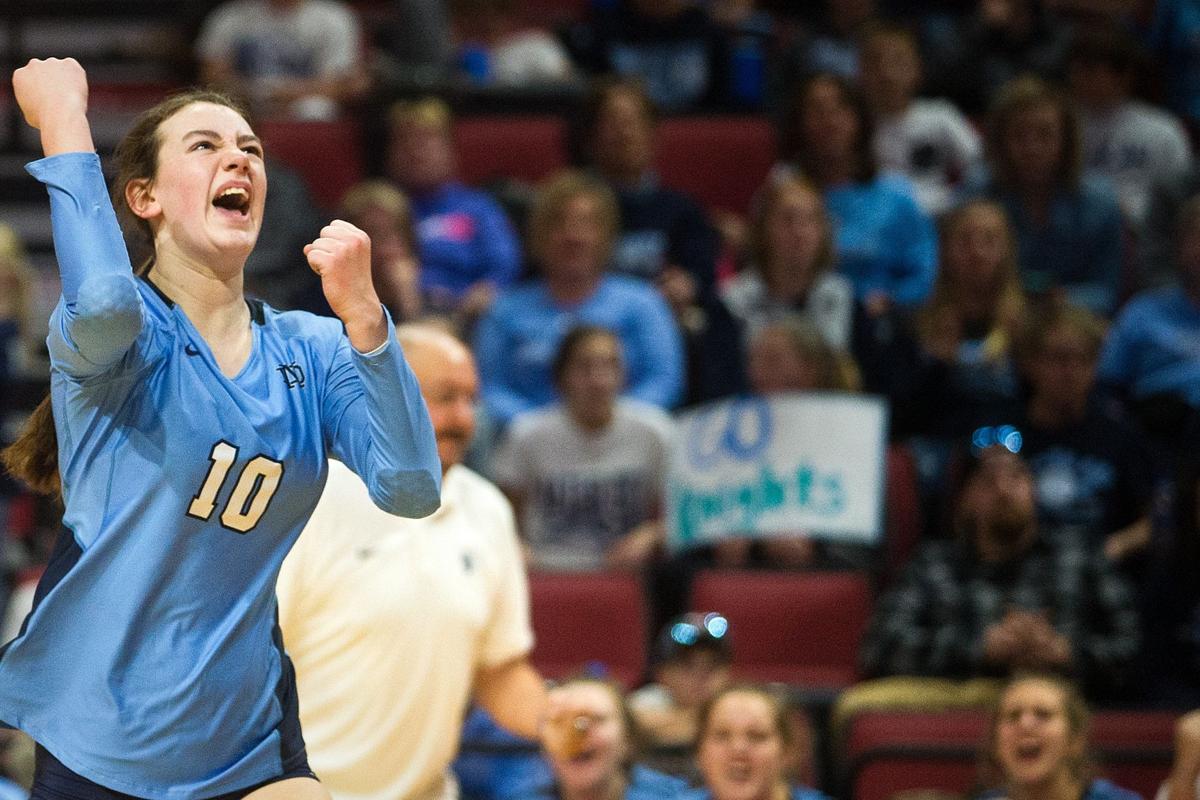 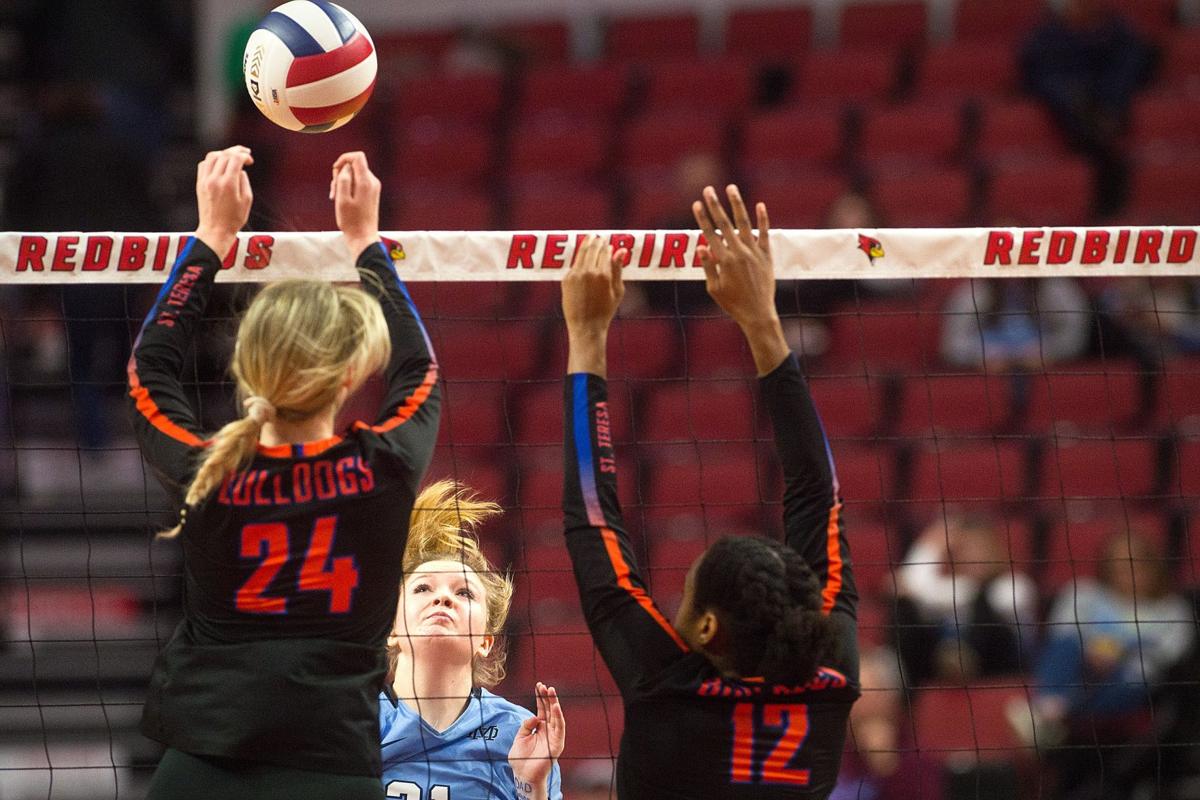 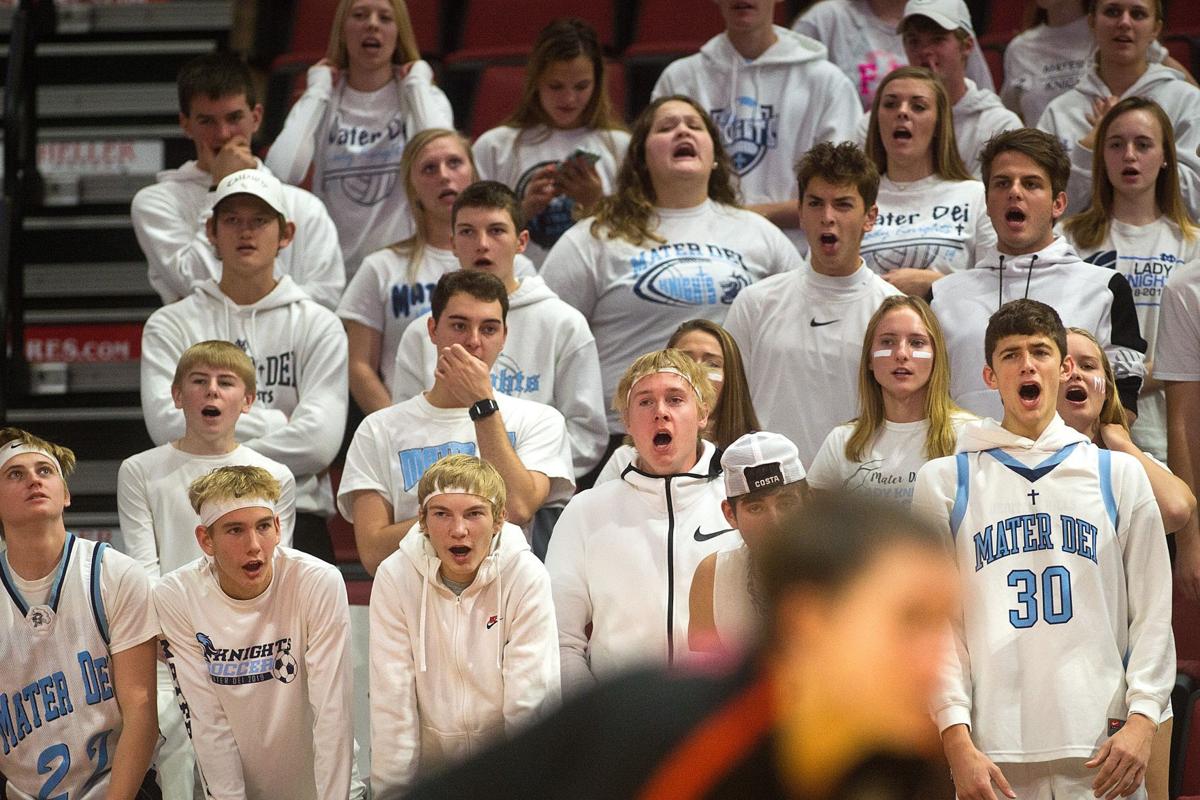 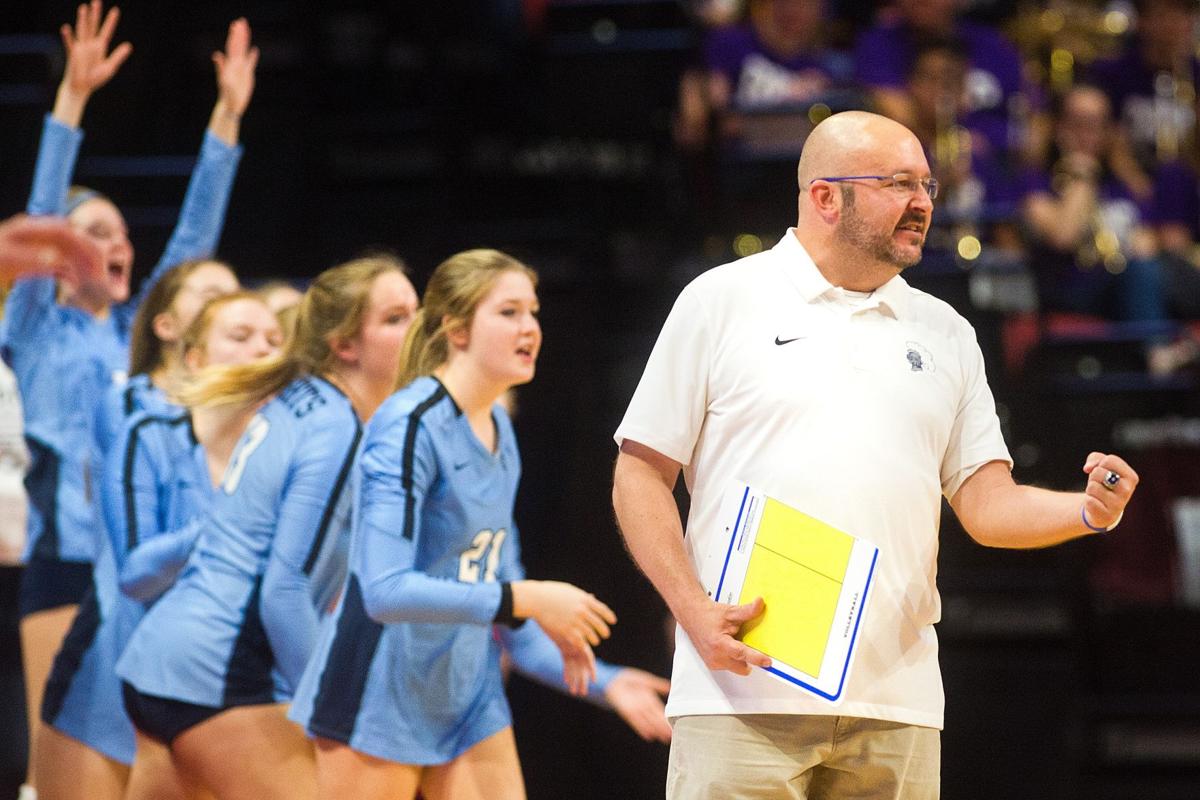 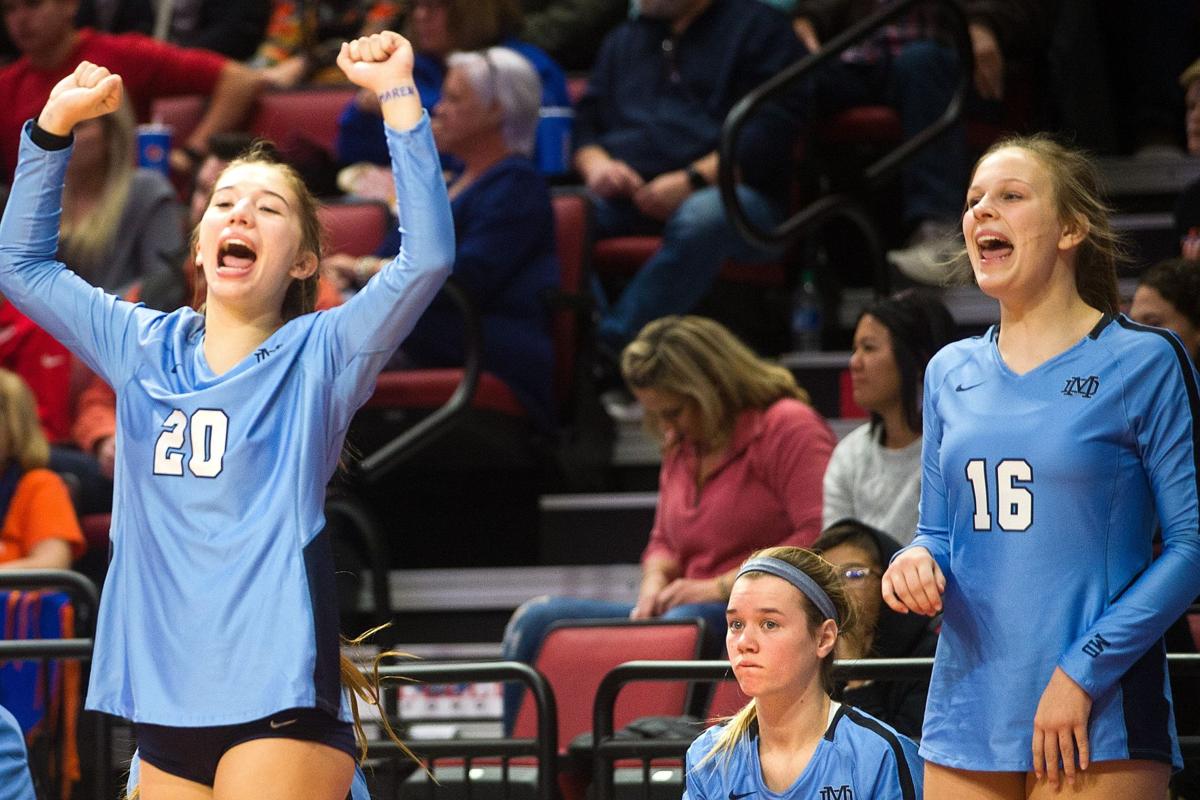 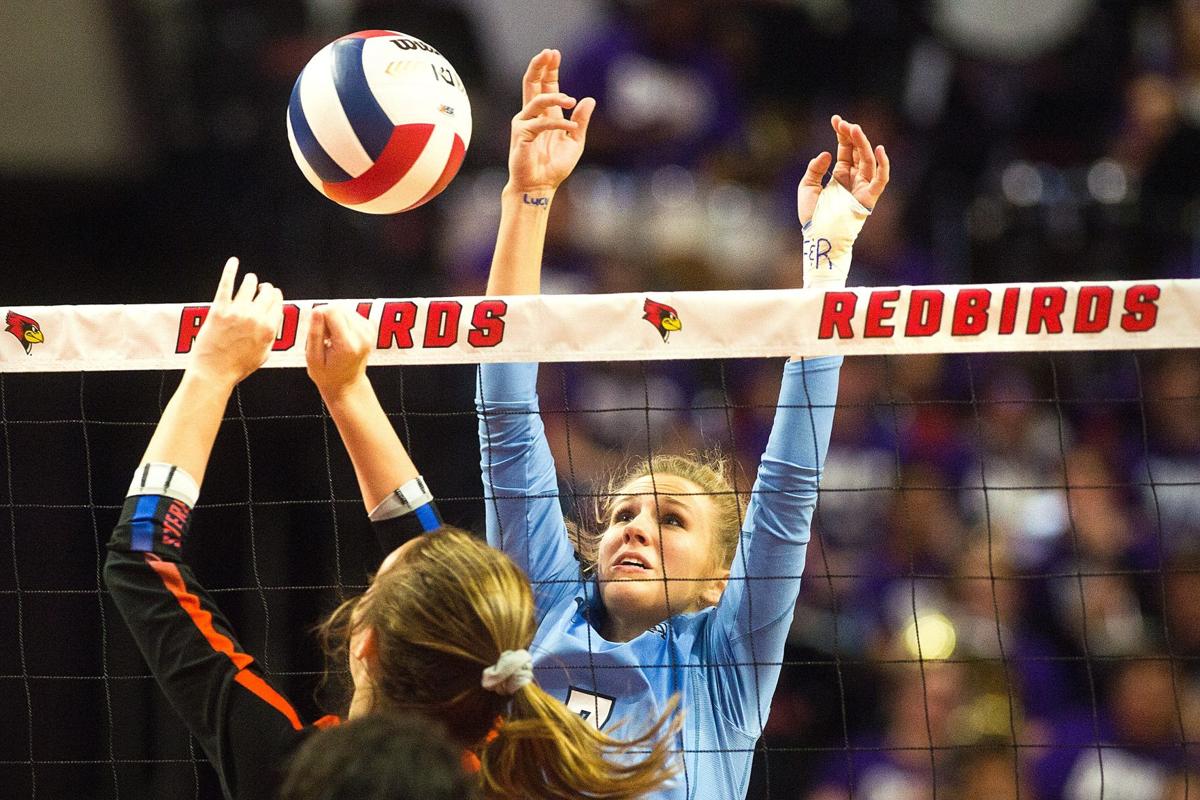 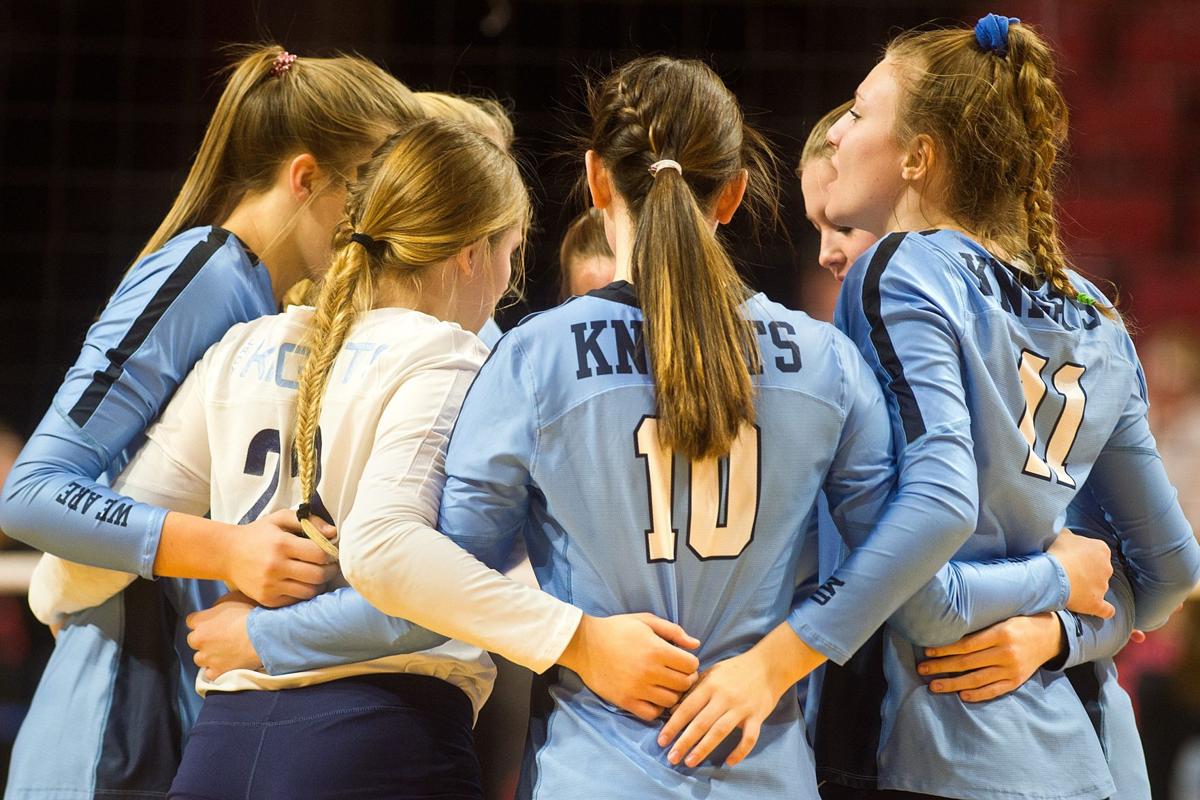 Mater Dei's Macie Beer (right) huddles with her team prior to their Class 2A state championship game against Decatur St. Teresa on Saturday, Nov. 16, 2019, at Redbird Arena in Normal, Ill. Lewis Marien, Special to STLhighschoolsports.com

NORMAL — Tori Mohesky needed a few minutes to put everything into perspective.

The Mater Dei High sophomore hitter thought for a second and then broke out a smile following the Knights' 25-22, 26-24 loss to Decatur St. Teresa in the Class 2A state championship match on Saturday at Redbird Arena.

"We came here looking for first," Mohesky said. "And we didn't get it.

Mater Dei (31-10) came up just short in its quest for an eighth state championship and its first since 2011.

The tradition-rich Knights, in their 23rd trip to the state tournament, played well but simply came up short against St. Teresa (37-5), which captured its first crown.

"It was the fist-fight that we expected to be involved in," Mater Dei coach Chad Rakers said. "Back-and-forth, point-for-point. When it comes down to it, the ball is going to roll over the net one way for one team and not for the other."

Mater Dei never got fully on track offensively. The Knights became synonymous for long double-digit point streaks during the regular season. But they never scored more than three in a row in the final set.

"There were some nerves at the start," said Timmermann, whose mom Lisa won a state title as a player at Mater Dei in 1987. "But we started getting in a groove."

The Knights made some uncharacteristic serving errors handing over five points by banging serves into the net.

But otherwise, it was a strong effort. Just not good enough against the high-powered Bulldogs, who received eight kills each from Abby Robinson and Valerie Nutakor and seven from Caliegh Craft.

Mater Dei, which survived a three-set thriller over St. Joseph Ogden in a semifinal match on Friday, struggled in the early going 24 hours later. St. Teresa bolted out to leads of 10-3 and 12-7 in the opener.

Senior Gabby Jamruk triggered a comeback with four successive service points. Riley Kleber contributed a well-placed tip off a serve from Lampe to tie the set 14-14.

But St. Teresa reeled off 10 of the next 17 points to go up 24-21. Following a miscue, Craft nailed down the set with a thunderous hit.

The Knights took an 11-10 advantage in the nightcap on a service point from Timmermann.

Myah Helmkamp added a huge hit down the stretch and she combined with Albers for a double block that gave the Breese-based school a 24-23 lead. Mohesky served for the set, but Robinson responded with back-to-back hits for a 25-24 advantage.

Lexie Huck finished out the 44-minute affair with a strong hit.

"They came after us," St. Teresa coach Brad Dalton said. "They hit hard."

The Knights were making their first final four appearance since finishing third in 2014. Rakers made sure that his players enjoyed the return to prominence.

"What an amazing group of young women that we have," he said. "I'm the lucky one that gets to be a part of this whole thing."

Rakers deflected credit for the Knights long-standing success to his father Fred, who guided the team to six state championships. Fred Rakers died in November 2013 at age 68 and Chad has done an excellent job continuing the tradition.

"What my dad has put together, this is just another piece," Rakers said.

Mater Dei returns six of seven starters including Mohesky and Timmermann, one of the stronger setter-hitter duos in the state.

"We expect to be back here next year," Rakers said.

Mater Dei's Macie Beer (right) huddles with her team prior to their Class 2A state championship game against Decatur St. Teresa on Saturday, Nov. 16, 2019, at Redbird Arena in Normal, Ill. Lewis Marien, Special to STLhighschoolsports.com