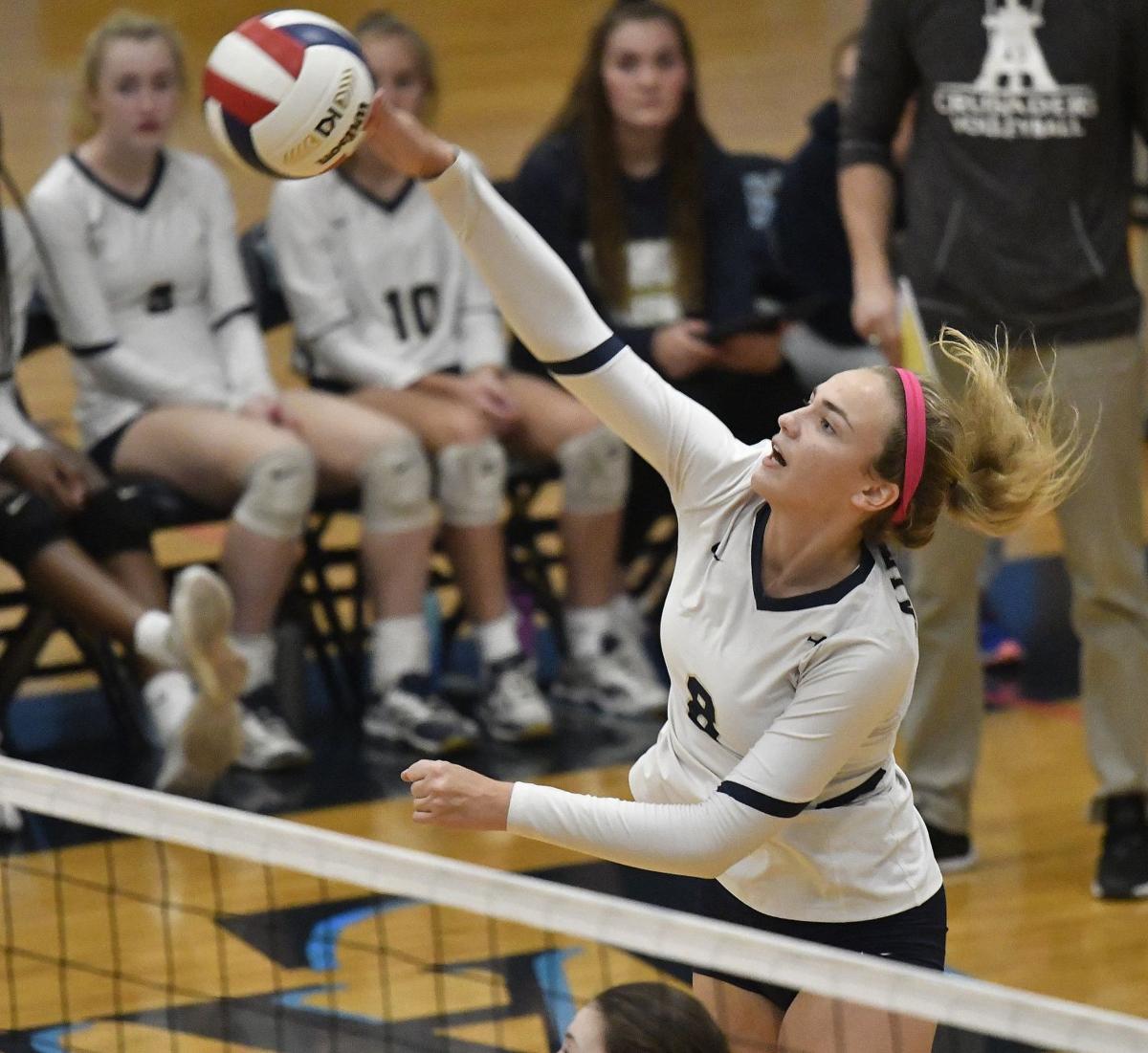 Althoff's Karinna Gall slams the ball over the net against Mater Dei during the Belleville East Metro East Classic championship on Saturday, October 5, 2019 in Belleville, Ill. Tim Vizer/Special to STLhighschoolsports.com 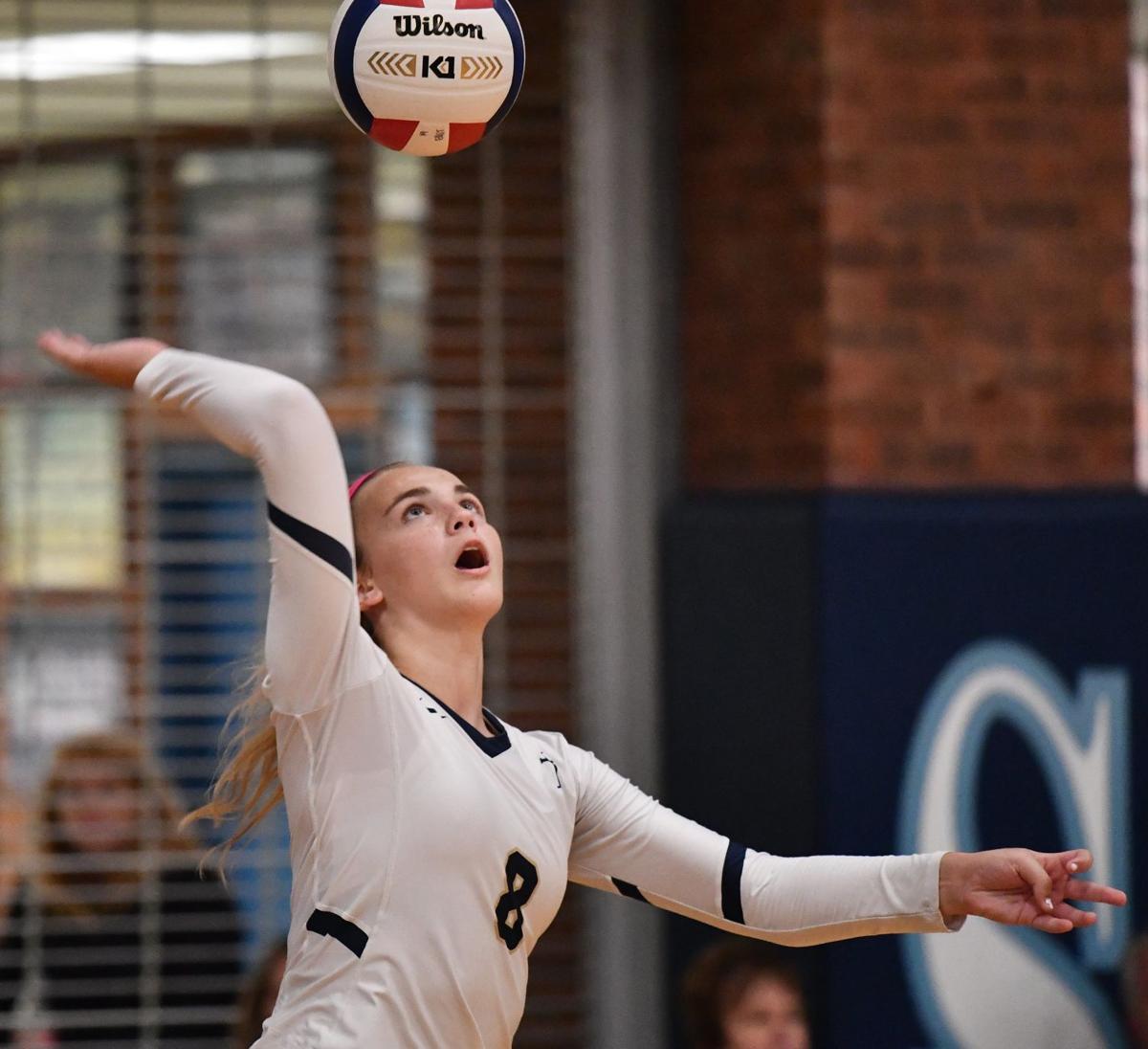 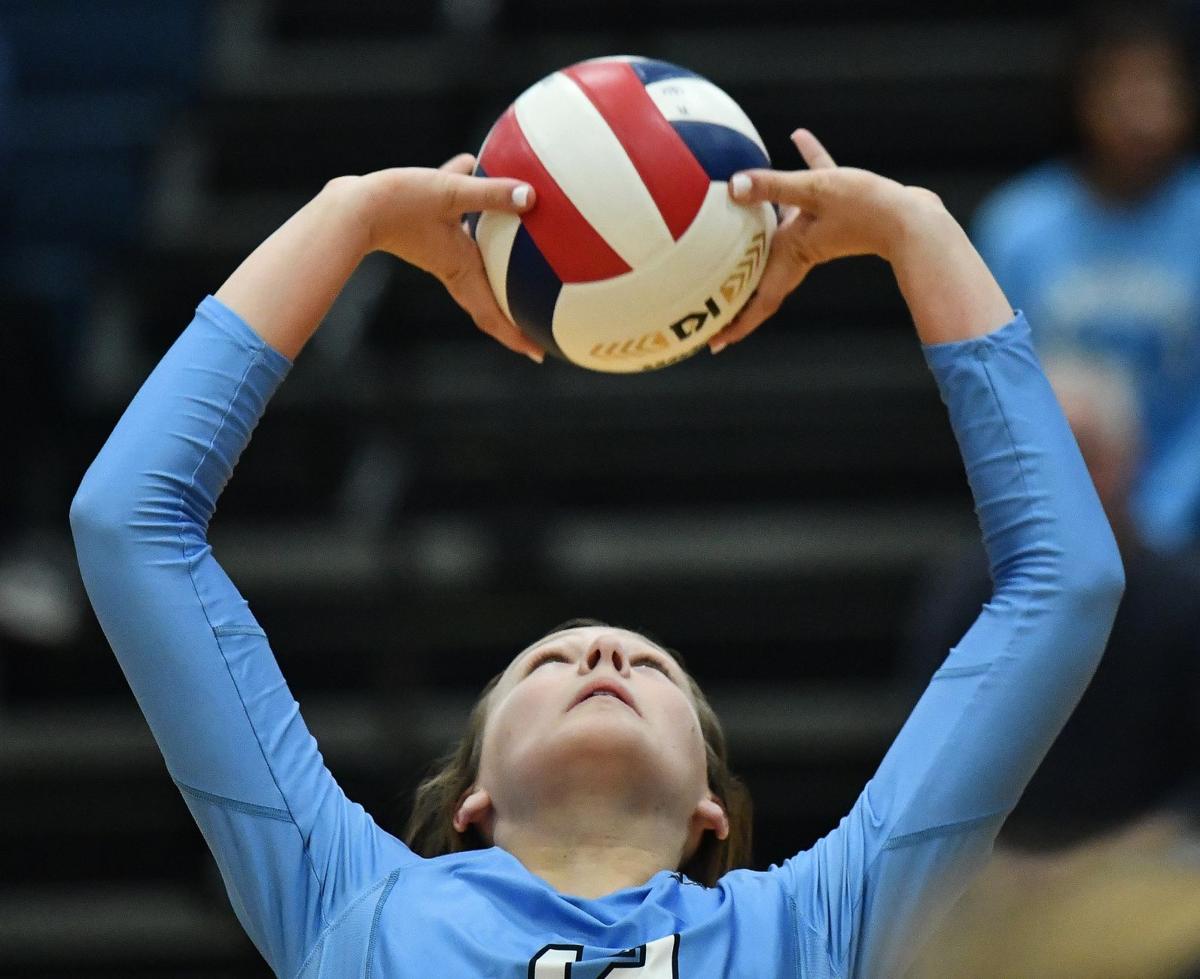 BELLEVILLE – Althoff girls volleyball coach Tony Miner believes his team is one of the most mentality tough units in the state.

That toughness was tested by Mater Dei on Tuesday night.

Nothing went right for the host Crusaders in the first set against their non-conference rival. The Knights poured it on as they rolled to a 17-point win in just 19 minutes.

“Mater Dei came out to play,” Miner said. “Their energy kind of shell-shocked us that first set I think. They came out so energized and almost nothing could go wrong for them.”

But Althoff responded as a senior-laden team that has been to state the last three seasons should.

The Crusaders picked it up on the defensive end and Karinna Gall took care of the offense, blasting home 16 kills, including nine in the third set, to lead Althoff to an 8-25, 25-19, 25-21 come-from-behind victory.

“Mater Dei is always our rival so whenever they put it to us that bad, we realized we had to make a change,” Gall said. “It motivated us. We were like that set never happened -  let’s come out and play our game.”

Katie Wemhoener put down eight kills for Althoff (22-2), No. 1 in the STLhighschoolsports small-school rankings. Mary Wessel had 27 assists to go with four kills.

“I told them between sets one and two that everything is not going to turn to gold like it did in the first set,” Mater Dei coach Chad Rakers said. “You’ve got to fight through everything they are going to bring back at you and you know they will. It was a great first set, but you don’t win 1-0.”

Mater Dei jumped out to an 11-7 lead in the third set, but Gall answered with a pair of kills. Wessel followed with a tip to tilt the scoreboard in the Crusaders’ favor 12-11.

“They were pretty good defensively so from my position in was a matter of trying different shots like deep corners and stuff so my hitters can possibly have a solo block,” Wessel said.

It was Mater Dei’s turn to respond after Althoff extended its lead to 18-15. Beer had a pair of kills and Timmermann got a kill on a pretty no-look backwards tip to give the Knights a 21-20 lead.

But Wessel answered with a pair of sets to Gall, who put them down to give Althoff a 23-21 cushion. A couple of points later, Gall fittingly ended it with a spike.

“Mary did a really good job of putting me in position to score and our passing was really on, which allowed her to free me up,” Gall said.

Mater Dei jumped out to a 16-5 lead in the first set. Mohesky had three kills and an ace, Timmermann and Riley Klebler had a combination block and Beer also had an ace during the run.

The Knights kept pouring it on with solo blocks by Sally Albers and Timmermann. Klebler followed with a pair of spikes and Mohesky added another to extend the lead to 21-7.

A Klebler block and a Mohesky kill helped bring it to set point. Timmermann finished a stellar set, in which she had nine assists to go along with two blocks, with a tip.

Althoff finally got rolling in the second set. An Abby Lanter ace got the Crusaders going. Wemhoener followed with two spikes and an ace and Gall added another kill to pump the Crusaders lead to 13-7.

Gall kept the momentum on Althoff’s side with two straight kills. Wessel won a free-ball at the net and Wemhoener put down another spike to give the Crusaders a 19-11 lead.

“They served us really tough and kept us out of system in the first set,” Miner said. “In the second set, we really did a good job, our libero Claire Franke really turned it around and she passed really well for us going forward.”

Mater Dei didn’t go down without a fight. Timmermann had a pair of tips and Albers and Beer had kills as the Knights cut Althoff’s lead to 22-19.

But Gall answered with her sixth kill of the set and Mia Orlet followed with an ace to send the match to a third set.

“Our serve receive broke down for a good bit in the second set and it just took us longer than I’d like for us to get it back together,” Rakers said. “When that happens you tend to stop moving the way that you instinctively would and start thinking too much.”

Althoff's Karinna Gall slams the ball over the net against Mater Dei during the Belleville East Metro East Classic championship on Saturday, October 5, 2019 in Belleville, Ill. Tim Vizer/Special to STLhighschoolsports.com