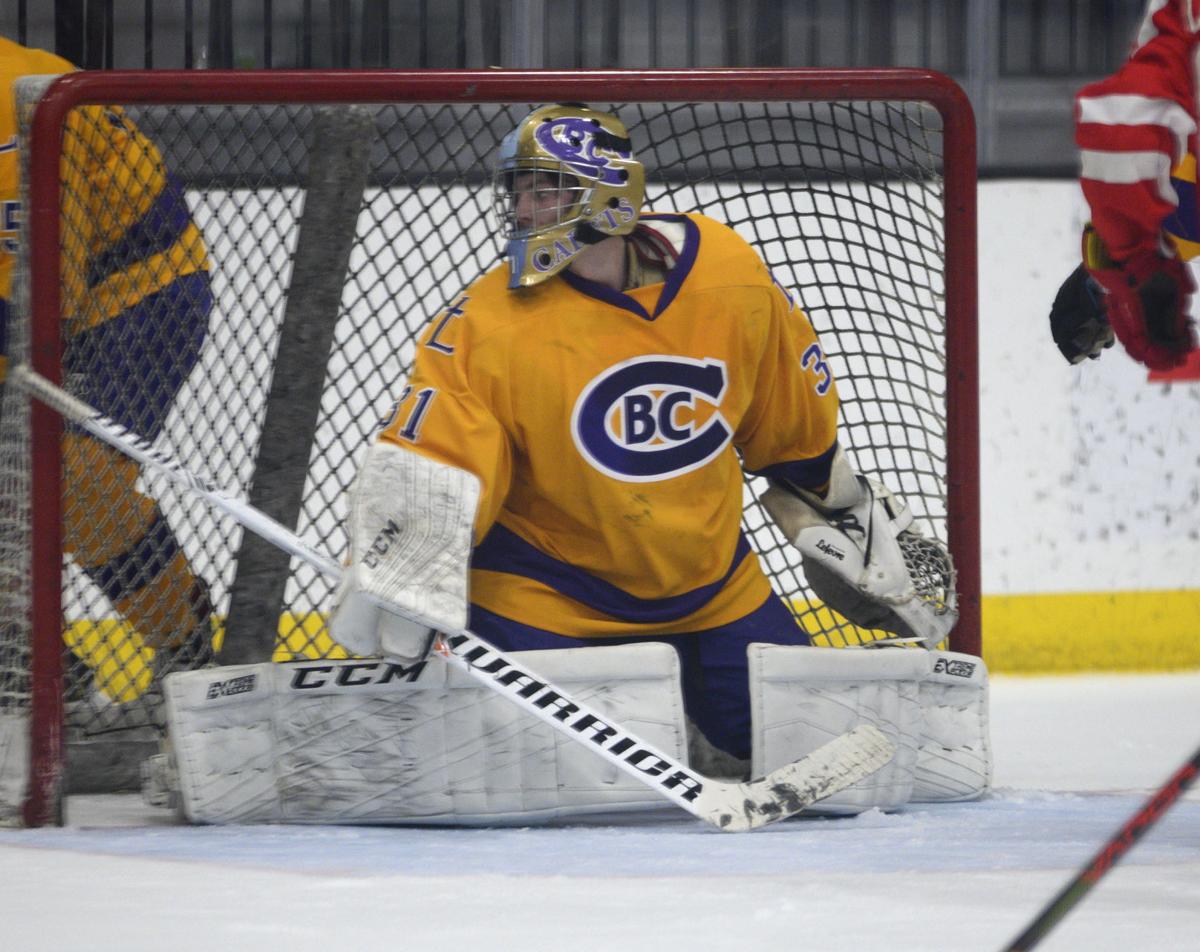 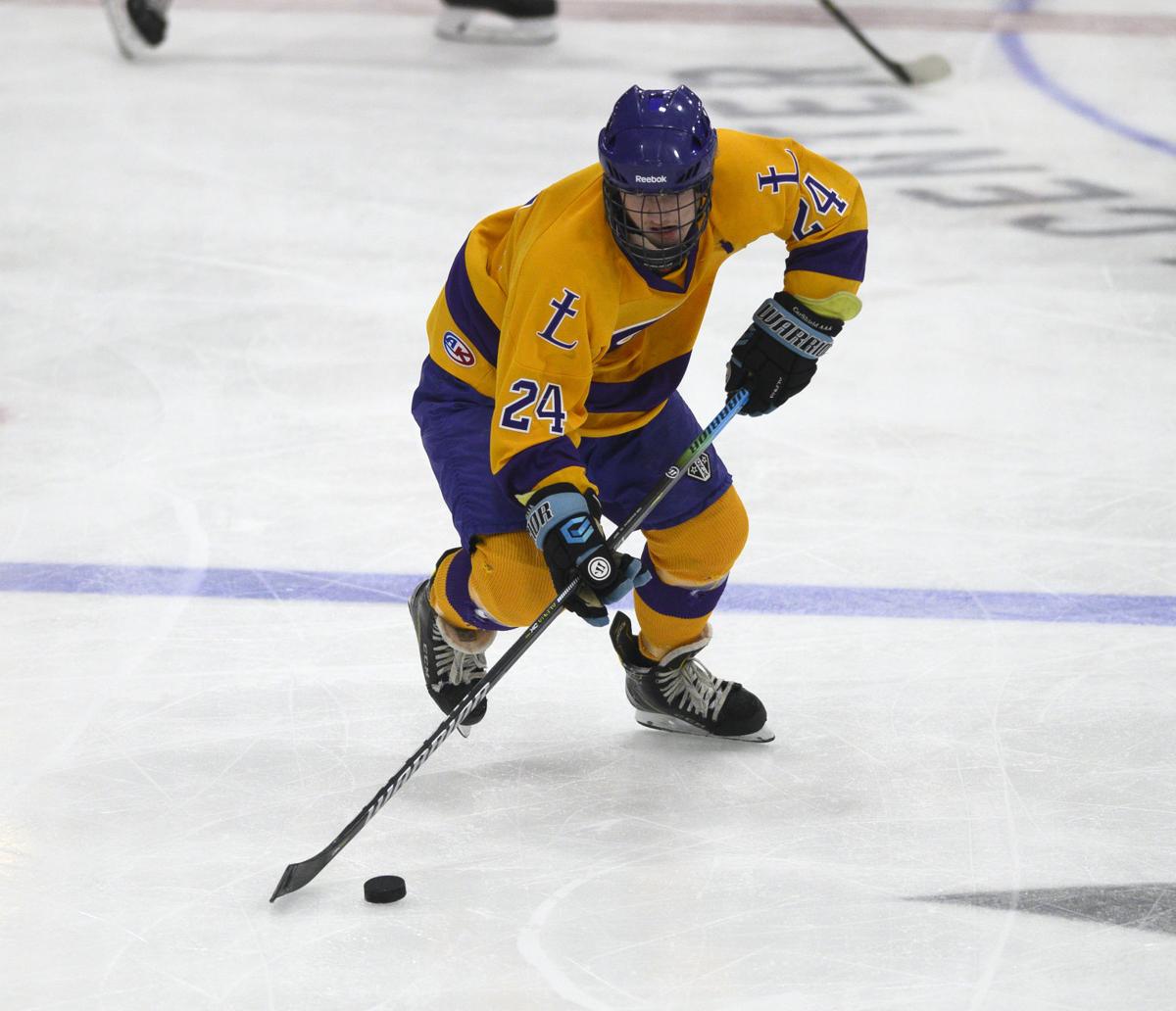 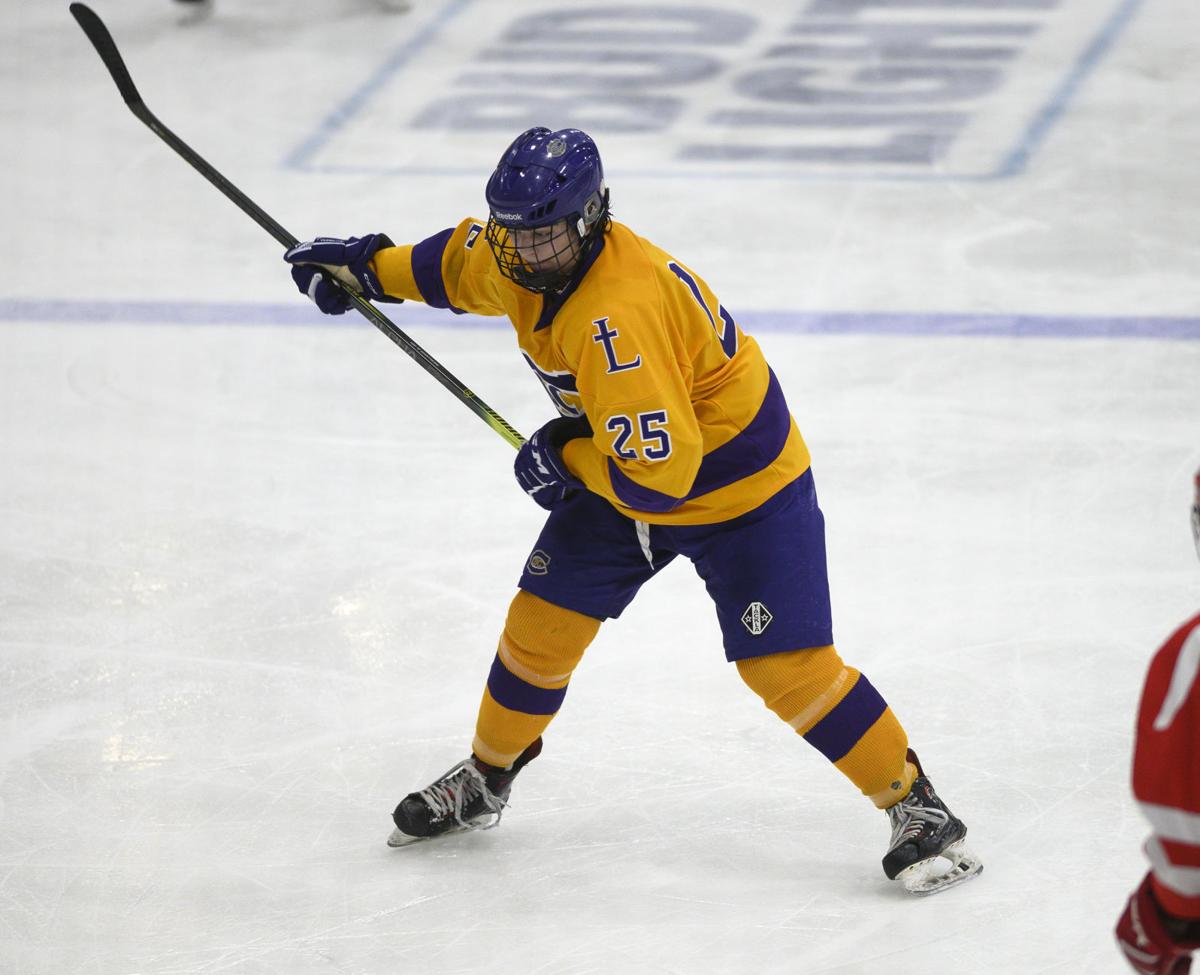 CBC's Tom Ramer (25) lines up a shot on goal during the Mid-States Challenge Cup semifinal round on Saturday, February 29, 2020 at Centene Ice Center in Maryland Heights, Mo. Paul Halfacre, STLhighschoolsports.com 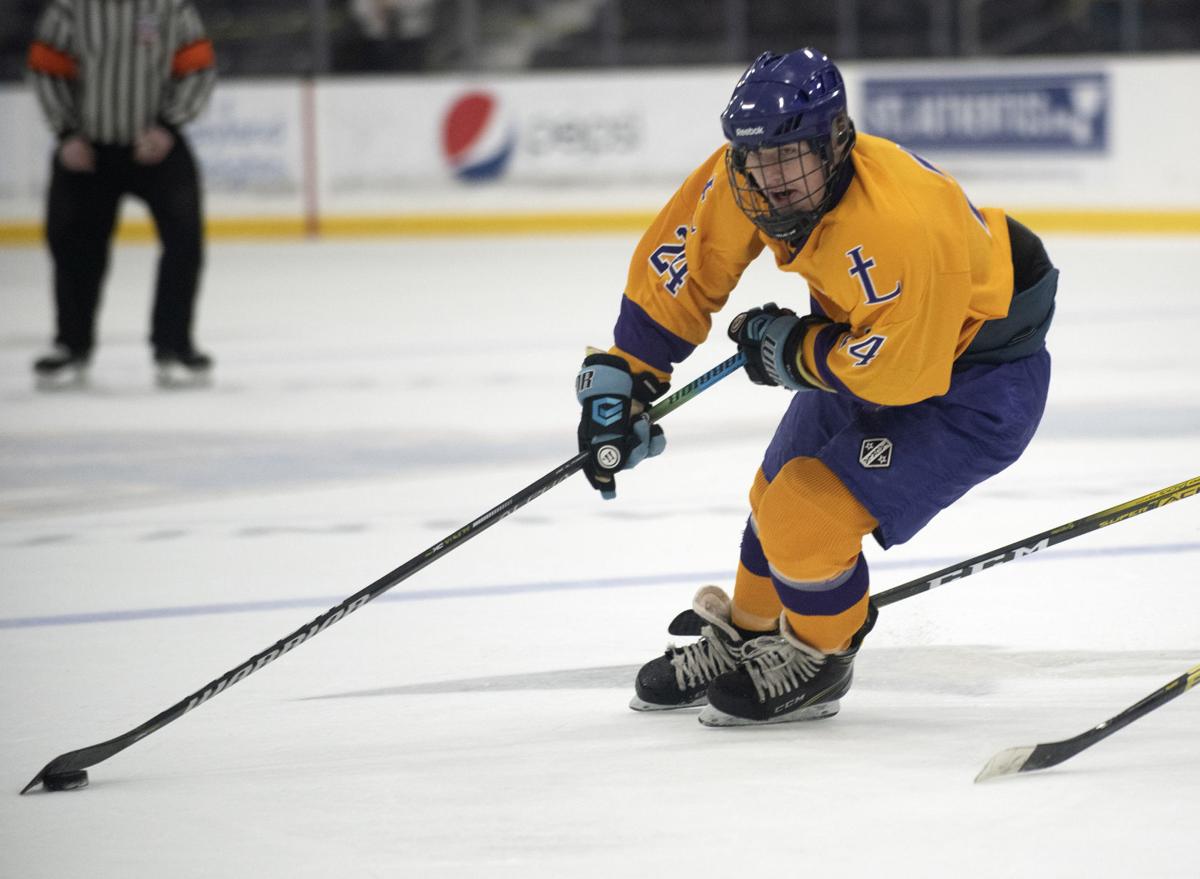 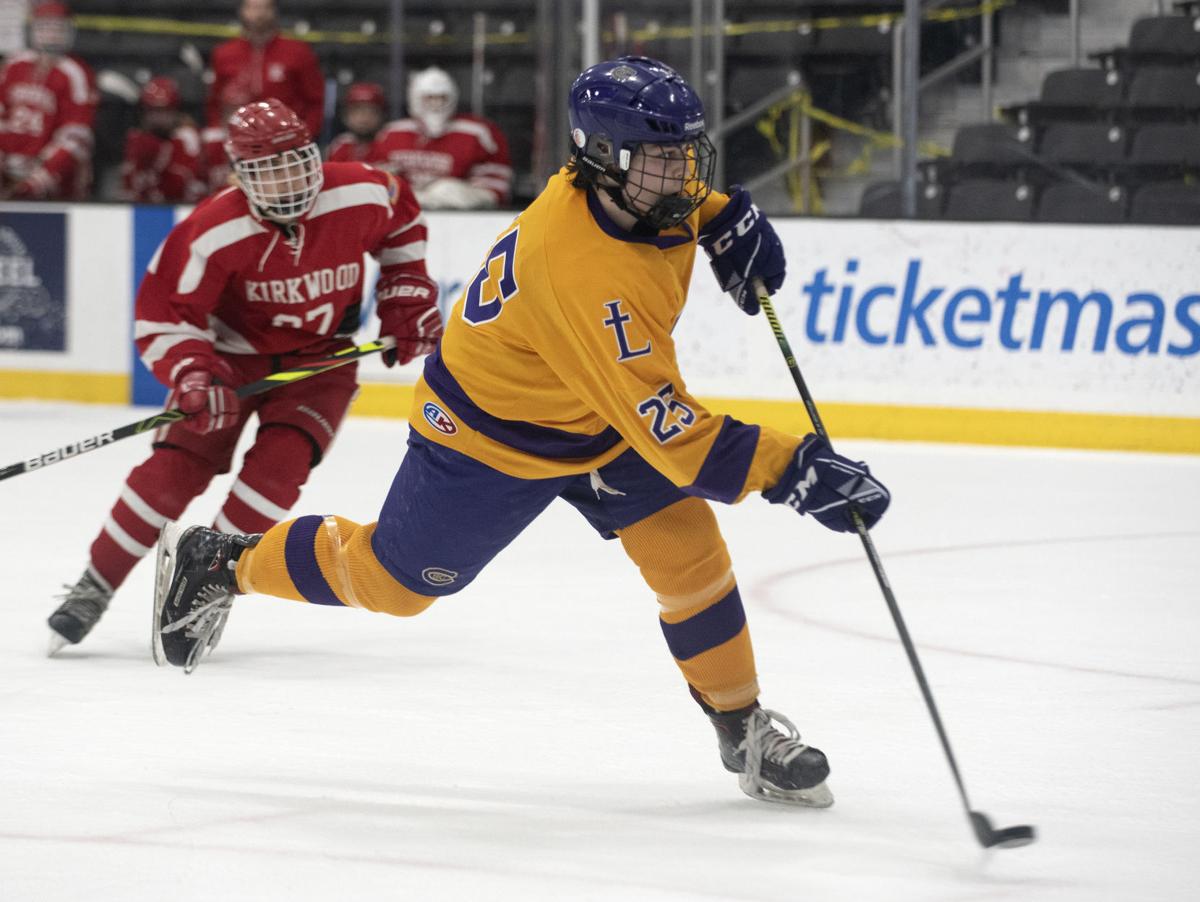 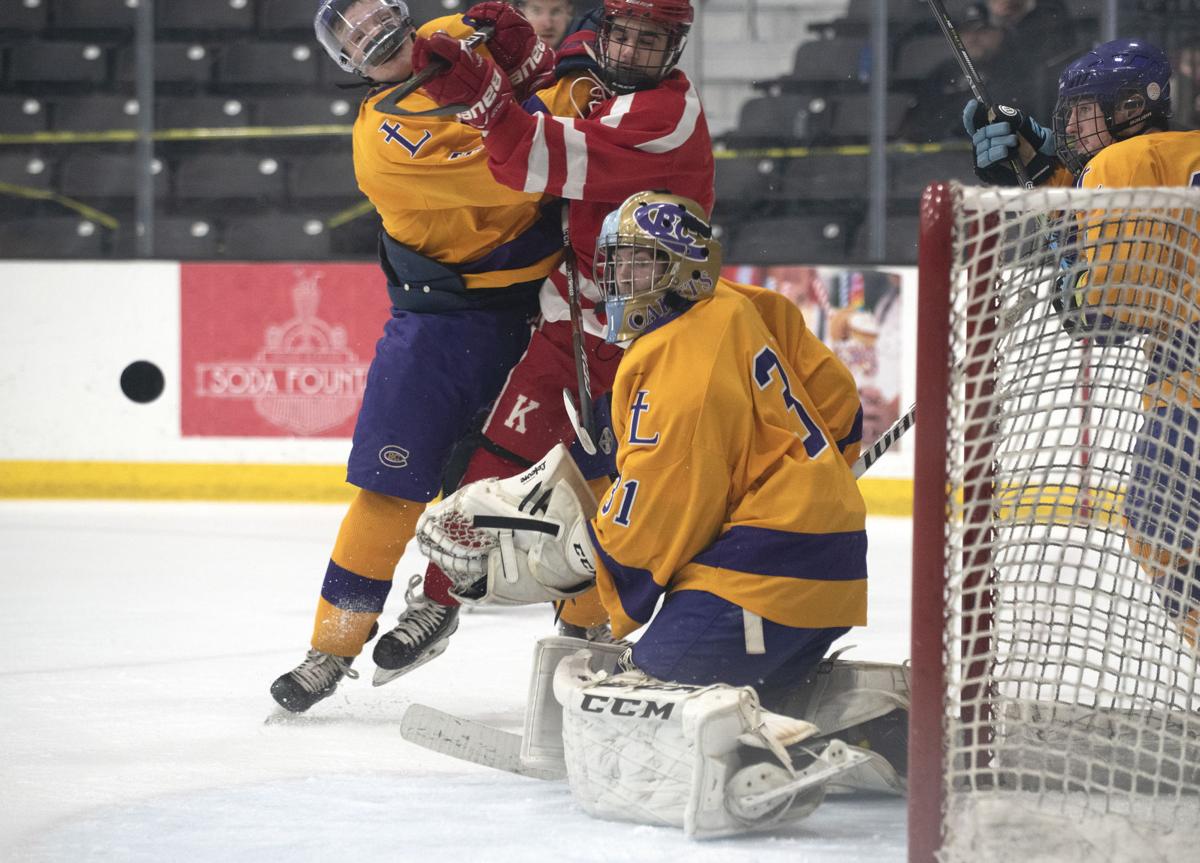 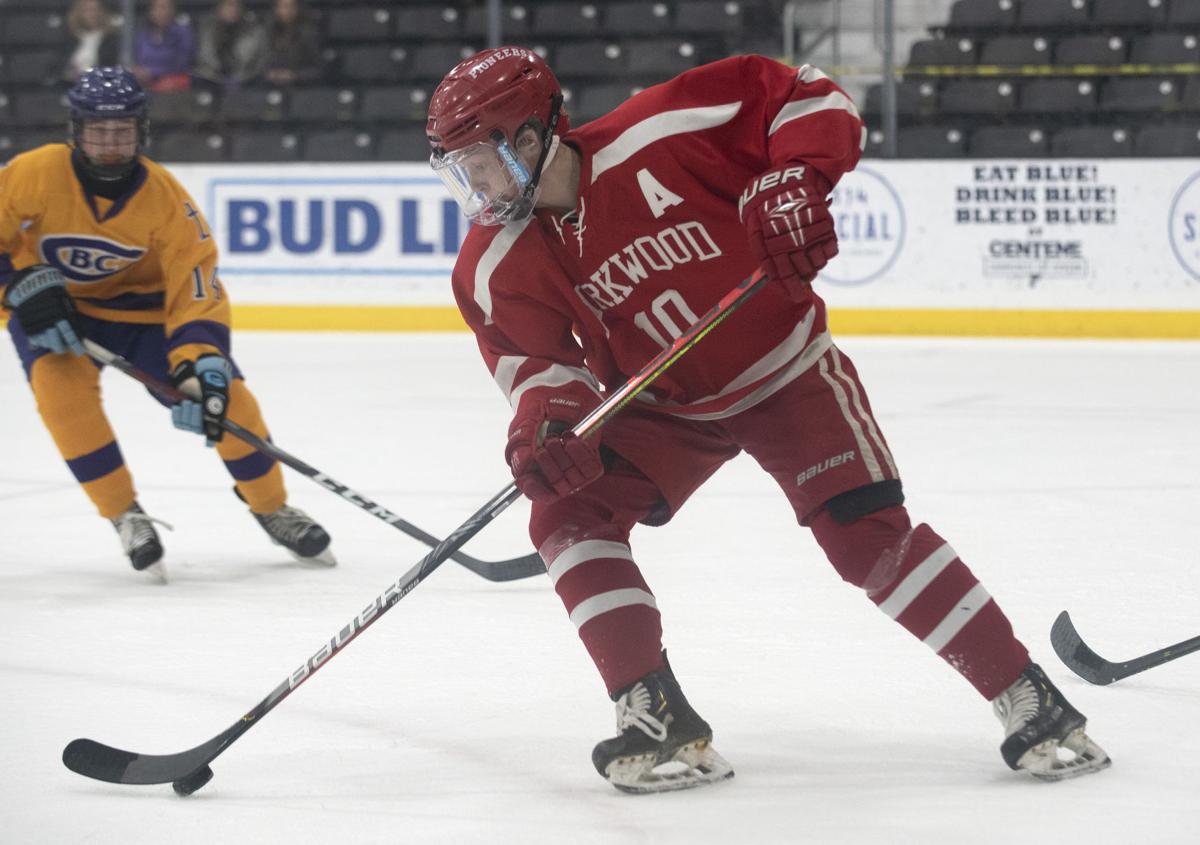 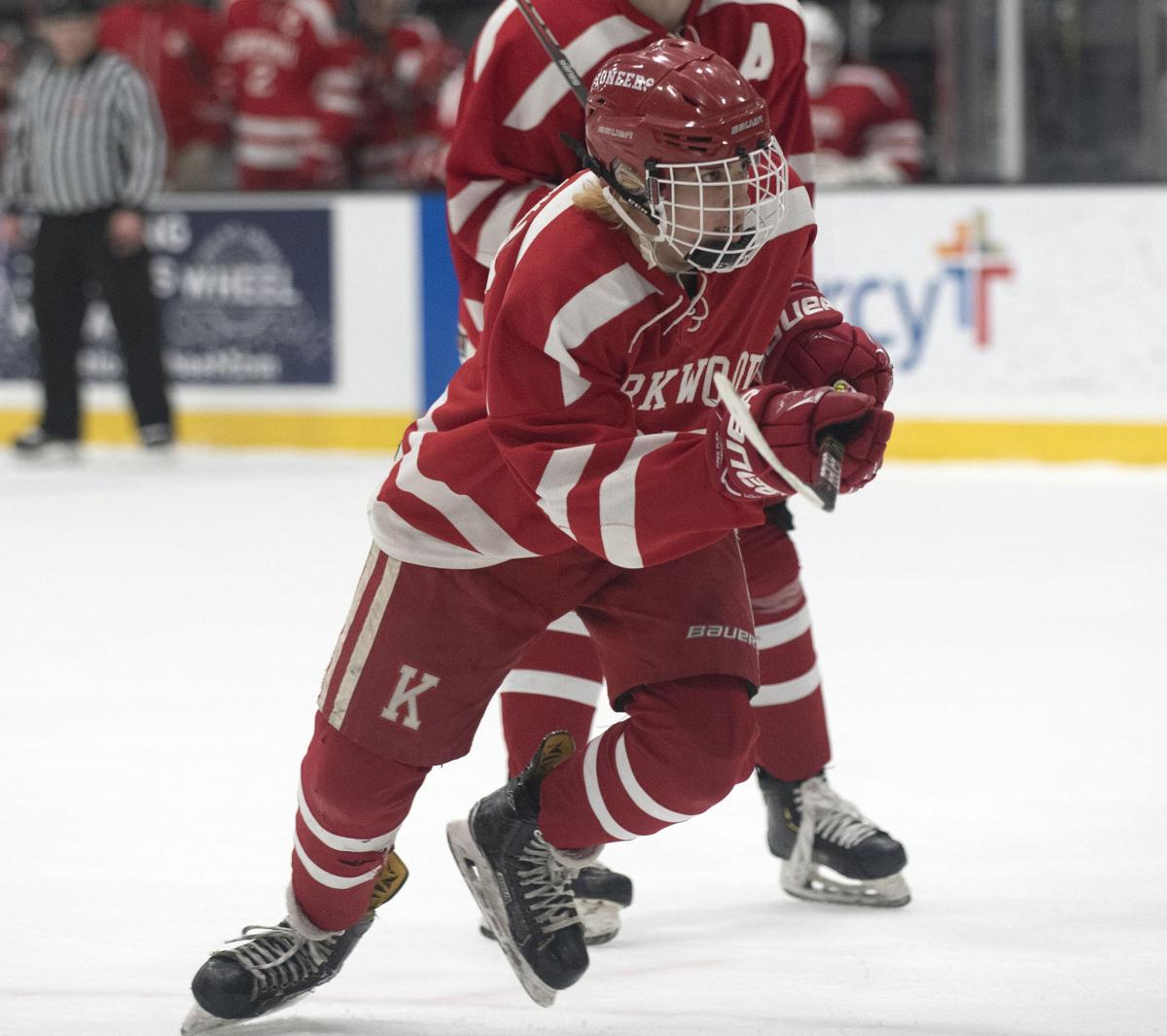 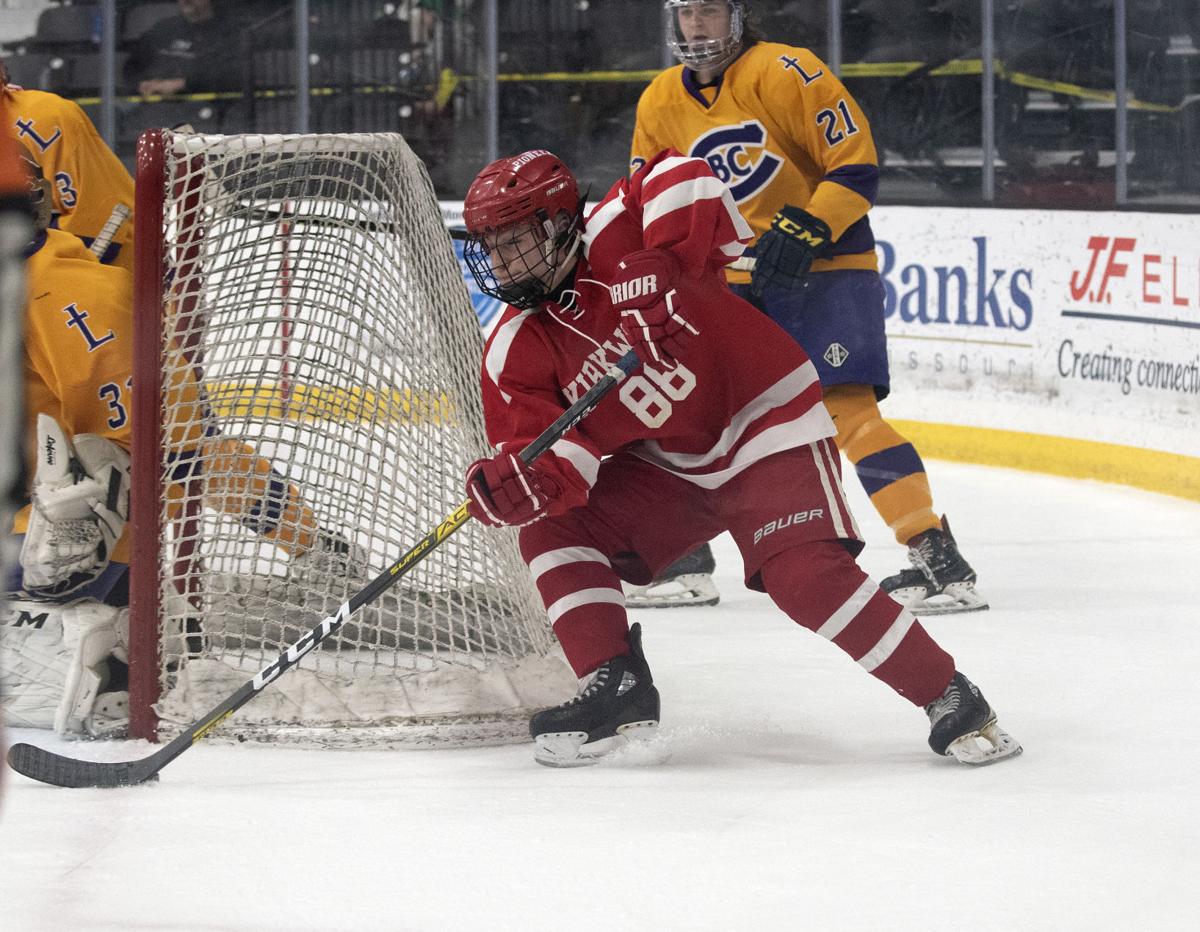 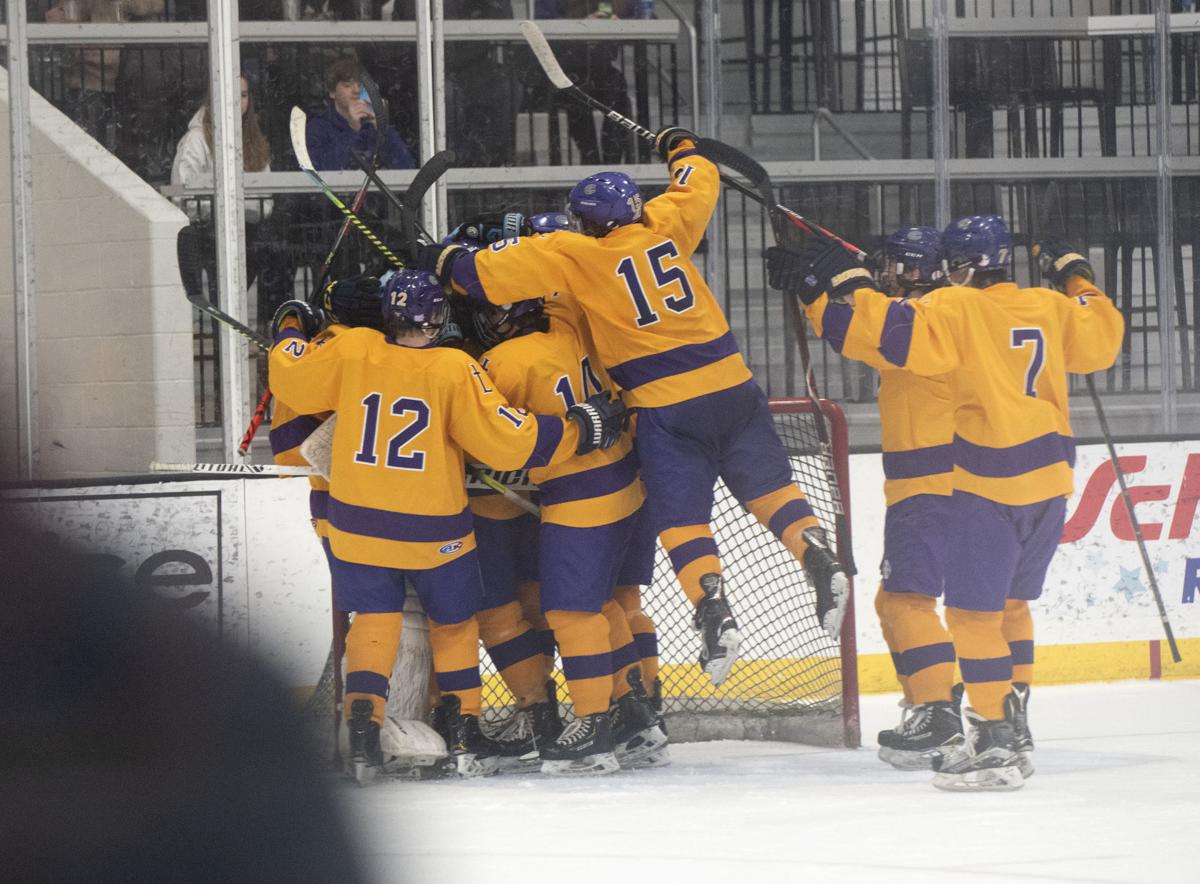 CBC's Hunter Bulger (15) leaps onto his team in celebration after the Mid-States Challenge Cup semifinal round on Saturday, February 29, 2020 at Centene Ice Center in Maryland Heights, Mo. Paul Halfacre, STLhighschoolsports.com 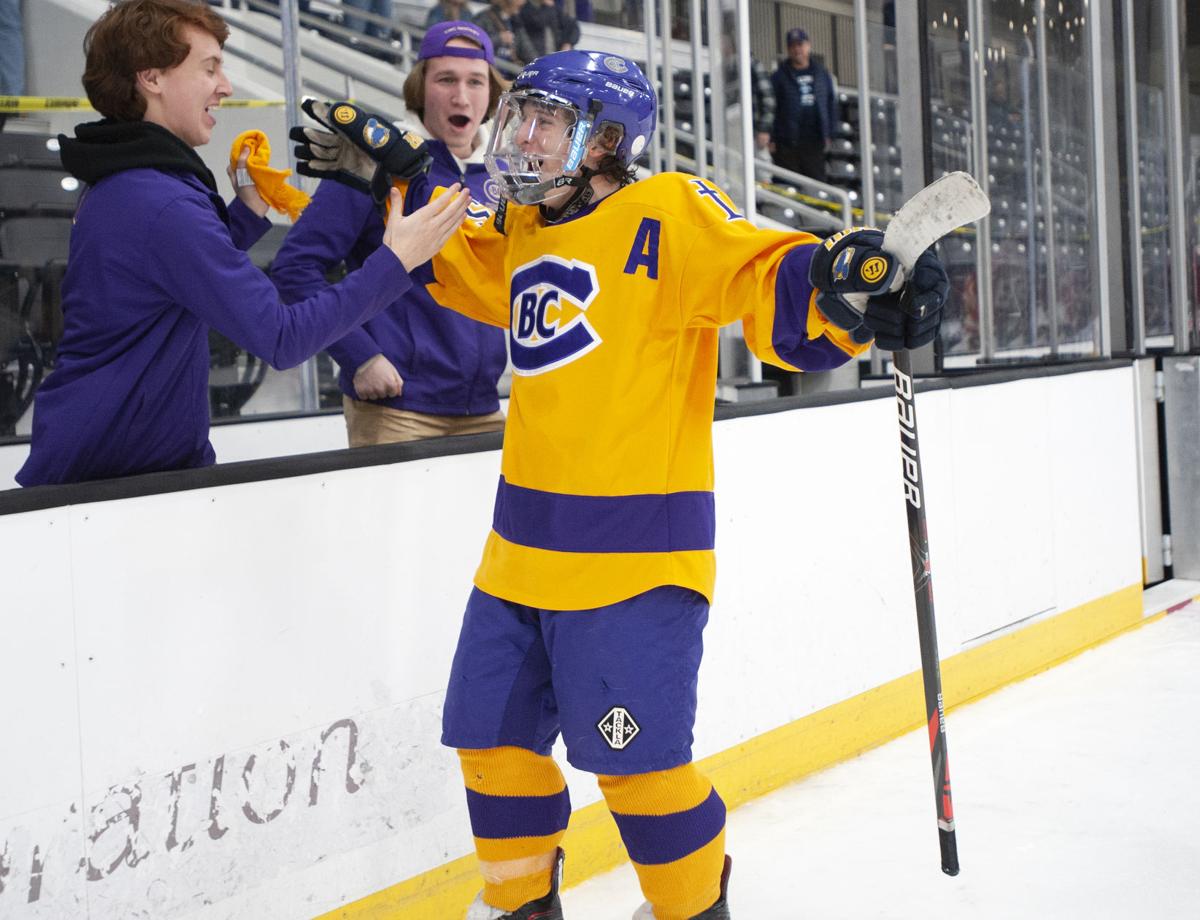 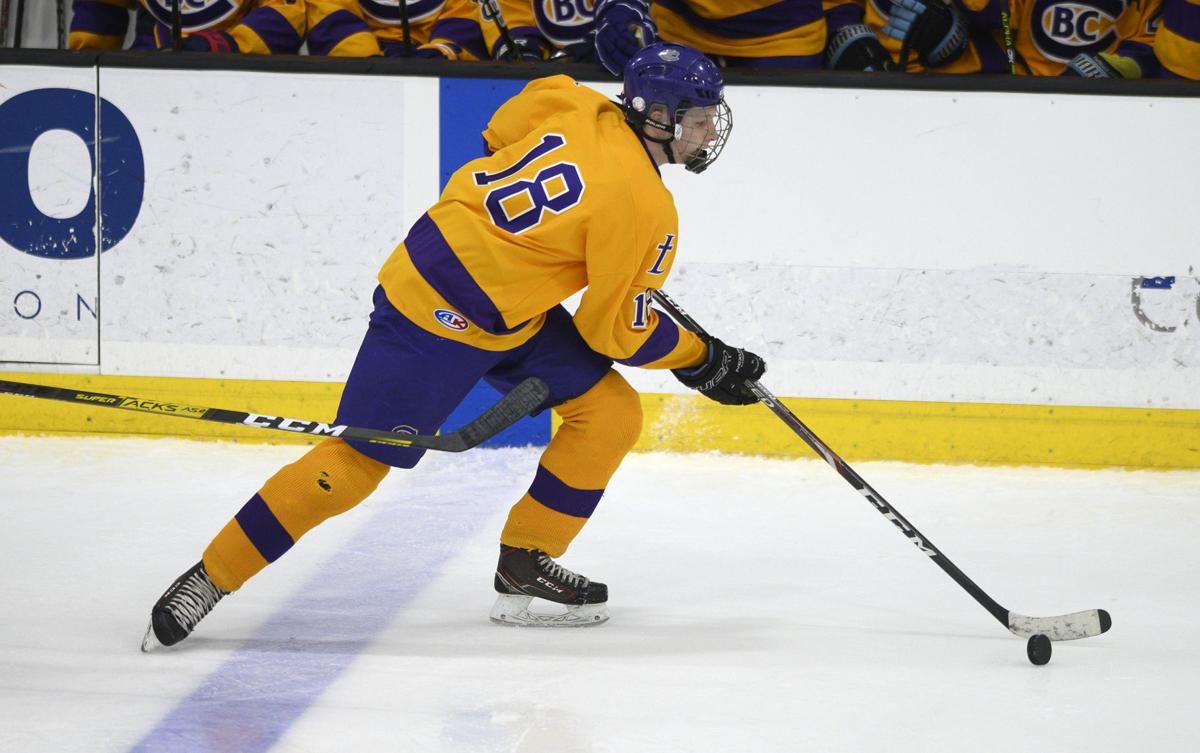 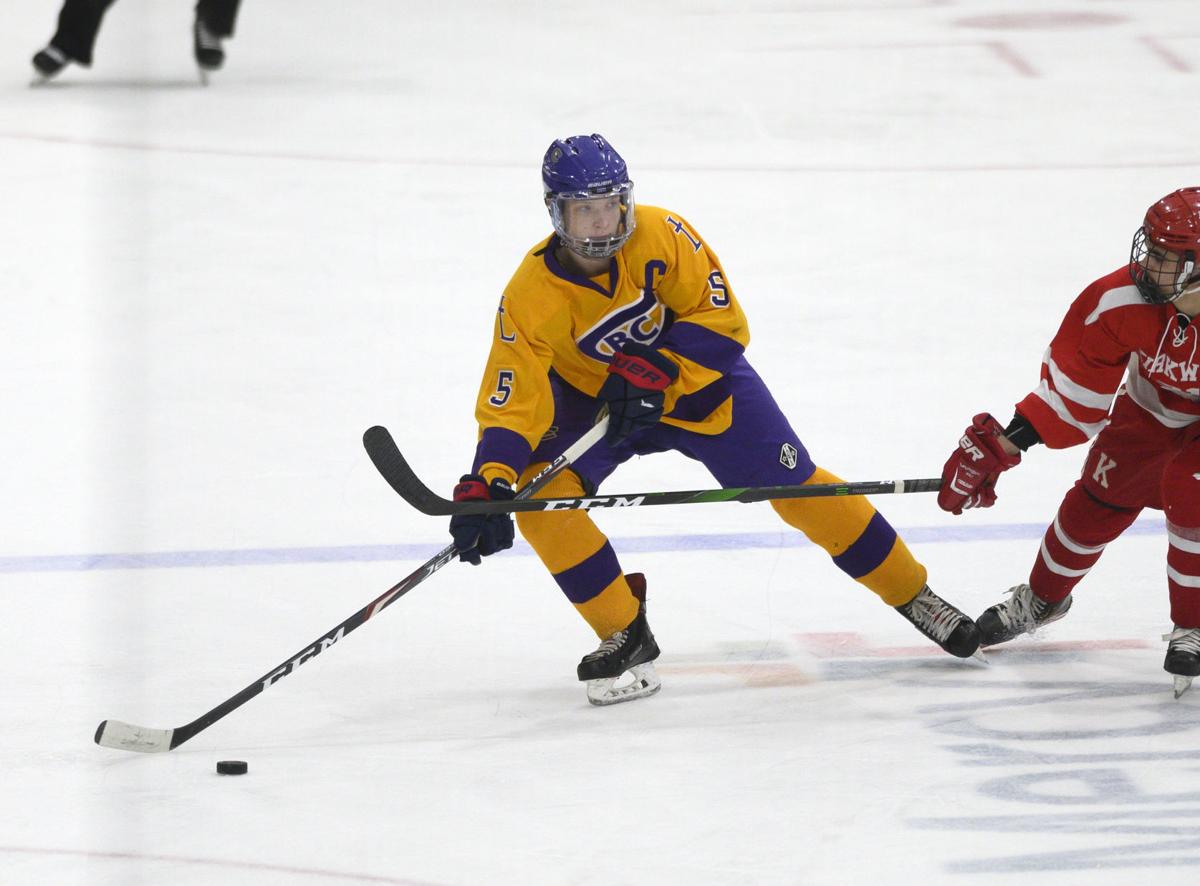 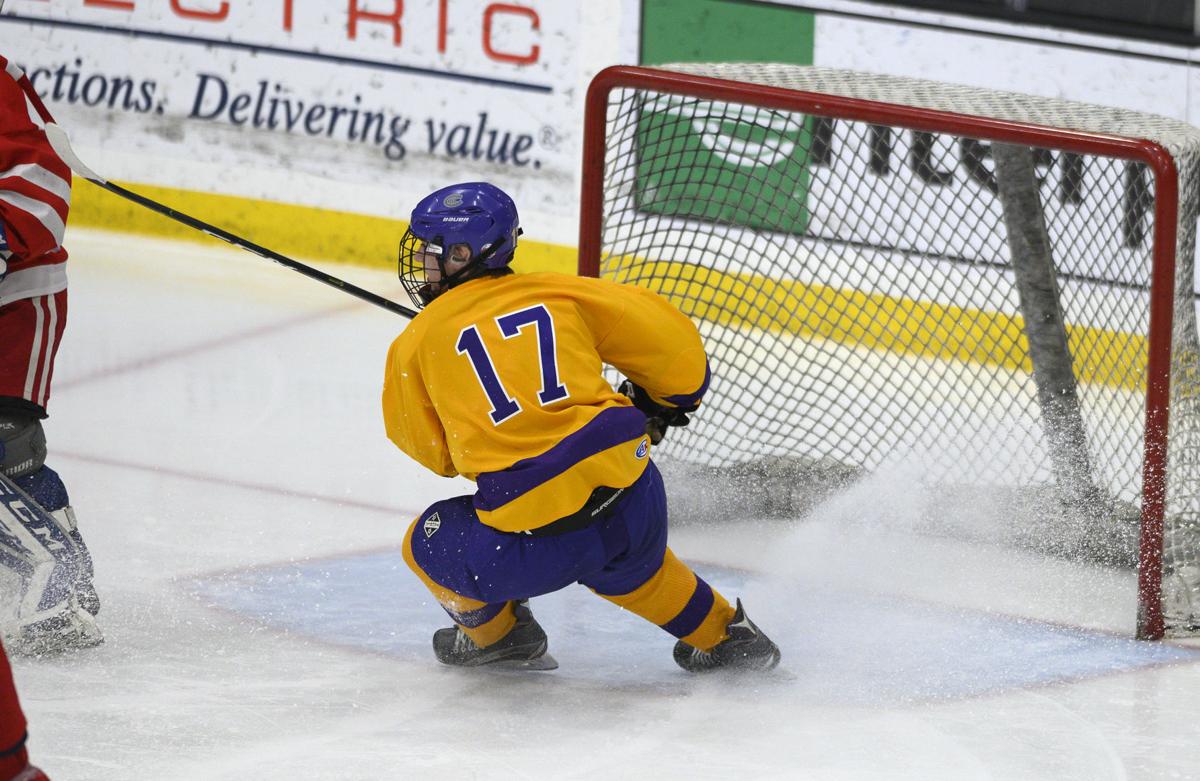 Smith had hip surgery before the campaign began. He did the three-to-six month recovery timetable in his head and knew he would be back on the ice by the end of the season.

“Rehab was difficult, but I'm just glad to be part of the team,” Smith said.

Make that a big part of the team.

Smith proved to be a purple and gold wall in front of the net during CBC’s 4-0 win over Kirkwood in the second game of its Mid-States Club Hockey Association Challenge Cup semifinal series at Centene Community Ice Center on Saturday night.

CBC (27-1-0) advanced into the Challenge Cup championship game against Vianney (20-8-1) at Enterprise Center on March 11.

“He didn't actually start playing until after the new year and he's been outstanding since he's been here,” CBC coach John Jost said of Smith. “I know this was extra special for him.”

Hunter Bulger and Riley Howse each had a goal and an assist and Benjamin Kleinschmidt and Thomas Ramer also scored for CBC. Smith made 24 saves to earn his first shutout of the season.

“He had hip surgery six months ago, comes back and gets a shutout in the semifinals to get us to the Enterprise Center, there’s nothing better than that,” Bulger said.

Mitchell Day made 20 saves for Kirkwood (13-10-5), which had its season end in the Challenge Cup semifinals for the second successive season.

“It was obviously another special journey for us to make back-to-back semifinals and that says a lot about the kids and the culture we created,” Kirkwood coach Mark Fischer said. “I'm not happy with the way the game ended obviously, but I'm really happy with the journey, so I can't thank the kids enough.”

Bulger gave CBC the lead just 15 seconds into the game with an unassisted goal.

“I saw Howse, he was trying to go to Tony (Andrews) on the wing, but it just bounced off the boards, and it's just lucky enough to sit right there,” Bulger said. “I picked up my feet, I got moving and I put it five-hole. It was nice.”

Riley Lutkemeyer had a chance to draw Kirkwood even midway through the first, but Smith got his left arm on the shot at the last second.

Kleinschmidt’s power play goal gave CBC a 2-0 lead at the 3 minute 32 second-mark of the second. The tally came with Kirkwood just 10 seconds away from killing off a prolonged 5-on-3 shorthanded stint.

Ramer made it 3-0 CBC with another power play goal with 2:37 left in the second. Bulger got the assist.

“I think timely scoring (was key),” Jost said. “I think jumping out early in both games helped and I think the goaltending in both games was terrific. They’ve got some forwards that can really hurt you and we were able to keep them off the score sheet.”

Smith stood tall as the Pioneers made a final push in the third period.

Smith came up big in stopping a two-on-one break by Kirkwood’s Seamus Campbell and Carson Day and he was able to eventually smother the puck after a couple of rebound chances.

“My defense was great all night,” Smith said. “I could see everything in the third period and I couldn't thank them enough and I wouldn't be here without them.”

Howse’s goal with 7:18 left in the third gave CBC a commanding 4-0 lead and scuttled any comeback hopes by the Pioneers. The tally was set up by a perfect feed from Andrews.

CBC needed third-period rallies in both of its wins over Vianney in the regular season. Beating the Griffins for a third time won’t be easy.

Vianney snapped a 46-game losing streak to CBC going back to 2007. It is the third Mid-States championship for the Golden Griffins and first since 1996.

Vianney snapped a 46-game losing streak to CBC going back to 2007. It is the third Mid-States championship for the Golden Griffins and first since 1996.

CBC's Tom Ramer (25) lines up a shot on goal during the Mid-States Challenge Cup semifinal round on Saturday, February 29, 2020 at Centene Ice Center in Maryland Heights, Mo. Paul Halfacre, STLhighschoolsports.com

CBC's Hunter Bulger (15) leaps onto his team in celebration after the Mid-States Challenge Cup semifinal round on Saturday, February 29, 2020 at Centene Ice Center in Maryland Heights, Mo. Paul Halfacre, STLhighschoolsports.com