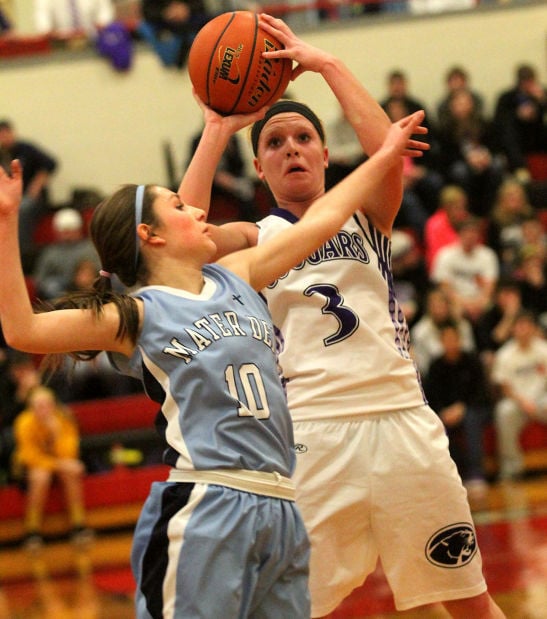 April Gebke (3) of Breese Central takes a jump shot over a lunging Lindsey Perkes of Mater Dei during a semifinal game in the Highland Tournament on Thursday, January 17, 2013 at Highland High School in Highland, Ill. Paul Kopsky, STLhighschoolsports.com 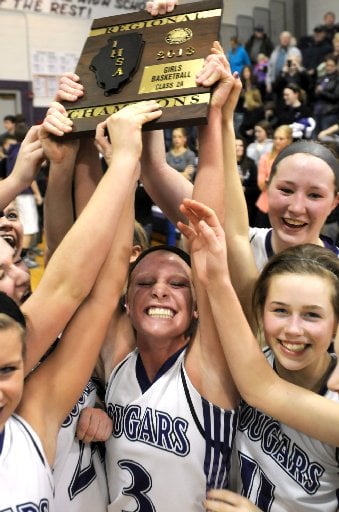 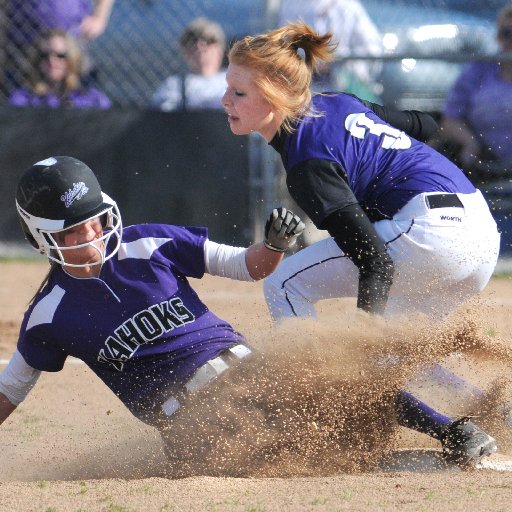 Collinsville's Becky Gibbs (9) slides safely into second base before Breese Central's April Gebke (3) can tag her out in the first inning of a non-conference game between the Breese Central Cougars and the Collinsville Kahoks at the Jaycee Sports Complex in Collinsville, Ill. on Friday, April 5, 2013. John Swistak Jr., STLhighschoolsports.com

Breese Central senior April Gebke decided to go with basketball over softball next year at Parkland College in Champaign -- much to the relief of any future potential softball opponents.

"It was a really tough decision for me," Gebke said, "but I feel better playing basketball. It seems like it comes more natural for me. I have a feel for the game that I don't quite have for softball. But it was hard to pick, because this makes it my last year of playing softball."

Once softball ends in June, Gebke will focus 100-percent of her athletic pursuits to the basketball court. It will be interesting to see how much better the crafty-point guard can become since she is already adept at making foes miserable on the hardwood.

Gebke is the type of player, who is seemingly in the right place at the right time for her team. The player who comes up with a loose ball or a long rebound. The type of player, who doesn't lead the team in scoring, but seems to always score the crucial bucket or makes an opponent pay for making the slightest mistake or misstep.

"She is an excellent distributor," Central basketball coach Nathan Rueter said. "She does a terrific job of creating for her teammates and for herself. She's tough to guard and she is a pesky defender. She did a great job for us getting the ball down the floor and getting our team in gear."

Gebke was an all-Mississippi Conference selection and helped guide the team to a perfect 10-0 conference record and 29-3 overall mark. She scored 8.2 points, grabbed three rebounds and led the team with 2.5 assists and 2.2 steals. She was all-tournament at Pana, Highland and Mascoutah.

"April has worked really hard to be as good as she is," said junior Torre Kohrmann, who plays alongside Gebke in basketball and softball. "In basketball, her desire, ability to dribble and dribble with speed makes her tough to guard. She's a very good shooter and loves to compete."

In softball, where Gebke bats lead off and plays shortstop for the Cougars, Kohrmann said: "She just knows the game. She makes quick decisions and gets the team going. She has really quick hands and can hit. You can always count on April to somehow get on base."

While Gebke is a talent in basketball, she is equally adept on the softball diamond. Her ability at the plate is superb, but her defense really stands out. With only 60-feet between the bases and the bang-bang nature of hard hit balls on the infield, double plays are rarely turned in the sport. Not for Gebke, in the Cougars season opener against Roxana, Gebke turned two doubles plays in the first four innings. Once retrieving a ball from deep in the hole and the other she handled on her own when she fielded a hot shot while going to her left, she stepped on the bag at second and fired a strike to first.

"She makes plays at short that are unbelievable," Central softball coach Robbi Howard said. "I pretty much know if a ball is hit anywhere near her it's going to be an out. It's a good feeling knowing she is over there. You just know, she's going to get the job done."

At the plate, Gebke is just as dangerous. She is hitting .459 with an on-base percentage of .476. She leads the team with 19 runs, eight doubles, nine stolen bases, a home run and 13 RBI. She has whiffed just twice in 63 plate appearances.

"I think I could probably do OK if I kept playing softball," Gebke said, "but I think I will be happier playing basketball."

April Gebke (3) of Breese Central takes a jump shot over a lunging Lindsey Perkes of Mater Dei during a semifinal game in the Highland Tournament on Thursday, January 17, 2013 at Highland High School in Highland, Ill. Paul Kopsky, STLhighschoolsports.com

Collinsville's Becky Gibbs (9) slides safely into second base before Breese Central's April Gebke (3) can tag her out in the first inning of a non-conference game between the Breese Central Cougars and the Collinsville Kahoks at the Jaycee Sports Complex in Collinsville, Ill. on Friday, April 5, 2013. John Swistak Jr., STLhighschoolsports.com