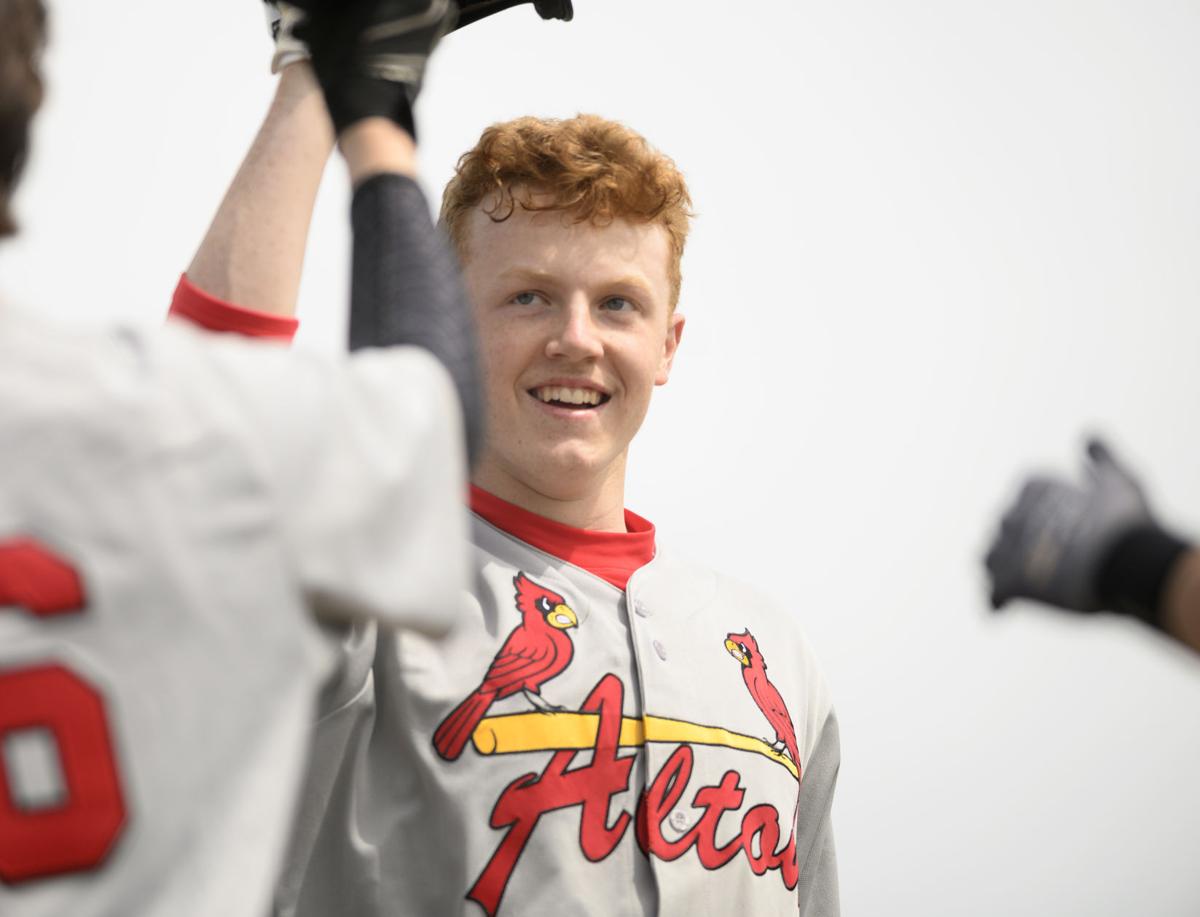 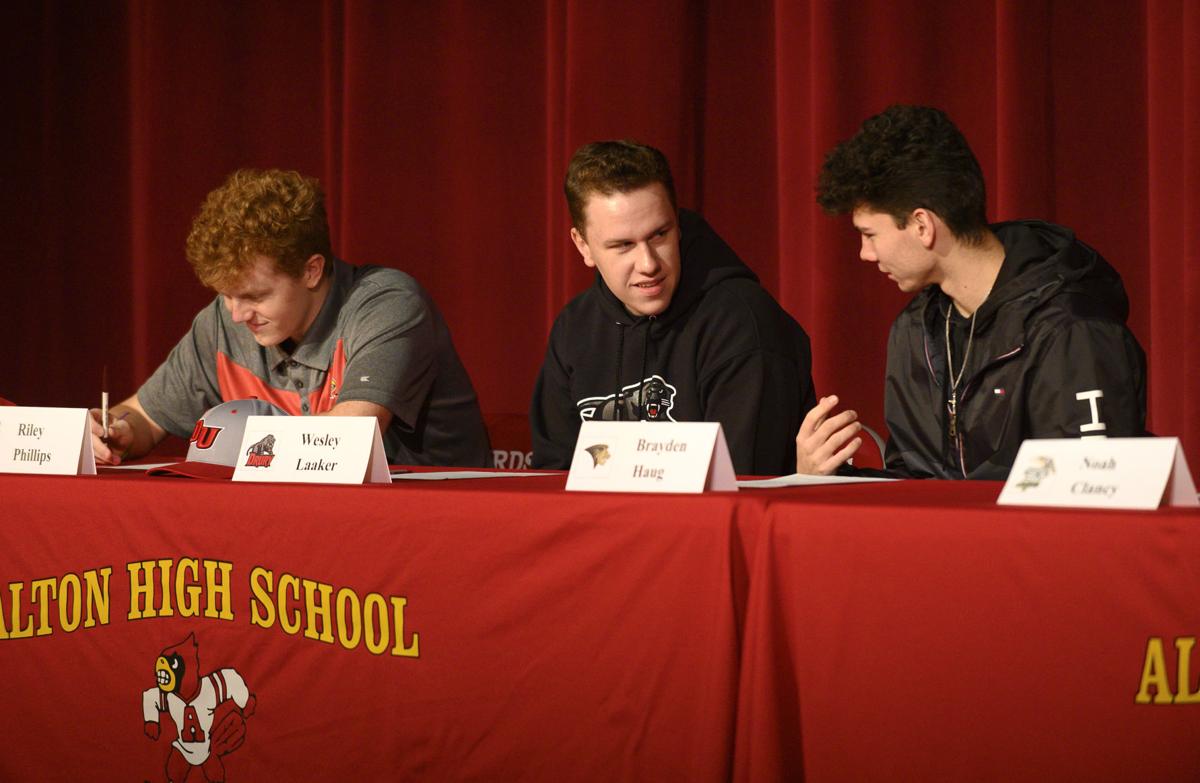 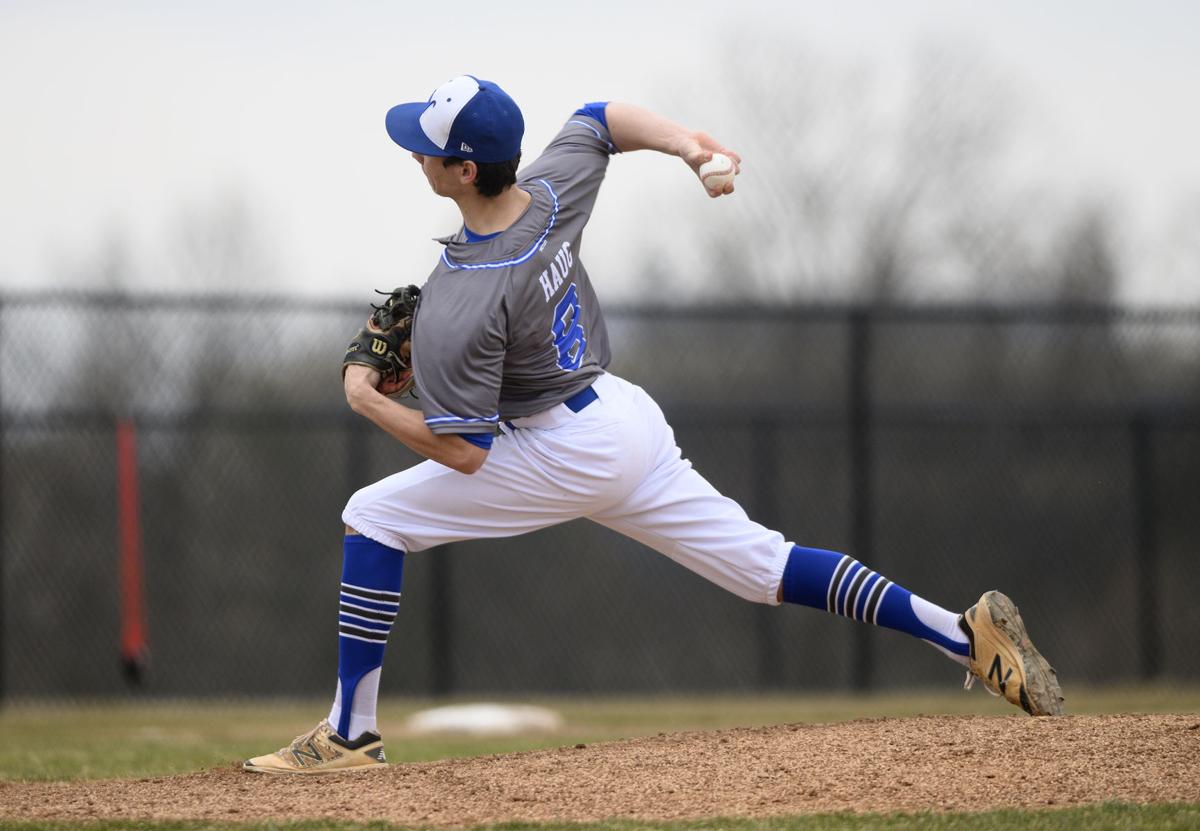 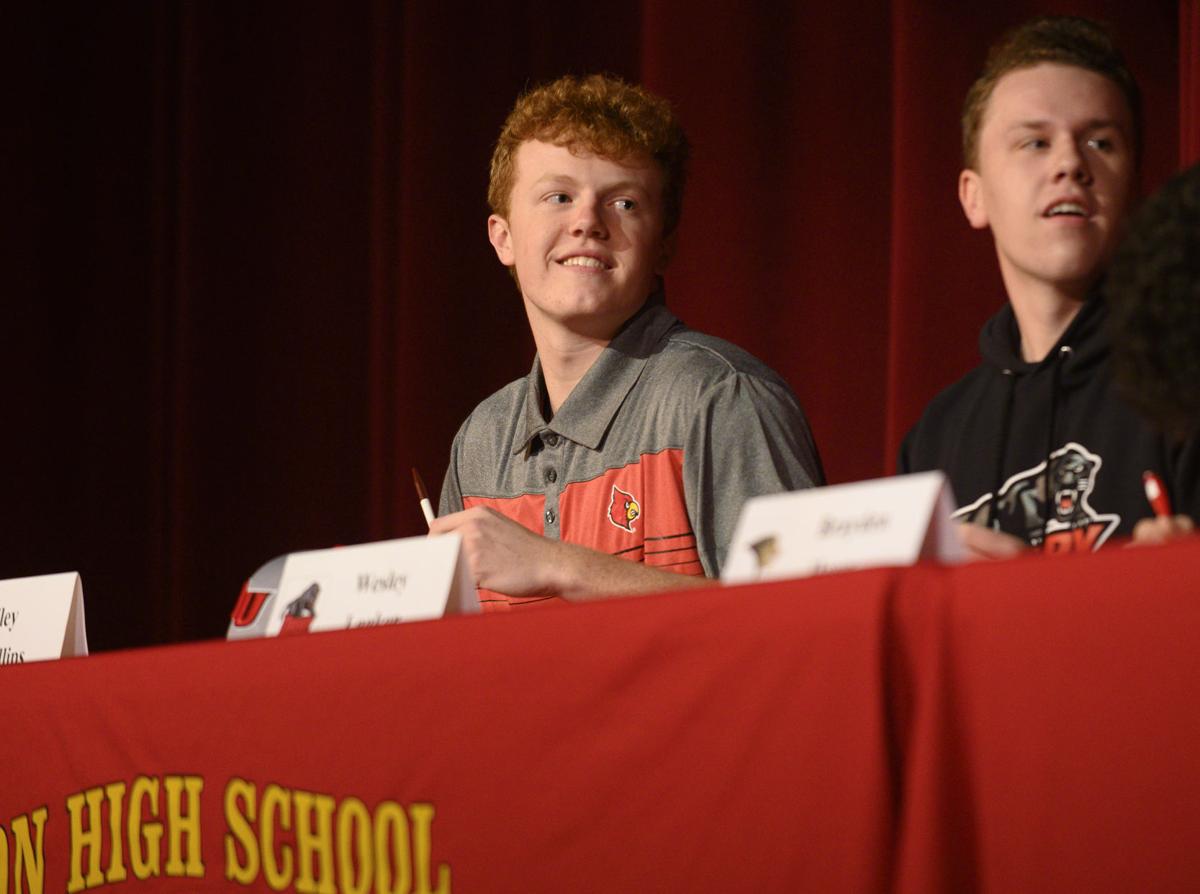 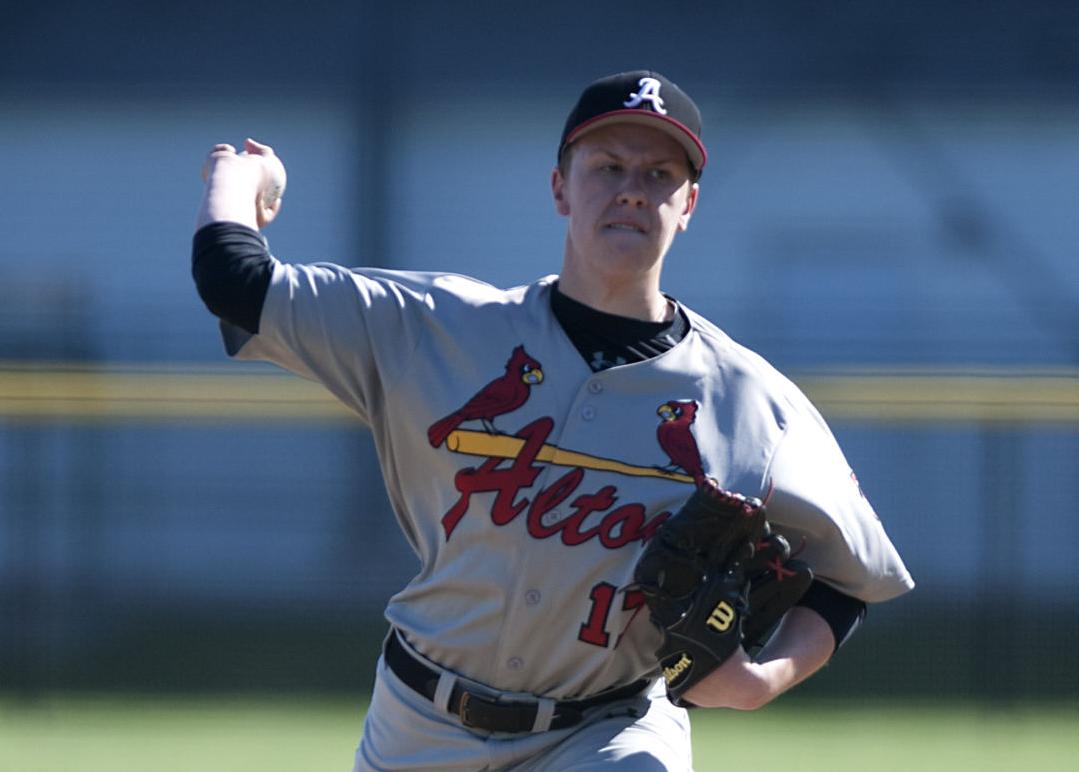 Alton's Wesley Laaker (17) delivers to the plate during a baseball game on Monday, May 7, 2018 in Belleville, Ill. Paul Halfacre | STLhighschoolsports.com

GODFREY — Riley Phillips wasn't rattled when his pen touched a simple piece of paper, a piece of paper that signified his college future.

Even though Phillips' nerves didn't crack — his first and second pens did.

But that didn't deter the 6-foot-4 left-handed pitcher, who found a third pen to sign the paper that made him an official University of Louisville baseball signee Wednesday morning at Alton High School.

"They really caught my attention because they're one of the top programs in the country," Phillips said. "They gave me a good offer and it was something I couldn't deny."

Louisville has made six College World Series appearances since 2007, including two of the last three seasons.

Phillips was one of three Alton baseball seniors who signed Wednesday. Wesley Laaker signed with Drury and Brayden Haug is headed for Lindenwood.

"It's a great opportunity for them," Alton coach Scott Harper said. "It's a testament to them, their skill set and what they've been able to accomplish in their high school career. I just joined them last year, so I'm just happy to be a part of it and continue to help them work towards that."

Phillips led the Redbirds last season in most offensive categories, including batting average (.365), RBI (33), slugging percentage (.654), home runs (four) and triples (five). He also posted a 4-3 pitching record with a 3.50 ERA and led the Redbirds with 67 strikeouts.

He was named second-team All-Southwestern Conference last year as an outfielder.

"Riley is just a great all-around player," Harper said. "We used him on the mound, at first base with that tall target. Also, with his athleticism, he covered a lot of ground out there in center field."

While he was an offensive threat as the No. 3 hole hitter for Alton last season and a standout in center field, Louisville signed him for the imposing presence he presents on the mound.

"I will soak (being a hitter) in one last time this season before I'll develop into a pitcher only there," Phillips said.

Having another all-conference player in Edwardsville's Drake Westcott joining him at Louisville didn't hurt.

"Drake and I have stayed close in the past couple of years and definitely had some influence on that decision," Phillips said.

For Laaker, Drury was a match made in heaven.

"They were one of the few that offered my major and they have a strong baseball program," Laaker said.  It was nice to find that kind of fit.

The 6-foot right-hander was limited last year as he dealt with a shoulder injury all season. After going through that, it put things into perspective for the prospective architecture major.

"It kind of made me see how much you take it for granted," Laaker said. "You realize just how much fun it is when you can contribute."

Haug, a former Westminster Wildcat who returned home to Alton, is hoping to turn the heartbreak he felt in last year's Missouri Class 4 championship game into a driving force.

"There was a lot of heartbreak coming in second," Haug said. "Nobody likes to lose. This year, our pitching core should be pretty good."

Haug picked Lindenwood over a myriad of other schools but is hoping for one last long postseason run at the high school level.

"My goal is to always win and be the best we can be as a team," Haug said.

After stumbling to a 14-win campaign last season and falling to eventual Class 4A state champion Edwardsville in a regional final, Harper is looking to rely on his three seniors to lead the way this year.

"We've just got to have everyone contributing and finding their roles and stepping up. It takes all of them," Harper said. "That's always our goal, to come out and compete every day and see what it falls at the end of the day. We want to prepare ourselves for the end of the season."

Alton's Wesley Laaker (17) delivers to the plate during a baseball game on Monday, May 7, 2018 in Belleville, Ill. Paul Halfacre | STLhighschoolsports.com