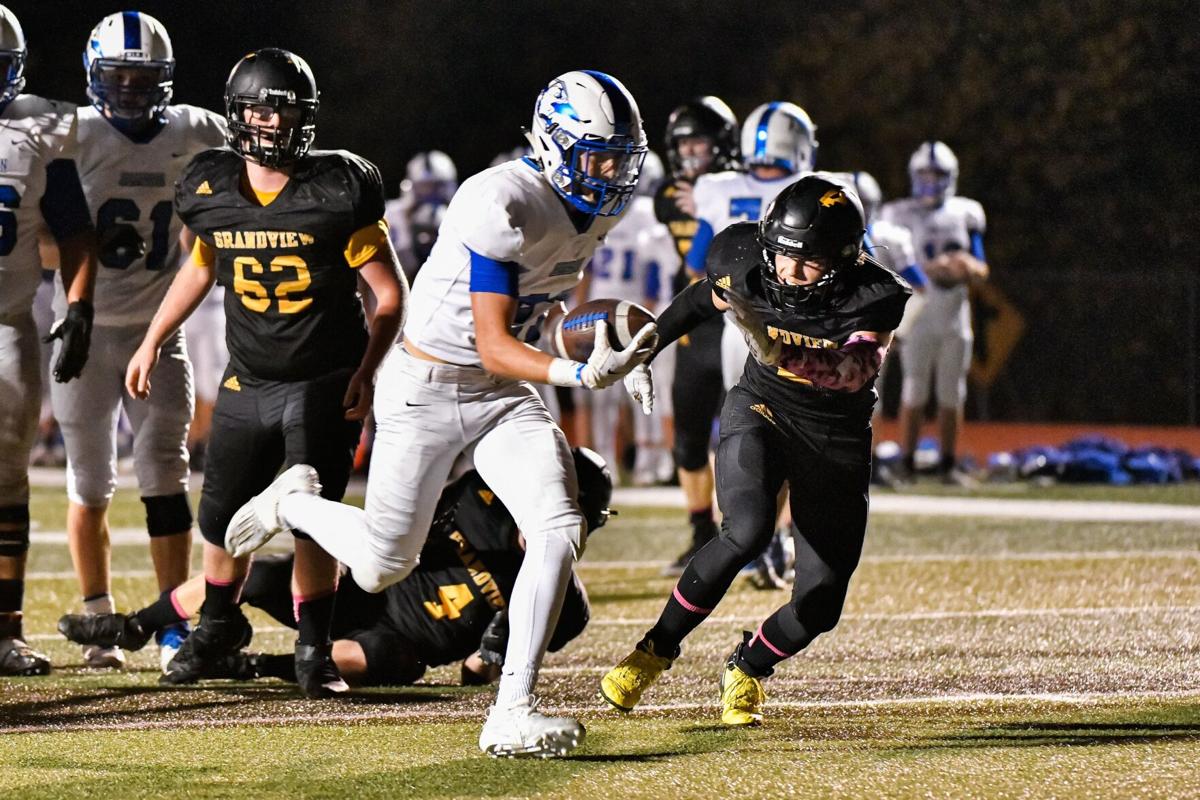 Jefferson Blue Jays senior Will Schnitzler (27) breaks through the line for a touchdown during a game played on Friday October 9, 2020 at Grandview High School in Hillsboro, Mo. Rick Ulreich, Special to STLhighschoolsports.com 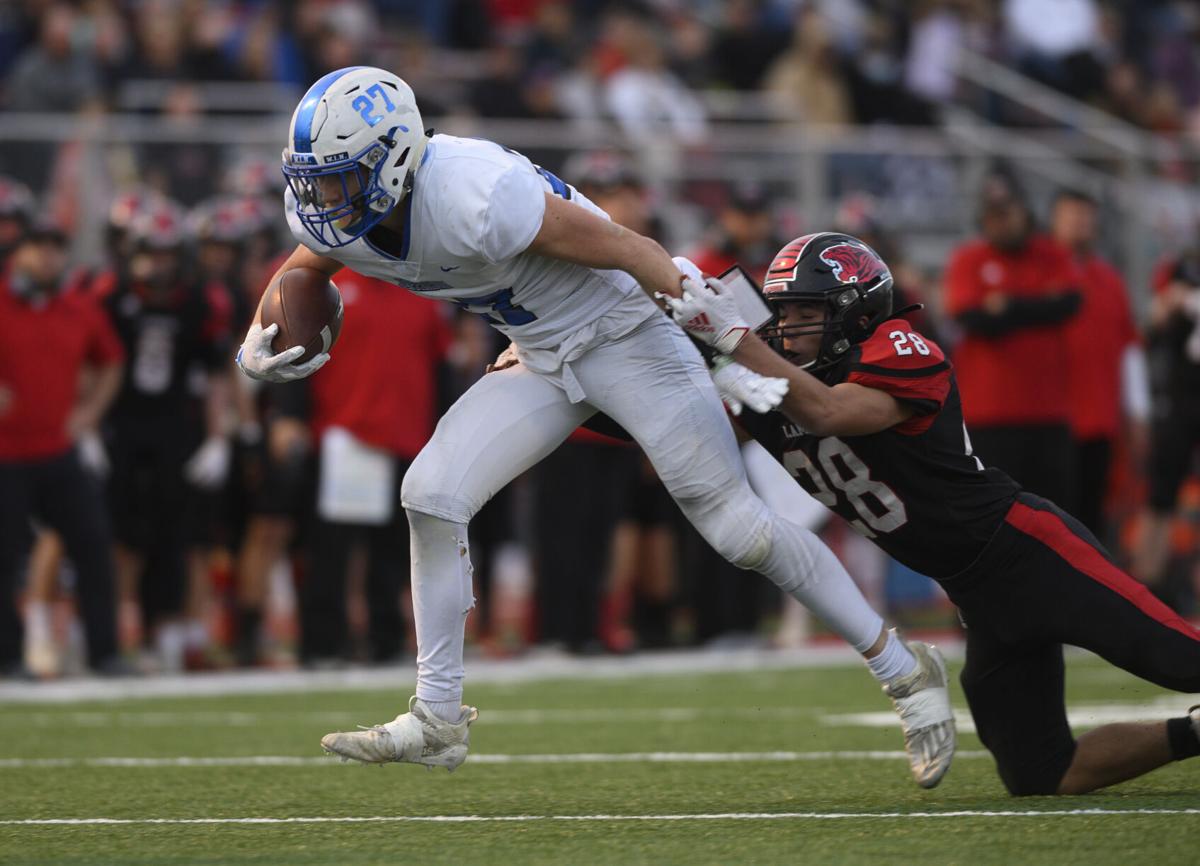 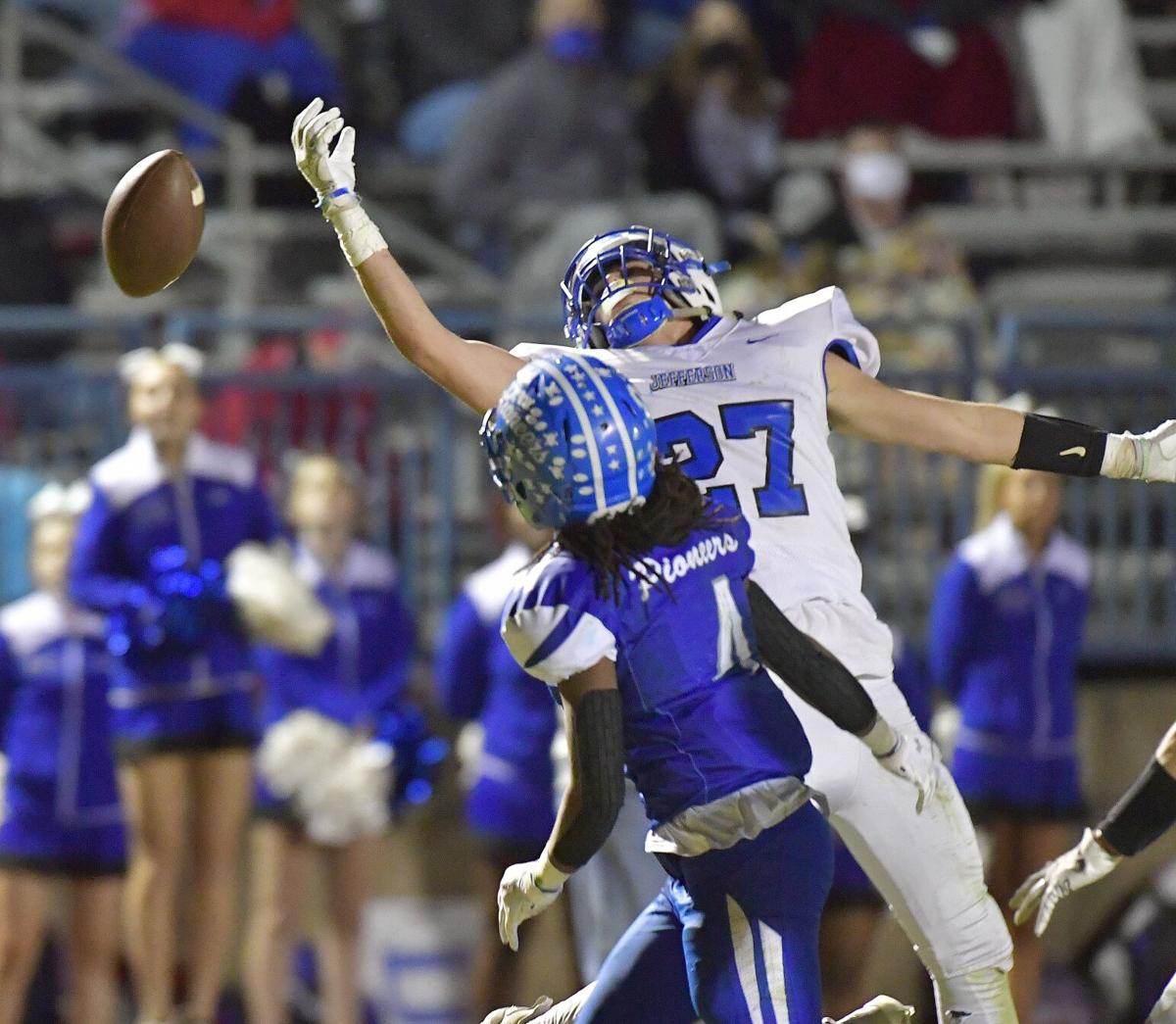 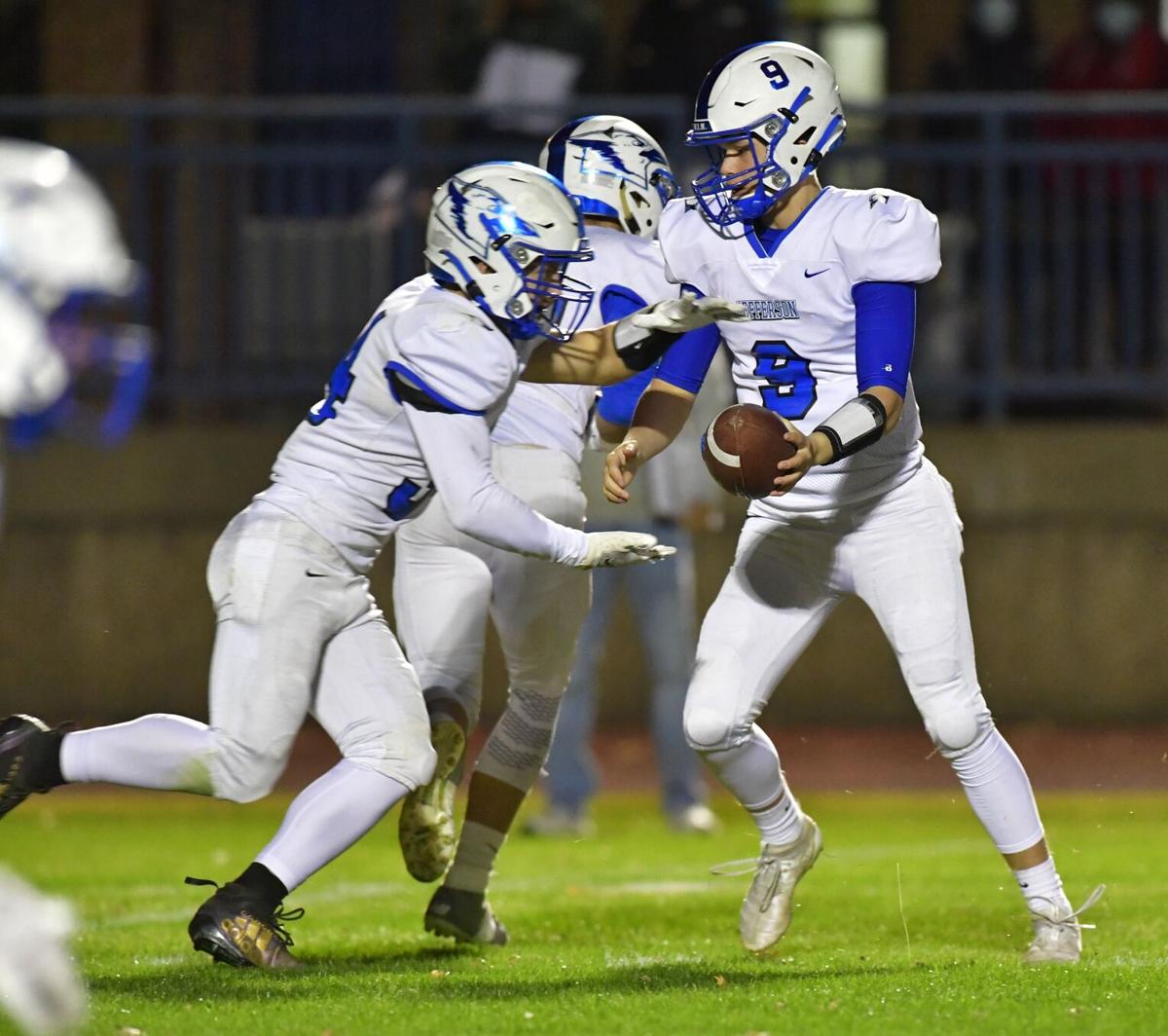 A senior running back and linebacker for the Jefferson High football team in Festus, Schnitzler heard what Alex Rouggly told him on the phone. He trusted Rouggly, Jefferson’s coach, but he just couldn’t believe it was real.

Any number of kids grow up dreaming of playing Division I football. Schnitzler, who’s 5-foot-8 and 175 pounds, was not one of them. He didn’t think he had the size to play at that level, so he never bothered getting his hopes up.

“Never in my life did I think I’d be going to play football at a Division I school,” Schnitzler said. “I never dreamed about it. I figured it was (Division II) tops.”

When Schnitzler’s side of the phone remained quiet, Rouggly checked his connection.

“You still there?” Rouggly asked.

Schnitzler, 18, found his voice and managed to beat back the urge to commit to the Redhawks on the spot.

Schnitzler made that commitment official Wednesday when he signed his binding national letter of intent to play at SEMO.

He wasn’t the only football player from Jefferson to sign on Wednesday. He wasn’t even the only Schnitzler.

“It was a sigh of relief,” Will said. “I’ve always wanted to play college football.”

Both Schnitzlers overcame numerous obstacles to reach Wednesday’s celebration. The coronavirus pandemic complicated matters for every senior high school athlete with college aspirations. The NCAA offered an extra year of eligibility to every athlete due to COVID-19. College recruiting is headed into uncharted territory, but that’s not what the Schnitzlers dealt with. Their hurdles were more traditional.

Will is 6-foot-2 and 185 pounds. He played in the defensive secondary at Jefferson but McKendree would like him to live in the weight room and plans to plug him in at inside linebacker.

Will, 18, is ready to put in the work because that’s what got him back on the football field after he cracked his spine.

He thinks he injured his back in the sixth game of his junior season against Valle Catholic. He’s not entirely sure if it was that game because he was knocked unconscious and suffered a concussion that night, too.

“That was a rough game for me,” Will said.

He sat out a week due to his concussion, but he said his body felt good enough to play so he finished out the football season. It wasn’t until he was playing for the Blue Jays basketball team and he went up for a rebound that his back became too much to bear.

Will wasn’t bumped, pushed or shoved. He didn’t get undercut. He landed on both feet, but something in his back went haywire and left him in significant pain. After a visit to the doctor and scans on his back it was revealed Will's spine was cracked in two places and he had bulging discs in his back.

“I couldn’t move very well,” Will said. “That pain was like no other.”

He was sidelined for the rest of basketball season. For a guy who plays multiple high-level sports, it was a completely different pain to be forced to sit still and slow down to let his back heal.

Will needed months of physical therapy. Turns out he had the time as COVID-19 wiped away the spring sports season.

Eventually Will healed enough to play baseball in the summer as he suited up for Festus Legion Post 253.

Did he return to the diamond and take an easy assignment, like left field?

He pulled on his catcher’s gear and crouched behind home plate.

Even when the sweat stings his eyes in the brutal summer sun, there is no place Will would rather be. Inspired by Yadier Molina, he can’t remember a time he didn’t want to be a catcher.

“I just like being part of the game,” he said. “Being a big part in every play is something I like.”

Will was a huge part of Jefferson’s football success this season. The Blue Jays went 9-3, won the first district championship in school history and played in the Class 2 state semifinals against eventual champion Lamar. Will rushed for 788 yards and scored 12 touchdowns at running back. He made 48 tackles and four interceptions at defensive back.

He was only able to do all of that by drilling down in his rehabilitation and embracing an extensive stretching routine that loosened up his back prior to every practice and game.

“I started taking that stuff more seriously,” Will said. “I felt stronger going into this football season. I felt confident in my body. I never thought twice about my back.”

Dylan watched as his cousin contorted himself into odd shapes before games. Whatever it took for Will to be out there with him, Dylan was all for it. Seeing his cousin sidelined was hard for Dylan.

“It was painful,” he said. “The fact it’s my cousin made it hard to see him go through that.”

On the field Dylan was a two-way standout for Jefferson. At running back he rushed for 1,170 yards, scored 21 touchdowns and was named an all-state first-team selection in Class 2, something he’s still wrapping his head around.

“I’ve always been one of the smallest ones out there,” Dylan said.

Defensively Dylan moved where the Blue Jays needed him. He started at free safety, then shifted to strong safety and when the coaches changed the defensive formation he wound up at outside linebacker. It was a significant change of responsibilities for Dylan, but he was ready for it. The coaching staff had given him bits and pieces of the linebacker’s role in their defense as a junior. When he officially made the move it wasn’t long before he had it figured.

“I’ve always paid attention to everything on the football field,” Dylan said. “It was fairly quick (I picked up the position).”

Before pledging to SEMO, Dylan considered joining his cousin at McKendree. He took the tour, visited admissions, the whole package. When it was all said and done, though, it wasn’t in the cards.

“I wanted to go with Will,” Dylan said. “We’re really close like brothers. It’s going to suck being away from each other.”

They’ll be close enough that seeing one another won’t be a burden. SEMO is about an hour away from Festus, McKendree just a little more. It won’t quite be like when they were babysat by their grandmother every day growing up, but neither will be far from the other’s heart.

“I’m proud of him and I’m happy for him,” Will said. “I’m going to miss seeing him every day.”

Jefferson Blue Jays senior Will Schnitzler (27) breaks through the line for a touchdown during a game played on Friday October 9, 2020 at Grandview High School in Hillsboro, Mo. Rick Ulreich, Special to STLhighschoolsports.com